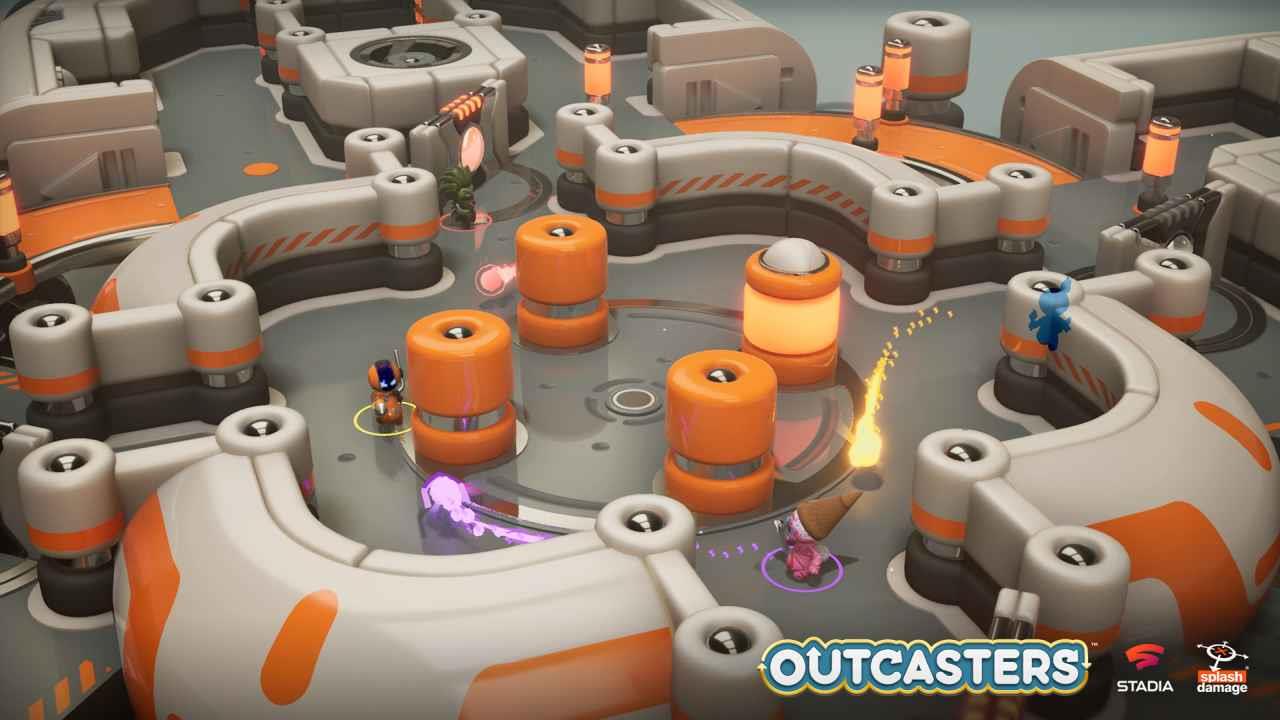 Stadia and development house Splash Damage hit one out of the park last week when they announced that the new team-based twin-stick shooter Outcasters would be free for Stadia Pro members. Outcasters was perhaps the most anticipated Stadia exclusive title, with fans clambering for the game every day on social media. So, when Stadia announced at its “Stadia Hangout” event last week that not only would the game release that day, but that it would be free for Pro members, the Stadia community went bonkers, leaping into Outcasters with gusto.

Since then, Outcasters’ servers have been full, allowing players to hop into online games with no trouble whatsoever. Longtime Stadia fans know that this is quite a coup, as many multiplayer games have struggled to maintain an audience with Stadia’s limited (but growing) player base. Outcasters wisely has a gang of AI controlled bots to fill in when player count is low, but you would have to log in pretty late at night to see them appear. Outcasters might be the healthiest game released on Stadia yet.

But all of the enthusiasm of the Stadia fanbase begs the question: Would Outcasters be a big deal if it were released on another platform? If Outcasters showed up on PlayStation Plus or Xbox Game Pass, would it receive a proportionate amount of adoration from the gaming fan base as a whole?

And the answer is…yeah…I kinda think it would. 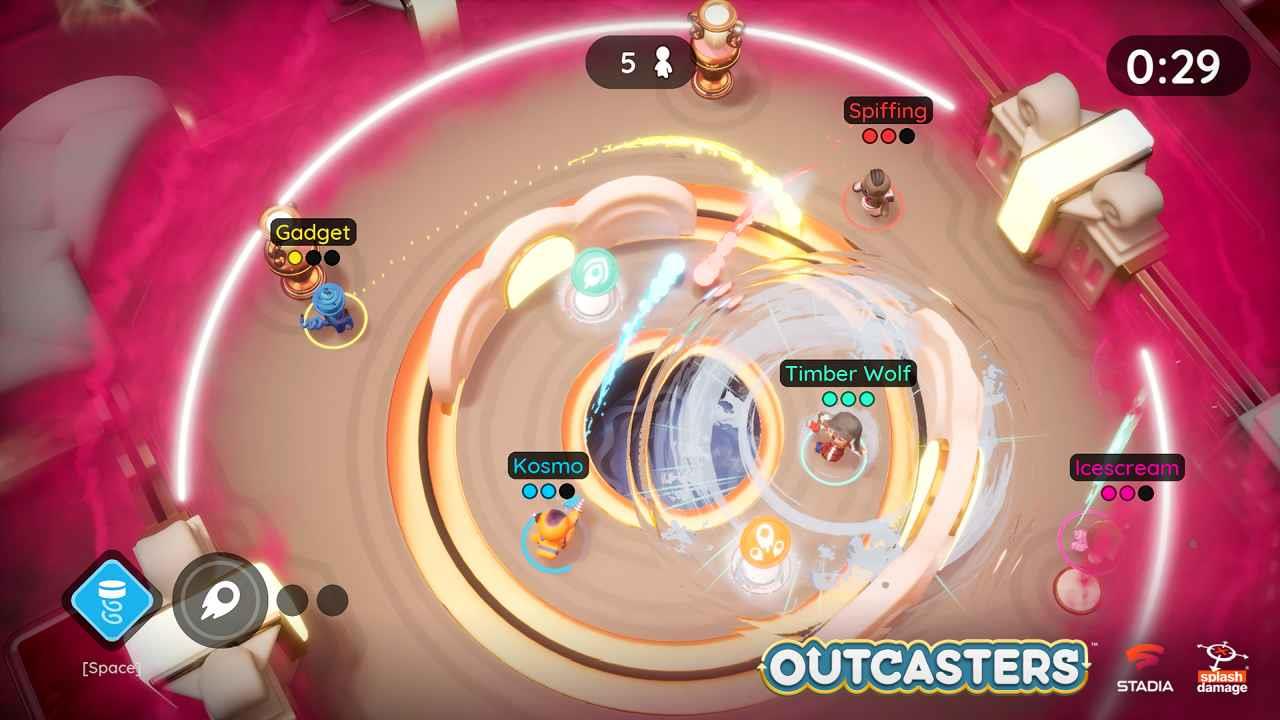 Regardless of the platform, Outcasters is a winner. This is the sort of game that is primed to massage players’ dopamine pumps, delivering fun and fast gameplay and a metric ton of customizable unlockables. Showing up on release day polished and ready to roll, Outcasters feels slick and attractive, with catchy music keeping player’s heads bobbing and fantastic character designs that are able to be mixed and matched to the point of being unrecognizable. This is one of those games that is easy to pick up but deep enough to hold your attention, and the short match times keep the “one more try” buzz constant and relentless. Outcasters might not be big budget, but it certainly doesn’t feel cheap.

Matches are played on an array of isometric maps. Eight players pop in and start taking pot shots at each other. Character movement is handled with the left analog stick. The right stick aims your shots like a standard dual stick shooter, but after the shot is fired, players can still control the trajectory. This means that you can shoot at someone, and if they duck around a corner, you can bend your shot to chase after them. It takes a few rounds to get the hang of this mechanic – and I sometimes still regress into button mashing when quarters get tight. But many players have become absolutely deadly, brutally whipping projectiles around teammates to hit opponents. 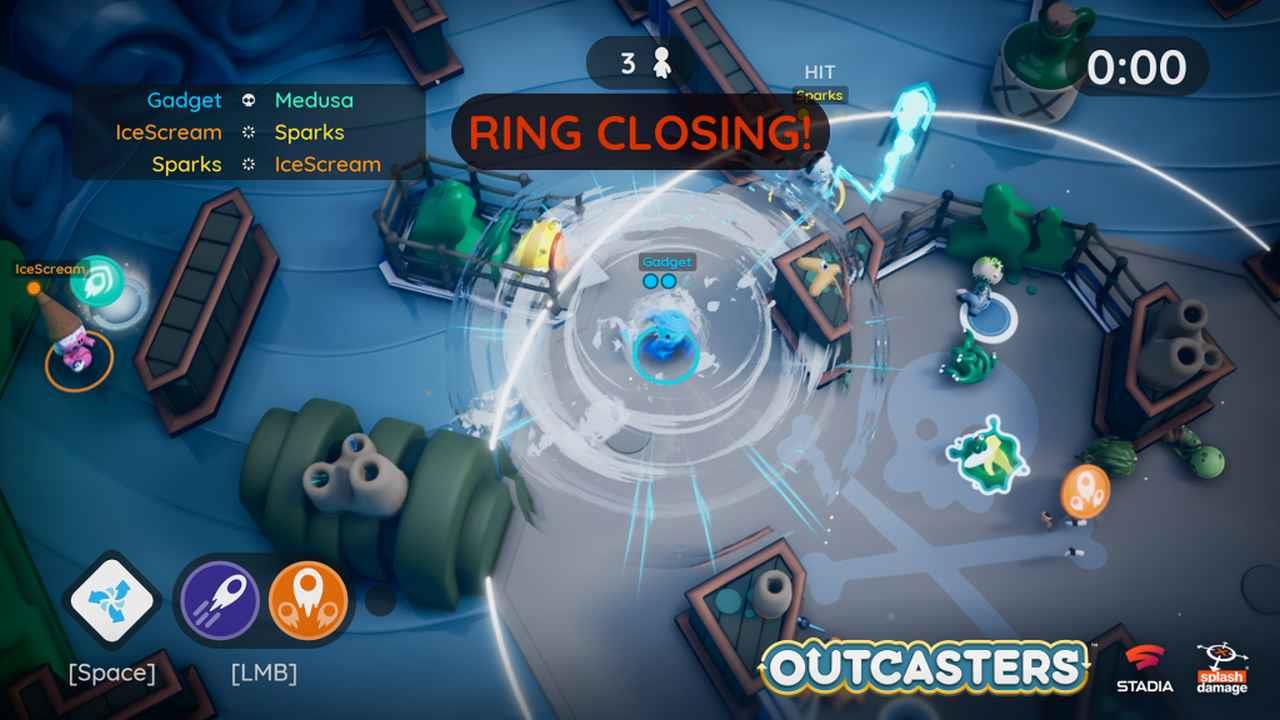 Another interesting mechanic is the ability to counter-shoot, taking out someone’s shot with one of your own. I’ve been in small rooms with opponents, both of us desperately trying to take each other down, instead simultaneously countering each other over and over again. It’s hilarious and heart-stopping.

A variety of pick-ups spawn around the map that give players special powers – stuff like bouncing shots off of walls, or having projectiles explode into a triple shot. You can stack up to three of these powers, allowing for some pretty stellar moments. For example, if you stack the piercing power (which can shoot through dudes and keep going) with the bouncing power, you can shoot someone, bounce your shot off the wall, and hit another. This makes people mad, which in turn makes me laugh. 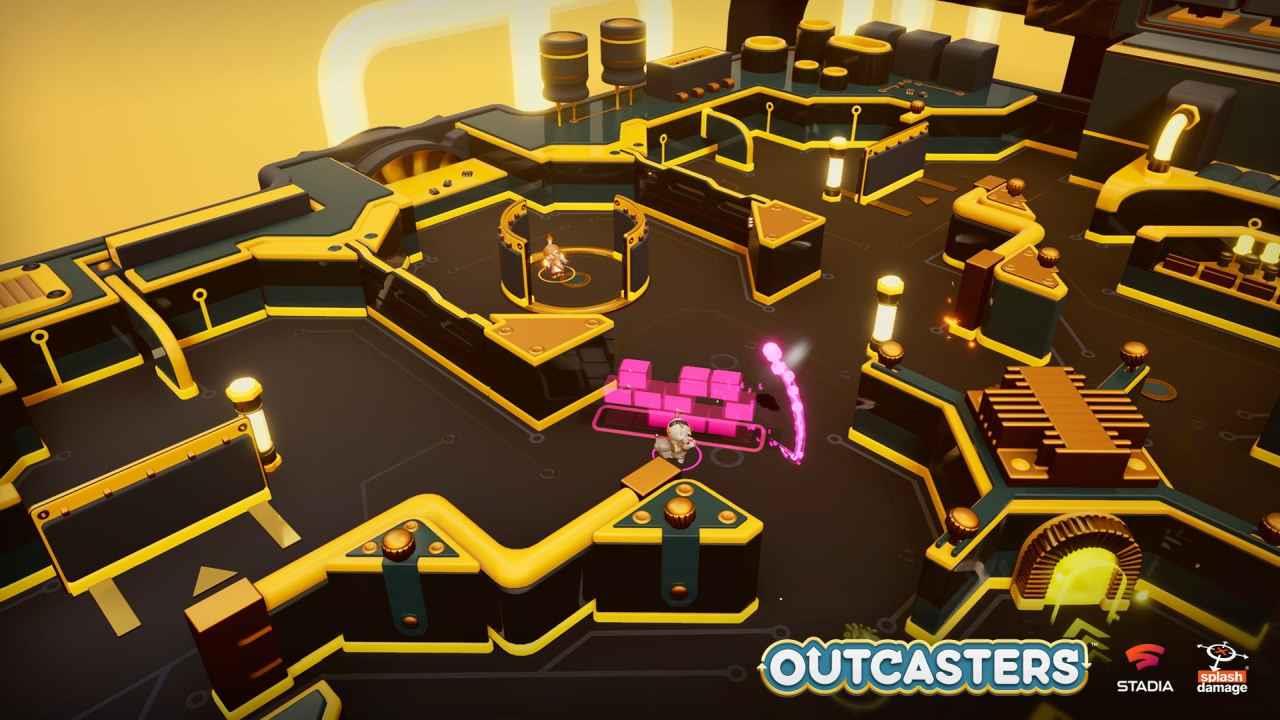 There are three match types – which reveals both Outcasters’ limited scope and the game’s greatest opportunity for growth. Last Caster Standing is a free-for-all, with players gunning each other down in an effort outlast everyone else. Sometimes over in a matter of seconds, this mode plays like a miniature battle royale, complete with a circle that closes on players after a bit of time has gone by. A team death match mode is just what it sounds like, with two teams of four racing to be the first to ten kills.

But the best mode is Gold Rush – the weird twist on Capture the Flag that brings me to tears of laughter almost every time I play it. In Gold Rush, the map is littered with coins. Players run around and grab as many coins as they can, keeping an eye out for opponents while they do. Every now and then, an area randomly opens on the map that is labelled “Bank”. Players rush to that point, vying for control, as owning the bank allows you to “deposit” your coins. If a player from the other team challenges the point, your deposits stop. This usually leads to frantic shoot-outs, with control swinging wildly from one team to the other while points relentless rack up. Gold Rush is a ton of fun, and really speaks to Outcasters’ potential for additional interesting and creative modes to be added over time. With only three fairly simple modes, Outcasters has plenty of room to expand. 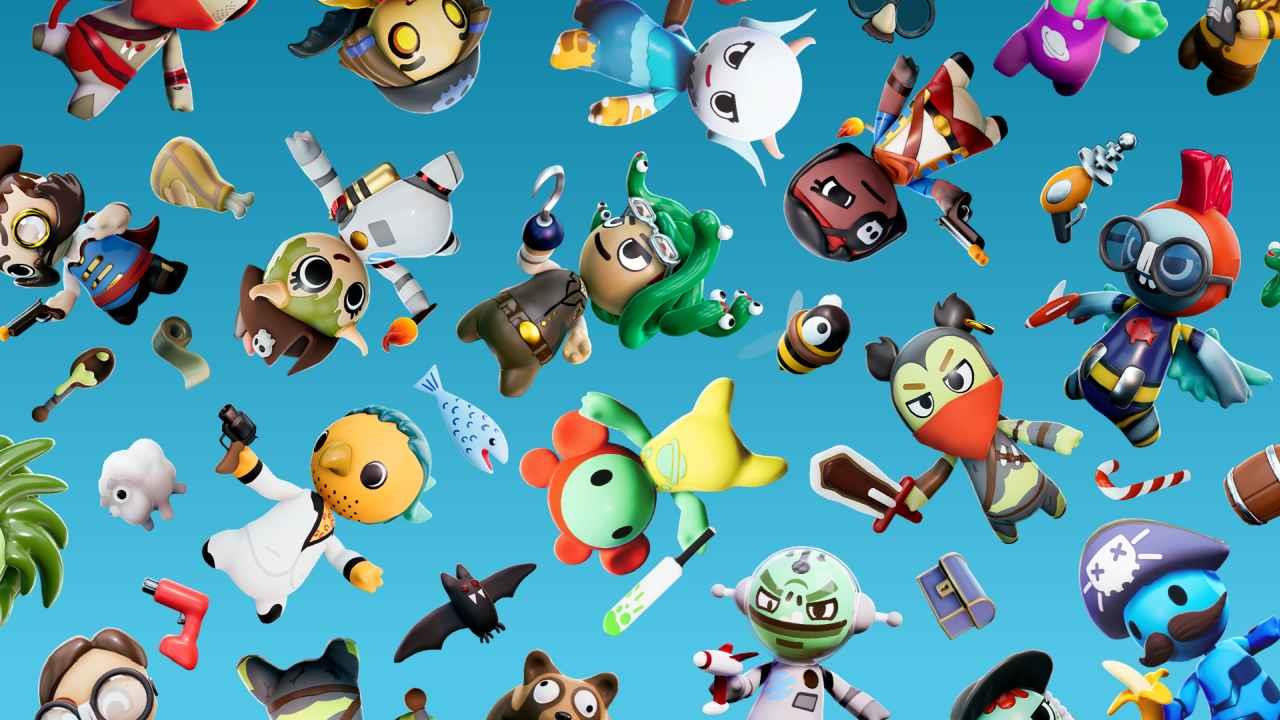 The gameplay in Outcasters is fast and fun, but the icing on the cake are the fantastic collectable characters. Each character is assembled from probably ten different parts – eyes, hair, hats, backpacks, shoes, weapons; the list goes on and on. Players complete weekly and daily tasks for tickets, which can then be used to purchase new piece/parts to add to your collection. You can either continue buying parts to create one complete character before moving on to another, or skip around and assemble an unholy freak. The more you buy, the more themed characters you can unlock – with some truly inspired stuff to work towards.

Everybody starts off with the same pink ice-cream-themed weirdo, but before long, characters devolve into an insane menagerie of pieces and parts, allowing players to Frankenstein their little squishballs into literally millions of possible combinations. The character collection dynamic goes beyond “fun distraction” and veers closer to “possible obsession”. Character parts even arrive with a fun animation depicting the opening of a collectable box – like something you would find on the clearance shelf at Gamestop. 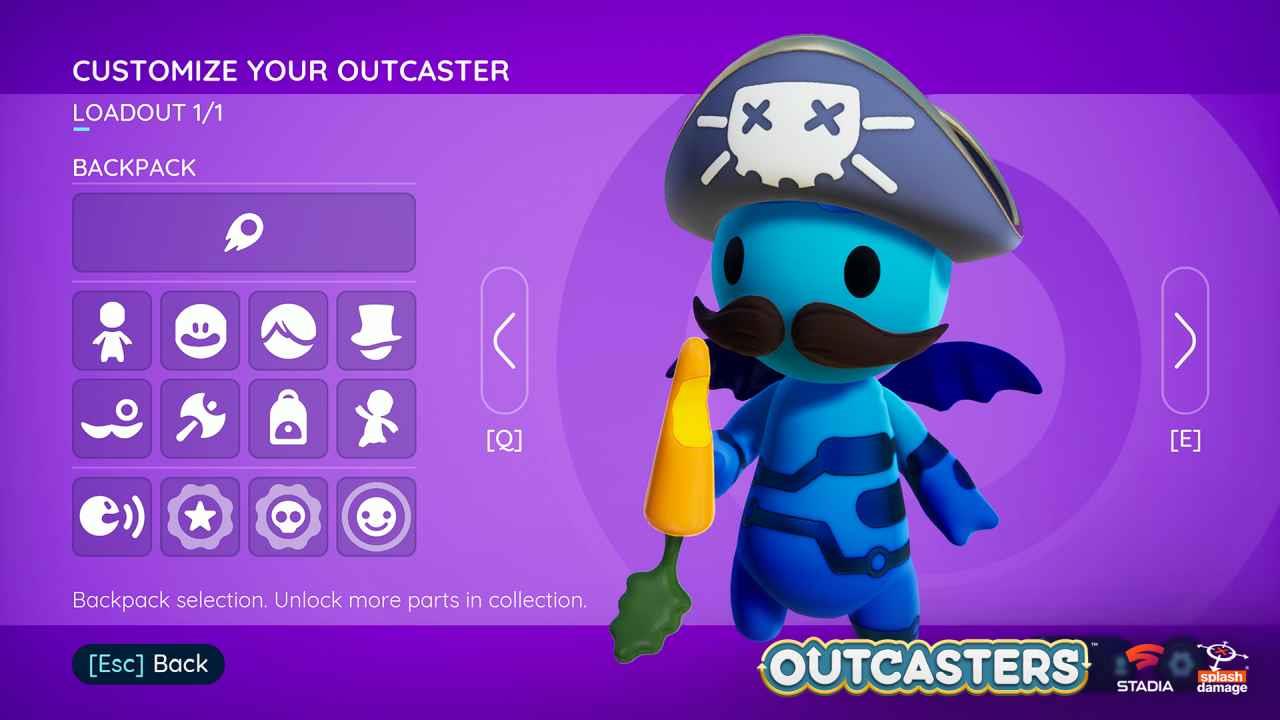 I’ve settled into a nice pattern of running through a few matches at night and then unlocking a few character parts with the tickets I’ve won. It’s a lot of fun, and its nice to have a game on Stadia that you can just dip in and out of like this.

Outcasters isn’t exactly what one pictures when thinking about “competitive shooters”, but it does fill that void on Stadia in an interesting way. There is a market for fun, fast, simple games that has become more prevalent this year, and Outcasters fits the bill surprisingly well. Sure, the game would maybe gain a wider audience on other platforms, but that’s the point of exclusives, right? Keep the good stuff for yourself, and people will come. I could certainly see people showing up on Stadia to try out Outcasters.

Outcasters is fun, fast, and easy to pick up. A shot-curving mechanic pushes the gameplay in interesting directions, allowing for unexpected levels of strategy. Though the number of modes is currently limited, the modes that are included are quite fun - and there is always room for expansion. The character collection aspect of the game is surprisingly deep and addictive.