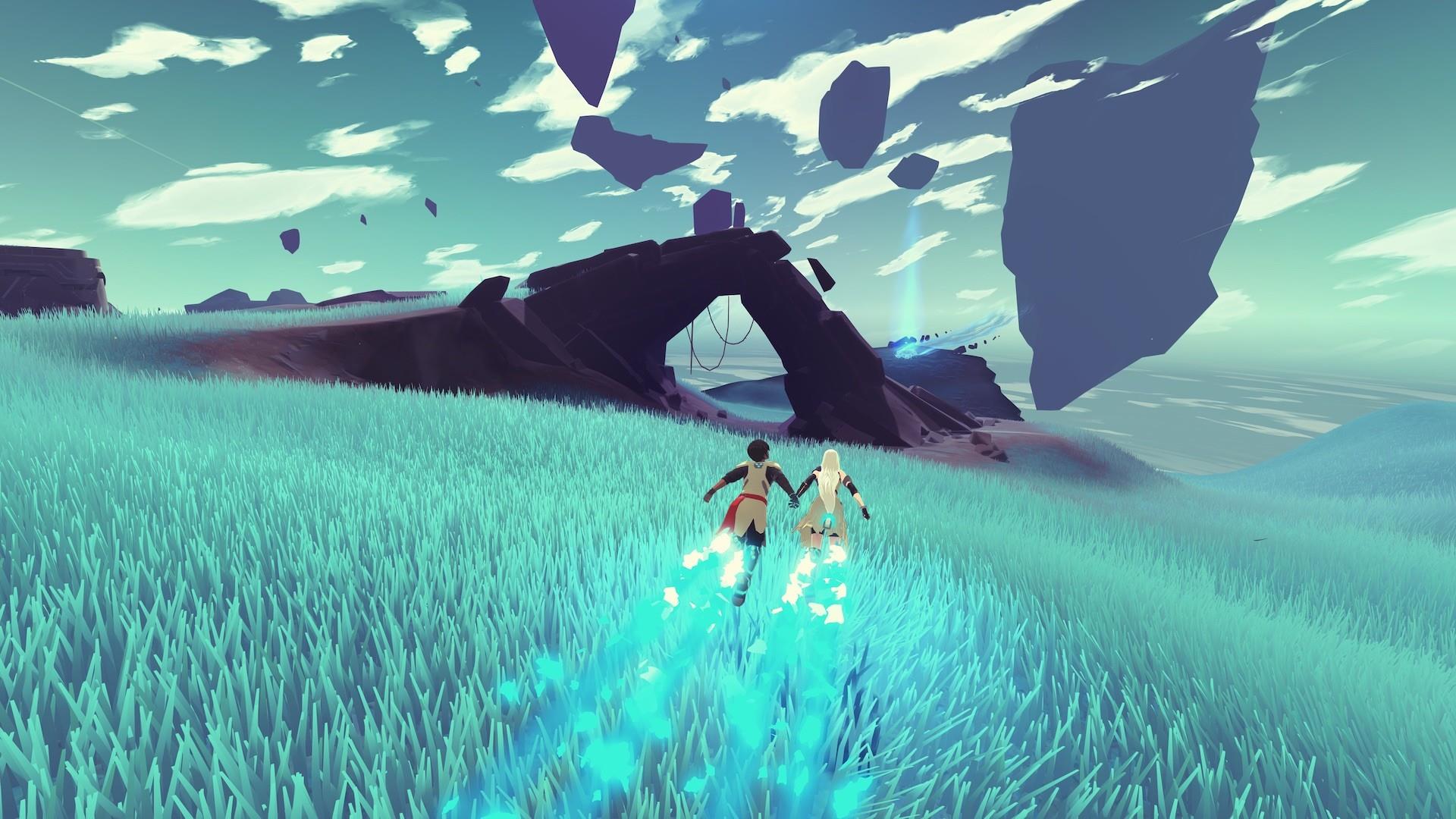 Haven made me go to bed with my wife

I could already tell I was trying too hard. I hadn’t even fired up Haven and I wanted to like the game so badly that I was doing nothing except setting myself up for disappointment. It felt like the start of an abusive relationship.

But Haven is anything but. The watercolor mating dance between these two star-crossed lovers, right from the drum n’ bass intro, is showing me a rare vision of video gaming. The main menu is simply them in an effortless embrace, purple grasses blowing in the wind around them, and an elated ‘80s synth pop soundtrack that is blowing my mind. 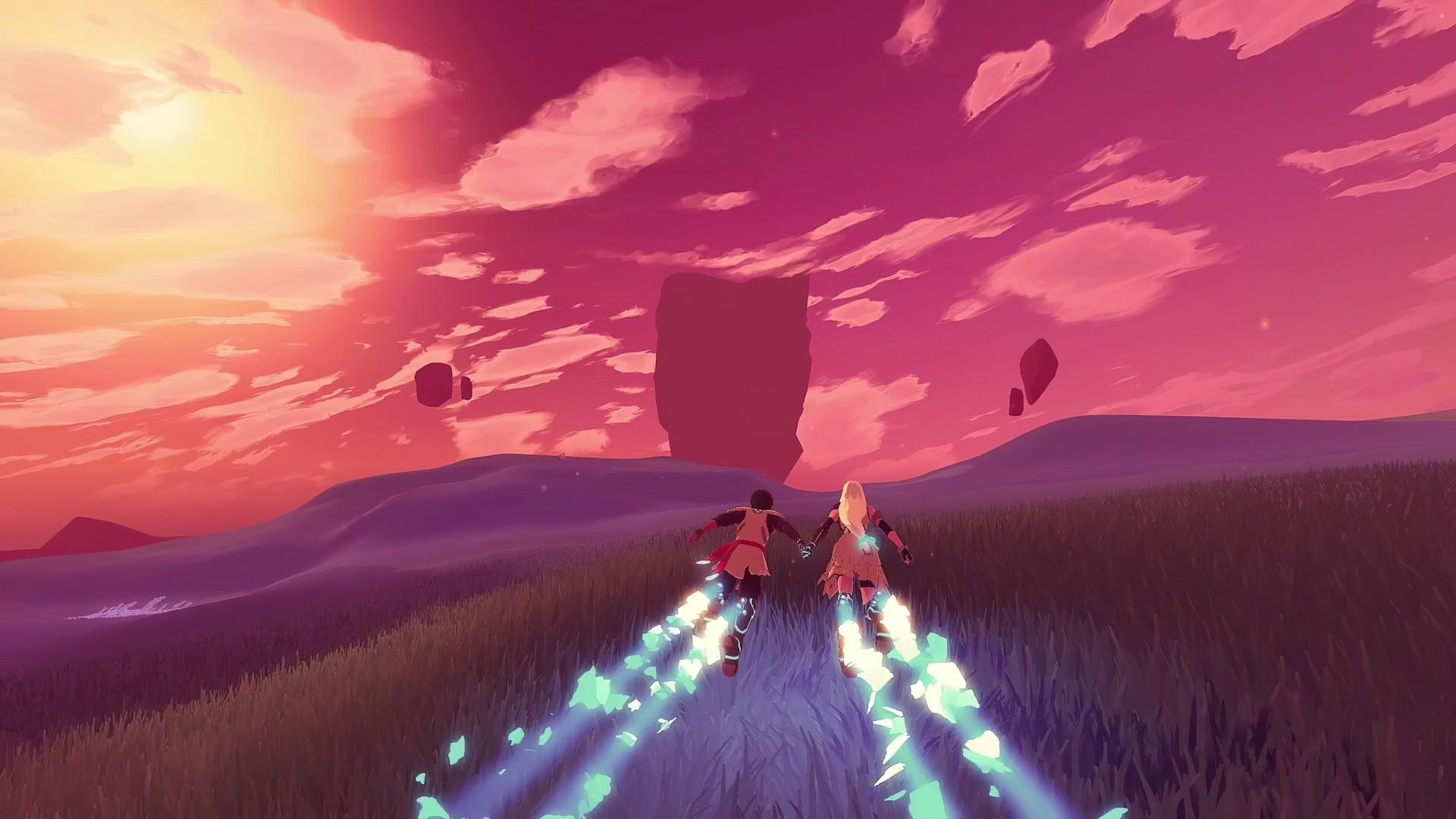 Haven fills its hours with so many wonderful and wonderfully droll aspects of being in a growing and meaningful relationship: getting tired of prepping the same old meals, touch-and-go conversations about ex-partners, coming up with a perfect band name for your life right now, and lovingly admiring the semi-nudity of your significant other. I knew Haven was working on a different level when, instead of my usual routine of staying up past my bedtime to play video games, I shut the game down and went to bed with my wife. It took a game to remind me that, hey, spooning is nice.

Navigating Haven can be as vague as navigating a relationship. The cubist nature of the map is only as helpful as a telephone dial pad, as far as getting around is concerned. The game would love for me to simply glide my way to comprehension among these teal and magenta landscapes--but the landscapes aren’t the most distinguishable brush strokes on the canvas. The swooping islands are impressionistic vacation spots, more like ideas or memories of a landscape than any real place to learn about. I’m not so much gliding over these islands as I am glossing over them. 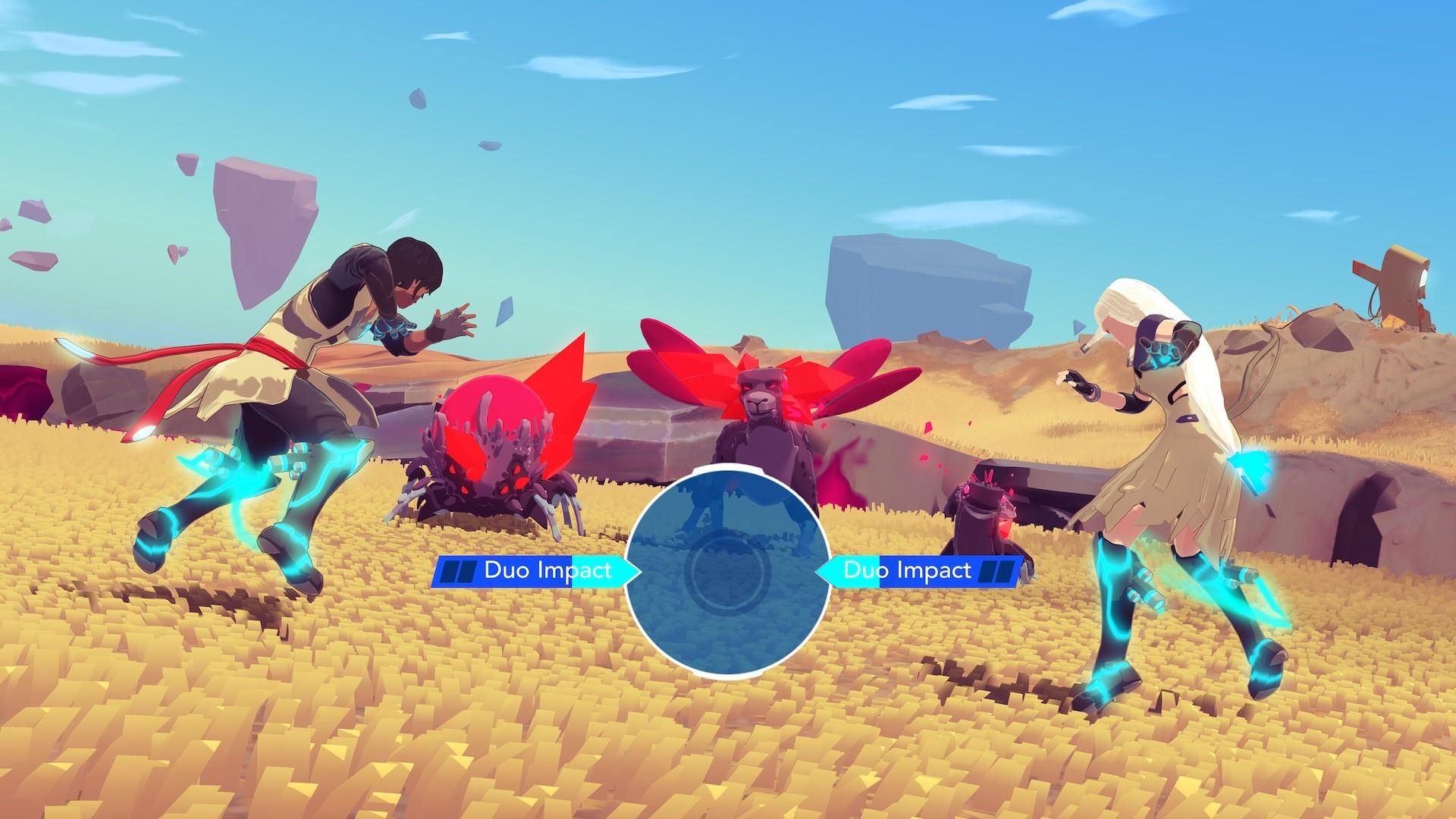 My stats go up, but I don’t pick which ones, or when it happens. I gain new combat and gliding skills, but I don’t get to pick those either. If this was an old school role-playing game then I’d be concerned. Instead, my stats and abilities just sort of pick themselves at a leisurely pace, typically after a celebratory glass of applebrew and a cozy snuggling session.

The wonderful part of the Nest--which is Yu and Kay’s spaceship, their home away from home--is how they do turn every space into a cozy space. Even spaces in your own home that wouldn't necessarily feel cozy at first. Like leaning against the counter between the fridge and the sink when it’s time for a drink. Or feet up on the round table between the chaise longue and the gear upgrade station. Maybe Yu and Kay find a spot in the cockpit staring out at the landscape with the hologram globe floating between. If you and your partner can make every part of your living quarters actually feel like home, then feng shui doesn’t matter, things that spark joy don’t matter, wall hangings that say Live, Laugh, Love don’t matter. What matters is each other. 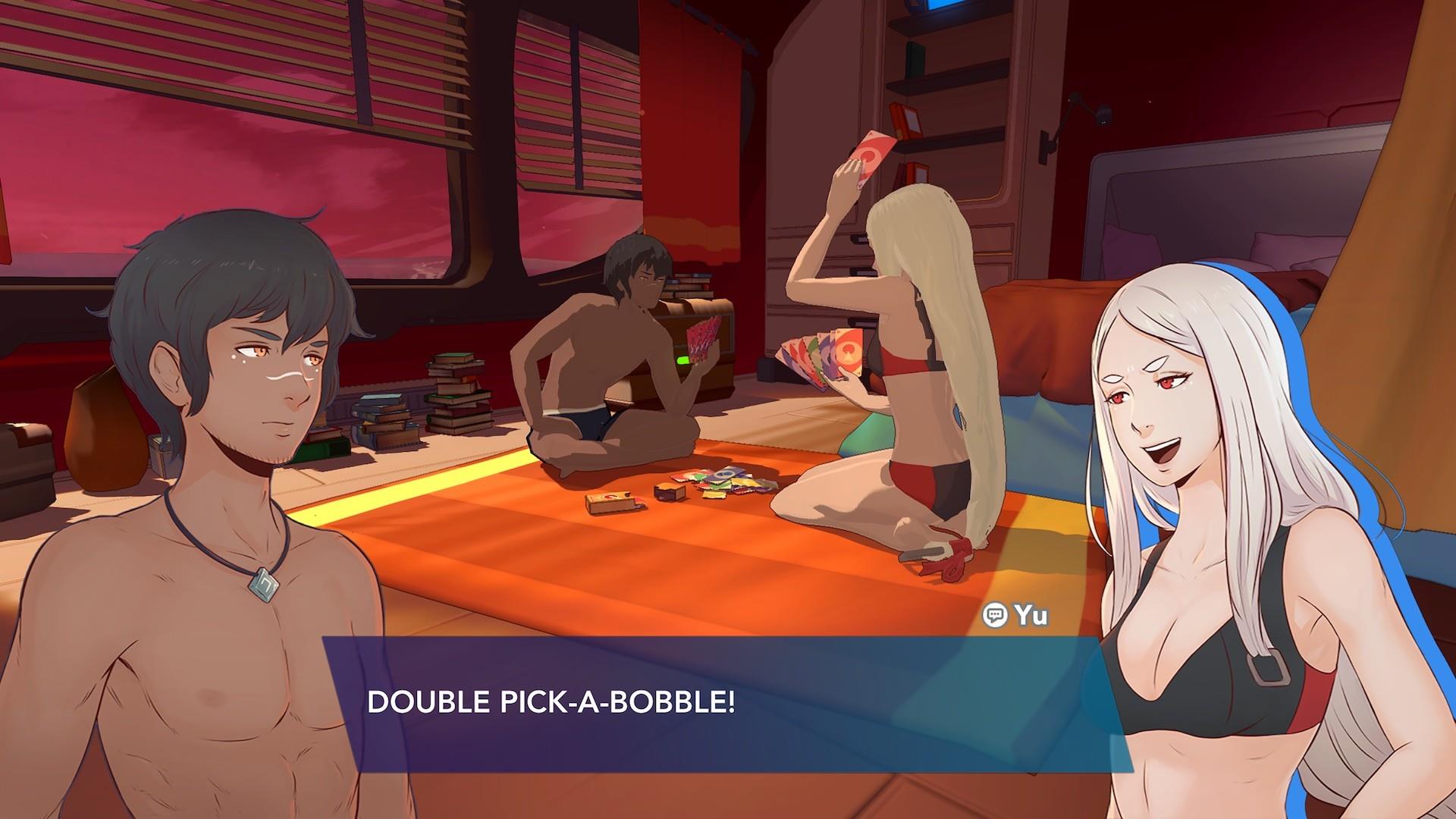 That’s what it comes down to for our wayward protagonists, our two love birds. Since they don’t have those home comforts, they have to make the Nest their home together. Moving into a new living space with another person requires a lot of kindhearted negotiation--a kindhearted negotiation I didn’t have when I first moved in with my newly wedded wife.

Just after our wedding, I’d brought along my fair share of furniture and decorations into our first apartment together. So had she. Our tastes didn’t necessarily mesh. She was all English countryside. I was all modern oriental. I quickly got the TV and Xbox running in the living room (priorities), followed by the placement of Asian-styled lamps, Asian-styled wall hangings, and Asian-styled couch and coffee table. 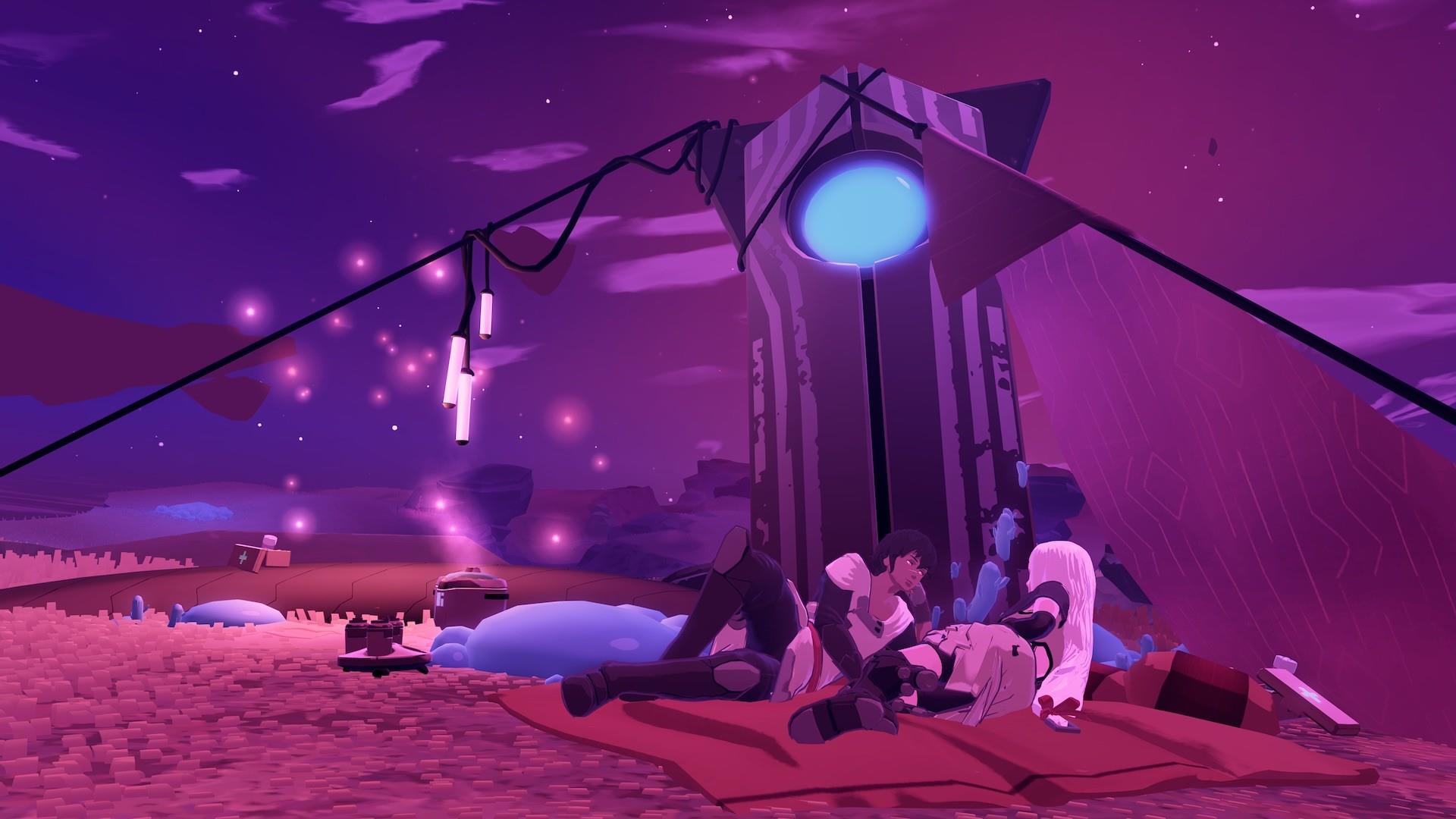 The problem wasn’t the Asian-styled anything. It’s that I’d not left any space for her things to decorate the living room. Not her gold-rimmed china, not her tea cozies, not her woodcut maps of Germanic territories or watercolor beach paintings. No, our décor didn’t go well together, but that wasn’t the point. I’d simply built up a nest for myself, not a nest for the two of us. I was unfair. She let me know it.

Yu and Kay don’t have this problem. All the things they own are still very practical. There’s little in the way of decoration--nothing English countryside or modern Asian. It’s just them. They are the decor. And since there’s no problem leaning against this item or sprawling across that item, they don’t have eyes for any hashtagged expressions hanging on the walls, or spring and summer catalogs to address that sparse location of the room. They don’t have eyes for those things. Only eyes for each other. Awwww. 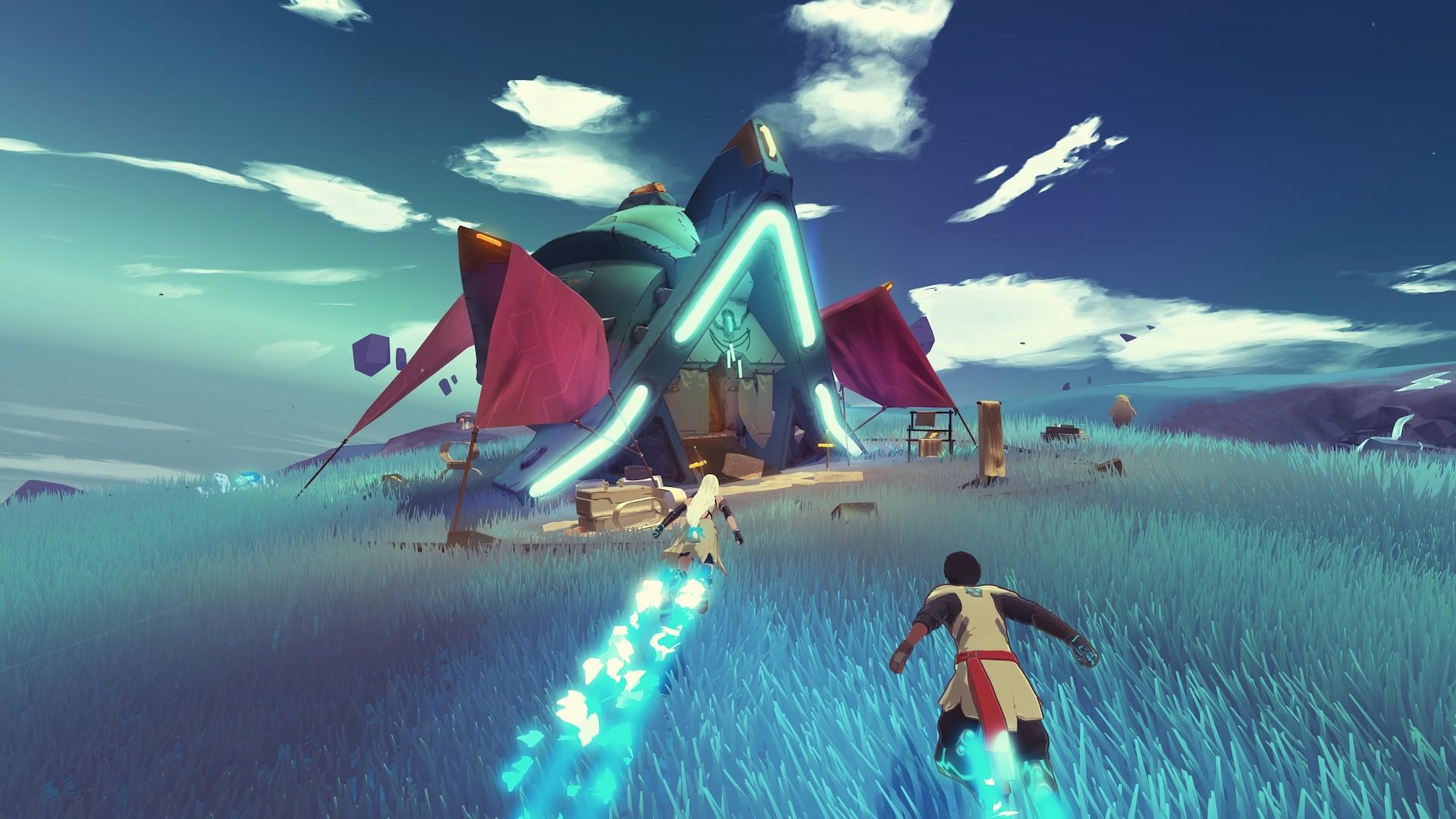 It helps that they’re both easy on the eyes, too. Yu has a sweet smile and blonde hair like a sheaf of wheat. Kay has skin that welcomes the sun and shoulders just broad enough to welcome Yu into a snug. Both cut a wonderful silhouette whether strolling or drifting over the breezy grasses of this shard-broken land.

I’d mentioned the Nest first because it’s what I love most about these two. It’s their getaway car. Then it’s their temporary dwelling. Then it’s their do-it-yourself project. This is their travel camper, and they’re a couple that’s taking this show on the road. But their time together, in and out of the Nest, is going to draw upon their surprisingly extensive knowledge of biology and engineering to get it into that state. The stars are their destination. But until then, these islands are their new neighborhood, and they’re getting to know their neighbors. 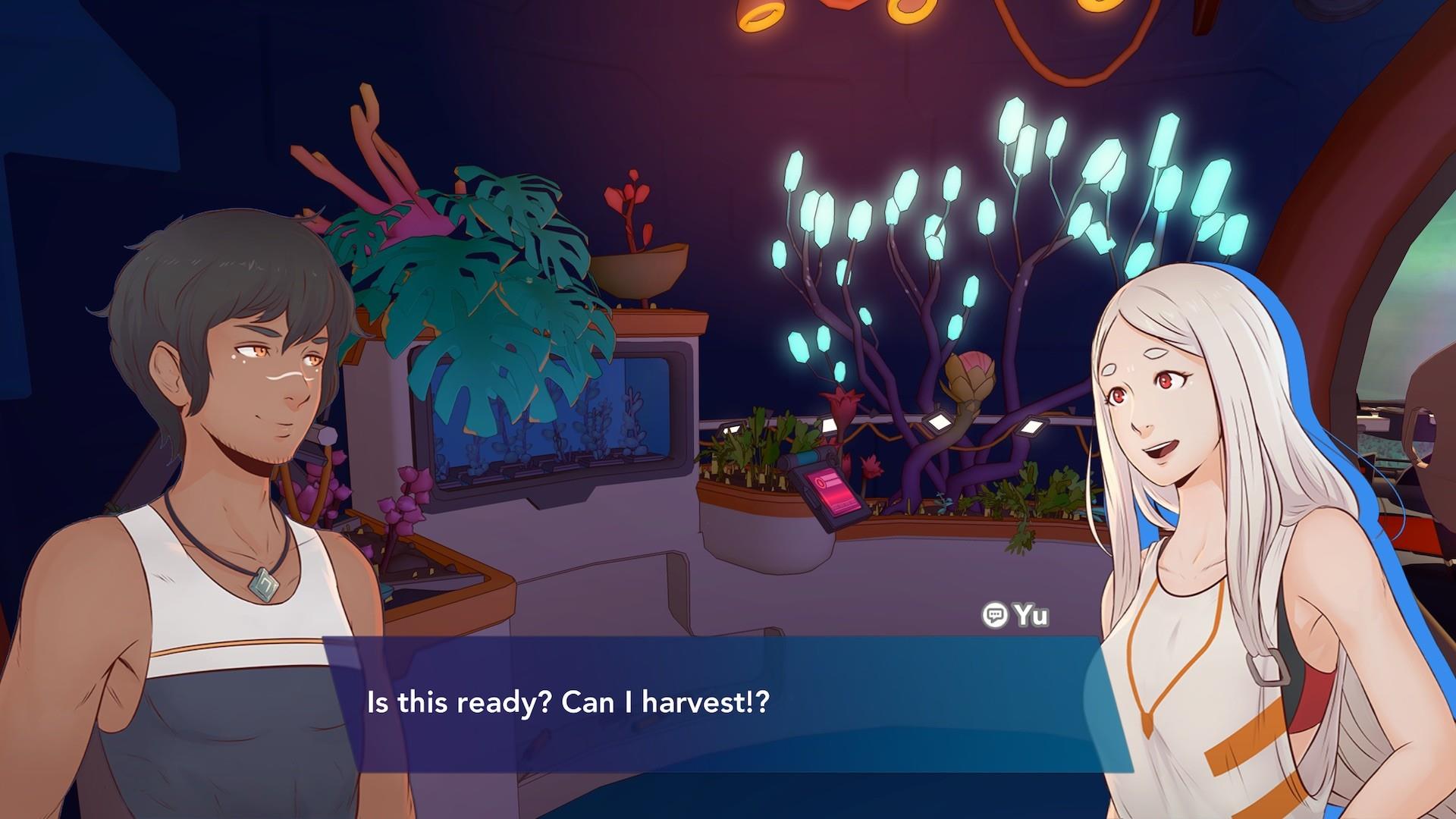 At first, they’re inextricably tied to this scattered and seemingly abandoned island colony, established by the very people (their parents) that they’re running away from. Which is a reasonable excuse to run away, when Haven’s version of Tinder has lapsed society back into relationship-making algorithms and arranged marriages. It’s medieval sci-fi. It’s a time and place where your choices and who you love don’t matter, and that taking a chance on someone you might like--rather than being stuck with someone you’ve never met--is worth the risk of abandoning your society and familial ties. Relationships are lab-grown, and love is boiled in a beaker over a Bunsen burner and reduced to scientific method.

Haven captures Yu and Kay’s early stages of a relationship wonderfully. The part where mostly what you’d like to do is make out, sure. But also the part where two people can, with genuine interest, learn about another person and how that person can fit into their own dreams, ambitions, goals (life), and, for the most part, be okay when finding out which points don’t exactly coalesce with whatever full-blown fiction they’d created in their own minds about who they’d like to spend the rest of their lives with. 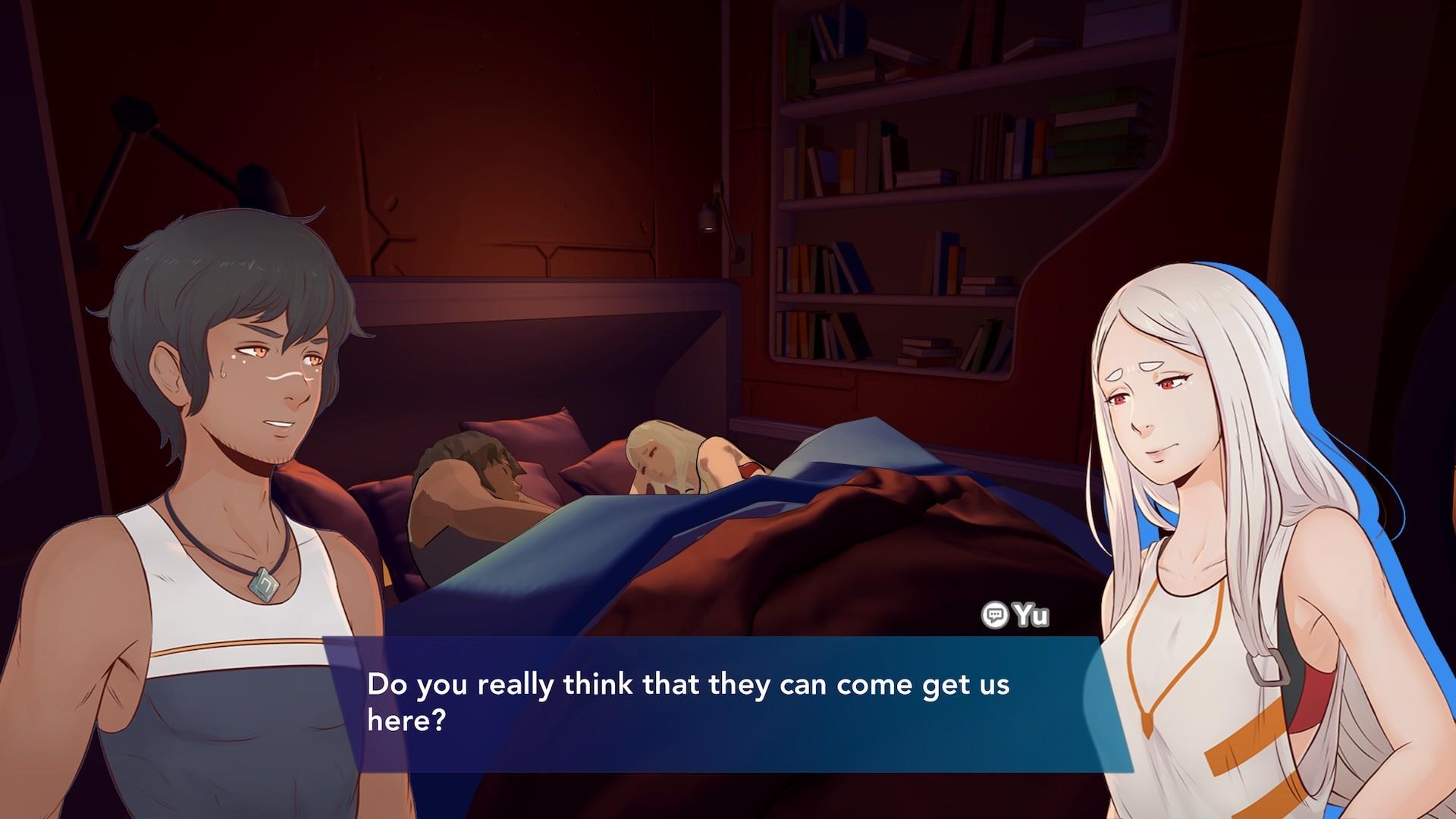 But they’re always together. You, the player, may travel as a free-roaming vapor (invisible, drone-like) through their domicile, but you will always see Yu and Kay inside of each other’s atmosphere. Not that they’re constantly clenched together. They simply take turns being the Moon to each other’s Earth.

And I’ve just demonstrated one of the only “problems” with Haven: it makes you come up with overly artful metaphors to describe an otherwise straightforward adventure RPG-lite. I’m not dying to get back into their world. I do appreciate what they’ve done for mine, however. Haven made me appreciate my wife’s needs more. Her need to wake up early and take pictures of the sunrise. Her need to point out Orion’s belt at night. Her appreciation for a cup of English Breakfast before bedtime. Her cat lying on her chest when she’s reading a library book on the couch. While I was over here playing games about making a ship into a nest, my wife made a house into a home. Our marriage has only gotten cozier from it.