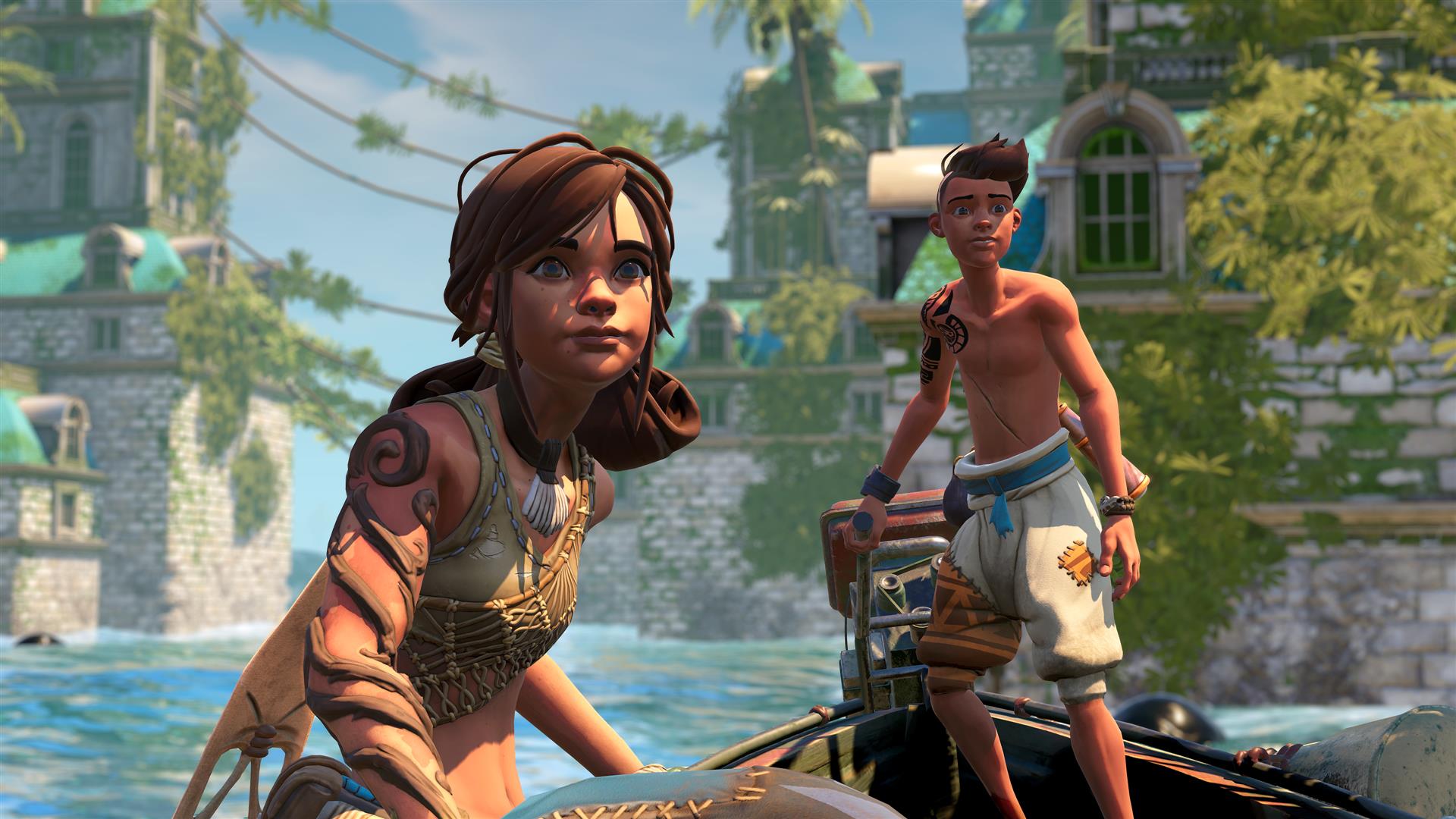 Written by Eric Hauter on 12/3/2020 for STA
More On: Submerged: Hidden Depths

Submerged: Hidden Depths is an aberration. There is no violence in this game. No combat of any sort. No way to die. You cannot fall from a great height, you cannot crash your boat, you cannot provoke an animal to attack you. The mechanics are limited to the point that I might be tempted to call them “basic.” And yet, Submerged: Hidden Depths is an utterly entertaining game, and one that I am happy to spend time playing. 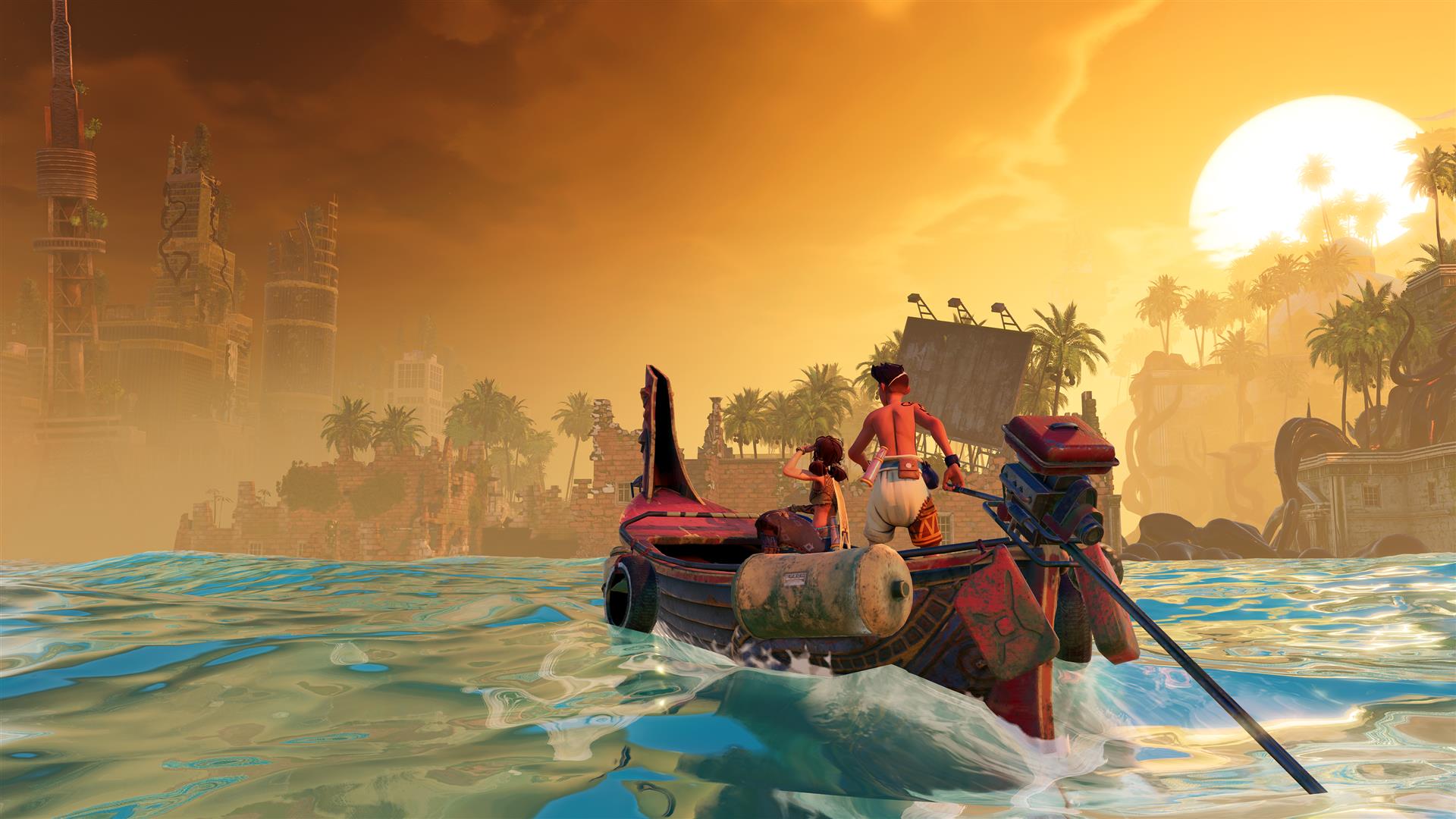 I never played the first Submerged game, and was only vaguely aware of its existence. I received the Submerged: Hidden Depths a few days before its surprise arrival on Stadia. Settling down to check it out one night, I only intended to play for 15 minutes. But three hours later, there I was, still on the sofa with my Stadia controller in hand, puttering around in my little boat and exploring the beautiful ruins of some ancient civilization.

Submerged: Hidden Depths takes place in the future, after a mysterious apocalyptic event has rocked our world, sinking it into the sea so that only the tips of the giant structures we’ve produced poke out of the waves. Far from being dark and morbid, Submerged is bright and beautiful. The water is a gorgeous blue, and is infinitely appealing. Nature has reclaimed much of what our civilization left behind, causing greenery to scale walls, with giant blossoms blooming at the tops of skyscrapers. Submerged: Hidden depths is a stunningly beautiful game, and the vistas often stopped me in my tracks so I could stop and stare. 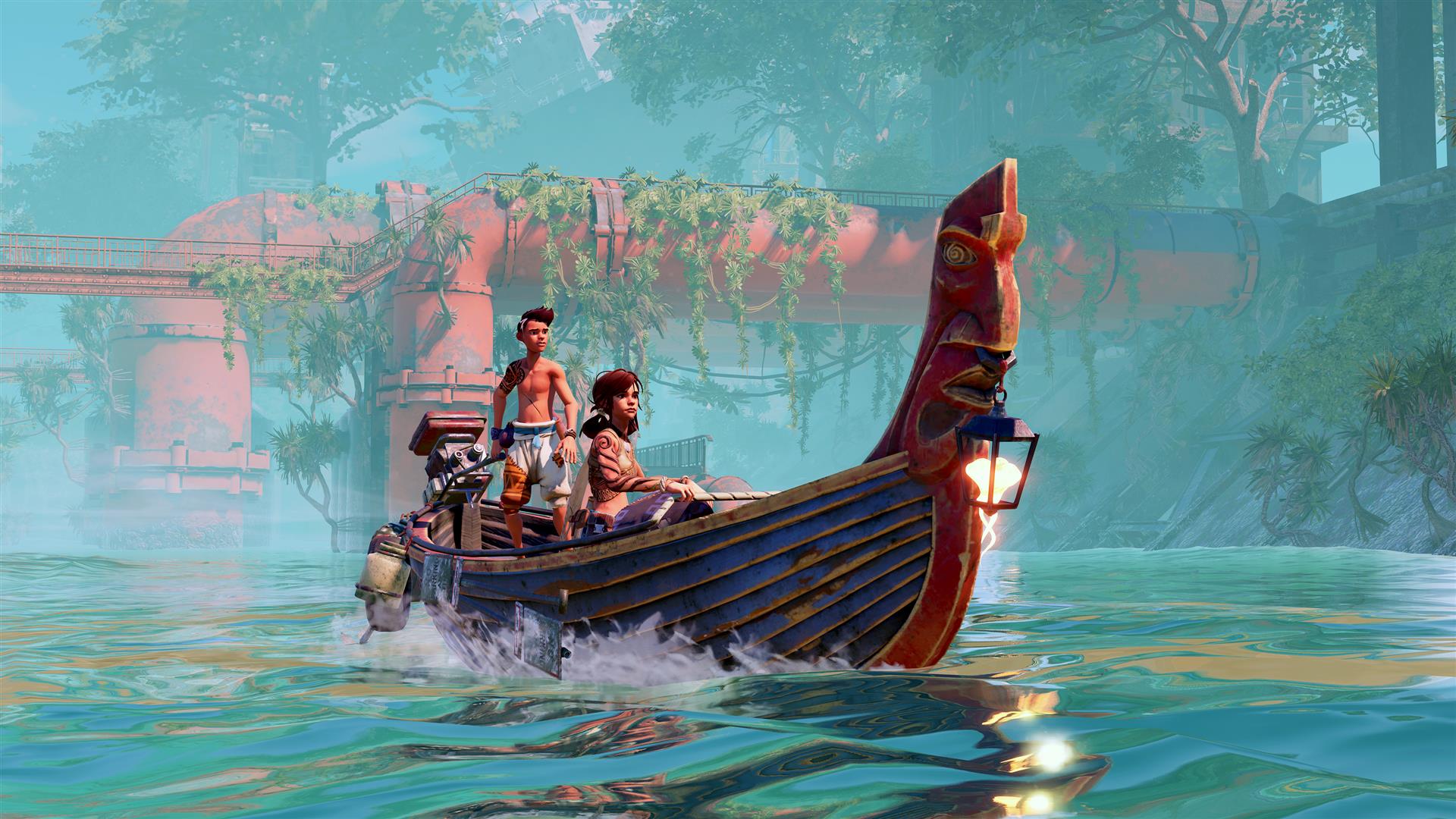 A peace has descended upon the submerged city, but all is not well. A dark mass has grown up, tangling through the water and engulfing many of the ruined structures, corrupting the wildlife within. A young sister and brother explore the city on their boat, searching for clues as to their shared history and attempting to clear away the black stuff.

The brother and sister live in a dome in the center of the player’s map, where they return every night for a rest and a very brief cut scene. But most of the game is spent puttering around the ruins, looking for fun stuff to explore. The seascape is dotted with amazing sights, and this is one of those games where if you can see someplace off in the distance, you can motor over there and check it out. Some of Submerged: Hidden Depths’ best moments come when you putt around a corner and see some insane relic from the past, or when you climb one of the game’s many lookout points and have one of those patented Ubisoft sweeping camera moments. There is a lot of gorgeous stuff to see here, and finding it is half the fun.

There are nine primary ruins to explore in Submerged: Hidden Depths – and a ton of smaller structures – but first you have to find them. And it is here that the hand-holding nature of this game begins to reveal itself. Floating arrows point the player in the direction of major sites. The guidance is welcome at times, but it also feels a bit like Submerged: Hidden Depths doesn’t trust the player’s ability to find the good stuff.

Most of the game is similarly guided; the challenge level in Submerged: Hidden Depths is very low. While exploring Submerged’s complex ruins, players will rarely wonder where to go next; every inch of these places are covered in strips of red paint calling the player’s attention to the next destination. Even hunting for the game’s many collectibles is often a case of determining where the critical path is, and then going a few steps in the other direction. These collectibles serve a few purposes. Some reveal parts of the games story, while others combine to unlock cosmetics for the characters and their boat. Nothing earth-shattering, but it does add a nice easter egg hunt feel to the exploration. 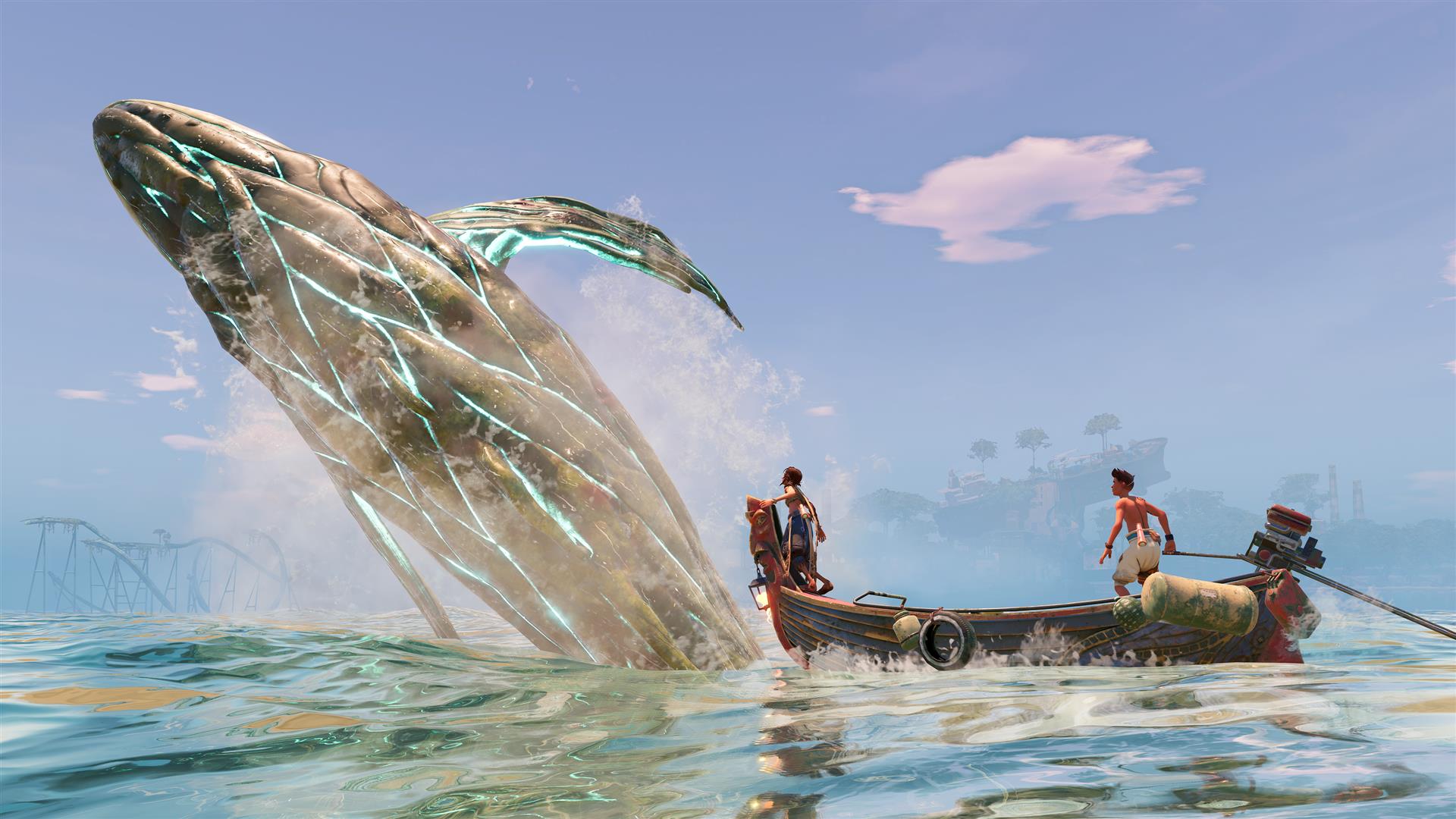 This is a game that skilled players will absolutely tear through in a matter of a couple of hours. But perhaps hardcore gamers are not the audience that this game is looking for. Tomb Raider and Nathan Drake fans may enjoy a trip through Submerged’s watery ruins, but they will first have to reset their expectations and get into this game’s super chill groove. There will be no bows or guns in Submerged, thank you very much, nor will it take much puzzle-solving skill to work through this game’s challenges.

Indeed, Submerged: Hidden Depths feels very much like a game that I could hand to my seven-year-old daughter or my 72-year-old mother, and they would be able to figure it out just fine. More complex than many so-called “walking simulators,” Submerged: Hidden Depths still feels like it would fall somewhere in that neighborhood. I wouldn’t call Submerged a “casual game,” but it is definitely on the more relaxed side of things. 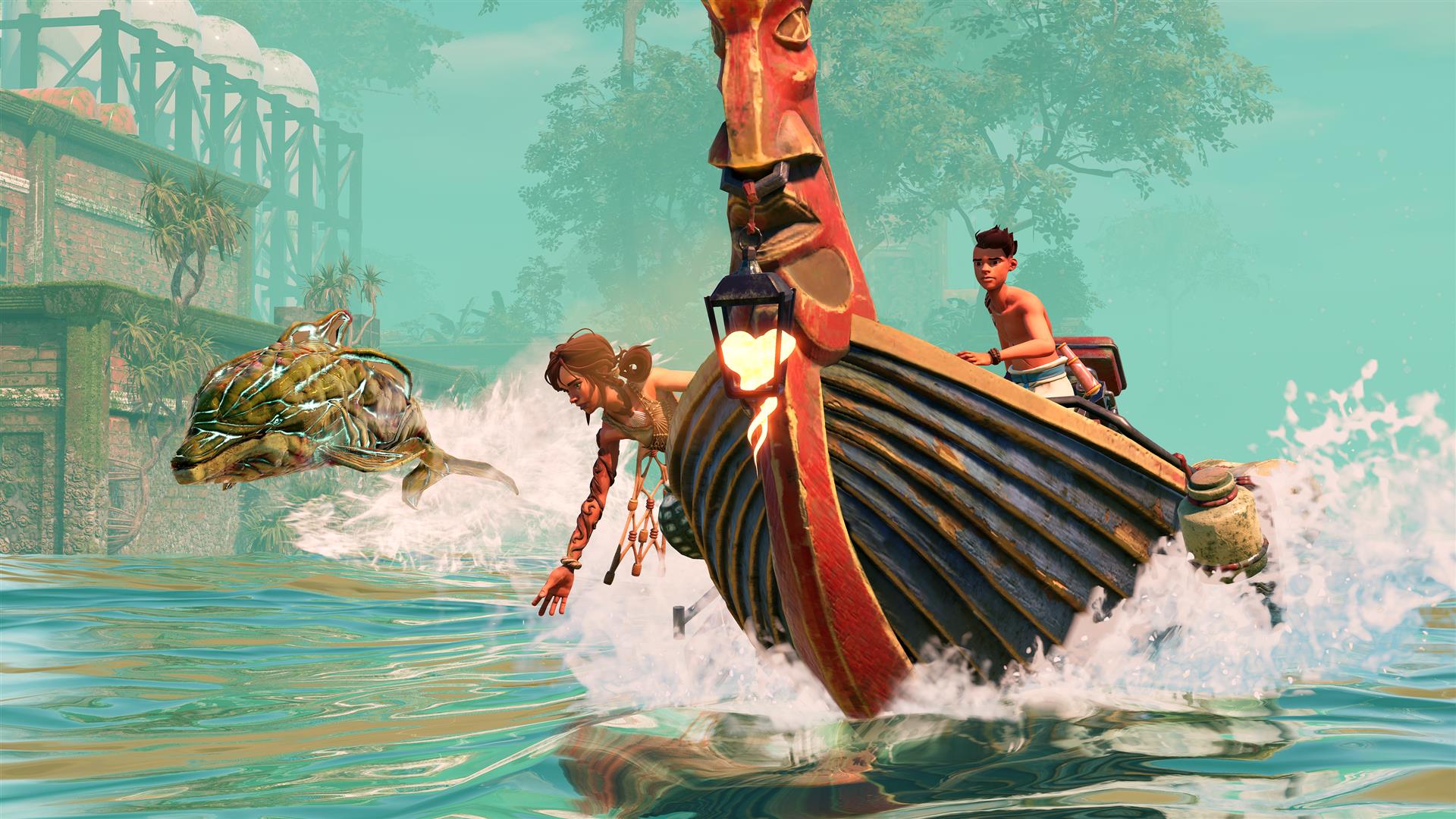 But then, relaxed games can be…relaxing. A colleague texted me while I was playing Submerged: Hidden Depths to ask me how it was, and after I described it, he replied “That actually sounds kind of nice.” And he’s totally right. It is nice to spend time in this world, and I found myself strangely compelled to see the game through to the end. Combat and challenge are not the only motivations in the world, I suppose. The scenery is beautiful, the two lead characters are appealing, the music is wonderfully chill, and the exploration is unchallenging and fun. Sure, the game feels like a guided tour, but I’ve been on some pretty awesome tours, and Submerged: Hidden Depths has a lot of cool stuff on display.

Speaking of displays, those that have the ability to crank Stadia up to its 4K HDR potential should absolutely consider doing so for Submerged: Hidden Depths. I’m not a graphics guy – I rarely even mention a game’s visuals in most of my reviews. But man, this is a stunning game. 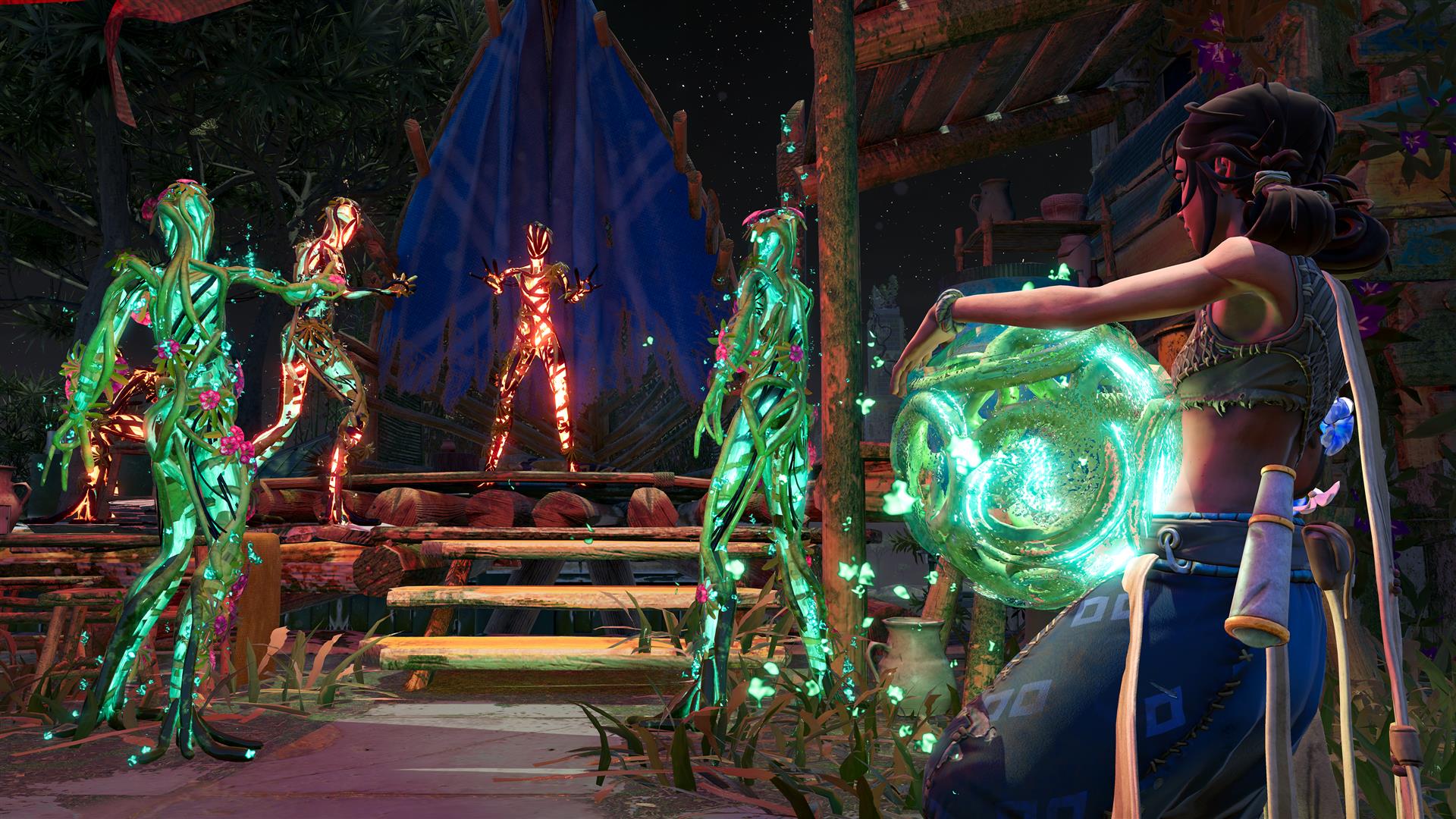 There is an audience out there for Submerged: Hidden Depths, and I was surprised to find that I am part of it. This game absolutely entranced me. Sometimes, while playing more complicated games, I find myself wishing that I didn’t have to engage in combat quite so much, or struggle so hard to figure out where to go next. Submerged: Hidden Depths takes a lot of that stress off of the player’s plate, just allowing us to exist in its beautiful world. It’s kind of a gift, really.

Submerged: Hidden Depths exists on its own chill plane – an exploration game that is truly about exploration and little else. Though some may feel that Submerged is lacking in mechanics, those that get onboard with its subdued vibe will find a lot of beauty in the experience. This is a gorgeous game, and exploring its mysteries is a reward in itself.