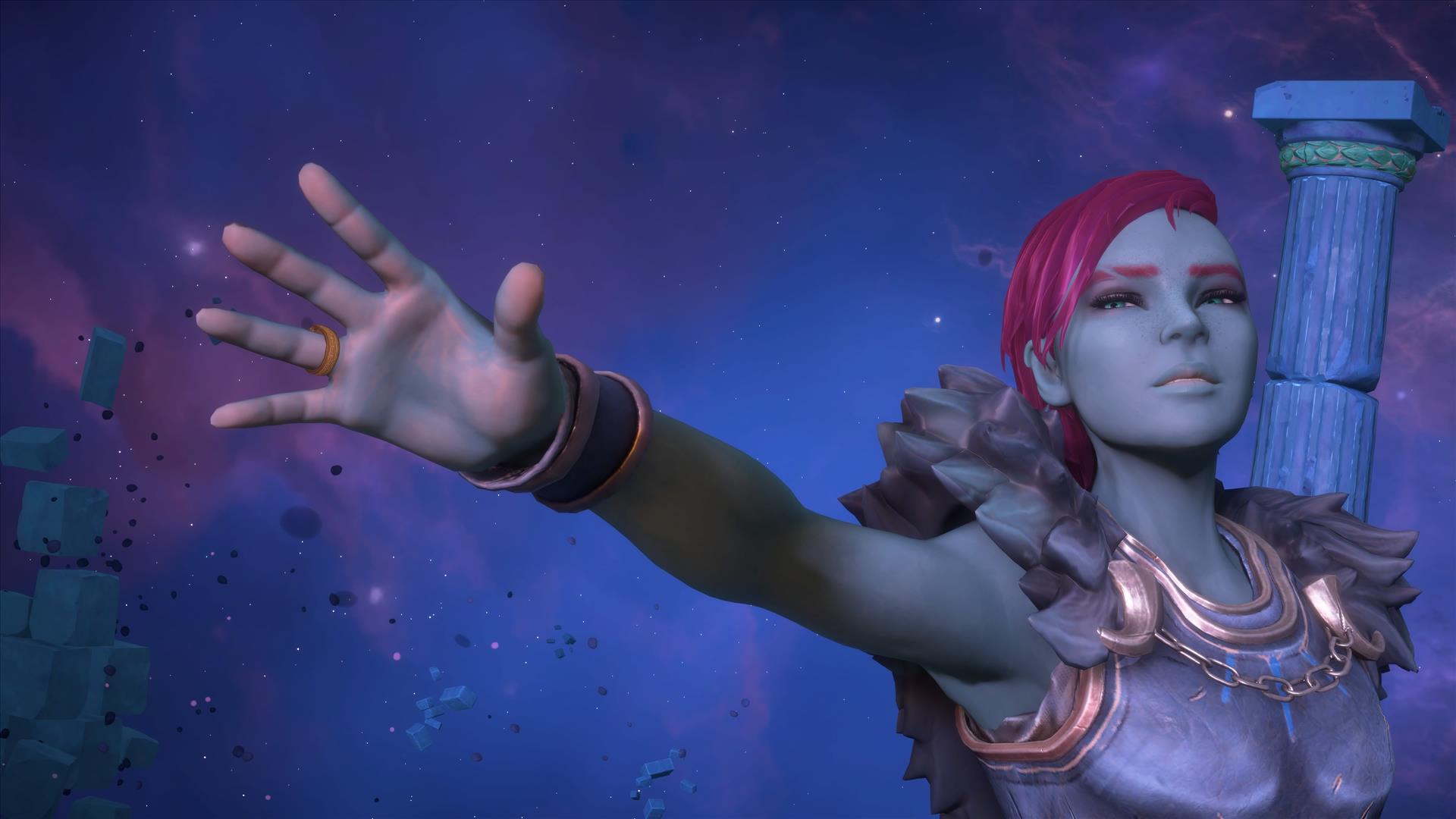 Immortals Fenyx Rising is a puzzle game hiding in the sheep’s clothing of an open-world exploration game. I’m not trying to imply that a puzzle game is a bad thing, of course, but I was surprised when starting Immortals just how ingrained the puzzles are in the DNA of Immortals’ experience. I don’t know how many puzzles are tucked into the landscape of Immortal’s beautiful open world, but they must number at least in the hundreds. 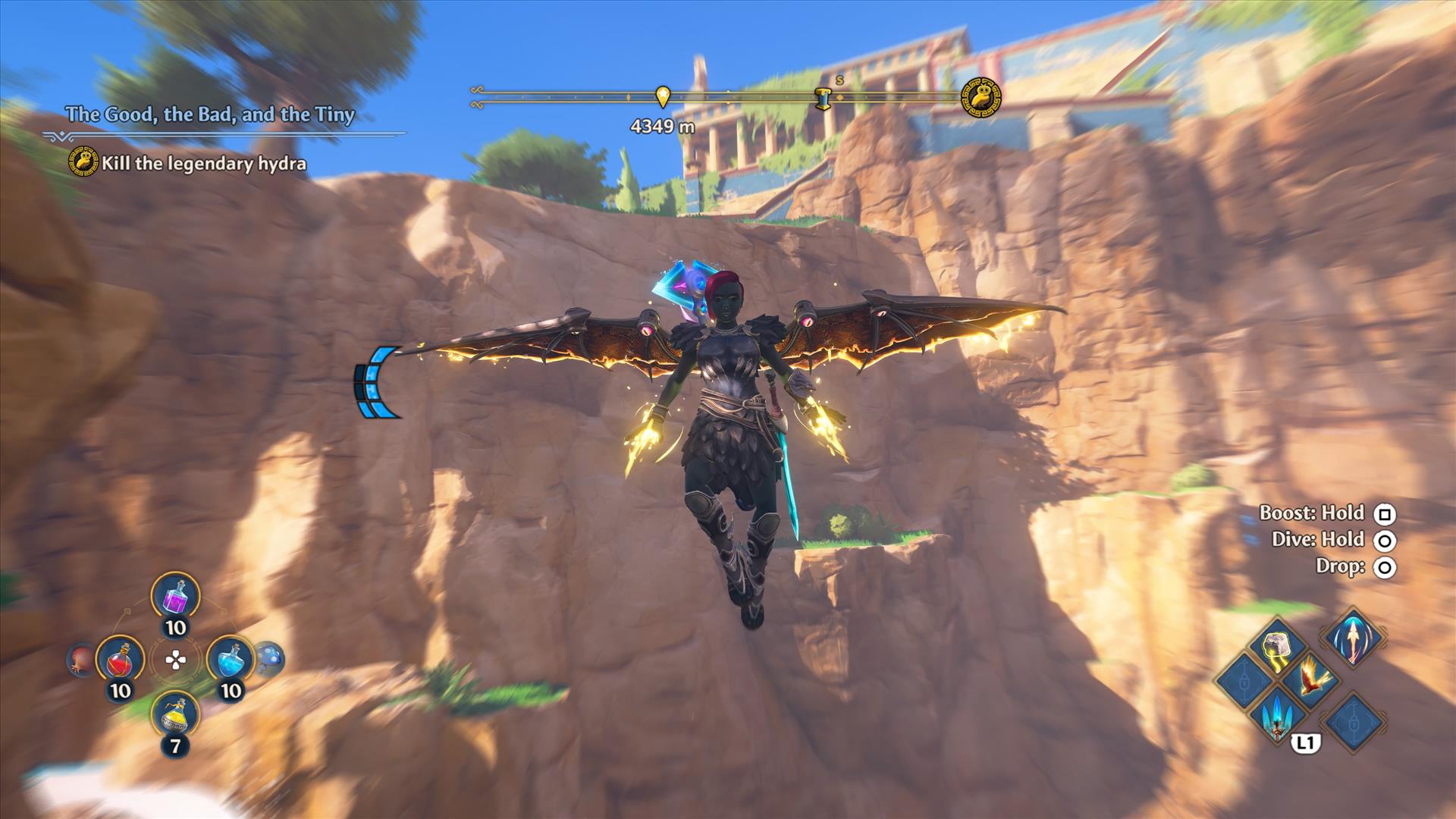 Everything you do in Immortals Fenyx Rising is hidden behind a puzzle. Want to open that chest you found on the map? Better beat up some dudes, and then solve a puzzle, before Immortals will allow you to get your loot. Want to challenge that area boss that has been pestering you? Hop into a rift and spend 20 minutes solving puzzles; after that, you can fight him. Want to get more health? Gain more stamina? Upgrade your potions? Develop your skill tree? You better be ready to go solve some puzzles.

The puzzles themselves are remarkably well designed. While the mechanics will likely be familiar to gamers, the depth of some of the solutions left my jaw on the floor a few times. I’m not ashamed to admit that I recruited my seven-year-old daughter, who showed real aptitude for such things on our recent playthough of PHOGS!, to help me with some of the more challenging sections. I’m perfectly capable of guiding a flaming arrow through a few hoops, but some of the more complex platforming/floor switch/levitation puzzles had me a bit stumped. This isn’t exactly my strong suit as a gamer. 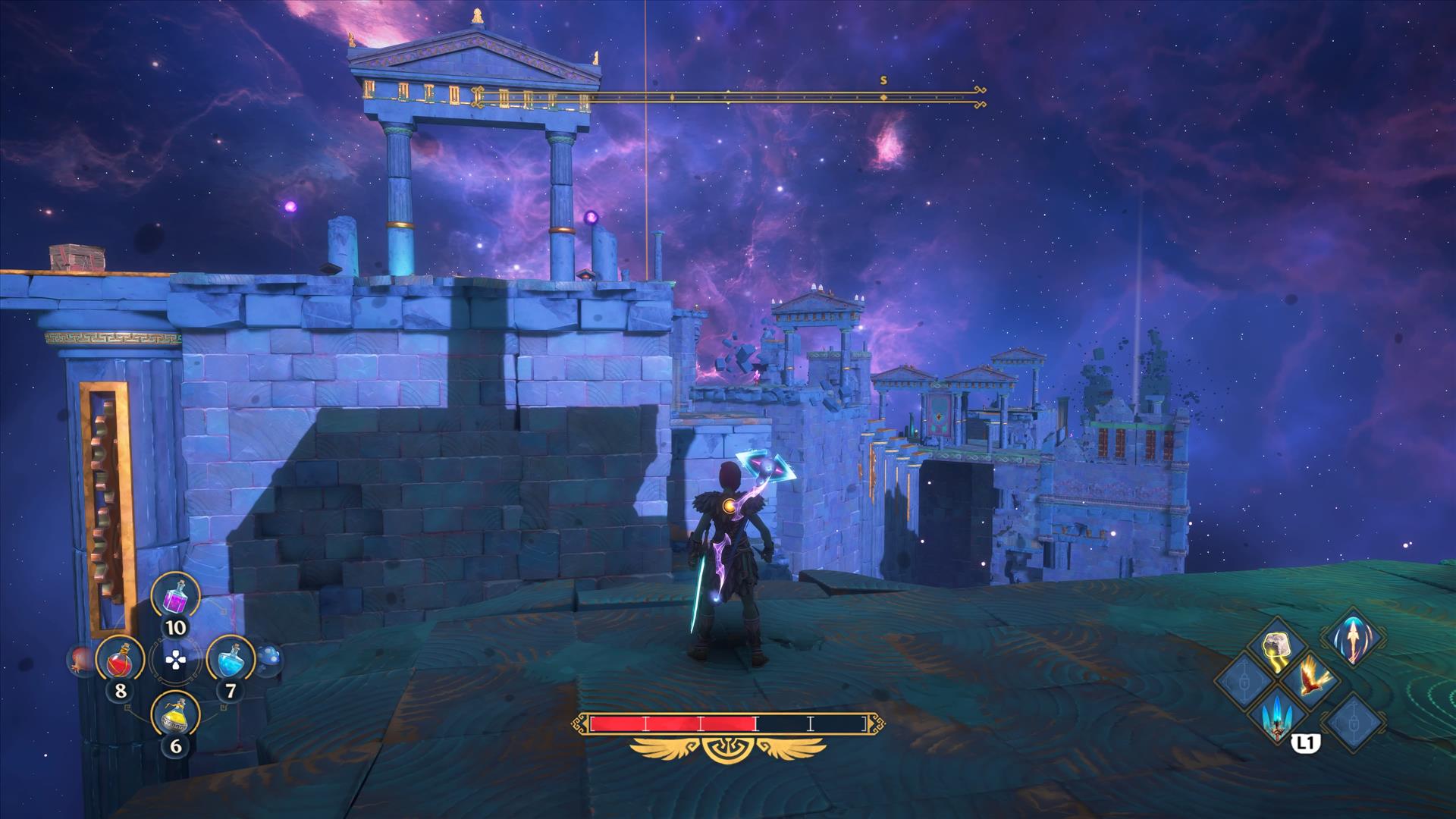 Not that the unexpected focus on puzzles was necessarily a drawback. In general, Fenyx Rising is light and airy, wearing its Breath of the Wild inspirations on its sleeve, while forging its own identity through its witty writing and surprisingly deep character work. It’s a lovely game, full of beautiful artwork and fantastically humorous moments. I just wasn’t ready for how much Immortals would expect me to think. This is not a game that will allow you to simply turn your noggin off, run around, and grind for levels. Immortals wants you to work for it.  Once the player accepts that puzzle solving is the order of the day, their time in Immortals will be a lot smoother.

Fenyx herself (I played a blue female Fenyx, and she is the best) is a happy, lively character, all enthusiasm and light. Washed up on shore after a storm knocks her ship around, she finds that all humans – including her beloved warrior brother – have been turned to stone. The evil titan Typhon has taken over running the show from the Greek gods, stealing their “essences”, and humbling them in new forms on Earth. 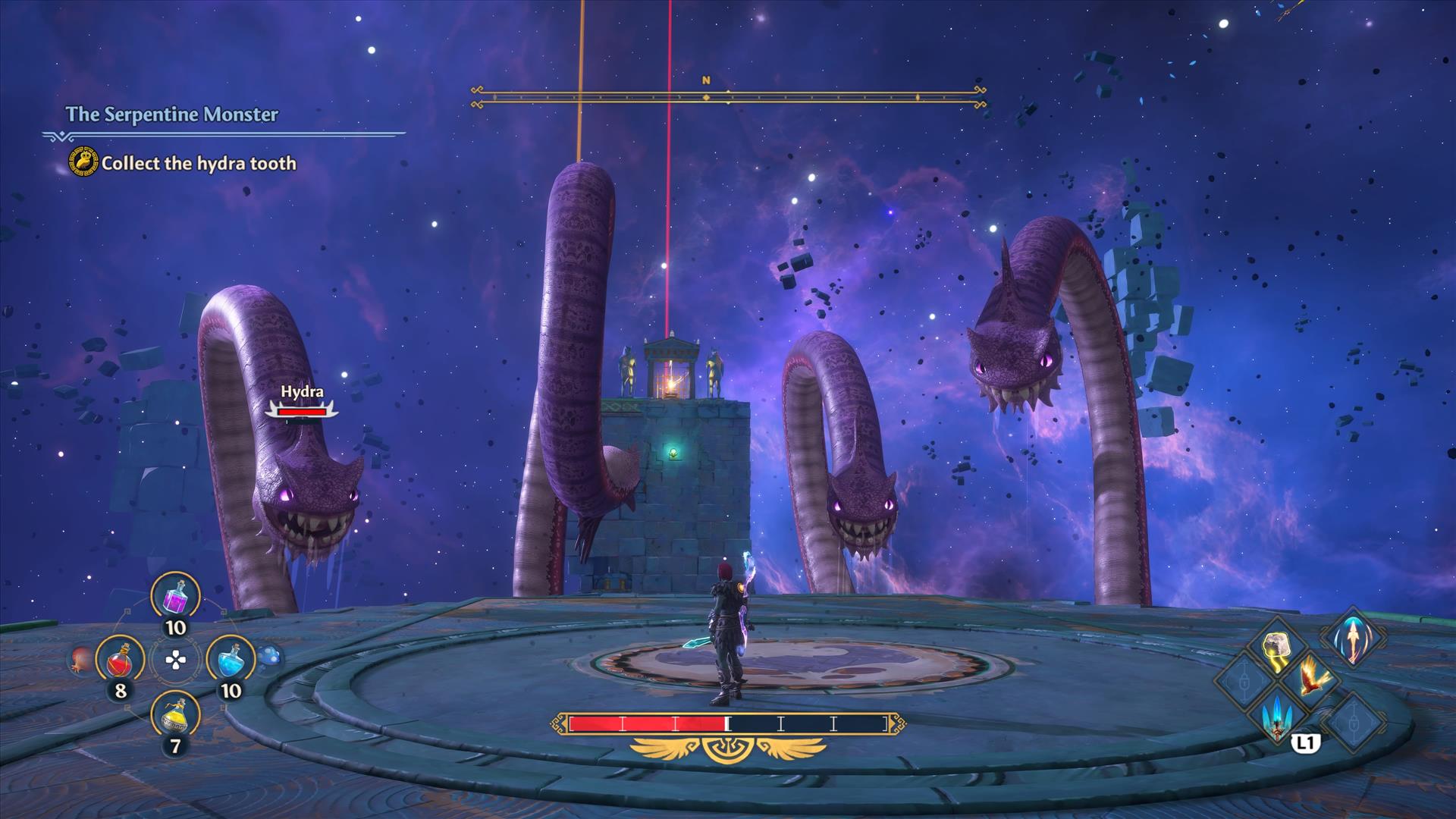 Zeus, who somehow sidestepped the entire affair, turns to Prometheus – currently still chained to a rock for that whole fire-delivery thing – to help him set things right. The two make a bet. If Fenyx can rise to the challenge, restore the gods, and set things right, Zeus will free Prometheus from his liver-extracting punishment.

This sets the stage for the bulk of the game, with Fenyx running around the island freeing one god at a time, while Zeus and Prometheus watch from afar – interjecting jokes and gently bickering over the young woman’s chances. The presentation of the gods in Immortals is lively and fun. These are not stodgy historic figures, though they clearly have a lot of history between them which they regularly reference, making the player feel as though they are walking into an established and very lived-in world. Cartoonish, but with a streak of real humanity, the gods are vain, witty, and – when rescued – extremely grateful. 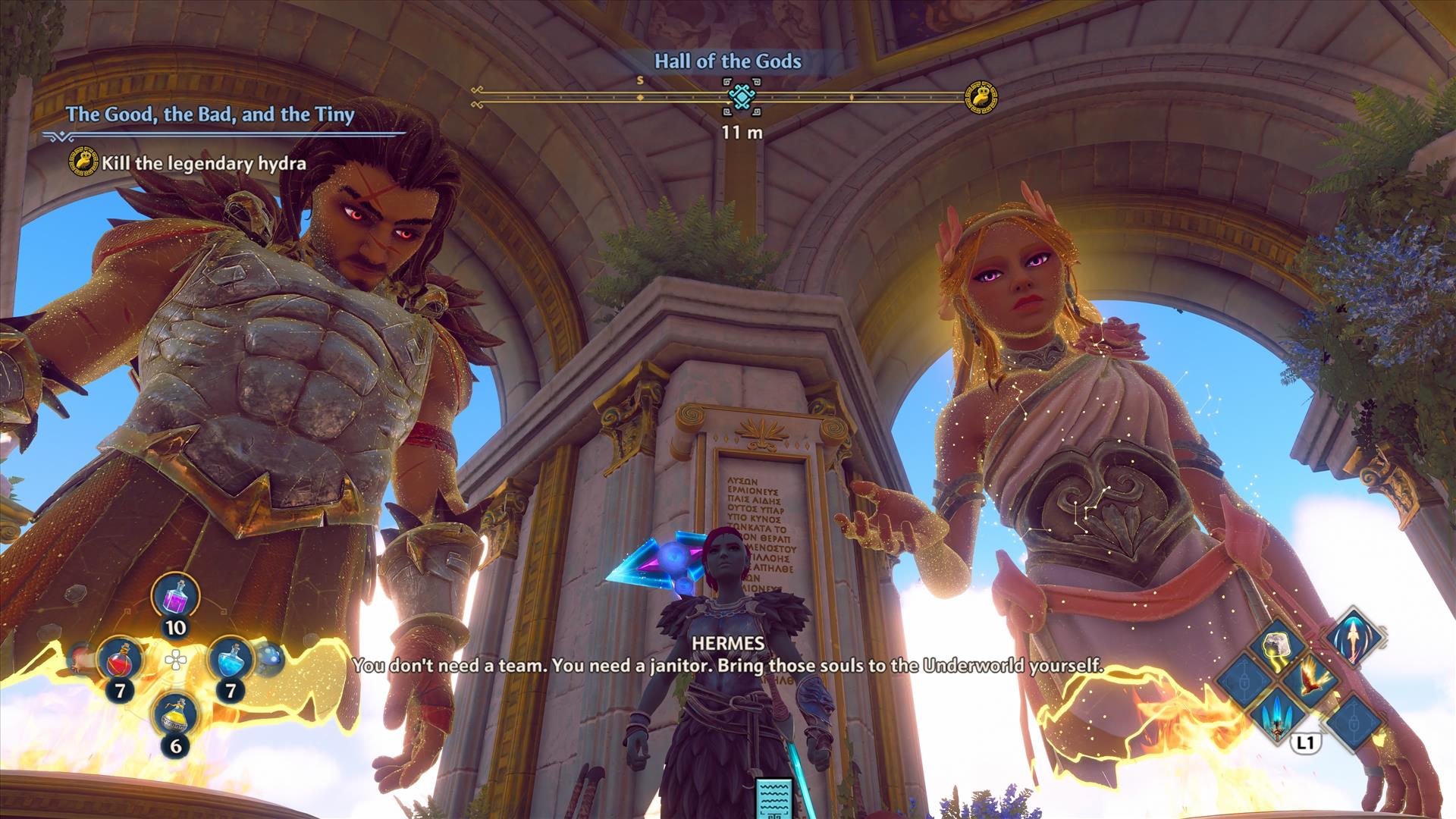 The gods’ island is divided among them, with each of the four primaries (Ares, Athena, Aphrodite, and Hephaestus) ruling over an area that visually reflects their personality. Aphrodite’s garden-like area is all trees and grass and splendor, while Ares’ war-torn region is littered with skeletons and battle scars. Fenyx must make her way into each region and climb the enormous statue of the god residing there, removing the fog of war from the map of that region. This sets off a quest chain to find the god, do some quests at their behest, pick through an enormous puzzle-laden end area to grab their essence, endure a last minute complication, and finally restore them to their godly glory.

While this pattern repeats throughout Immortals’ maybe 25-hour main campaign, surprising character moments and plot twists keep the proceedings from becoming a grind. When you finally find Ares, for example, and discover that he has been reduced to living in the body of a chicken, the irony and humbling cruelty of the situation are played for enough laughs that you don’t mind going through the motions yet again to see what happens. This is one of those games where the story provides enough motivation to see some repetitive moments through. 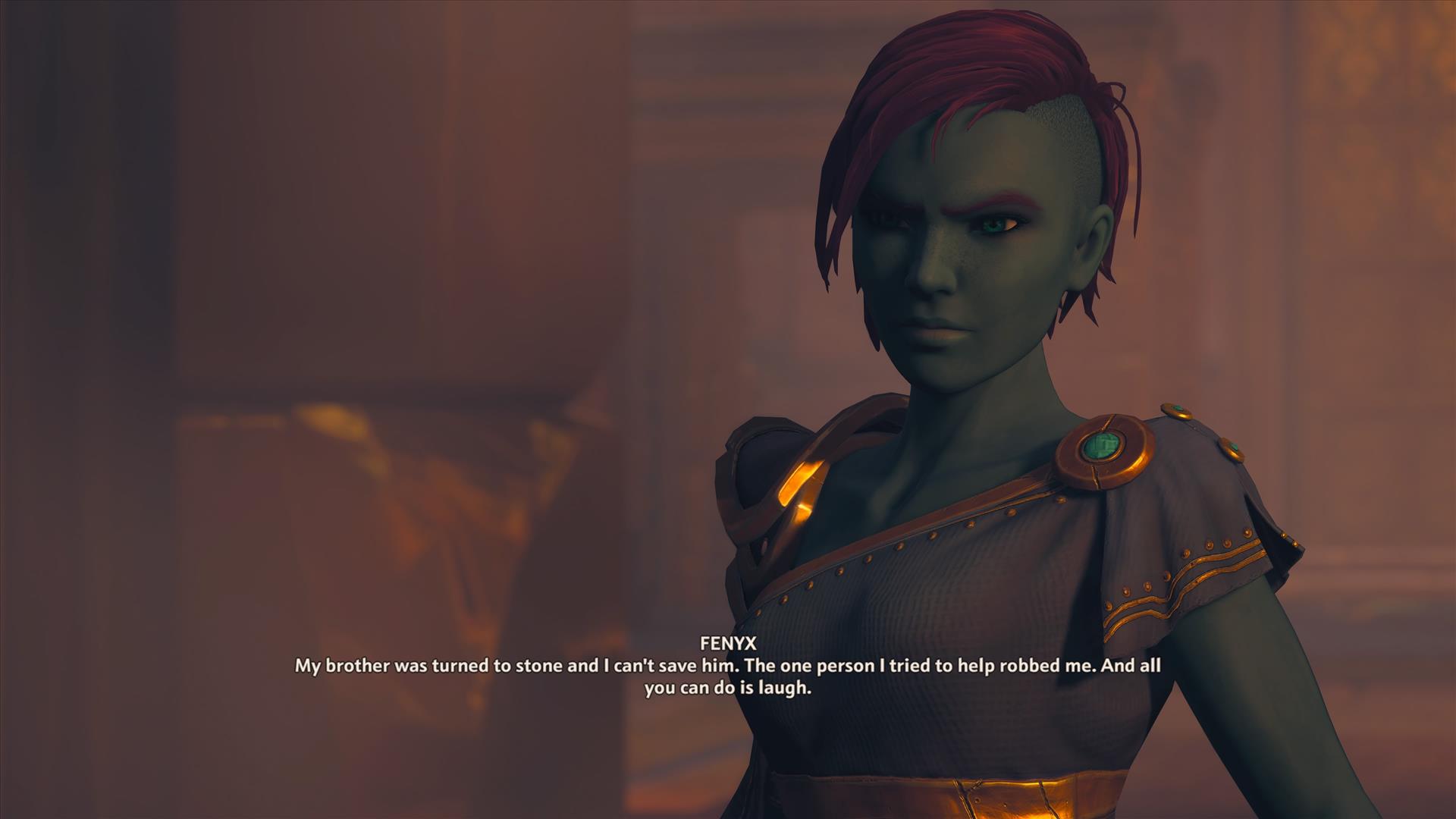 Combat in the game starts out very similar to what Assassin’s Creed fans might be used to, but there is enough room for customization here for players to determine their own styles. I’ve been enjoying stealth play lately, and I set about creating a move/gear set that would allow me to sneak around.

I eventually discovered that my pet phoenix had a power that allowed me to blanket myself in shadow, and I then found a new skin that would allow me to stay in stealth for as long as I was able to string together one-hit kills. This combo allows me to stroll through a camp, cleaning up the trash mobs completely before starting my battle with any big guys with a devastating stealth hit. Sure, it might be cheesing the game a bit, but once you have seen all the enemy types, you generally just want to get through the battles to get to the inevitable puzzle. 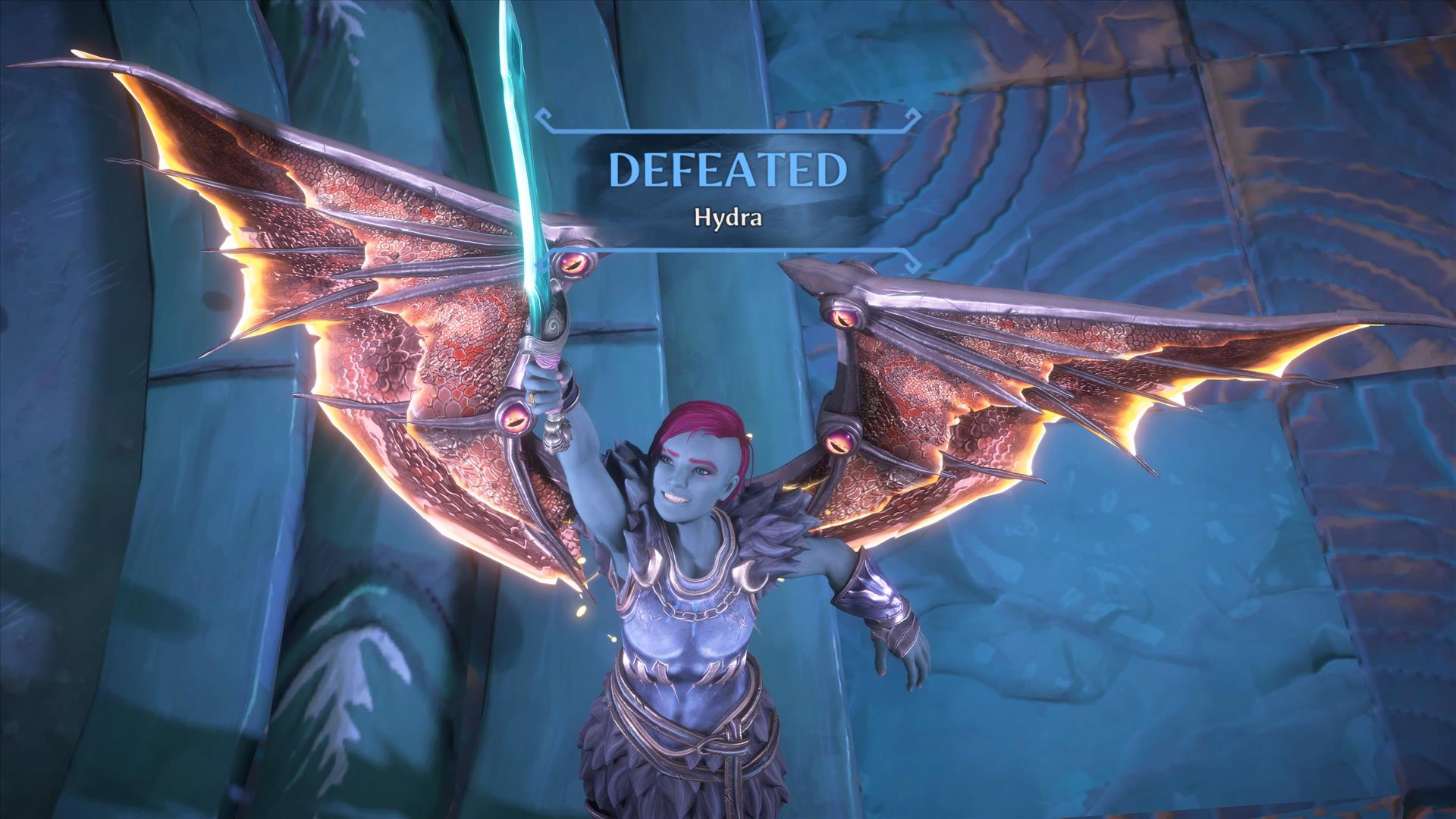 In addition to my beloved bird-stealth, players have a number of “Godly Powers” that they can unlock. My other favorite is the move that causes a large area of the ground to magically grow an enormous number of spikes, impaling any baddies that are nearby. I sunk a lot of points into that one, upping the damage and adding a stun effect. Between that and my sneaking attacks, battles tend to be over pretty quickly.

Fenyx’s progression is tied directly to puzzle solving. Different types of puzzles offer different rewards – embers, jewels, coins, lightning bolts, and so on. All of these can be traded in at the Hall of the Gods, Immortals’ central hub. The Hall houses several different ways to cash out your goodies in exchange for progression, which is an interesting twist on a standard XP system. In fact, finishing long quest lines often only rewards the player with a new piece of equipment (or a measly skin), meaning that if you didn’t solve the puzzles and open the chests you encountered along the way, finishing a quest is not terribly exciting. 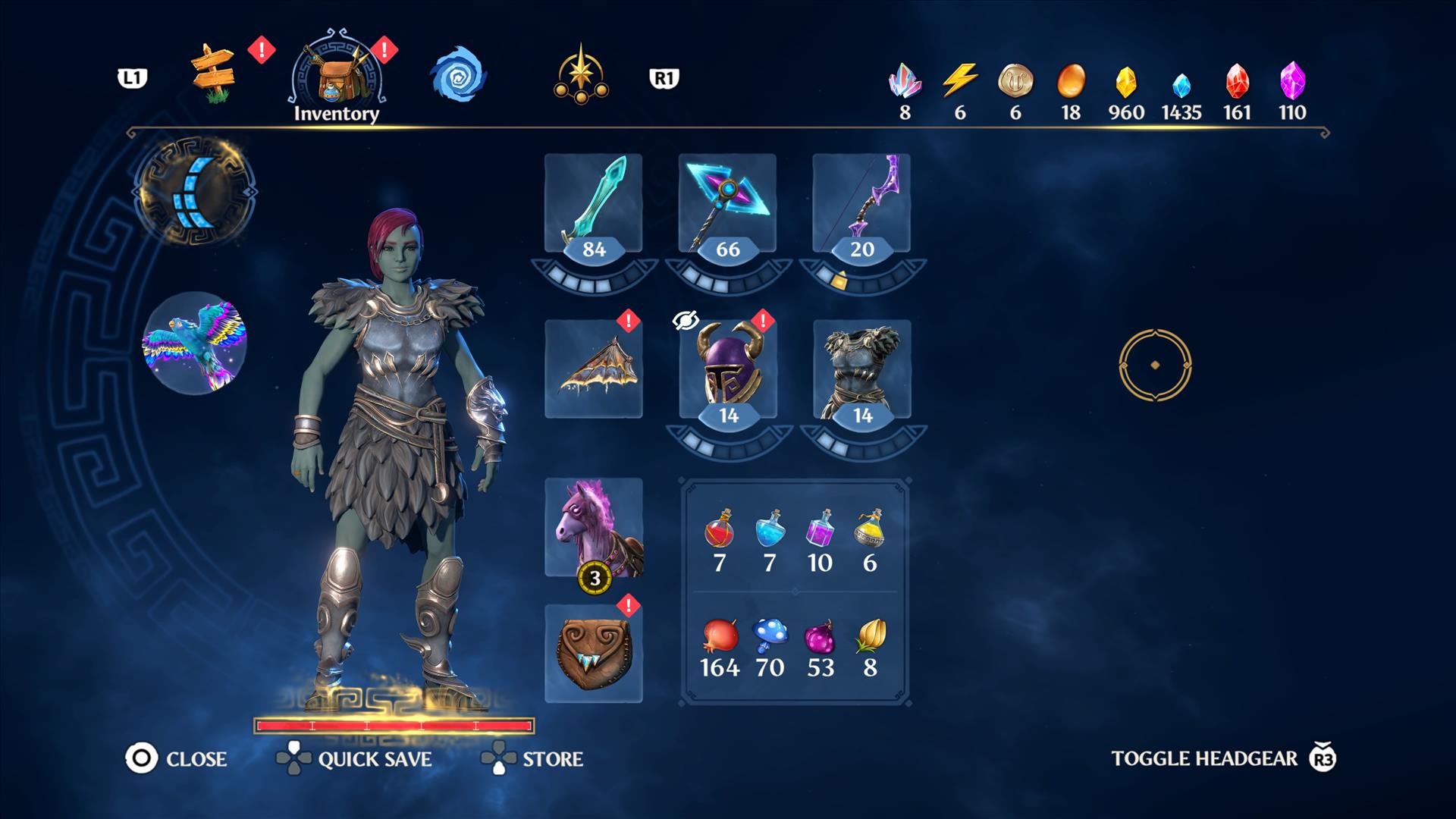 In many ways like this, Immortals Fenyx Rising subverts the expectations players might have for an Ubisoft game. Sure, you climb big statues to open up your map. But that map is empty unless you decide to use your looking glass to find stuff to fill it with. If you want to play Immortals all Zelda-style and just explore without a bunch of points of interest dotting your map, you are perfectly welcome to.

Another interesting decision is the elimination of a quest list. Destinations for quests are marked on your map, but you have to go into the map looking for them. A compass will guide you to the next point in your quest (if you desire), but like everything else, you can leave that turned off and just wander around. There are plenty of sight, sounds, and of course puzzles dotting the landscape to make open exploration interesting. 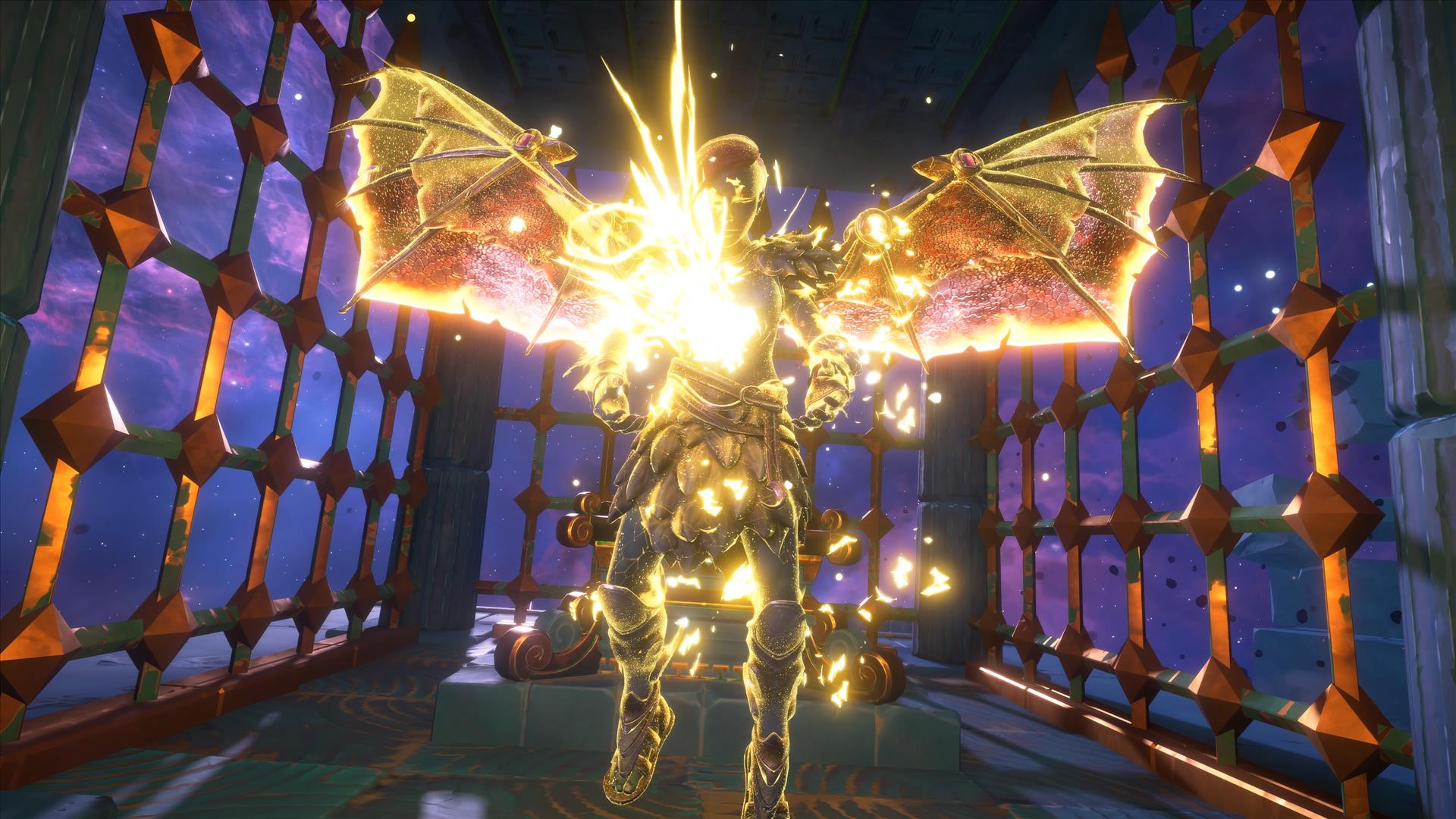 Immortals Fenyx Rising is a real departure for Ubisoft, eschewing a lot of the standard procedure that gamers have begun complaining about over the last several games. Ubi took a chance with a lot of design changes, not settling for simply playing the hits, but genuinely trying new things. Sure, the company cribbed some of those things from other games, but the end result here still feels fresh and new.

Immortals is generally a rollicking good time, polished and smooth. This is a great new IP for Ubisoft, and I’m looking forward to seeing where it goes in the future. For now, Fenyx Rising feels like the first step in a long adventure – and that’s good enough for me.

Immortals Fenyx Rising is cheerful fun, offering a fresh take on Greek mythology that is cartoonish but with just enough humanity to keep it grounded. While the game plays like a open world epic, every mechanic in Immortals is tied to well-designed puzzles. Though the actions you take become repetitive, the story and writing keep things lively enough to see Immortals Fenyx Rising through to the end.