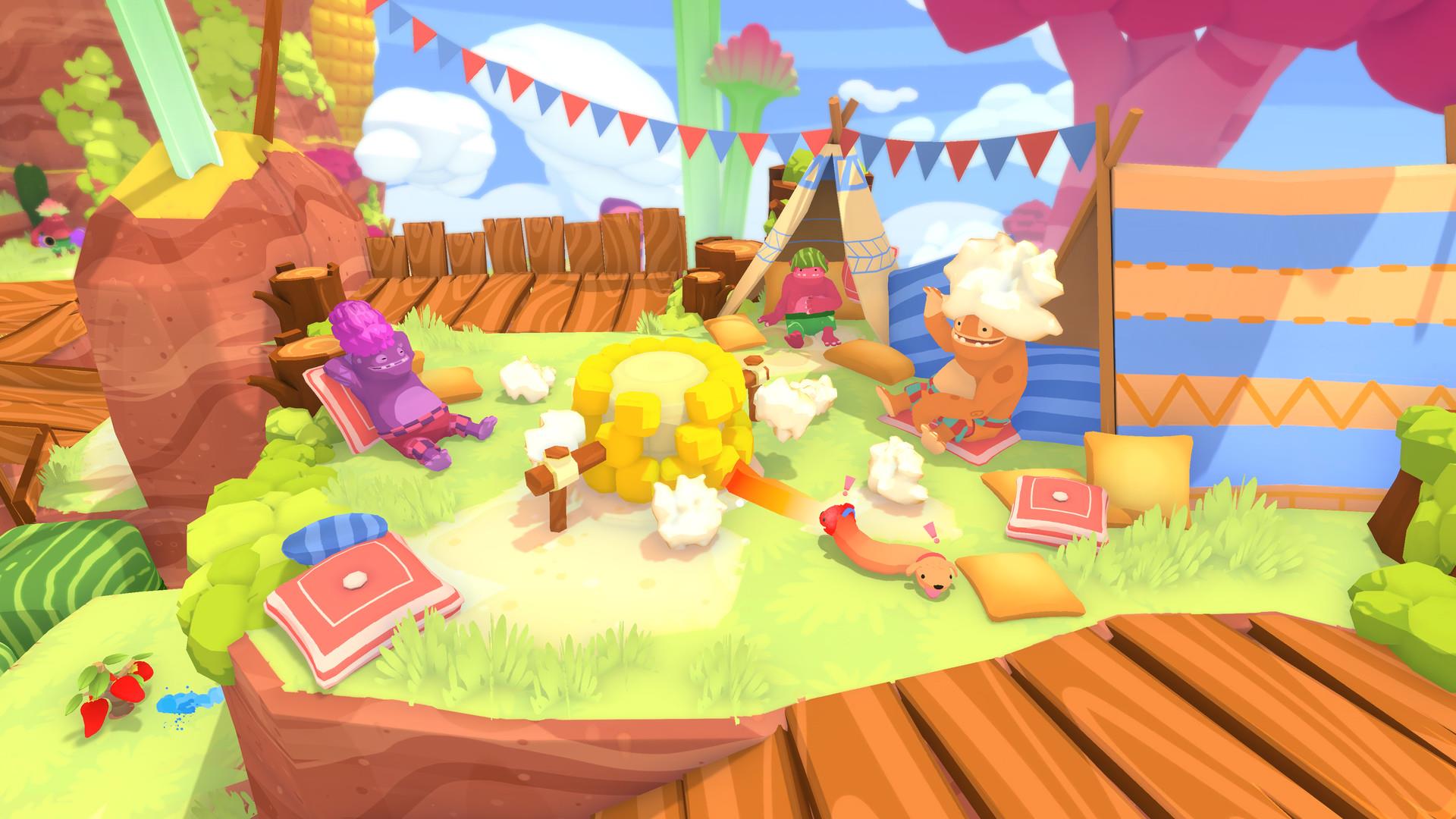 What do you get if you cross a dog with a worm? What about two dogs with a worm? Maybe you aren’t genetically crossing the dogs with a worm in a lab, maybe you are putting them all together in a teleporter you borrowed from Jeff Goldblum. Don’t let your mind get too dark with these experiments though. However you are mashing these animals together, you might end up with a Phog – the cheerful two-headed legless dog creature that is at the center of Bit Loom Games’ new puzzle platformer PHOGS!.

Honestly, my horror movie analogy is wildly off-base. While the Phogs are of unknown origin, they – like the rest of the game that bears their name – are very happy, well-adjusted puppies. In fact, the entire vibe of PHOGS! is one of general positivity. Happy tunes hum away in the background, while the Phogs themselves scoot and roll their way through three pleasantly themed worlds. It all feels very nice, providing a bit of color and fun on these cloudy fall days my family is currently spending indoors.

PHOGS’ publisher, Coatsink Games, has been flinging one quality family-friendly game after another into the market this year. PHOGS! takes its place right alongside Get Packed and Cake Bash as a game I am happy to play with my kids. More importantly, this is a game my kids are happy to play with me, which is no small achievement. The world blasts entertainment into kids’ faces these days like a firehose, but somehow these Coatsink games cut through the noise and make an impression on my fairly discerning seven-year-old daughter. PHOGS! wasted no time supplanting Sackboy: A Big Adventure as the “Daddy, can we please play?” game of choice around our place. 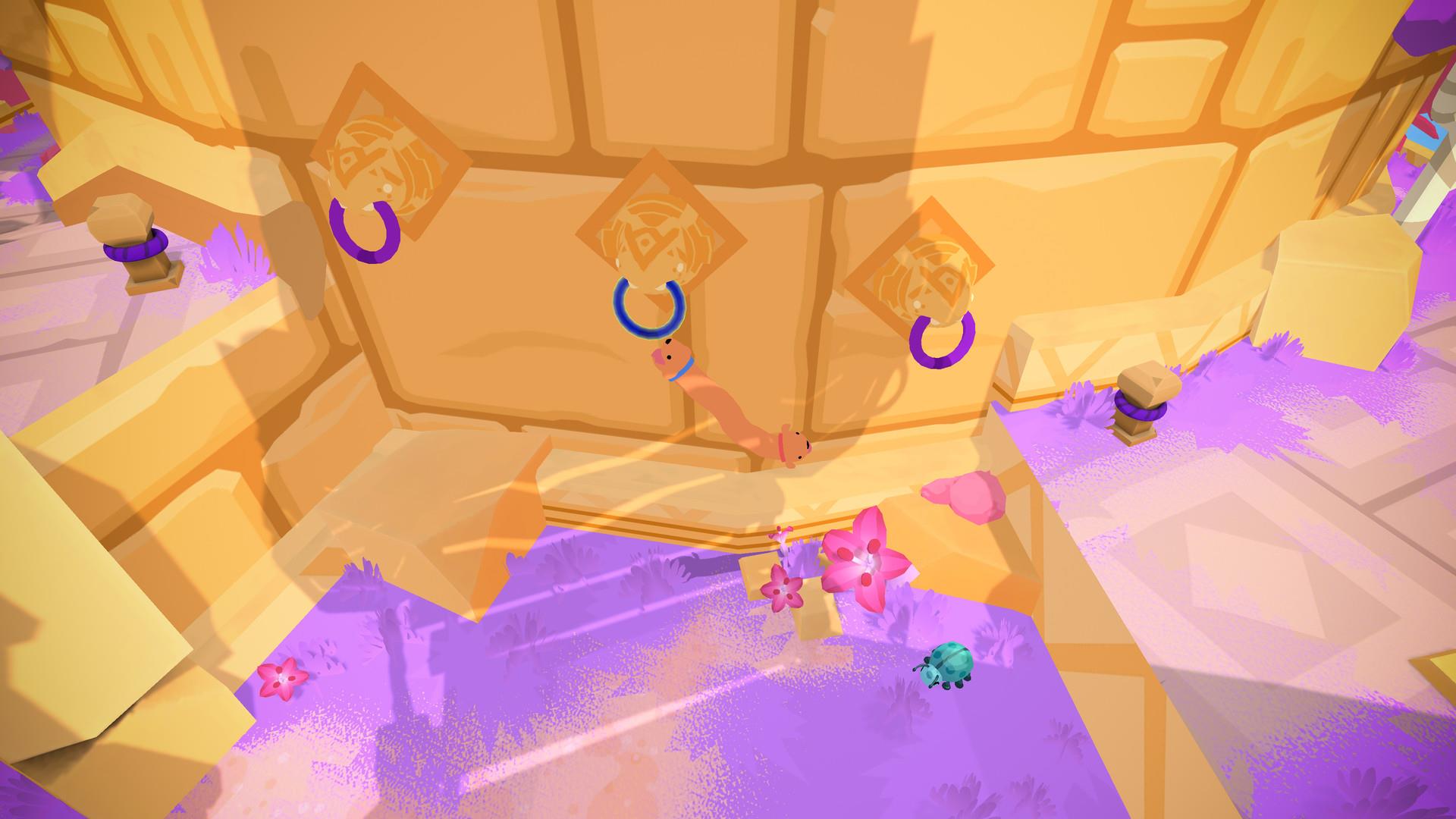 PHOGS! is perfect for family play, but adults will also enjoy playing together. This is a game that is appropriate for kids, but it isn’t what you think of when you picture a kids’ game. PHOGS! is smart, and requires a bit of problem solving to get through. Shame on me that at least half of the problem solving in my playthrough came from my little partner, who showed a surprising aptitude at seeing things that her dad missed.

A simple control design makes PHOGS! a breeze to pick up and play. Though players can share a controller (or a single player can play by themselves), my daughter and I chose to each have our own controllers and play on opposite sofas facing each other. We each needed enough space to contort our bodies and howl when we sent our Phogs off of a ledge for the umpteenth time. 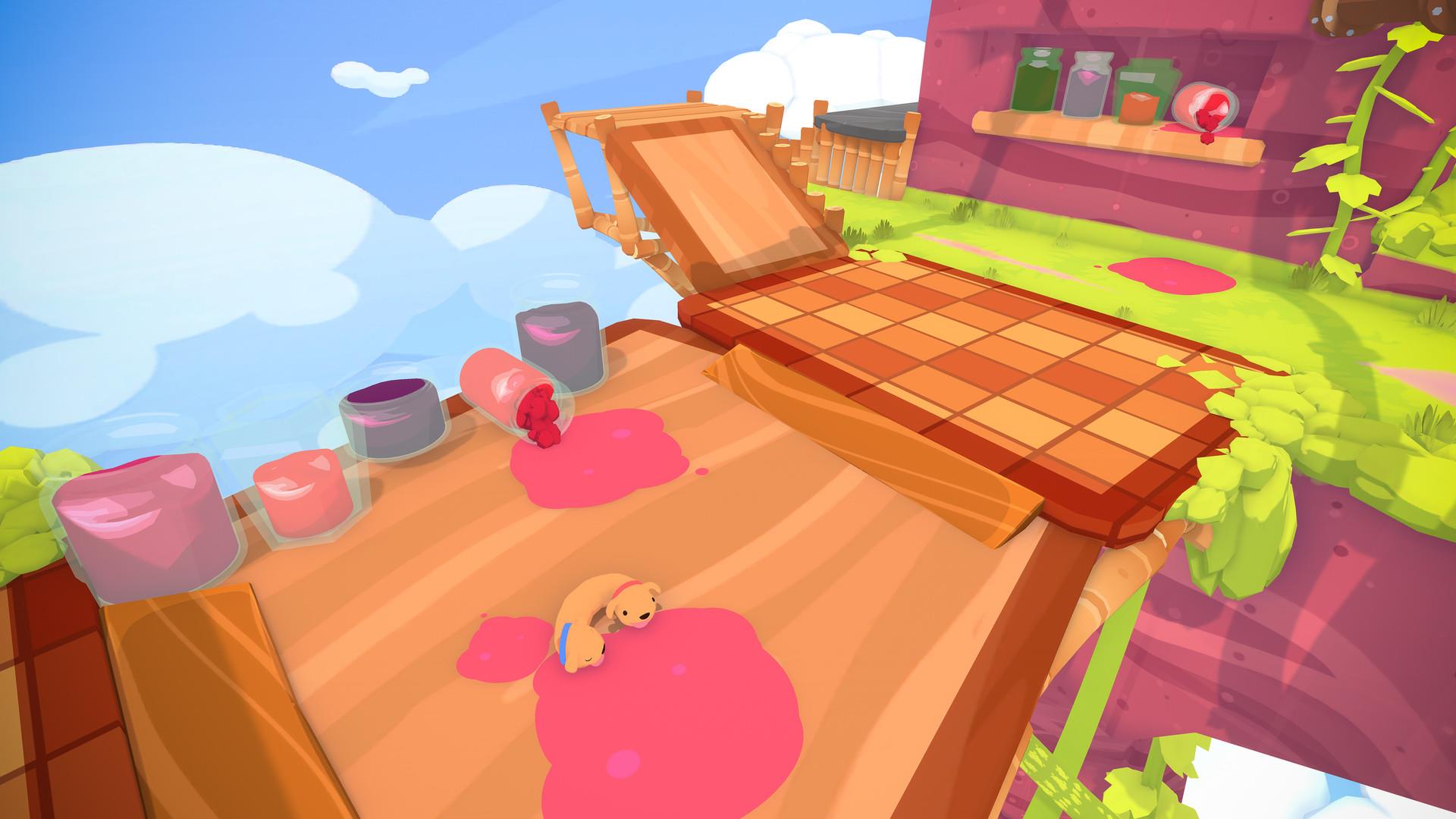 The Phogs themselves are controlled via the analog sticks, with a constant push and pull happening due to the fact that the two heads are attached in the middle. If one of the Phogs goes prone, the other can drag it along, but this won’t get you very far. Gravity and the need for cooperation will quickly stall players that are attempting to haul dead weight. Though we found it helpful at the beginning to chose a player to “steer,” we quickly found that we were able to act in sync fairly easily, with a constant stream of chatter flowing between us as we decided where to go next.

This is not one of those games like Goat Simulator that has players flailing around helplessly, giggling at the hilarity of their inability to move. The Phogs have weight and momentum, and do sometimes slide or wriggle off course. Learning to wrangle Phogs takes practice, but they are ultimately controllable, and the game never feels as though you and your partner are being unfairly robbed. If you play with a child, that is an important note. Sure, my kid got the occasional ornery kick out of dragging us both off a cliff to our doom, but with a bit of patience we found ourselves surprisingly adept at moving about, and were rarely dying due to the physics governing the Phogs. And of course, “dying” really only means being teleported right back to a couple of seconds before things went awry. It’s not punishing in the slightest, but that didn’t stop us from desperately attempting to prevent our demise. 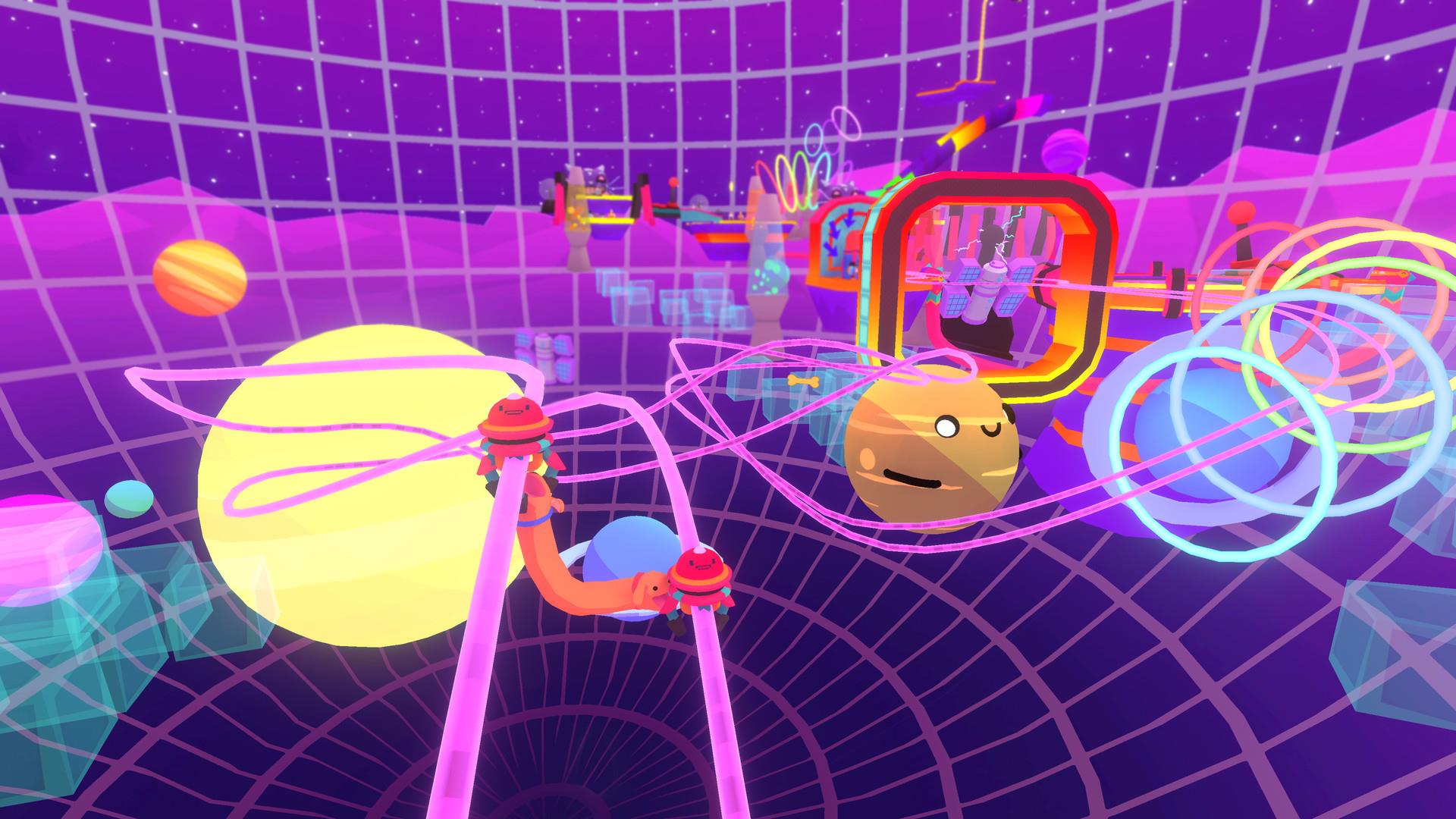 Phogs can grab objects in their mouths via bumper buttons, and the triggers cause the Phogs to freakishly elongate in order to reach far away objects. And that’s it. Two heads, two actions, and somehow Bit Loom Games squeezes hours of entertainment out of these modest mechanics.

PHOGS! is separated out into three themed worlds: Sleep World, Food World, and Play World, each with their own particular set of mechanics and logic. Each world has a central hub, with levels opening up one by one as you work through them. The levels in PHOGS! slowly build on themselves, teaching the player the mechanics through exploration and gentle prods, rather than stopping the action to explain what to do. PHOGS! shows rather than tells. Each world is capped by a boss levels, which comes in the form of  a series of rapid-fire puzzles, challenging players to use all they’ve learned. It is a clever and satisfying take on boss fights, as sudden combat would be wildly out of place in such a gentle game. 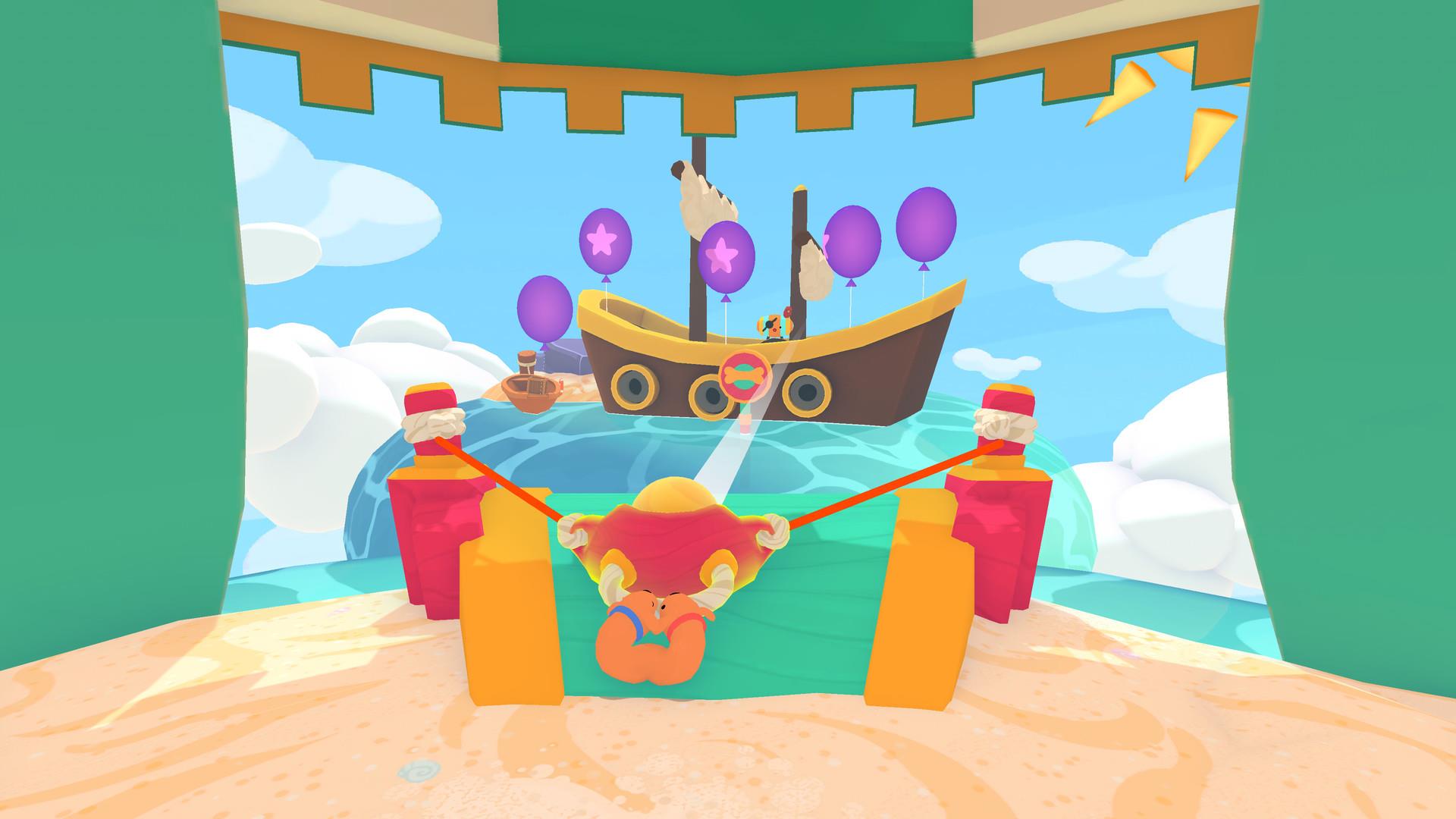 Players enter levels via a charming worm-transport system. Go into a worm’s mouth here, get plopped out of a worm’s mouth over there – all wormy things have two heads in PHOGS!, not just dogs. Players are faced with a series of environmental challenges. The primary goal of each level is to reach the next worm mouth and be transported to the next level, but standing in between you and a wormhole are a number of environmental puzzles. My daughter and I quickly settled on a practice of wobbling around the level to see what we were working with, then systematically fiddling with stuff until we figured out what to do.

Figuring out the interactions in PHOGS! is a lot of the fun, and I don’t want to ruin many of the game’s surprises here by detailing the puzzles. But for the most part, if you can grab something in your mouth, try it out and see what happens. You will often find yourself surprised and delighted. This is a game that rewards experimentation, so rushing through is not recommended. There are only so many things to do on each level, so you will know instinctively when it is time to move on. 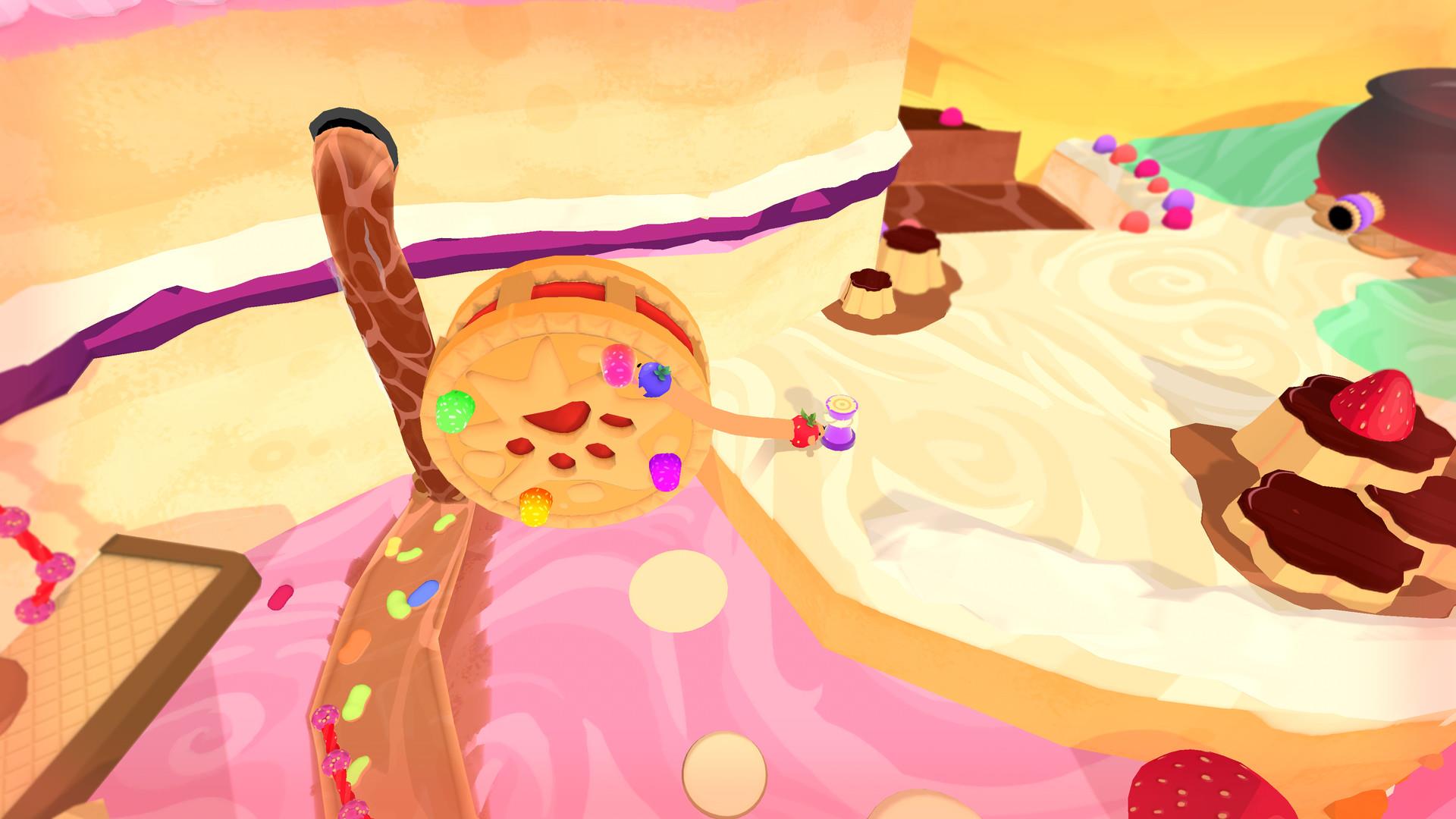 Most of the puzzle solutions are fairly gentle and simple to parse, but that doesn’t make reaching the end of a level any less satisfying. PHOGS! walks a very careful balance between guiding the player to figure out what to do, while making physically achieving that goal just difficult enough to be gratifying.

Additional, non-progression-related puzzled reward players with golden dog bones, which can be traded in small shops at each world’s hub for a variety of hats for your Phogs. I wasn’t terribly interested in this little cosmetic mechanic, but to my daughter it was a matter of life or death that she locate the best, cutest hats, and proudly wear them around. Interestingly, she didn’t care at all what I was wearing on my Phog head, even though I was at the other end of the same body. Blue Phog sucks, Red Phog rules, I suppose. 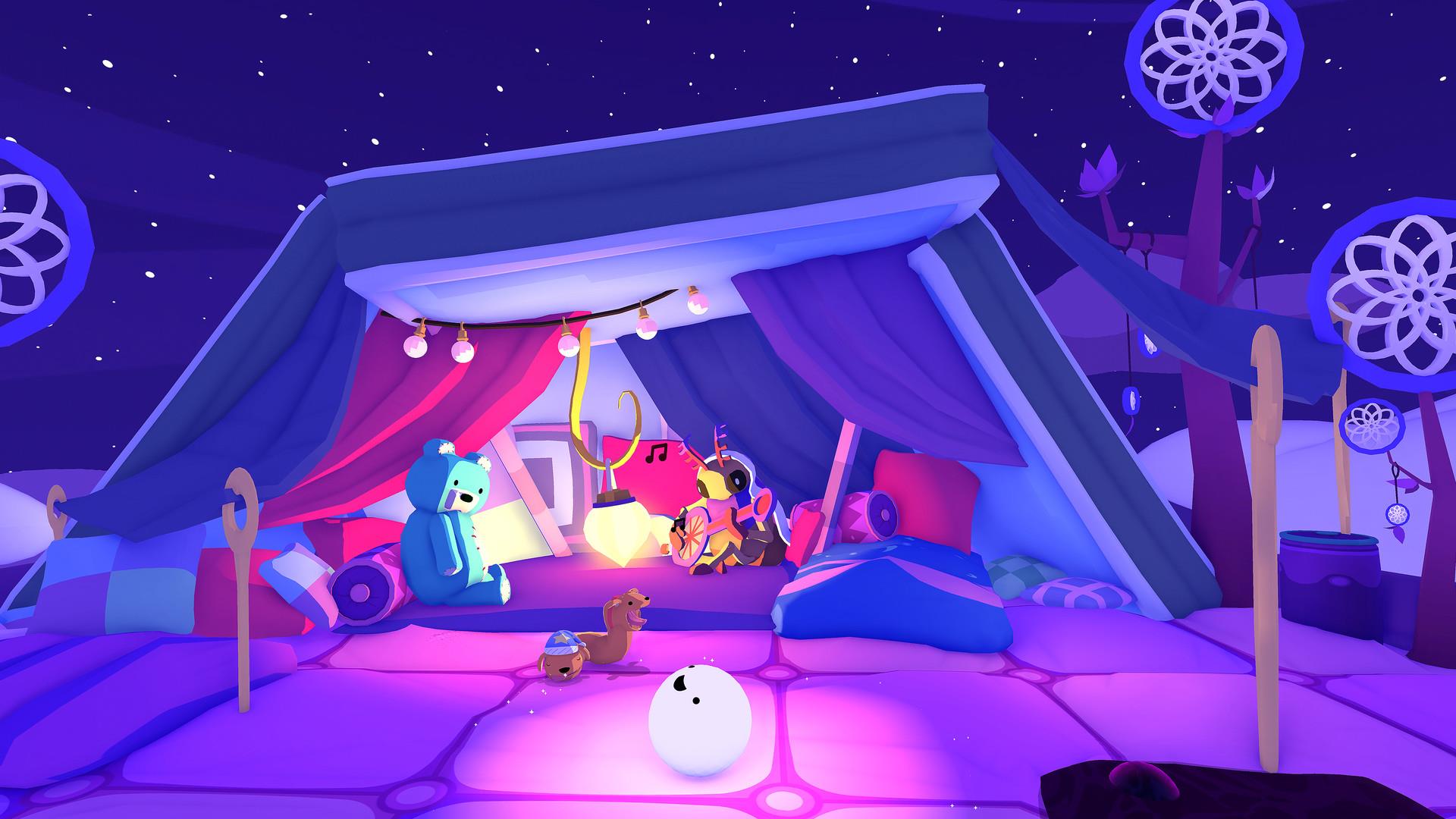 PHOGS! is a clever, gentle game that exudes a feeling of warmth throughout its playtime. The Phogs themselves could easily inhabit a successful series of children’s books, followed a few years later by an Amazon Prime television series (In fact, don’t be surprised if this happens. If I were a TV exec, I would already be making calls). The entire enterprise feels welcoming and familiar, and a great deal of fun can be had just rolling around as a Phog and barking. My daughter got no end of amusement simply wandering Food World and eating everything in sight, watching our Phogs swell up. This is a very cute game, in the most non-derisive way “cute” can be used.

PHOGS! is a great game to play together with family and friends, and I found it as a great way to engage my family’s minds while tricking them into thinking they only having fun. While my review may make it seem as though I see PHOGS! only as a family game, there is a lot here for adults to enjoy. Take a look at the Phogs character. If this looks like something that appeals to you, then I can assure you that you will enjoy this game.

PHOGS! is a great two-player co-op puzzle game with just enough floppiness to make executing the solutions challenging. Never frustrating but always satisfying, PHOGS! is a solid choice for kids or adults. Gorgeous storybook art and fantastic music keep PHOGS! warm and fun, and a simple control design makes the game accessible to a wide range of audiences. Clever, charming, and fun.