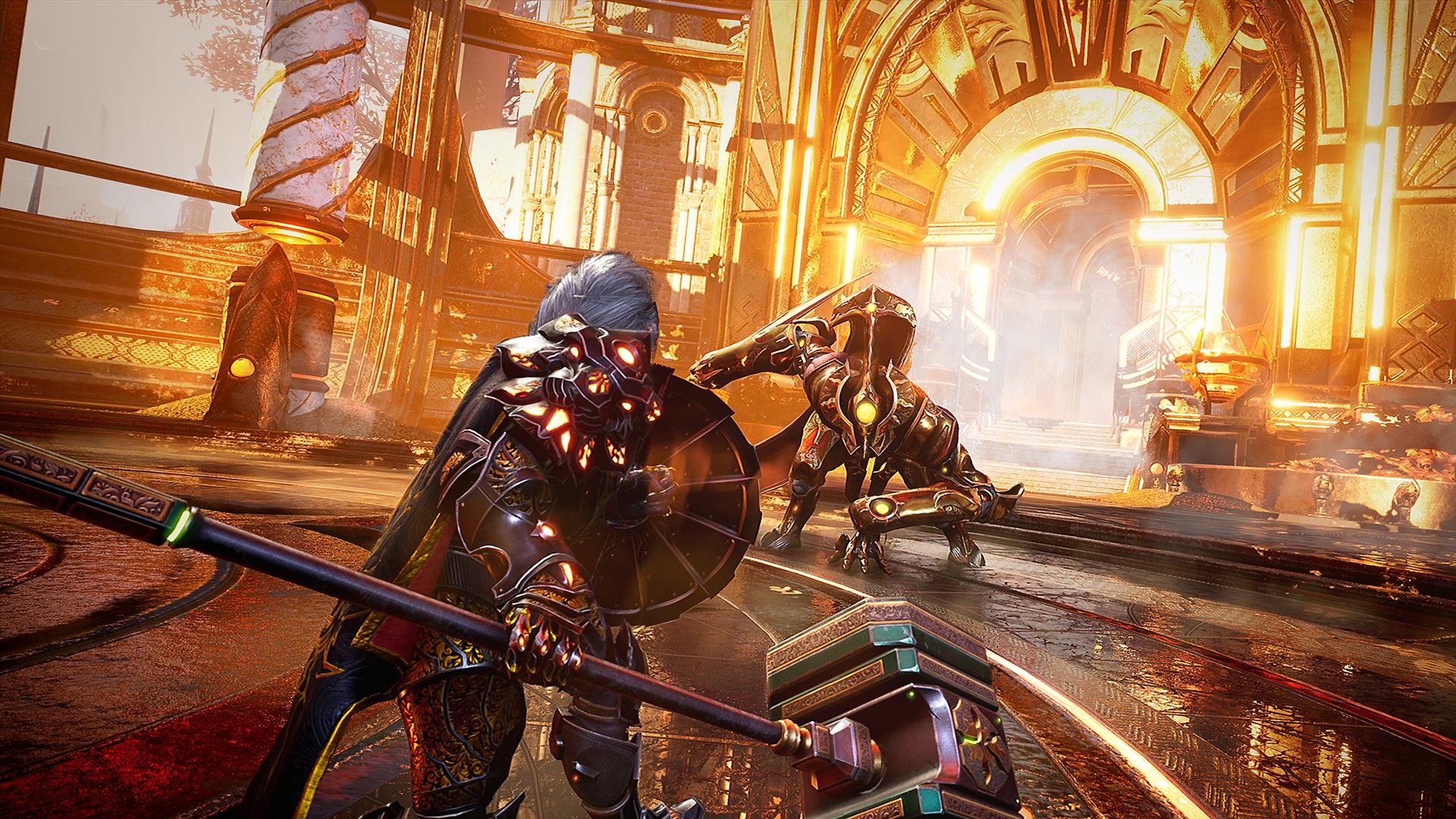 On the surface, Godfall looks like an incredible experience.

The blueprint for this game reads like a tried-and-true AAA success: Play as incredibly powerful knights, armed to the teeth with weapons and armor, able to summon forth various abilities and powers, cutting down anything that’s in your way, while being in awe of the atmosphere and visuals on screen. It seems like the absolute perfect formula for success. Sadly, that’s not the case. Godfall looks incredible, but that’s where the praise ends for this extremely average action RPG.

There’s no denying the beauty of Godfall’s world

Going through the initial loading screen and opening sequence, Godfall commands your attention. The game is visually stunning in every sense of the term. Beautiful foliage awaits you at every step in your journey, and it truly is breathtaking. The detail on both the player and enemy armor is fantastic and there’s no better spot to look at it than in the armory where you unlock the various valorplates that you work towards getting. It gives the player a goal right out of the gate once the initial missions are completed, and that’s to the game’s credit: Players can not only look up the best stuff but they can see it and practically touch it. More games should do this as I’m quite a fan of telling the player, “Here are the big shiny items. Come get them.” 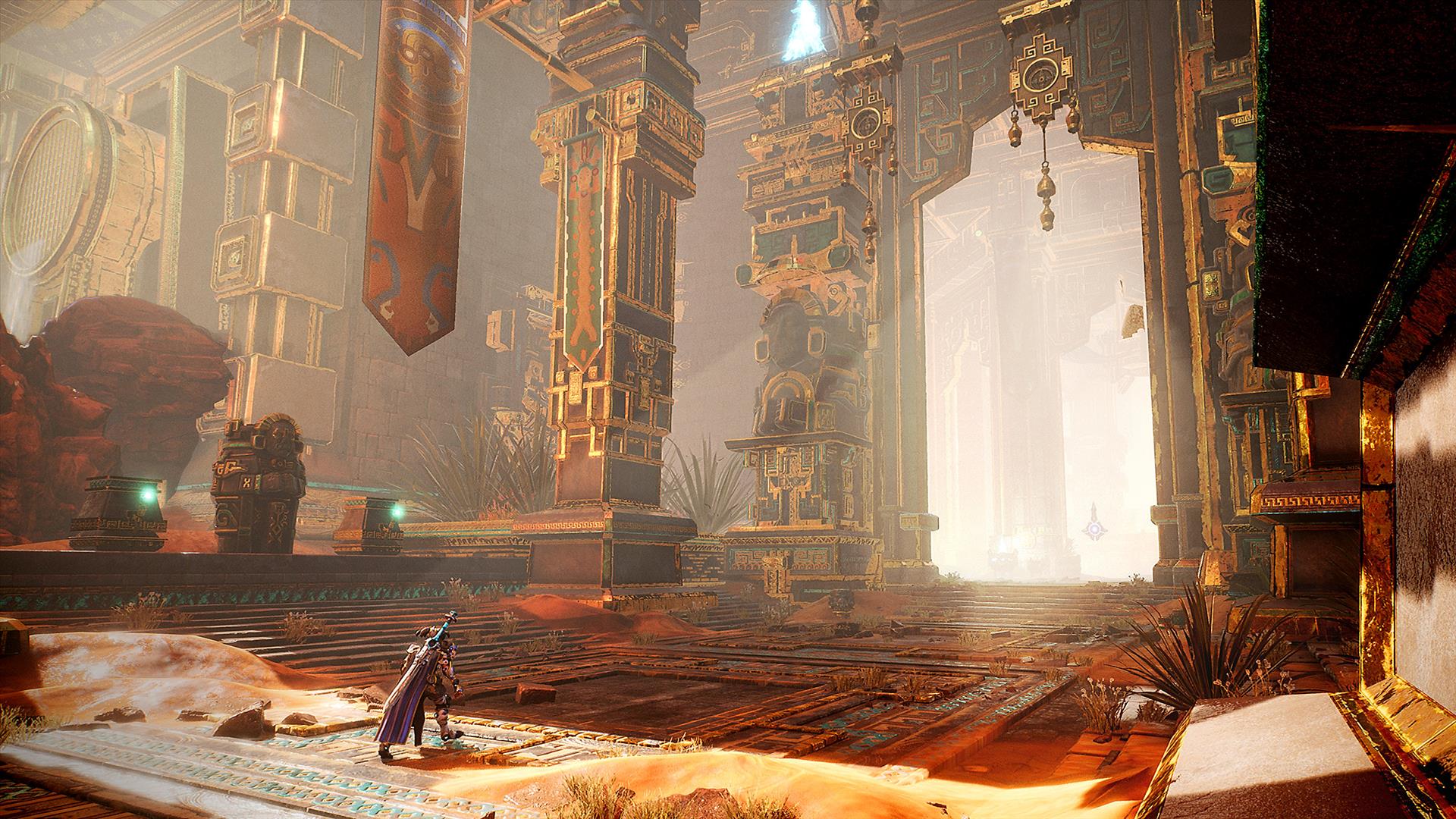 The action sequences are also quite enjoyable. While the story itself is somewhat of a dud—two brothers trying to kill each other after a kingdom split in two due to betrayal—the voice acting is decent and I felt like these cutscenes that helped flesh out what little story there was were easy to sit back and enjoy. That being said, the scenes followed a similar formula and I found myself skipping them after a few views.

Godfall has three zones that Orin, the protagonist, will travel to: Earth, Air and Water. While the missions themselves have different goals and end points, sometimes you’ll find yourself in remarkably similar zones and repeating what you’ve done. The reason for this is that there are extra missions that are unlockable in the areas. Usually these are unlocked by finding specific items or achieving certain goals. Honestly, I didn’t worry about the side quests too much as they were repetitive. At least the areas look great.

Somewhere in Godfall is a fleshed-out combat system that has endless amounts of options and challenging fights. However, the final product that I played does not have it. Yes, there is a skill tree with numerous options to unlock, each one with a different level of mastery. I enjoyed the initial fighting, especially being able to fling my shield at enemies like I was Captain America. But playing this game on a keyboard and mouse was a chore at best and frustrating at worst. 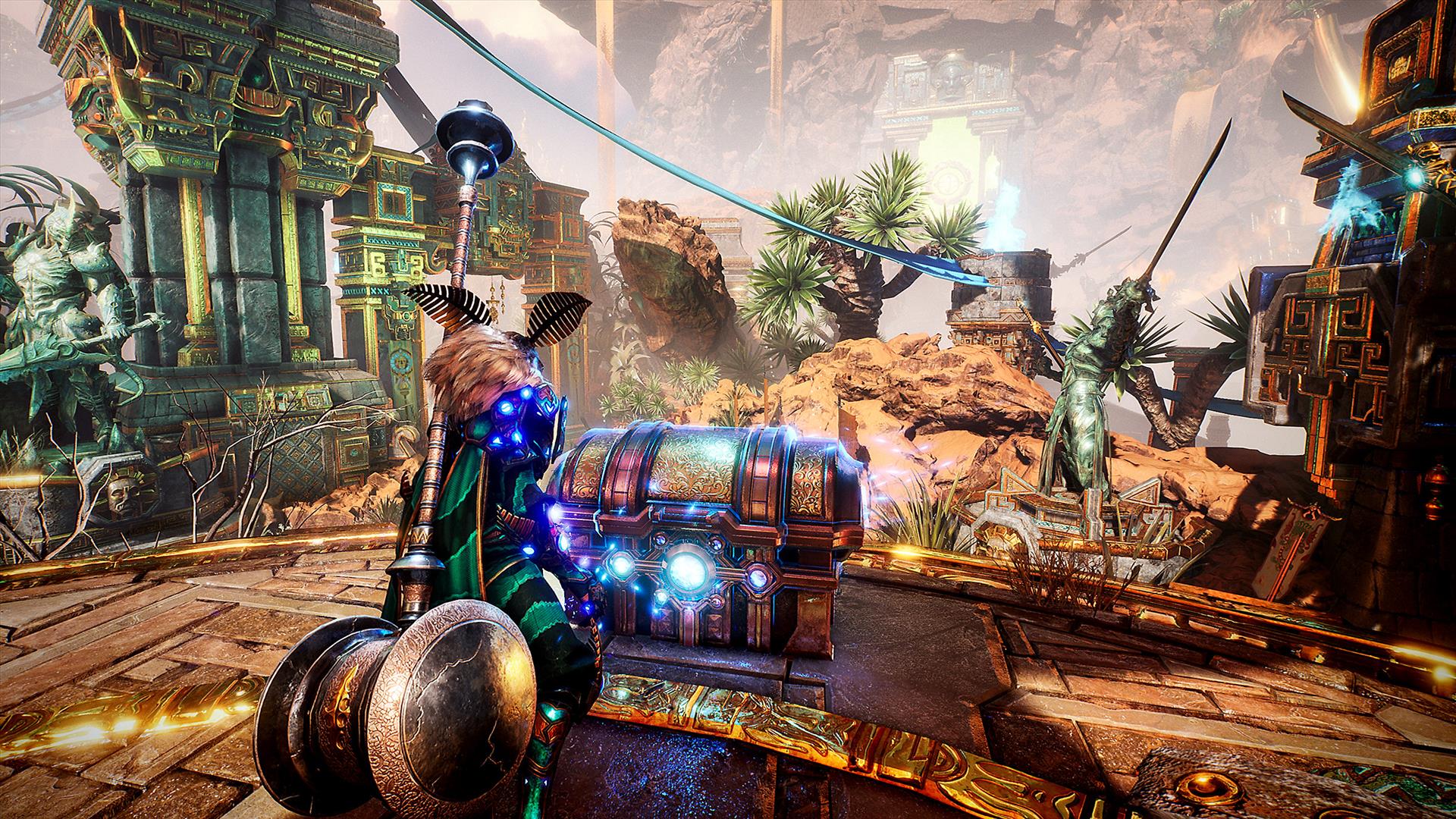 You’re sold the story early on that your brother chucks you off a cliff and you survive. It’s time for payback but you only have the basic combat skills because…reasons. Honestly, the story never gets fleshed out enough for me to have cared about it. The combat does hook you early on and it’s easy to get lost in the world while you’re killing enemies, but the formula is the same: Spawn in, kill enemies, roam around, kill boss. Rinse. Repeat. The story is secondary because all you care about is trying to unlock the valorplates while some celestial voice is yelling at you not to die, and she can really get snarky each time you kick the bucket.

And therein lies another big problem with this game: Death really has no meaning, except on the hard difficulty.

In easy and normal mode if Orin dies (and believe me: You’re going to die), all that happens is you’re returned to the last checkpoint and proceed as normal. The enemies that killed you will be there, but all damage they’ve taken will remain. Any enemies killed after the checkpoint before you died? They’re still gone. That seems like a big miss for me. Checkpoints are perfectly fine, but I should not be able to just charge head first into battle, do some damage, die, and then be rewarded for this. 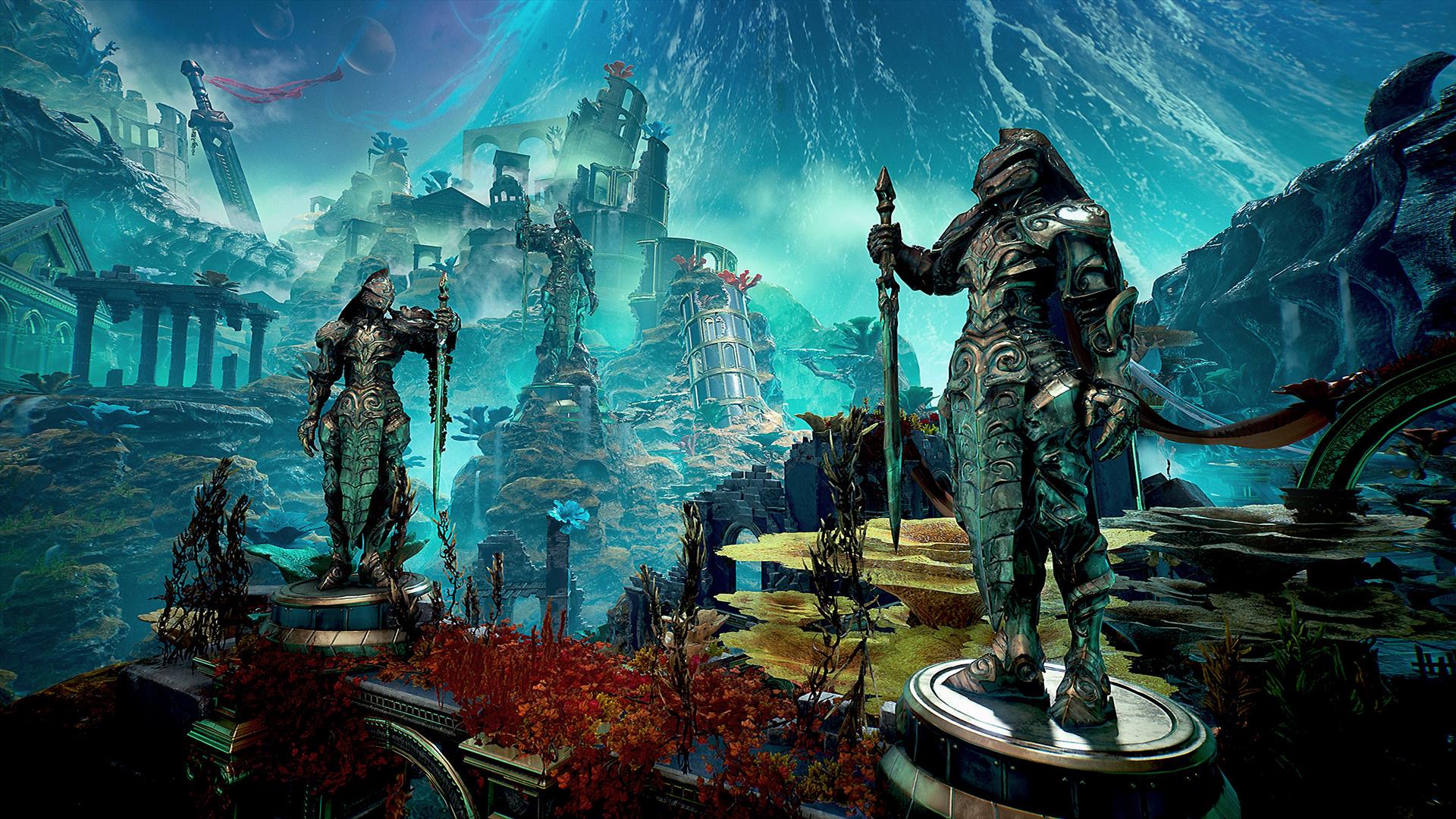 The big problem is that it’s the same for boss battles, and that’s a dealbreaker for me. Boss battles should be a challenge and players should be punished for not changing up their tactics. In Godfall, unless it’s hard mode where you get three attempts before the mission fails, you aren’t punished other than being pulled back a bit of distance. While some gamers may enjoy that, I do not. It’s cheating in the worst way: The game is telling you it’s okay to not improve.

There’s a great game in here somewhere, but it’s just a jumbled mess

This might be the most frustrating thing about Godfall: All the elements are there for a pretty quality action RPG. The leveling system certainly isn’t terrible, but it feels like all the skills kind of blend together at once. I also found that simply alternating between normal and heavy attacks worked just as well as any form of a special attack. Mix in a little dodging here and there and that’s about all that’s needed. The game essentially limits itself with just the three primary areas and only scaling enemies basically for boss battles.

I have a hard time pinpointing where this game truly goes off the rails because it’s just a lot of things added up into one massive problem. Ultimately, it comes down to the lackluster story and the game removing penalties for dying, as I stated before. I’ve experienced so many highs and lows with this game because I’ll be running through the areas just in awe of how beautiful it is. Five minutes later I’m frustrated because I’ve died at the same boss four times and yet his health is still missing. Why play the game if I don’t have to work for it?

If I could reset this game, I’d start with the lack of penalization for deaths. Make me work for my levels and loot. Force me to change my tactics. I’d also add in two more difficulty levels between Easy and Normal, then between Normal and Hard. The jump from Normal to Hard Mode is a harsh one and is probably too much for someone to try out early on. I don’t have many problems with the leveling system, but feel like a lot of it could have been expanded in a lot of cases. It just whiffs at the wrong time for me.

Wrap-up time: Should you buy this game?

Look, it’s gorgeous. I will sing this game’s praises about the beauty it brings with the environment, armor, atmosphere and so on. The combat is cookie-cutter levels of boring after a couple of hours and I just feel there’s no real challenge to Godfall whatsoever until you jump to hard mode. This game seemed to want to sell itself as Diet Dark Souls and went far too hard on the diet part. There’s a pretty brilliant game that might get pieced together down the road with add-ons, patches, etc. Right now? Don’t waste your time.

A visually stunning game, Godfall suffers from repetitive combat and a lackluster story that is forgettable after the first hour. In an industry with so many Dark Souls-style games, this is not one to spend time on.