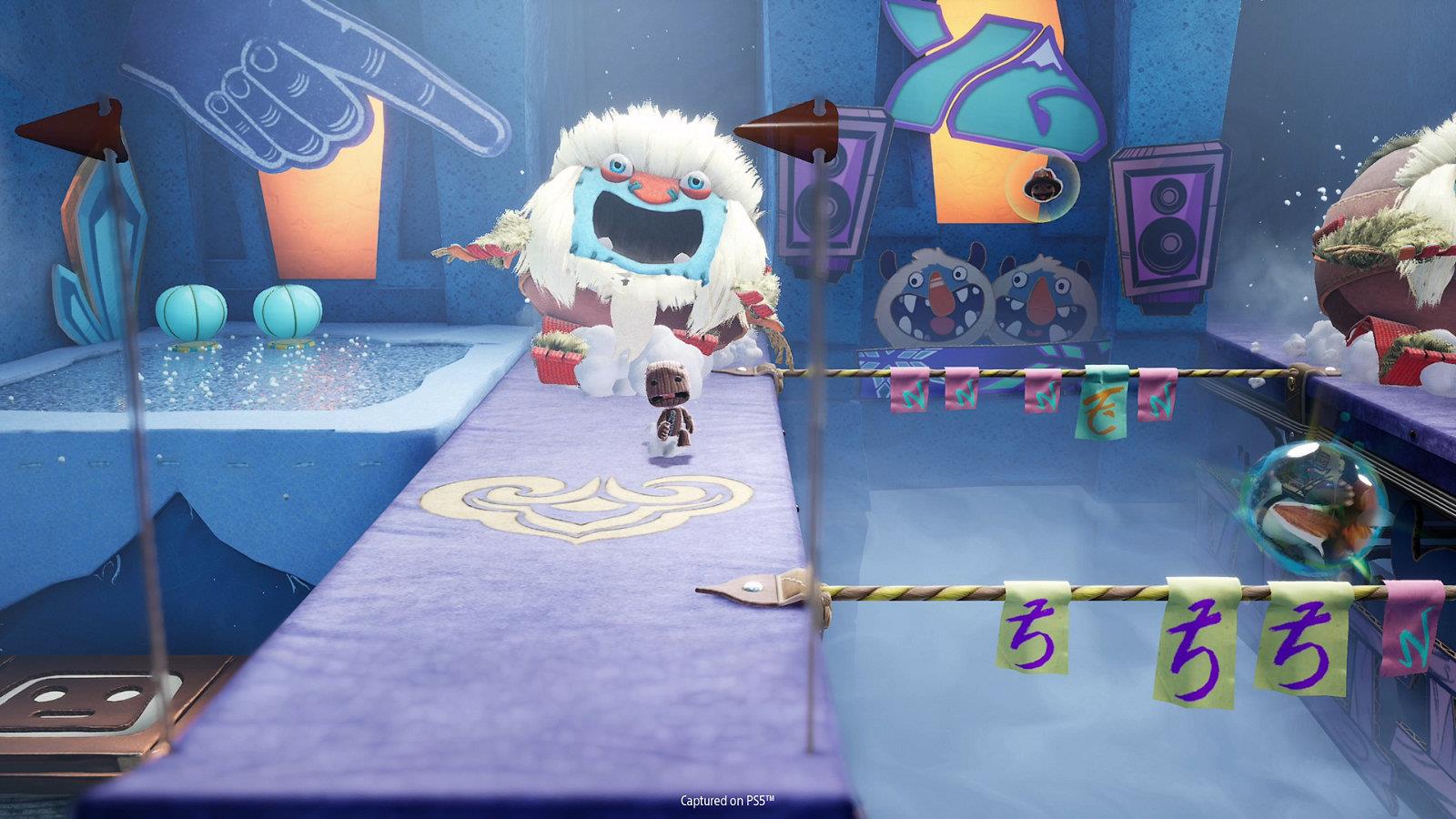 The opening shot of Sackboy: A Big Adventure is one of the most impressive displays of raw next-gen power I’ve seen. The camera swoops down over Crafttown, home of Sackboy and his Sackpeople clan. Crafttown, like the rest of Sackboy: A Big Adventure, is cobbled together from digital representations of various real-world materials. Cloth and aluminum foil, silk and cardboard, fluttering flags, floating balloons, and billowing cotton smoke all combine to construct a fairy tale world of creativity. The overall effect is revelatory, and sets the tone for this visually dazzling game.

Though I’ve seen this effect in every Little Big Planet game, it has never been rendered so clearly, in such stunning detail. It has certainly never looked so real. Sackboy: A Big Adventure looks for all the world like an impossible moving photograph, a living scrapbook window into an alternate universe. My jaw literally dropped, and having spent some time playing a few of the more disappointing PS5 launch titles, my initial thought was, “Oh, this is more like it.” 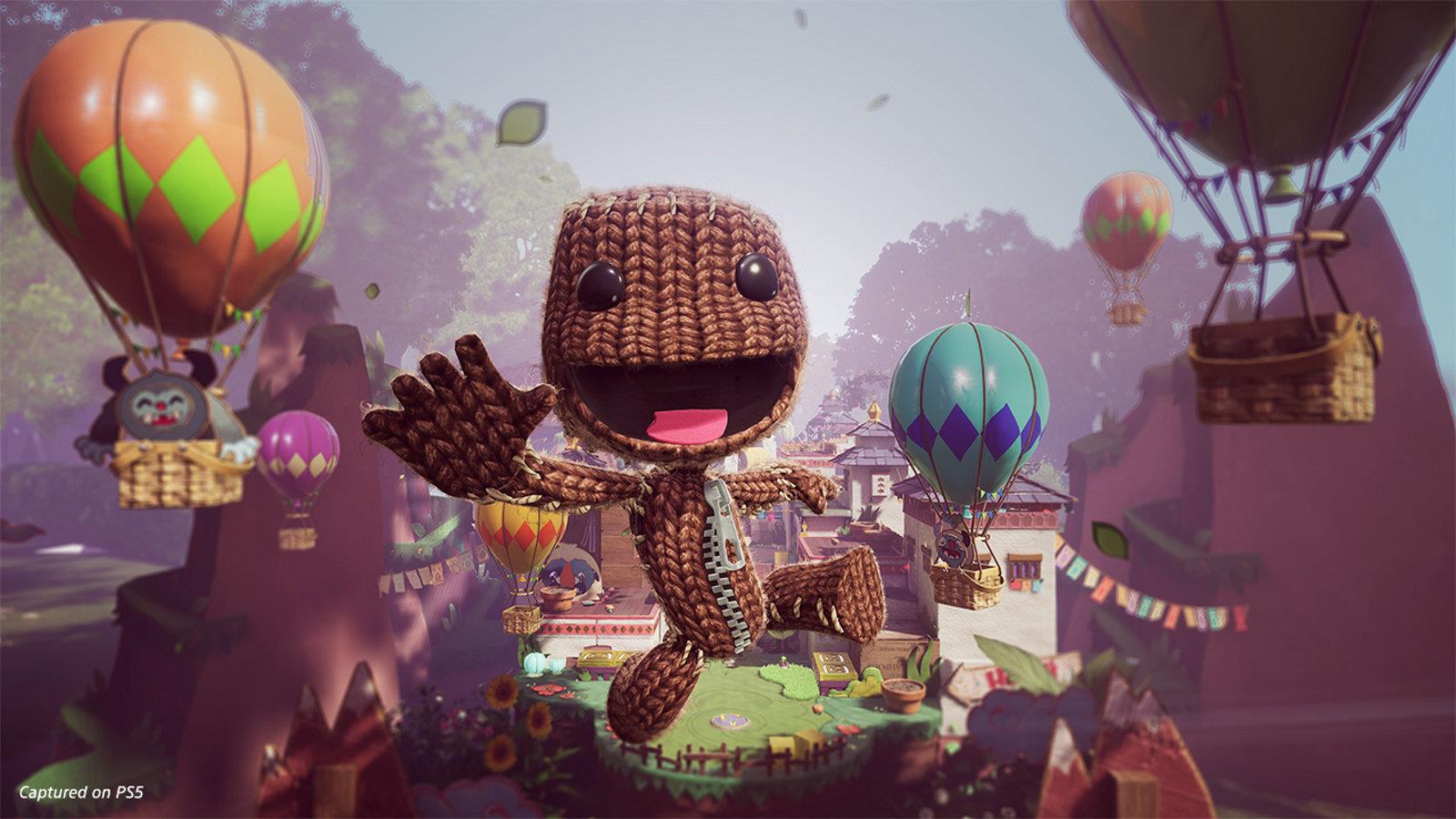 If you are expecting me to turn on a dime here, and start talking about how my initial impressions were overly optimistic, I’m afraid that I’m going to have to disappoint you. Sackboy: A Big Adventure starts out strong, and it stays strong. Visually, this is one of the most beautiful games I’ve ever laid eyes on. Luckily, the gameplay is every bit as clever, ringing in the launch of the PS5 with the best platformer I’ve played since…I don’t know…the first Banjo-Kazooie?

When it comes to platformers, Sackboy doesn’t reinvent the wheel. But it does cover that wheel in tinsel and glitter, slaps stickers all over it, and rolls it down a hill to the beat of some amazing tunes. Sackboy isn’t interested in forging new ground – it is here to entertain you.

And entertain me, it did. For most of the first half of Sackboy: A Big Adventure, I sat with a silly smile on my face while the game did all of the heavy lifting. This was before the cursing started, which is also a hallmark of a great platformer. After a quick story section kicks things off – a bad guy named Vex kidnaps all the sack people, setting off a crafty rescue mission – Sackboy sets off on a journey across five delightful worlds, each of which contains maybe 15 levels. 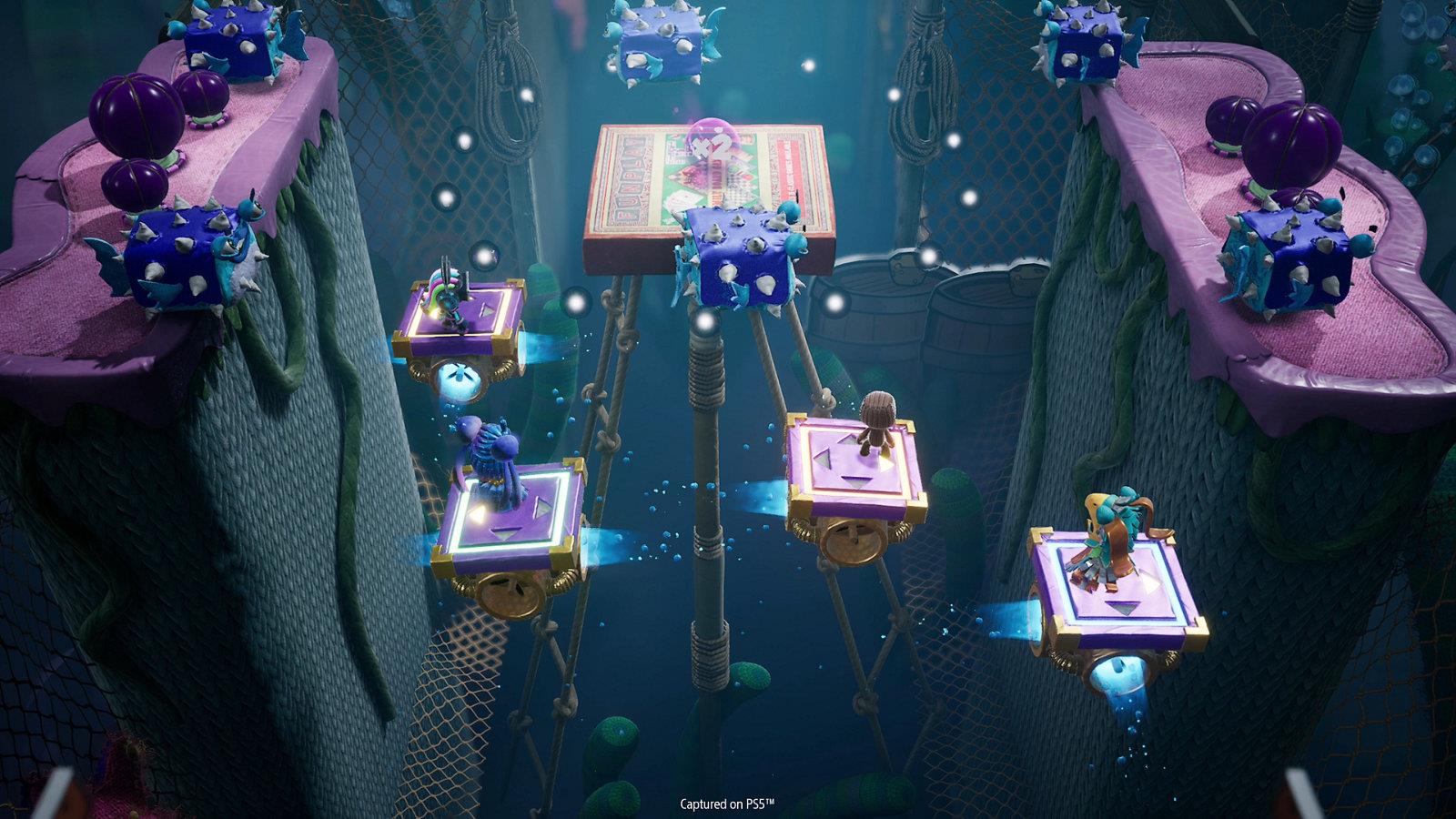 What is remarkable about this game is that each level introduces some new mechanic that the game hasn’t previously used. If you are doing the math, that means that there are around 60 unique mechanics at play in this game, and every one of them is polished to a brilliant, tinfoil shine. The wellspring of creativity on display here is unprecedented, with Sackboy picking up a variety of new powers in different levels – everything from boomerangs to rocket boots to glue feet. But it isn’t the powers that are remarkable, it’s the way that Sackboy: A Big Adventure uses them.

Each level is meticulously constructed to allow Sackboy maximum use of whatever special ability is currently at his disposal. Rocket boots are greeted with seemingly unavoidable lasers and overly long gaps to traverse, causing the boots to sputter and die just as you are reaching the other side. Boomerang levels are packed with stuff to…boomerang, exploding in the most delicious manner possible in bursts of sound and light. I’m purposely avoiding revealing many of the abilities, as it is more fun to discover them for yourself, but it is important to note that even when the game starts recycling Sackboy’s powers, the levels constructed around them always offer a unique and unexpected twist on what came before.

Levels are bathed in color, and as the game progresses, no small amount of challenge. Players run, jump, fly, and roll through levels, picking up collectibles and hunting for secrets. Level by level, things ratchet up nicely, to the point where I was actually occasionally running out of lives and having to restart. This, of course, is infuriating, but Sackboy steadily walks the line with the right type of infuriating. Things never reach an unachievable level of difficulty, and I never felt that Sackboy was being unfair. In fact, the controls on this game are so tight and precise that it could be used as a lesson plan for aspiring platform makers. I never once felt cheated while playing Sackboy, regardless of what I yelled at my TV.

The rock-solid gameplay is complimented by the visual splendor on display and the stunning soundtrack. I may use the words “amazing soundtrack” too often, and that overuse may render such claims ineffective, so let me hammer this point home: Sackboy: A Big Adventure may have the best soundtrack I have ever heard in a game. Not only are the original tracks all earworm-y delights, but the composers behind Sackboy also manage to insert delightful reworkings of familiar pop tunes into the background, causing some “Wait a minute…is that sea shanty actually Depeche Mode?” moments that are absolutely revelatory. Even my tiny kids were picking up on songs they recognized (thanks to the Trolls film franchise for gifting them with a cursory knowledge of pop history). 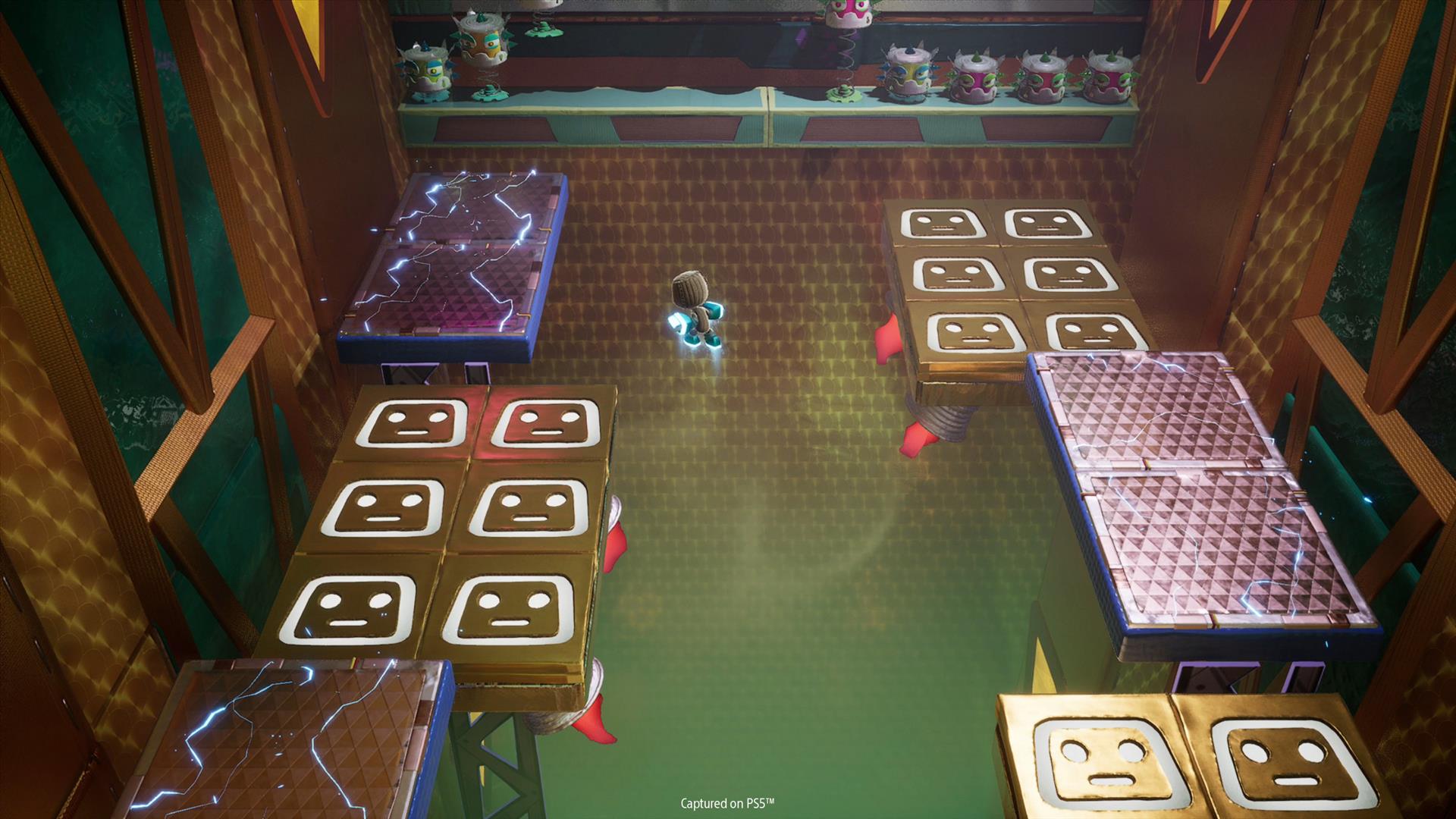 I cannot express enough how delightful the music in Sackboy is. Every level has its own unique and memorable theme. Things crescendo about once per world where the game designers decide to crank things even higher, setting entire levels to licensed pop songs. I won’t reveal which songs are used in the game, but every real-world track is of the “Oh my God, how much did they pay for that?” variety. These songs appear out of the blue, with no indication that they are coming, and when they do the entire Sackboy world bursts to even greater life in rhythm to the music. Platforms bounce along to the beat. Bad guys march in time. Animated backgrounds move in sync with the lyrics. Some clever manipulation ensures that the entire level stays in time to the music, no matter how long you meander around and take in the sights. The first time one of these levels kicked off, I was beyond delighted, clapping my hands at the developer’s audacity like a little kid.

Speaking of kids, my own children adore watching me play this game. My seven-year-old is capable of running through some of the levels herself, and my four-year-old treats the entire thing like it is a Pixar film – which it actually quite resembles. Every time I try to pivot to another game, anguished cries from my brood insist that I continue with Sackboy. Further tortured pleas demand that I wear their Sackboy costumes of choice, and my son continuously demands that I play the level where I “save the baby monkeys”. 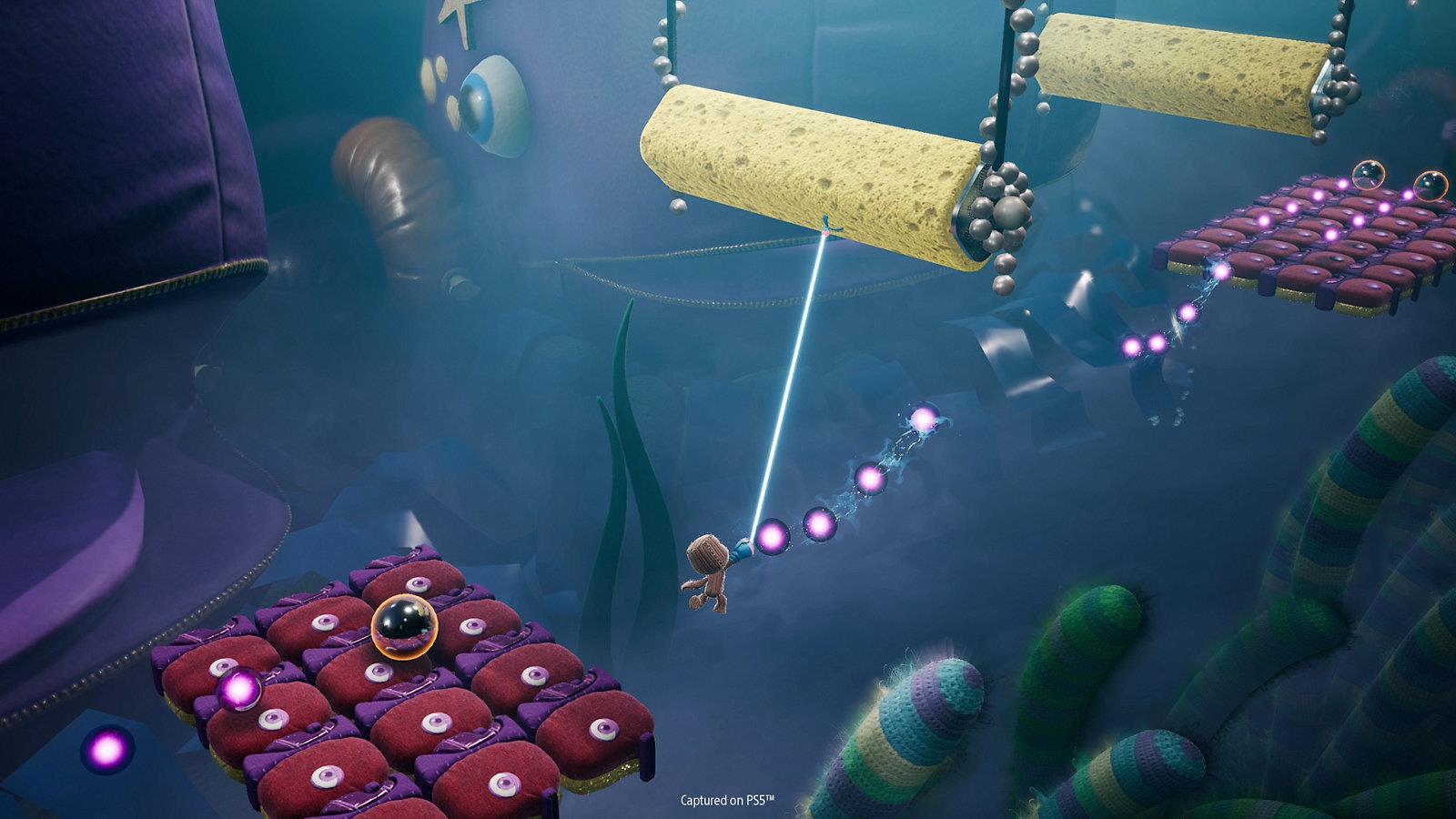 So yeah, Sackboy is a hit with the entire family. Though we haven’t been able to try out the local multiplayer yet (my second controller is trapped in shipping purgatory), I’m sure the game will gain further life once it arrives. The upcoming online multiplayer patch will likely drive that extended use even further. Sackboy has entered my family’s psyche, and he is here to stay.

The only thing holding me back from slapping a big, fat “perfect” score on Sackboy is a bit of an issue that I’ve had with the game’s pacing. Every level in Sackboy has players hunting down a series of hidden orbs; the number of orbs varies from level to level. The locations of many of these orbs are obvious, but about half of them are deviously hidden (or they whiz by in a flash), requiring a great amount of exploration or some extremely quick-witted platforming to collect. At the end of each world, Sackboy has to pay up, dropping a number of orbs to pay his toll on a rocket ship to the next world. In the early game, this is no problem, but the tolls expected in the late game are steep, forcing the player to backtrack into earlier levels to replay them and comb for orbs. When I am marching towards the climax of a game, the last thing I want is to go back to the beginning and replay the entire game, searching for widgets in order to progress. 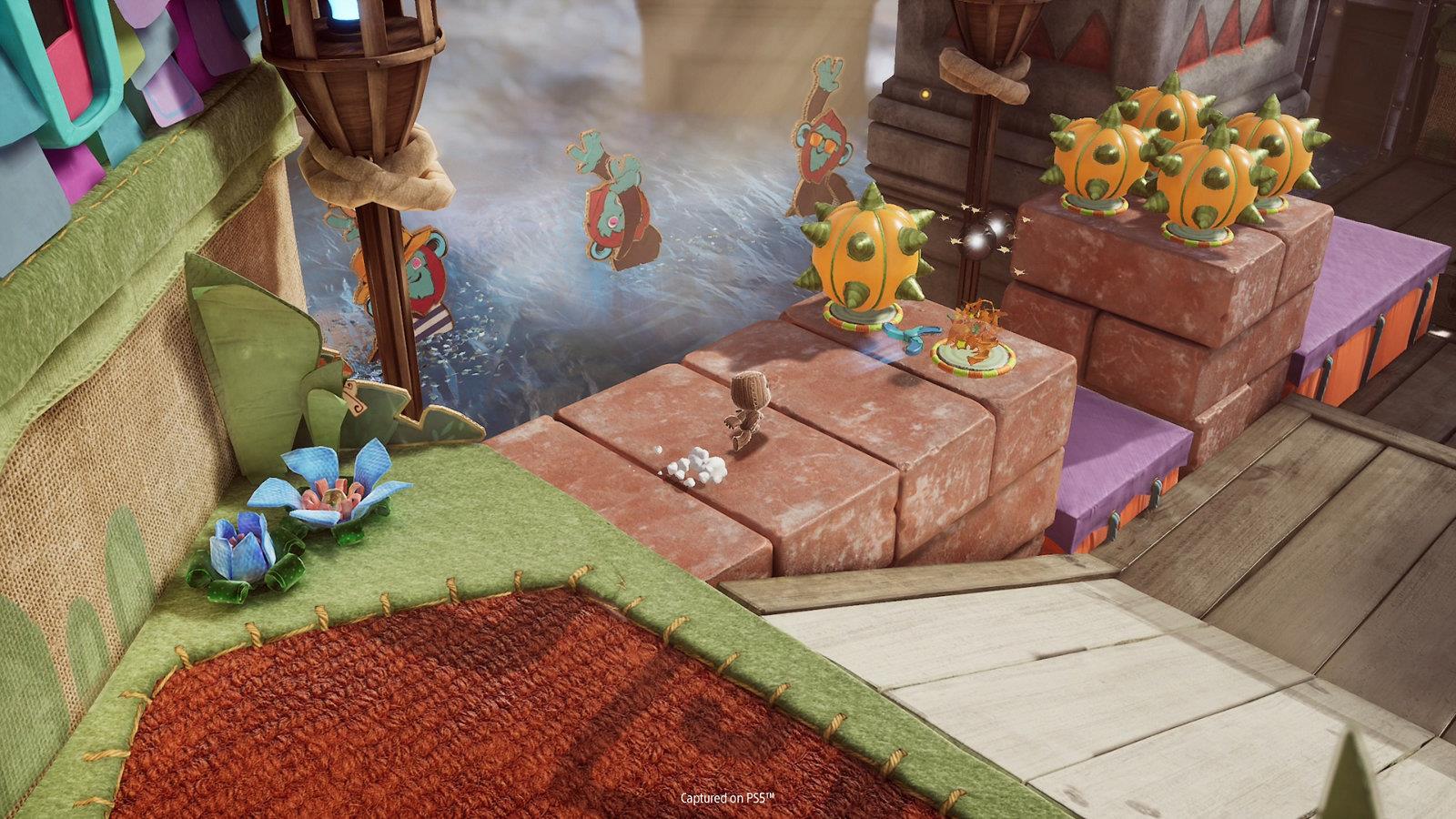 But pacing issues aside, Sackboy: A Big Adventure is a video game marvel, and is one of the best displays of PlayStation 5’s power available at launch. Light, color, and sound combine to create an infectious concoction that will delight your entire family. Sackboy: A Big Adventure is a living artwork, an amazing patchwork spectacle with wicked tight gameplay and ripping good tunes. It is amazing that video game technology has progressed far enough for something like this game to be possible. But it is even more amazing that anyone in the world has the level of creativity to manifest a game as great as Sackboy: A Big Adventure. This game is a classic.

Sackboy: A Big Adventure is an audio-visual feast, a living work of art that continuously delights and amazes players with its bottomless well of creativity. Some pacing issues can't do much to detract from the amazing level design, tight platforming, and astounding soundtrack. Sackboy is a pure delight.