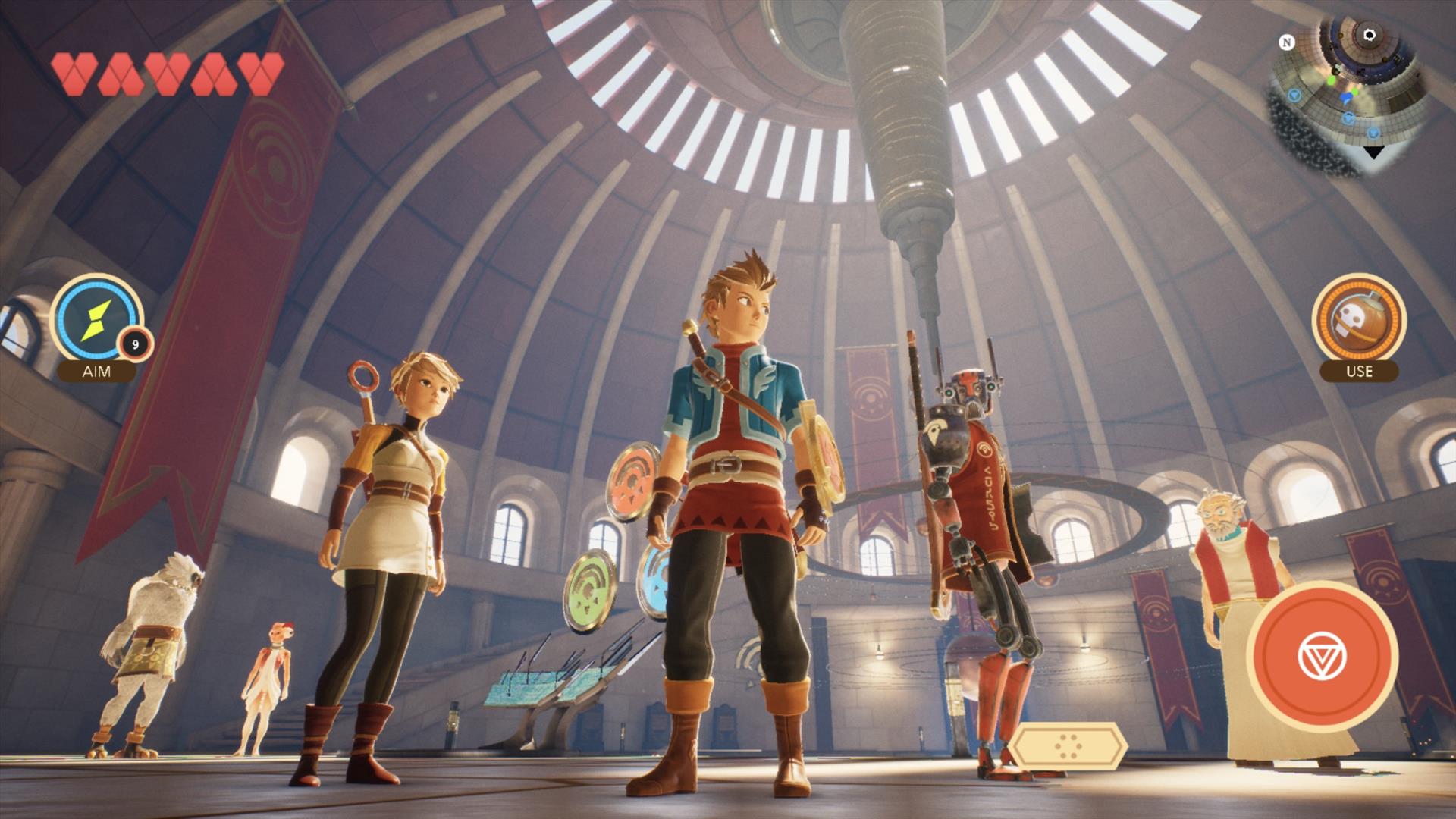 Oceanhorn 2: Knights of the Lost Realm

I’ve stated in past reviews that I’m a sucker for 8-bit and 16-bit games, be they older NES and Super NES games or newer games created in those styles. Something else I’m a sucker for are games that bear a resemblance to another series I enjoy. With the popularity of The Legend of Zelda over the years we’ve seen games released that are similar in style going back at least as far as Neutopia on the TurboGrafx-16.

I haven’t played the original Oceanhorn, but when I looked at Oceanhorn 2: Knights of the Lost Realm and saw how much it resembled the later Legend of Zelda games, I figured I’d give it a shot. The question now is if it’s as good as one of Nintendo’s biggest franchises. Given that this is the second game in the series, I’d say the first option might be correct, but let’s take a look at Oceanhorn 2: Knights of the Lost Realm on the Nintendo Switch and find out. 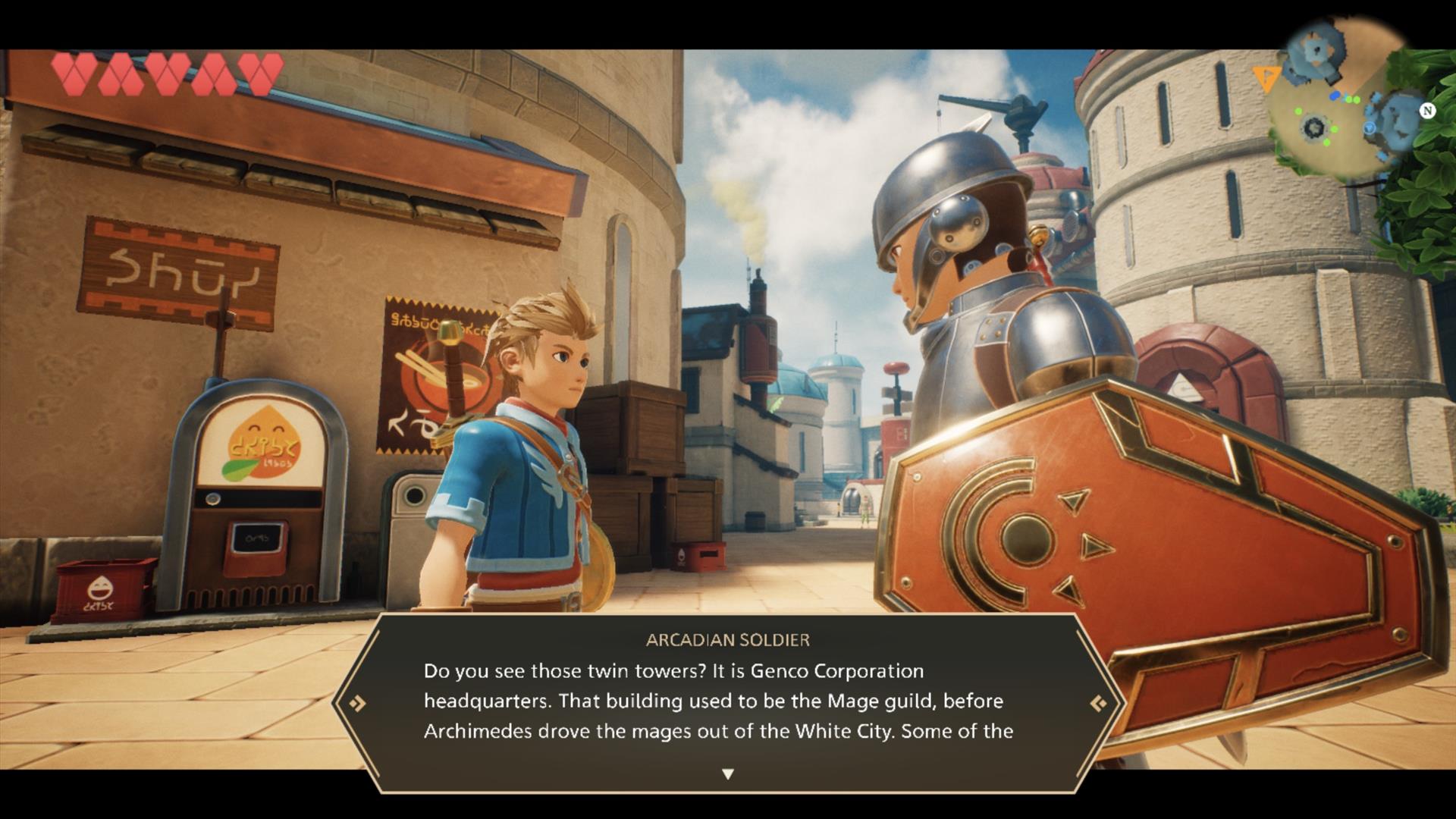 Set a thousand years prior to the events of the original game, Oceanhorn 2: Knights of the Lost Realm sees a knight in training named Hero, along with two other knights named Gen and Trin, who learn that a demon named Mesmeroth is planning to take over the Kingdom of Gaia. To prevent this the trio must journey to find the three Sacred Emblems of the Sun, Earth, and Ocean. The first thing you might notice about Oceanhorn 2 is, as stated, its resemblance to the later Legend of Zelda games, in particular Breath of the Wild or Skyward Sword. As I’ve learned in the past though, just because a game looks similar to another series doesn’t mean it plays like one.

You begin the game with your sword and a Caster gun that can initially just shoot out bullets, but over time you’ll acquire several spells you can use such as fire, ice, and lightning. You’ll also pick up some other items such as a bomb and grappling hook that you’ll use to traverse the world of Gaia and help solve puzzles, though sometimes using all of these items and elements can be more puzzling than the puzzles themselves. 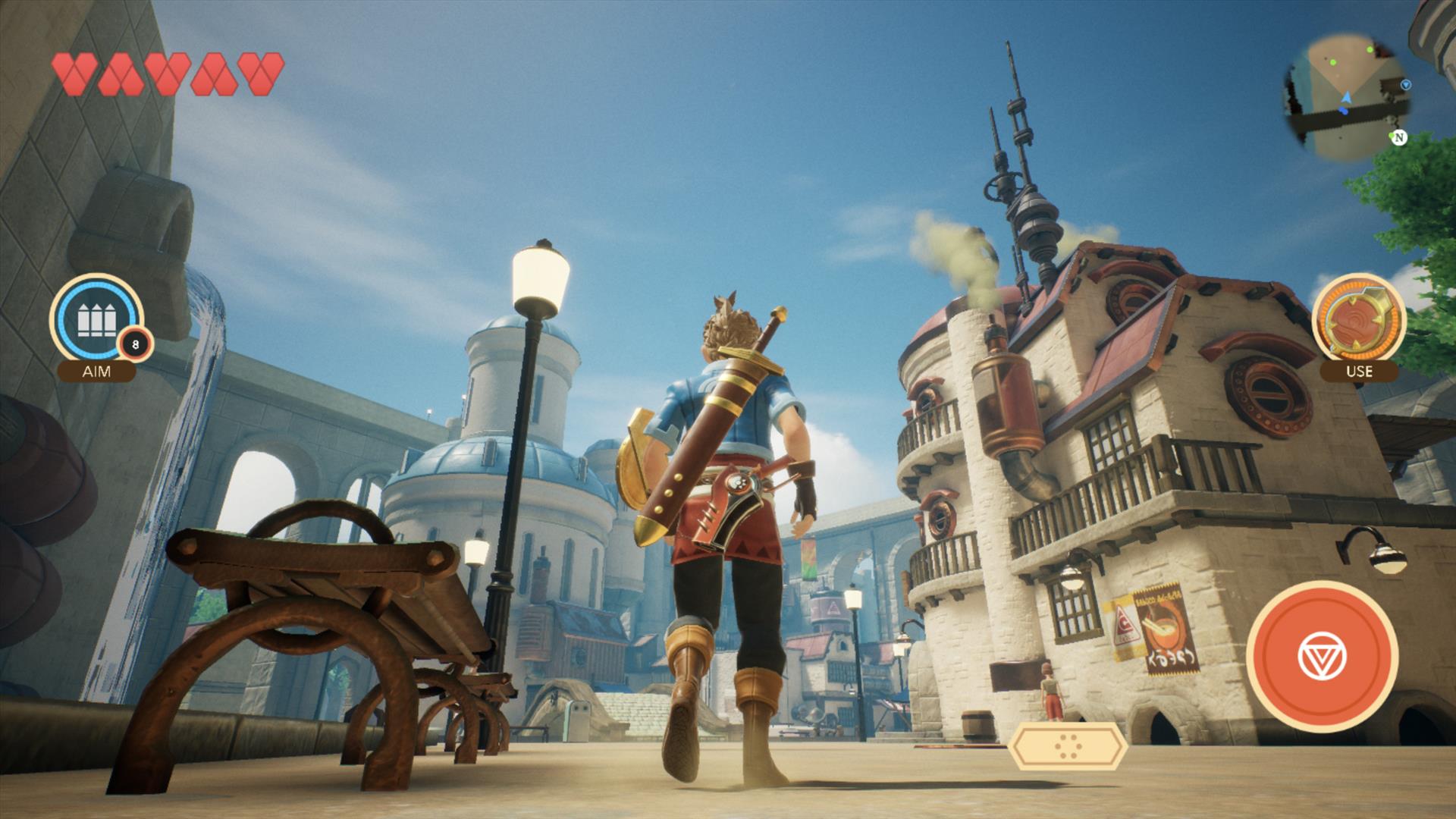 In The Legend of Zelda games where you have bombs or a Hookshot, you can use them, and then once the animation is complete (or explosion in the case of bombs) you can immediately use them again. This isn’t the case in Oceanhorn 2 as when you use those items. You actually have to wait for them to charge up again. Granted it’s not a long wait, only a few seconds, but it’s still weird to have to charge up a bomb or even the Grappling Hook to be able to use it again. Even shots from your Caster have to charge after use, meaning you can’t rapid fire shots against enemies. The combat itself can be a bit tedious as enemies can be rather relentless, even in the early game.

You have a shield to defend yourself which takes a small bit of stamina away every time you block an attack; stamina recharges after a few seconds. However, you can’t swing your sword unless you let go of the shield button, and using your shield is the only way I’ve found to strafe around an enemy. Given how cameras can be in 3D action games the lack of a lock-on button makes combat a bit more tedious than it should be. Throw in having to dodge after nearly every hit since the enemy will usually take a swing at you afterwards and combat can be a bit of a chore, especially early on. Thankfully throughout your journey you can find various shards that you can insert into your weapons and items to strengthen them in a couple of different ways, including how much damage your sword can do. Items can only have two shards inserted into them at any one time but you can remove and change around shards at your convenience. 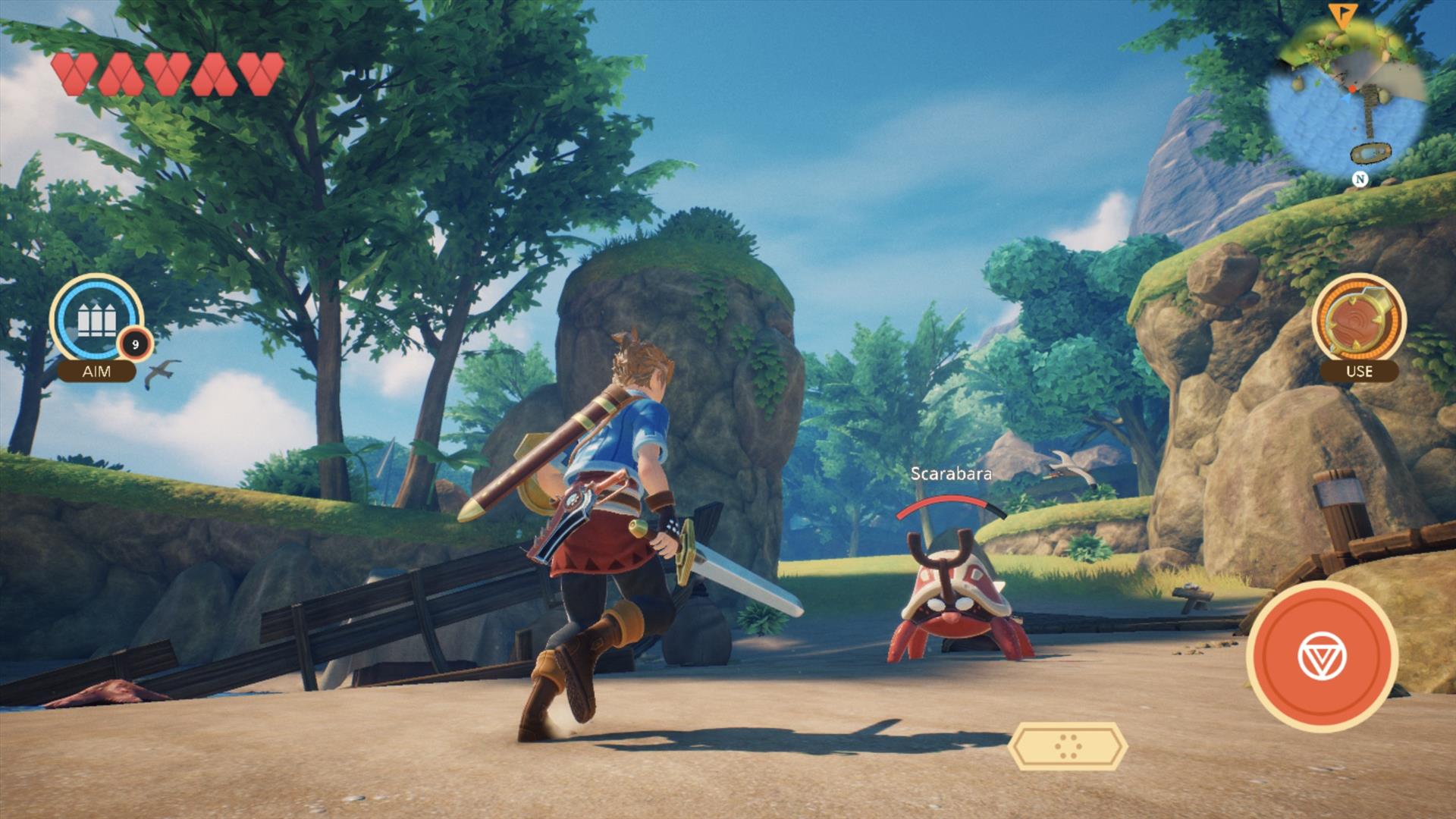 Thankfully you aren’t alone in your quest. You’ll be aided by Gen and Trin throughout your travels. Gen has a sword while Trin uses a boomerang-type weapon that has blades on it letting her attack enemies from a range. You can also have Gen and Trin attack specific targets, have them follow you or stand on switches, and even have Trin hit levers from afar to solve puzzles. I’ll get more into it in a bit but the puzzles are my favorite aspect about the game…to an extent.

In games like this that has various puzzles throughout the game, it’s a great feeling when you’ve studied a room or area for a bit, take in your surroundings, and figure out how everything works to solve the puzzle. Solving a puzzle should come from taking it all in and seeing how everything works together, not by stumbling upon the answer by sheer luck. Early on there are a couple of times where the latter came into play. 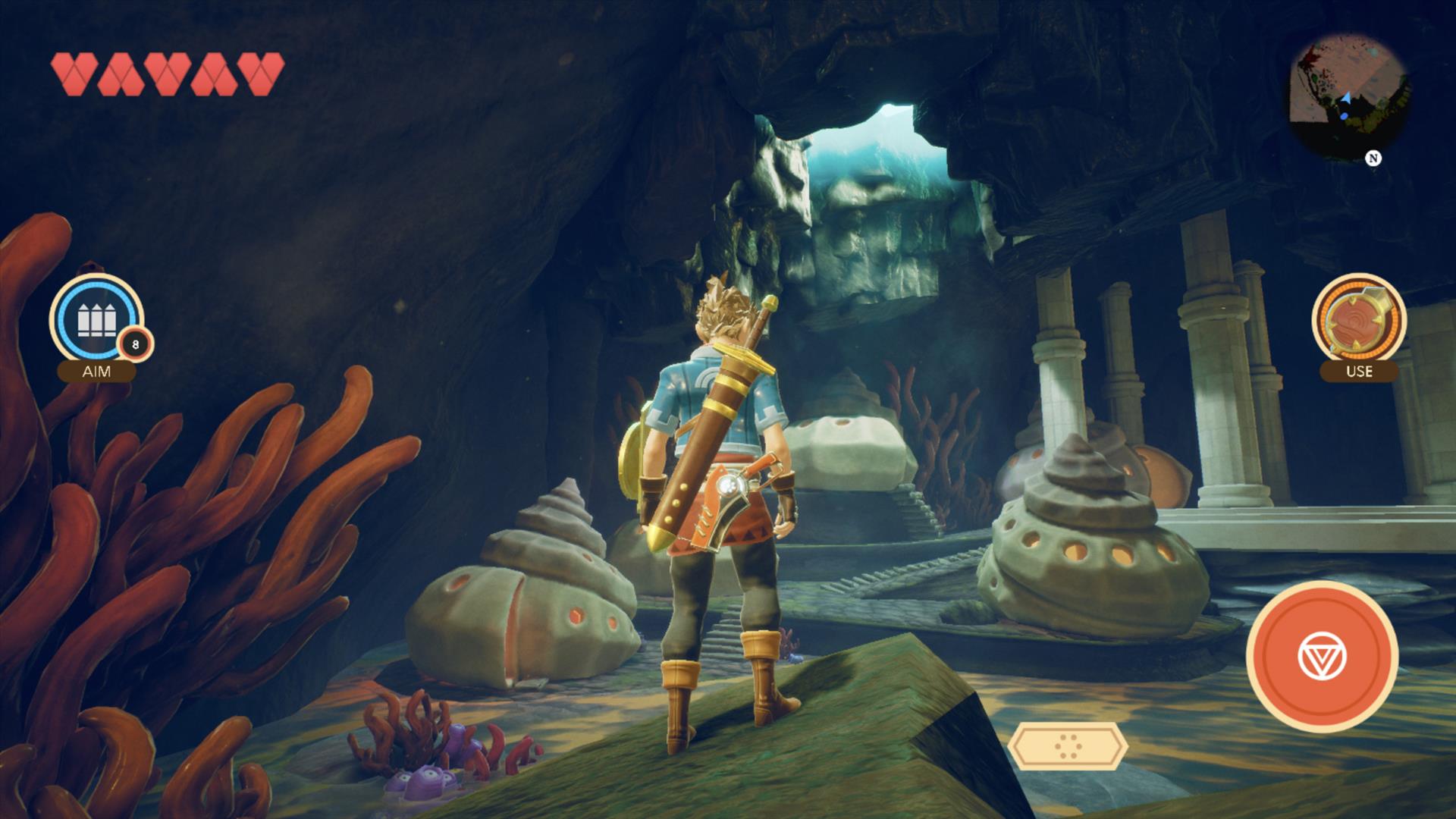 I mentioned that you can obtain several types of spells for your Caster gun such as fire and ice. While you can fire those spells at enemies they can also serve a secondary purpose. Some are obvious, such as using the fire spell on lanterns to light them up, while others are a bit more obscure and take a bit of trial and error such as using lightning to light up electrical poles to create a flowing current to activate something. Then you have one or two that you’re never told what they do and will either leave you stumped or seeking out a walkthrough. I’m not ashamed to admit I did this within the first couple of hours as I had no idea you could use the ice spell to create a platform of ice you can stand and ride on, though you have no control over how it moves.

Since swimming quickly depletes your stamina, and trying to swim without any results in death, I was stuck for quite a while at a large body of water that I had no idea how to cross because the game never explains the secondary functions of the Caster spells. That’s not really puzzle solving as much as it is not explaining a function of the game required to proceed. You also have charges for each spell and you can pick up charges by chopping down grass or pots see throughout the world, so if a spell is required and you have no charges, just mow the grass a bit and you’ll soon get one. 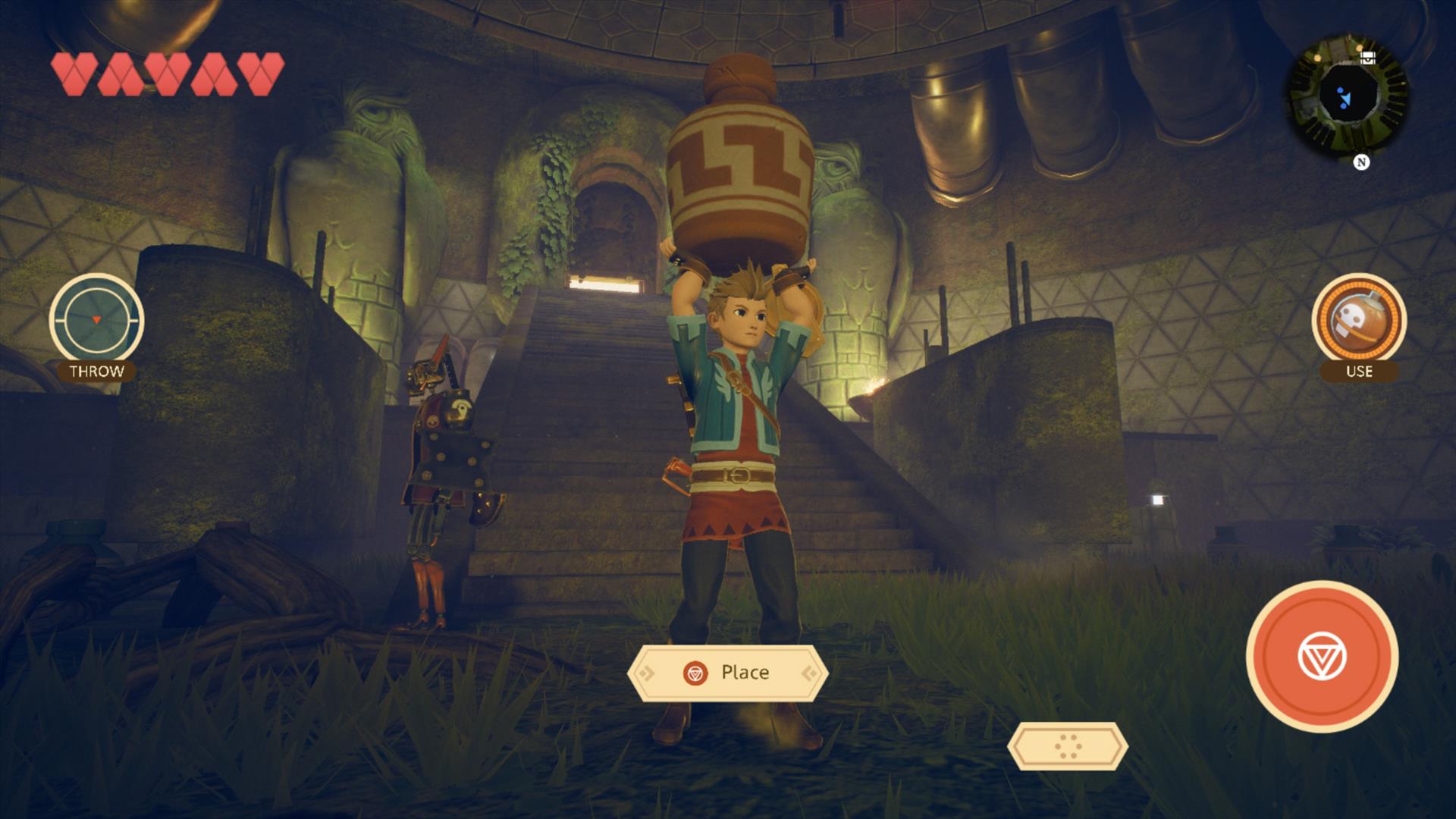 While combat can be a bit tedious, and stumbling upon a couple of the game’s mechanics is typically done by accident, the puzzles themselves are interesting and were my favorite part of the game by far. The early puzzles are nothing special, basically having someone stand on one switch while you hit another, or having Trin throw her weapon to hit a lever. The later ones, though, will have you scratching your head and thinking a bit outside the box.

For example, in the dungeon for the first Sacred Emblem, you have three switches which raise barriers blocking access to lightning rods (for lack of a better term), but if you (as in the hero himself) stand on one of them, you can’t see the rod to start the lightning chain. It’s hard to explain in context and I won’t spoil the solution here. But after looking up the solution because I was stumped for a bit, I was impressed at what it was and didn’t expect to be able to do what was needed. While the combat may frustrate me a bit, the puzzles are the exact opposite.

I have mixed feelings with Oceanhorn 2: Knights of the Lost Realm. The early going is tedious as combat can be a bit of a chore against even the weaker enemies. Once you get a couple of hours in, though, the game does get better in some cases. The combat can still be rough, especially once you get to the boss fight in the first Sacred Emblem dungeon. But by then you have several spells at your disposal, including a healing spell that heals one full unit of health for each charge, along with Trin and Gen who you can have attack enemies while you just sit back and reap the rewards. Sure that will take longer, but if Trin or Gen run out of health they’ll just be knocked out for a few moments. It’s not a huge loss. Even if you die, your last checkpoint probably wasn’t too far back from your current location.

Overall Oceanhorn 2: Knights of the Lost Realm is enjoyable, but it may take some time to get into. Once you get the hang of combat and how your spells and items work, the flow of the game will start to pick up. Having Trin and Gen to help you out does take out some of the tedium of combat and puzzle solving, though there are still a lot of head scratching moments for both good and bad reasons. While looking and feeling like a Legend of Zelda game, if you compare Oceanhorn 2 to one you’ll probably be a bit disappointed as it’s not as good as the Legend of Zelda games. On its own, however, Oceanhorn 2 is a good game, once you get past the first couple of hours and fully understand how the game works.

Oceanhorn 2: Knights of the Lost Realm looks and feels like a Legend of Zelda game, which is good. But comparing it to the Zelda series might lead to disappointment whereas, on its own, it's mostly enjoyable. If you're looking for a Zelda-like experience, Oceanhorn 2 should help fulfill that void for a while, as long as you give it some time to do so.