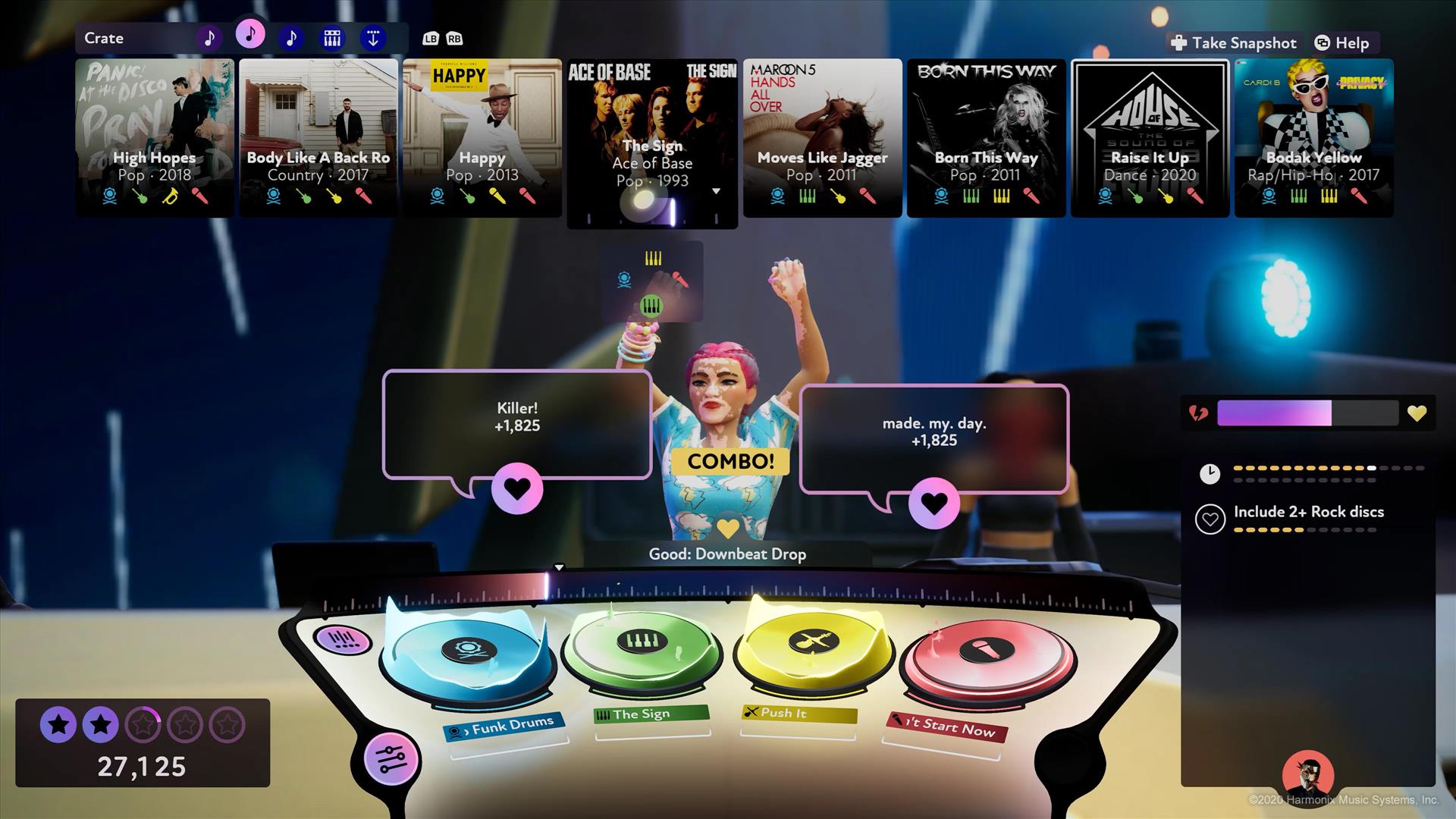 It seems like such a long time ago, but it was only a decade or so ago that Harmonix let everyone feel like rock stars in their living room. We all know at least one other person that had plastic guitars or drum sets in their living rooms. We all got together to rock out to our favorite songs and hear the crowd cheering for us as the annoying sounds of plastic clattering filled the room. Well, those days are long gone and those plastic instruments are all gathering dust in closets or second hand stores. But that was then and this is now. Harmonix is back once again to show that they are the kings of music rhythm games in the videogame industry with the release of Fuser. 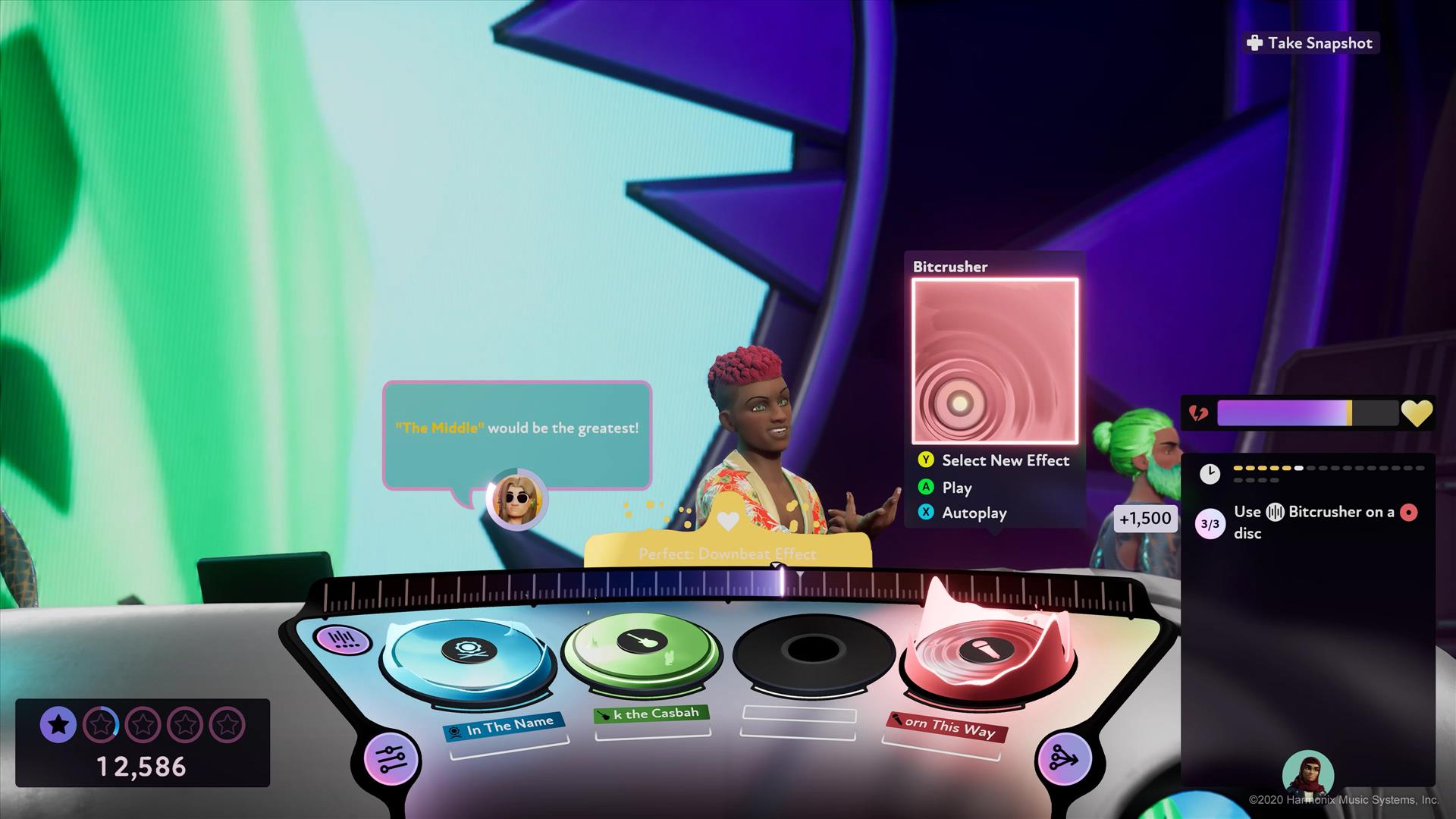 Much like Rock Band made you feel like a rock star, Fuser makes you feel like you are a DJ - completely in control of the music at a giant music festival. There are no peripherals this time around, as everything can be done right on your controller. Fuser becomes a full immersive experience as soon as you step foot on the stage for the first time. As I stood high above the festival with thousands and thousands of concert goers below me, I dropped my first track and instantly started bobbing my head to the music. So much so that I got so lost in creating all these mixes that I wasn't paying attention to what I was supposed to be doing. Oops. In career mode, each gig has you completing a number of objectives as the show goes on. At first all of the tasks are incredibly simple to do. If you are asked to drop vocals, drums, backing tracks you just have to hit the button for each instrument and drag it onto the turn tables and listen as the game instantly changes up your mix.

Probably the impressive part of Fuser is how the game will instantly, no pun intended, fuse together each part of the music to create something new. As the set lists go on though, you will be asked to perform many more tasks, which can become overwhelming as you get deep into the career mode. The good thing is that career mode acts as an extended tutorial, so it slowly eases you into all of the tools available to you. 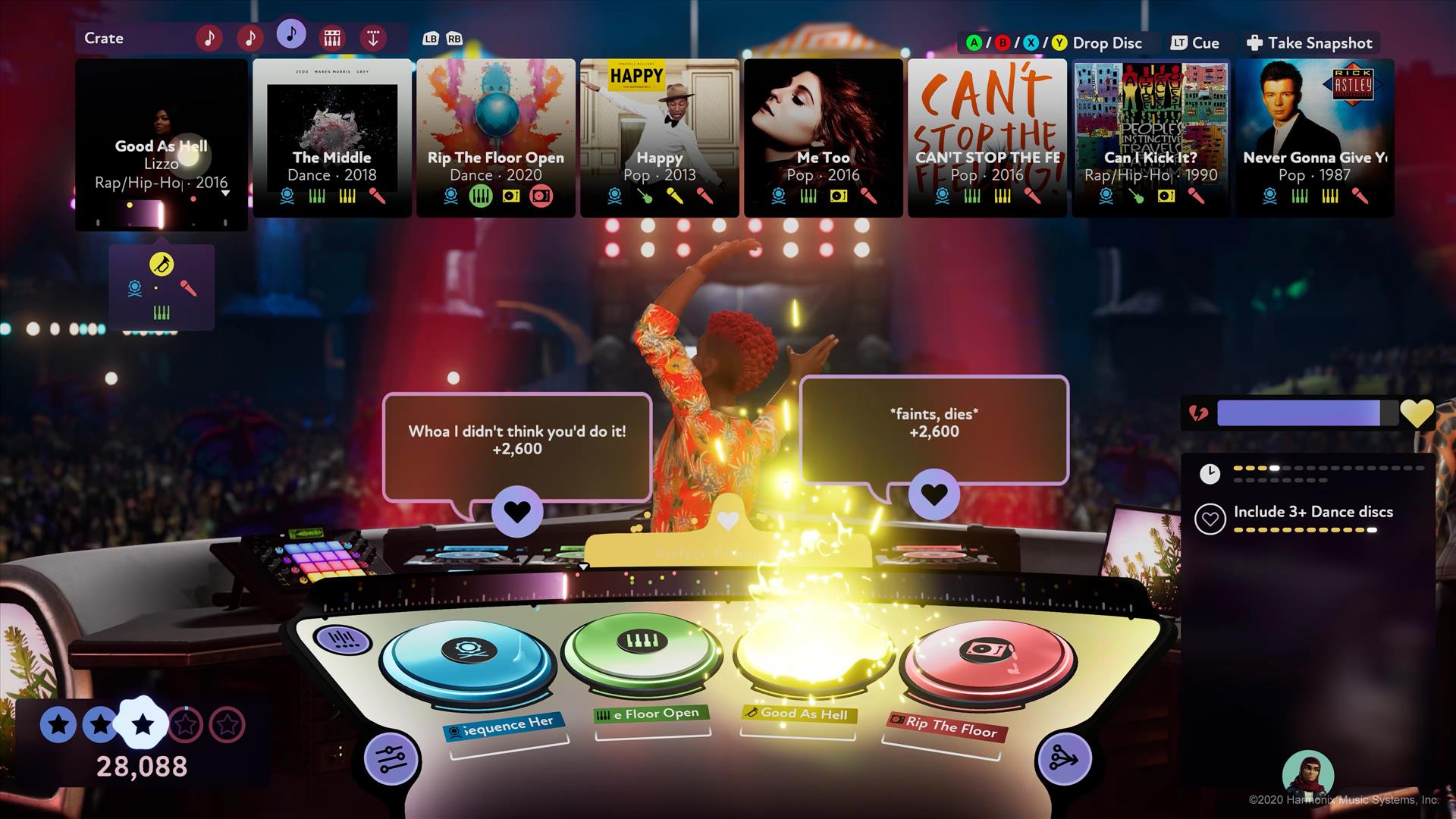 Fuser provides a wide variety of music from tons of different genres including Rock, Pop, Dance, Hip Hop and more from a very eclectic variety of artists from Salt n Pepa, Lizzo, Rage Against the Machine, Shania Twain, Basement Jaxx, and many more. You can select a number of these tracks and put them together in "crates" which basically act as a way to easily save playlists to bring with you into shows. If you like the way a mix sounds you can also create a snapshot, which is a way to save it and then drop it instantly into your set during other shows.

While Fuser is absolutely a game, it's also a fully in-depth music creation tool as well, and those who can read or play music will probably get the most out of this. Personally I couldn't tell you the difference between a B sharp and an A Minor, but you have the ability to edit the music in a ton of different ways - such as changing the tempo, key, minor etc. The game also includes various sound effects and instruments that you can loop, modify and drop into your mix. So you could create a bass drum loop, a synth piano loop, give them a telephone sound effect and then drop them into the mix. The possibilities here are really endless.

Aside from Career mode, you have a couple of other game modes, including Freestyle and Battle Mode. My biggest complaint about Fuser is that I wish there were a way to play Freeplay mode but with career mode rules. Like the name would imply, Freeplay mode allows you to just go in with your crates and create any mixes you want. There are no objectives, no audience requests, no way to fail the show and it literally goes on forever. While this is obviously great for those who are more into creating music, I really wish you had the option to add objectives or at least get requests from the audience, because the career mode feels like an extended tutorial rather than something like Rock Band where you are going from small gigs to selling out stadiums.

There is also an online mode called battle mode which is tons of fun... when you actually get to play it. The problem is that either there aren't a lot of people playing or there is hardly anyone else in my ranking tier, leading to a long wait to find matches. Most of the time Fuser just keeps searching for matches before kicking me back to the mode select screen. There is also a casual mode, but as of the time of writing, I haven't been able to play a single casual game. I have tried tons of times and every time I do it just tells me it can't find a match after searching for a while. 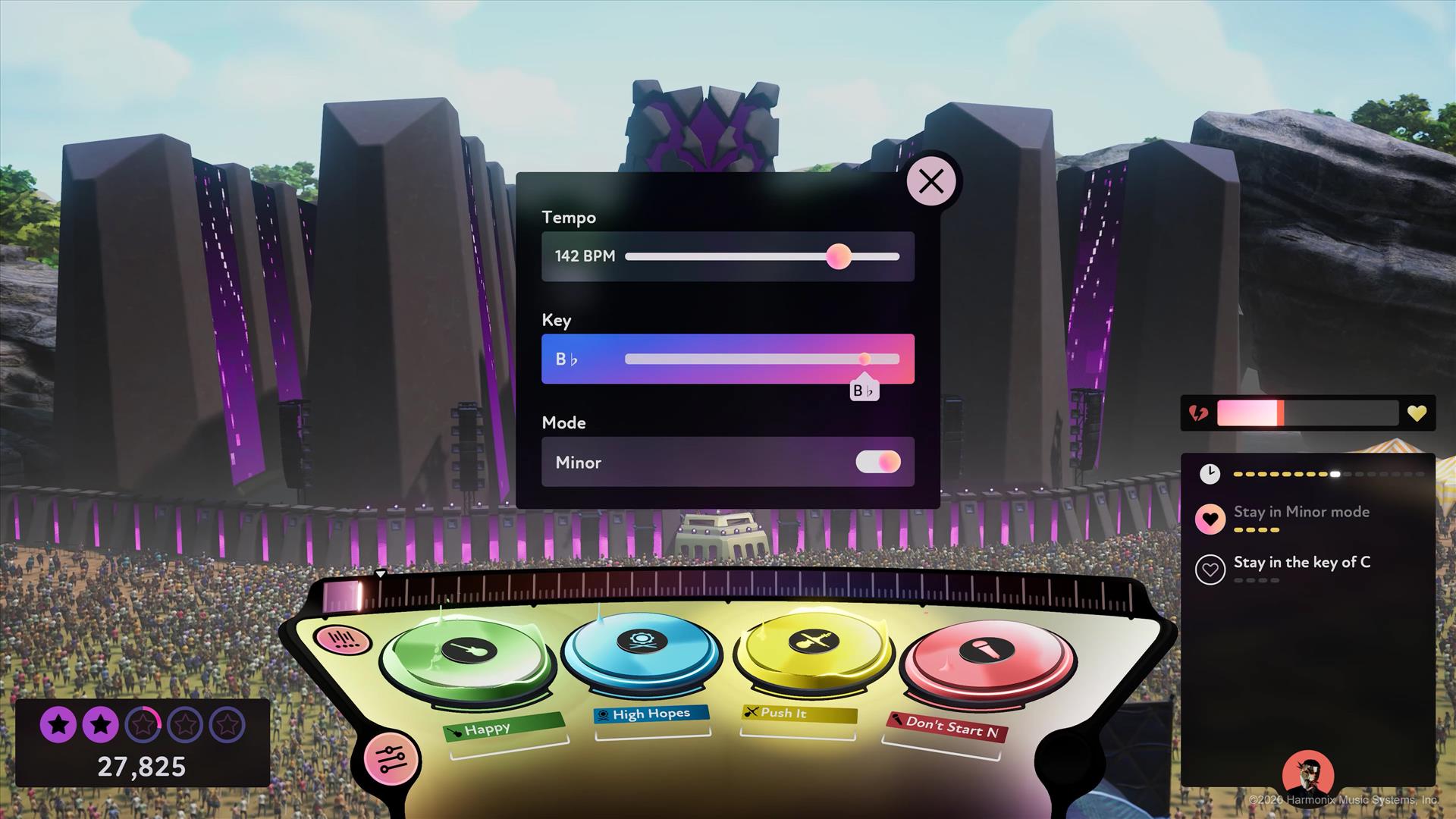 One final note about DLC; there are tons of music tracks which can be bought individually or in bundles. I am perfectly fine with this and it's really expected with a game like this. There are also costume packs for your DJs which can be purchased. All of the in game cosmetic items and songs can be unlocked via in game currency, but you can earn them rather quickly as you gain currency for leveling up your character. Having a large number of music tracks and sound effects locked from the start might turn off some players but personally I didn't feel like I had to grind to earn things. I felt like they were easy to unlock, so it made me want to work towards unlocking everything.

You can also customize your own character. The selection of clothing and accessories available at the start are decent enough that you can create a unique DJ, but there are also a lot of items locked behind career mode and weekly events. The outfits from career mode are acquired by gaining stars during a set, which is easier said than done. Getting five full stars on a set pretty much means you can't mess up at all. You have to be constantly changing tracks, keeping the crowd happiness as high as possible. Having to juggle all of this at once is quite the task and it's taken me quite a few tries to get 5 stars on the beginner sets. 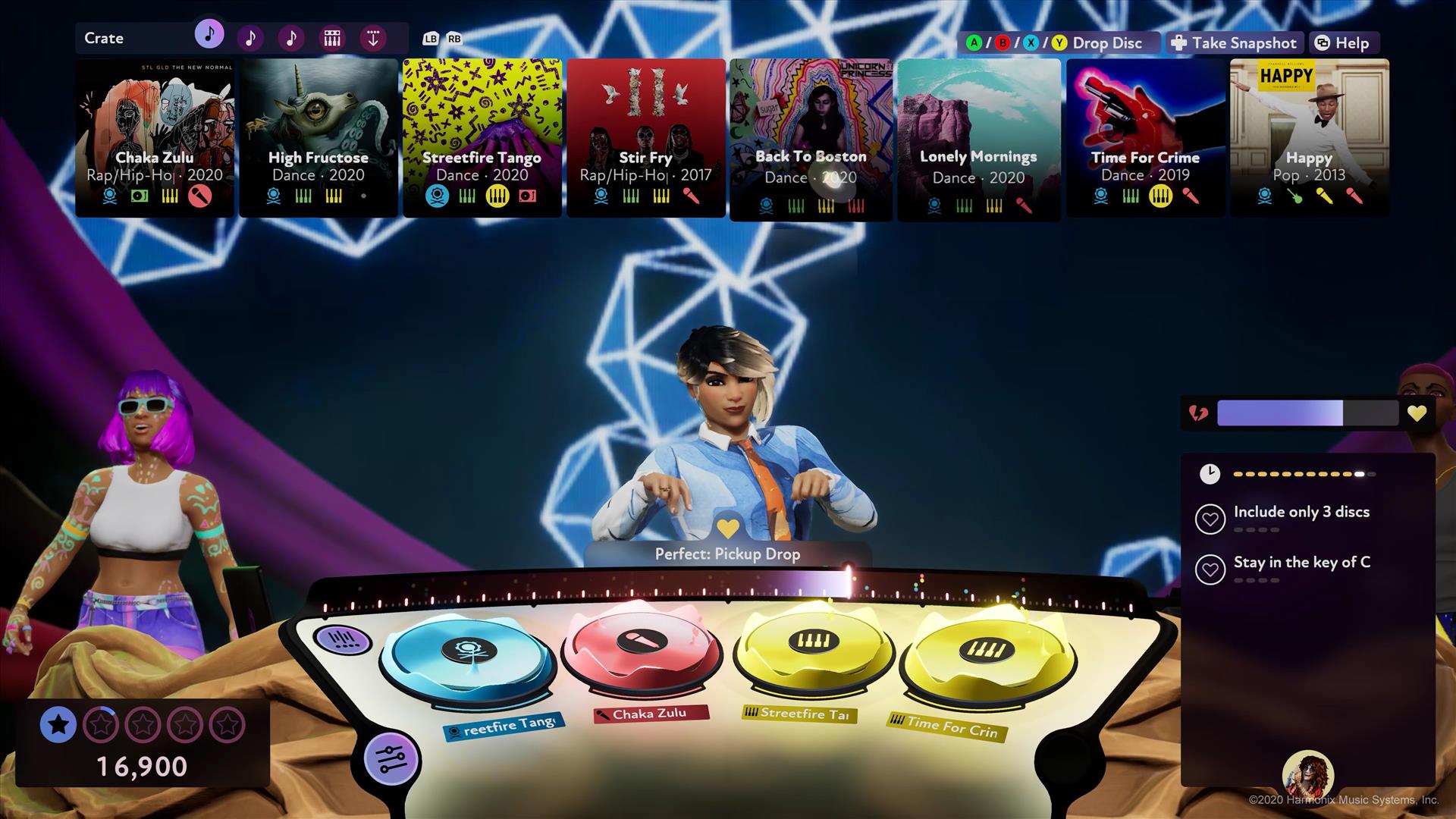 Fuser is a pretty great achievement for Harmonix. The way that all the parts of the music instantly fuse and flow together is quite impressive. With tons of music tracks and tools at your disposal, you could essentially create endless mixes that will all sound different. Its only a shame that it seems like not many people are playing, as the online versus mode is a lot of fun; I haven't been able to play it battle mode as much as I want. That said, if you like the idea of being a DJ on stage at a giant music festival - much like you were in a Rock Band playing in front of a stadium - absolutely give Fuser a try.

Harmonix shows once again why they are very good at what they do - making fun rhythm games.  Fuser is a fantastic music creation tool that is a ton of fun to play. Online battle modes are fun, when you can find people to play with. Fuser is something I will be playing for quite some time, if only to try and get five stars for all the campaign missions.