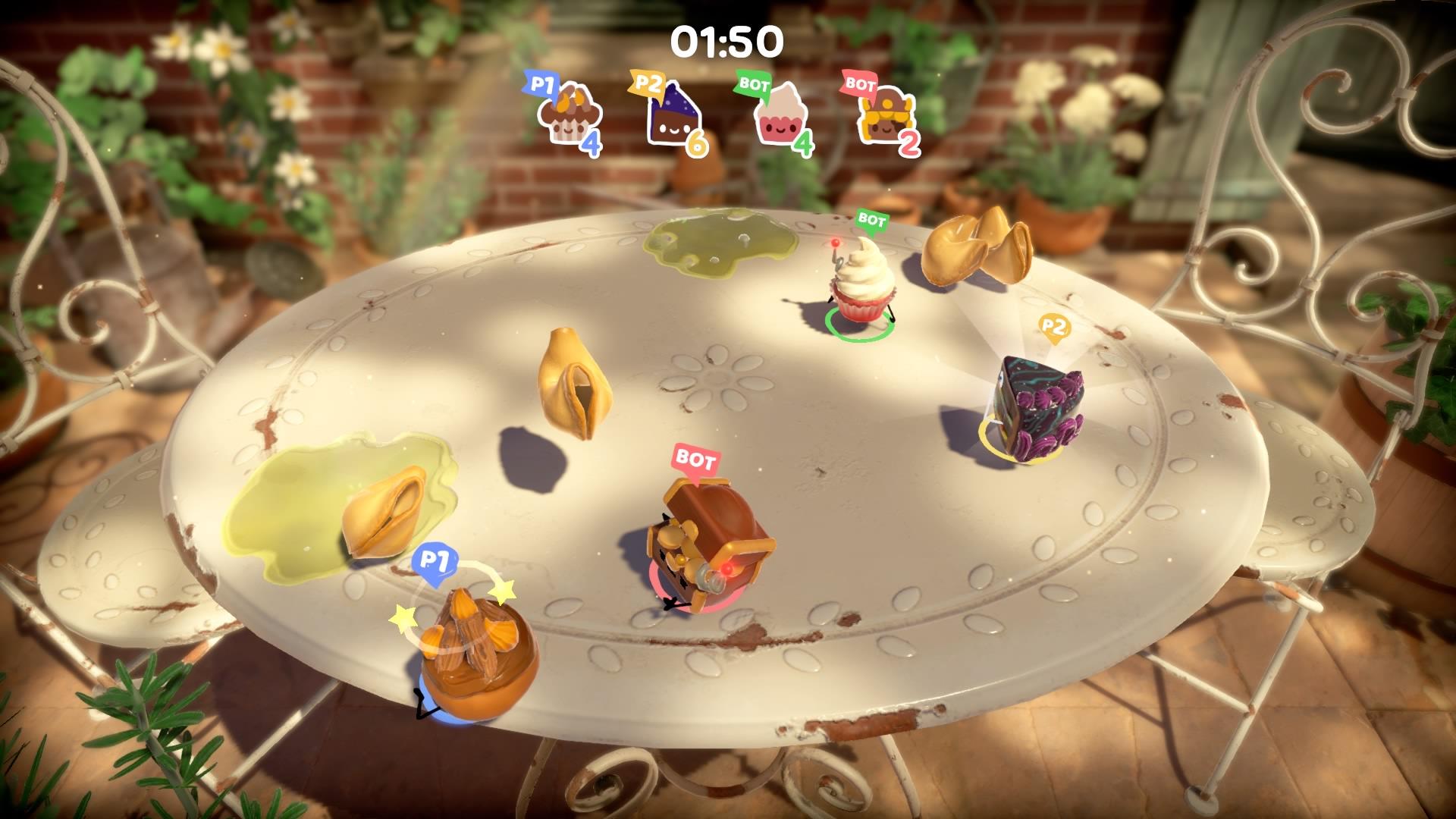 “Family friendly” is not a dirty term in my home. You see, I have a family. A rather large one, in fact, consisting of six people ranging in age from four to 48. So, on the rare occasions that we find some magical piece of media that entertains the 20-year-old as well as the four-year-old, well, we know we have found a keeper. Pixar movies usually do the trick. Certain competition shows, the occasional Netflix series, last year's animated Spider-Man film. But it is a rare video game that will make every member of my family sit up and take notice.

Cake Bash, the new pastry-centric party game from UK developer High Tea Frog is just such a creature. It is a charming party game, a ray of sunny good cheer (and sometimes bitter battle) in a world darkened by closed schools and cancelled extracurricular activities. It arrives not a moment too soon, as anything that can distract my prisoner children is beyond welcome right now. 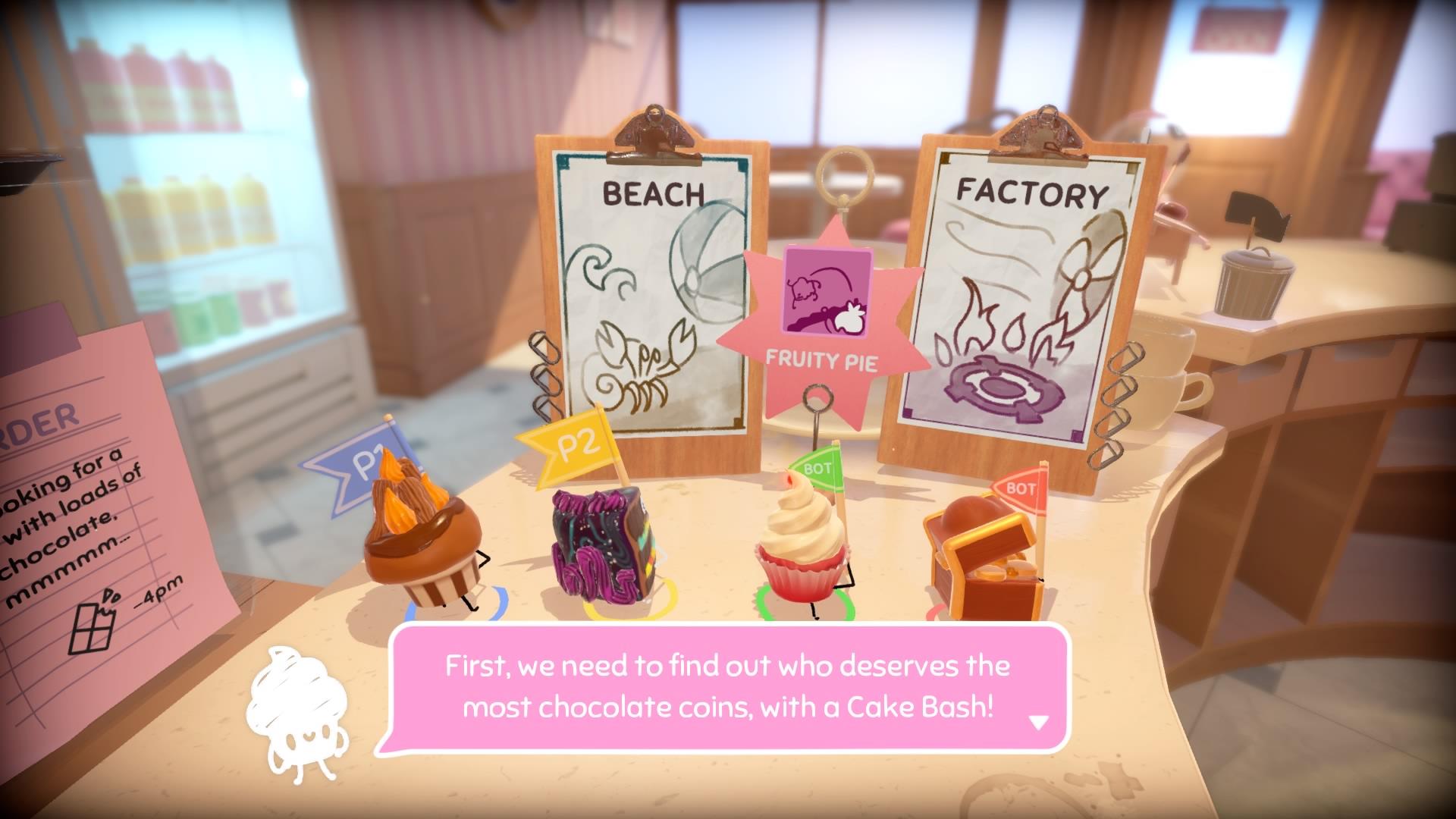 A few days ago, the seven-year-old wandered in while I was taking a look at a prerelease copy of Cake Bash.

“It’s a game about cake,” I said, watching her eyes light up. “You pick a piece of cake, or a donut, and you fight in little competitions against other pastries.”

It was almost as though I had just said, “It’s a pot of gold. You can keep it, and use it to buy a magical pink pony.” In under 24 hours, Cake Bash became the new central focus of my household. In between Zoom calls for school—Cake Bash. Instead of morning cartoons—Cake Bash. In the evenings before the little ones’ bedtime, when we usually watch whatever awful kid show we are working our way through (though, real talk, Julie and the Phantoms was my jam)—Cake Bash. 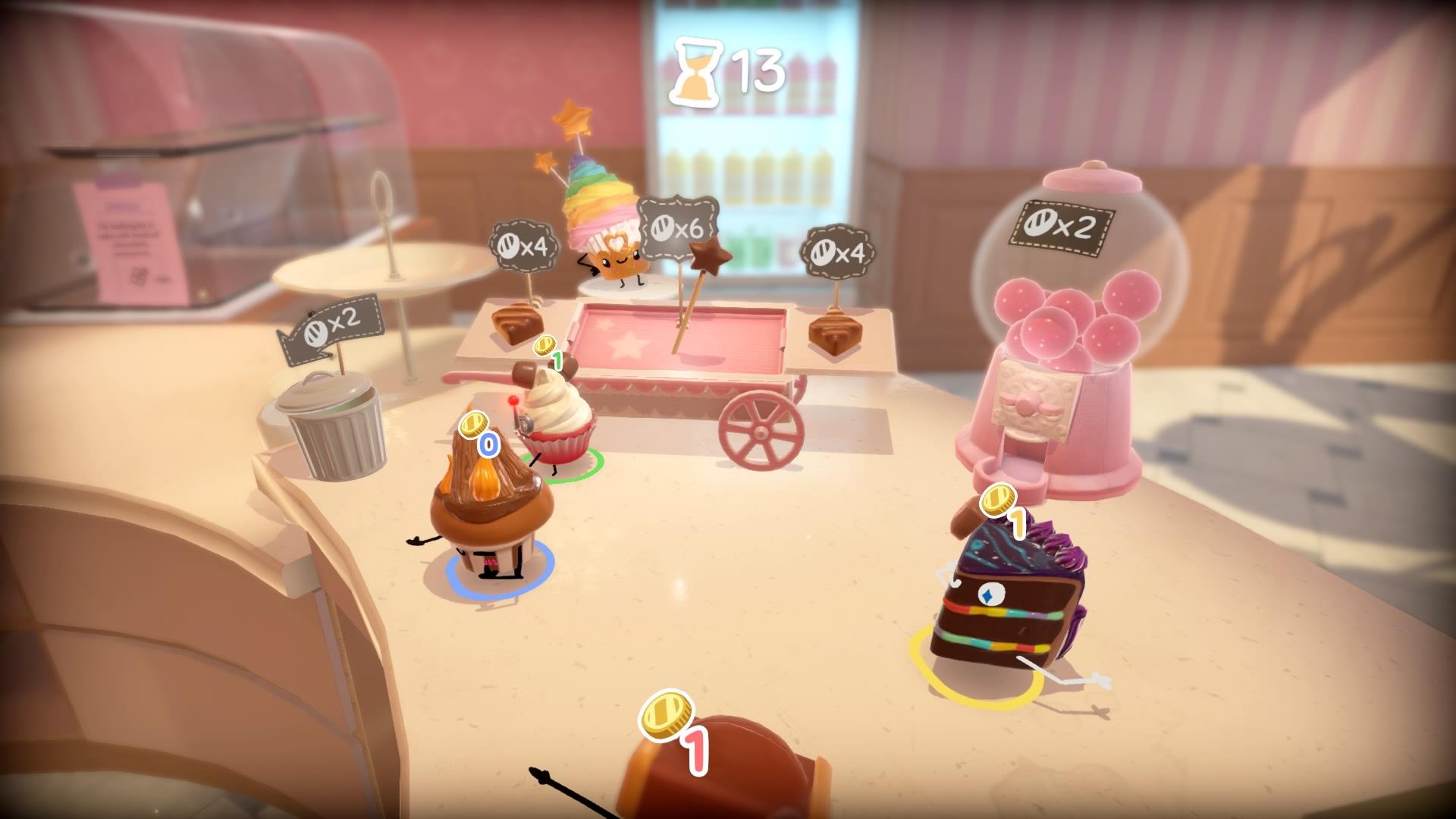 The entire family gets in on the action, with possession of controllers being bitterly argued over. Even my wife, a perennial non-gamer, has been engaging in daily bouts of marshmallow roasting and sprinkle battling. Cake Bash is indeed a keeper. With my older sons away at college, the easy-to-use online feature allows everyone to play together, which is a great way for my kids to bridge the gap between them, both in age and distance.

Cake Bash is simple enough for everyone to enjoy, even those that do not play games regularly. Most of its activities use just one or two buttons, with the controls clearly spelled out before each round. But with its mind-bendingly cute characters and regularly shifting gameplay, this game stands out from other mini-game collections.

Cake Bash is a sterling example of clean game design. Everything in this game is polished to a sheen. Fonts are large and menus are easy to navigate. The process for selecting a character is clear and easy. Voting for activities or which map will be next is as easy as running your little cake up to a picture of your selection and clicking a button, then punching your neighbor until the round begins. There is nothing in this game that a non-gamer or a child could not comprehend—which is far more difficult to achieve than one might imagine. And that overriding adherence to ease of use doesn’t mean that Cake Bash is too simple for more experienced players.

The primary game mode is called “Get Tasty.” A game of Get Tasty can take anywhere from 15 to 20 minutes—a modest time commitment that my family can easily talk me into making. Get Tasty consists of three different activity types: minigames, “Bash” activities, and purchase rounds. 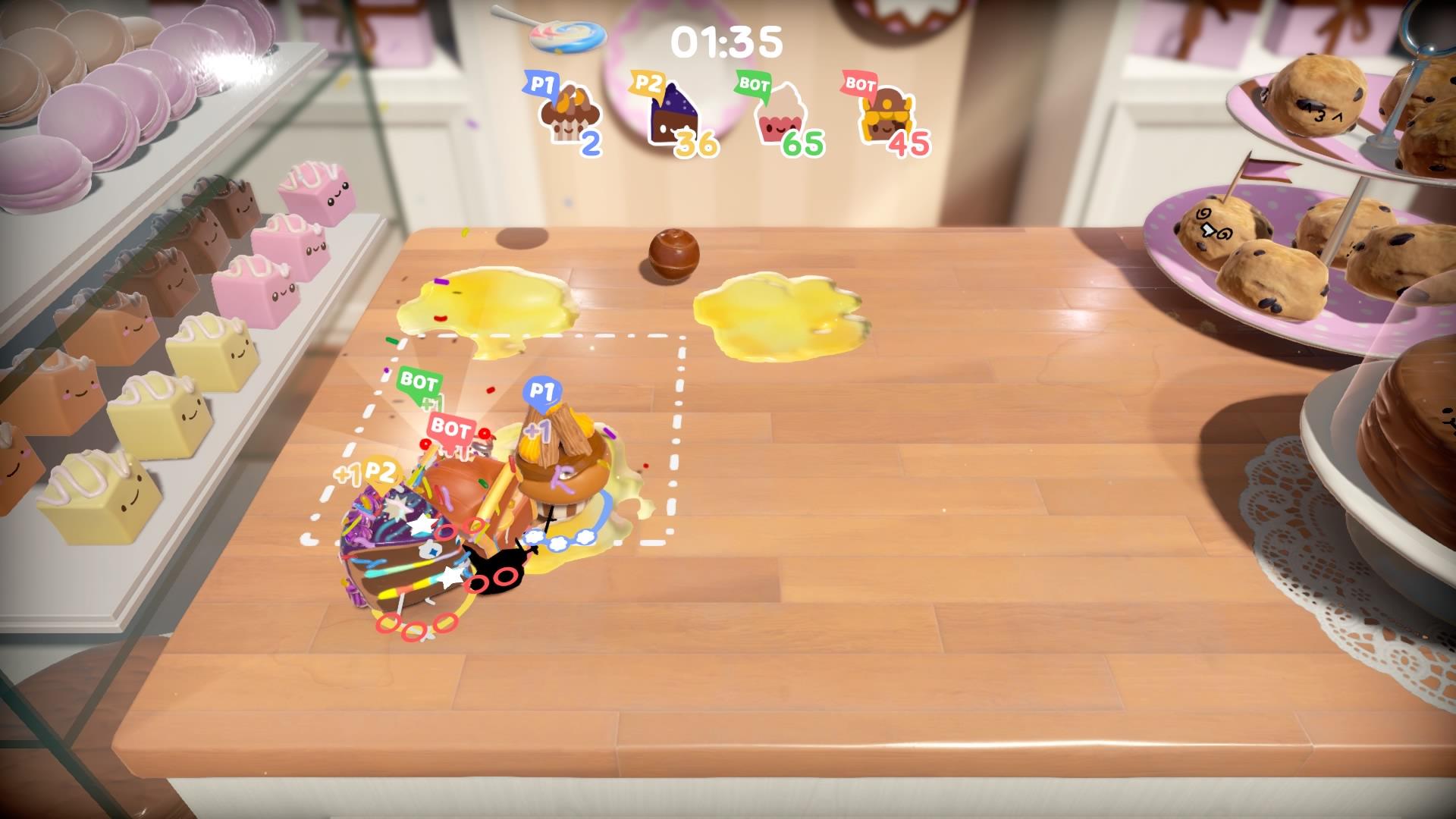 The minigames in Cake Bash are kinder, gentler activities. Players see how many marshmallows they can roast in 90 seconds without burning them. A game called Fork Knife has cakes running around a larger cake while utensils dive bomb them from above; the last cake standing wins. In Neapolitan, players dash about trying to catch scoops of ice cream in a sugar cone. These minigames are fast, fun, and can provoke seriously loud yelling.

Bash activities are more aggressive. Players run around a small, screen-sized map trying to accomplish some goal before/better than their competition. Sometimes players are attempting to gather the most candies in their frosting, slapping away other players and punching them to dislodge their sweet treasures. Sometimes everyone is running around attempting to throw fruit into a pie, while being hounded by an absolutely evil-minded pigeon. Another game has players competing to smash the most fortune cookies, which fall randomly from the sky. Winning these competitions often requires a single-minded focus—and the judicious willingness to stay far away from other players, who often resort to pastry violence and wanton carnage when they realize that they won’t be winning a round. 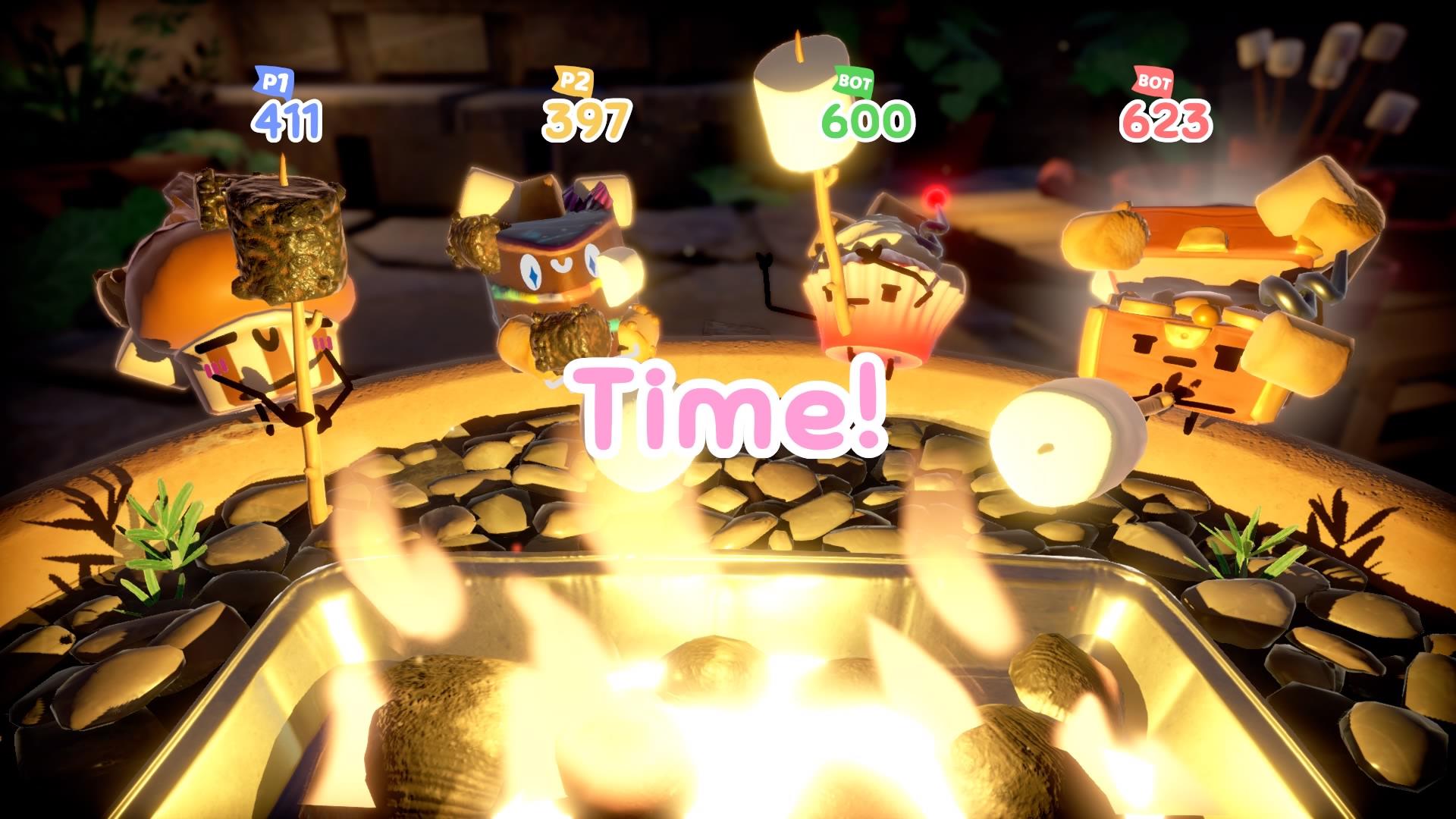 All of this pays off in Purchase rounds, where you buy goodies to lock in your score. Depending on your placing in activities, you are awarded a certain number of coins. In purchase rounds, you use those coins to buy decorations for your cake, each of which is worth a certain number of points. If you buy three of the same type of goodie for your cake, they combine into one super-goodie, which awards bonus points. It is through this mechanic that careful players can pull ahead of others, sometimes winning the overall game without performing particularly well in specific activities.

This rotation of activities happens in a loop, which in my family, can go on for entire afternoons. Play a minigame, play a bash game, buy some goodies, repeat. Each time you run through Get Tasty, something new unlocks, keeping the goings-on fresh for quite a while. Then the kids demand to go again. 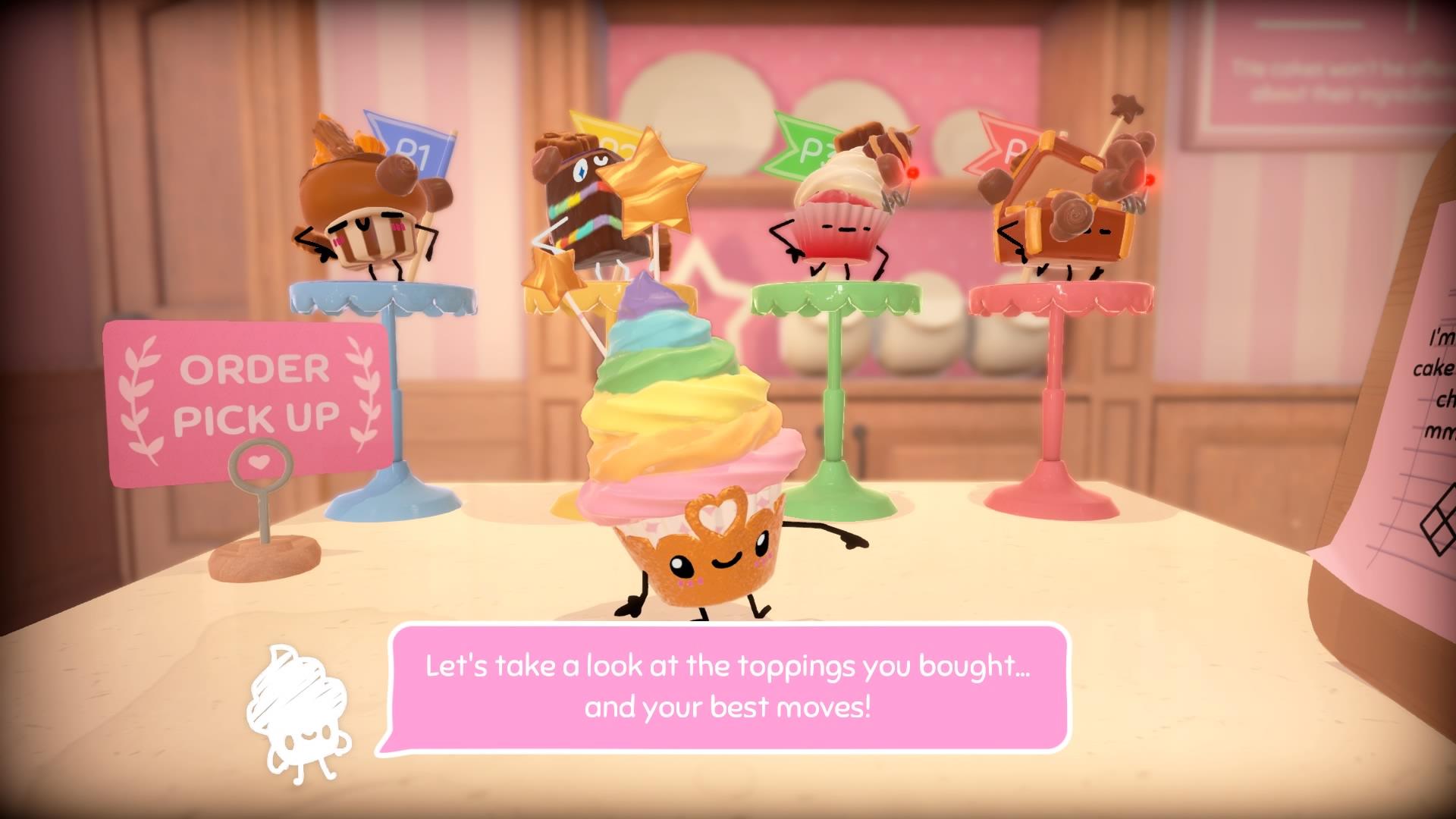 My only real complaint about Cake Bash is that I wish there were more of it. Activities, maps, and new character skins unlock at a steady pace as you play, but after about a week my family has seen just about everything there is to see. To be fair, we are talking about an indie title produced by two people, with an amazing amount of polish, retailing for a very fair price—so, wishing that there were more of it might sound a bit entitled. And of course, I’ve got a seven-year-old rampaging in single player through round after round of Cake Bash, so we may have unlocked things a little quicker than most. But still, after you have unlocked every mode and map, older or more experienced players will see little reason to continue on their own.

But the unlockables are not really the point of Cake Bash, are they? The point of games like this is to share a little time with family and friends, having a fun focal point to chat about and laugh over. And for that purpose, Cake Bash is just about perfect. If we were currently seeing any of our extended family, I would be perfectly comfortable putting my 73-year-old mother in front of Cake Bash and let the kids beat up on her a little bit. This is just the sort of game that anyone will gravitate to and want to try.

As the pandemic wears on, my family is increasingly drawn to simple pleasures. We are watching more comedies than dramas. I’ve been reading Star Trek novels instead of my usual diet of horror and suspense. My gaming time has been following similar patterns. I love my mature games, but lately when I’m playing darker games for work, I’ve been isolating from my family more than usual, as no one has much of an appetite right now for spraying blood and decapitations. There’s enough awful garbage happening in the world, and sometimes allowing that stuff into our entertainment feels like an assault on the psyche.

So Cake Bash has arrived at a perfectly fortuitous moment. This game is all pastels and rainbows, bouncy music and good cheer. Winning is fun, but losing is fun too. There is nothing wrong with charm, and it is perfectly fine to turn the sardonic irony off for a little while and just enjoy some more innocent fun. And if it can keep the kids happy for a couple of hours, all the better.

Cake Bash is an extremely polished four-player collection of minigames and competitions that is perfect for families as well as more experience players. This is the sort of game that is meticulously designed so that anyone can pick up a controller and enjoy it. Though the amount of content in the game feels light, the amount of entertainment to be gained from this package far outweighs the asking price.