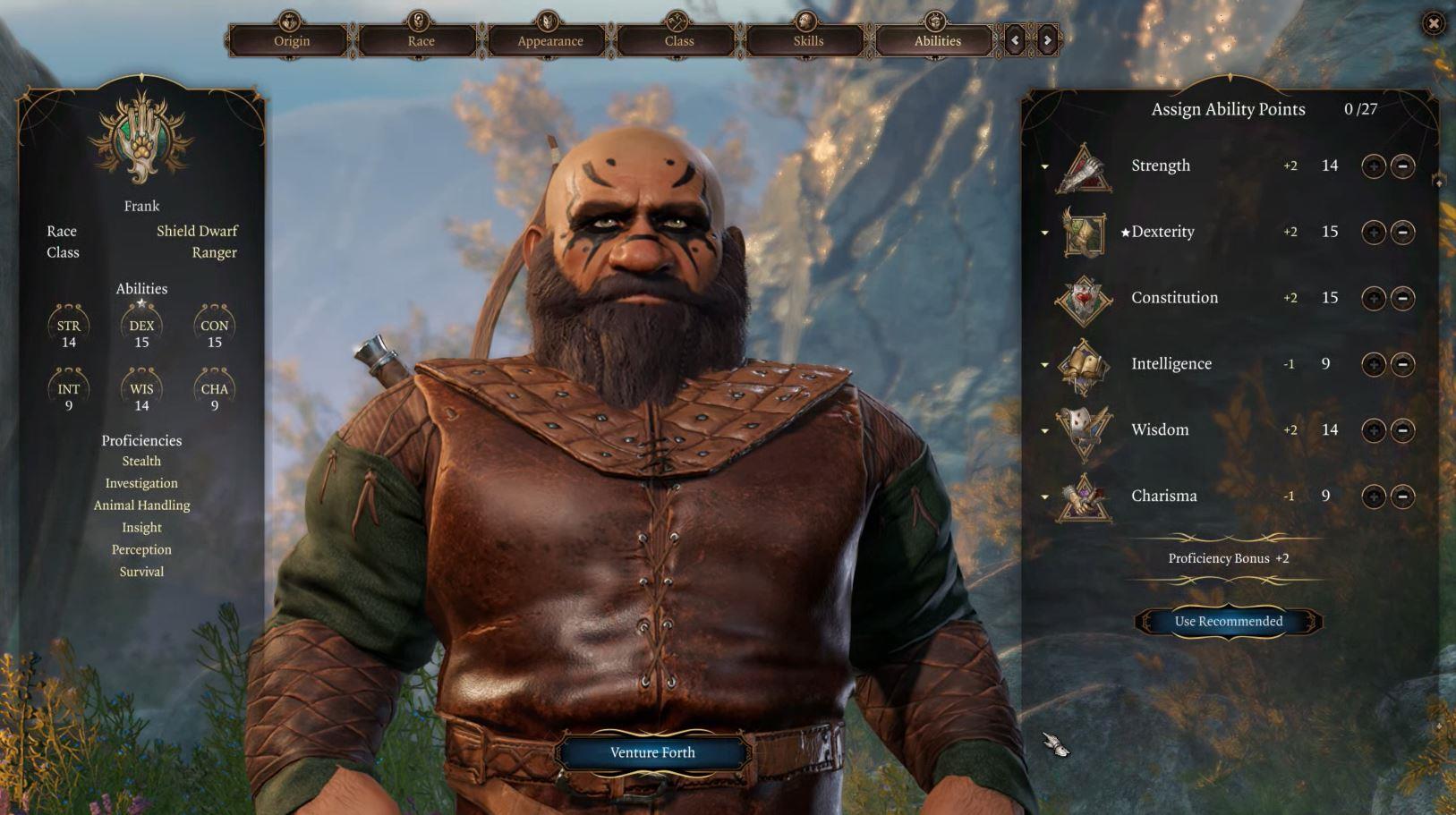 Gaming Nexus is very excited for the arrival of Larian Studios’ Baldur’s Gate III. While many of the Gaming Nexus staff have never met in real life, that doesn’t stop us from interacting socially all day, every day. Tucked among our other (very active) Slack channels is an innocuous chat room simply labeled “dnd.” It is in this channel that GN Owner John Yan, Copy Editor Randy Kalista, and I go spelunking into darkened caves, battling cultists and bickering among ourselves in a tabletop D&D campaign. Well, a Slack tabletop campaign.

Our Gaming Nexus Dungeons & Dragons campaign has been running for a little over a year now. We originally rolled our characters in the Dark Sun world, where we had a short but memorable adventure before DM Randy unceremoniously dropped a cosmic event on our heads and transported our little band of adventurers to the hills outside of Baldur’s Gate. Randy is a fairly liberal DM, and he allowed (read: forced) our Dark Sun characters to come stomping across dimensions like Lovecraftian superheroes. This was how John’s nunchuk-wielding Thri-Kreen and my berserker hill dwarf ranger came to be soldiers in Baldur’s Gate’s guard force. Needless to say, we do not fit in very well.

My ranger Frank is a fish out of water in the city of Baldur’s Gate. In a town full of scoundrels, Frank is a hardened man with a strict moral compass. The problem is that the ethical code guiding Frank is wildly out of sync with the rest of the world’s. Frank (and his dearly departed wife, Mork) made their living running caravans of escaped slaves through the deserts of Dark Sun to relative safety. Attuned to a life in a different, much more cutthroat realm, Frank tends to act first and ask questions later. Though he can always explain his reasoning to his bewildered companions after the fact, he tends to shock everyone he meets with his willingness to cheerfully indulge in wanton violence.

Using his high perception and intuition, Frank can often perceive the intentions of others, and he doesn’t hesitate to attack when he decides he and his friends are in danger, even when they are woefully outnumbered. Frank believes in taking a straight line from A to B, and when a situation calls for subtlety, Frank resorts to screaming and blades. He always telegraphs his intentions, explaining precisely how he will dismember his enemies (often in verse), and woe be it to those that don’t take him seriously. Opting for a shock and awe approach, Frank hacks the heads from his strongest defeated foe, which he carries in a bucket hanging from his belt. The head remains in the bucket (which has mysterious magical properties that give Frank occasional stat bonuses) until Frank claims a better, more powerful head.

Frank is a force of nature, a whirling cyclone of inappropriate jokes, bawdy songs, and flashing steel. Frank will burn the whole world down before backing away from a fight, and will sing an off-color song with glee as he does so. Of all the characters I have created over the years, Frank is by far my favorite to play. He is witty, wild, and absolutely unpredictable, using a logic all his own to make his way through the world, simply assuming that everyone else is on the same page.

When I got early access to Baldur’s Gate III on Stadia, I thought that it might be fun to try to recreate Frank using the game’s character creator. I am going to attempt to play Baldur’s Gate III in character as Frank, though I imagine that Baldur’s Gate III and I are going to have to compromise on certain issues. I doubt that the devs at Larian Studios were prepared for a character like Frank, and I’m equally certain that they won’t be providing him with a magical bucket to store head trophies.

Nonetheless, I can wander the world of Baldur’s Gate as Frank, making decisions using his off-kilter logic and facing down challenges with his unique blend of good cheer and carnage. I got started this morning, duplicating Frank as best I could in Baldur’s Gate III’s already-acclaimed character creator. 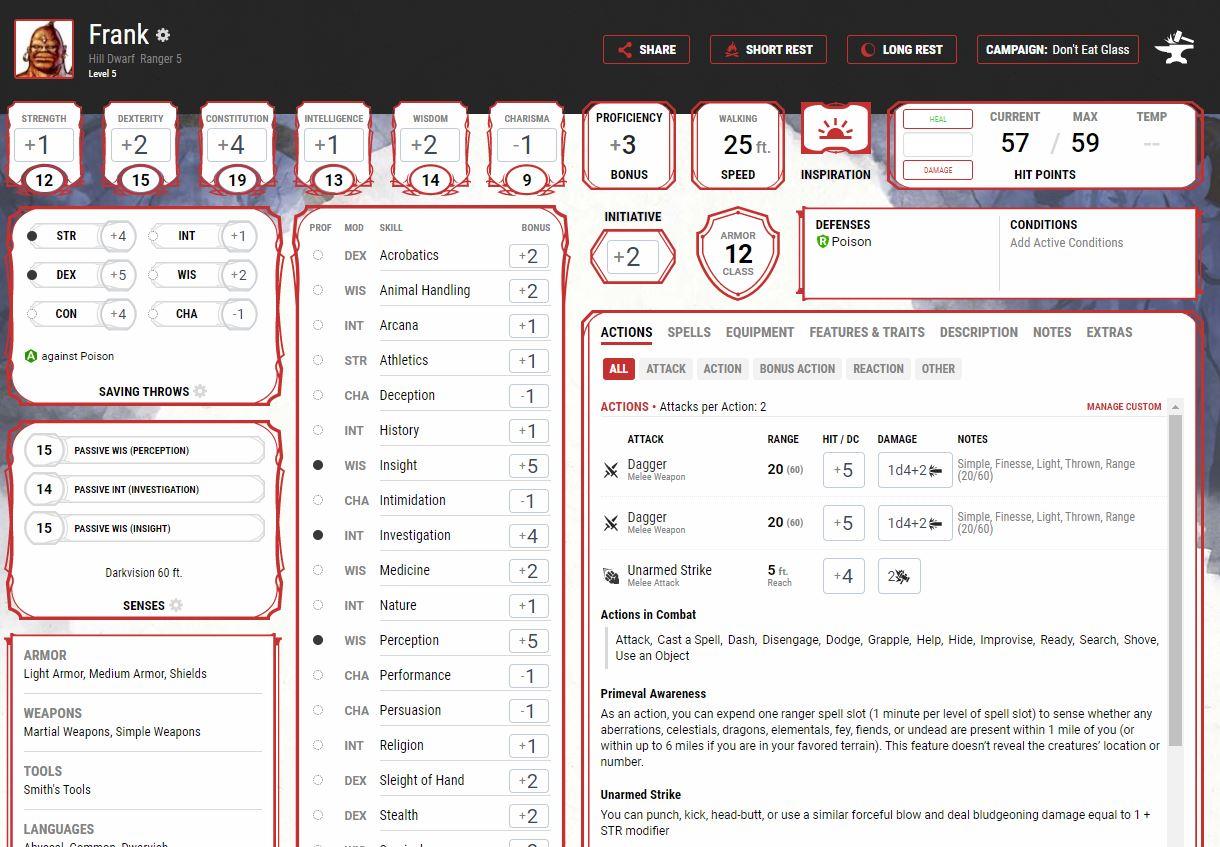 Bringing up Frank’s character sheet in DnD Beyond as a reference, I refreshed myself on the ins and outs of his character. I watched the opening sequence of Baldur’s Gate III (fantastic and gross), then was placed into the character creator. Tav, the High Elf Cleric supplied by Larian as a default character, was decidedly un-Frank-like. I was going to have to dig in deep and alter just about everything to wrangle Frank into existence. 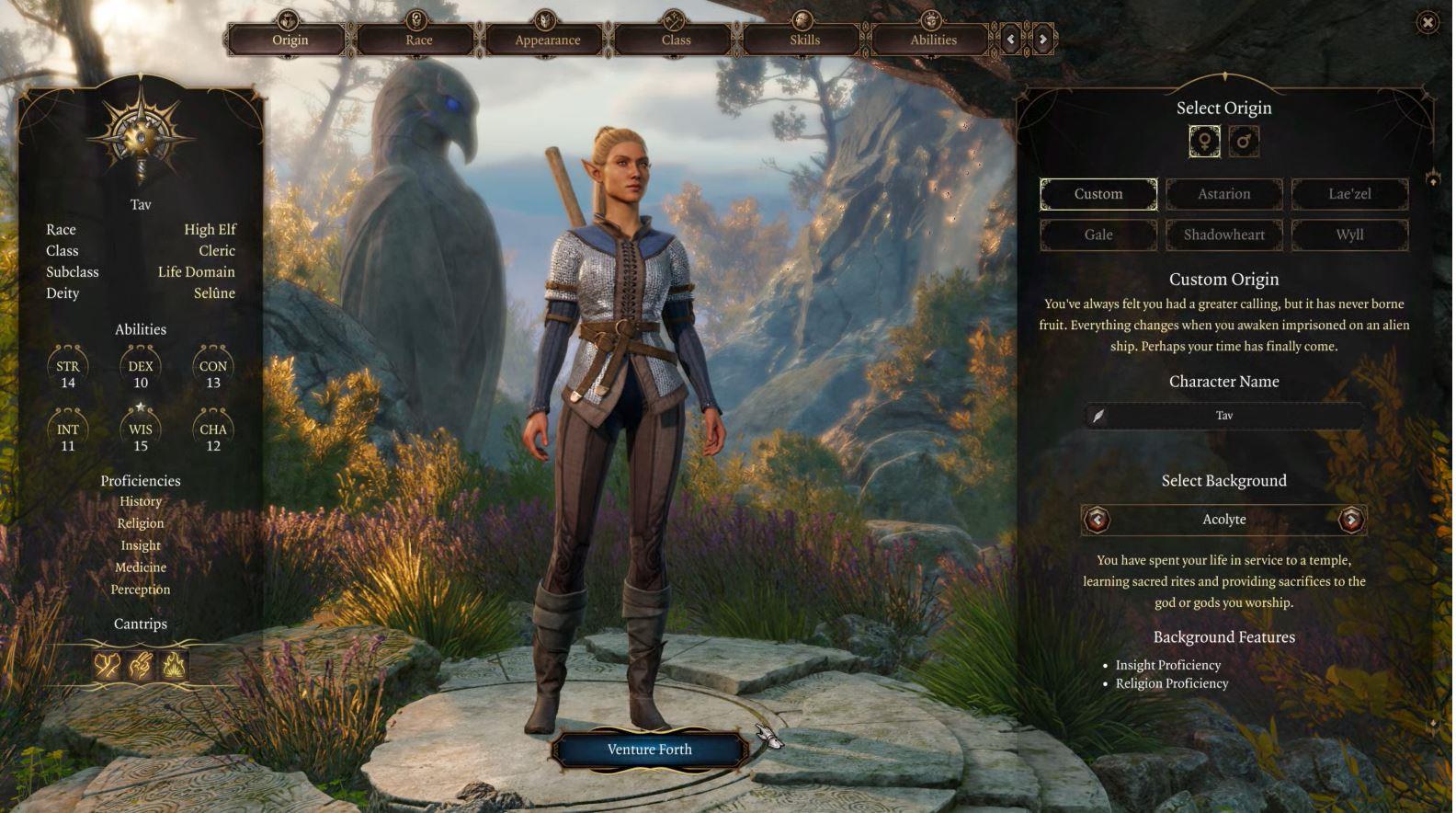 The first thing I did was change the gender. I usually create female character in RPGs—modeled after my wife—but this time I was happy to diverge from my typical pattern. I named Frank, then had to navigate the choices for his background. Although Frank is a bit of a lunatic, his heart is in the right place. He has a history of helping escaped slaves, and he would never harm anyone that didn’t deserve it. With Frank’s ranger skills leaning towards Survival and Animal Handling, I decided that Folk Hero was the best fit out of the 10 or so options provided. 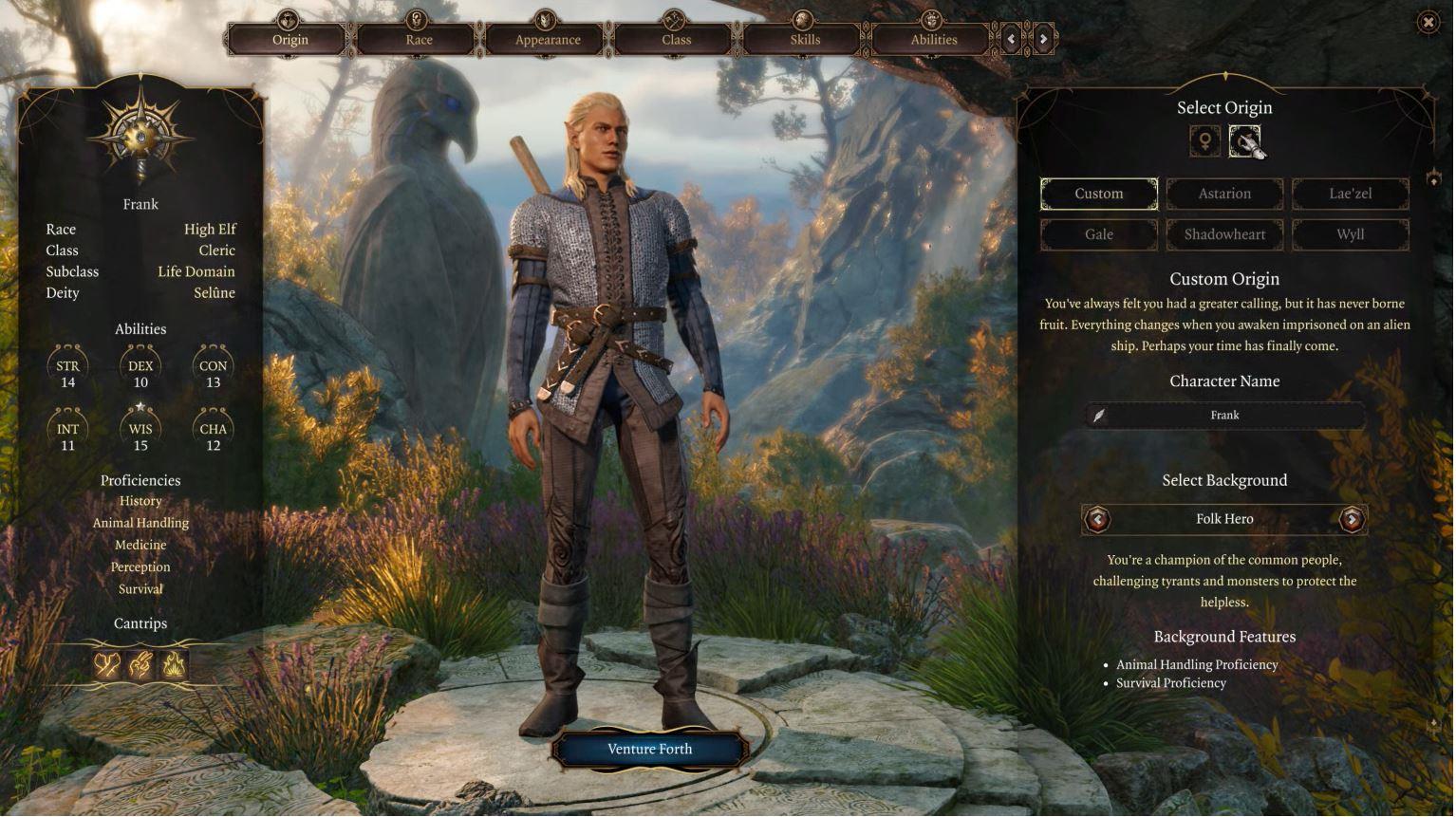 Obviously, Frank is not a High Elf, so I moved onto race and changed him into a dwarf. Dwarves have two sub-species in Baldur’s Gate III. Frank was originally created as a Hill Dwarf, so the group of dwarves that dwell in the mountains and are loyal to the king didn’t seem like a very good fit for him. I opted instead for the “Shield Dwarf.” Many of the Shield Dwarf’s traits seemed right for Frank, from the “cynical mindset” to overwhelming sense of loss these characters endure. Though Frank didn’t lose his kingdom to goblins and orcs, he is displaced from his (admittedly wretched) homeland, and he is still mourning the loss of his beloved wife Mork—who disappeared in the transition from Dark Sun to Baldur’s Gate. Plus, Frank has fairly low strength, so that +2 Strength bonus given to Shield Dwarves would be most welcome. 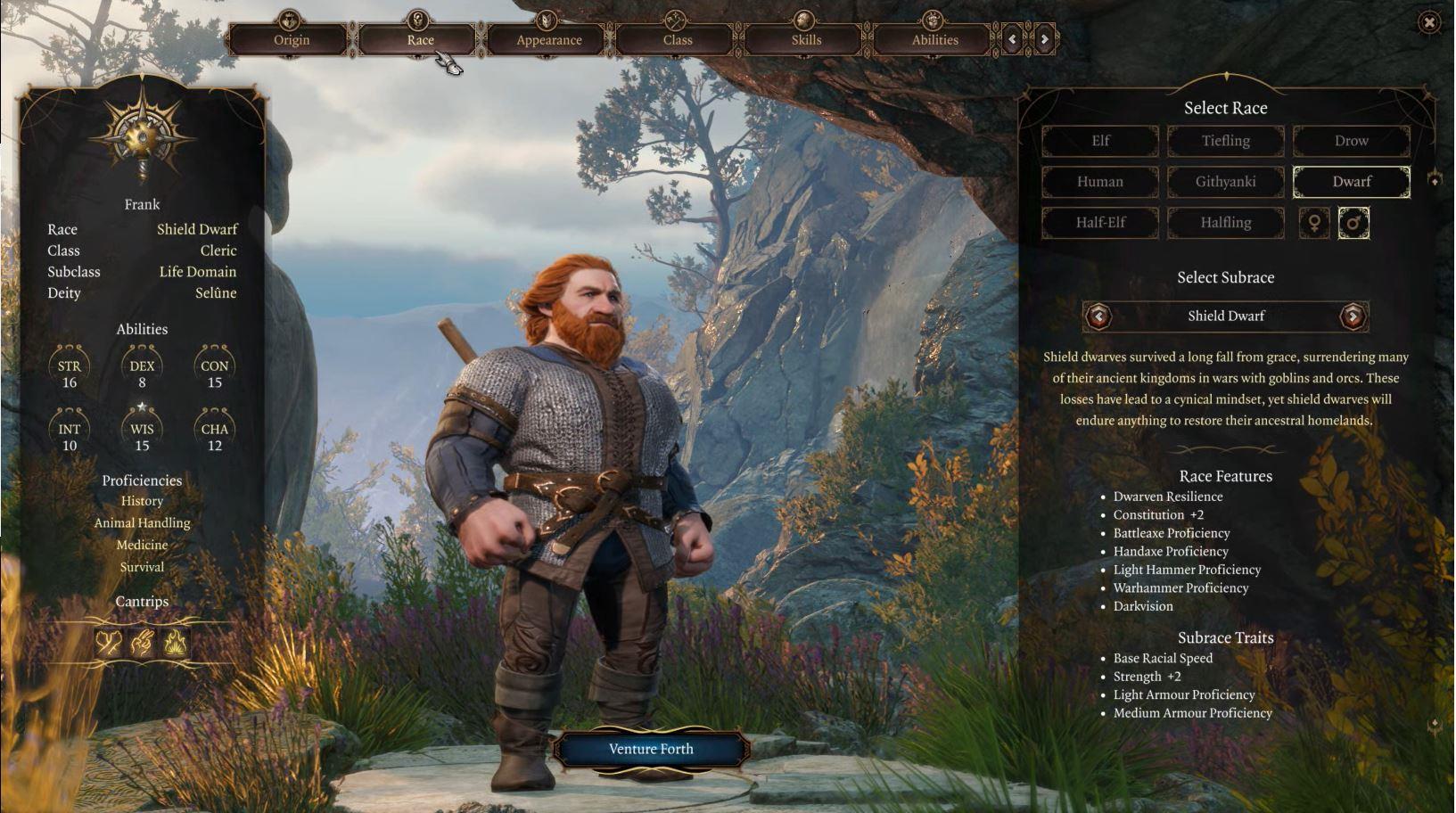 Frank is not the traditional dwarf one might find wandering around Baldur’s Gate. He is a veteran from a harder world, and his appearance is usually shocking to those that meet him for the first time. While the options to make Frank look freaky are somewhat limited in BGIII, I eventually settled on this somewhat punky look. I’ve always imagined him looking something like a reaver, so this tattoo and make-up combo helped set him apart from the crowd. Most of the beard options were far too tame for Frank, who would definitely rock some braids in his beard.

I changed Frank’s skin tone to make him look more sun-scarred. I wouldn’t have minded a few more scar options, but you take what you can get. There are only a few voice options, none of which conveyed the roaring I hear in my head for Frank, so I settled on the more coarse option available. I’m just going to have to use my imagination for Frank’s voice, unless Larian Studios wants to send me a script so I can record all of his lines. (Note: I could really do this. I have recording equipment, and I have Frank’s strange gravelly pirate-like voice down pat). 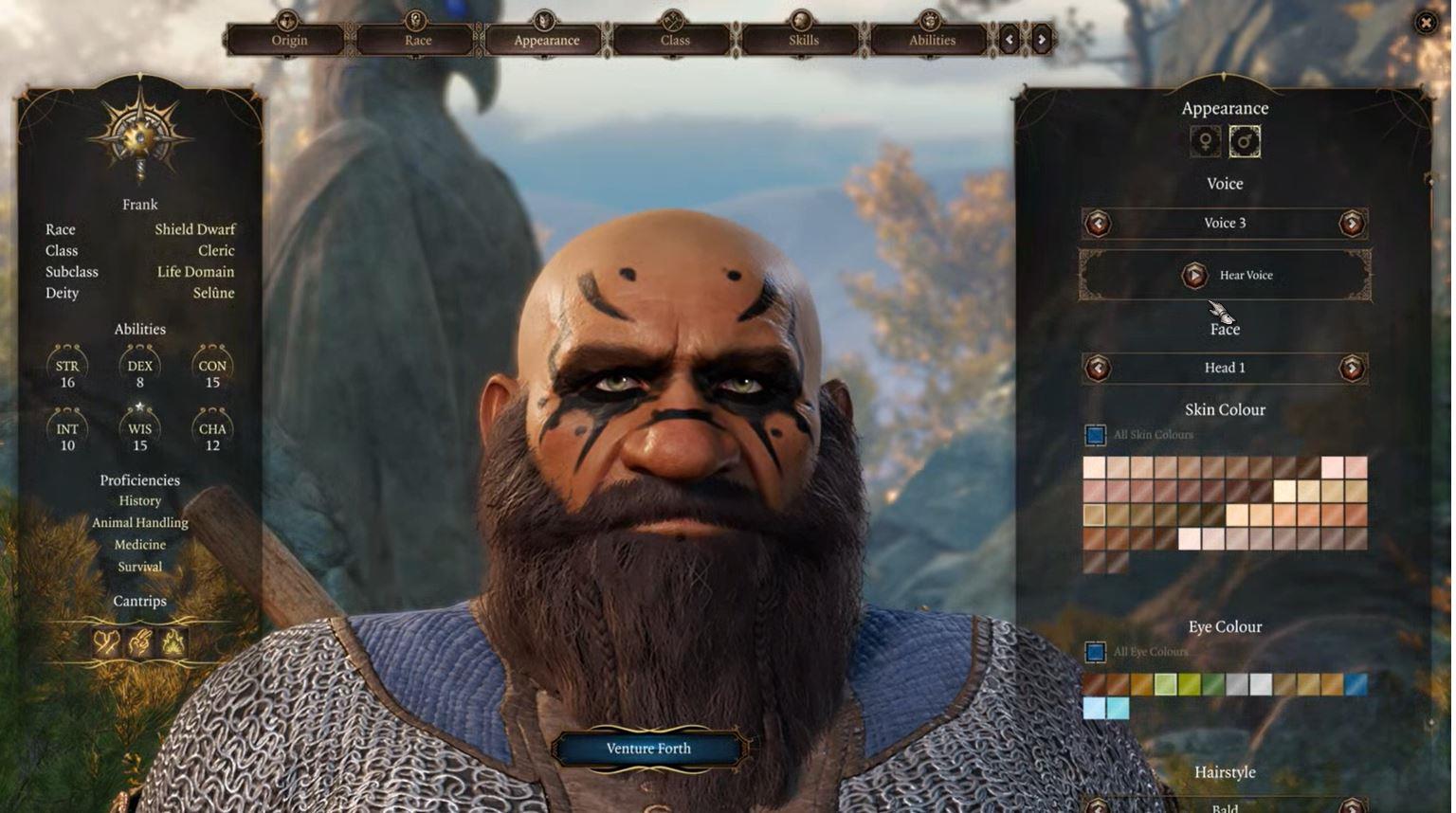 Now it was time to make Frank a ranger. Maybe not the best choice for a dwarf, but Frank is what Frank is. The Favored Enemy caused me a bit of consternation, as Frank’s original design had “Undead” as his foe of choice. However, scanning through all of the options, I landed on Bounty Hunter as the closest in spirit to Frank’s character. Frank’s Natural Explorer was originally focused on Desert terrain, but that was not an option for Baldur’s Gate III, so I decided to lean in on Frank’s Animal Handling proficiency (which never comes into play in our campaign, but hey, it’s there), and selected Beast Tamer. 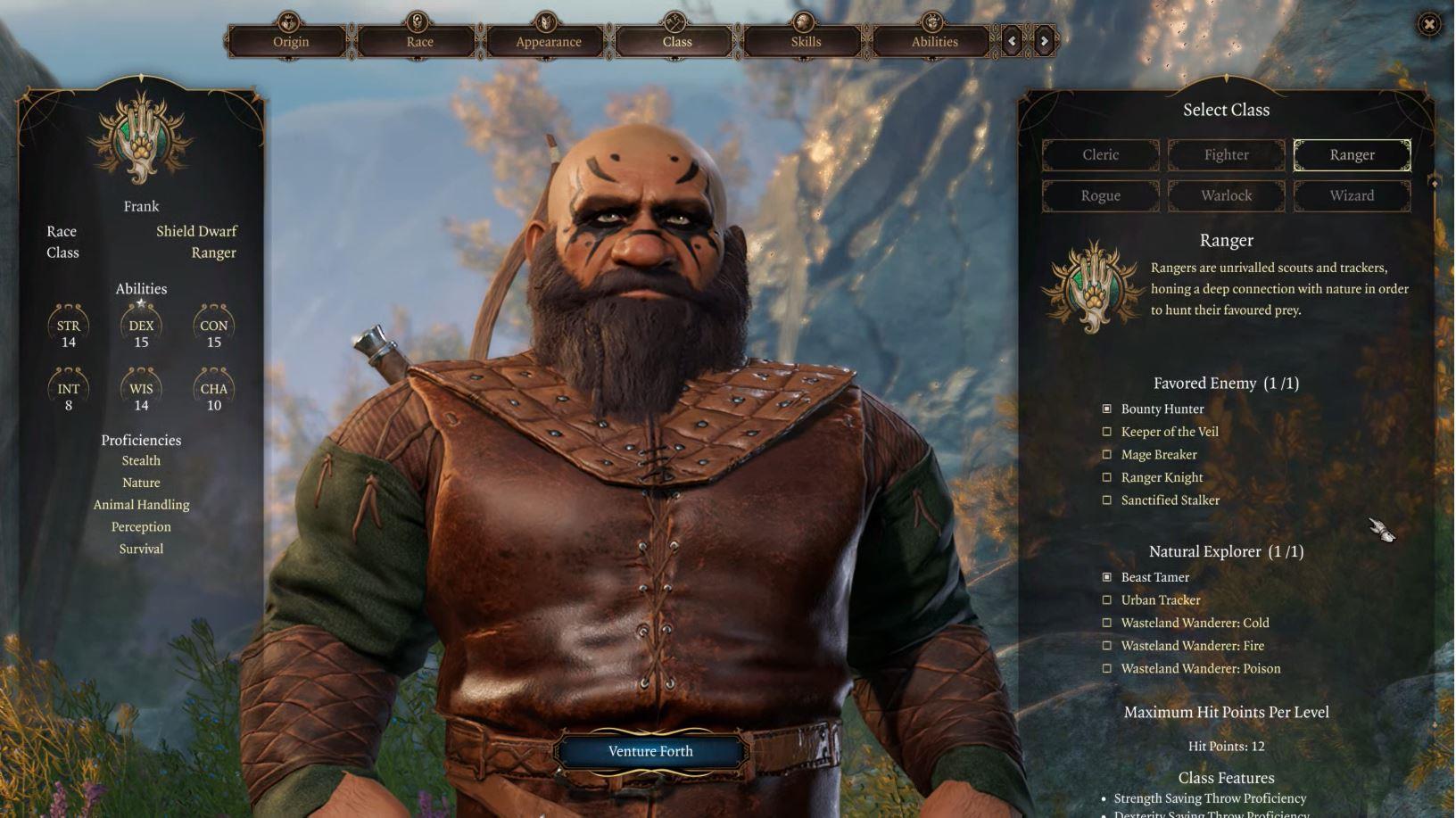 Frank’s skills easily lined up with what already existed on his character sheet. In fact, Baldur’s Gate III automatically selected most of them for me without my having to sweat it at all. The only skill I was unable to carry over was Acrobatics. I rolled Frank so long ago, I can’t really remember where Acrobatics came from, and its one of those skills that doesn’t come into play that often in our campaign, so I’m not going to worry about it too much. My big concerns were that Insight, Investigation, and Perception carry over, which they did. Frank is not the brightest bulb, but he is cunning, with sharp natural instincts. These skills help make that real. 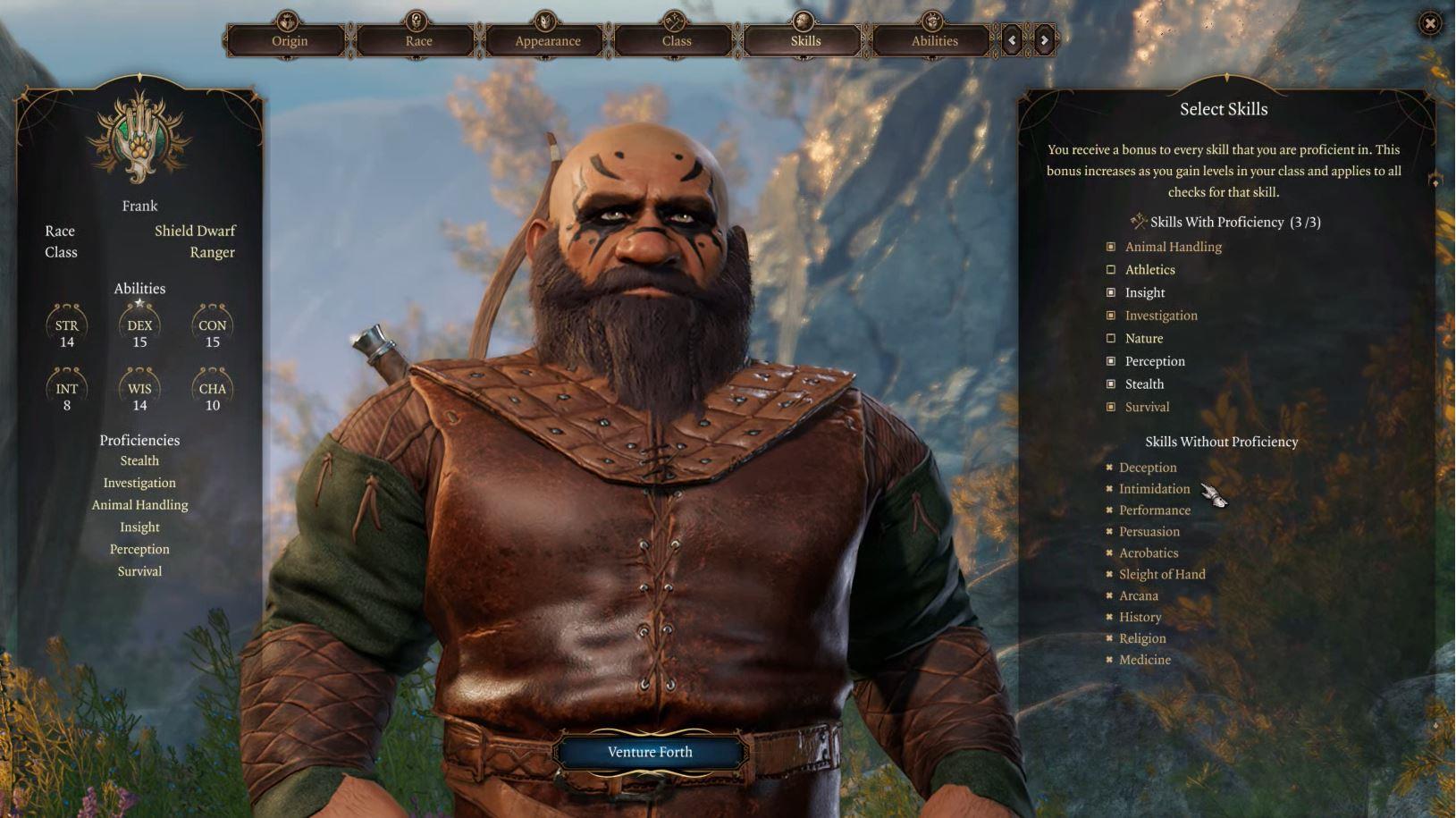 D&D’s systems matched my original Frank’s ability points almost precisely. Frank’s Charisma was looking a little high to me at 10, so I dropped a point out of that and sunk it into intelligence (which is still low compared to the 12 on his character sheet). Still, with 15 dexterity, 15 constitution, and 14 wisdom, Frank is closer in stats to his original build than I had hoped to get him.

Frank is ready to roll in Baldur’s Gate III. How well his attitudes and proclivities will translate into Larian Studios’ more structured format remains to be seen. But I’ll be honest (and John and Randy will probably back me up on this), the citizens of Baldur’s Gate had better watch out. Frank has come to town, and while he might have lost his bucket, he is more or less intact. With a song on his lips and a weight on his heart, he is ready to paint the town red.