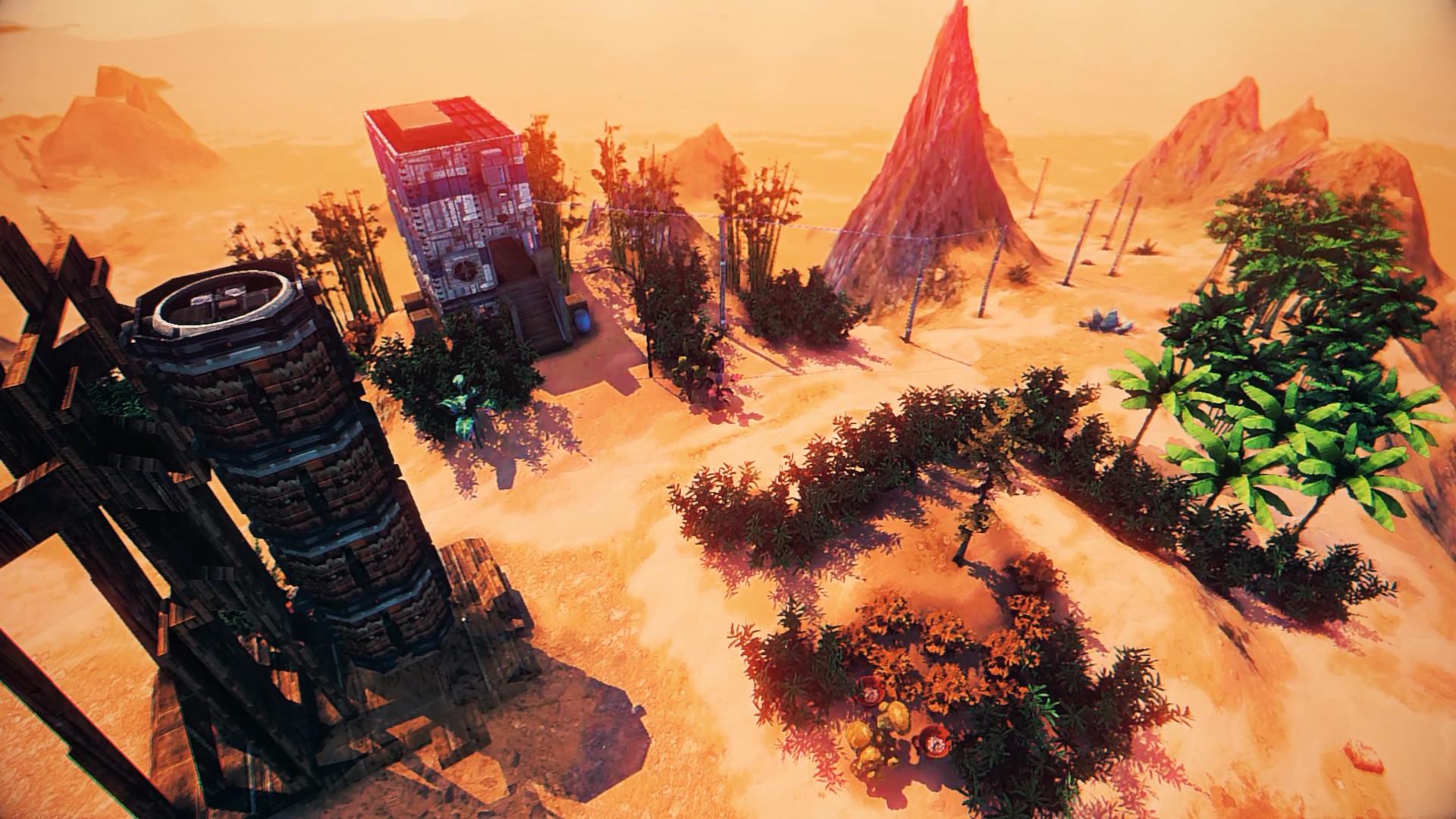 Ragnorium had me at hello, I’m not gonna lie. The game looks like you’re playing it on a screen burnt CRT monitor, and sounds like a synthwave strung up at an A.I. flesh fair--it’s gritty. A gritty strategy survival sim in the vein of Banished or Rimworld. Those comparisons may be lofty, but one-man developer, Vitali Kirpu, is already doing enough good things to have caught the eye of publisher Devolver Digital.

Ragnorium is invisibly subtitled “Planet Recolonization Odyssey,” which is largely appropriate, though I think Kirpu mostly wanted to make an acronym out of PRO. At its most basic, Ragnorium has you plunk down two or three colonists on a scorched planet. You need to get your colonists to a self-sustained state, but those first days are like a glitched-out episode of Naked and Afraid. Just banging rocks together and sewing leaves into a skirt. 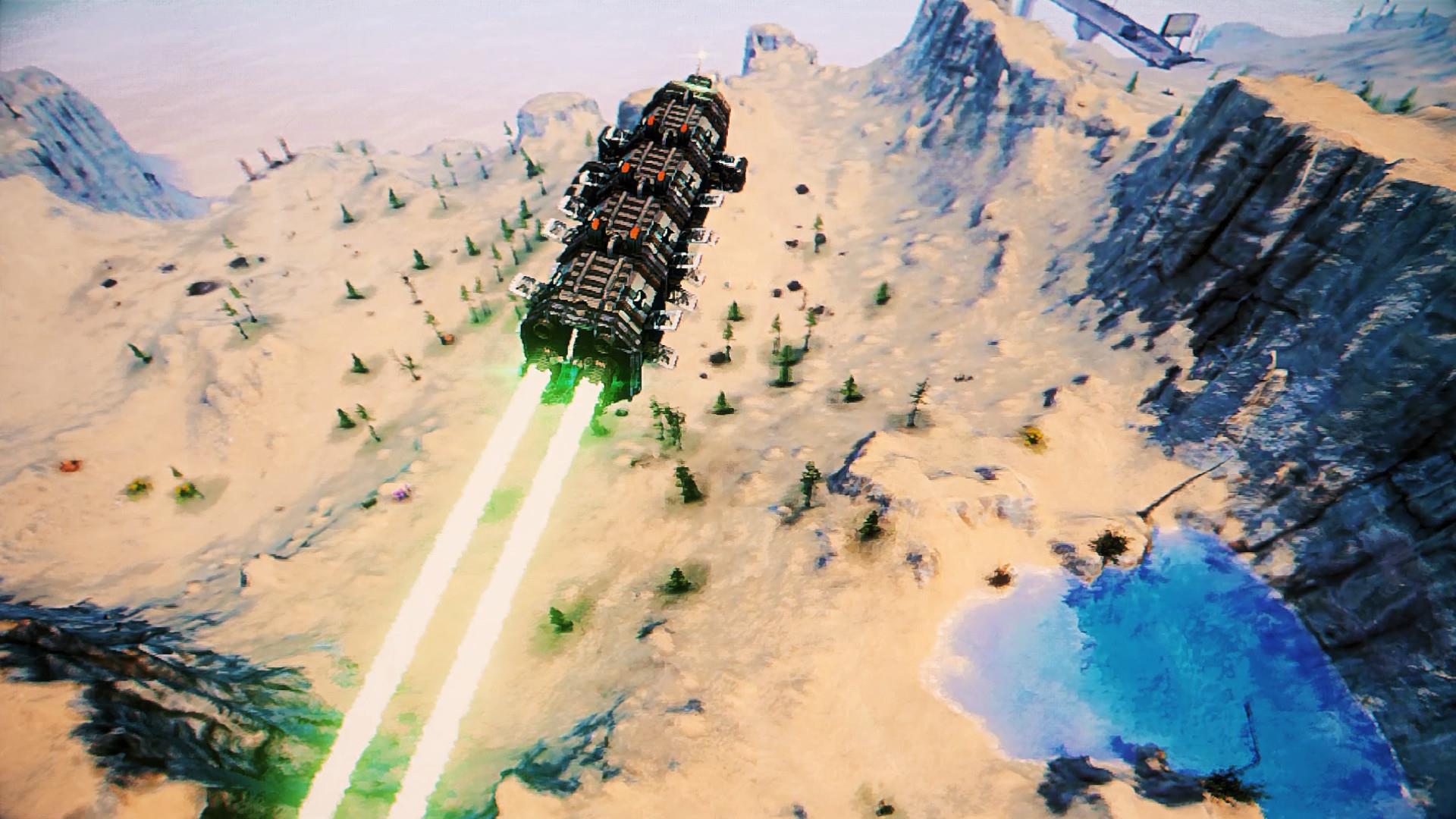 As the game gives you suggestions of objectives to accomplish, you likewise suggest to the colonists on how to go about beating those objectives. “Suggest” is the keyword. Sometimes you’ll highlight a tree for your colonists to chop down and, as if one of them was just itching to become a lumberjack, they’ll get right on it. But other times, you might highlight some scrap metal for them to place in storage, and it’ll seem like your suggestion is falling on deaf ears.

Whether your pods land in easy, normal, or hard conditions--you select the landing zone from the modular spaceship you built, flying in low orbit--the first steps to surviving Ragnorium are often identical. Touch down, wake up, build a campfire, and pray the flint needed to start the fire isn’t randomly sitting in the middle of a den of bears. 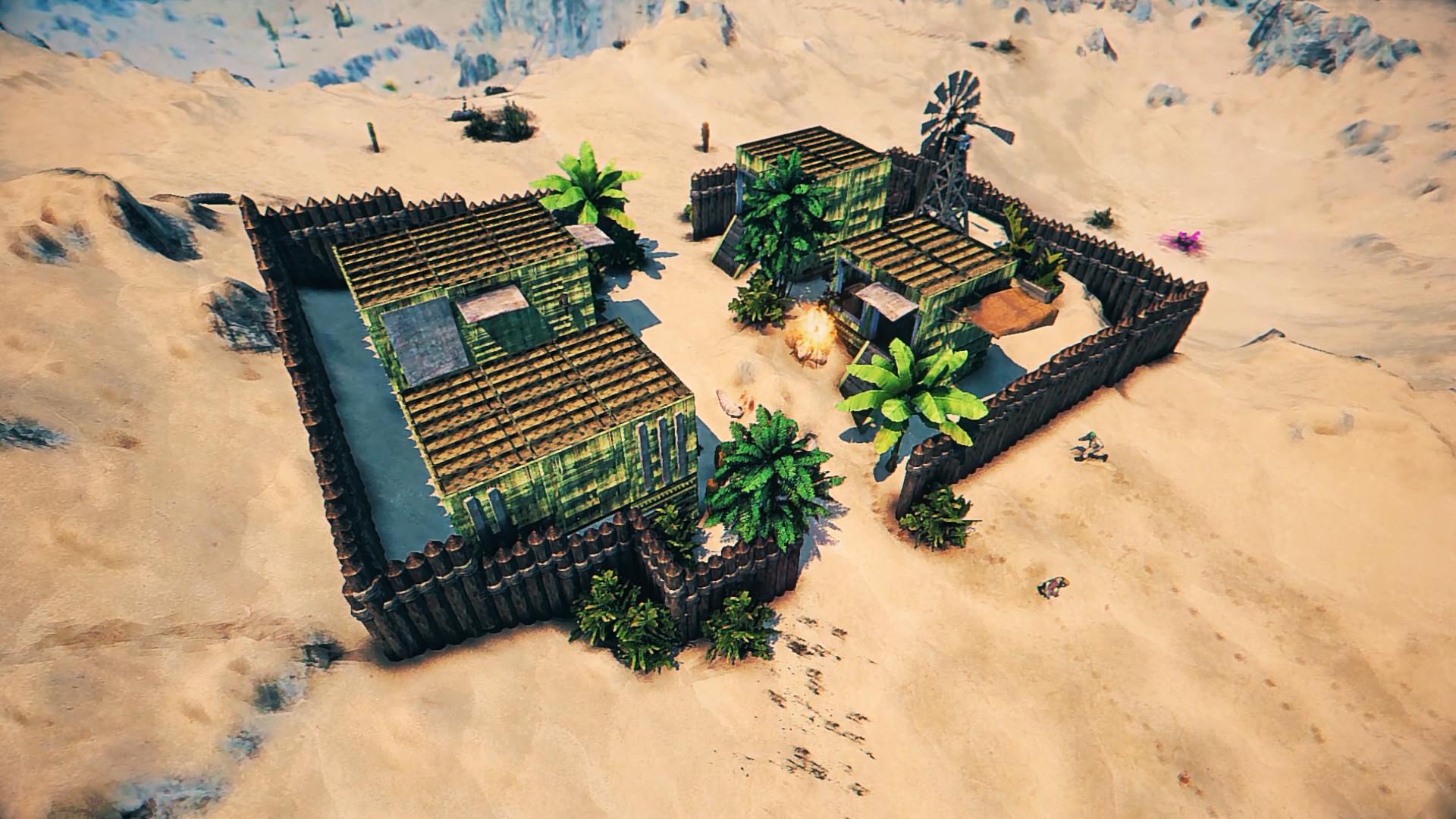 From your digitally noisy-looking appearance through the gas cloud, Ragnorium makes you feel like the inevitable return of the misunderstood bad guys. Not like you’re the Reapers from Mass Effect. More like you’re the mind worms from Sid Meier’s Alpha Centauri. And there’s some business about a holy crusade coming, but I haven’t survived long enough to build a second bungalow, let alone fend off an alleged space pope.

A day in Ragnorium starts off like Fortnite, with you in your modular space bus that you built, looking out the window, asking your crew, “Where we droppin’, boys?” Your newly developed colony ship slowly courses over the ragged landscape. There’s only one map so far, but at the time of this writing, a second is on the way. Remember, this is the work of a solo developer. What they’ve accomplished already is artfully impressive and laced with a dry wit, but equally laced with what are essentially survival-sim fart jokes. 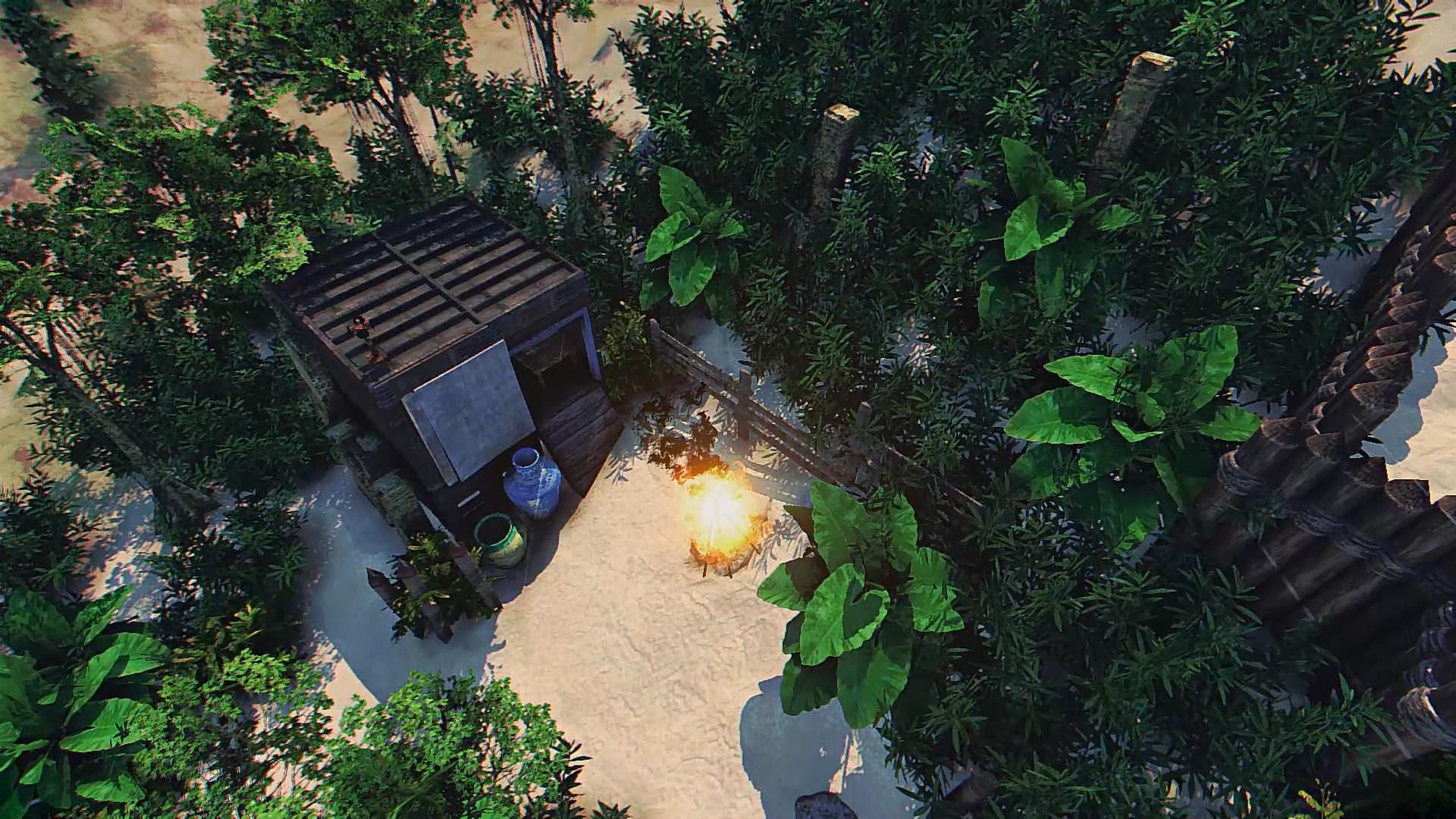 So you scan the utterly desolate landscape below until you find a suitable-looking habitat--and fire off your habitat pods. Depending on how hard you want to make things on yourself, you’ll aim for a copse of trees (easy difficulty), the middle of the dusty badlands (hard), or somewhere in between (normal).

All three of my colonists--they’re all clones crafted in a space station up in orbit--are immediately distressed that they have a “reproduction organ exposed.” I zoom in and, indeed, the penises I’m seeing seem to indicate just that. After tasking them with chopping down trees for wood resources, one of them became a “branch expert,” placing an enormous crown of branches on their head, and getting a significant bonus to harvesting wood. 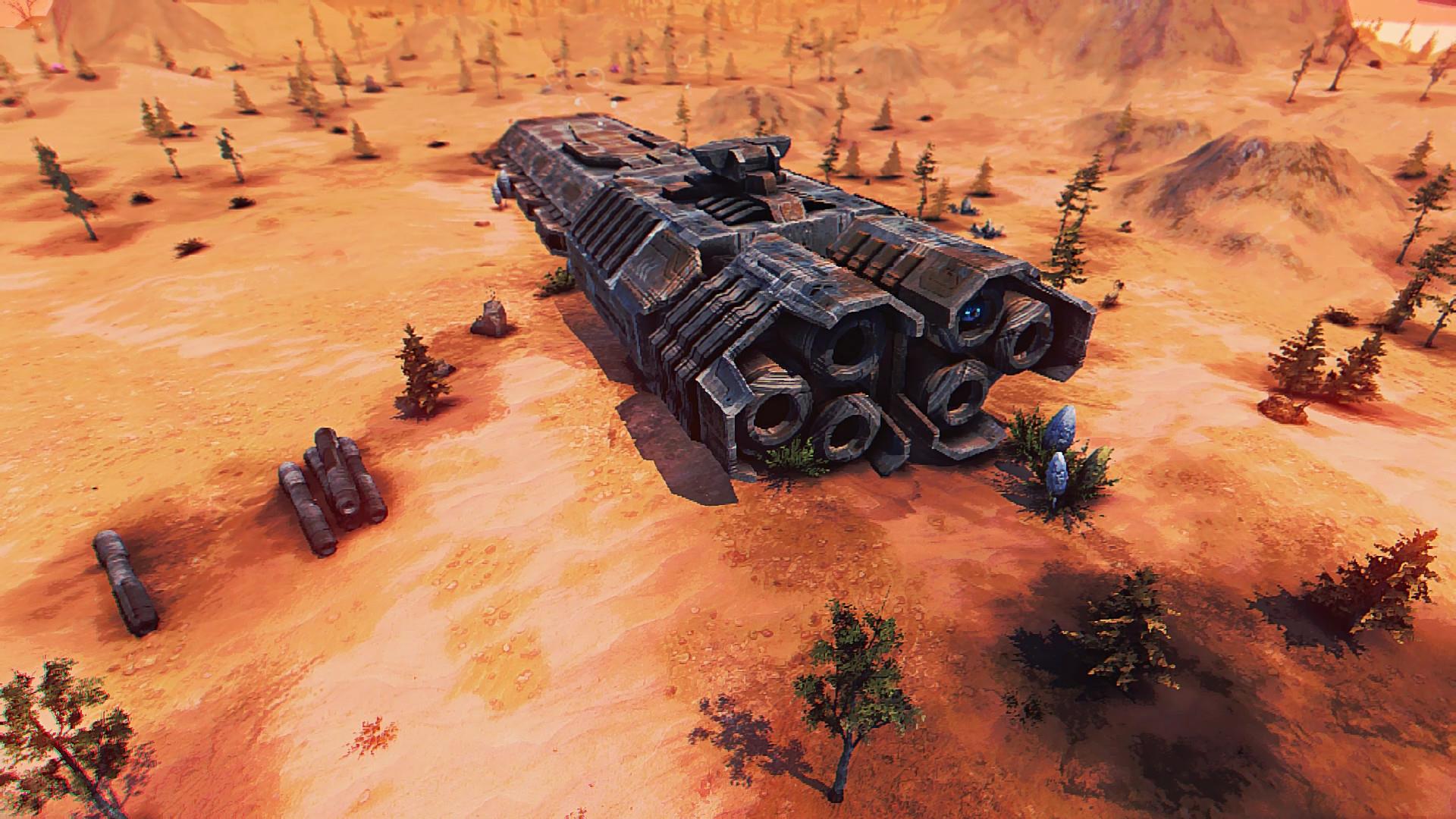 I'm doing my best with my first colony, but my colonists are freezing into literal ice cubes, I've had to send half of them off on some Fellowship of the Ring-length trek to get flint just to start a fire, and there's no water around so I'd love to research urine filtration as the game suggests, but I can hardly make a leaf bracelet, let alone building a system that can pull clean water out of piss.

Everybody was being weird about walking around naked, so they all wear leaf skirts now, which is fine except for the one dude that will only wear leaves on his wrist slot and not around his junk so I don't even know what's up with that guy. It's early access. Stuff like that happens. I roll with it. 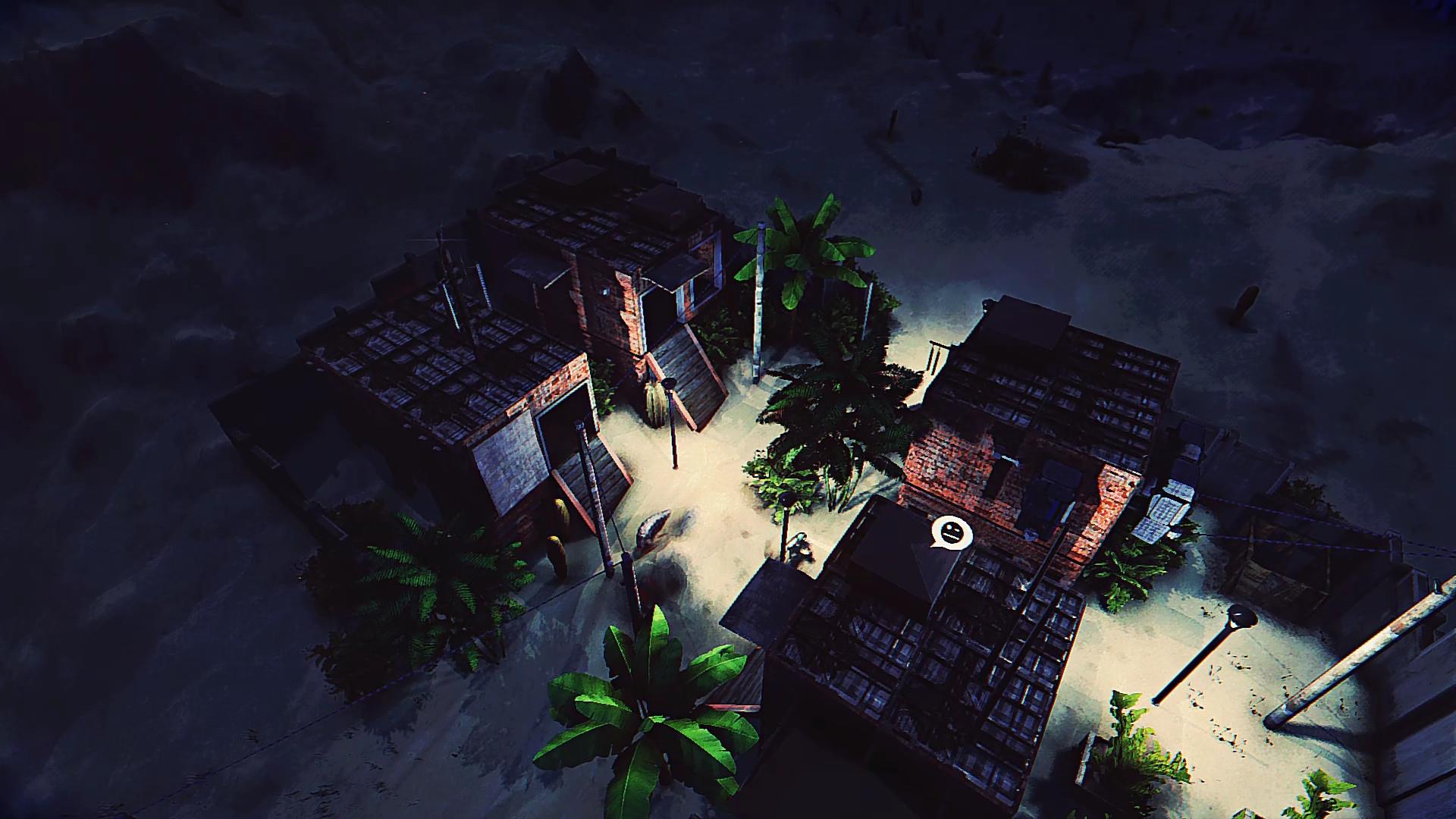 After finding a way to find more food (thank you, research table!) my branch-crowned colonist completely whiffed in a fight with a little sandworm. She was bleeding out. There was a dark red puddle soaking into the sand. I right-clicked hoping I could suggest another colonist come heal her, or at least staunch the bleeding. But that right click revealed to me, in a horrifyingly matter-of-fact manner, that she could be skinned and harvested for fat, or buried. So, while I couldn’t resort to outright cannibalism, I might’ve been able to fry up some eggs in human fats.

Had one character build an extension on a house, but failed to build a doorway out. Not even sure how he managed that one, but he did it with a 20 percent bonus to his build speed. That’s called “getting nowhere fast.” 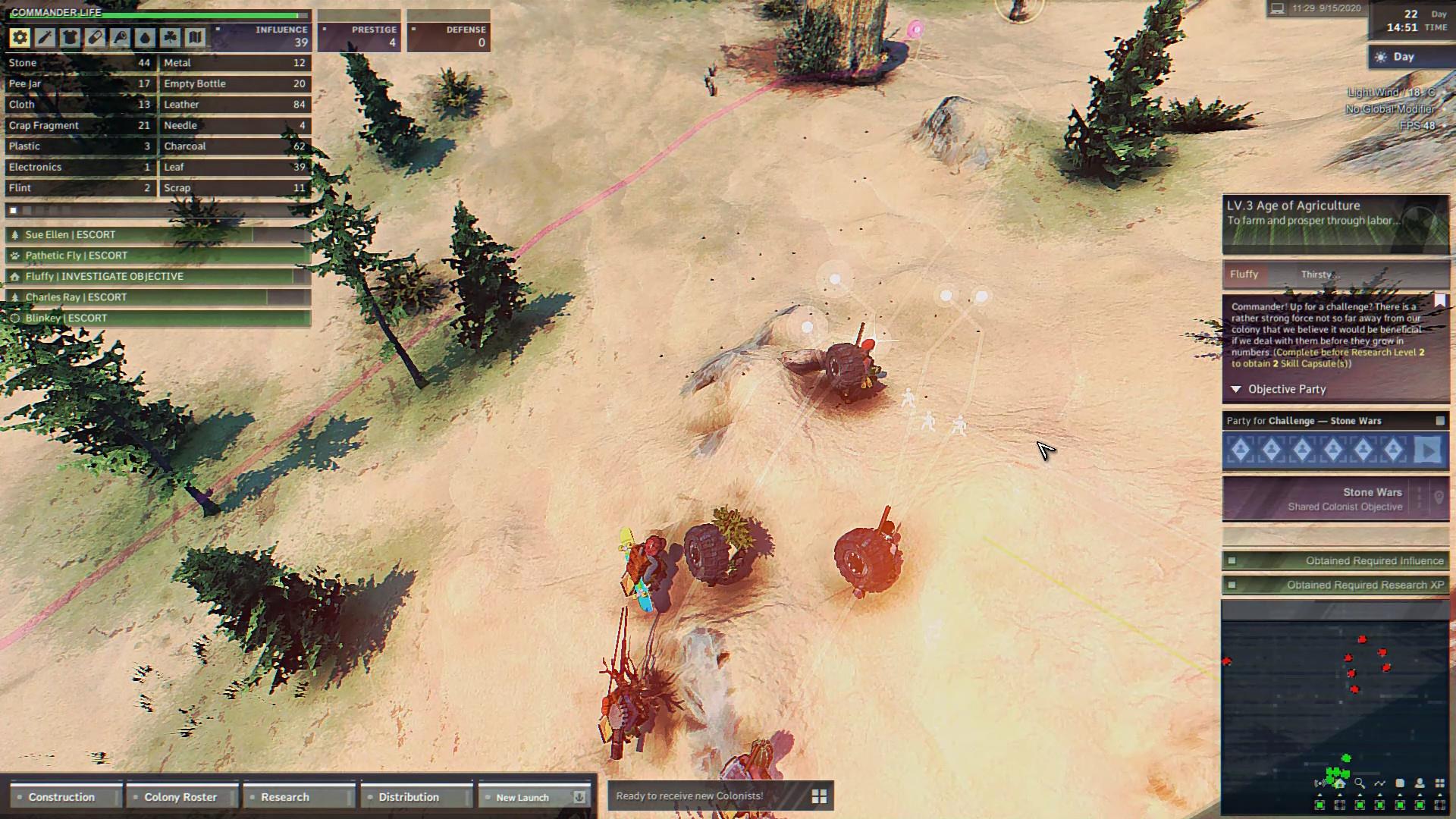 I thought stomping on poop was a weird way to clean up the colony, but my only options were to stomp on it or relocate it. One colonist stomped on it for what seemed like 10 full in-game minutes, then walked over to the campfire and puked up her guts. Which is the precise moment my colony was attacked by, I kid you not, a Crap Golem. One of my other colonists, who had the Cactus Jack designation and indeed wore a cactus hat on his head, beat the, um, crap out of that thing. It left behind a Crap Fragment which I stored for some reason. A pop up told me that the crap fragment coud be mixed to create brown dye.

That’s the sense of humor we’re working with here. Frankly, I’m cool with it. I’m exhausted of the three-ring circus of Borderlands or the capitalism-overdrive of The Outer Worlds. This is just stuff to make you raise your eyebrows, think the word “LOL” in your head, and then move on. 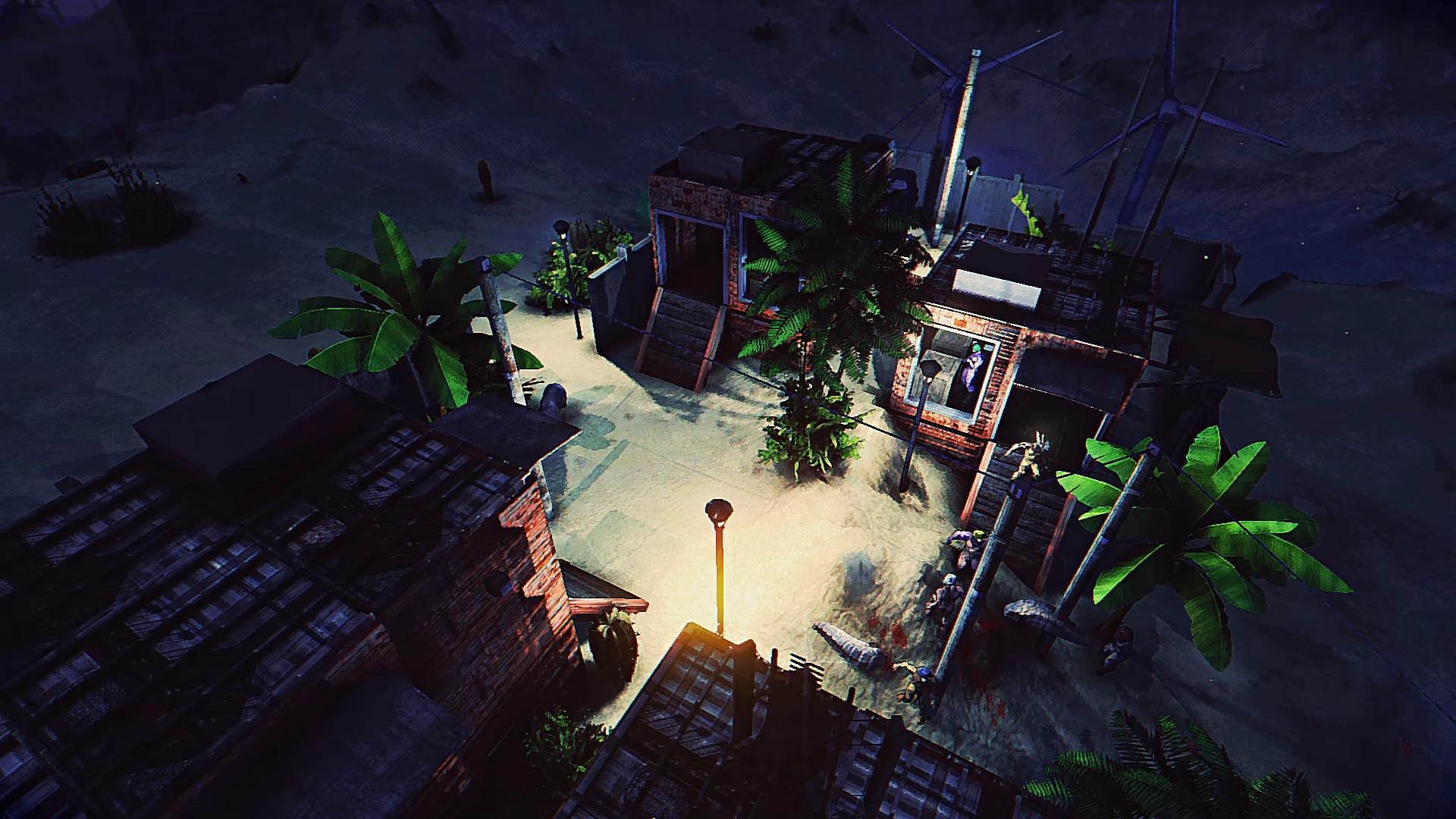 Gameplay-wise, it's hard to deal with my suggestions being utterly ignored. Take Capt. Cuddle Muffin, for instance (again, you don’t get to change the names). I don’t know how bad of a colony captain Cuddle Muffin was, but everybody else sure let him bleed out on the ground when we had five or six perfectly good rolls of bandages just sitting 20 yards away in our storage area. I mean, they just let Cuddle Muffin go out like that. That’s cold, man. Especially Cambria, who first landed on this planet with Cuddle Muffin. Cambria happily skinned the Garnworm that’d killed Cuddle Muffin--but she couldn’t be bothered to, you know, wrap his wounds with a little leaf bandage. It was time to start digging graves.

This colony ended in tragedy shortly thereafter as I sent all five of my colonists to take on a growing enemy tribe around the next ridge. I knew I’d made a mistake as soon as I realized they had torches, and all I had were sticks. Never bring a stick to a torch fight. RIP Colony 1. Send in Colony 2.

Update, Colony 2 (as well as colonies 3, 6, and 7) all died in their sleep when raiders came in at night and attacked them in their beds. Only at this very moment am I realizing that I should’ve manually woke them up. These aren’t exactly the narratives you can get out of a session of Rimworld, perhaps, but it’s a start.

And there are plenty--plenty, my friend--of errors and glitches to contend with between here and final. Just started on a fresh map a few minutes ago that, I kid you not, didn’t have a single cactus with any water to be found anywhere within a realistic distance to travel; and believe it or not, taking an empty jar (which they have) to a big blue lake (which is right there) and filling it up with water (the whole thing is water!) is not an action I can “suggest” these clones take. They’re all going to die soon, dehydrated under Ragnorium’s relentless sun, sending me back to the main menu. 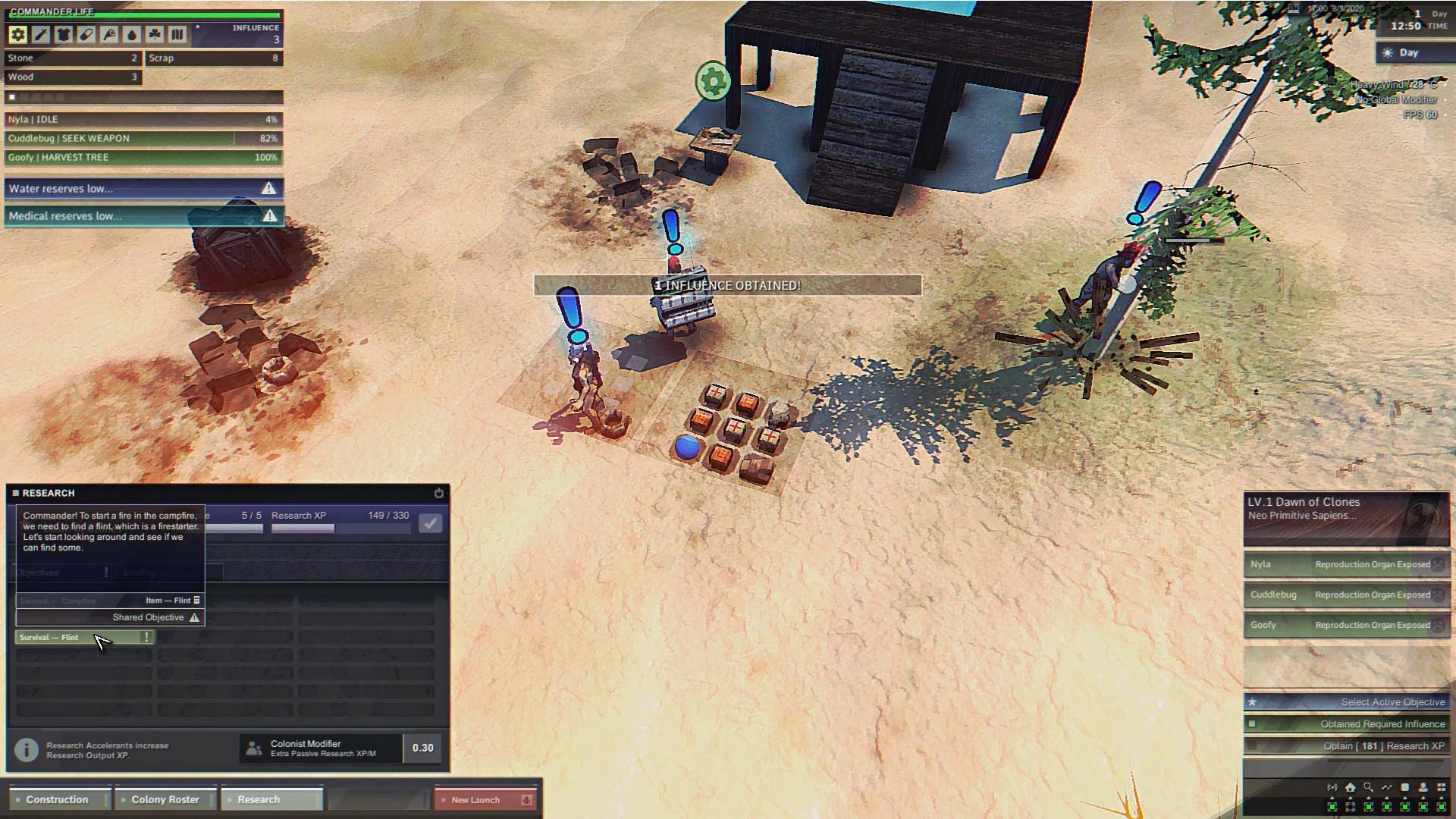 But learning is half the battle, and Kirpu is working hard, adding things, subtracting things. There’s a new update every 24 or 48 hours it seems. So, I’m looking forward to how this one ends up. Ragnorium feels foreign enough to keep you on your toes, familiar enough to give it one more go, and, despite its fantastic Rimworld influences, feels like it’s pursuing a unique vision. Even if that vision, as one Steam reviewer put it, looks like a deep-fried meme. Heck, maybe one day I'll even survive long enough to see some of the bigger buildings you see pictured throughout this preview.