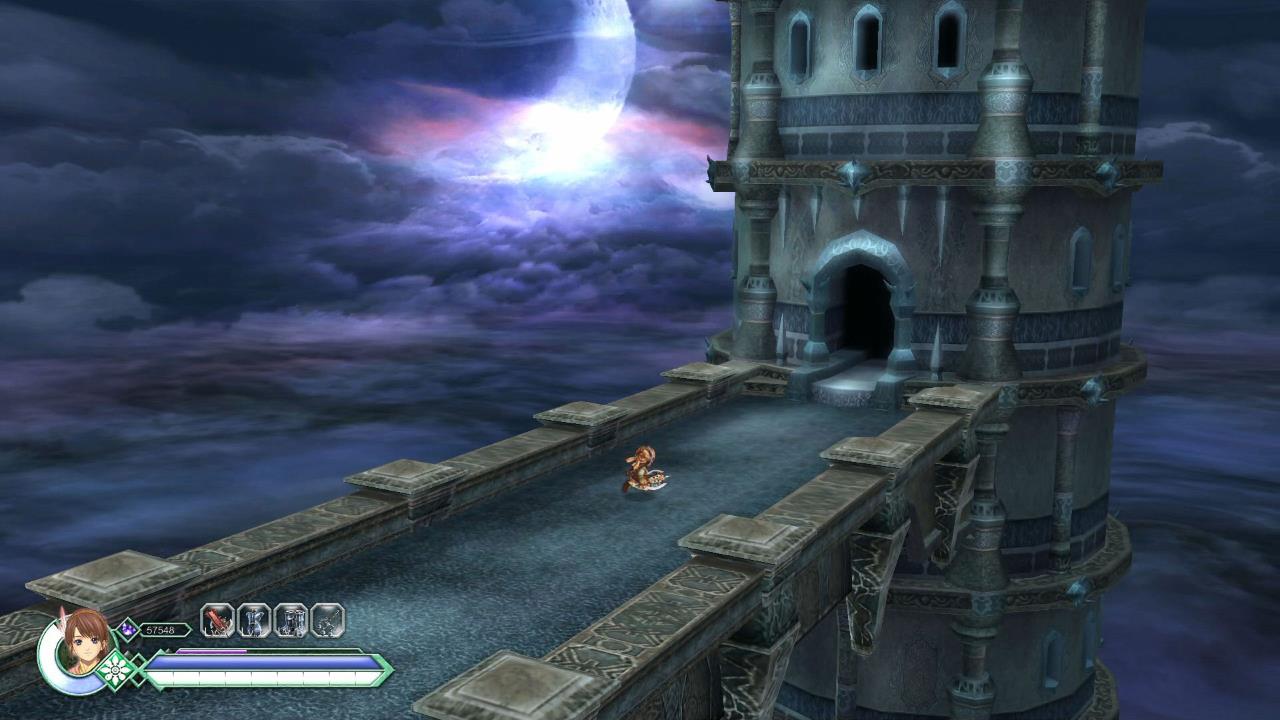 Six years ago I purchased a Humble Bundle that contained several games and among them was Ys Origin. I’ve attempted to play the Ys series prior with Ys III: Wanderers From Ys on the Super NES. I failed miserably, but seeing some screenshots of Ys Origin, I decided to give it a shot as it looked different than the previous games. It quickly became one of my favorite games on Steam and I enjoyed the heck out of it. As a fan of real-time RPG combat it was a game that was right up my alley. Recently we had the opportunity to review Ys Origin on the Nintendo Switch. As soon as I found out, I jumped at the chance to revisit the game. With that, it’s time to climb up Dram Tower and learn a bit more about the world of Ys with Ys Origin. For anyone curious, the most common ways I’ve heard to pronounce Ys is eess (as in the letter “E” pluralized) or eece (as in “fleece” without the “fl”).

Ys Origin lets you play as one of two characters from the start of the game with a third being unlockable down the road. The two you start with are Yunica Tovah, a knight apprentice who wields an axe, and Hugo Fact, a magician who uses an object called the Eyes of Fact. The story is mostly the same regardless of who you choose, though some elements will differ in terms of dialogue and a couple boss battles. Set 700 years prior to the events of the original game, Ys was a paradise under the auspices of its twin goddesses Lady Reah and Lady Feena, as well as its six great Priests. 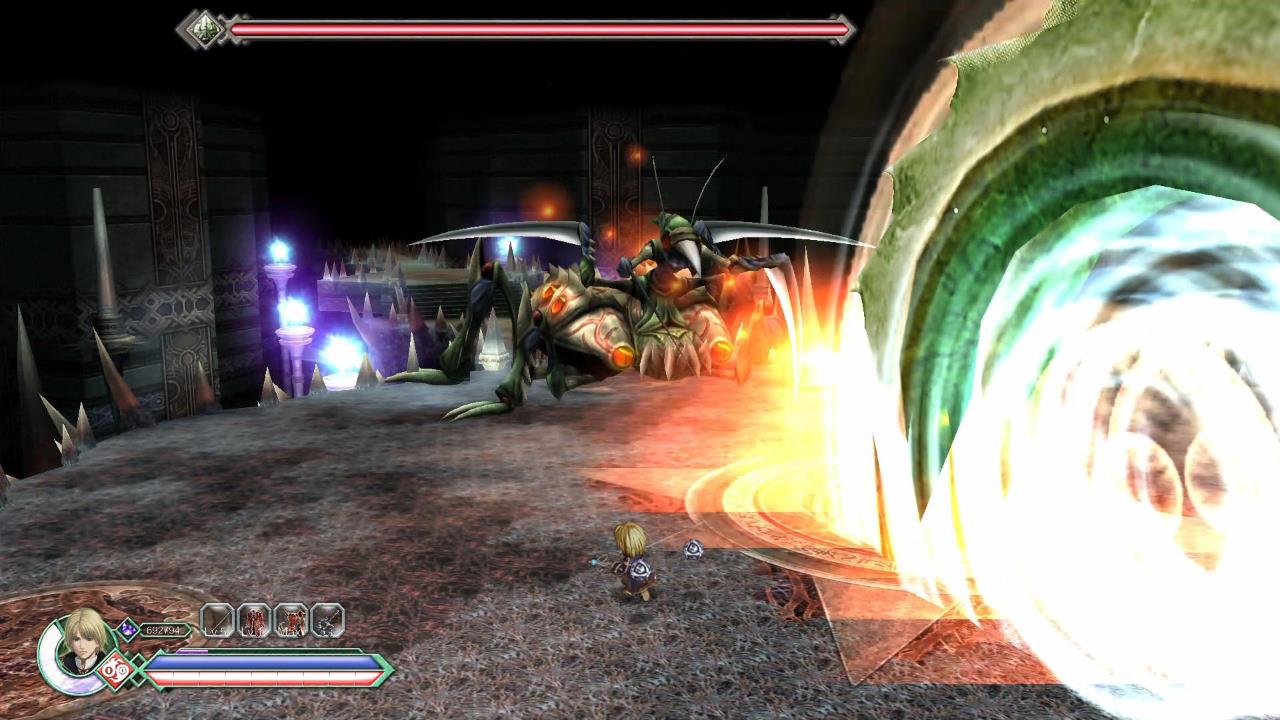 Within Ys was the Black Pearl, an object from which the people of Ys would receive blessings. However, without warning Ys came under attack by demons. The people of Ys sought shelter in the Solomon Shrine where the Goddesses and the six Priests used the power of the Black Pearl to lift Ys up to the heavens. The demons wasted no time in constructing a tower to continue the battle and, soon after, the Goddesses went missing. A search party was formed to scale Dram Tower and seek out the missing goddesses.

While it doesn’t matter much for the story who you play as, Yunica and Hugo have their own strengths and weaknesses. Yunica is melee-based with her axe and does decent damage output while having an okay range with her swing. Hugo’s Eyes of Fact have a pretty good range for attacking enemies from a distance, though he moves a bit slower than Yunica. The goal of the game is to make your way through the Dram Tower and defeat any enemies you happen to stumble across. 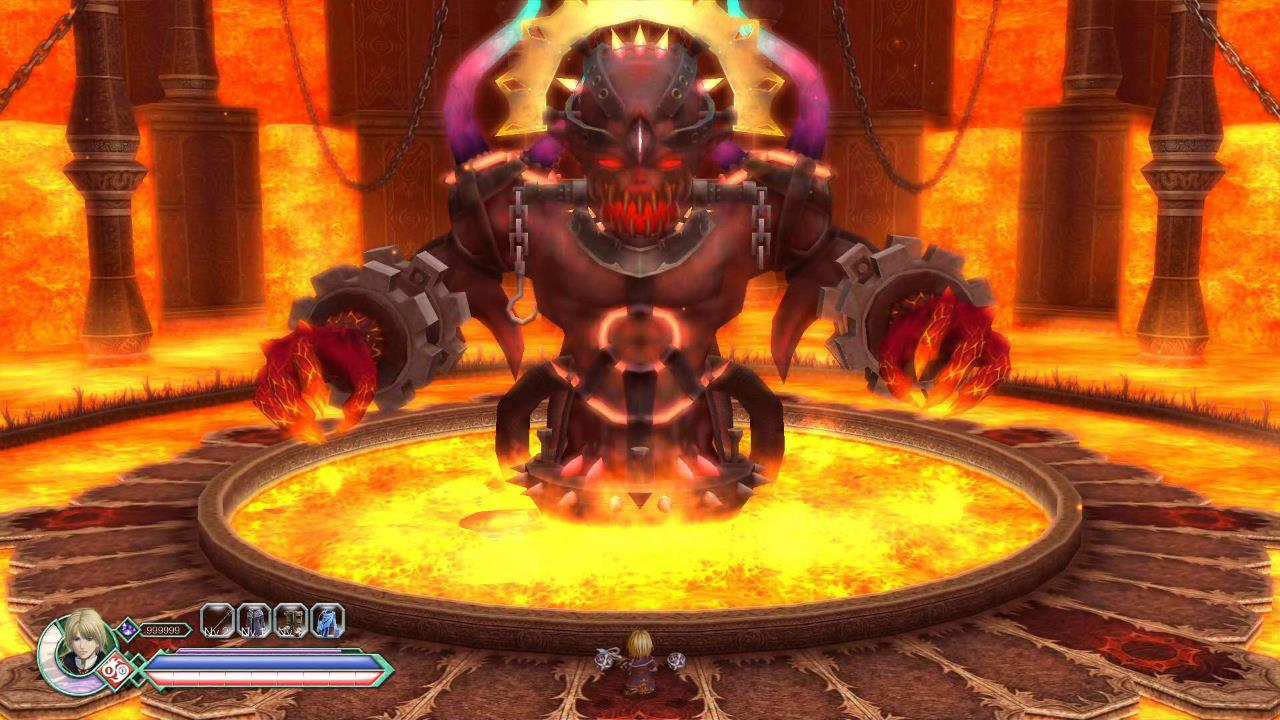 As you defeat enemies, they tend to drop a few items that right off might not make much sense unless you look at the in-game manual. Enemies can drop several types of crystals that temporarily buff your strength, defense, and magic, as well as provide a small health replenishment. Constantly attacking enemies will also increase an XP bonus that gives you more experience per enemy defeated, up to a 1.99x multiplier. These bonuses and buffs will eventually go away if you don’t keep collecting enemy drops or attacking enemies for a short period of time. Finally you’ll find SP that you can spend on blessings.

As with any RPG, you’ll find new gear and upgrades along the way. Occasionally you’ll come across ways to strengthen your main weapon, and you can find new armor in chests strewn around the tower. You’ll also eventually gain access to different types of magic that give you new attacks or abilities by using MP (though Yunica uses melee attacks, her special attacks do utilize the MP bar as well). Finding certain gems, such as Emeralds or Topazes, will increase the power of that magic. 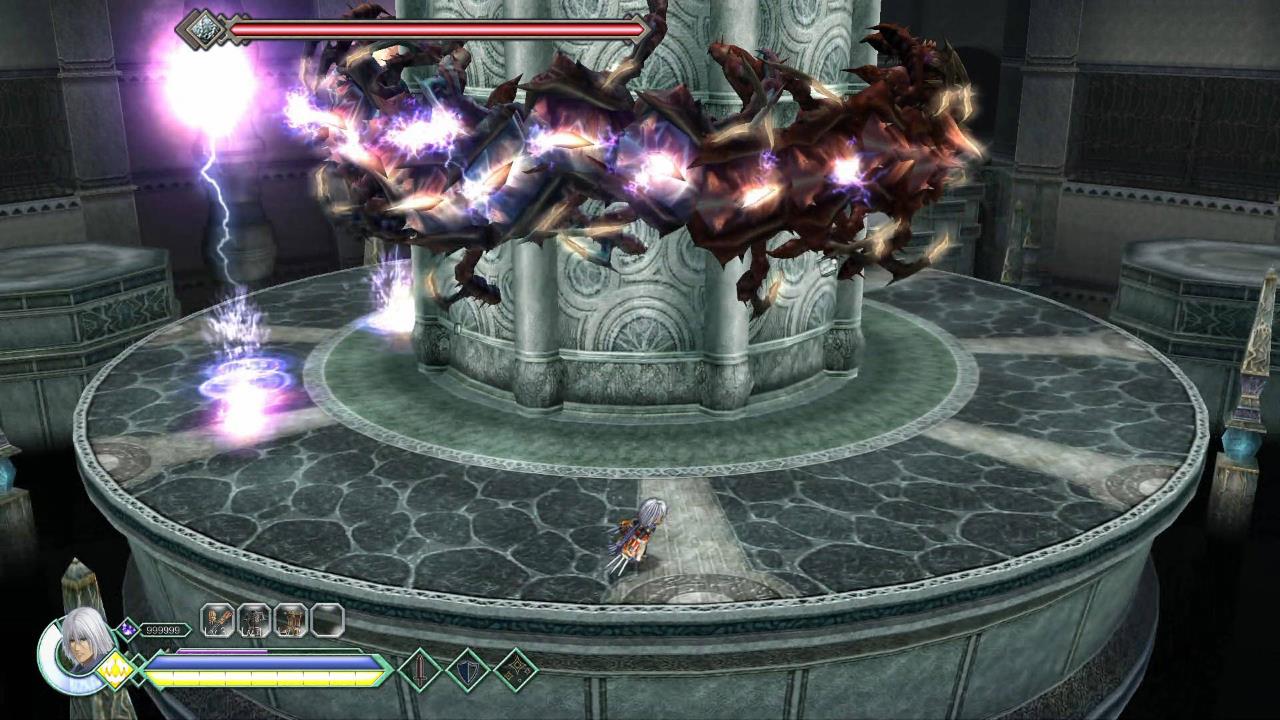 Another way to upgrade your gear and abilities are the aforementioned blessings. Throughout your journey you’ll come across goddess statues that, once cleansed, serve as save points. You can use a crystal you get at the start of the journey to teleport to any cleansed statue. The statues will also let you spend SP on blessings which range from giving your current armor pieces +1 defense, to strengthening your main weapon, to increasing the healing ability of healing items, and more. The SP cost of the blessings range from pretty low to wickedly high. The higher-cost blessings are more geared for the end-game. Also, given that most new armor you’ll find gives a substantial increase in defense, a +1 boost might not seem worth it. Play the game long enough, however, and you’ll learn how crucial that +1 bonus can be.

Ys Origin offers a few difficulty levels ranging from rather easy to downright insane. Even on Normal difficulty the enemies aren’t to be taken lightly. Naturally you’ll have to adjust how you play depending on who you’re playing as, but it might not always be wise to just rush in an ambush everything in sight. Even then when you’re at the point where the normal enemies go down with just a few hits, the bosses will make you rethink any strategy you may have—and sometimes can even feel a bit unfair. 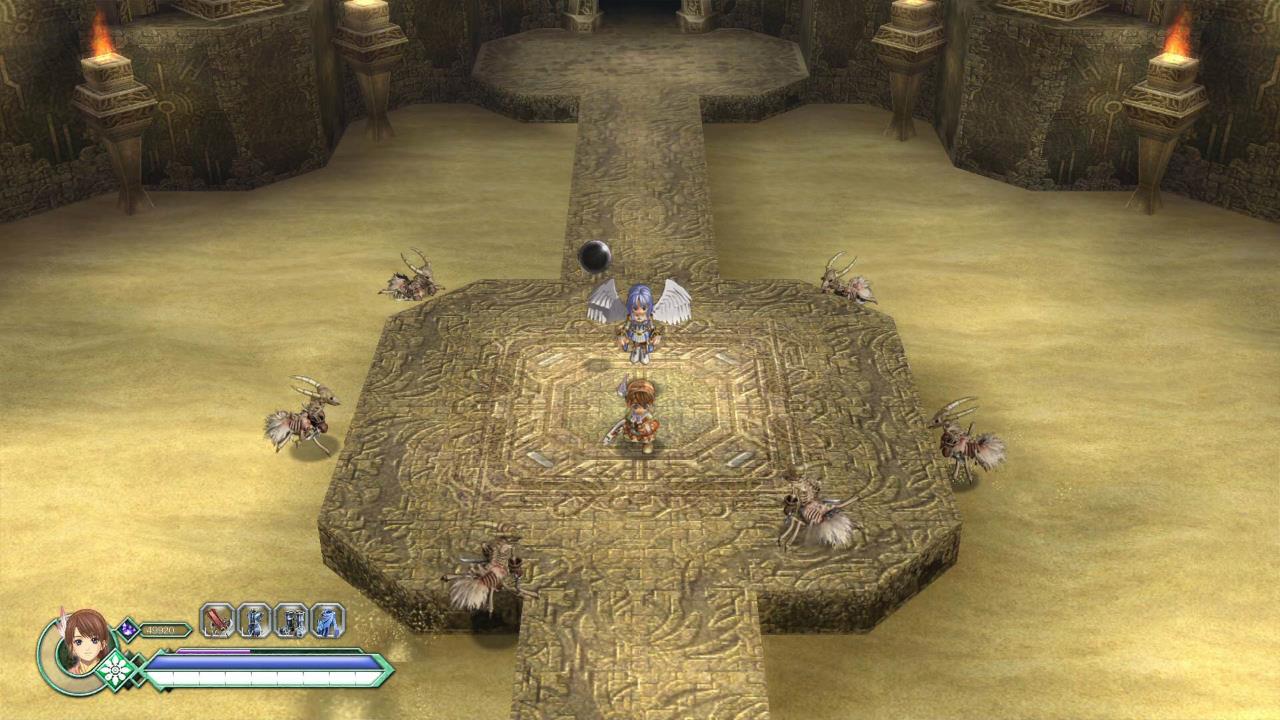 One of the very first boss encounters is a demon that will attack you, then transform into bats and fly around, sometimes chasing you, before stopping somewhere and attacking again, then repeat the process. When the demon is down to around 15 to 20 percent health, it’ll split into two. This normally isn’t bad except that sometimes one demon will be attacking you with a ranged attack while the other is chasing you as a group of bats, and the demon can’t be hurt when it’s transformed. Basically you’re rarely able to get in a hit or two with the bats chasing you. If you’re playing as Yunica it’s worse since you have to attack up close. Another boss battle has you eventually running up the bosses arms to attack its head, but the arms are barely wider than you, so it’s pretty easy to slip off of them and lose time that could be spent lowering its HP.

Difficulty aside, though, there’s a lot to like about Ys Origin. The controls handle pretty well for the most part; for some reason you can’t jump while still in your attack animation, which makes taking out airborne enemies a minor chore. And with each character having different attacks and playstyles it adds some replayability to the game, especially considering some story elements differ between them. The visuals look pretty good for a game initially released in 2006 in Japan. I even find myself stopping for a few moments, on occasion, to listen to the soundtrack. 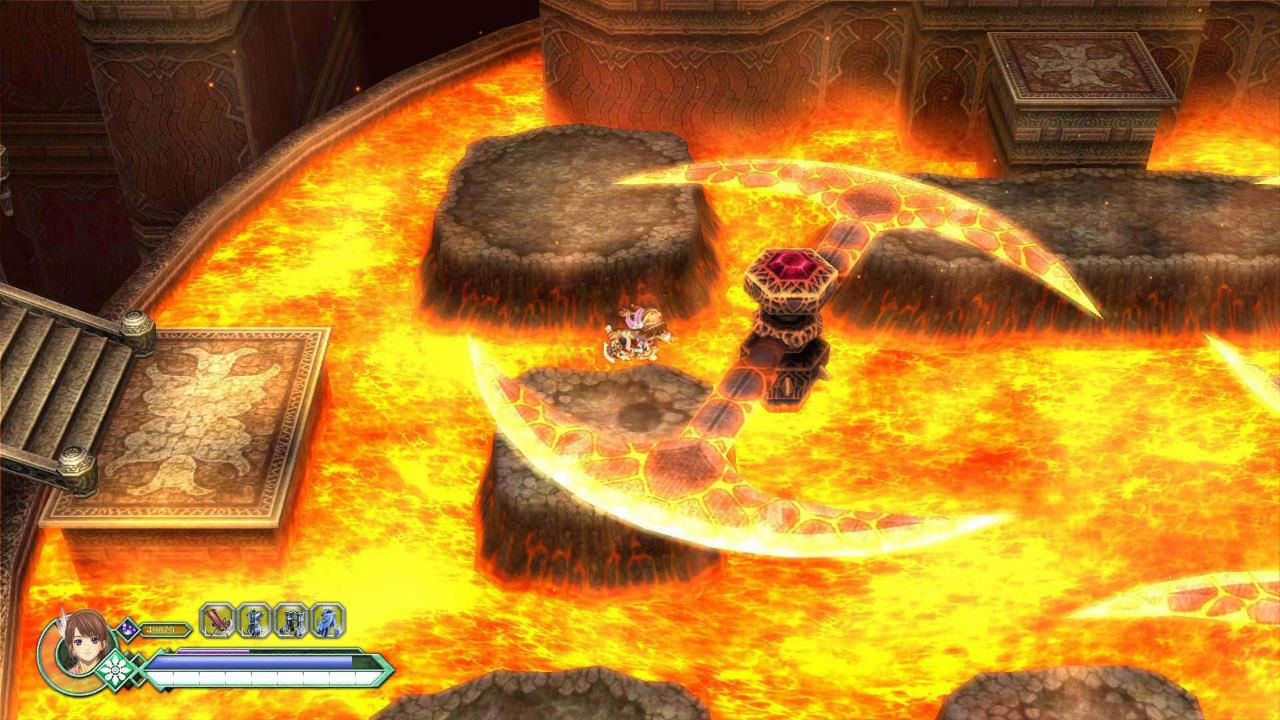 The game also rewards players who explore the tower thoroughly, checking every little nook and cranny with items and armor upgrades they might not have found if they just stayed on the main path. There are a couple of times in which a specific item is required to continue and that item might not be on the main path. But as long as you remember where you have and haven’t been, it shouldn’t be much of an issue to go back and explore the rooms you missed. Though that does lead to another nitpick I have: no in-game map. When you use the crystal to teleport to the other goddess statues you just see a list of the statues you’ve purified to that point. If you want to remember where you have and haven’t been, especially when the later floors of the tower have more branching areas to explore, you’ll probably want to make a map of your own. Or hope you have a really good memory.

Ys Origin is a great entry into the series, especially for those who might have neither played the other games before or couldn’t get the hang of the combat in the originals. Combat in the early games was a lot different, especially the first two games. The ability to warp to any purified goddess statue means you can basically save any time when you’re not in a boss battle, provided you don’t mind trekking back through a bit of the tower again—and you get a seashell at the start you can use to communicate with one of the other search party members to give you a bit of a hint if you get stuck.

While I did have some nitpicks here and there, they didn’t hamper my ability to enjoy the game all that much. When I first played Ys Origin several years ago on PC, it was my first real taste of the series. I enjoyed it so much that I picked up a few more of the games in the series over the past several years. If you’re looking for a way to get into the series, this game might just be your origin point as well.

Ys Origin is a fantastic game and definitely a good way to get into the series itself. The controls feel pretty fluid for the most part. You have several different difficulty options to choose from, so anyone from newcomers to experts can enjoy the game. The visuals still look pretty good today, and the soundtrack is nice to just sit back and listen to. If you're looking for a way to get into the series, Ys Origin is a great place to start.