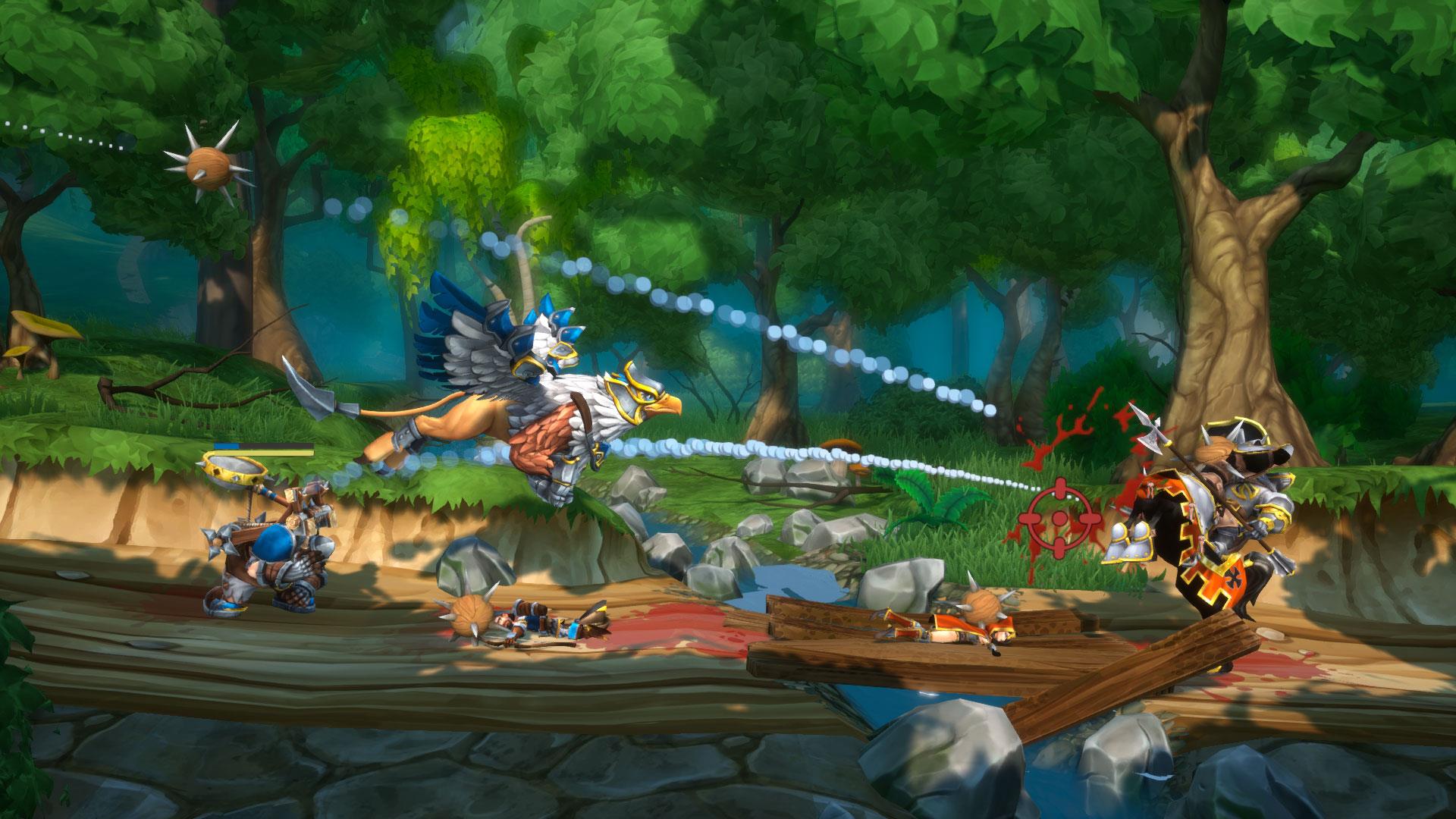 If you ever played through a tower defense game on Addicting Games and wished a developer would scale and augment the concept, well, you’re in luck. CastleStorm II offers a unique blend of turn-based real-time strategy and arcade-style combat with a tower defense element. Plus, compared to its predecessor, CastleStorm II’s visuals and animations are much improved thanks to the upgrade to Unreal Engine 4.

CastleStorm II features two game modes: Campaign and Arcade. At release, we have access to two character campaigns: Sir Gavin’s and Princess Luna’s. However, based on the menu’s bookshelf-like presentation, Zen Studios could easily add more “books” and expand the overall story arch. In Sir Gavin’s campaign, which must be completed to unlock Luna’s, we play as a mildly oblivious but valiant knight. Due to an unexpected cataclysmic event, known as The Great Calamity, depraved creatures and mythical beings now plague society. As Protector of the Realm, we’re responsible for the kingdom’s wellbeing, so we must dispel these enemies and determine the origin of the event. 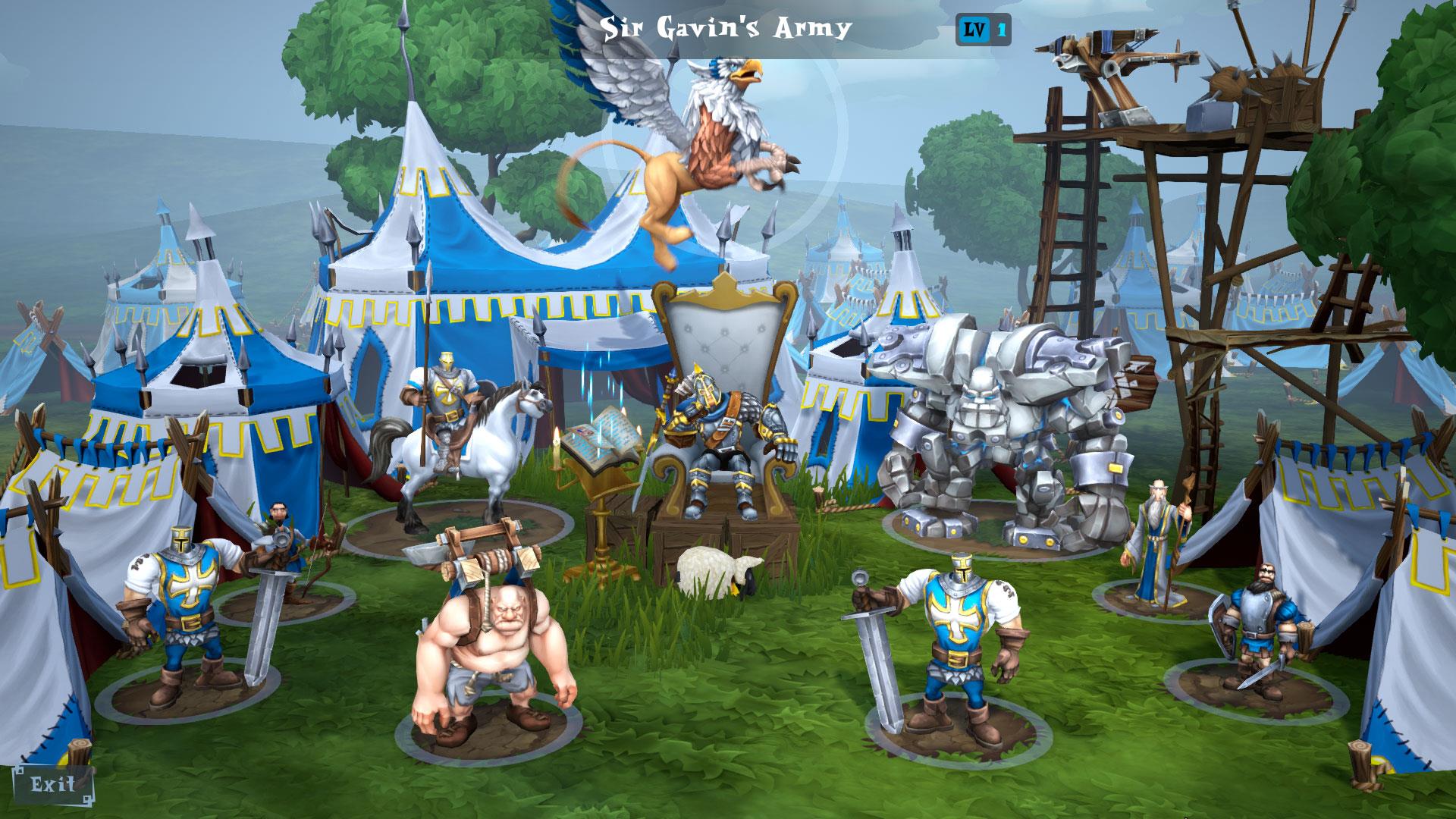 During our travels, we cross paths with a bounty of diverse personalities, such as clueless foot soldiers, Neanderthal rock men, and unrelenting knights. Each character really leans into its archetype, which leads to humorous text-based exchanges with NPCs. The cartoony figures somewhat resemble the leaders within Sid Meir’s Civilization Revolution, except with less fluid character animations.

Although predictable, the storyline is entertaining enough, as it's laced with comedic back-and-forth dialogue. The perfect example occurs when we’re tasked with taxing local villagers. Upon approaching a certain village, we awkwardly fumble through our clearly unwelcome tax request. Appalled by the monetary solicitation (because who openly submits to paying more taxes?), the mayor suggests that we—Sir Gavin, Son of Garth, Router of Rufus, Avenger of Vikings, Protector of the Realm—duel the town champion: Mike. Despite the simple natured name, spoiler alert, Mike is actually an imposing, armor-clad golem. 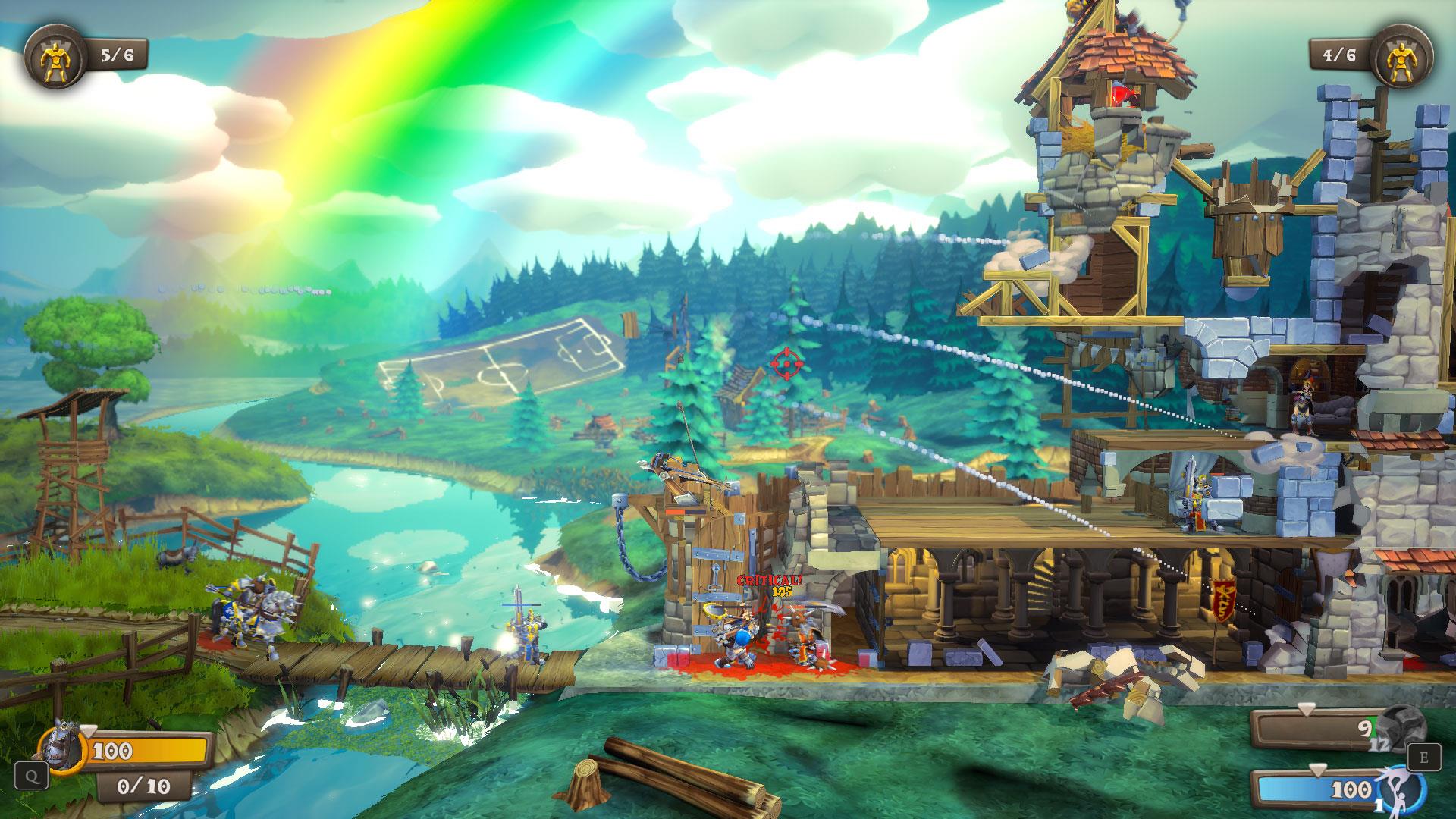 Like any RTS game, we’re compelled to forge the optimal kingdom. Once we construct buildings like farms and gold mines across our domain, they’ll passively gather resources each turn. With enough resources, we can replenish our armies, upgrade existing buildings, and build additional castles, which boost building limitations and expand claimed territory. 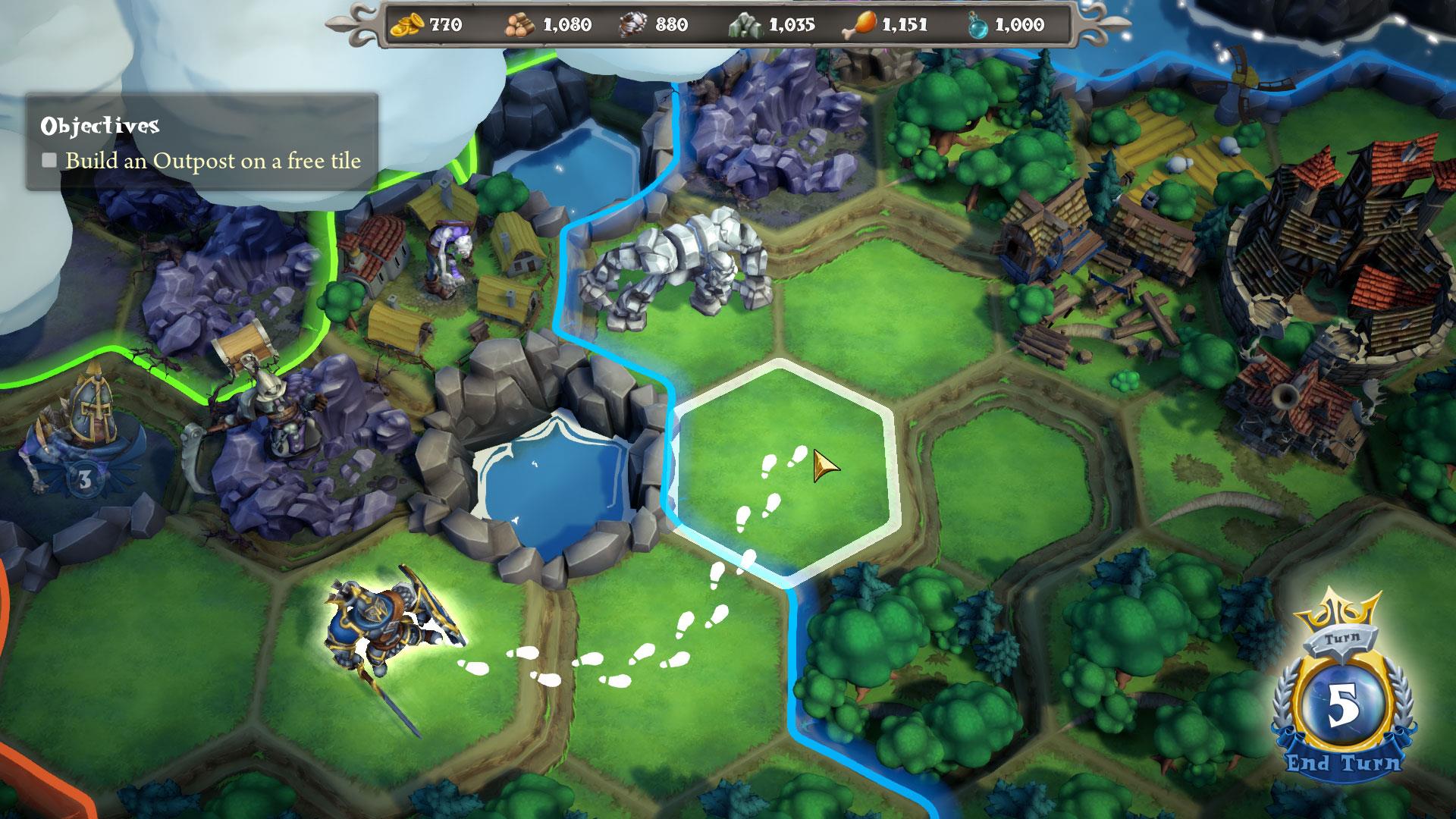 However, unlike most turn-based RTS games, CastleStorm II lets you dive into combat. Combat resembles a classic tower defense in which players man a ballista while NPC forces duke it out on the battlefield. Our ballista has an eccentric inventory of projectiles. There are traditional armaments like javelins, stones, and morningstars, as well as less conventional means like apples and even sheep. Each projectile varies in damage, destruction, and firing rate —so make sure to stock a balanced arsenal in your ballista’s inventory slots. Aiming the ballista is somewhat challenging, as precision and timing are critical, but that’s by design to keep gameplay engaging.

CastleStorm II combat offers an additional twist: players can personally possess their forces in an attempt to turn the tide. While NPCs fight admirably, there’s an obvious difference in combat efficiency if you elect to take over, as you can button mash your way to carnage. Players can also gain a strategic advantage by deploying their hero into battle, but this strategy comes with inherent risk. If your hero dies, you lose the battle. Additonally, taking possession of your troops requires a calculated strategy since you lose the ballista’s aerial coverage. Some combat scenarios can’t be won by simply spamming oncoming enemies with a barrage of javelins, while others necessitate the ballista’s capabilities. It’s a delicate balance. 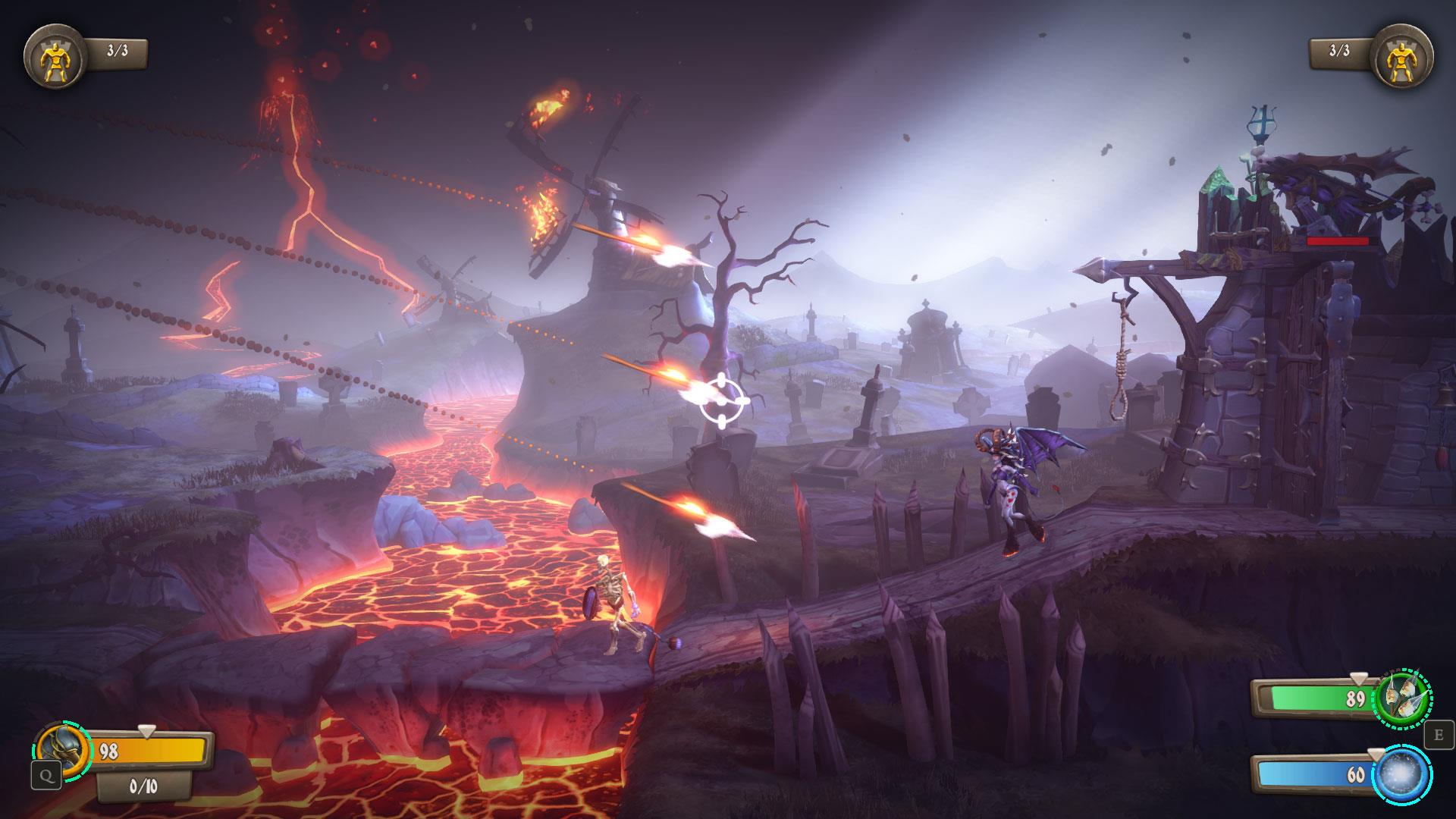 Beyond a strategic dynamic, possessing your forces also offers more diverse gameplay, as each unit has unique attacks and/or support benefits. We have a variety of units at our disposal, such as swordsmen, archers, paladins, sorceresses, and golems to name a few. Each unit has apparent combat specialties. For instance, Paladins have strength and damage advantages compared to other units; however, they’re limited to close-quarter combat. Your hero wields the strongest attacks and abilities, but controlling other units still has its perks. For instance, possessing a powerful unit like the sorceress can be a safer approach to gaining momentum, as you can unleash a flurry of fireballs without the risk of losing the battle upon death.

Battles can and will put a dent in your forces. Consistent army management is critical. It’s quite easy to forget to resupply your projectiles or train more units after combat. On the field of battle, we also possess the ability to use spells, such as lightning strikes and grabbing opponents (effectively instakills). And you can’t do so without a bevy of resources, so prioritize building and upgrading mines, farms, and the like. 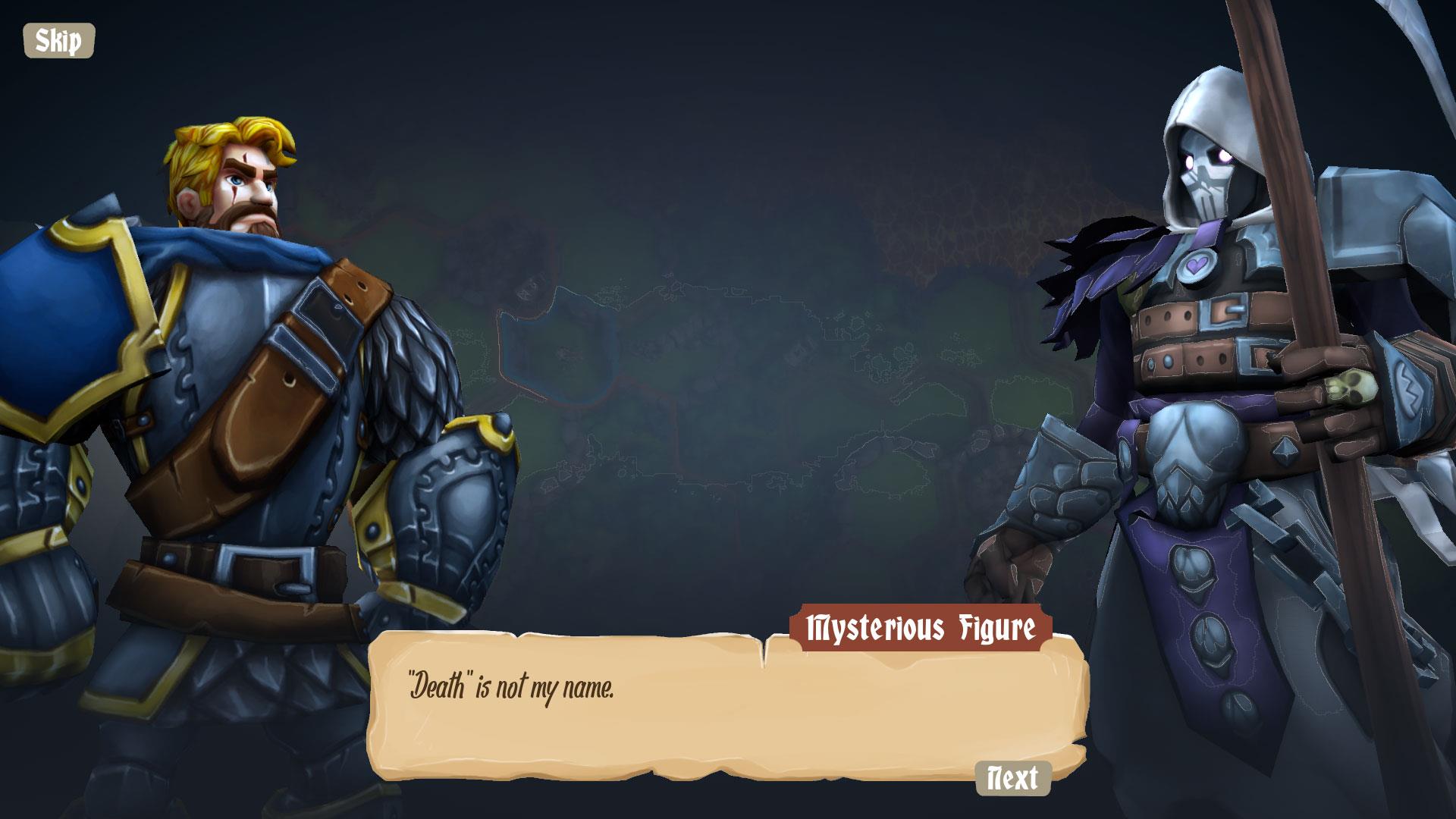 While resource optimization is crucial to fielding a battle-ready army, we’re also charged with maintaining a sufficient reputation. Your kingdom’s people want to feel safe, and they want a winner. Should enemy encampments or rogue marauders encroach on your territory, your reputation will decline. Or, if you lose a battle, your reputation will suffer too. Since we’re also charged with completing objectives while keeping roaming enemies out of our territory, it’s a bit of a juggling routine. But it’s manageable, as mobile enemies only move one tile per turn.

As we traverse the map, we also face the occasional narrative decision. Although these choices don’t dramatically alter the storyline, they add elements of intrigue and entertainment. For example, we can occasionally choose to clear enemy encampments via less violent means. Sometimes, this leads a new commander to join our ranks. Other times, it’s merely a ploy.

If CastleStorm II’s strategy and storyline aren’t your cups of mead, Arcade mode sidesteps these features and lets you jump right into the action. Progressing through a tree of combat scenarios, players can test their combat skills and strategies. Each scenario features unique units, heroes, foes, projectiles, and rotating objectives. One scenario may require you to go toe to toe with another hero or against waves of foes, while another may position you against an entire enemy castle. Arcade mode serves as a viable reprieve from the campaign mode if you’re simply interested in action-packed fighting. The storyline's humor is worth a few laughs and keeps gameplay lighthearted and casual. While the Campaign mode allows for plenty of exploring and expansion, I think a basic skirmish mode would be appealing. And dueling it out with other users or computer-controlled castles would prolong the playability of CastleStorm II.

CastleStorm II's brand of real-time strategy tower defense is just challenging enough to keep you engaged, but not so much that you're throwing your controller.