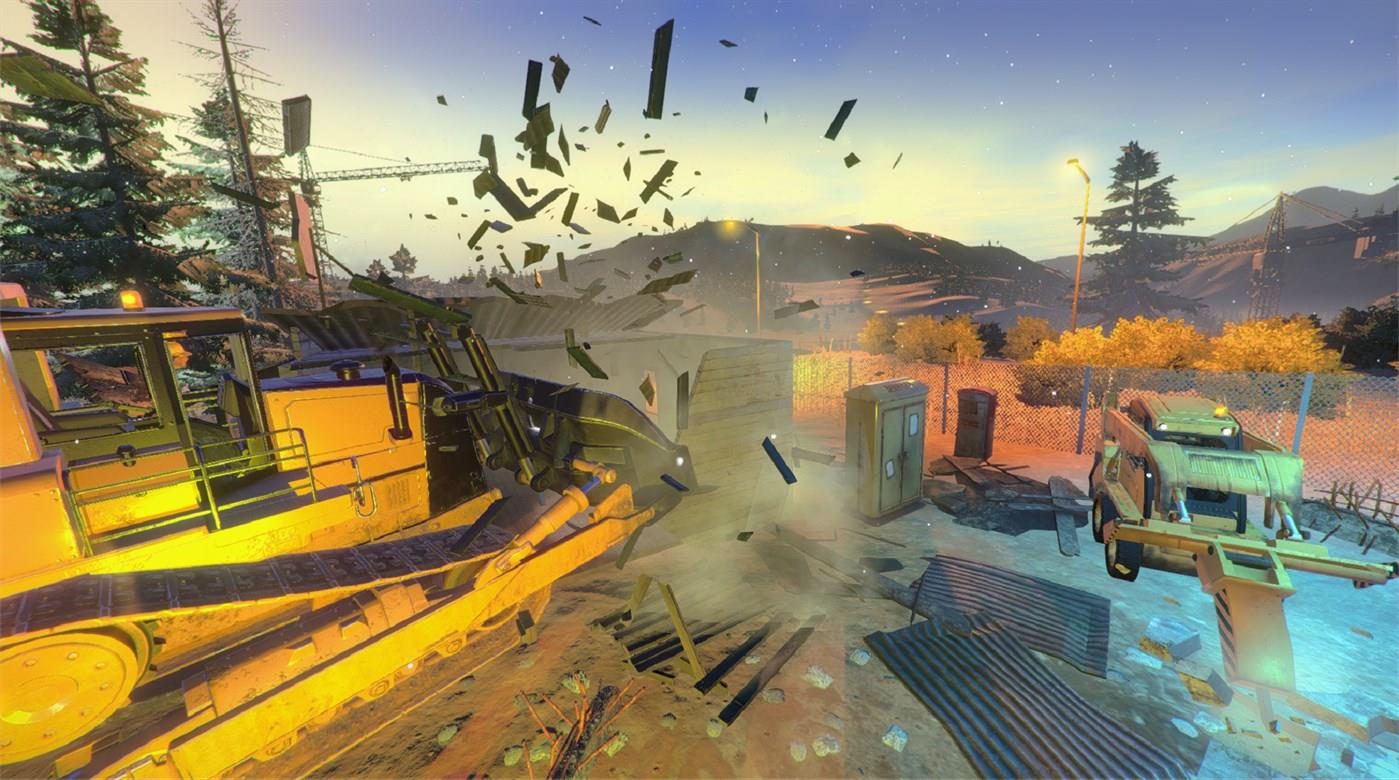 Over the past several months I’ve partaken in a couple of interesting professions. First I tried to build some bridges which went pretty well. For a while. I did go to college for computer programming after all, not architecture. Next up I tried creating little remote-controlled vehicles to perform various tasks. That wasn’t too bad, though a few of my designs ended up being unable to move for some reason. After all of the building I’ve done I figured it was times to get my hands a little more dirty and demolish things that other people created and build some structures as well. That’s right, I’ve decided to start my own construction business. That actually sounded better in my head before I typed it. Still, we’ll see how that plays out for me as I check out Demolish & Build for Xbox One.

Demolish & Build has you running your own construction business where you start with just a hammer, a pickup truck…and that’s about it. The game will guide you through your first couple of tasks, including taking care of a few things inside of a casino being remodeled, followed by clearing out an old office building for you to run your business out of. After that you’re kind of on your own as far as what to do. Ultimately your goal is to make money and there are a few ways to do so, which is nice because you won’t get very far with just a sledge hammer and a pickup truck. 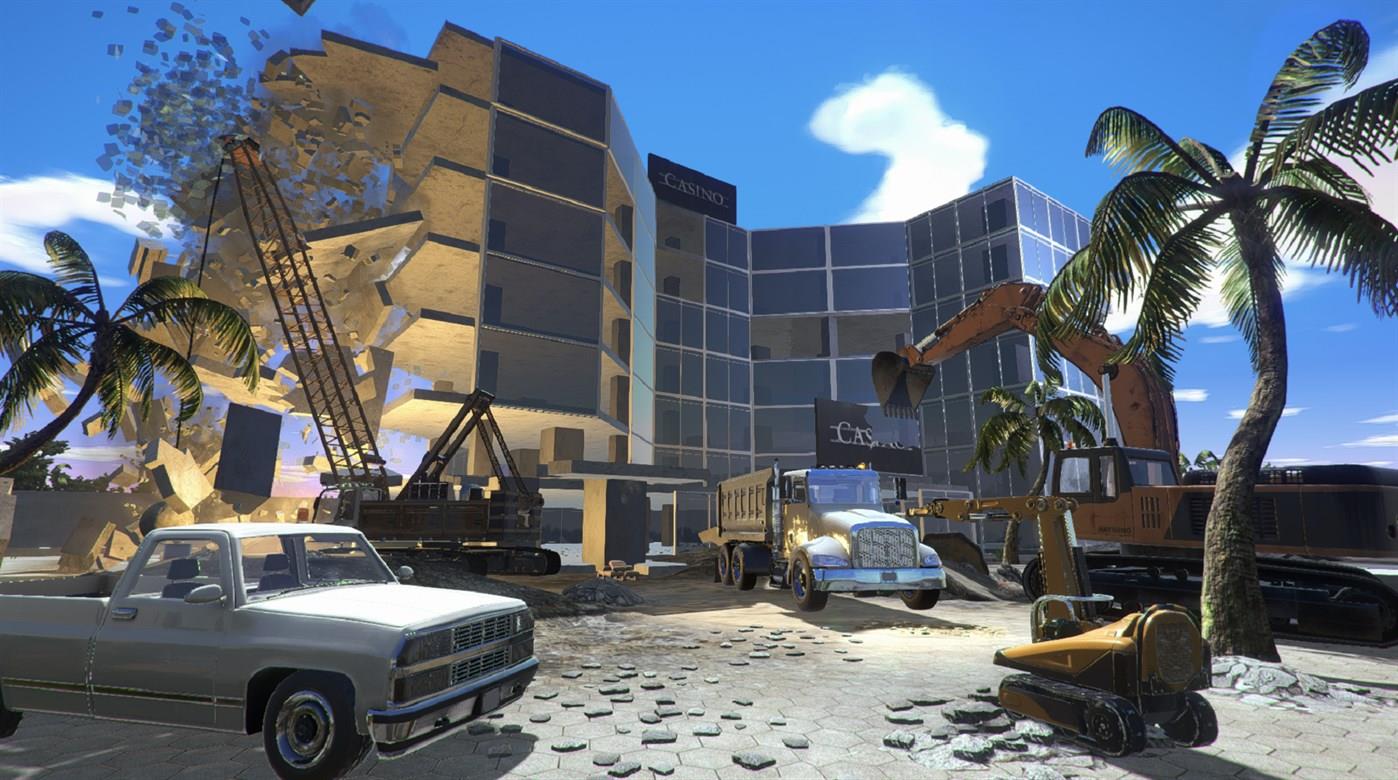 The easiest way to make money is to find some jobs to do from the in-game menu, take care of whatever needs done, collect your payment, and repeat. This is pretty effective and as you make some money you can begin to afford some other tools and construction vehicles which will allow you to take on more jobs. You can also make money by finding various scraps to sell off once you purchase a vehicle that can haul it, and you can find and fix up various lots to use as office buildings and parking lots to expand your business and make a bit more money on the side. However, fixing up a parking lot won’t net you nearly as much as the construction jobs, so the jobs will be your primary source of income for a while.

Since you just have your sledge hammer to start with, jobs at the start will be rather limited. From the in-game menu you can flip over to a list of jobs you can do and each job will list what’s required in terms of tools and vehicles. If you have what’s required you can fast travel to the job location and begin the task at hand. However, it’s not as simple as just smash everything in sight. The jobs will usually have a couple of phases to work through with each phase having a couple of tasks to perform before you can move on. 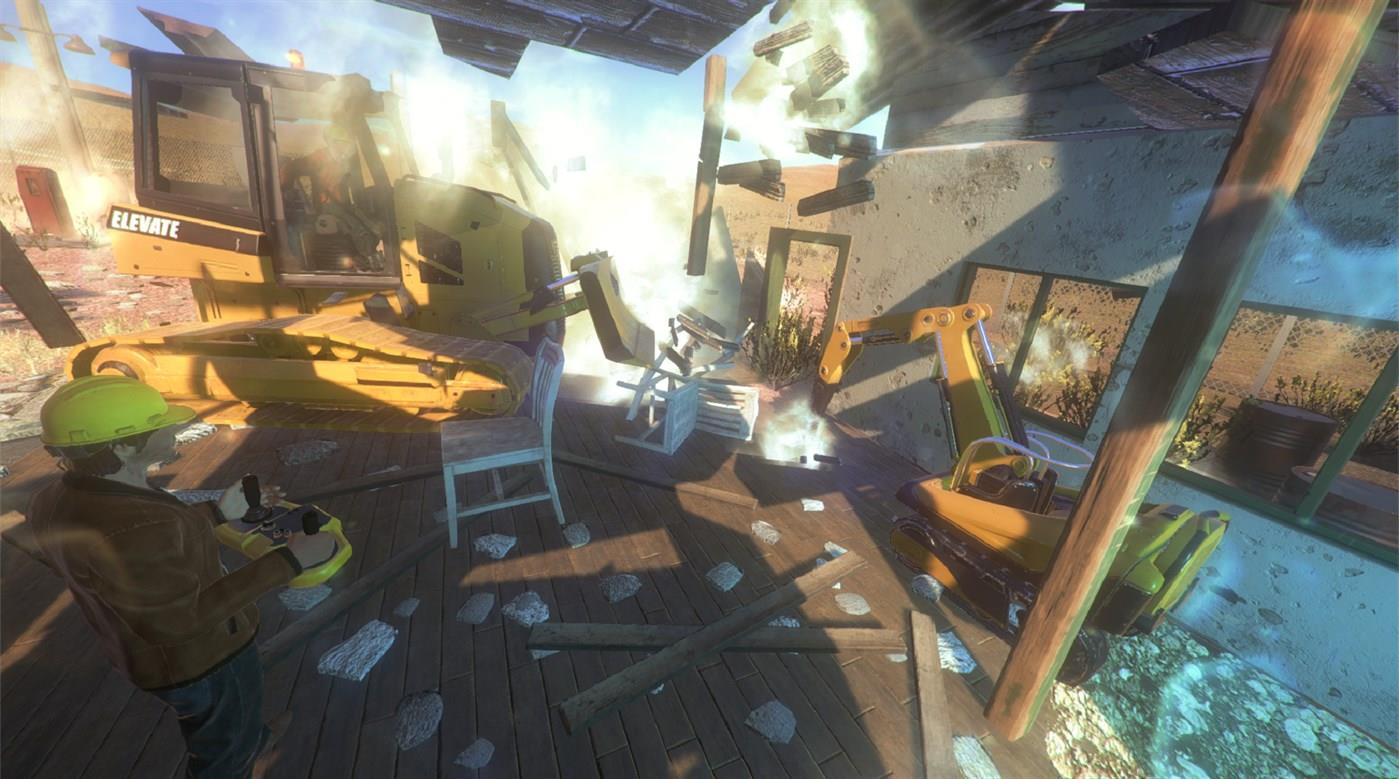 Though I’m not knowledgeable in general about demolishing buildings, I’d imagine that you can’t just take a wrecking ball or bulldozer to it all willy-nilly and call it a day. It makes sense. As such, the first tasks usually consist of removing or smashing things inside of a building, such as removing radiators and placing them in a dumpster, or smashing tables with your hammer. You might also have to pull some electrical cables as well, which is weird since there’s no required tool to do that; I guess you just grab them with your hand and pull? For a few early jobs that’s it. After a while, though, you’ll then have to demolish the building itself. This isn’t quite as easy as it sounds.

When purchasing a new vehicle you have to take a license exam. They won’t just give a nine-ton bulldozer's keys to just any random person. The exams are simple enough, however: just drive through the marked areas and perform whatever task the vehicle is used for and you’re done. So, about actually demolishing buildings. You'd think you could just drive right through things, but not exactly. Even for something as small as a saloon you have to drive through certain parts of it for the building to come down, instead of just plowing right into it through the center. 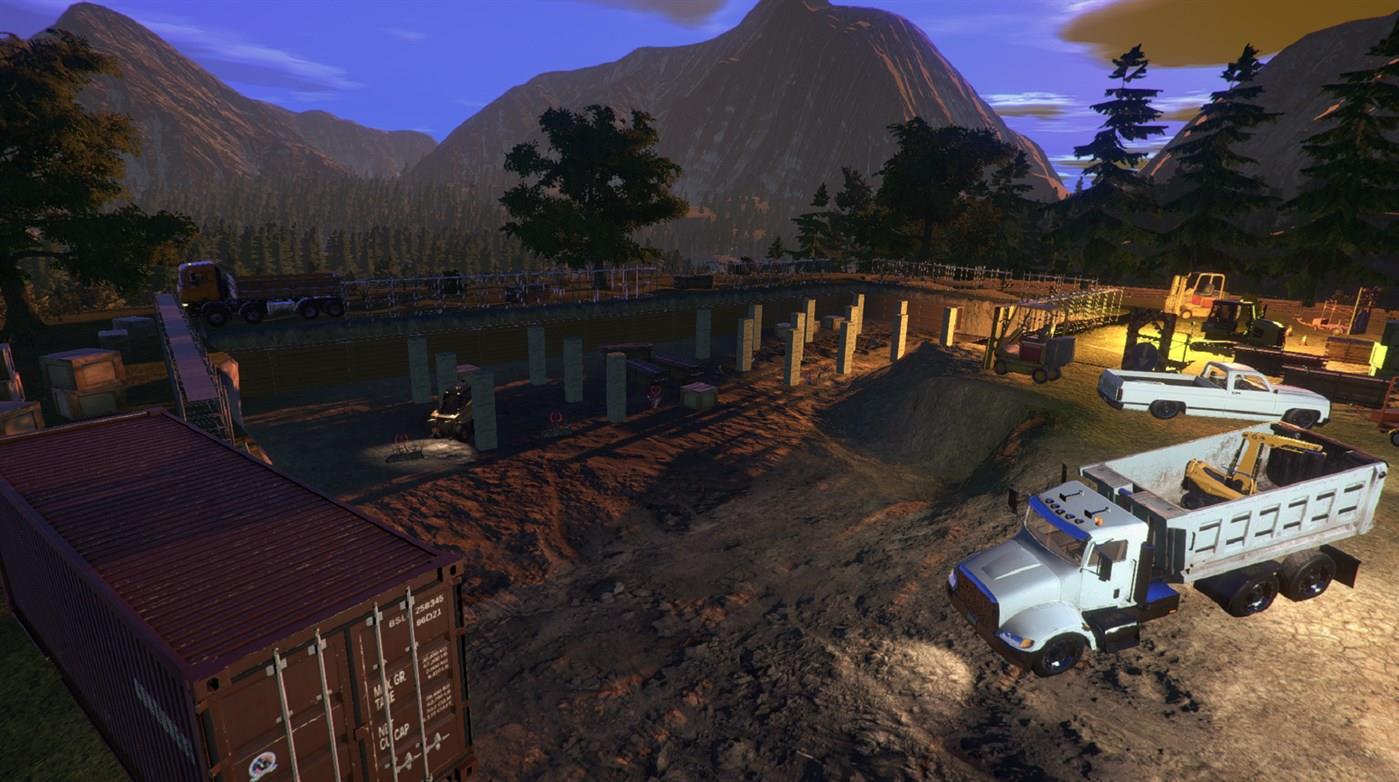 Again, not a demolition expert, but this does make sense. Otherwise the building would just come crashing down on your head. This does make some jobs rather tedious and sometimes the goal amounts are inconsistent. You might have to destroy some walls, but not all of them. Anything beyond what’s required by the game is just bonus cash for your company. Smashing sinks and toilets though? You better make sure every piece or porcelain has vanished from existence before the game will let you proceed.

As the game progresses you can hire workers, mine ore, and scrap metal, haul lumber, and build stuff, hence the “Build” part of Demolish & Build. Once your company has reached a certain rank you can use the Airport to travel around to build your company even more. This does take some time though, so you better get used to doing the same menial jobs for a while. The good news about that is that doing a lot of easier jobs can build up your cash supply quickly so you can buy the tools and machinery you need for tougher jobs. Basically within a couple of hours you can buy almost everything. The tools aren’t too expensive, but make sure to only buy the machinery that you need for available jobs as they will cost you a pretty penny. You also have to maintain your machinery and make sure it has gas (this goes for your pickup truck as well which you start the game off with). 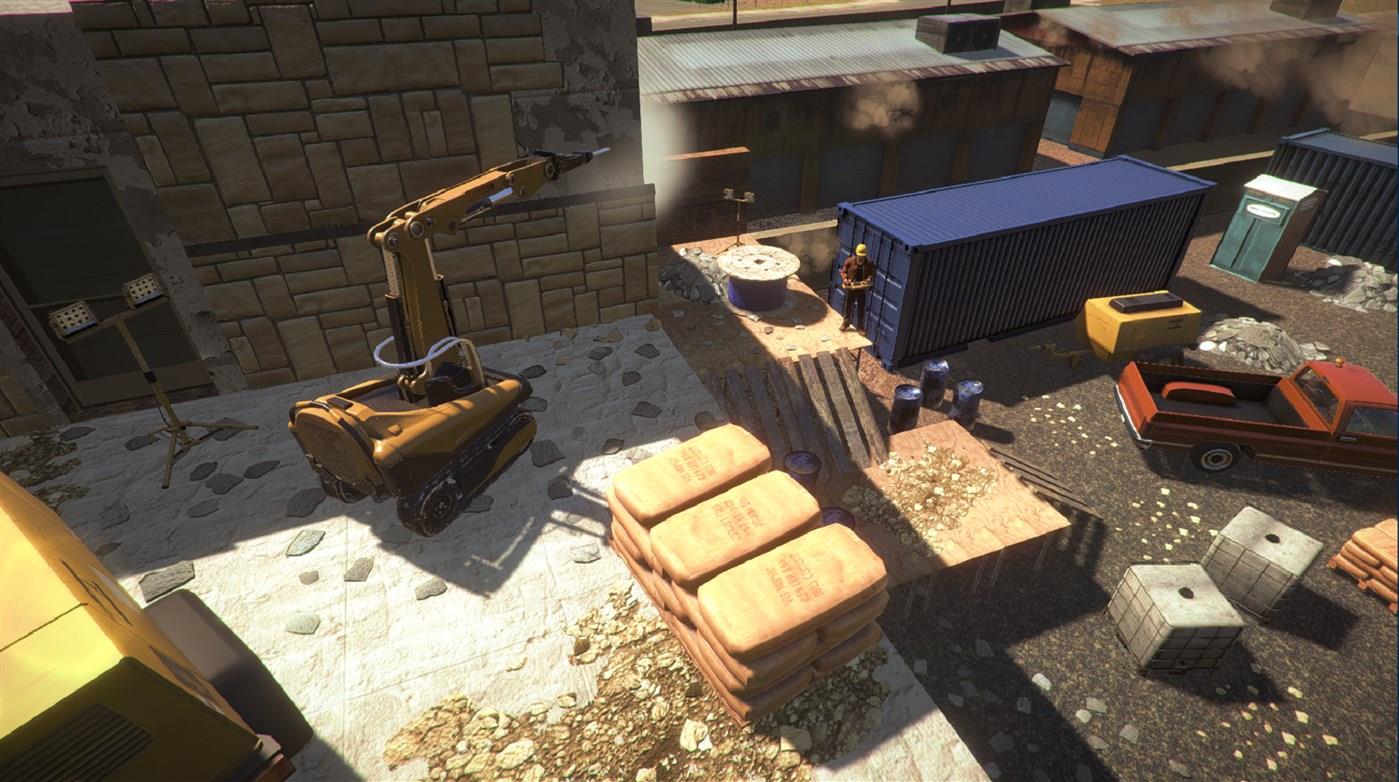 When I first started Demolish & Build I was a bit skeptical. The loading times at the start and going into and out of jobs can get a bit lengthy at times. Which seems a bit weird once you get into the game because the graphics are nothing special. They’re not terrible but they’re also not anything I’d expect from the Xbox One. Movement can be a bit clunky and slippery at times which can cause some problems when you’re trying to take care of smaller targets, such as taking objects to a container or smashing out smaller windows. It’s very easy to keep moving slightly back and forth to line up with a window for your hammer to smash it. The vehicle movement can also get questionable as I’ve had my bulldozer get stuck going down a hill with seemingly nothing in front of it. The license exams for the machinery also doesn’t necessarily tell you how certain functions work: the excavation machine has a bit of complex functionality to it and I had to figure it out on my own. It’s not difficult, but we are talking a huge piece of machinery that can destroy buildings, provided the current task says I can. An instruction manual would be nice.

In the end, I can’t be too hard on Demolish & Build. It’s a simulation game where you start a construction business from the ground up, buy the tools and machines you need, hire some help, make some money, and expand your business. From a gameplay standpoint it’s clunky, but enjoyable. Graphically and audibly speaking it’s nothing special, per se, but it’s not bad either. The beginning can get pretty monotonous with the early jobs, especially when you start to wonder if the only businesses in the town are saloons and gas stations. For 20 dollars it’s good and I’d say it’s worth checking out. Besides, you get to tear down buildings, smash up walls, and take radiators out to the dumpster. What more could you ask for?

Demolish and Build is enjoyable once you get a ways into it, but the early going can get pretty repetitive once you've gutted your second saloon and third gas station. Overall, though, it has a bit of a charm to it as you try to improve your company's rank and expand your business.