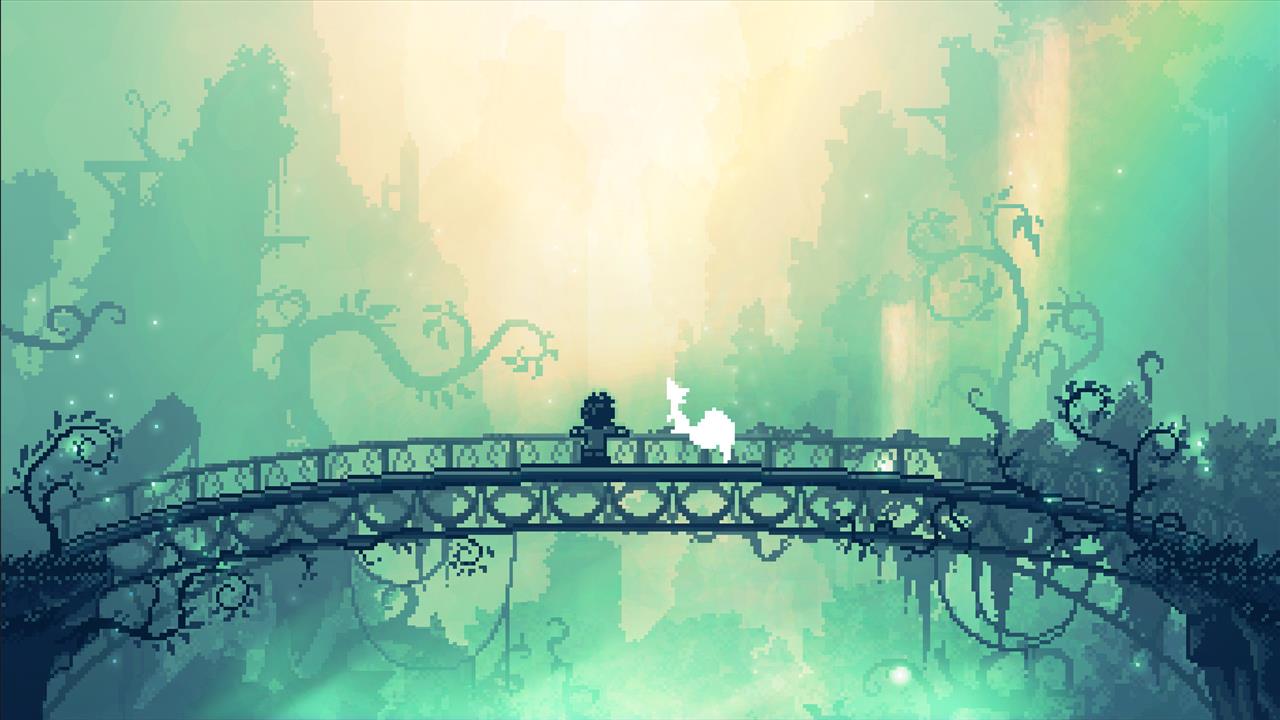 I wasn’t emotionally prepared for Inmost. It sounds strange to say that about a pixel-art puzzle-platformer. I normally don’t get terribly emotionally involved in games—particularly games that use artful but not overly realistic graphical styles. But finishing Inmost early on a Sunday morning, I found my guts all twisted up, my back hunched over, and my heart beating perhaps a tad too hard.

Maybe I’ve been feeling a little overemotional lately. I don’t know if you’ve noticed, but times are a little trying right now. And of course, I’ve been considering how to better spend time with the family that I am isolated with during this strange, dreamlike period in our history. So it is possible that under these circumstances, Inmost’s tale of love, loss, grief, and madness hit me a little harder than it would have otherwise. But that doesn’t diminish the impact this game had on me. Sometimes you experience a piece of art at just the right moment for it to feel like it is speaking directly to you. Inmost caught me at peak vulnerability. 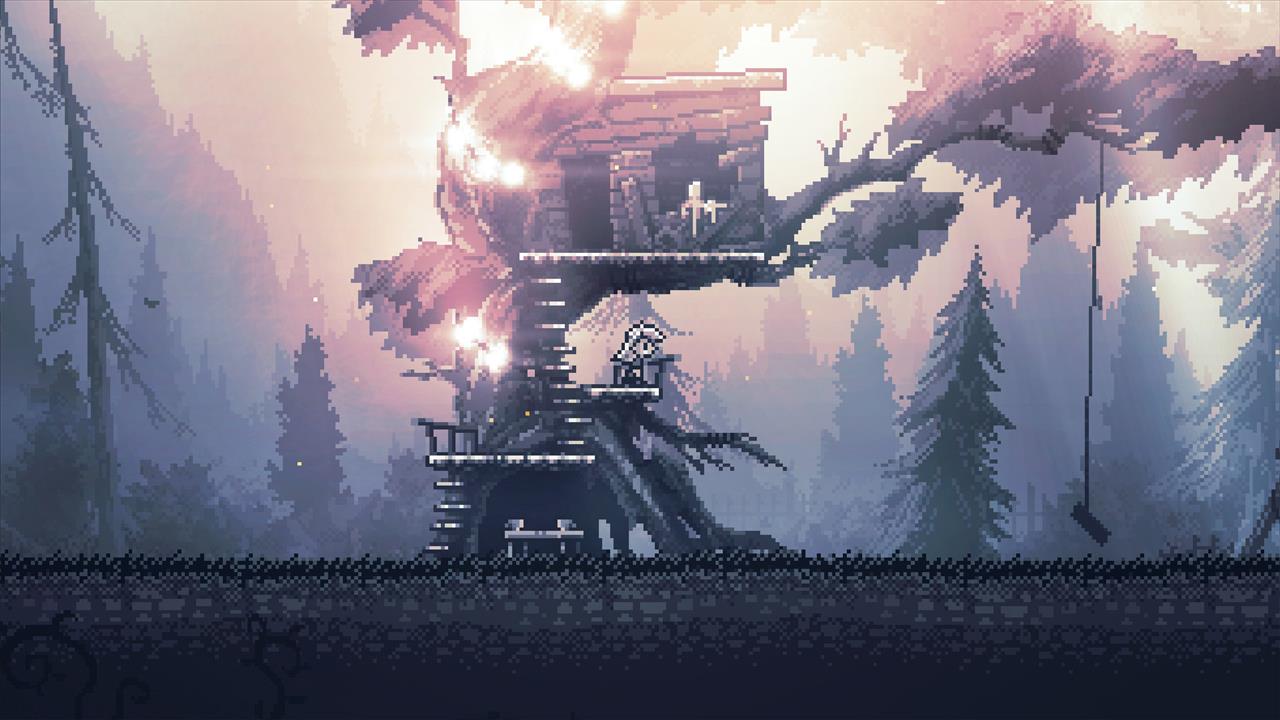 For most of Inmost’s play time, I was wondering what the hell was going on with the story. The game reminded me in some ways of the film Jacob’s Ladder; the structure never quite revealing itself—a puzzle within a puzzle. The viewer/player spends the majority of the runtime being aptly entertained, while becoming more and more confused as to what is actually happening in the story. Then, in the final moments, everything slams into place like a weight dropping onto your chest.

I won’t reveal my thoughts on what was really happening in Inmost (there are some fine Reddit threads for that discussion). But I will say that I was wildly off base with my interpretation for a fair chunk of the game. Inmost is one of the few games in recent memory that uses red herrings to throw the player off the trail of the true story. For me, that misdirection worked, and I dragged myself down a very false trail of narrative. This allowed the true nature of the story, when it finally hit, to smack me upside the head. 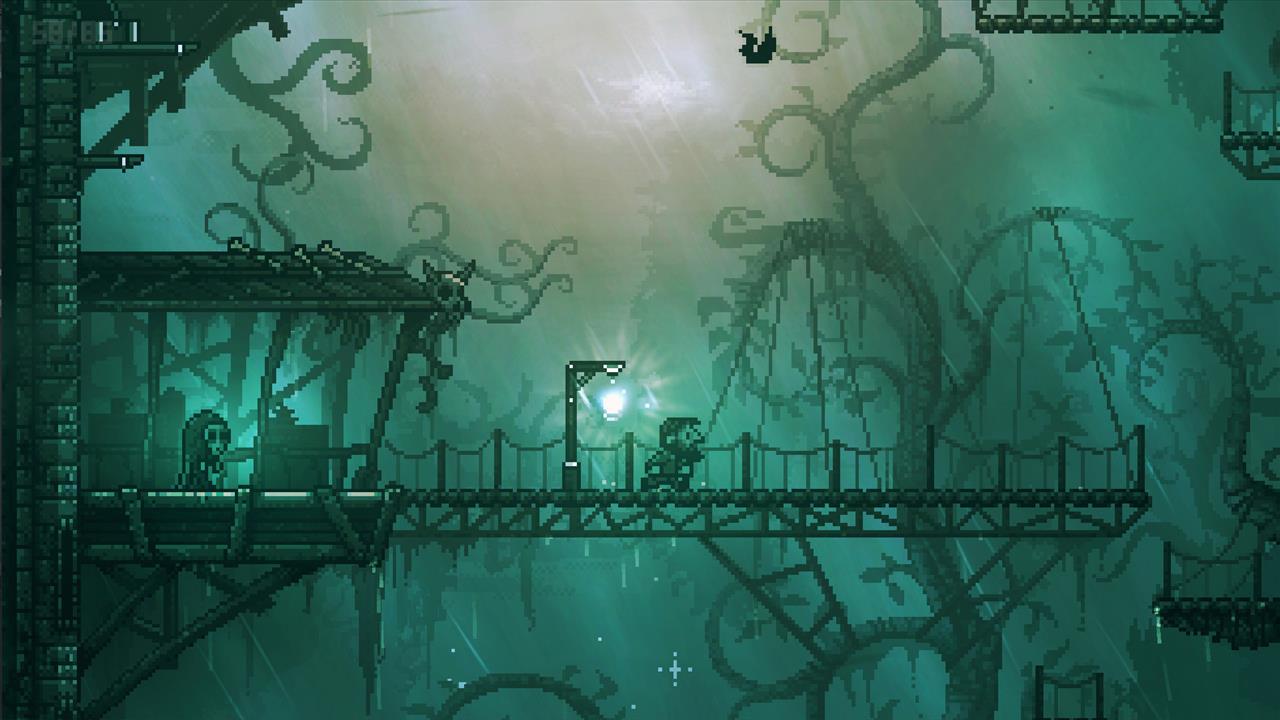 Inmost plays like three separate games combined into one. Though the games share an art style, they play and feel quite differently from one another. Everything is depicted in a monochromatic pixel art style: lovingly crafted and animated to be at once both beautiful and oppressive. Occasional splashes of color bring the player’s attention to specific items, but even they seem somewhat subdued by the pall hanging over the entire game. The basic art style communicates a ton of detail, and clever use of sound effects lend weight and heft to objects in the game.

I must also give a great deal of credit for Inmost’s overall oppressive atmosphere to its soundtrack. Never obtrusive, the soundtrack nonetheless makes itself known with crashing organs, gently pulsing rhythms, and outright horror beats. It is stellar work, particularly when you consider that it was originally composed for a mobile game. Inmost goes above and beyond the call of duty in this department. 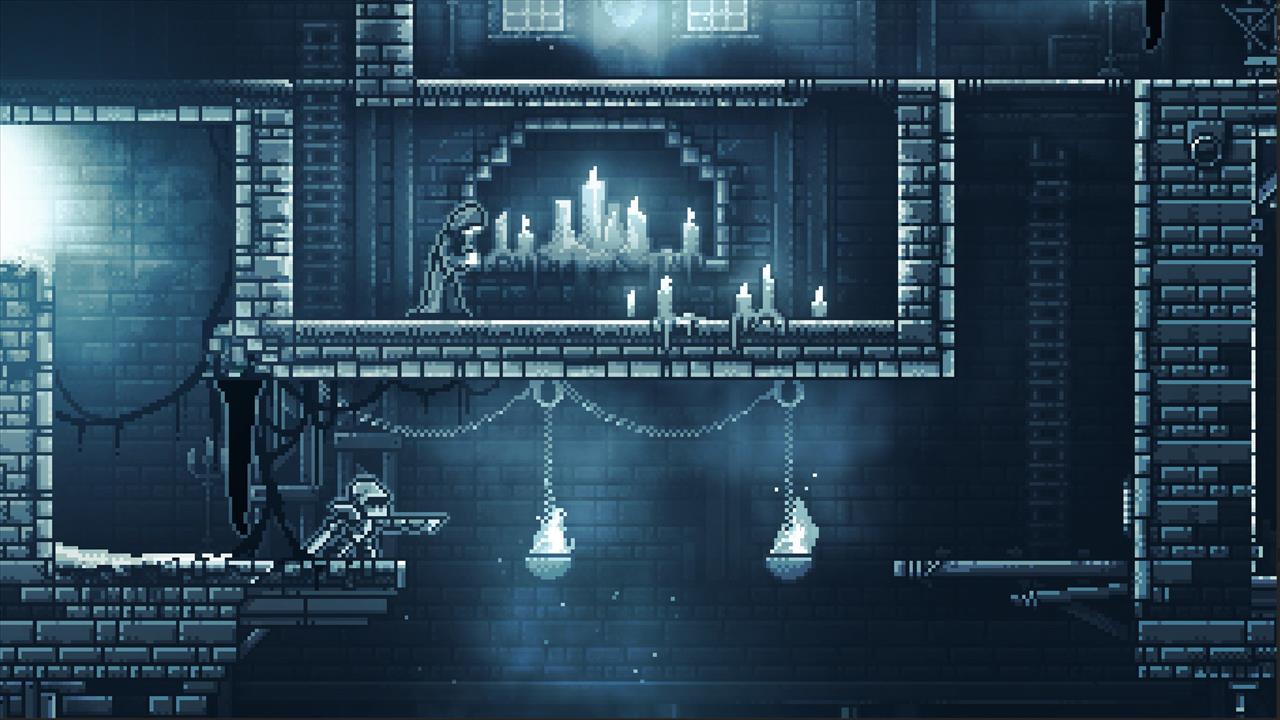 Inmost’s primary story thread involves a nameless man exploring a castle and the surrounding landscape. The man’s identity and motivations are obscured from the player, but he does seem to be a decent sort. The man silently helps those with whom he comes into contact, though he does sometimes accidentally cause more harm than good. These gameplay sections, which make up the bulk of the game, consist of puzzle platforming: flipping switches, pulling pins, pushing platforms and the like in order to progress.

Though this primary character does encounter enemies, he does not have much in the way of combat skills. Instead, he relies on quick wits and a variety of acquired tools to navigate the environment and avoid baddies. Inmost is rather forgiving when you do make a misstep. Falling to your doom or taking too many hits results in an instant restart, very close to where you died. This is a game that wants you to continue forward, and though the puzzles sometimes stumped me for a few minutes, a bit of exploration in the immediate area usually illuminated a way forward. 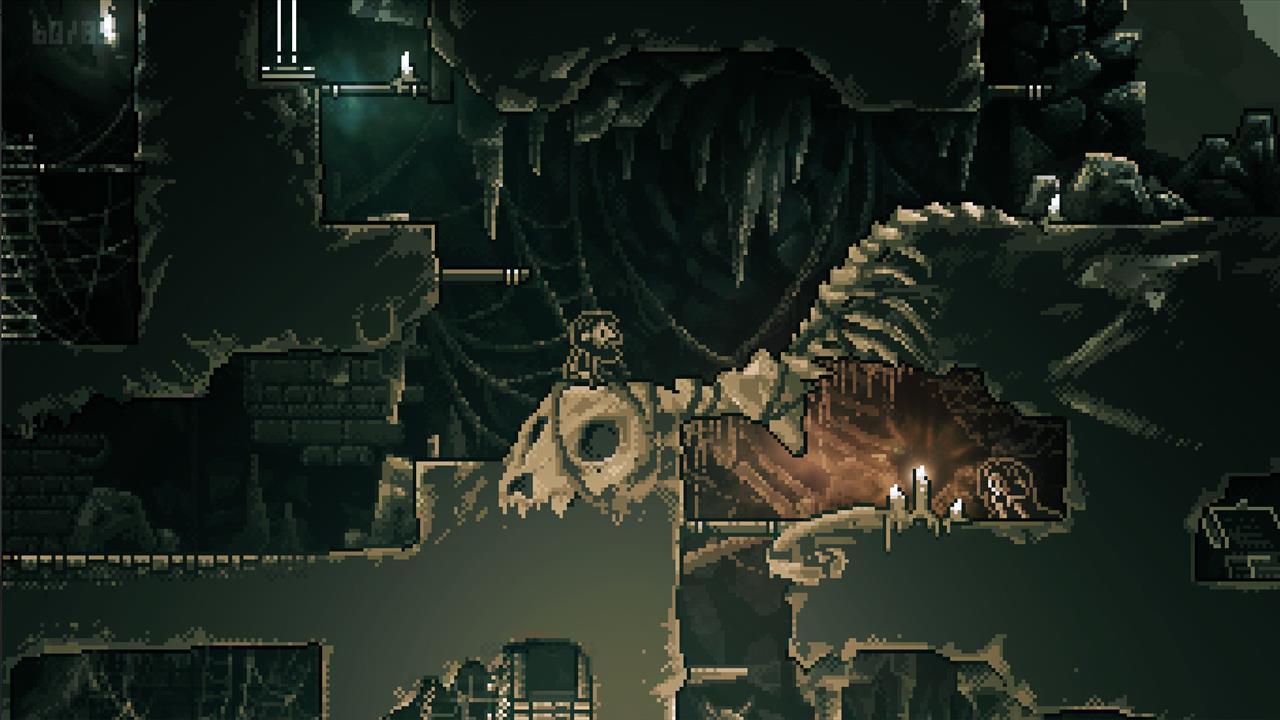 Another portion of the game, which cuts liberally between its intermingling storylines, involves a knight of ambiguous morality. This guy hacks, slashes, and hookshots his way around a castle, dispatching enemies with his sword while zipping around the map. These portions of the game are very reminiscent of Castlevania-style action platformers, requiring a bit of skill and some pattern memorization to get past certain recurring enemies.

Though the knight’s sections are more narratively coherent than those of the primary character, they are still awash in dark fantasy symbolism. It is quickly revealed that the knight is not exactly a good guy, and if would be a spoiler to reveal what he is actually doing—if I were 100 percent confident in my interpretation of the symbolism at play.

The last story thread involves a young girl locked in a lonely house, her primary companion being a talking stuffed rabbit. The gameplay for these sections are akin to a basic adventure game. There are a few very simple puzzles, most involving pushing around objects to reach higher areas, or finding keys hidden in the house. But these sections are simple enough that a child could easily work through them, which is likely the point.

Much more intriguing in the little girl’s sections are the story elements that come into play. Who is this child, and who are the adults that sometimes share the space she occupies? Why do they sometimes seem so hostile, forcing her to creep around unheard? Why does her stuffed bunny sometimes spew incredibly adult language? With the other story sections seemingly floating in fairy tale and symbolic imagery, this is the section of the game that feels the most grounded—and therefore the most disturbing. 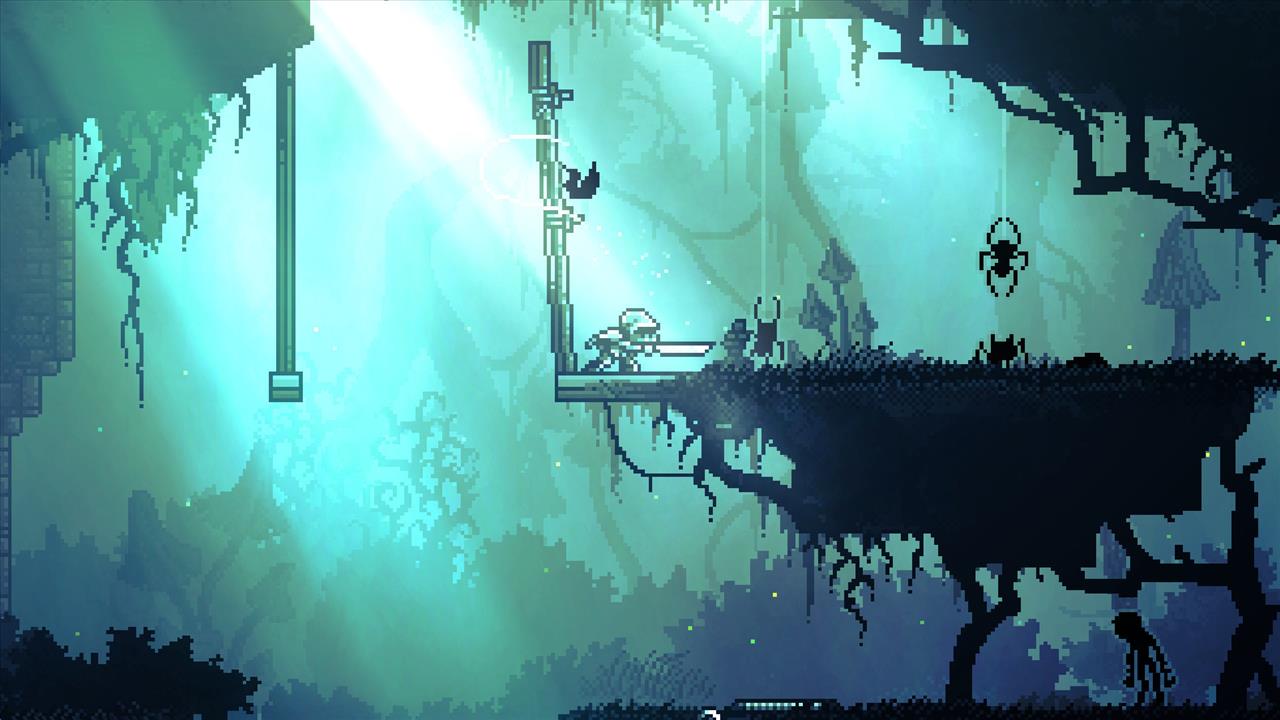 It is clear from the outset that these three gameplay sections will eventually coalesce into one central narrative. I was deeply surprised at how interested I was in seeing that resolution play out when the time came. After spending the majority of my five-hour playthrough wondering what in the world was happening, seeing everything come together at the end was deeply satisfying.

The conclusion of Inmost immediately plunged me deep into contemplation, trying to figure out how everything fit together and what it all meant. What did the various story moments mean in the context of the overall narrative? What did different characters and events symbolize? And what was up with that kid in the cupboard at the beginning of the game? This is the sort of game that English majors will love discussing over a beer.

The last 15 minutes or so play out in an extended cutscene, with very little input from the player. But by that point, I was so engaged in the story that I was less interested in interacting. I just wanted to see what happened. Still, I imagine that some players will feel a bit put out by having control wrested from them in favor of delivering a filmic conclusion.

I had a few other quibbles with Inmost, mostly involving the controls. Inmost is a refugee from the Apple Arcade, and though the transition to Switch is mostly successful, I sometimes had a hard time getting the characters to behave exactly as I wanted them too. Sometimes my jumps were interpreted as climbing, or my attempts to use my weapon/tools would not perform as expected. Nothing deal-breaking, but a little frustrating. I also had a few problems with the primary character’s exploration sections. With very little indication on where to go next, I found myself wandering around quite a bit, trying to figure out where to go to continue pushing the story forward. A map function would have been very welcome. 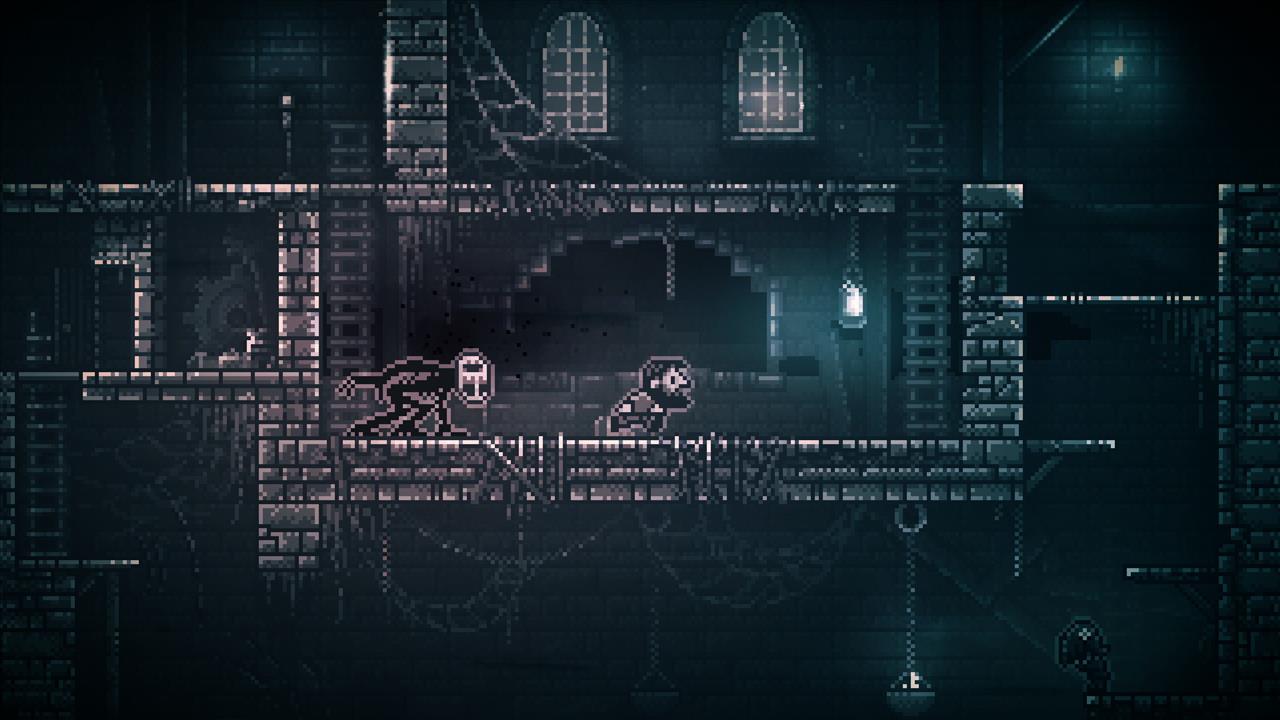 But none of that really matters all that much, given the overall quality experience offered by Inmost. Many games attempt to construct emotionally resonant narratives, but very few succeed. For me at least, Inmost delivered a gut punch of the sort I can’t recall ever feeling while playing a game.

Inmost delivers a variety of gameplay styles, delivering three thoughtfully discordant narratives that tie together with a gut punch at the end. Beautifully constructed pixel-art graphics set a surprisingly somber tone, and the music is top notch at setting the horrific yet contemplative mood. Recommended.