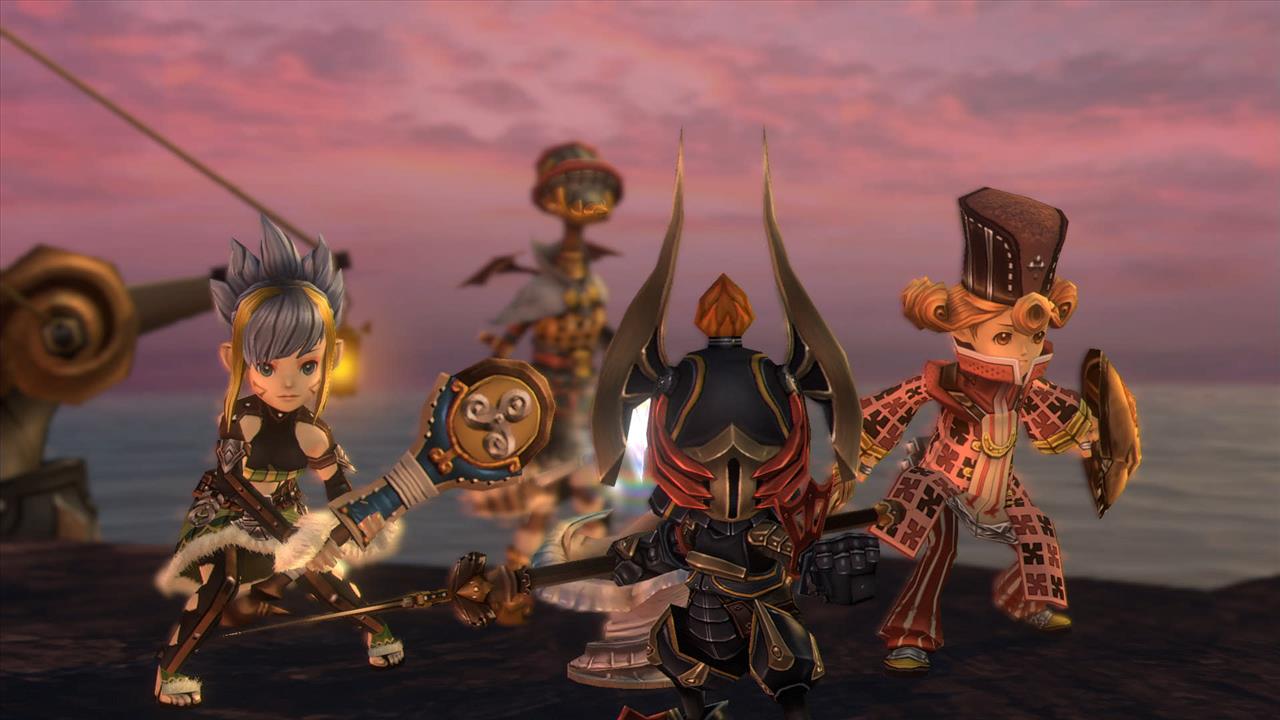 My first impressions of Final Fantasy Crystal Chronicles Remastered Edition were cautiously positive. I’d never played the original version back in the GameCube days: my family simply didn’t have enough GameBoys to pull it off and I didn’t have any gamer friends beyond the ones that I spawned and molded. But I was curious to see what all the fuss was about now. I booted up the game a few days before its general release, and settled down to learn the ropes in single player.

I quickly discovered that playing Final Fantasy by myself, as a 48-year-old life-long gamer, feels a little like sitting down with some brightly colored children’s blocks. Sure, I can amuse myself for a while building little structures, but eventually I’m going to require more complexity and function. I need LEGO. In gaming terms, I need more systems than Crystal Chronicles offers to keep myself amused for an extended period of time. The whole game—played solo—just feels kinda simple. 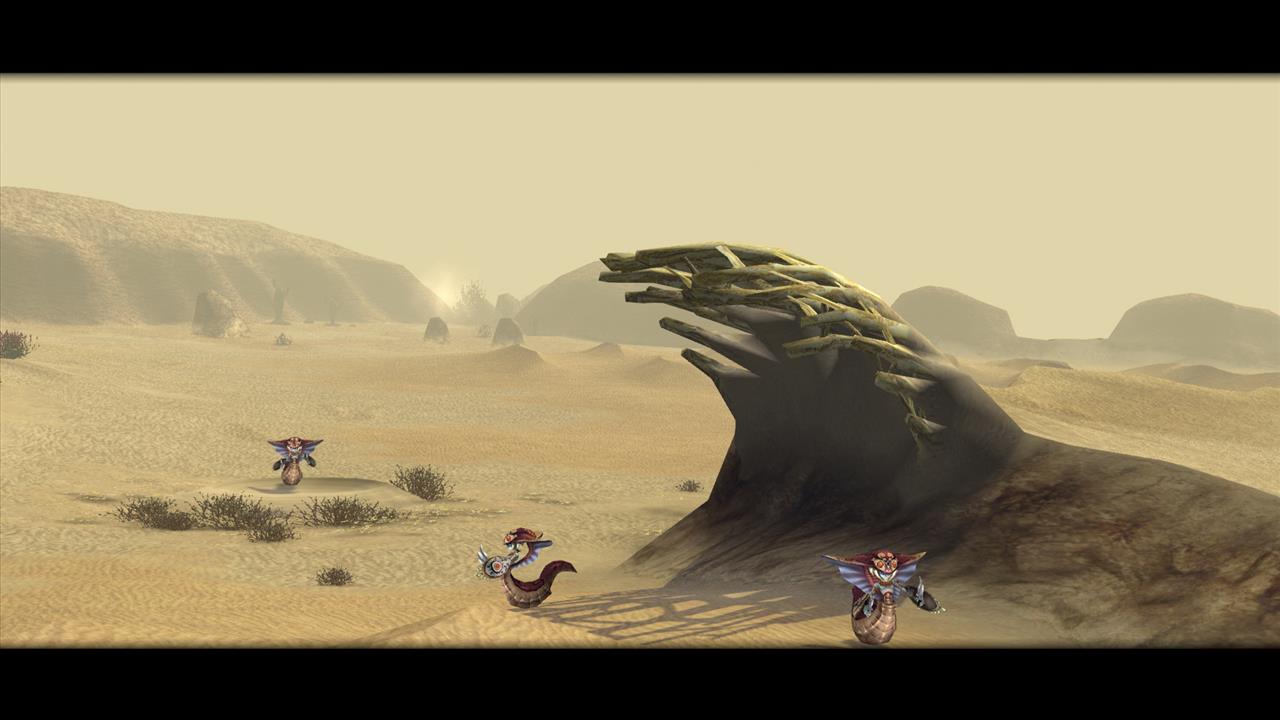 Simple or not, it did take me a few minutes to figure out what the game’s structure was, after suffering through the four-minute non-skippable cutscene, that is. Players create a character from a simple set of archetypes. There are four races available, each of which has a slightly different power set. You can also choose a starting profession for your characters, but I was unable to ascertain what difference professions make beyond a slightly different opening cut scene.

You can have up to eight characters, which I’m sure is a relic left from the GameCube days, when everyone could play on one screen together. Though the game doesn’t tell you this, you will never play with more than one of these characters at a time, so there is no need to build out an army. In multiplayer, everyone brings their own single characters to the table, so you might as well just pick one or two.

Your character starts out in a small town, preparing for a journey. It seems that the world is afflicted by “miasma,” a strange poisonous gas. Too much time spent in miasma’s presence is deadly, so every settlement is built around a giant crystal, which keeps the miasma at bay. The crystal is powered by “myrrh,” a liquid only found out in the wild by adventurers. Your job is to venture out into the world, conquer dungeons, grab myrrh, and bring it back to keep the crystal powered. 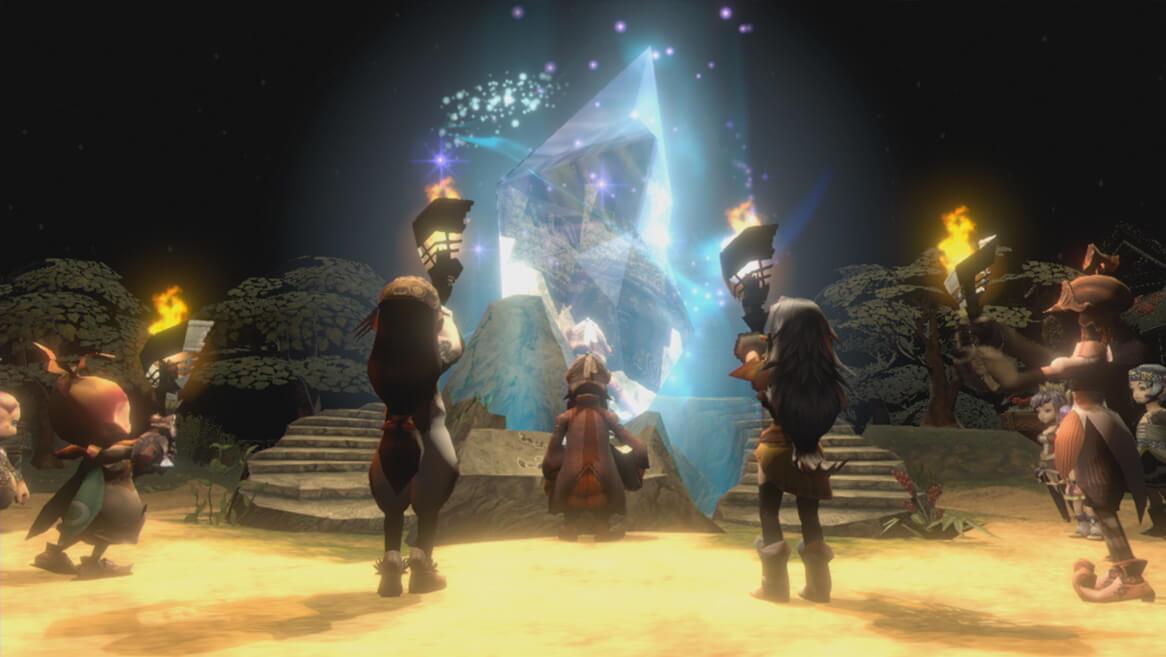 In practical terms, this means that your sad little caravan of one wanders around a simple world map. Your moves are carefully regulated; you can’t go off the rails even slightly. You dip into dungeons when you find them to collect the myrrh within. In between, you stop by settlements for chats, and are frequently subjected to cutscenes that take place on the open road. There is some storytelling involved here, but mostly I found the load times before and after the cutscenes to be not worth the nuggets of narrative they deliver.

In dungeons, Crystal Chronicles shows its true weirdness. I’ll give it to Square Enix: the company certainly isn’t afraid to try out some seriously strange game mechanics. The player character carries along a chalice, ostensibly to collect myrrh. In game terms, this chalice pushes back the incursion of miasma, meaning that players must stay within a certain range of the chalice or they will start dying. This means that you have to schlep this damn thing along with you everywhere you go. 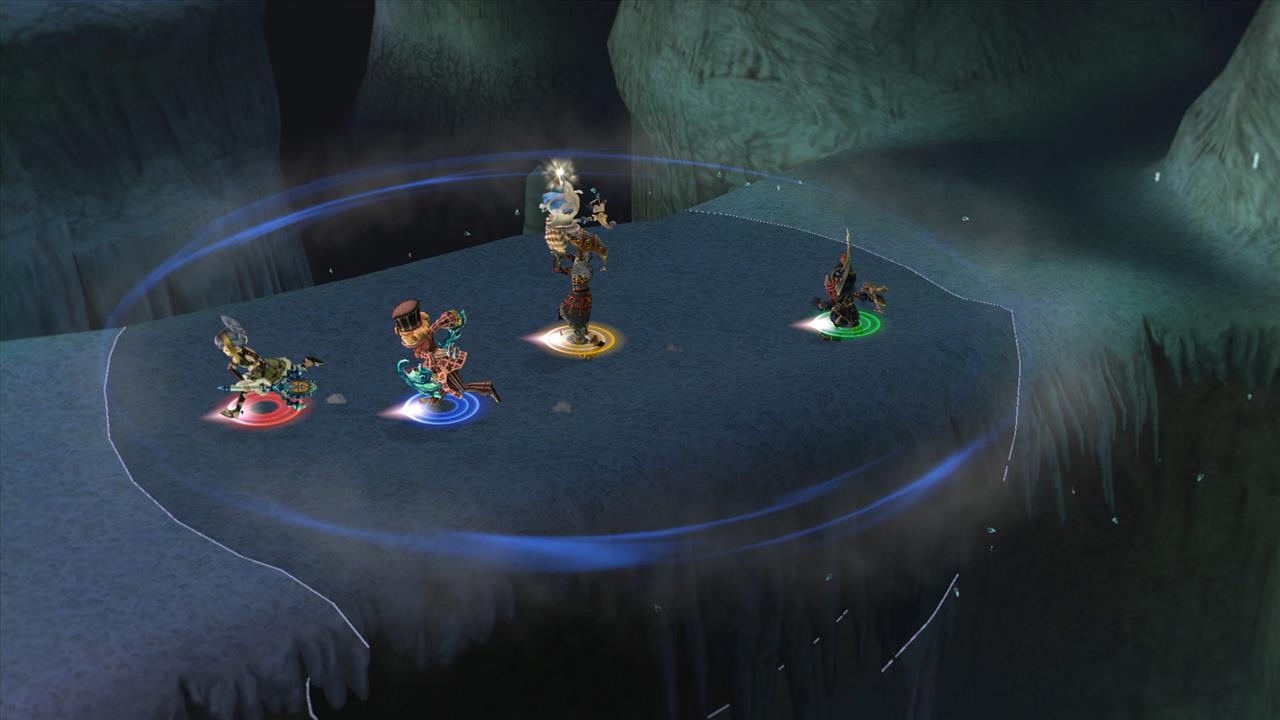 In single player, a weird talking Moogle is provided to carry your chalice, but he complains about it constantly, and sometimes completely rebels, forcing you to carry it for a while. I didn't like his voice at all. He sounds like a bored 1970s soap actor. In multiplayer, someone has to pick the chalice up and move it if the team wants to go anywhere, meaning that everyone one has to stay together and move as one. An elegant solution to the problem of people wandering off if everyone is playing on the same screen, but this mechanic feels weirdly archaic and restrictive when they are not.

Wandering the dungeon, you fight bad guys by jamming on the X button, which is also used for spell-casting and item usage. You toggle these functions with a bumper button, which feels fumble-y and odd when you could just assign a separate button to each—but whatever. Magic doesn’t carry over from dungeon to dungeon, so you have to pick up little balls that baddies drop and assign them to your power bar to use them. You start over with zero magic in each new dungeon.

At the end of the dungeon, a boss must be defeated. Bosses have a pretty large health bar, but can be overcome pretty easily by running out of the way of their attacks, and then swooping in to beat on them. Pretty basic stuff, but not un-fun. After the boss battle, you grab the myrrh and pick up a relic, which is basically the only form of progression in the entire game. Your character gets a little boost to attack power or magic. You leave the dungeon with your chalice slightly fuller, and move on to the next. As I mentioned, the entire thing feels pretty simple, like a kids game from 20 years ago. 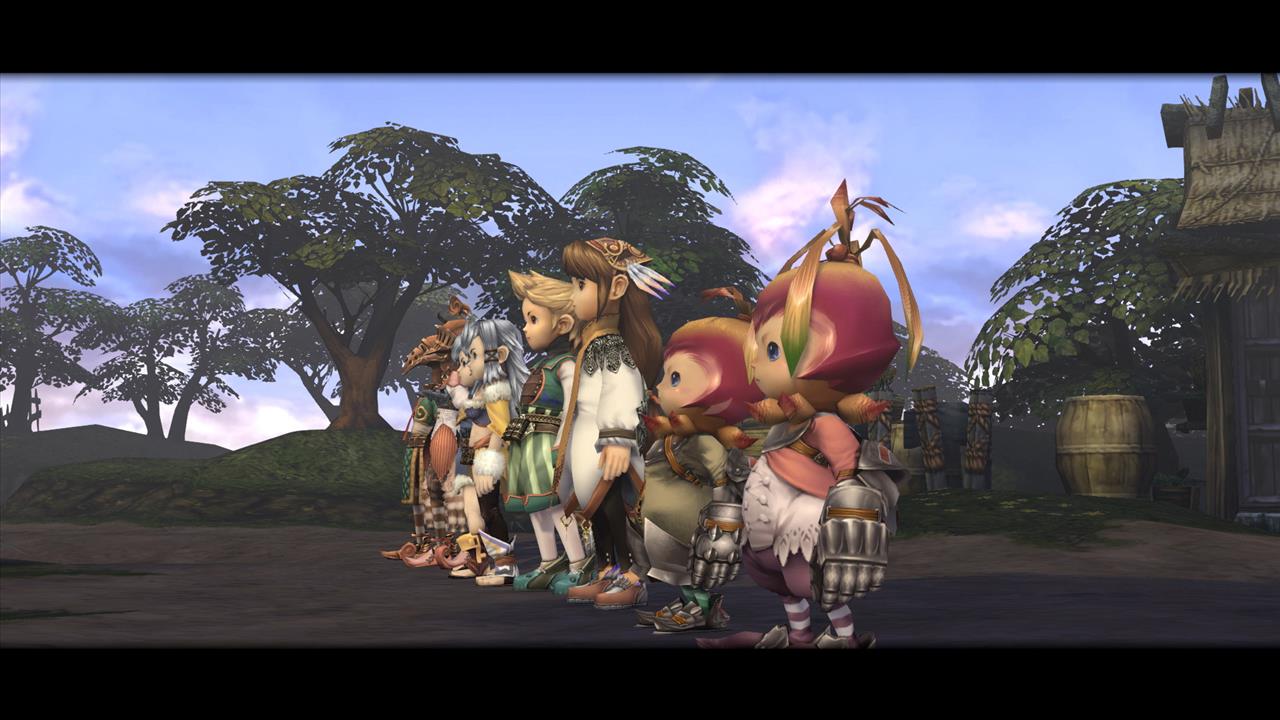 Of course, Crystal Chronicles is known for being a multiplayer game, with players gathering around one TV and shouting at each other over the chaos that ensues while four people attempt to wrestle the chalice and fight the boss. And this new version provides—remarkably—nothing even remotely close to that experience.

For starters, there is no local multiplayer. I imagine that this is due to the difficulties involved with allowing four players to manage their inventories on the same screen, a job that used to be handled by four synced GameBoys. The lack of this one basic feature that the game is known for feels very off, but would be acceptable if multiplayer existed in a more viable form.

Crystal Chronicles is available on four platforms: PS4, Switch, iOS, and Android. Cross-play is handled…strangely. As opposed to dumping folks playing on different platforms onto a common server, Crystal Chronicles has players issuing each other pass codes in order to enter each other’s game. This would be fine, I guess, if a little odd, but the game does very little to explain to the player how all this works. There is a ton of trial and error, and the entire process is obtuse and frustrating. 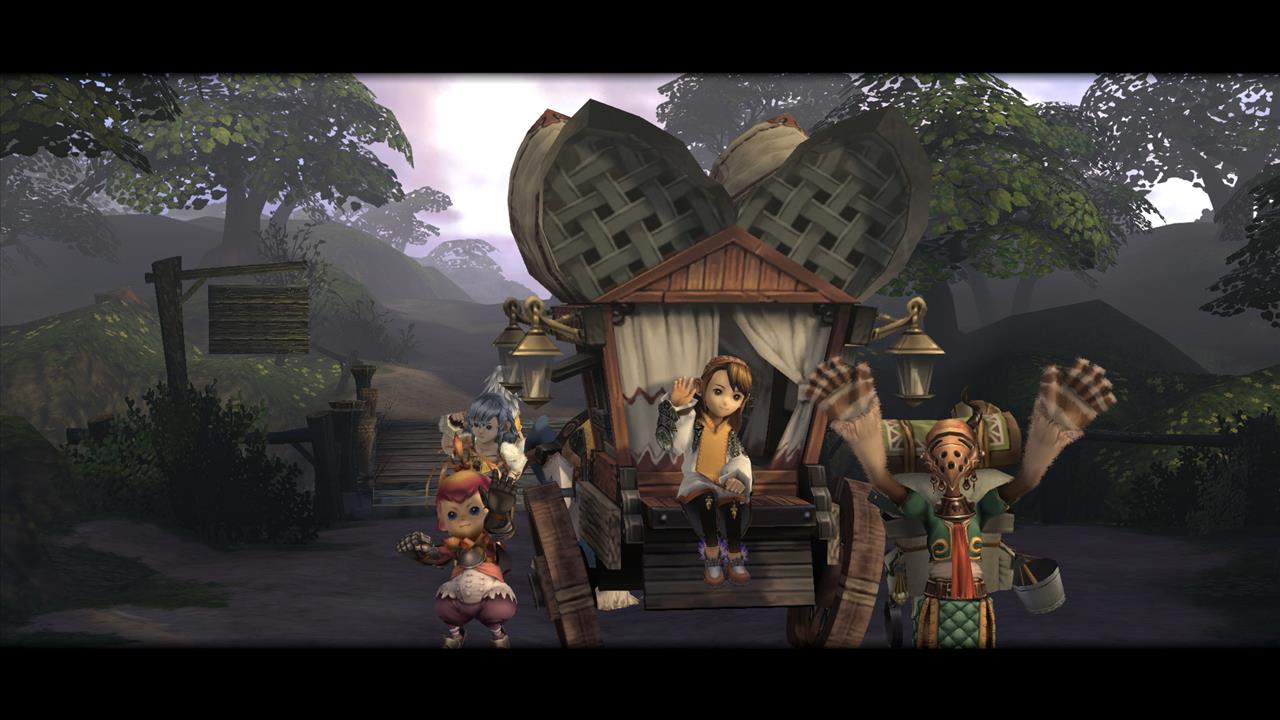 I was playing on my PS4, and I had my son download the game on his Switch at college. The idea was that we would play through a few dungeons, sampling the cross-play functionality while simultaneously trying out the “lite” version of the game, a free-to-play version that allows players to explore dungeons with friend that own the full game. Getting this all up and running was a huge hassle. Over and over again, we attempted to “Set Out Together” thinking that this would lead us to the menu to connect, and the game would simply inform us that “This feature is not currently available,” with no explanation as to why.

We eventually figured out that he had to start the game on his own, sit through all the opening stuff, then progress to the first dungeon by himself. Then we would be able to coordinate over the phone, pass the code, and play the dungeon together—each with our phones clutched to our ears with our shoulders, so  we could chat with our hands free to play.

We played through a couple of dungeons. It should be noted that everyone gets dumped out of multiplayer at the end of each dungeon and has to redo the entire code-passing process over and over again. Finally, he just said “Is this it? This is the whole thing?” Conceding, I agreed that it was time to stop playing, and went back to quietly crawling the kinda boring dungeons by myself. Any attempts to get his older brother to play with us were unsuccessful, and the ability to drop in and out of public games was not readily apparent. I was left on my own to finish the game in solitude. Just me and my hostile Moogle. 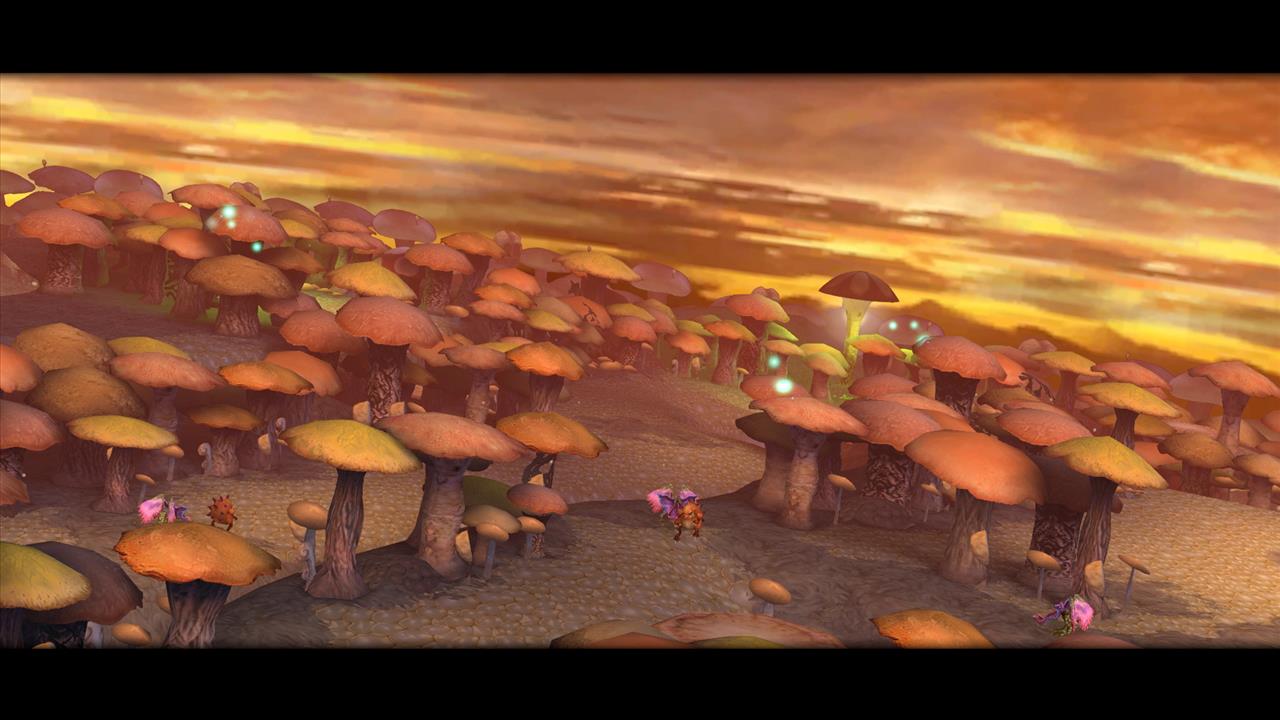 I work in software design, and I have experienced how solving one problem leads to another, then another, then another. And with each problem’s solution, you find yourself further and further away from your original intended product. I can easily see how the team revamping Crystal Chronicles problem-solved their way into this version of this game. But what ended up making it to market isn’t terribly viable for today’s gamers, who expect slick interfaces, seamless integrations, and advanced chat functions.

I’m sure there are some teams of four out there in the world having a grand time dungeon crawling through Crystal Chronicles, but I’m not sure who they are. The best possible scenario I can imagine is a team of four playing together on individual Switches in the same room. Maybe this could happen with college or high school kids, if there weren’t a pandemic.

As a single-player game, there isn’t much that identifies Crystal Chronicles as a Final Fantasy game. It feels like a game developed elsewhere, then sprinkled with Moogles and Phoenix Downs to fit the franchise. There is little progression, a weird battle system, and the whole thing feels overly simplified.

The best thing that one can say about Final Fantasy Crystal Chronicles is that it is harmless. Crystal Chronicles’ continued existence on planet Earth is not harming me, and I can understand how the decisions that led to its Frankenstein-like state of being were made. But the bottom line is, I simply don’t want to play it very much. Playing Crystal Chronicles is too much hassle for too little reward. And when I sit down for a relaxing evening of gaming, hassle is the last thing I’m looking for.

Without much reward for playing single player—and an obtuse and difficult to navigate multiplayer system—Crystal Chronicles Remastered Edition simply creates too many barriers to entry for the player to overcome. While the simple gameplay could be fun with an easier interface, the complicated multiplayer will likely only be enjoyed by the most hardcore of fans. Not an outright bad game, but certainly a difficult game to play.