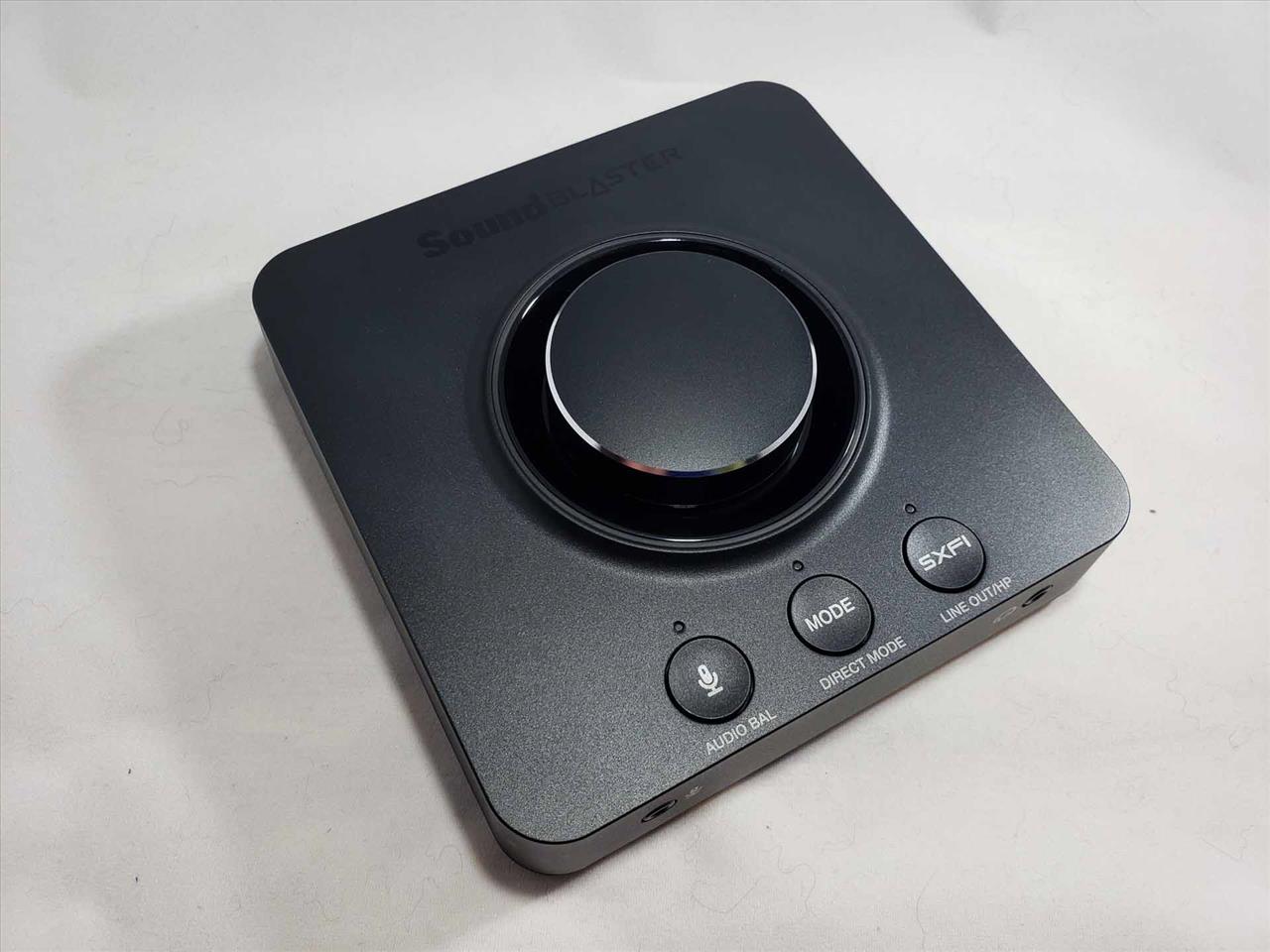 Creative Labs has had a few external USB sound cards in their portfolio and one that I saw at CES was the Sound Blaster X3. This external sound card was not only designed to provide better sound than your internal computer’s sound card, but to also bring Creative’s Super X-fi technology to your computing or console device.

Now, you could have attached the original Super X-Fi dongle to your PC and got it to work that way, but the X3 sound card makes it a lot nicer companion to your computer because of the included outputs in the back. But we’re getting a little ahead of ourselves here. Let’s start with the basics.

The Sound Blaster X3 is a pretty simple device. It’s a box shape with a large volume dial on top with three buttons underneath. On the front of the X3 are two connectors for the headphones and mic, both 1/8" connectors. On the back are 1/8" surround sound connectors for a computer speaker setup, an optical output connector, a single line in connector, and a USB-C power connector. 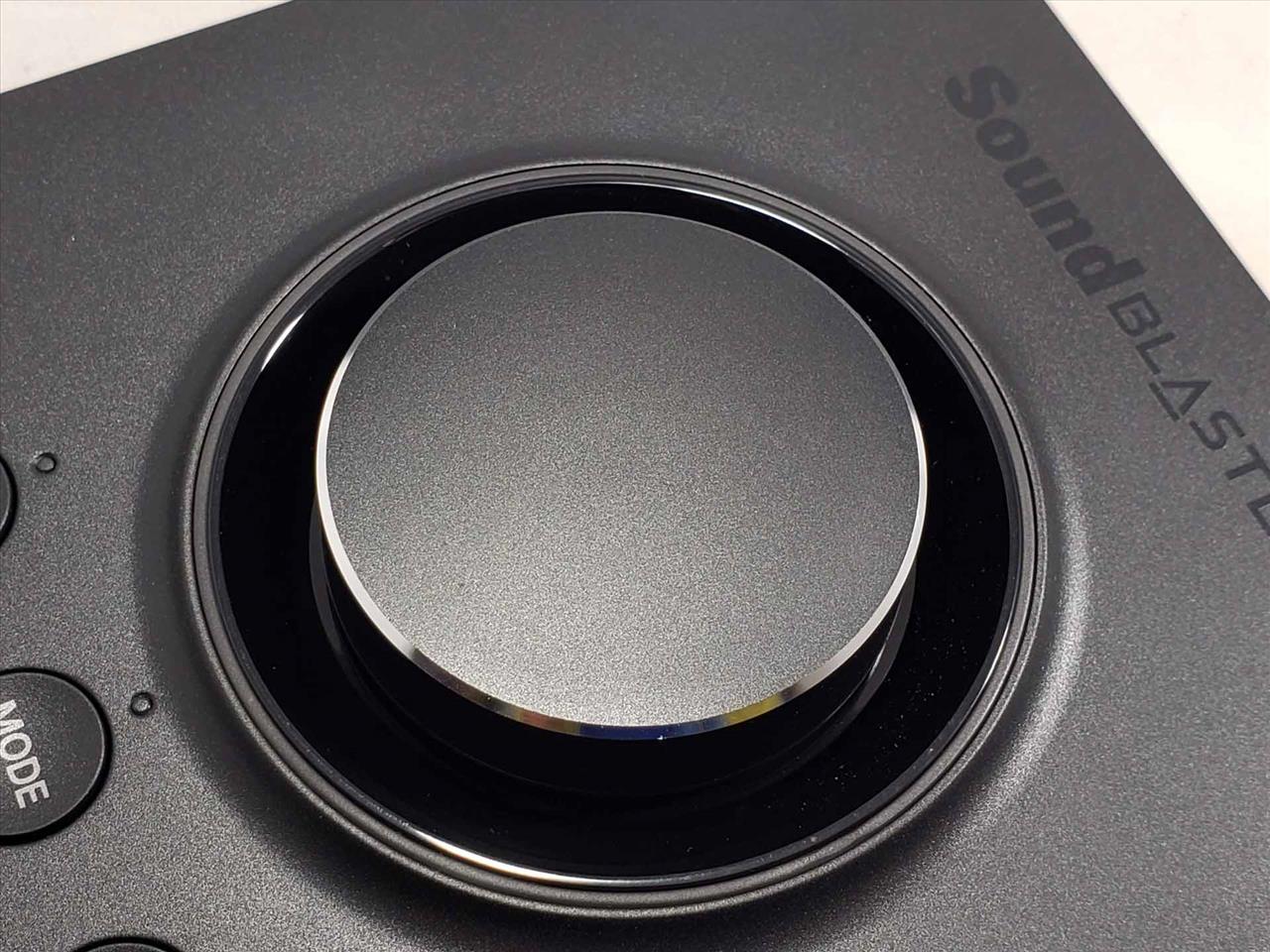 The connections for the microphone and headset, I think, should be closer together on the front. Separating them out to opposite ends of the front make it look more symmetrical, but I prefer them being closer together so I can keep the lines leading in closer together.

For the rear, the 7.1 connections are lined up and labeled clearly for easy connection. When connecting with the TOSLINK, be advised that the X3 doesn’t do any DTS audio decoding. I personally use the TOSLINK to connect my sound cards to my Logitech speaker setup as I just like having to deal with a single cable.

On top is a large volume dial that has a slight ratcheted feedback when turning. Around the outside is an LED ring that will let you know of certain statuses such as when you’re controlling the mic volume. Muting is really easy as you press down on the button with the ring slowly flashing to let you know your voice is not being transmitted. 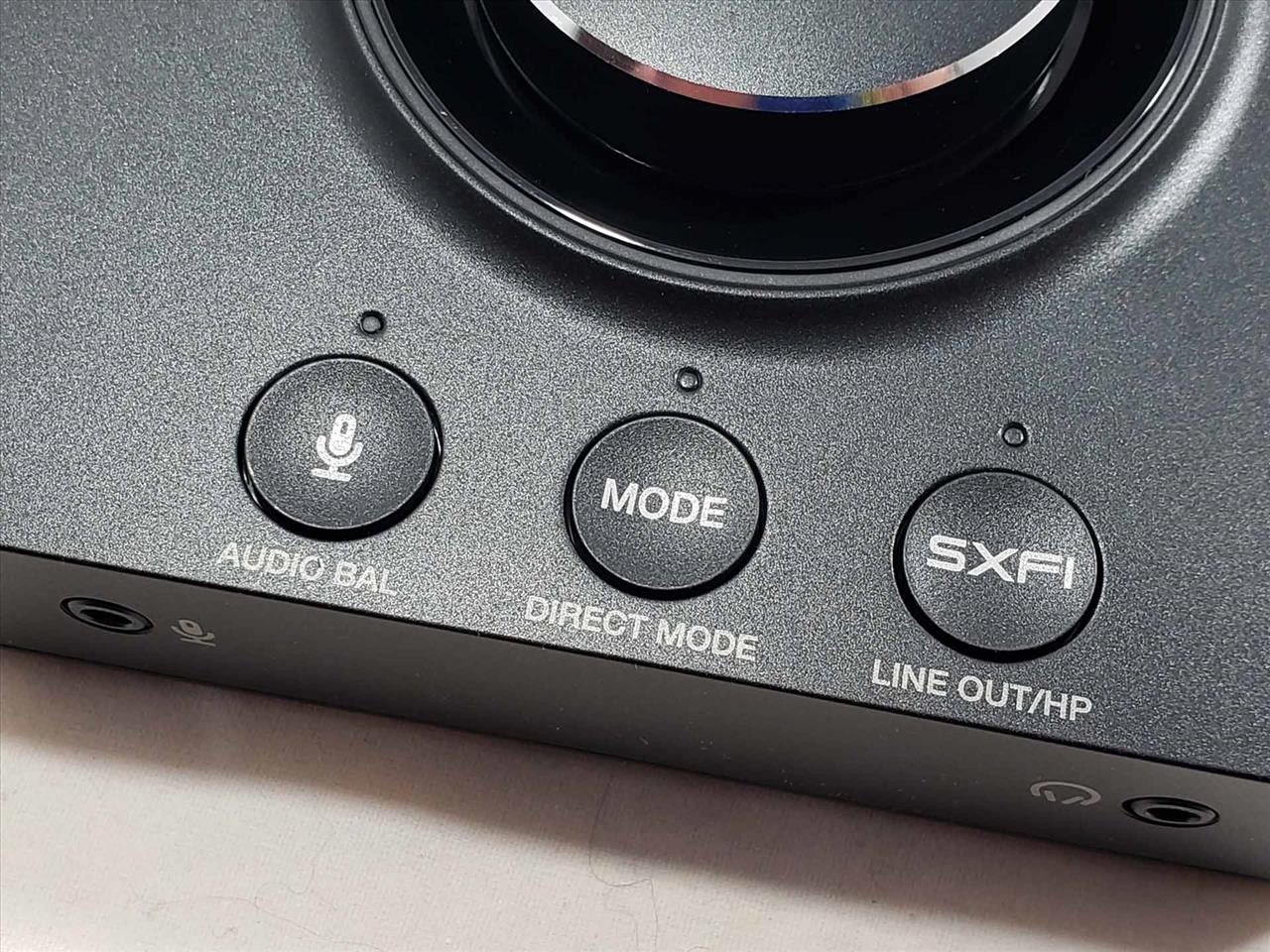 Beneath the volume dial are three buttons: mic muting, mode selection, and Super X-Fi toggling. The buttons are OK and have a good but hollow clicking sound when pressed with colored lights above to let you know which mode is currently enabled for each button.

The unit is considerably larger than their previous external USB sound cards, but it does pack more connections. The plastic housing is fine. Because of the size, it’s definitely not as portable as the previous Creative USB sound cards, which were pretty easy to keep in one of my pockets in my laptop bag for when I wanted better sound than what the laptop had to offer.

Powering the unit is through a single USB cable with USB-C on the box itself and Creative includes a USB-C to USB-A wire. The wire is around 3 feet and 10.5 inches long which should work for most setups when using it with a computer or PC. If you’re planning on using this with a console though, that’s going to be short and to be honest, I wouldn’t use something like this with a console as that would be too much wire to run from, say, an entertainment center to where you are sitting, most likely. I am happy Creative went with a USB-C connector, so if you have a USB-C connector on your computer you can use a USB-C to USB-C to connect the X3. For now, most computers and laptops feature a USB-A port or two, but it is future proof in case you decide to pick up a laptop that only has USB-C connectors. 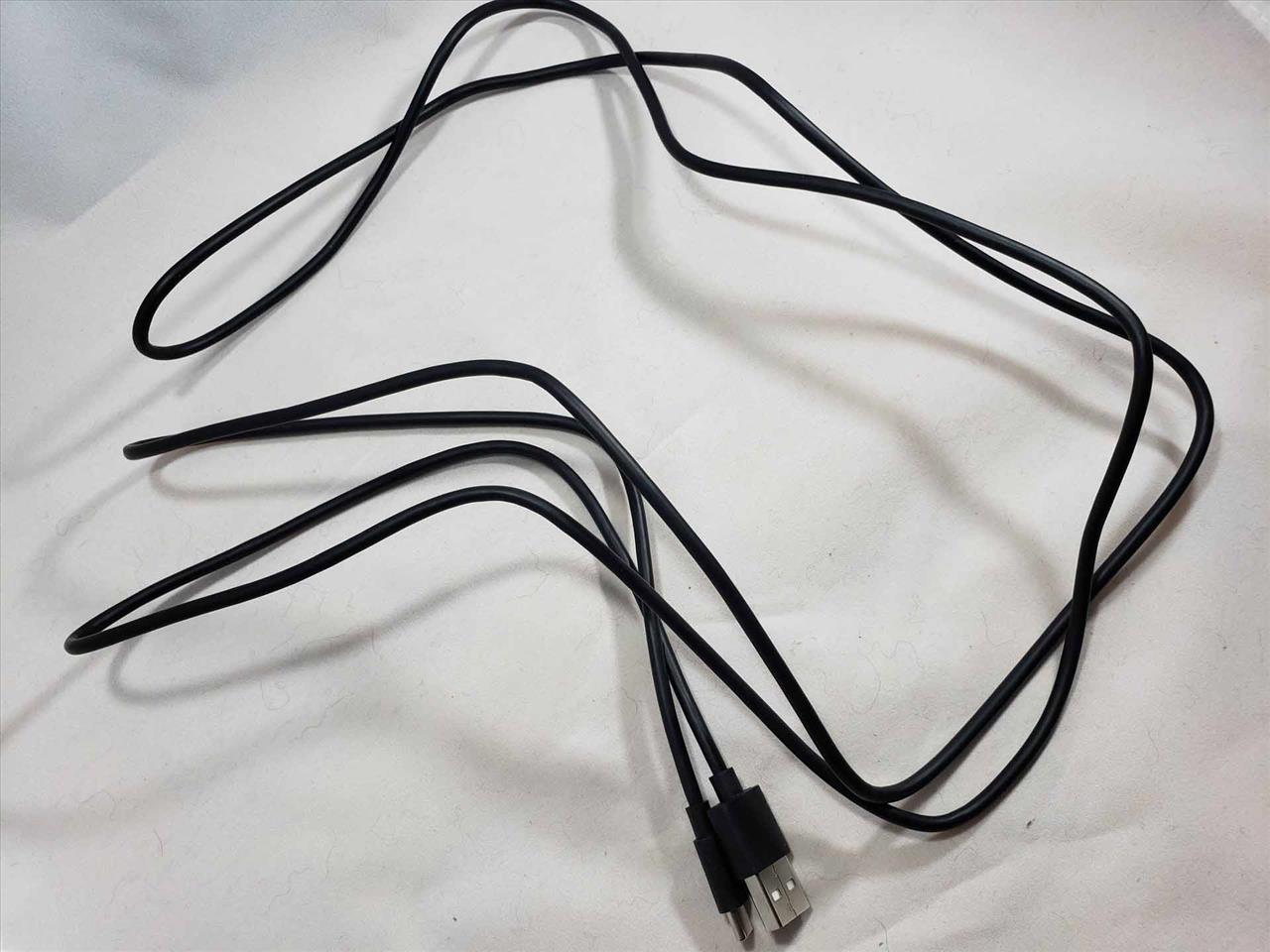 I mostly tested the X3 using a headset setup and with my Surface Book 2 and on my main gaming computer. You’ll need to install some software not only on your computer to get the most out of the X3, but also on your phone to map out your ear for optimal Super X-Fi performance. If you don’t know the entire setup of Super X-Fi, here’s my look at the technology at CES 2019 and how it was the standout product of that show.

Plugging in to the computer, the X3 was easily detected and a large amount of options were presented to me. I had full EQ controls and access to many different presets. There’s a good number of profiles in place so you can get a lot of variety in how you want your sound to be.

Scout mode is Creative’s gaming mode that enhances certain sounds in games. It’s a feature that’s been present in past sound cards from Creative and it could help you discern those hard-to-hear sounds in some games. I found it to be OK and it works in some things better than others, but I mostly turned that off when playing games. 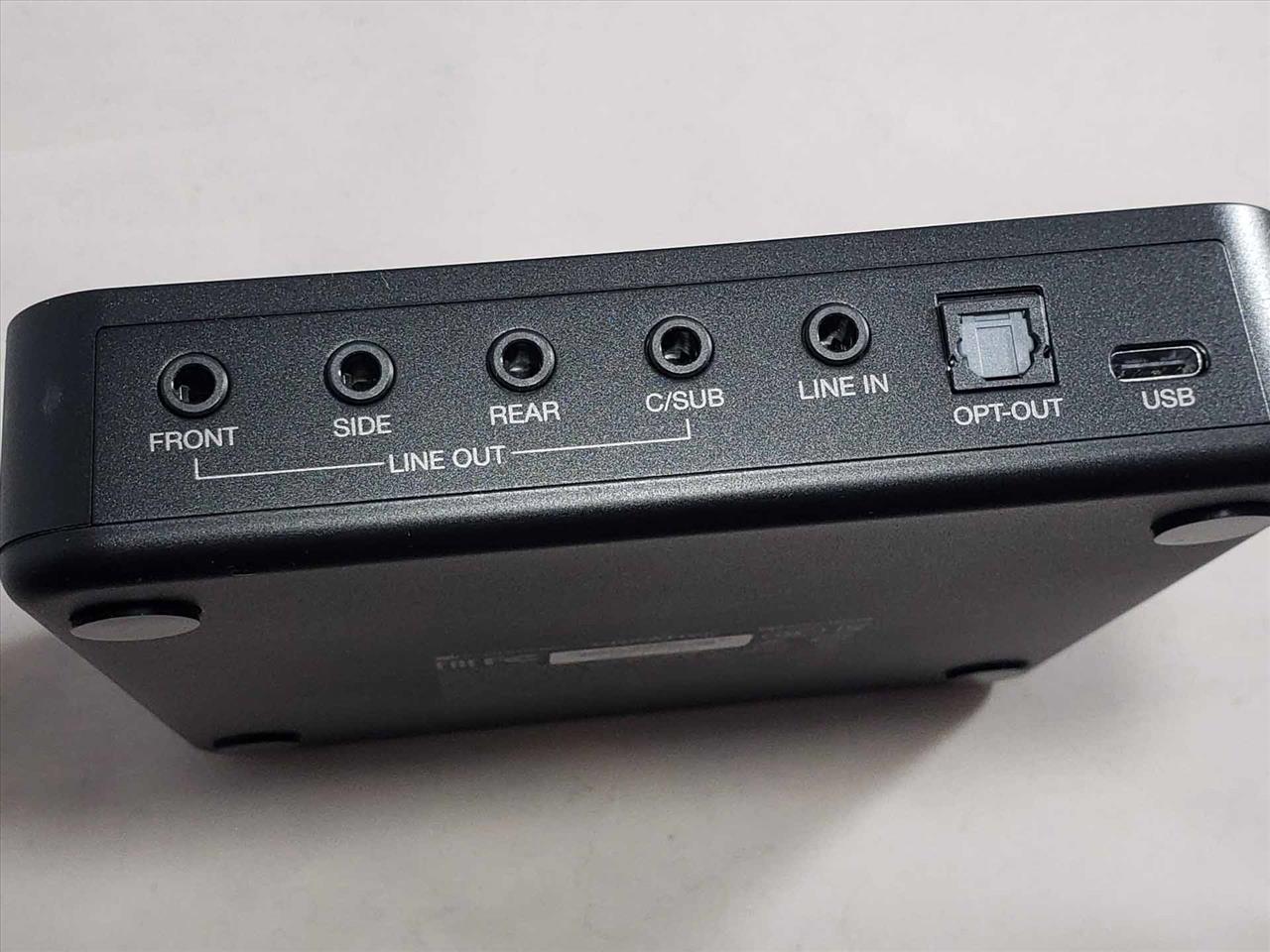 Throw in Super X-Fi and the X3 is a pretty versatile external DAC. In fact, I was overwhelmed by the amount of options available for you to control the sounds from the X3, just like when I tried out the Sound Blaster AE-9. Super X-Fi has been something I’ve been big fan of since I first heard it, and having it on a portable sound card like the X3 is a great addition.

Installing on my computer which already has a Sound Blaster AE-9, the software allows you to switch between the two so you can setup each card individually in the same program, which was nice. You’ll be asked to login to your Super X-Fi account, which then will download the profiles you setup on your phone to the X3.

Because of the amount of connections available, you shouldn’t have any problems finding the right one to connect to your computer speakers. Whether it’s stereo or 7.1 setups, the X3 has either the SPDIF or 3.5mm connections you’ll need to get it connected to your speaker setup. 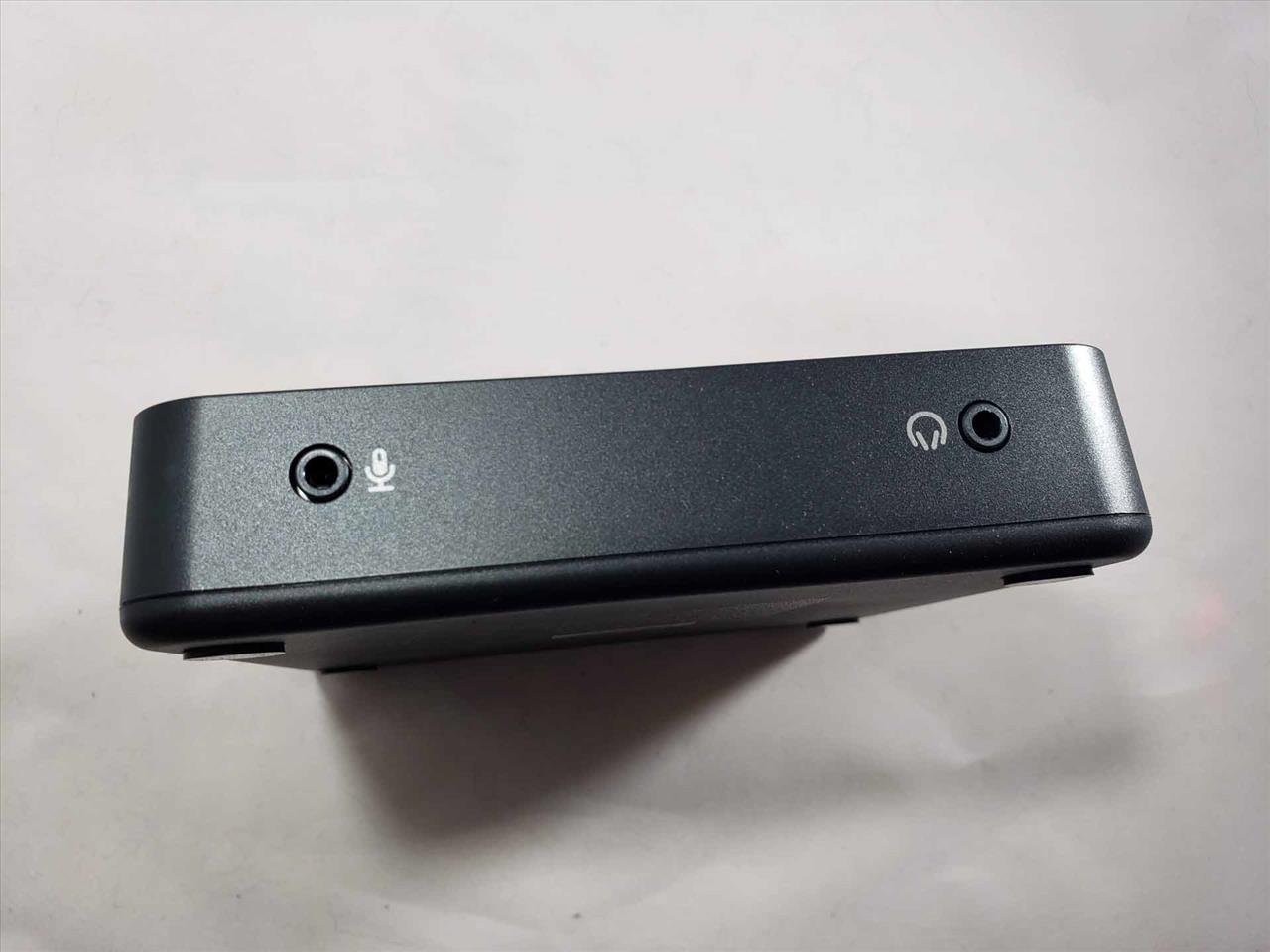 Playing through various games, the X3 does an excellent job at providing clear, feature-rich sound. It’s a definite improvement over the internal sound card on my PC and on my Surface Book 2. Sound was clearer and more pronounced through the X3. I didn’t turn on Super X-Fi with gaming, though, as I found the effect to overtake the game sounds making them sound more hollow and less immersive. At best, it was better to have Scout mode on than Super X-Fi and, for me, the Super X-Fi feature is more beneficial in movies and music.

When watching movies or listening to music, switching on Super X-Fi would provide a much richer experience, depending on the source material, of course. It’s up to you to decide whether it does sound better with Super X-Fi on. But for me, having the illusion of the sound coming from speakers in the room with my headset on was really the best way to enjoy said media. You’ll get some semblance of sound coming from a specific location with the virtual surround sound enabled along with Super X-Fi. For me it was more so with Super X-Fi turned on, and that’s something that used to be hard for me to judge.

I did have a few reliability issues with the X3 though. For starters, there were a few times I’d reboot my computer and the X3 would be non-functional. No lights were on, and the only way for me to get it to work again was to unplug and replug in the USB-C cable. A minor annoyance, but this happened on one of my computers.

The software can be a hit or miss with stability. I’ve had multiple crashes with the software, but it’s not consistent. I can go a few weeks without anything happening—or it would crash on every reboot. A reload of the software would fix the issue, but again, a minor annoyance to deal with.

The Sound Blaster X3 can be used with consoles as I mentioned earlier, but you are limited to stereo and the Xbox One is not supported. At least you can get Super X-Fi working. But if your console is far away from where you sit, it can be inconvenient to either run a long cord to the box to have it sit near you or run a long 3.5mm cable for your headphones to the X3.

Something really neat that was the ability for the Sound Blaster X3 to work with your phone via Bluetooth to adjust the settings, should you attach it to a console. I was surprised that my phone saw the X3 and easily connected to it. Really good job here by Creative to offer a solution to adjust the settings without needing a computer to do so. It’s just that I think using the X3 with a console is not a practical solution, unless you sit right next to it.

Sound-wise, I think the Sound Blaster X3 really does a great job at improving sound over onboard solutions and laptop computers. The inclusion of Super X-Fi is great. That's something not even their top-of-the-line sound card, the AE-9, has. If you don’t want to install an internal sound card, or need something to go with your portable setup, the Sound Blaster X3 is a good candidate provided you can deal with some minor annoyances. It’s not as portable as, say, their Sound BlasterX G5, but it does provide a lot of functionality for its form factor.

A solid offering with some quirks, the Sound Blaster X3 will deliver quality sound and Super X-Fi to your computer or console, with plenty of options to boot.