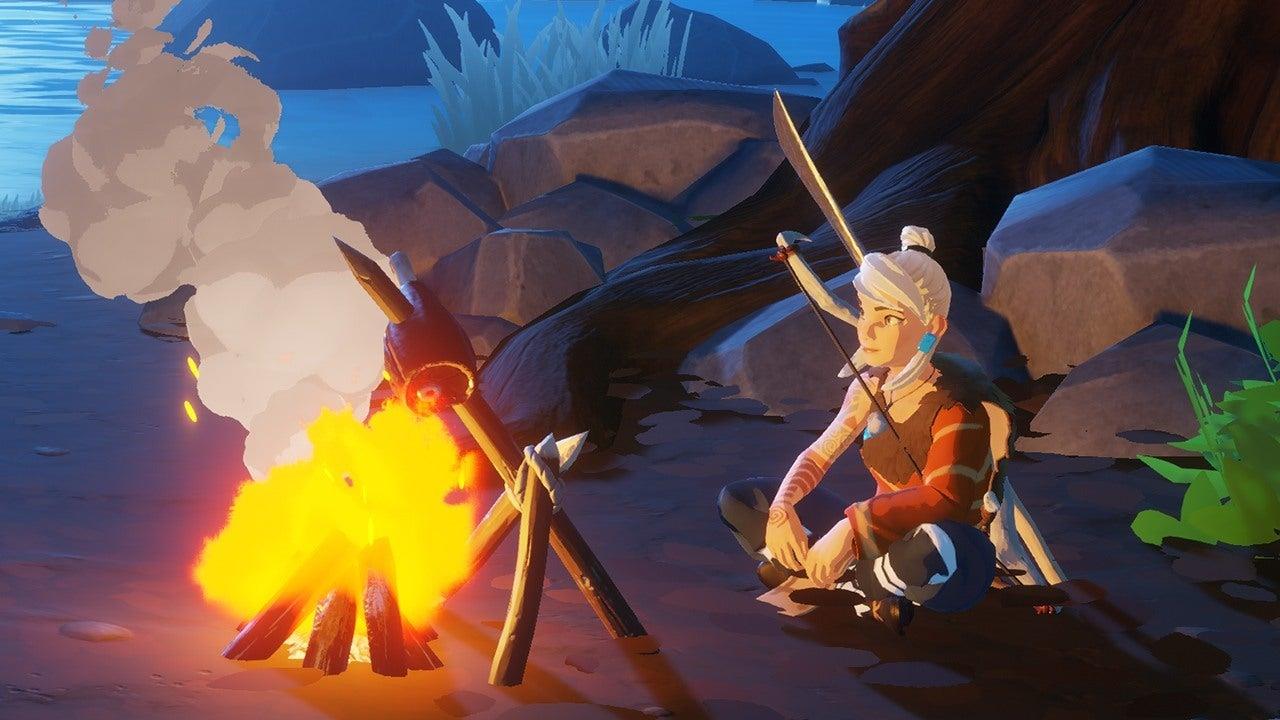 Windbound Tips and Tricks for Beginners

Windbound is a great game, and one that welcomes new players fairly gently—while still challenging them to stay alive. This isn’t a tough game exactly, but it is also no pushover, and it will not hesitate to kill you if it catches you slipping.

Here are a few tips and tricks to help you survive your time on the Lost Islands. There are a few spoilers in here, so if you want to discover all of the mysteries of Windbound yourself, maybe come back later! 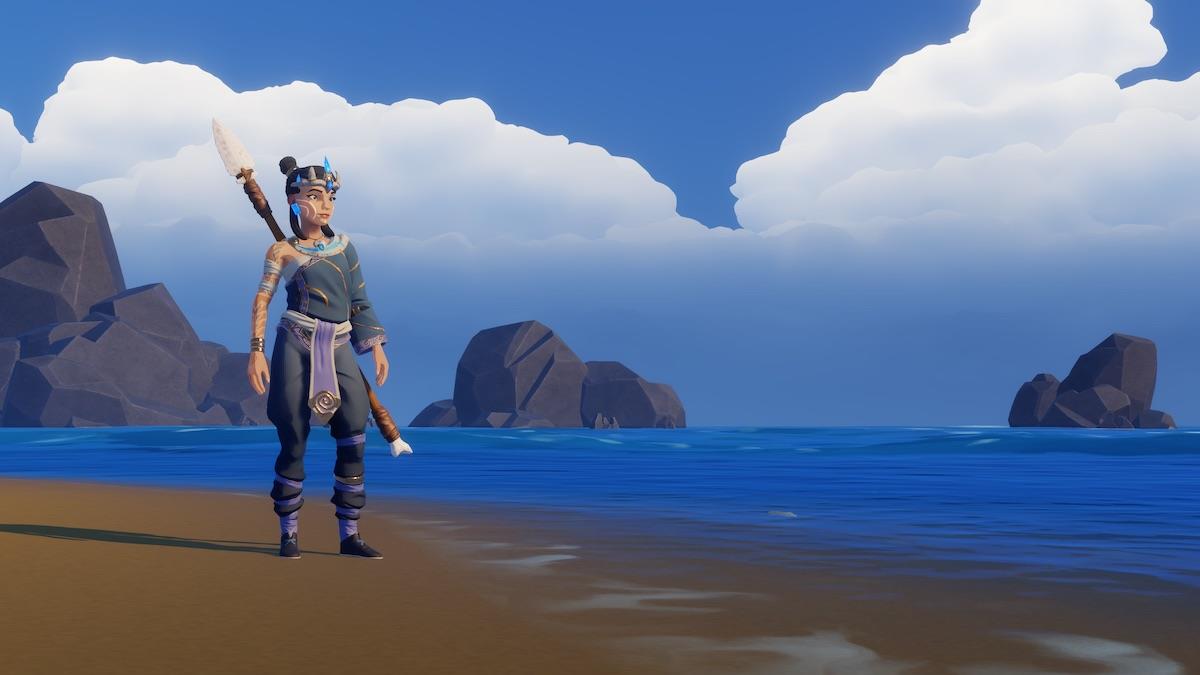 You Can Survive off of Berries and Mushrooms

I know, I know, you want to be a big, bad hunter. But you have to crawl before you can fly, so keep in mind that you can survive pretty much endlessly off of the berries and mushrooms that an island provides—so long as you don’t get hurt.

Berries grow on bushes scattered about the islands, and check the base of larger trees in wooded areas for mushrooms.

Mushrooms are safe to eat (no bad trips here) and, like berries, they respawn about once per day cycle. It’s a good idea to figure out where those things are located on an island—or at least remember where you saw them—just in case you need a quick hit of stamina.

You might find some truffles just laying around and wonder where they came from. Surprise! They were dug up by Razorbacks, those aggressive little pigs you see running around everywhere.

Here’s the deal: Razorbacks won’t attack you unless they see you killing some of their piggy buddies. Those reddish-brown pig-like creatures are pretty much one-hit kills, but if you do it within sight of a Razorback, he’s going to come after you—and Razorbacks can be surprisingly dangerous. Wait until the reddish-brown guys are off on their own and knock them off then.

Killing a Razorback outright will get you at most one meat, one hide, and one bone. But if you follow one around for a while, they will dig up truffles at a rate of about one per minute. Truffles can be gobbled on the spot, or you can cook them over a fire for an even more powerful boost of health and stamina. 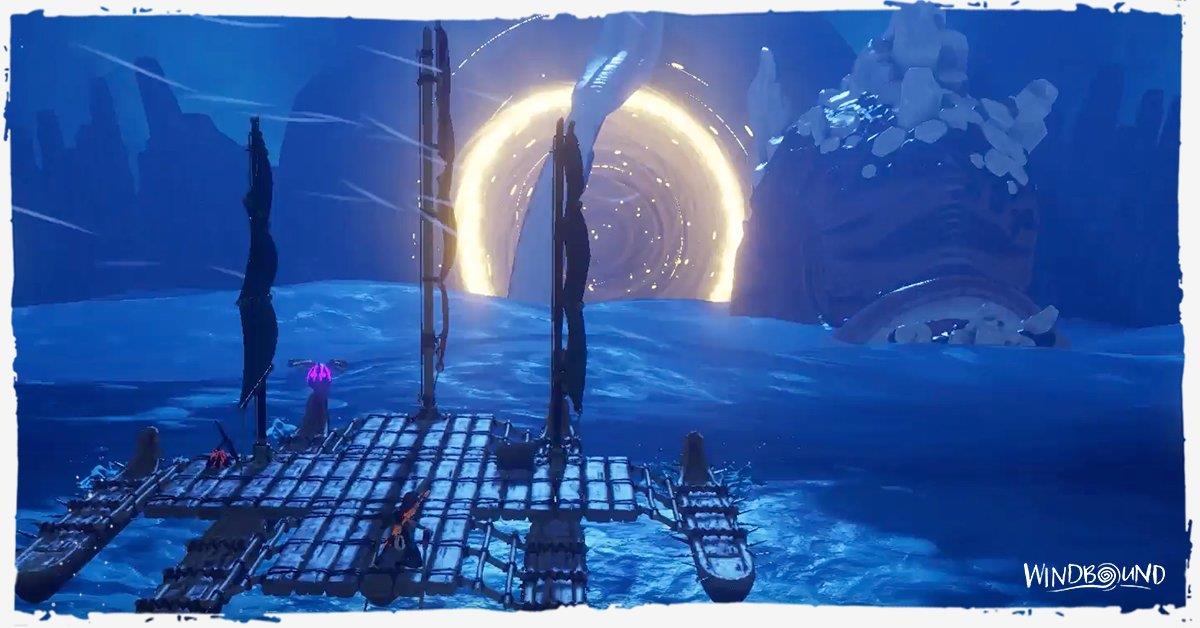 One Stack Will Do It

When gathering materials, you may be tempted to completely strip an island down and take everything it has to offer. Try to avoid doing so. If you are playing on Story mode, Windbound will return you to the last island you landed on if you die. If you have stripped it of all materials, you will find yourself marooned and will slowly starve to death.

A general rule of thumb is “Food respawns, materials do not.” Construct everything you need to make before leaving an island. If you are concerned about the future, grab enough of whatever resource you need to complete one stack. More than that, and you are just wasting space. I got myself into a cadence where I would build what I needed to build, then run around filling my stack before leaving. That worked out great.

Fully explore whatever island you are on, and then move on to the next. There is generally no reason to ever return to an island if you have grabbed everything it has to offer. Every material and every animal will recur on other islands. If you are running out of bamboo, keep on truckin’. There is more bamboo on one of the next islands you reach. If you backtrack, you are just spinning your wheels.

See Something Interesting? Go Check It Out!

Tons of little secrets are hiding on islands in the middle of the ocean in Windbound. If you see something glowing in the distance, it is almost always worth your time to go check it out. Many tiny islands are hidden among the atolls, but some secrets are right off shore, tucked among the rocks surrounding the bigger, primary islands.

If you see purplish-black jars on an island, it is worth the time to stop and smash them. Even if you have to jump off your boat in the middle of the ocean and swim to an outcropping, you will at least be rewarded with a little bit of currency. And sometimes, you will be gifted with a weapon that is well outside of anything you could make yourself at your current material level—or a gemstone that will allow you to make a legendary piece of equipment.

If you see a rock structure on an island you are exploring with a red or yellow glow about it, that is definitely a place you want to go visit. These structures, which are often hidden in out-of-the-way areas, offer permanent boosts to your health and stamina. 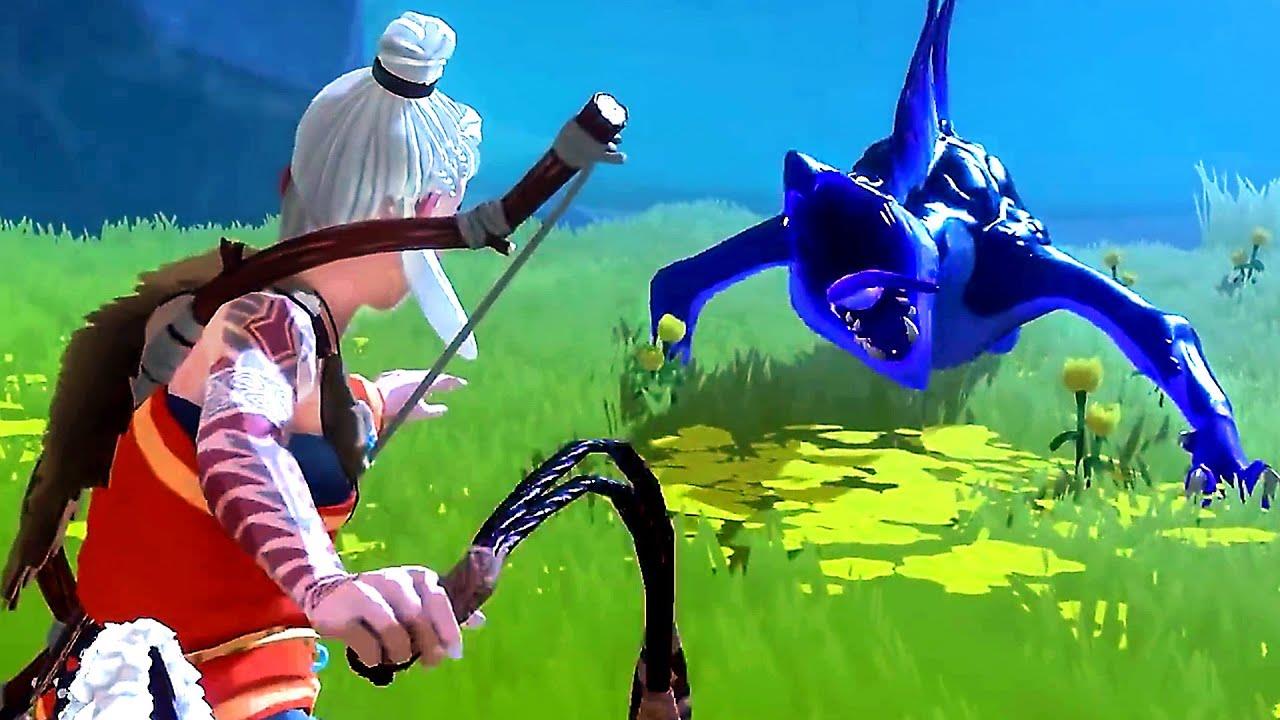 There is no need to go nuts hunting to create giant stacks of food before leaving an island. Food goes bad quickly. Even after you unlock the “food bag,” shuffling food in and out of it is often not worth the bother. Just create three or four pieces of cooked meat and move on. That will be plenty to get you through a lengthy ocean voyage and the time it takes to get started hunting on the next island you reach. Speaking of which:

Keep a Stack of Rocks and Sticks

Even after you graduate from using the sling (which uses rocks for ammo) to being a full-fledged archer, make sure you keep a stack of rocks on hand at all times. Rocks are needed to start fires, and sticks are needed to create a drying rack, which allows you cook up to three pieces of meat at a time. I typically start a fire as soon as I reach an island. If it goes out, you only have to shove a bit of grass into it to get it going again. Fires make a good “home base” and allow you to throw some meat on the fire and then go explore.

Food Doesn’t Go Bad Unless You Are Holding It

This is a biggie. If you have some food cooking on the fire for your next trip into the sea, don’t grab it until you are just about to leave. The countdown for food to go bad doesn’t begin until the food is actually in your possession.

Likewise, if you have gone insane and cooked a giant pile of meat, feel free to drop it on the ground until you need it. Any materials left lying around will be there when you get back—no animals are going to creep on your steaks. Then just pick it up again when you are feeling peckish.

First, a quick note: In each chapter, there is a large stone island—somewhat intimidating—where you take your keys after you have gathered them. My daughter dubbed this island “Crazy Island.” The name stuck.

Okay, so in each chapter, you are searching the islands for three keys, each of which can be found at the top of a tower. If you are anything like me, that third key will elude you for a really long time, making you wonder if the game is broken. Here’s a question: Did you sail out past Crazy Island?

Windbound is procedurally generated, so the placing of the islands is somewhat randomized. But in three out of five chapters during my first playthrough, the third key was sitting on a tiny island with nothing on it but a tower and a bit of grass. And where was this tiny island? Why, out past Crazy Island, where no one would think to look, of course!

But on a more practical note, if you're having trouble finding more islands, bring up your map of the entire chapter. Look for places you haven’t been, and go there. You’ll find it, I promise.

Archery Is Your Friend

Somewhere in the middle of Windbound, you will gain the ability to start using a bow instead of your trusty sling. Do that immediately. The sling is nice and all, but judging distance with your shots can be a bit of a crap shoot. Archery is far more accurate, and allows you to attack monsters from a great distance, keeping Kara far from harm.

You will likely find some pretty great arrows if you run around smashing pots, and the good news is that you can recycle them. After you kill a beast, looting its corpse will give you at least a few of your arrows back.

You can also make bows with some pretty sweet powers. I will leave those for you to discover, but once you have the ability to make more advanced bows and arrows, you should make it a priority. 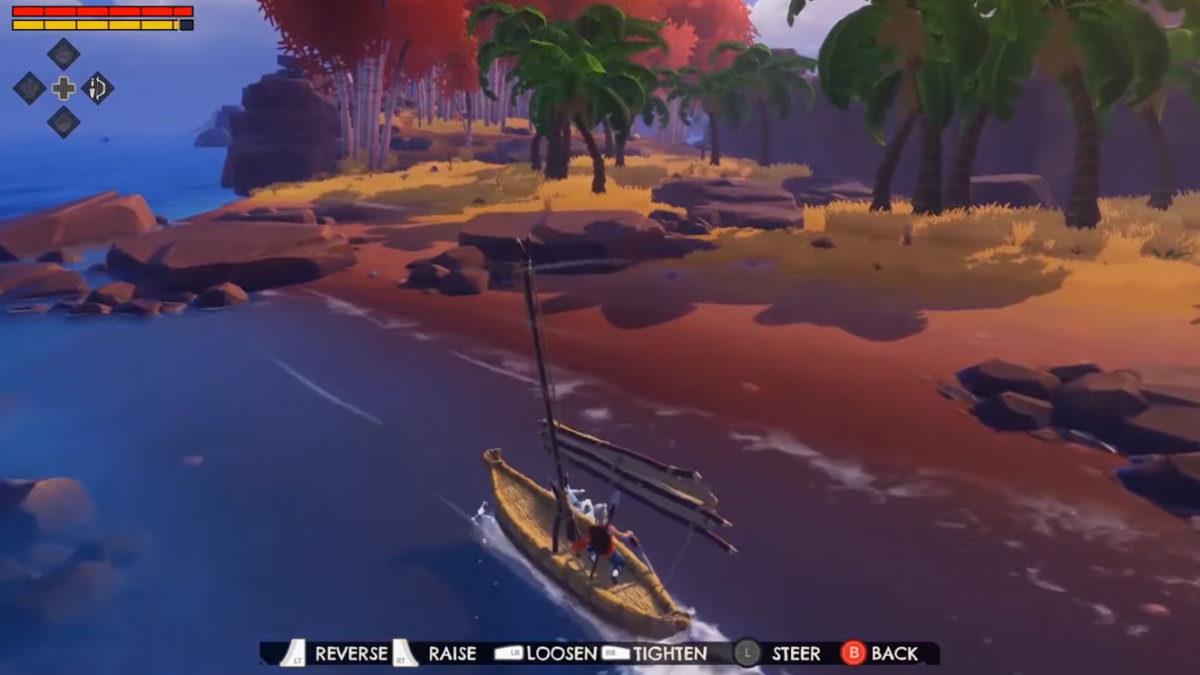 You Can Kill an Entire Pod of Grapes at Once

Sure, Windbound calls them something else, but they are round, they are purple—they are “Grapes.”

You will eventually come across an enemy type that lives in something resembling a hanging web cocoon, high up in the trees. Get too close, and the cocoon bursts open, spilling at least four Grapes onto the ground. These guys bounce around causing no end of trouble, and with their sharp teeth, they can do a lot of damage in a short amount of time (yes, the Grapes bite).

Grapes will lay dormant for about two seconds after attacking, so that’s a good time to spear them. But, if you time it right, you can kill all four of them the moment they hit the ground when they initially fall. Just creep up on them slowly, and make sure you are aiming right at them. It saves a ton of time, hassle, and potential costly damage. Plus, it is fun to kill them quickly, because they suck.

We hope you find these tips helpful. Windbound is a great game, with lots to discover and explore. Now get on out there on the open seas and kill some pigs!