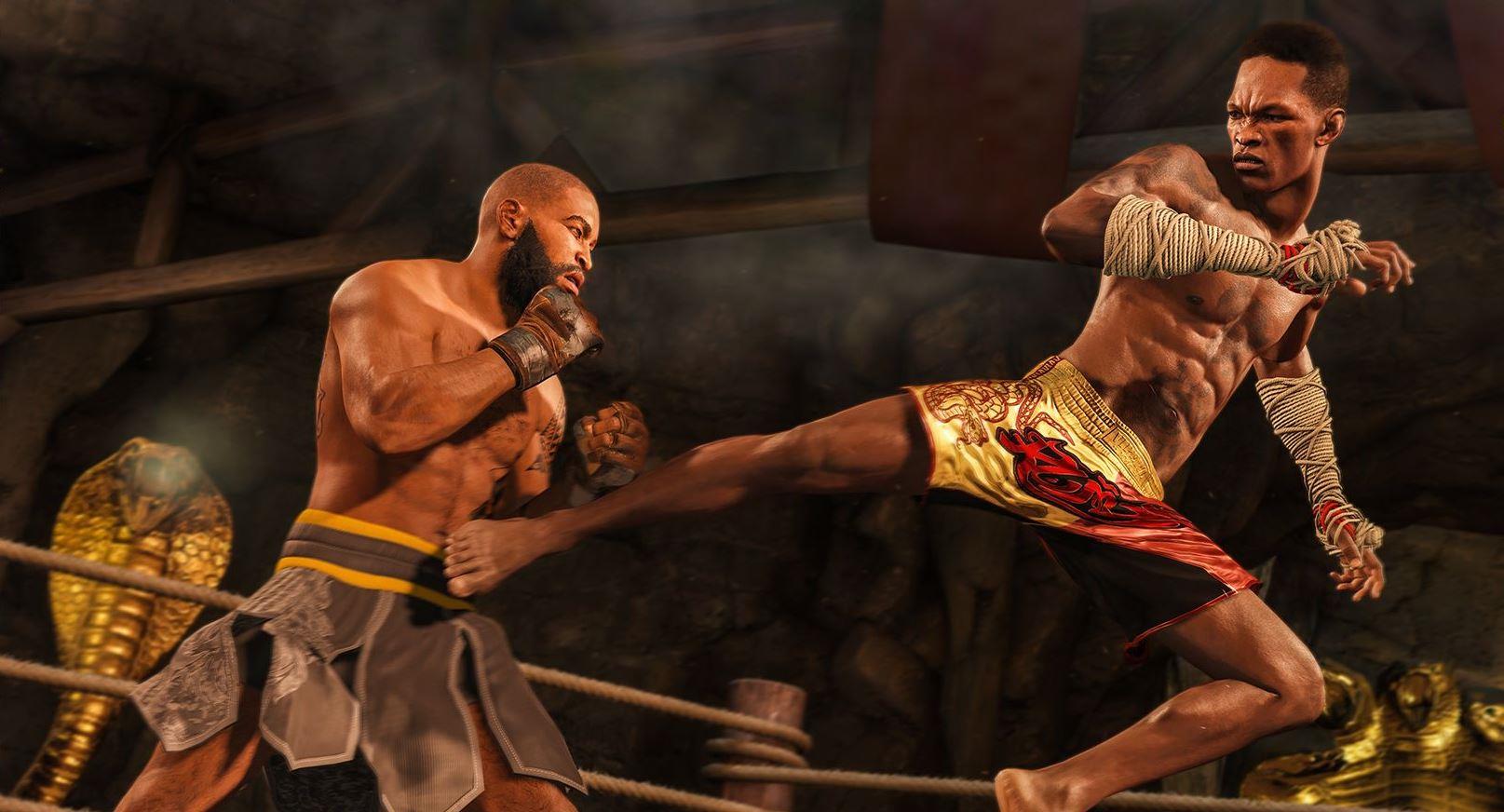 The EA UFC series has always been good but it's been missing that one thing to make it great. The games have gradually gotten better over the series but sadly EA UFC 4 really feels like the first game in the series to really, really add anything significant—while also cutting back in some areas. The good thing is that the gameplay has been improved, but it seems like everything else in the game really feels copied and pasted from the last entry.

This year's game sees a ton of changes to the fighting mechanics. First off, it's a lot faster than previous entries. Both fighters come out of the gates fast and furious. Punches and kicks are now thrown with more impact and velocity than they were before. Every punch and kick has been upgraded and has more impact than before with upgraded audio. 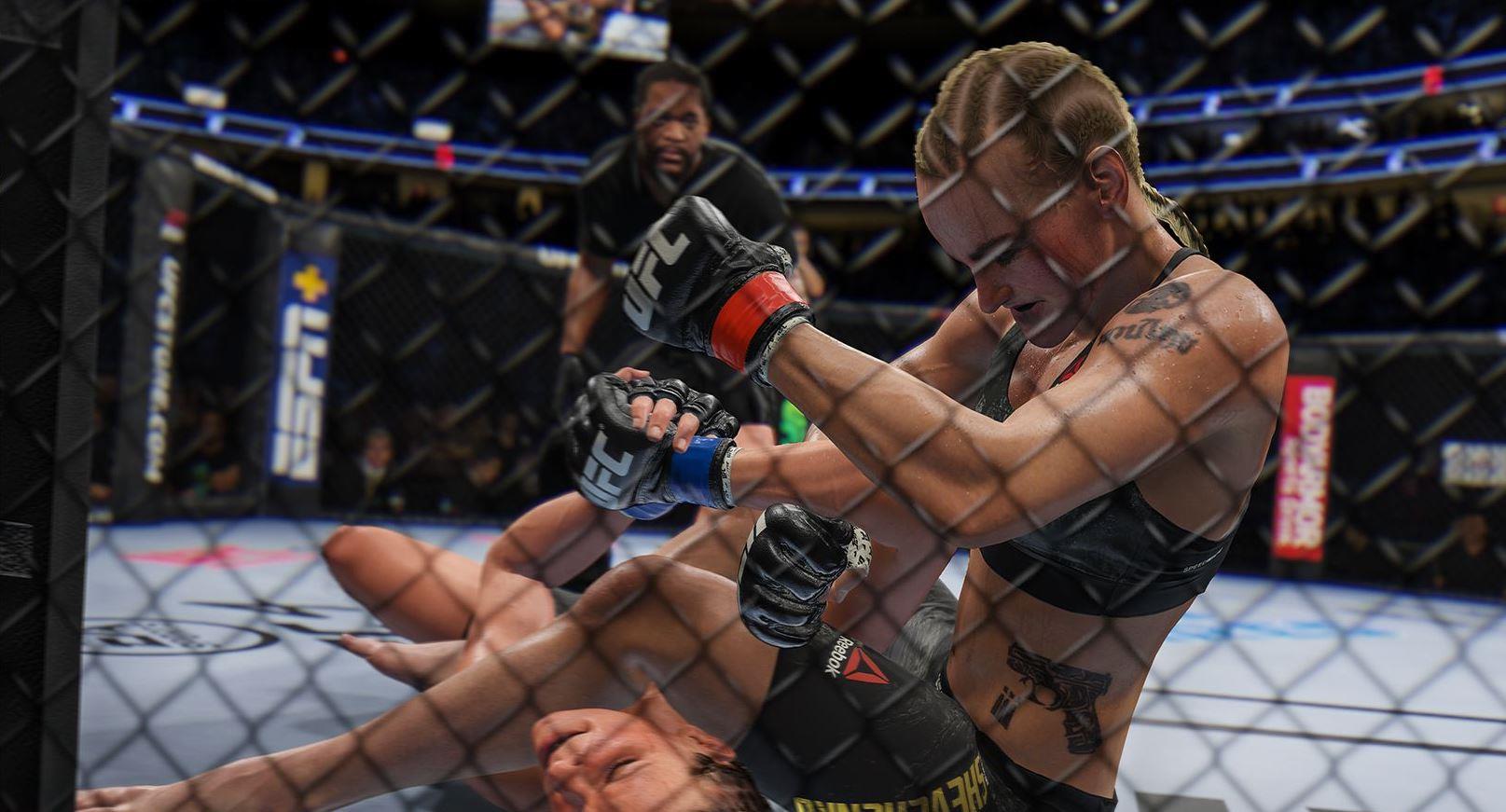 The only downside to this is, my god, the camera can sometimes whip around the screen at breakneck speeds making it hard to keep track of the fight. The other big update is the clinch game. To enter a clinch now you just need to be near your opponent and press R1 and square at the same time. To break out of clinch just hold back on the controller. This makes entering and leaving a clinch much more fluid and it looks a lot better than it did in previous games. You can also now push your opponent up against the cage for additional attacks.

The ground game, which had problems in the past, also got an overhaul with a new system that helps new players by boiling down the inputs into transition, get up, and submission. Honestly, even if you are a new player, I would recommend turning this off. While it may be easy to just have three options to pick from, it's a bad habit to learn if you want to get better. You should learn how to pass guard and transition normally as this sets up more opportunities for submissions and attacks. 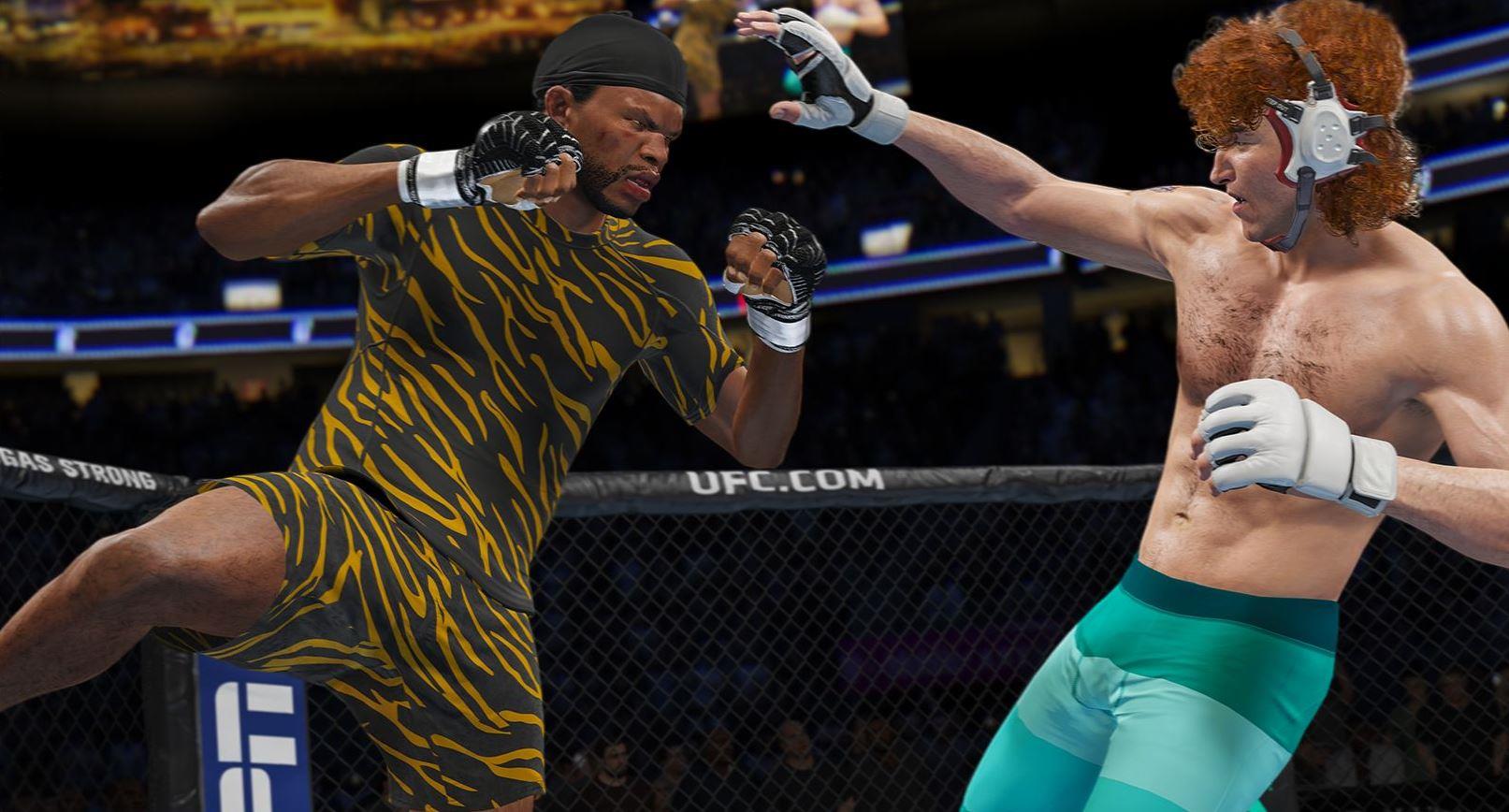 Speaking of submissions, the entire system has been overhauled. Gone is the gate system from previous entries. Now there are two types of submission minigames for both joint and choke submissions. One of them has a ring pop up on the screen with red and blue cursors. You need to keep your cursor over your opponents in order to make them tap. The other has you use L2 and R2 to swing your colored bar back and forth on a semi circle.

Both of these new minigames are extremely difficult. Even as a Jiu-Jitsu fighter I found myself almost never being able to make an opponent tap, even with maxed out submission stats. Other than that, the ground game unfortunately is still an awkward game of moving the thumbstick to block and pass guards or transitions. 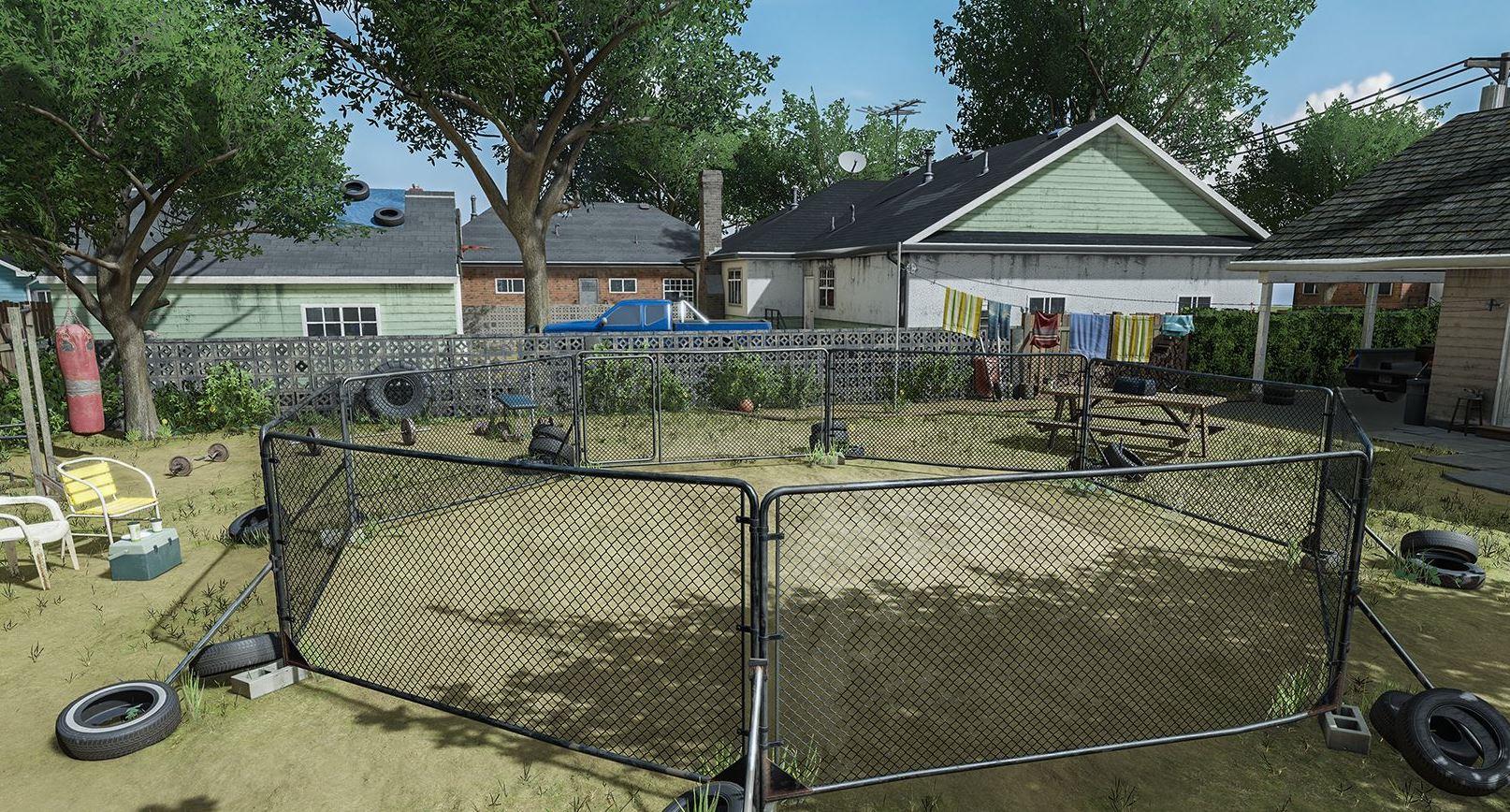 Career mode also sees some updates. This time around when creating a fighter you first pick your fighting style. You can choose between Kickboxer, Boxer, Wrestler, Jiu-Jitsu or Balanced. Choosing any of those styles will give you a boost in stats based on how you want to play. For instance, picking a Kickboxer will give all your kicks, roundhouses and snap kicks get a boost in power. Jiu-Jitsu gives you a boost in transitions and submissions.

When the career mode starts you meet Coach Davis who gives you a few pointers. Then it's off to the Ultimate Fighting Alliance to begin your career. Your performance here pretty much decides how quickly you enter the UFC. Perform well and Dana White might give you an opportunity in Dana White's Contender Series, or they he might just offer you a contract straight to the UFC. If you wanted to you could even decline and just stay in the UFA for the rest of your career. 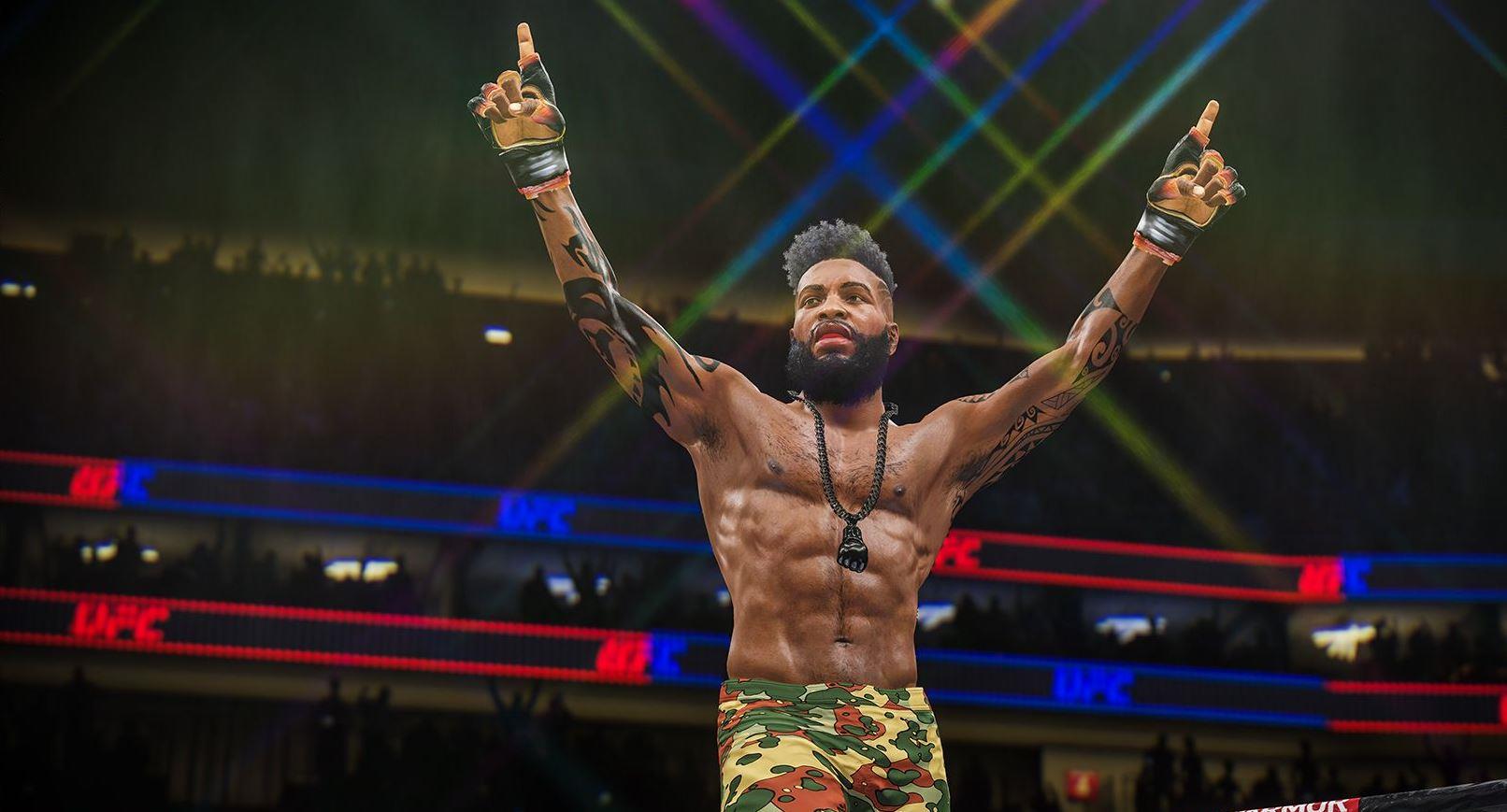 You get some nice cutscenes here but your created fighter doesn't speak in full sentences. They just stand around and respond with, "Yup," or, "Okay," when talking to Coach Davis. Then after a few fights...well, the cutscenes end. This is starting to become a trend with EA's sports games where the cinematic story mode is nothing more than a glorified tutorial. Once you actually make it to the UFC, the cutscenes pretty much stop and Coach Davis really has no influence on your character except for him being part of your walkout to the Octagon or if you earn a title shot.

After making it to the UFC, it pretty much just becomes a repeat of the career mode from UFC 3. There are some updates such as inviting fighters to your camp to learn their moves. If you knock them out you can use the footage to boost fight hype with that rival in the future. Unfortunately, a lot of the new additions don't do enough to make you feel like you aren't just playing EA UFC 3's career mode again. After awhile all of the social media stuff stops and it's just grinding through menus before your next fight. 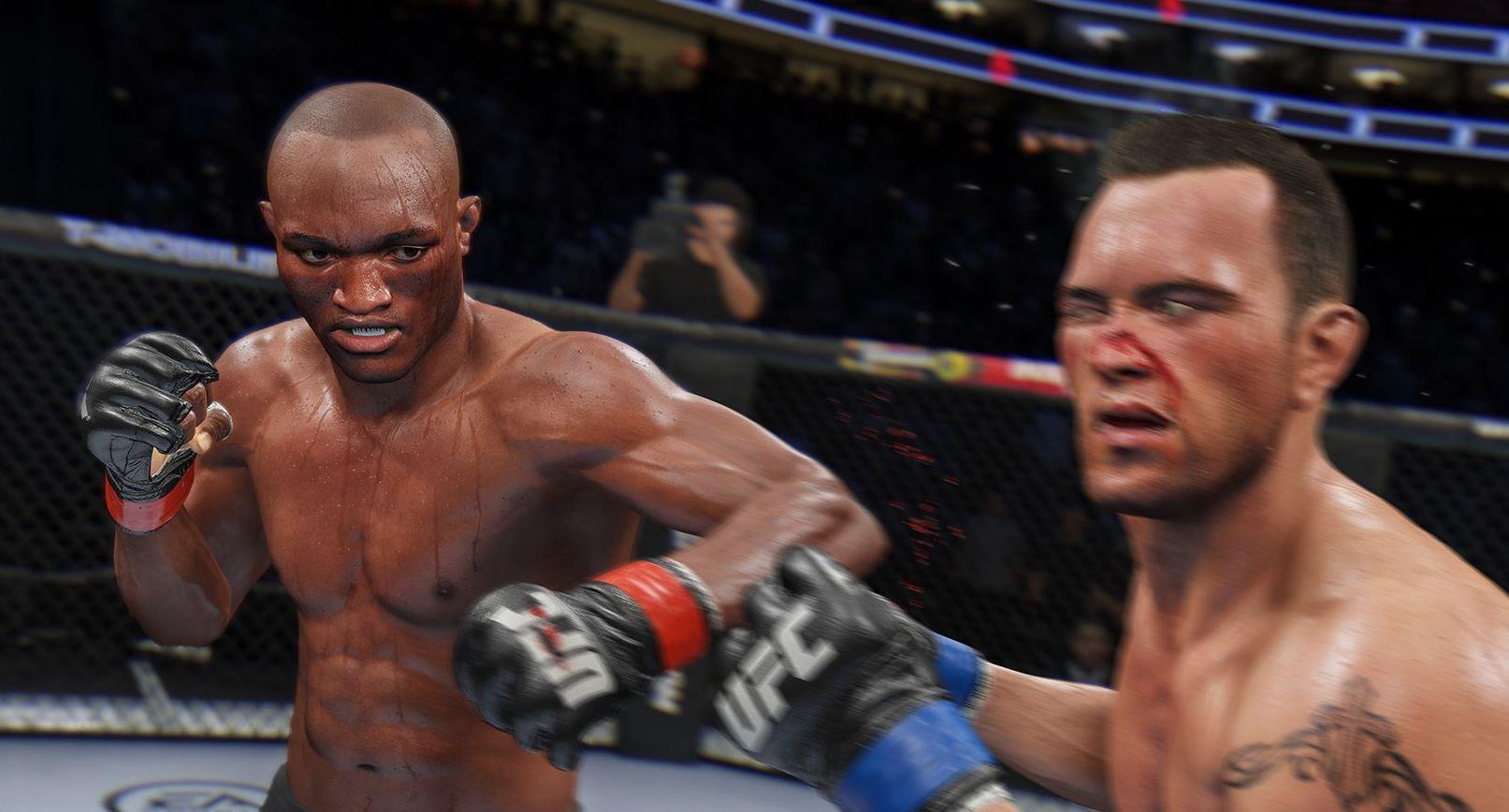 Now, one thing I do like is how you upgrade your fighter. This time around everything you do in the Octagon will raise your stats. So if you love to stand and bang with this first round KO's you will notice that your punches, hooks and overheads will start to level up. If you like taking it to the ground, your takedowns, transitions and submissions will level up.

Other than that, career mode remains the same. You have 100 points to spend each week. That usually revolves around hyping up your fights by simply selecting that you want to do autograph sessions or whatnot. But once again, there really isn't anything fun about this because you never actually see your fighter doing any of this stuff. You just get a popup on Twitter of your fighter saying, "Hey everyone, come get my autograph at this local restaurant." 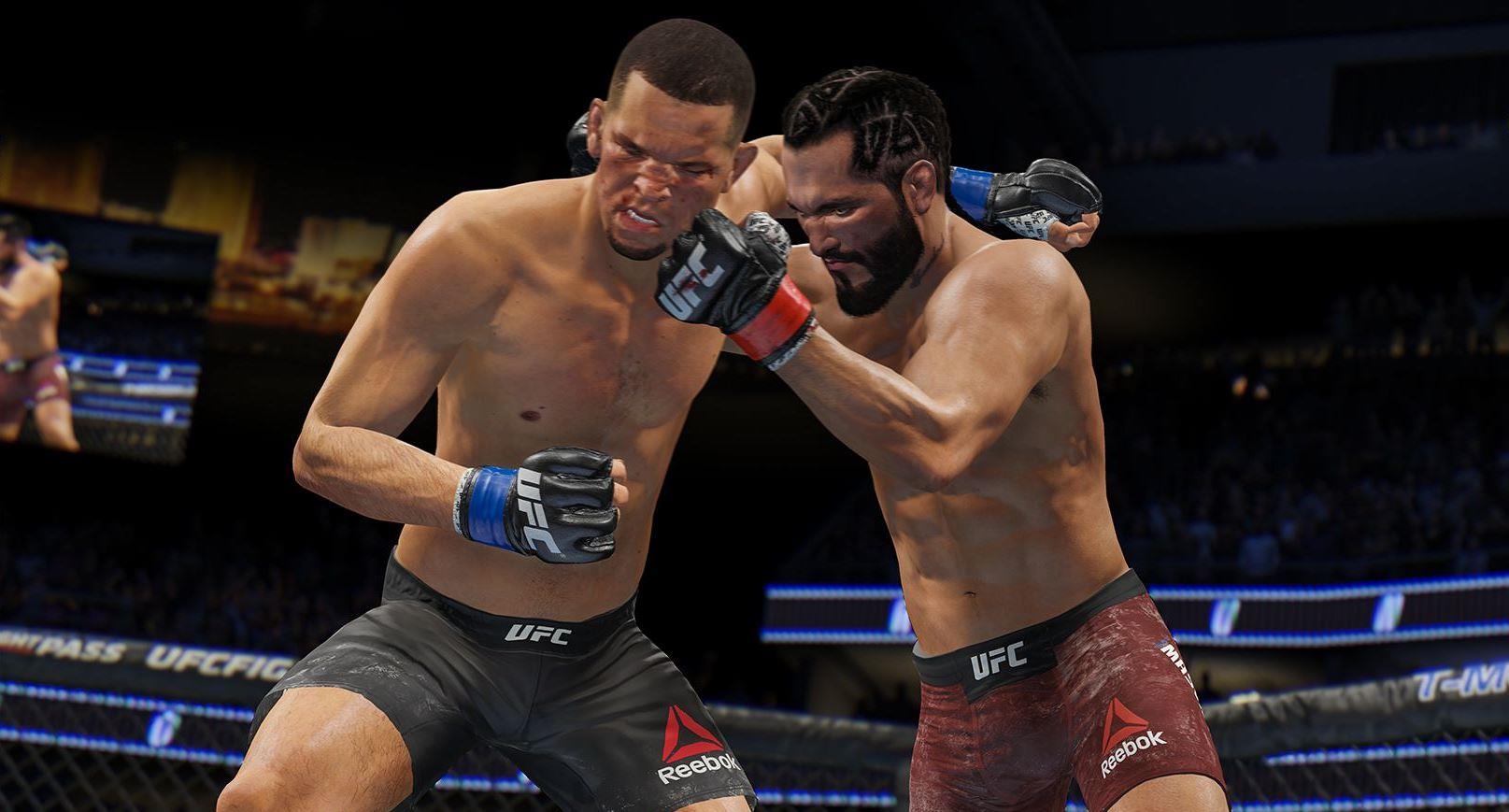 You can also spend your points on training. Doing so will let you play two-minute sparring sessions with certain objectives. If completed they will give your stats a boost. You need to be careful with this because as you level up you can get to the point where you can instantly knock out your sparring partners—which will lock you out of training until after your next fight.

The other disappointing thing is that once again EA basically bait and switched things like weigh ins and press conferences. In both UFC 3 and 4 they acted like these events would be a major part of career mode. But once again they are nothing more than short five- to 10-second clips that will play via social media as your next fight loads. 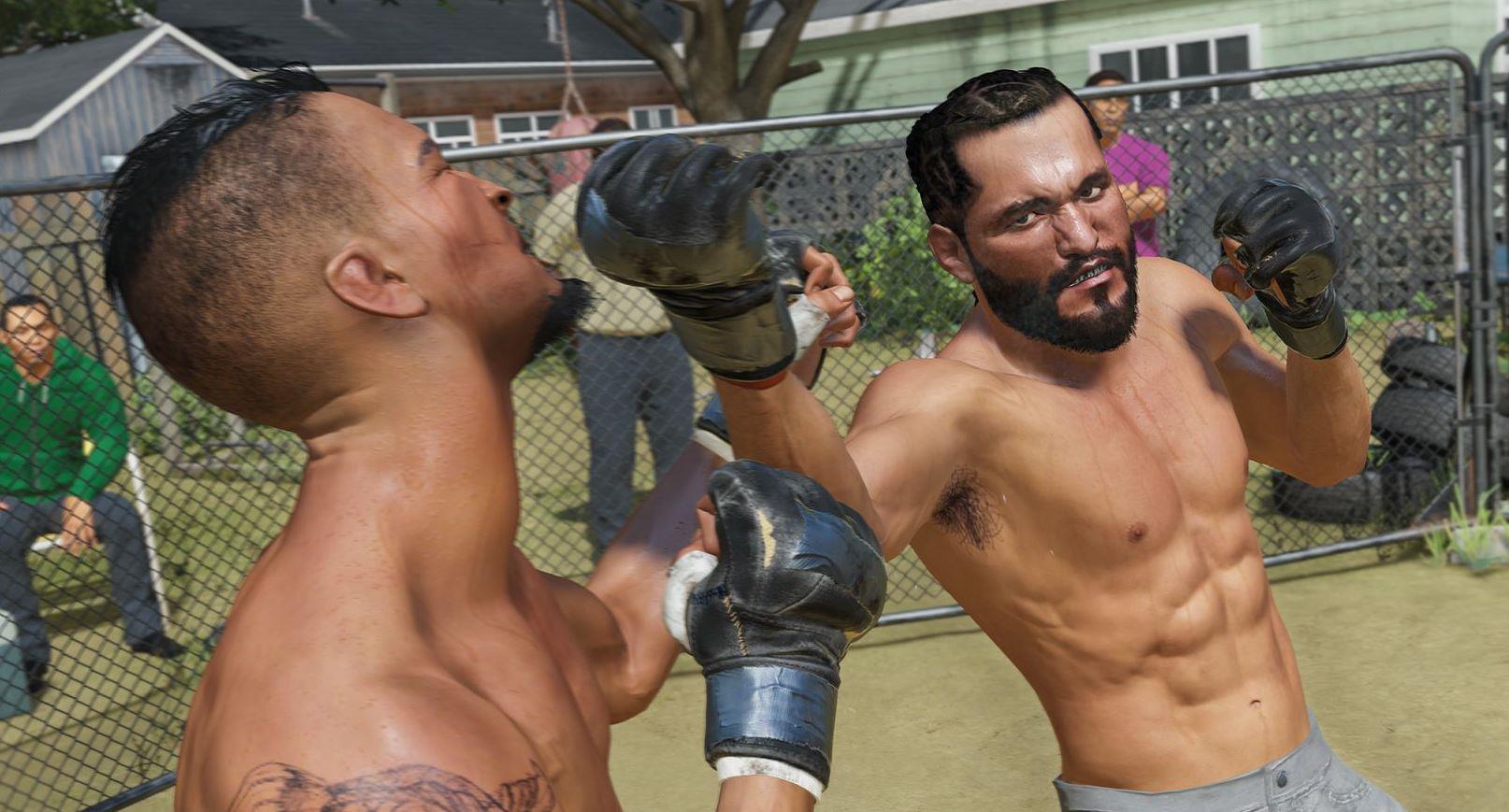 There are a few new game modes such bare knuckle, no holds barred, and backyard street fights, which was inspired by the cover star Jorge Masvidal. The other game mode is Kumite, which are fights inspired by underground fighting tournaments. Best way to describe it would be Mortal Kombat or the movie Bloodsport. Your fighters don new fighting gear and you even have a fighting game-style announcer calling the three round fight. Both of these game modes are decent additions for some alternate content. But after playing them a few times it starts to get old since they are essentially restricted to Knockout mode. 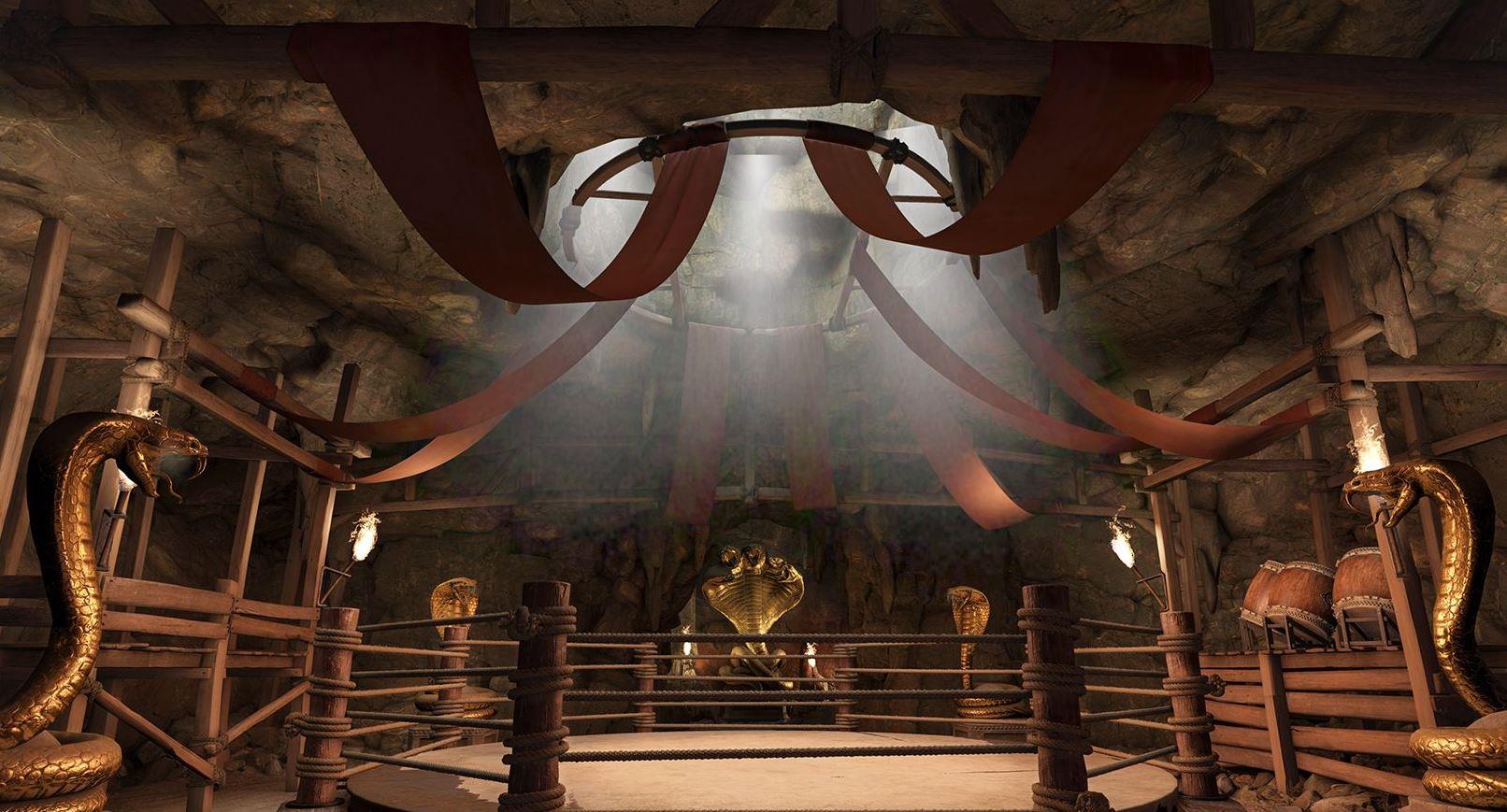 There is also a new online mode called Blitz Battles which is like a fast 64-man elimination tournament where all players are fighting at once in short one-minute fights. Every day they switch up the mode by setting it to different weight classes and game modes. One day it may be a Women's Bantamweight where the rules are stand and bang. The next day it may be Men's Heavyweight fighters in knockout mode. This mode is great and I found myself playing this a lot. I never won but it's fast enough that you can easily jump into a new queue if you lose and start fighting in less than a few minutes.

Now with the removal of UFC Ultimate Team, EA has added in tons of gear that you can earn and buy for your fighter. As you would expect, you can buy them with currency earned in game by completing daily and weekly challenges, or you can spend real money on microtransactions to buy them. The gear includes traditional martial arts attire like different fighting shorts and gloves, or you can go completely crazy and buy stuff like gold chains, helmets and other weird clothing. Personally I like the system and I didn't think that it took that long to earn enough money to buy the stuff you want.

EA UFC 4 improves on the fighting part of the game, which is important, but everything else really feels like the same old thing. Backyard fighting and Kumite is amusing in short bursts, and the new Blitz mode is fun for online play, but the biggest part of the game, the career mode, once again feels like wasted potential. EA UFC 4 takes a few steps forward but then takes the same amount of steps back leaving it about where it was with EA UFC 3. It's a shame since this is one of EA sports titles which isn't a yearly release. I was hoping for a lot more than this.

EA UFC 4 takes a few steps forward with the changes in the fighting game but takes some back as well with the career mode which was bait and switched once again and barely has any significant upgrades.