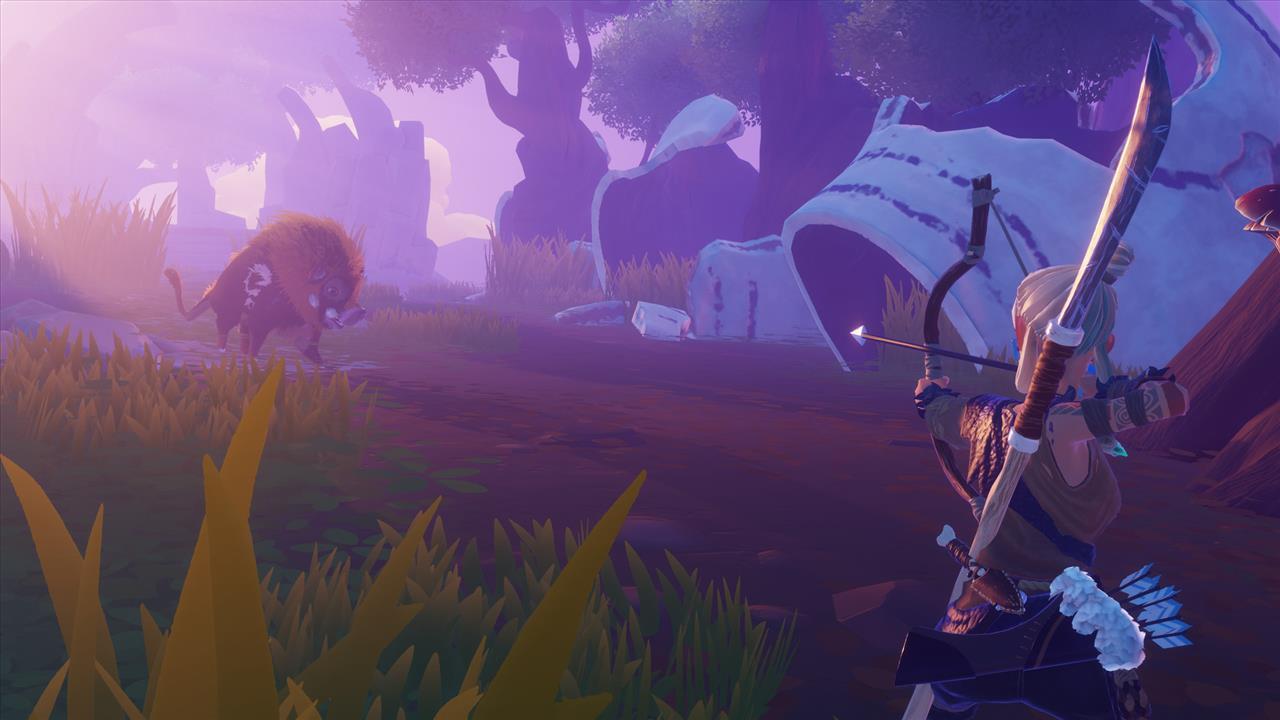 I ought to attest here: I’m not well versed on roguelike survival games. I’ve indulged in cooperatively hunting dinosaurs in ARK: Survival Evolved, yet the call for battling enemies while managing undercooked meat that’s leaving your intestines in knots has rarely been the engagement I’ve hankered for. Yet, Windbound enters at a strange time in tackling the genre, both for me and the Australian-based 5 Lives Studios. In both respects, we’re venturing into less-charted creative waters with turbulent seas; and the result is one of our seafaring vessel being scathed but ultimately staying held together.

You take control of Kara, a warrior of an oceanic nomadic tribe sojourning during a tremendous storm. Thrown from her raft, Kara sinks beneath the waves showing no sign of life. Suddenly—as though awakened by the gods, she’s teleported to the mysterious “Forbidden Islands.” Armed with an ancestral oar, a knife, and her intuition, Kara must unravel the mystery behind this ominous place and find a way home. 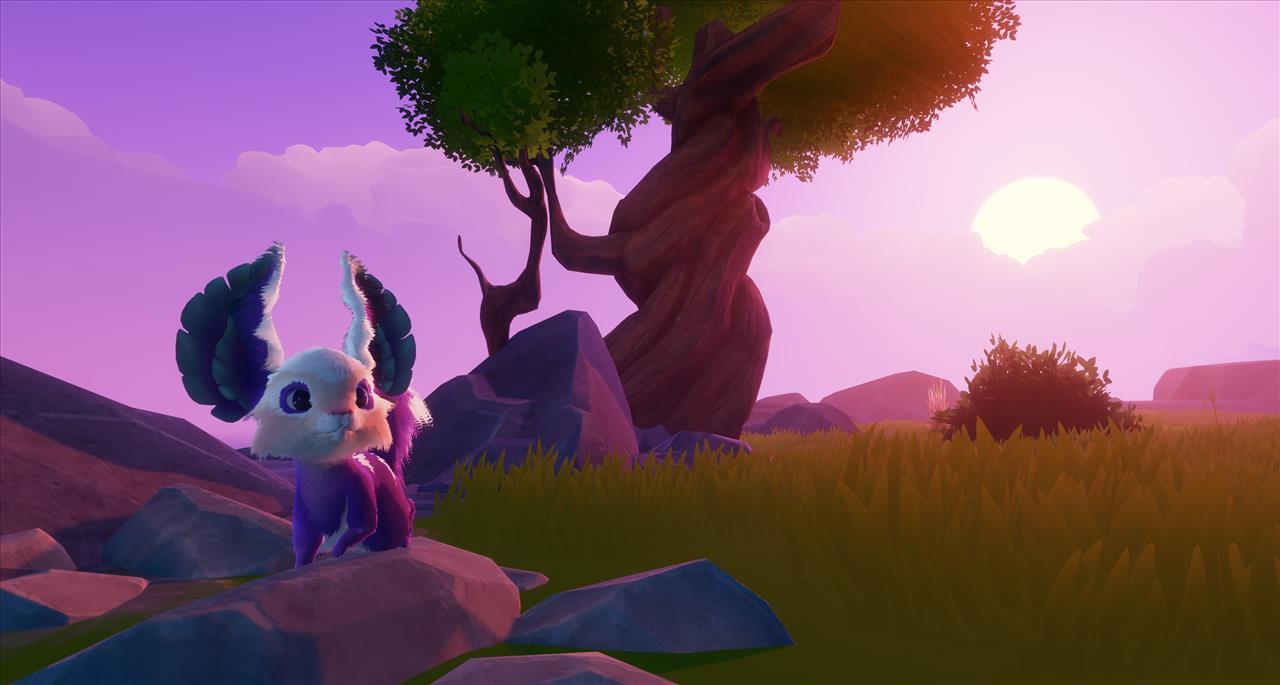 The beginning settles into something of a perfect middle between discoverability and tutorial handrails. You’re given hints about button mapping and your stamina's usefulness; alongside that, you'll witness how the smaller wildlife will react through heuristic observation. Boars can change from docile and scared to aggressive depending on if you've attacked their young. It's also effective in pacing out boating's integral ties to success. First you make a short swim from one island, then build a small canoe, and finally craft a nicer ship with a mast. This balance lends itself to the importance of each island, and implicitly suggests intentional design despite the world being procedurally generated.

Crafting plays an integral part in your survival too. Tools such as sharpened sticks may become bone-tipped spears, grass canoes can be outmoded by discovering bamboo to make ship decks, amenities like a campfire with a rack can be set almost anywhere, and on it goes. Even though there's an occasionally arbitrary demand to craft grass slings, which then means X number of slings are required in making another item, that roundabout way doesn't stifle the core loop of gathering resources. The segmentation of islands impels you of their importance too; like each hamlet has its own set of tasks for you to continue forward.

The UI layout and general adventuring ethos hits the expected queues—though with some subtle aesthetic tweaks. The health and stamina bars, D-pad hotkeys, and aiming reticle for slings and arrows visually communicate all the necessary information. Music shifts and visual cues for the varied wildlife is also well telegraphed. Aside from various items stacking on top of each other within the crafting menu, there's not much to complain about in this respect. 5 Lives put a lot of work into these dynamics of player comfort. 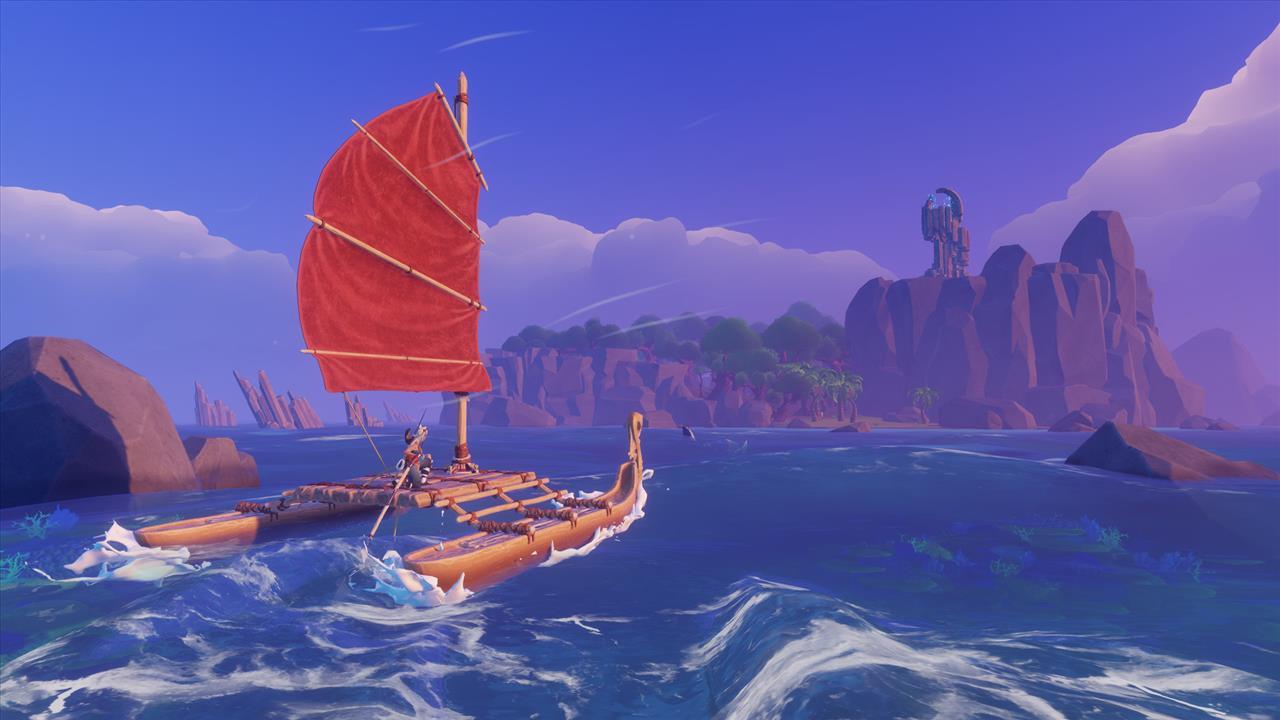 What's less comforting in comparison would be something that's a hot topic for the game: sailing mechanics. When you've gone past the simplistic canoe stage, the seas truly open up once you get your bottom raft, a deck platform above it, and a mast.  From there you can build it up with supplementary wings on both sides (with more masts). The contentions come not from the visual sense of progress but in the acting of cutting through the water. Sea of Thieves relies on easily translatable wind position for you to angle the masts; comparatively, Windbound's ocean gales are less precise and your sail’s tightness/looseness also comes into play. But these complications are borne from a disparate design philosophy, instead of being an unfinished mechanic. The need to constantly gauge your positioning and mast control, along with avoiding coral reefs that damage your skiff, can sometimes net interesting results, like when you're balancing with just a bamboo deck and mast after your raft was obliterated against some rocks.

Where I fall more critically would be the combat. As Eric said, don't come in expecting Breath of the Wild's sophistication. The ebb and flow between most animals is target-lock, dodge their strikes, sneak a couple hits in, rinse and repeat. There is a stealth element as well, but most animals' detection system is far too uncoordinated. A special cloak with a stealth buff enabled me to dictate terms of detection, resulting in spamming critical arrow shots with little recourse from my prey. Melee dawdles the line between functional and clumsy because of wonky collision detection. Spear thrusts after a dodge not registering just happened too frequently to ignore.

All of these mechanics, between boating, crafting, hunting, wouldn't do much without a larger goal. To move forward, Kara is required to climb to the top of what’s essentially three Ubisoft towers in each chapter. Success in this nets you the in-game currency, sea shells, and a quick monologue snippet about Kara's tribe. Each tower essentially acts like a key: reach all three to open the pathway to another realm. And as the chapters progress, the towers' spread & predictability gets tougher; in turn, islands without them present opportunities to learn more story or find a health and stamina upgrade shrines. 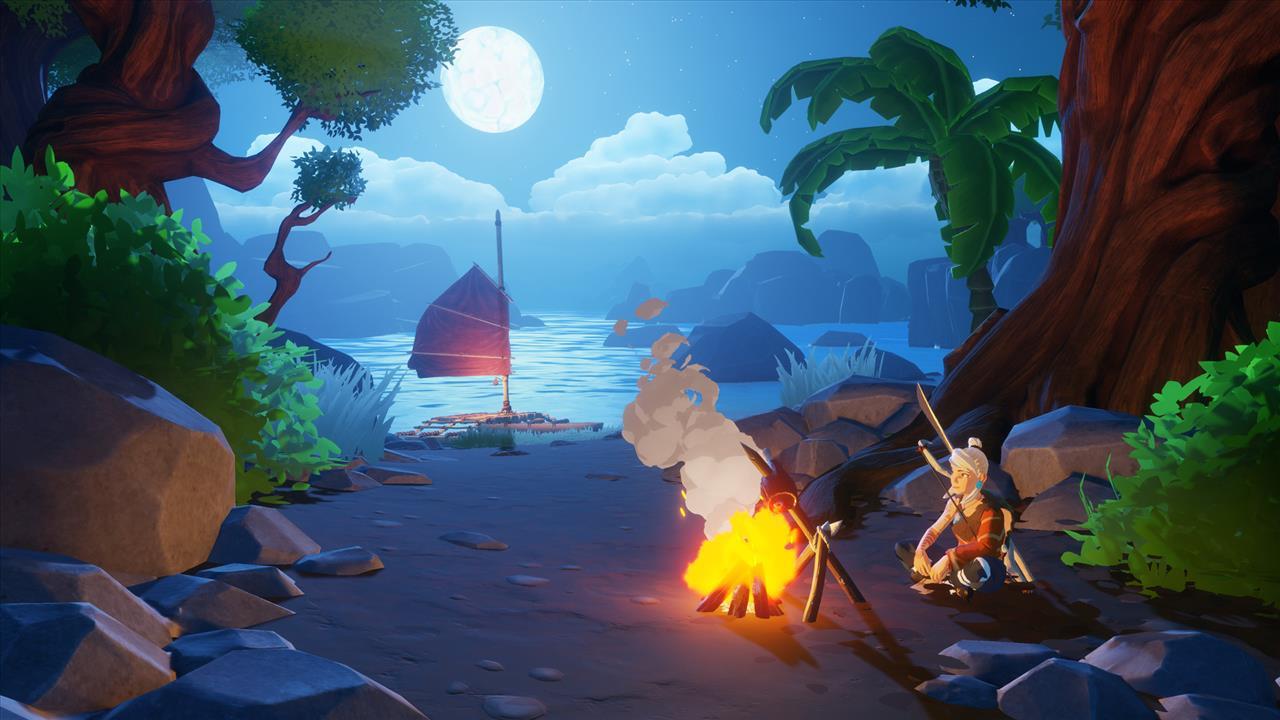 In sum, Windbound's gameplay keeps me tantalized because it manages to make venturing to and fro crucial for success. Less a resource manager's need for a set amount of wood for the night and more about finding the bare necessities on one island to move forward. Progress and setbacks feel more palpable as your nomadic lifestyle would suggest. Perhaps that's what made me more excited to reach completion.

Even if the gameplay's execution is uneven, the art style is consistently pleasing. The grandness of the ocean is slightly limited by the field of view, but details like the lapping waves, the soft-texture look to everyone, and the cotton-candy structure of campfire smoke plumes are truly impressive for a game of this budget. The modest bestiary houses some good creature designs too. Some may be curious how much latitude one can get with a bunch of tropical islands. The answer: quite a few in visual palette and tone. Bar none, visuals are Windbound's greatest asset.

Sound is a modest highlight in comparison. Although traveling by sea is musically rewarding by composer Fyrosand, the original soundtrack on repeat can drag over time. The combat music will inconsistently start and stop at times (see combat complaints from earlier), but it still fits tonally when it works. Sound design brings meaningful texture both on and off the sea. Since there's no voice acting, sound mixing when story bits are dumped succeed in calling your attention to the grander context around you. The various aural elements click together to sell this lived-in ecosystem; a fantasy rendition of uninhabited Caribbean islands.

Whereas sights and sounds may feel textured and full bodied, the semblance of a grander narrative plays too much in the background to feel worthwhile with its modest five- to six-hour runtime (on Storytelling difficulty). Sometimes just stumbling upon a specific outcropping or rundown hamlet presents background text on your screen, occasionally when in combat too. The 'epilogue' to each chapter reveals a set of gold-plated hieroglyphs for you to decipher, of or relating to an ocean deity. It's aping the opaqueness of something like Abzû or Submerged, yet it never connects to the same degree. Perhaps that's the point: an intrinsic nature to being a nomad suggests your legends aren't as well defined as settler counterparts, but only serve as malleable spiritual inserts to your present need for survival.

Regardless of where I land on specific design decisions with 5 Lives' newest game, I can't deny my extensive admiration in them charting their own course. Although it aesthetically aims at modern Legend of Zelda titles, Windbound gravitates towards normal survival-adventure trappings with instinctual investment in the nomadic lifestyle. Although this kind of design and energy can seem...too specific for some players, it's with appreciating those nuances I can't help but give a recommendation.

More enticing systemically than it is narratively, Windbound nevertheless succeeds as a sojourner's adventure of striving for survival and greater understanding. 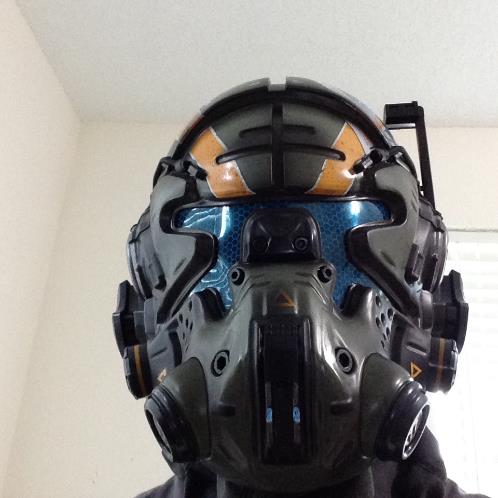