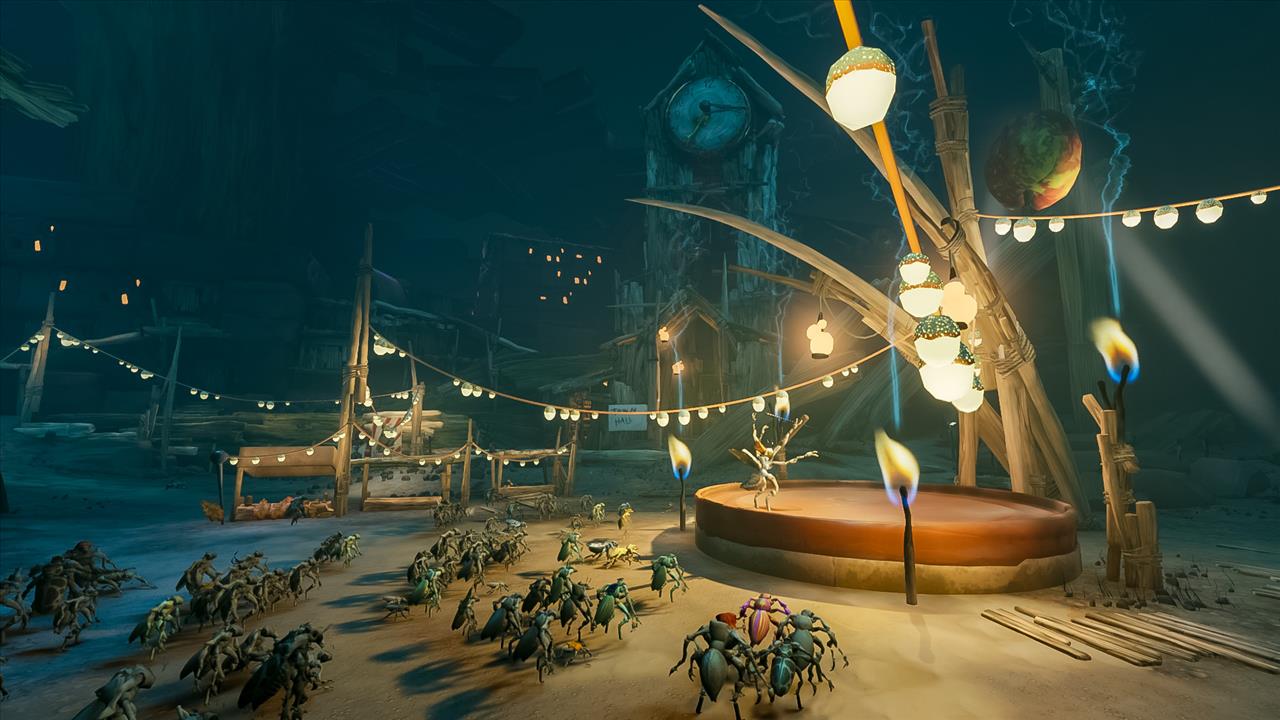 I’m a voracious reader, but I’ve never made time to become familiar with the works of Franz Kafka. I’ve read The Metamorphosis, of course, mostly because I was perversely curious about it after viewing a mid-90's film version of the story. But playing Metamorphosis, the stellar new puzzle-platformer from developer Ovid Works and publisher All In Games, I’ve been inspired to seek out more information on Kafka’s body of work. 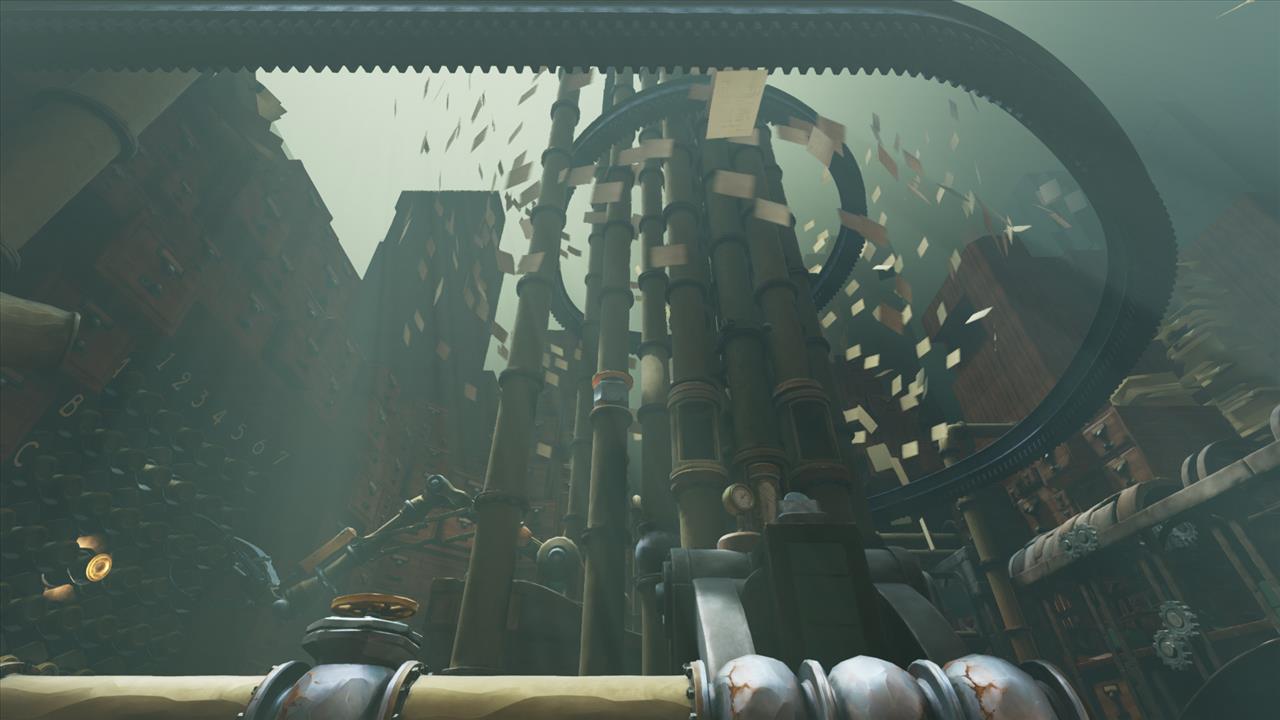 Metamorphosis (the game) does not follow the novella. Instead, it engages the player in a three to five-hour tour of Kafka-World: a virtual amusement park of dry wit and disheartening bureaucracy. I’m not saying that Metamorphosis contains a literal amusement park, but the sense of delight that I felt playing the game rivaled the feeling of rounding a corner at an amusement park and seeing something amazing. This game is visually stunning at times, and more than a little bonkers in its storytelling—leading the player through a tale that borrows liberally from not only The Metamorphosis, but additional Kafka novels like The Trial and The Castle.

In my research, I was surprised to learn that most of Kafka’s most famous works were left unfinished by the author. Upon his death, Kafka instructed his lawyer to destroy his unpublished books. The lawyer, in true Kafka-esque fashion (lawyers are part of the system, and are therefore not to be trusted), utterly ignored him and published the books. His betrayal of trust should probably be forgiven, for had he not acted as he did, the world would have lost out on the majority of Kafka’s work. Since Kafka left most of his work abandoned and unfinished, most of his work seems to slam suddenly to an end—a concept followed merrily by this video game adaptation. 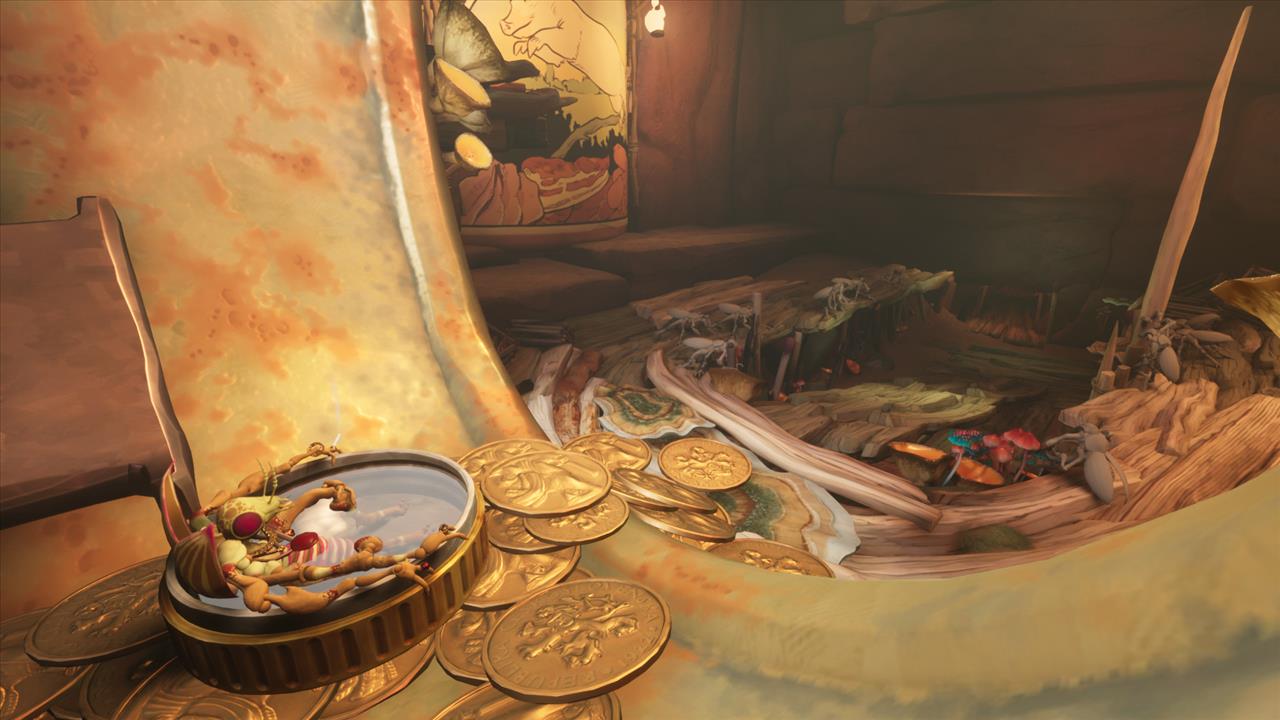 Players take on the role of Gregor Sansa, a travelling salesman bunking down with his buddy Josef. One morning Gregor wakes up, and promptly metamorphosizes into an insect. Unlike the original novella, Gregor doesn’t become an insect the size of a human. Rather, in a bravura sequence, the world around Gregor grows to mammoth proportions as he shrinks down to insect size. Gregor reacts to this trans-genus mutation with a complete lack of panic, simply setting out to discover what steps he needs to undertake to recover his human form.

As Gregor explores Josef’s apartment from a bug’s perspective, things progress from realistic to decidedly trippy. Gregor encounters hundreds of other bugs on his journey, many of whom seem to have once been human. These witty compatriots eventually steer Gregor on a convoluted route towards “The Tower,” a looming structure that can sometimes be glimpsed in the background of some of the more esoteric scenery. 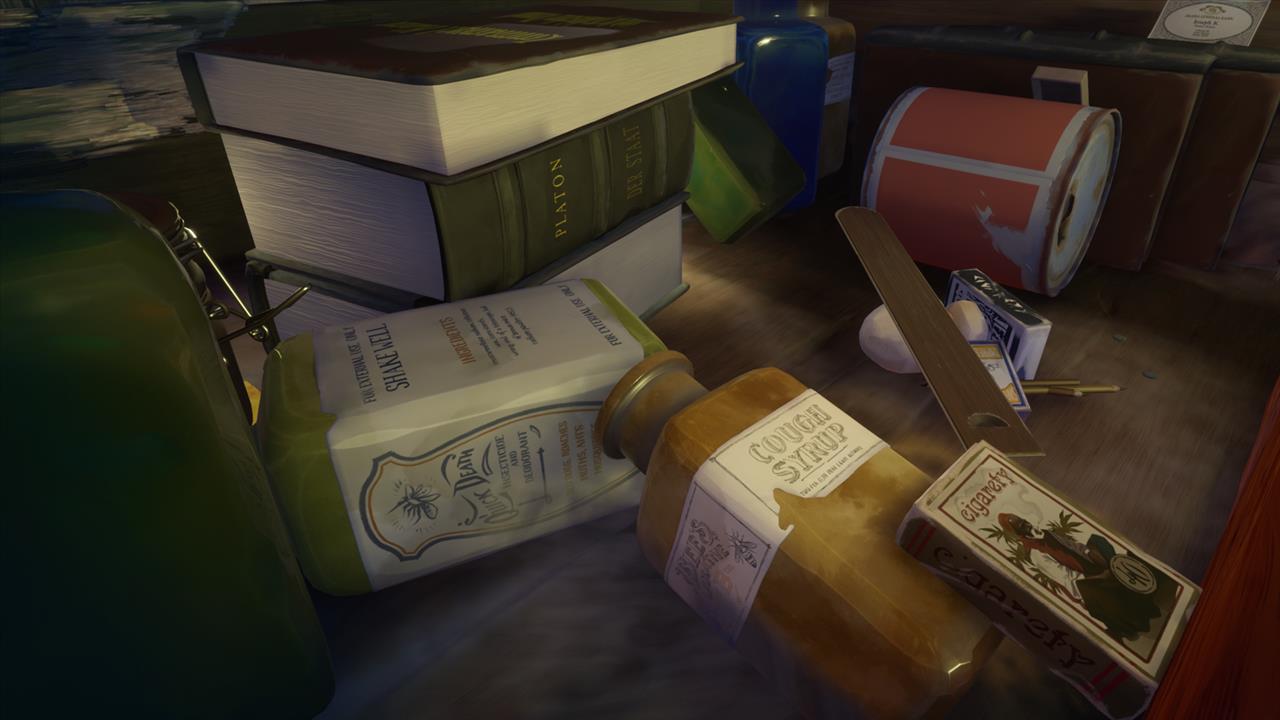 As he progresses in his quest to reach the Tower and regain his humanity, Gregor wanders between the more realistic setting of Josef’s apartment and the secret world of insects hidden in the nooks and crannies of the human world. The transitions between these areas are decidedly hallucinatory, with Gregor often being whisked away to the next destination by mysterious means best thought of as narrative magic. Hallways elongate and stretch on for seemingly miles. Pieces of paper float out of the air to whisk Gregor to his next destination. At one point, Gregor takes a flying boat through a bug city. Like I said, trippy.

In the realistic segments, Gregor is often trying to reach a goal or accomplish a task while giant humans loom in the background. These humans carry on chattering circuitous conversations, moving the surreal story forward in its Wonderland nonsense-logic manner. Conversations with bugs actually become far more lucid and concrete than these human interactions, with insects offering Gregor real advice and guidance—with a surprising amount of wit and humor. Metamorphosis is deeply amusing for a game about an oppressive and formless power structure lording over the innocent souls caught in its labyrinthine structures. The oppression is there, but it comes with a side of jokiness that keeps the game from becoming a slog.

Most of Metamorphosis is played through some extremely well-done platforming. Every destination is a challenge, with Gregor (and the player) figuring out how to reach far off places, solving puzzles along the way. I think of Metamorphosis as a puzzle-platformer, but there is a fair amount of adventure game DNA mixed into this concoction. Gregor often has to figure out which widget goes where, and in what order. None of these adventure-style puzzles are too tough, and they slow the player down just enough to cause them to linger in some of Metamorphosis's beautifully drawn environments.

Being a bug, Gregor can only interact with small objects in very non-direct ways. He has a very basic move set: walk, jump, run. But Metamorphosis still manages to get quite a lot of mileage out of forcing a bug to walk across a desk. Gregor can manipulate spinning wheels by walking on them, impacting a variety of mechanical devices. He can step on balancing objects to seesaw them into other positions. He can jump on buttons to depress them. 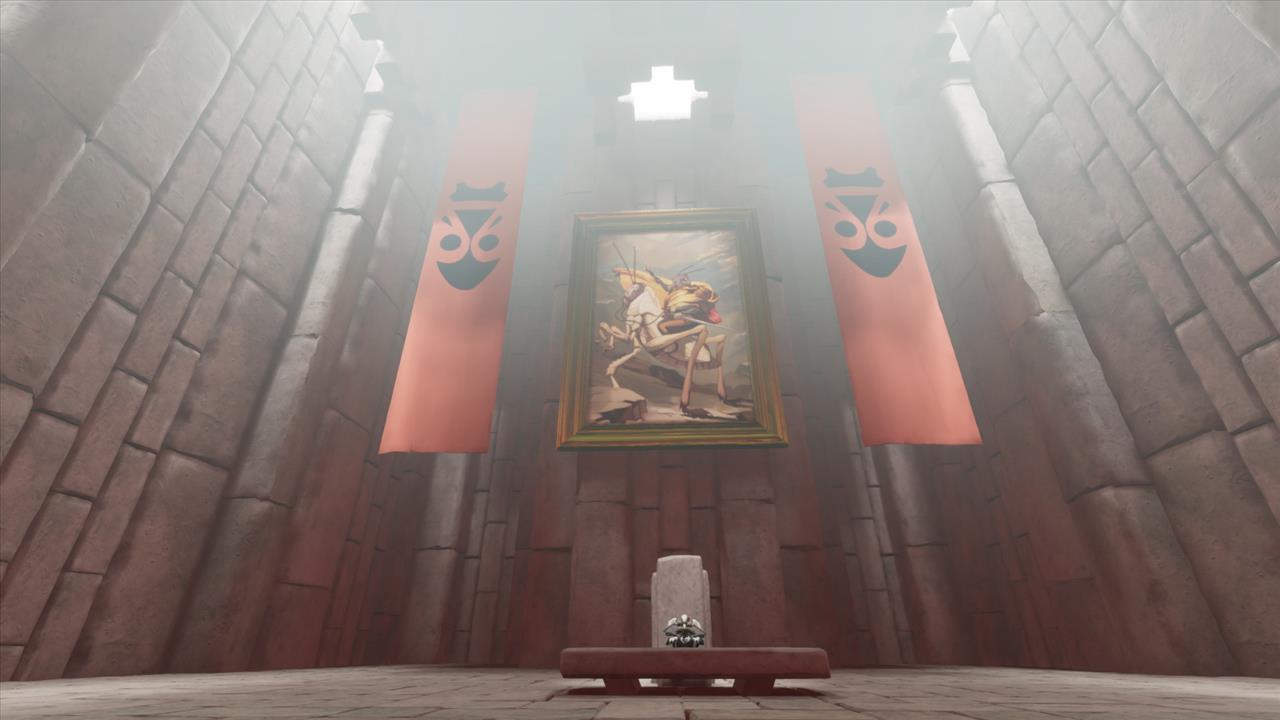 One interesting mechanic involves Gregor walking through glue or ink spilled in the environment. Normally, he can walk up sharp inclines, but with glue on his legs Gregor is able to go completely vertical, allowing him to reach previously unattainable areas. The glue has limited use, however, so Gregor must decide where and when to use it. A simple resource management problem, but in practical terms it pushes players to come up with some fairly ingenious paths. Try to push it too far, and you end up tumbling back down, possibly to your death.

Failing is never terribly punishing, as a tumble from a height or getting squished will instantly set the player back to the most recent checkpoint. I have no idea how this game handles its loading, but other games should take note. Not having to wait for a load screen after dying is delightful.

Metamorphosis is filled with some wondrous sights, from a bug nightclub housed inside a Victrola to an entire bug city built around an old film projector. The way this game uses everyday objects to construct platforming environments is inspired, and the resulting visuals are shockingly effective. Over and over again, I would wander up to an object and think “Oh, that’s so cool.” The artists and designers behind Metamorphosis have done stellar work here.

Metamorphosis is enjoyable from beginning to end. Taking rather dour source material and converting it into a lively and amusing game with solid mechanics, Metamorphosis has indie hit written all over it. Though the game can be played in one or two sittings, there is enough originality and fun here to justify a purchase.

Metamorphosis is a solidly made puzzle-platformer with a few adventure mechanics on the side for good measure. Taking a literary classic that some consider to be interminable and creating a lively and amusing game world from it, the devs at Ovid Works have create a deeply creative work that delivers a satisfyingly original experience.