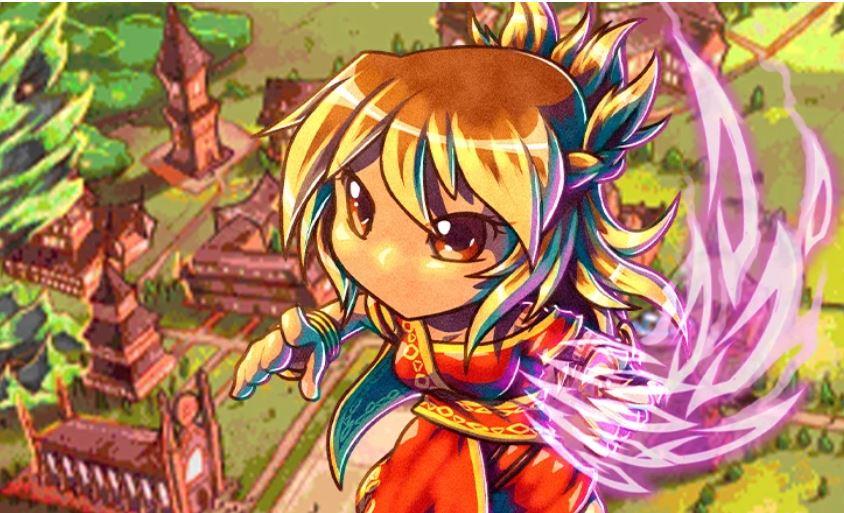 Level 99 Games has been putting out physical games that simulate video game mechanics for years. A quick browse through the company’s website reveals tons of interesting stuff; Empyreal: Spells and Steam – a mystical train-building strategy title. The Exceed Fighting System – a card-based fighting game simulator, and of course Pixel Tactics – a long running series of games that allow players to engage in RPG tactics-style battles.

Branded as an “Expandable Tactical Card Game,” Pixel Tactics has five primary editions on the market, along with several collections, deluxe editions, and even a few Megaman branded versions. Level 99 sent Gaming Nexus a copy of Pixel Tactics 4, and though it took a while to come to grips with the mechanics at play, I eventually settled in and found Pixel Tactics 4 to be a fun and strategically deep one-on-one card game.

The advertising copy for Pixel Tactics states that Pixel Tactics is “simple to learn but complex in depth.” I agree with the complexity claims, but have to say that I did struggle to learn the intricacies of the game. Instructions come in the form of a dual-sided poster filled with some fairly dense information packed onto it. In the end, I had to read the entire poster, watch a couple of videos, then read the poster again before I felt confident enough to try to lead another player through the game. Even then, we had to play a few open-handed practice rounds to smooth out the edges before we could start playing in earnest.

Its not that the game is overly complicated – the level of complexity once you get up and running is moderate. But jumping into Pixel Tactics on the fourth iteration might have been a little ill-advised. I’m pretty sure that we would have had an easier time starting with the base game. It only stands to reason that the cards included in this fourth set contained mechanics more complex than those in the original version.

Indeed, some of the mechanics referenced on cards are not explained anywhere in the instructions, clearly leftover aspects from earlier versions of the game. It also feels like some of these cards are very overpowered without being played in the context of previous decks. Even so, we are able to muddle through to a general understanding as to how things work, and achieved a modicum of comfort with the flow of the game. 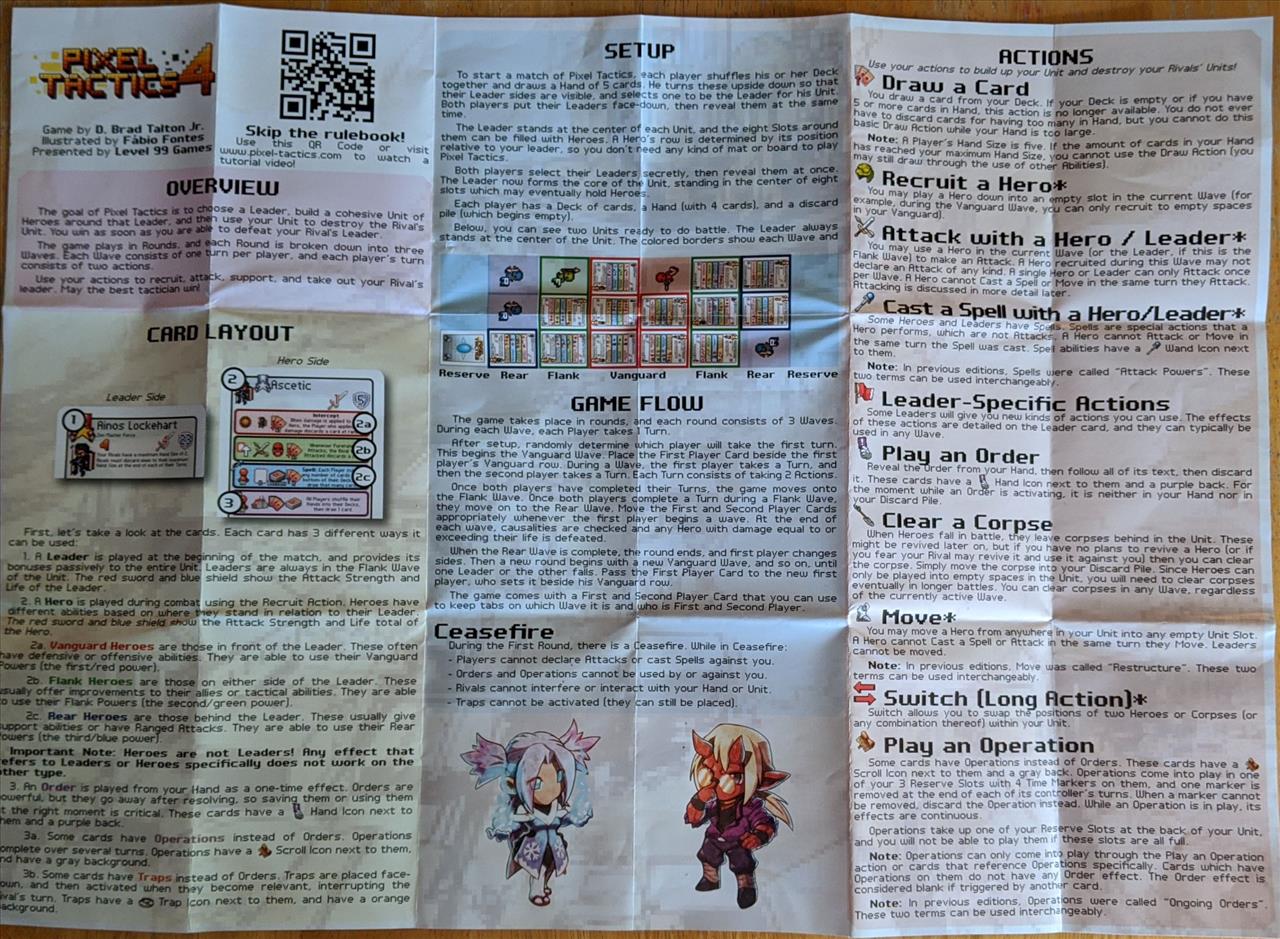 Pixel Tactics 4 comes with two complete identical decks of cards, one for each player. Each card has one hero and one leader printed on opposing ends. Depending on which way the card is facing, either the hero or leader is in play. Players draw five cards, and from those five, they select a leader, laying him in the center of their play area. Leaders have a specified attack and health value, and they all contain special powers that change the way you will play your hand.

Though Pixel Tactics 4 doesn’t come with a play mat, I hurriedly made one using printer paper the first time I played. After everyone understands the flow of the game, it is less needed, but beginning players will want to take this step for sure. 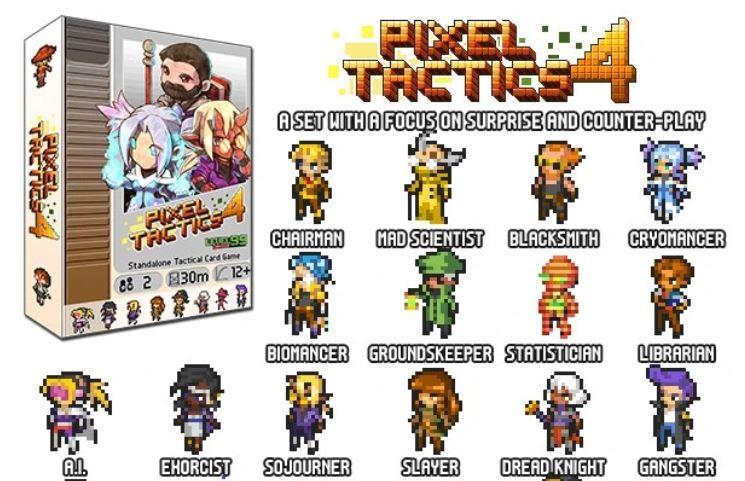 As you recall, every card has a hero printed on it. Once your leader is selected and laid down, all of the remaining cards are considered heroes. Each hero has a number of powers printed on the card, triggered by which row the hero is played in. For example, take the hero known as “Gangster.” If you play him in the Vanguard row, he has the power to “Intercept,” basically taking damage intended for characters played behind him. If you play him in the Flank row, he gives all of the heroes in the Vanguard row Intercept powers – arguably a more powerful move. If you play Gangster in the Rear row, he gives all of your Vanguard heroes +1 attack strength. So each card has a number of different ways it can be played, some more desirable than others.

This adds up to a ton of information being printed on these playing card-size cards. To get all of these various abilities squeezed onto the layout of these cards, Level 99 had to use some pretty tiny print. Being an old guy, I had to take my glasses off and squint a bit to figure out what was what. Just a personal thing, but one that potential players should be aware of. Cards are of a standard quality and thickness, and some decently thick cardboard tokens are included to track damage. 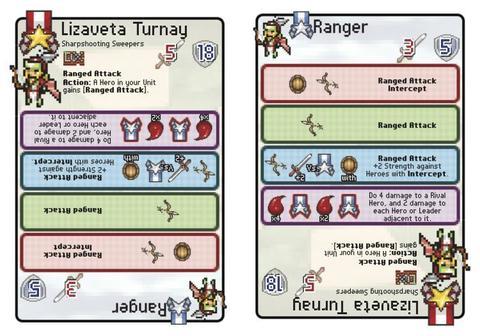 The flow of the game has players first laying cards in the Vanguard row. After both have taken a turn, play moves onto the Flank row, then the Rear row. At the end of all three rows being played, battle commences, damage is tallied, and the process begins again. There are a number of different actions that can be taken on a player turn beyond laying cards, but the core of the game is about determining which characters to lay in which rows, and how they will work together to destroy your opponent’s leader.

As I mentioned above, this is the fourth edition/expansion of Pixel Tactics, so some of these cards are devastatingly powerful if played correctly. During our second game, my son accidentally discovered a card combo that allowed him to either take or instantly destroy any card I laid down. This effectively ended our game, though I gamely played through to the end so he could have the satisfaction of cackling at me as he countered every futile move I tried to make. Every game after that became a race to see who could set up that same combo – though we quickly discovered ways to counter each other to prevent a repeat of that destructive power.

These days, we are generally able to get through a match of Pixel Tactics in about 20 minutes, so we tend to go for two out of three to determine a winner. Once we got the hang of things, we revisited Pixel Tactics over and over again. Like any card game, things heat up and get a lot smoother once you have the cards (and the various abilities on them) memorized.

In the end, my son and I decided to order a copy of the original Pixel Tactics, as we felt that playing the fourth expansion was akin to jumping into the deep end of the pool. We eventually worked through it, but we could have easily drowned beneath the complicated mechanics in place. We’re going to take a crack at the game that started the series, and I must admit that I’m intensely curious to see the differences at play between the first and fourth editions.

Regardless of the difficulties in getting started, Pixel Tactics is a great game for tactical RPG fans. The character design is spot on, and players will likely enjoy discovering combos in the heat of play. Just be ready to spend a bit more time than you might expect getting started.

Pixel Tactics 4 is an entertaining 1v1 tactical card game. Simulating a tactical RPG video game quite well, the various powers and abilities at play can combine in surprising and powerful ways. Just be ready to do a little side research to uncover how to play, as the instructions included are rather dense. While Pixel Tactics 4 is viable on its own, starting with the base set then expanding from there is advisable.