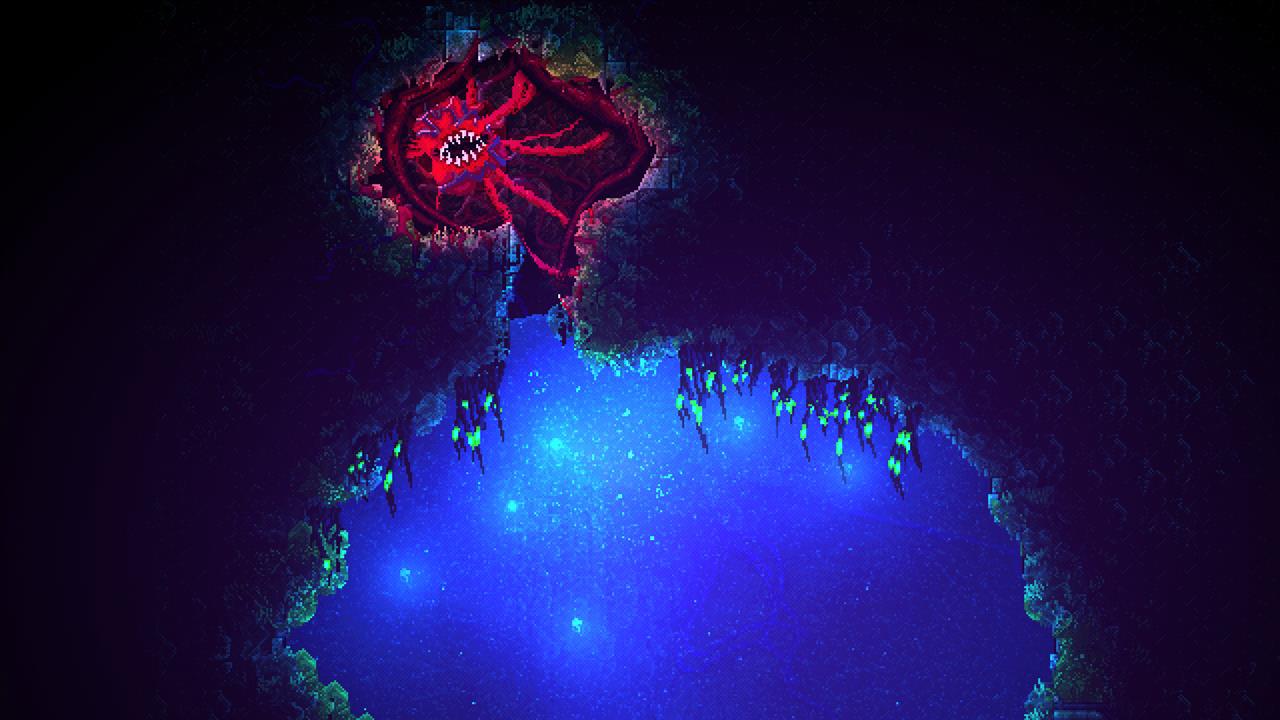 I have always been fascinated with games that let you be a monster. Free of the constraints of narrative ethics, you become a survivor, unclouded by fear, remorse, or delusions of morality, as the android Ash put it so chillingly in the original Alien.

Appropriately, 1999’s Aliens vs. Predator by Rebellion is one of my favorite games, specifically its Xenomorph campaign. Rebellion did something amazing with light, shadow, stealth and color in the level design that made you feel like an animal guided purely on instinct. The terrified cowering humans were merely food, or threats to bypass and eliminate. 2019’s Ape Out had a thin plot about animal cruelty, which enabled the glorious, percussion-fueled rampage of an escaped gorilla across labs, skyscrapers and military bases. Again, there was no pretense toward morality in Ape Out; survival was your only concern. It’s also why I felt Rockstar’s Manhunt was a pretty disappointing stealth game once you got past the shock value. Despite framing you as a serial killer up against even nastier serial killers, it was just trying too hard, too edgy, and the gameplay itself was half-broken and tedious.

Phobia Game Studios falls into the same camp as Ape Out and Aliens vs. Predator with their new title Carrion. Billed as a reverse-horror game, I’m thankful that they’ve put a name to this fairly uncommon genre. At its core Carrion is a Metroidvania game, a 2D exploration-adventure. Unlike the majority of the Metroidvania genre however, you aren’t a lonely, isolated explorer beset on all sides by monsters. You are the monster, a horrifying amalgamation of flesh, tentacles, eyes and teeth contained in a research lab buried deep underground. 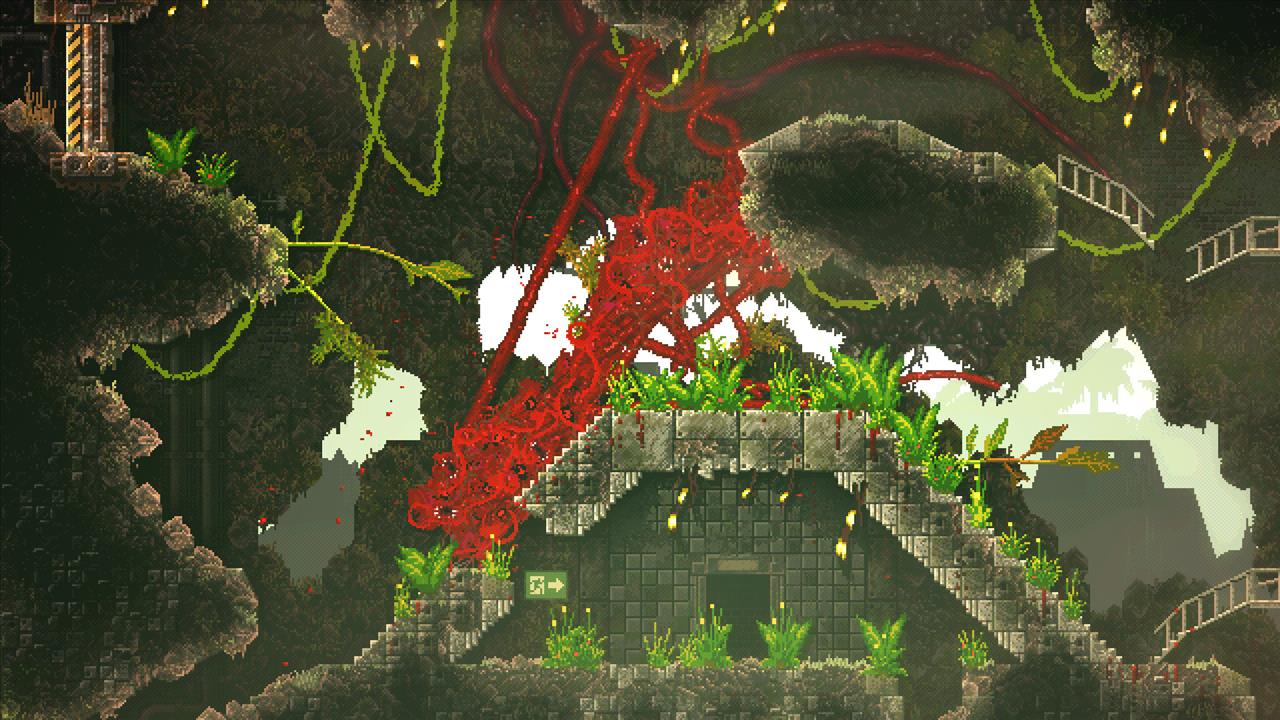 God knows why you’re there or what the scientists have been doing to you, but your only goals are clearly escape and survival. This handily removes any moral quandary about murdering everyone as you leave a trail of havoc on your way to freedom. It’s the Cronenberg-Carpeter team-up sequel to The Thing that we’ve always dreamed of but never got.

Upon picking up a controller I was struck by how effortless it was to control this blatantly unorthodox “protagonist.” The creature oozes and slithers through the lab with frightening speed and fluidity, compressing and stretching to fit through small spaces and reaching out with grasping feelers to adhere to any surface. 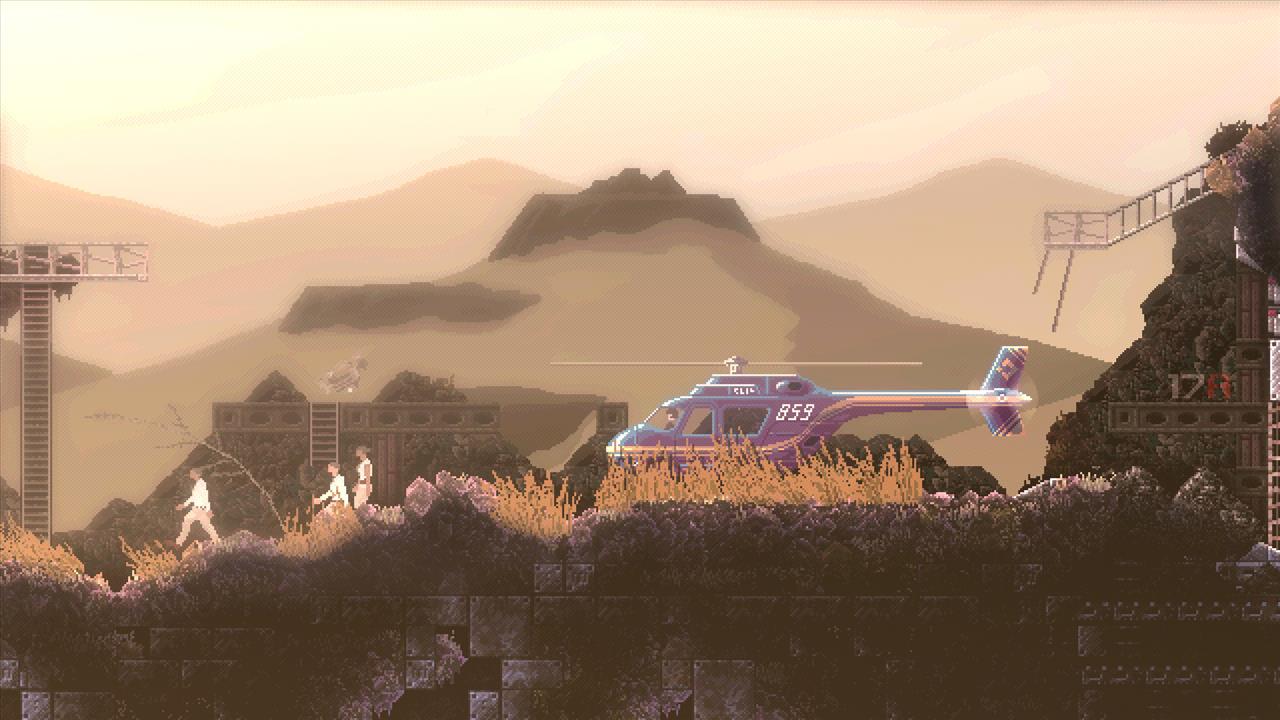 While most Metroidvanias restrict the player through the use of verticality, placing tantalizing items and progression just out of reach until the player gains a new mobility upgrade, Carrion is more clever in its level design. The creature is not impeded by verticality—it doesn’t jump so much as climb like some ghastly twisted Spider-Man—so the lab’s many lockdown systems and security measure are the main obstacles.

The main thrust of the gameplay is using the creature’s abilities to bypass these lockdowns. You start with only a small amount of biomass and no special abilities, but as you breach other containment vessels you acquire new powers, more mass and passive buffs. At the beginning these are simple; webbing to shoot through crevasses to flip switches or snare enemies. Eventually you gain the ability to become invisible, smash through makeshift barriers with brute force, grow deadly spines and even protect yourself with tough keratin. The catch is that you can’t have all of these abilities at once. Most of them require energy to use (which you can recharge by draining fuse boxes), but even then you have to be the right size. 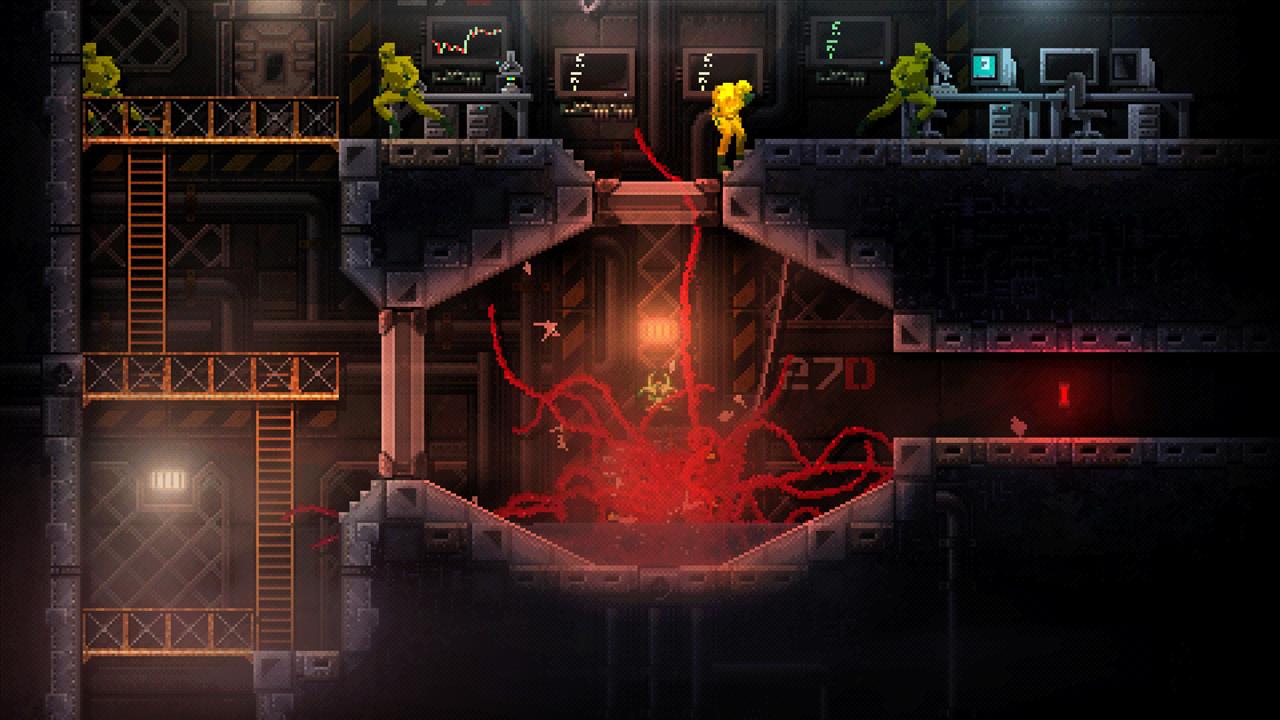 The creature starts off small but as you gain upgrades it also grows in size, which also boosts hit points. The problem is that specific abilities are only available at each size; you can only use webbing or cloaking when you are smallest, for example. This means you must deposit biomass, and the corresponding HP, in special pools of red liquid in order to progress. You can retrieve this biomass later but in order to bypass security you’ll need to operate at a diminished capacity.

Of course you can also gain mass by eating people, which is kind of what monsters do. I’ll give Phobia Studio a lot of credit here—they’ve absolutely nailed the aesthetic of '80s horror movies with this thing. You can reach out and grab hapless scientists and soldiers with a tentacle and then munch on them, regaining HP and, in the case of armed humans, eliminate a threat. The horrified screams of these people as you drag them into one of our many mouths is chilling, especially when they are abruptly cut off by the sound of crunching bone. It really makes you feel like some unfeeling hungry abomination from beyond the stars. I have a feeling Sam Raimi would really groove on this game. 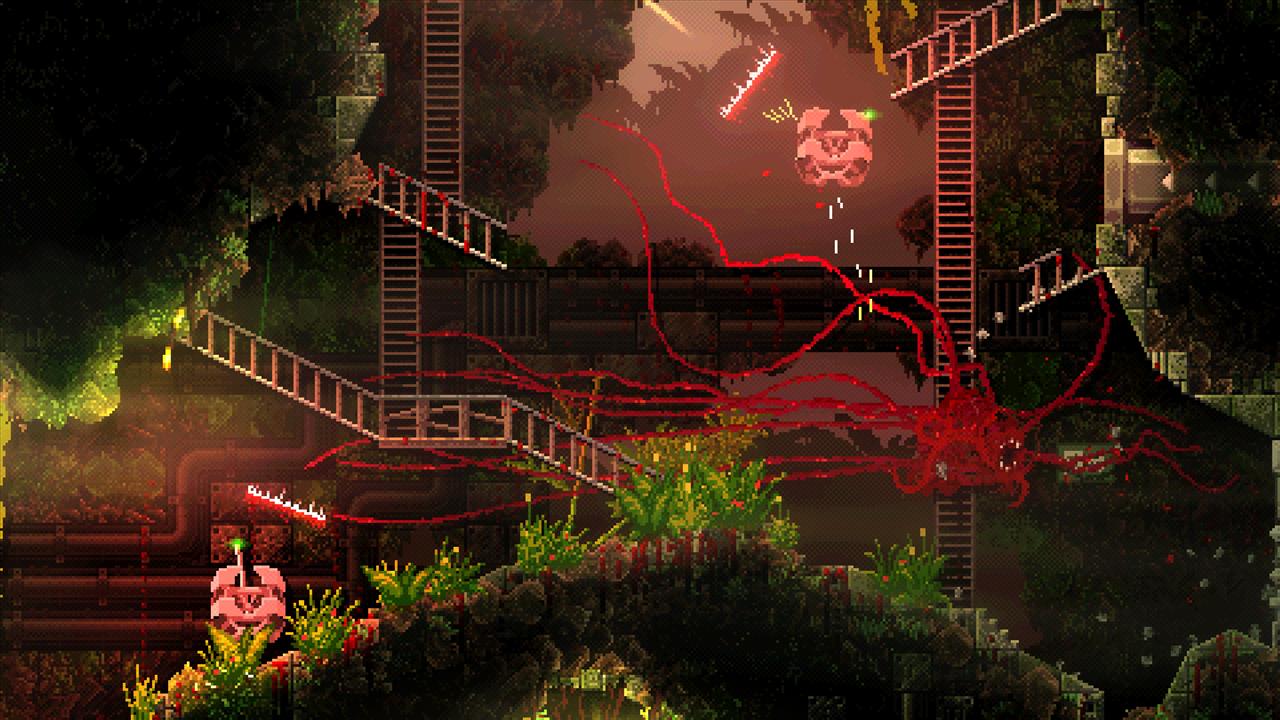 You aren’t invulnerable, though. A single rent-a-cop with a handgun can put you down with just a few well-placed shots, so moving quickly and using cover and vent shafts is imperative. This dance becomes a matter of life and death when you run into military security; these hazmat-suited killers pack fully automatic rifles, electrified riot shields and even flamethrowers. The worst insult is that you can’t eat them to regain some desperately needed health. That said, once they’re dead their nigh-invulnerable armored bodies serve one of the game’s creepiest mechanics.

About halfway through the game you gain the ability to snake out a stealthy tentacle and possess organic enemies. Normal squishy humans are useful for bypassing certain obstacles, as you can travel along your tentacle and burst out of their body Cronenberg-style. The soldiers however are indestructible, so you can happily massacre an entire room of enemies by taking control of whatever high-powered weapon your possessed grunt happens to be carrying. This is one of the more devious elements of the puzzle-solving gameplay and really gets that '80s body horror across. 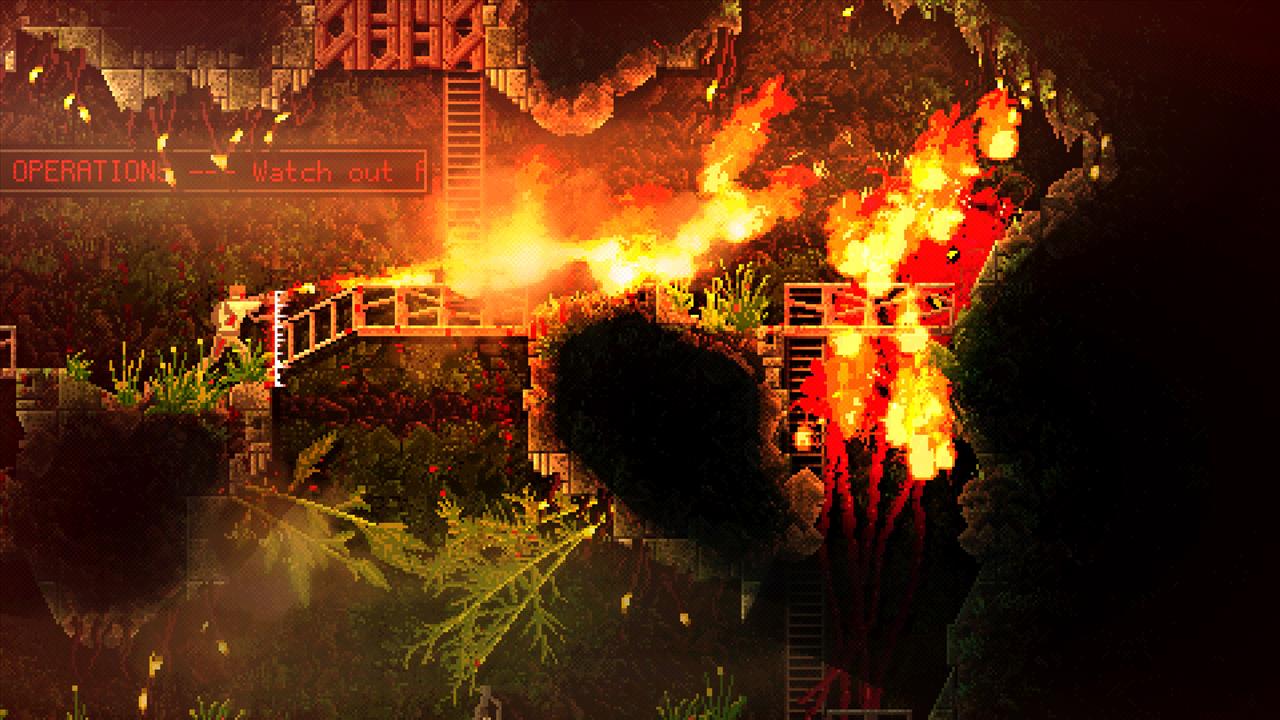 All of this is presented in truly masterful pixel art. I know what you’re thinking—Steam is stuffed with mediocre “retro” affective games that use lazy pixel art as a crutch. While some of its environments are a bit homogenous, Carrion otherwise rises to the top, evoking Castlevania: Symphony of the Night, with elements of Hotline Miami and even older classics like Out of This World.

The best example of this art style is the creature itself. It must have taken enormous effort and near-endless prototyping to get it to move just right, but the result is an amorphous mass of writhing worms and feelers, a scramble of tissue and teeth that constantly coats the environment in red slime and vomitus. Carrion is both beautiful and deeply uncomfortable to watch in motion. 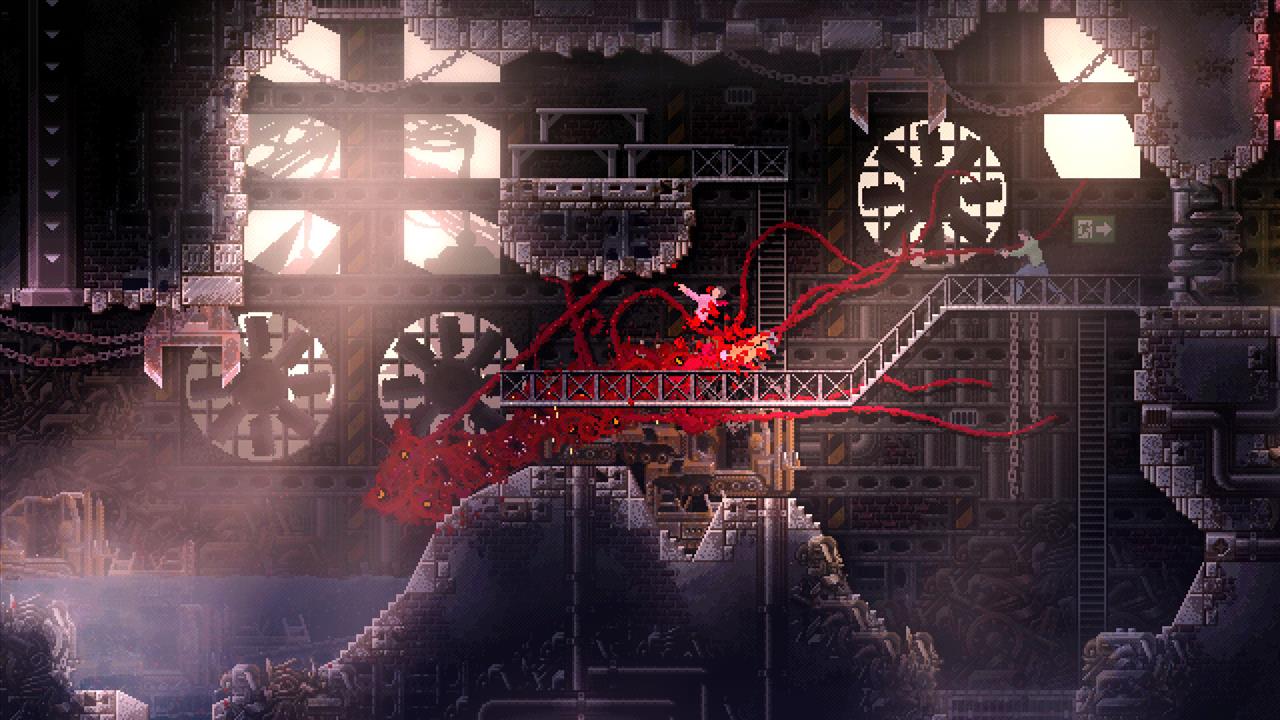 Carrion puts several twists on its genre but it’s essentially Super Metroid played from the opposite perspective. That’s great, you might think; after all, Super Metroid is a timeless masterpiece. Well, the only real complaint I have with Carrion is that it’s missing one of the most integral elements of a Metroidvania: a map.

There is no automap feature to speak up, and while the game world is very well designed, it’s extremely easy to get turned around exploring it. Each area requires that you infect weak sections of wall to innervate the superstructure with your biomass. This allows you to force segments of a security door that leads to the next area. 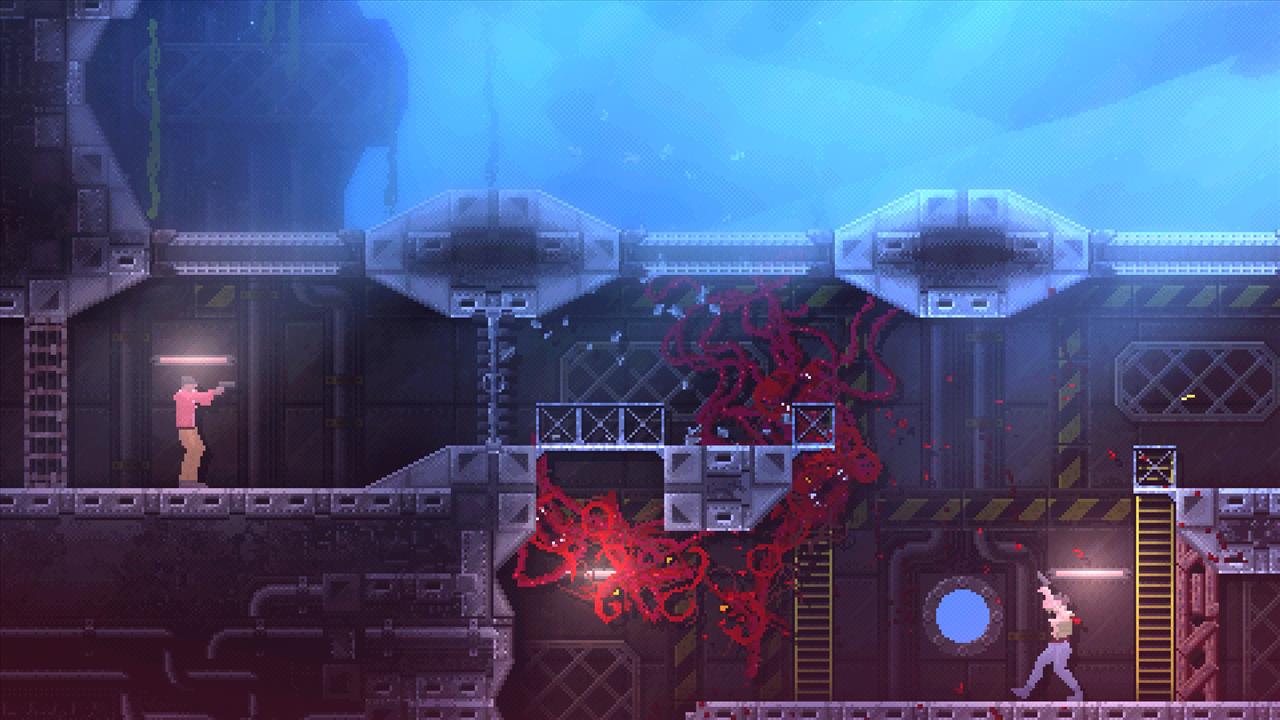 The problem is that this game does such a good job with environmental puzzle solving that if you put it down halfway through completing an area, you’ll typically forget what you were doing. Without a map it’s tricky to remember where you’ve been or what you were progressing toward; there is a sense of instinctual forward motion, but as the puzzles and areas get more complex, that momentum is difficult to maintain. What’s really frustrating is that the creature always has an echolocation ability for sensing the next weak point it needs to infect. This power is nearly useless, and would have been much more useful for “scanning” a new area through sense.

This is my only significant gripe with this game: it desperately needs a map of some kind. Phobia has to have detailed level layouts for the entire game; they could patch in even a simple map with the next content update. Please Phobia Game Studio, I love your game, it’s great, but for the love of God please add a map, any map will do.

This rather annoying omission aside, Carrion is a wonderfully devious and evocative new take on one of my favorite genres. It controls very well, the combat is quick, visceral and at times unsettling, and the environmental puzzle solving is complex and satisfying. Carrion is a rather short experience, maybe four to six hours, but the same could be said of many Metroidvanias. It’s definitely worth the low price of admission; just maybe keep some notes on where you were going before your pets or kids distract you. As it stands, this is a fantastic first effort from a new developer, and I can’t wait to see what they do with a sequel.

Carrion is a fascinating reversal of the typical Metroidvania. Playing as a hungry, tentacle abomination is fast, fluid and unnerving. My only complaint is that there is no mapping function, which can make progression a chore.