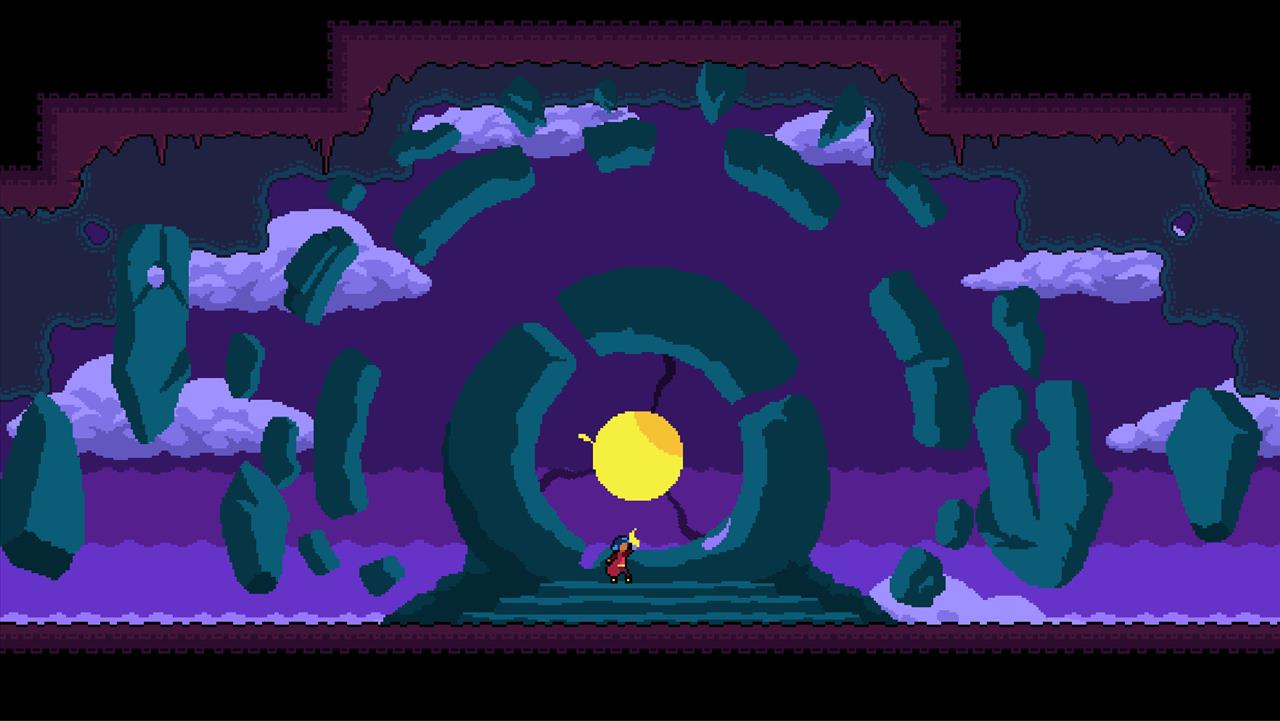 “It is what you do with the gift of life that determines who you are.” While that line from Pokemon: The First Movie was said in a different context—talking about the circumstances of one’s birth, specifically the clones that Mewtwo made—the line itself can be taken in various contexts.

If you had a gift that let you control the age of plants and animals, how would you use it? Would you somehow use it to your own benefit, or to the benefit of others? Maybe you can use your gift to help others in ways you couldn’t possibly imagine. Or maybe you come across a situation that not even your gift can directly affect. These are some somewhat deep questions you might ask yourself while playing Ageless.

Ageless follows the journey of Kiara, a young woman who’s trying to find her purpose in life and thinks that traveling to a mysterious shrine and receiving a gift of her own will help her find that purpose. The gift she receives is the ability to age plant and animal life forwards and backwards, making things older or younger at her will.

Along the way she meets Vi who has a younger sister who is sick and for whom things are looking kind of grim. Kiara wants to use her newfound gift on the young girl, but is informed that she’s been sick since birth and that Kiara would only be reversing the girl’s age, not the disease. She learns what’s needed to help the young girl and sets out in hopes of using her gift to aid her in her journey. 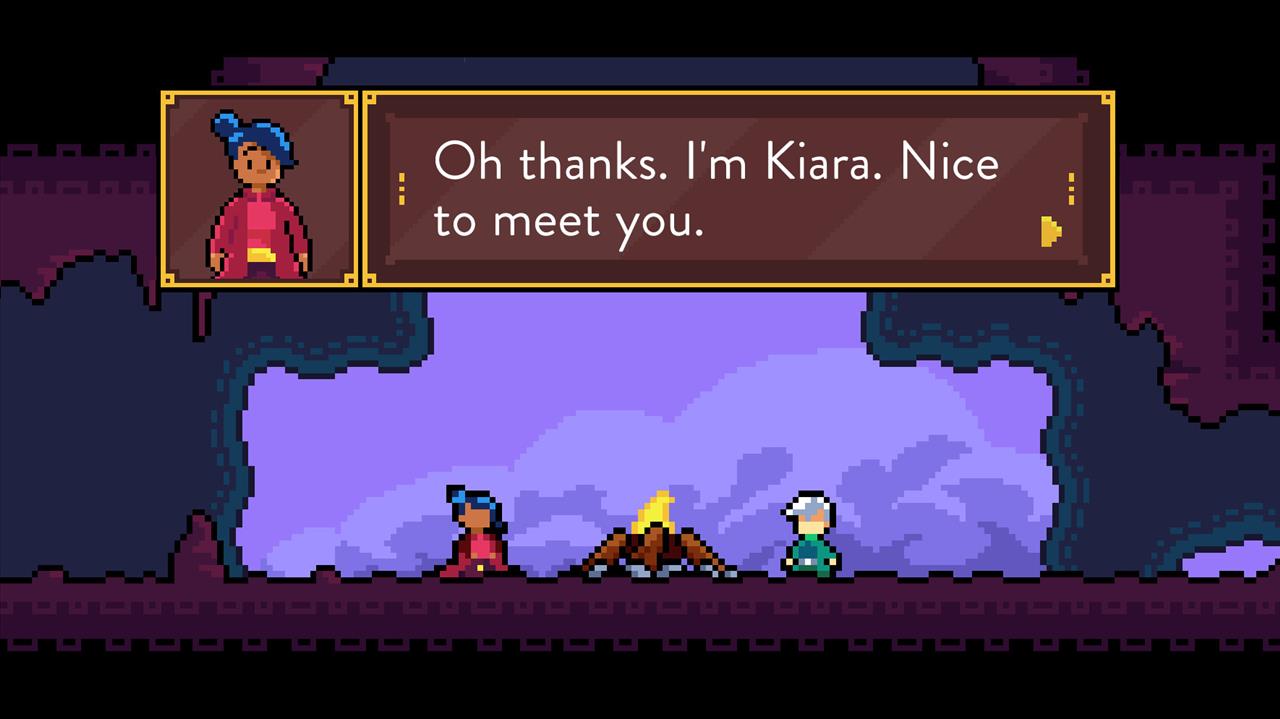 The goal of each area is to collect three green butterflies to open the door at the end. To help you achieve this goal is your primary ability is to age and de-age various plants and animals, most of which change properties when you do so. Plants can change from small seedlings that you can bounce off of to thorn bushes that will fire off its thorns at you, to a small tree stump that will summon another stump from the ground every few seconds to catapult you into the air. You can ride a dolphin up waterfalls, age it further to bounce off of it, or de-age it into a smaller creature in a bubble and use the bubble to regain air while underwater.

You also have the ability to become “ageless” which stops time for a few moments. When you do this you can locate and collect letter A’s you’ll find scattered around as a bonus objective, but furthermore touching anything that you could normally age and de-age will freeze you in place for a moment and allow you to launch yourself in any direction, while also launching what you touched in the opposite direction provided it can move (it makes more sense when seeing it in action). All in all this sounds like a great concept—and on paper it is. However, the true test is how it works in execution. 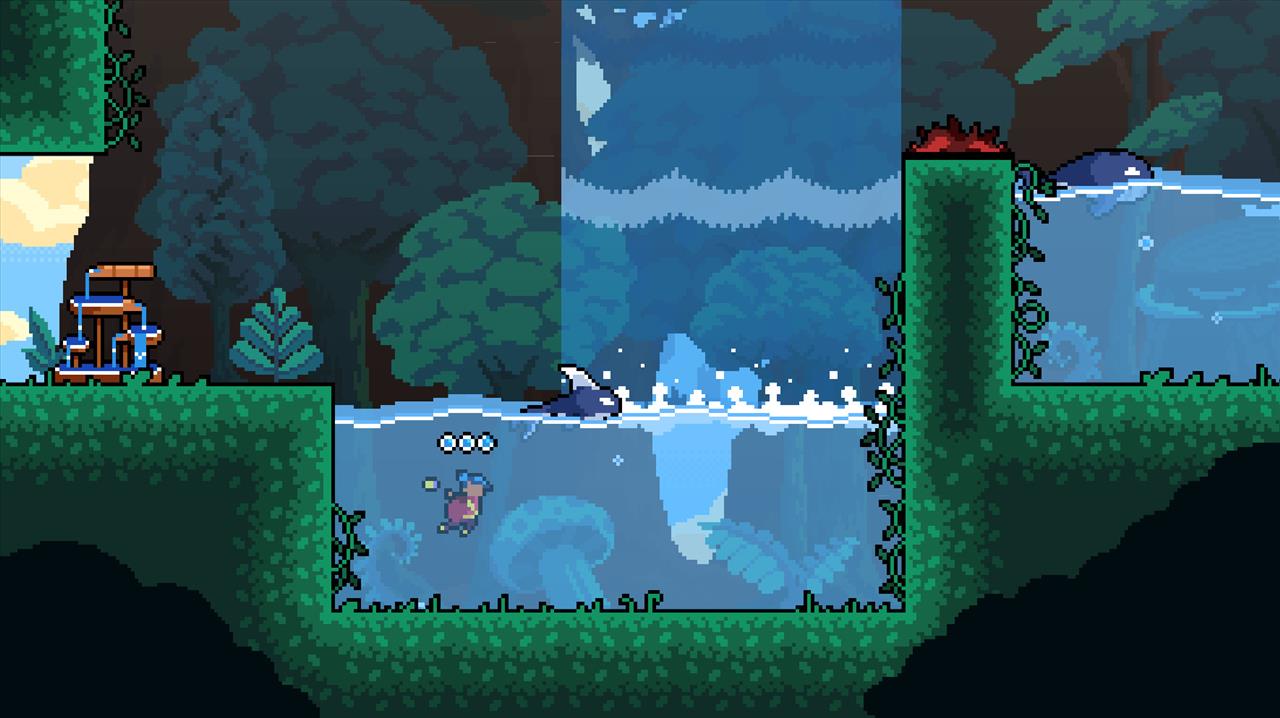 For the first few times playing Ageless, I was using the Switch in portable mode and using the Joy-Cons while later moving to a pro controller. Either one feels fine, though, even with thumb grips on the Joy-Cons, I tend to prefer the pro controller. The ZL and ZR buttons fire off arrows which, when hitting various flora and animals, will de-age and age them respectively. You can’t “rapid fire” the arrows; it takes a moment after firing one before you can fire the next. This comes into play when you have bushes trying to hit you with their thorns from a distance so you have to time firing your arrows and dodging the thorns.

However, there is one issue I do have with the controls and it kind of brings things down for me a bit: aiming. When you hold down one of the fire buttons, everything slows down greatly so you can aim your arrows at your target, then releasing the fire button will actually fire the arrow. Aiming can be done with either control stick, but there is still a minor issue that can crop up. 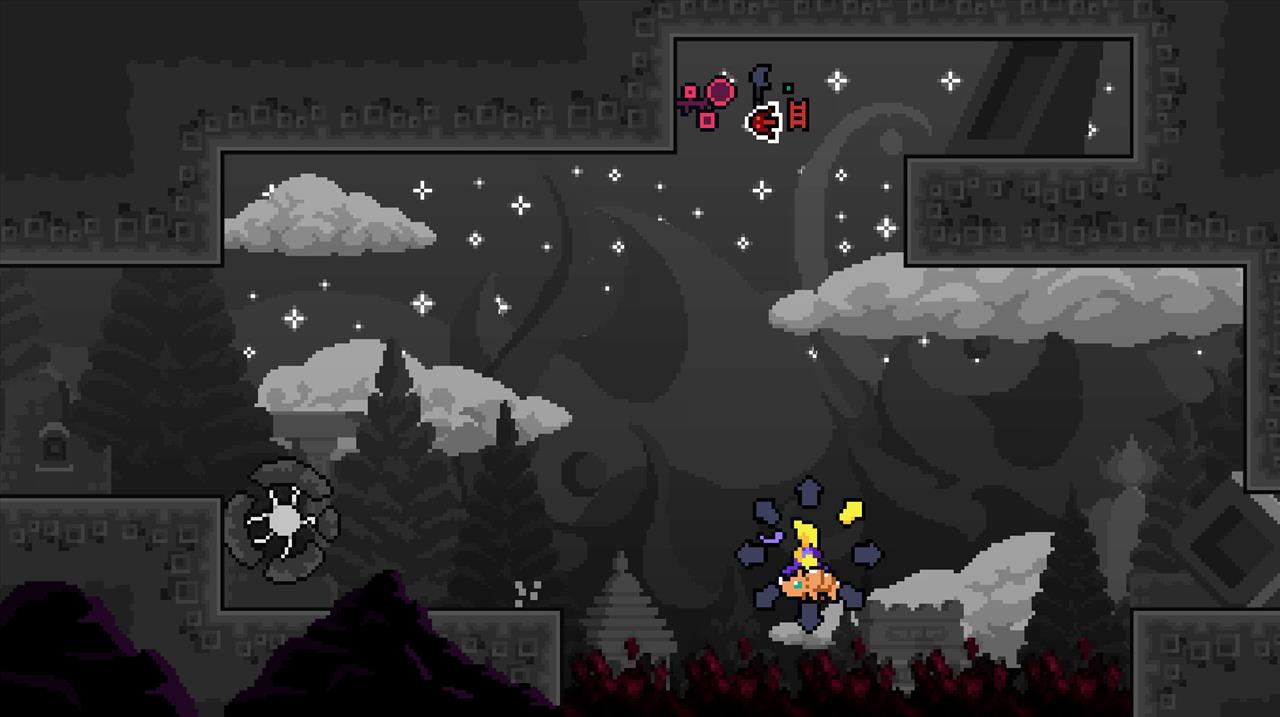 If you’re standing still when you hit the fire button, you won’t move at all while aiming your shot. However, if Kiara is moving at all when you hit the fire button, your momentum will keep going as you aim. You won’t even just freeze while aiming and then continue moving when you fire. This is a bit of a problem because even though there are one-hit kills and no lives to worry about, getting hit will send you back to the start of that room. What’s more is that I found out quickly that it is pretty easy to start aiming while Kiara is still moving and I see her just start to fall down into a hole or onto a thorn bush instead of stopping dead in her tracks. This takes some getting used to but I’ve had plenty of times where I’m later in the game and I still instinctively start to aim a shot while still moving and it’s basically made me have to start a room over from scratch.

The more I was playing Ageless the more it started to remind me of another game I had played a while back. The look and feel, the movement and the ageless ability to launch off of various objects, the story of Kiara not feeling worthy and filled with self-doubt, and even running into people who assure her she’ll be fine. After looking around I wasn’t the only one who was reminded of Celeste. 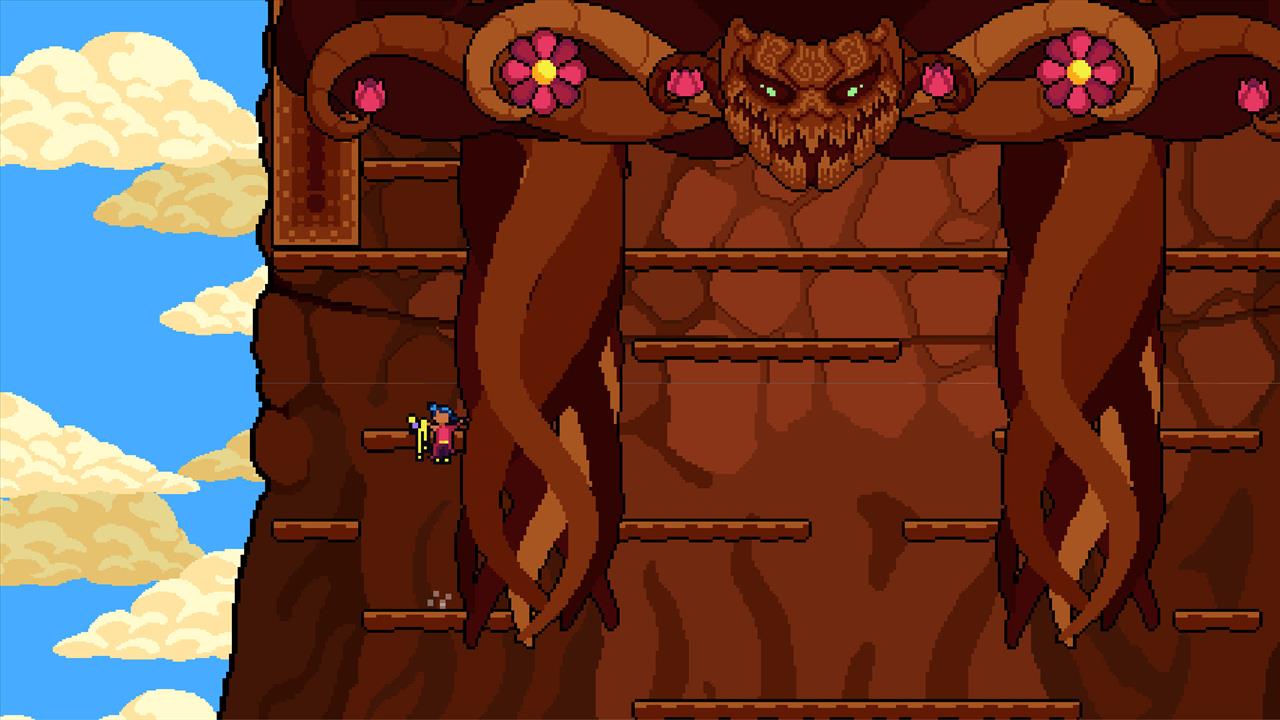 This isn’t necessarily a bad thing. I really enjoyed Celeste and, as is the case with me, I was drawn in by the art style of older 8- and 16-bit video games. On that note Ageless looks nice and colorful and the music is relaxing. Those alone will get me drawn into a lot of games, but it takes a lot more than that to keep me coming back. As stated the gameplay itself is mostly fine except for when it comes to aiming your arrows. On top of that the aiming is pretty sensitive as you can fire in any direction and some of your targets are pretty small and require precise timing.

Early on you’ll see most of the puzzles in their entirety from the start, or at least get a good look at them to where a mistake isn’t fatal. Later on though, and even a couple of times near the start, you will have some areas where you can’t see much of the layout to begin with and one wrong move can be costly, requiring a good bit of trial and error. One area, for example, has you riding a dolphin down under water and into a couple of side caves to collect the butterflies just before running out of air in each “cave.” Then you ride down further to see a bubble to regain your breath, and then further down is a small…amoeba? Which is actually the dolphin if you de-age it back to age level one. With very little time to think and aim you have to age that amoeba-thing to level two so it becomes a bubble, hit the bubble so you don’t drown, then continue riding the original dolphin further until you reach the surface again. The problem is that you won’t see most of that at first and you will die many times over until you’ve finally seen everything and can put it all together. 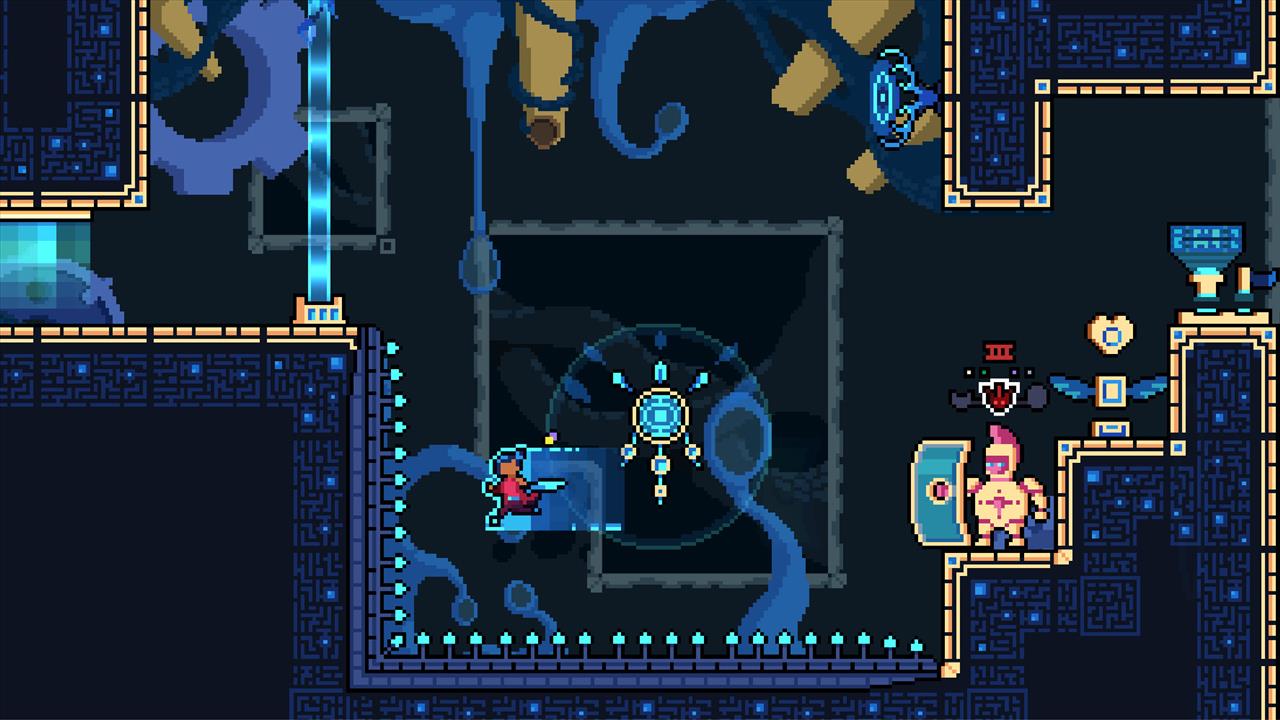 I’m kind of mixed on Ageless. The game looks and sounds great, again reminding me a lot of Celeste in a few ways. The concept of aging plants and animals to help you on your quest to find a flower to help cure a sick little girl is a unique concept, as far as I’m aware. While the 360 degree aiming operates like it does due to how the mechanics work, that doesn’t mean aiming still isn’t a chore. After putting quite a bit of time into the game I still occasionally find myself trying to aim without letting my momentum run out and I aim myself right into a thorn bush. In addition a couple of the targets, namely the age-level one targets, are really small, necessitating even more precise aim.

If you like Celeste and games similar to it, you’ll likely enjoy Ageless. Even still, Ageless is worth checking out at only 15 dollars on the Nintendo Switch eShop. Just take the first few areas after the intro to get used to the controls and mechanics so you’ll be better prepared for what’s to come. 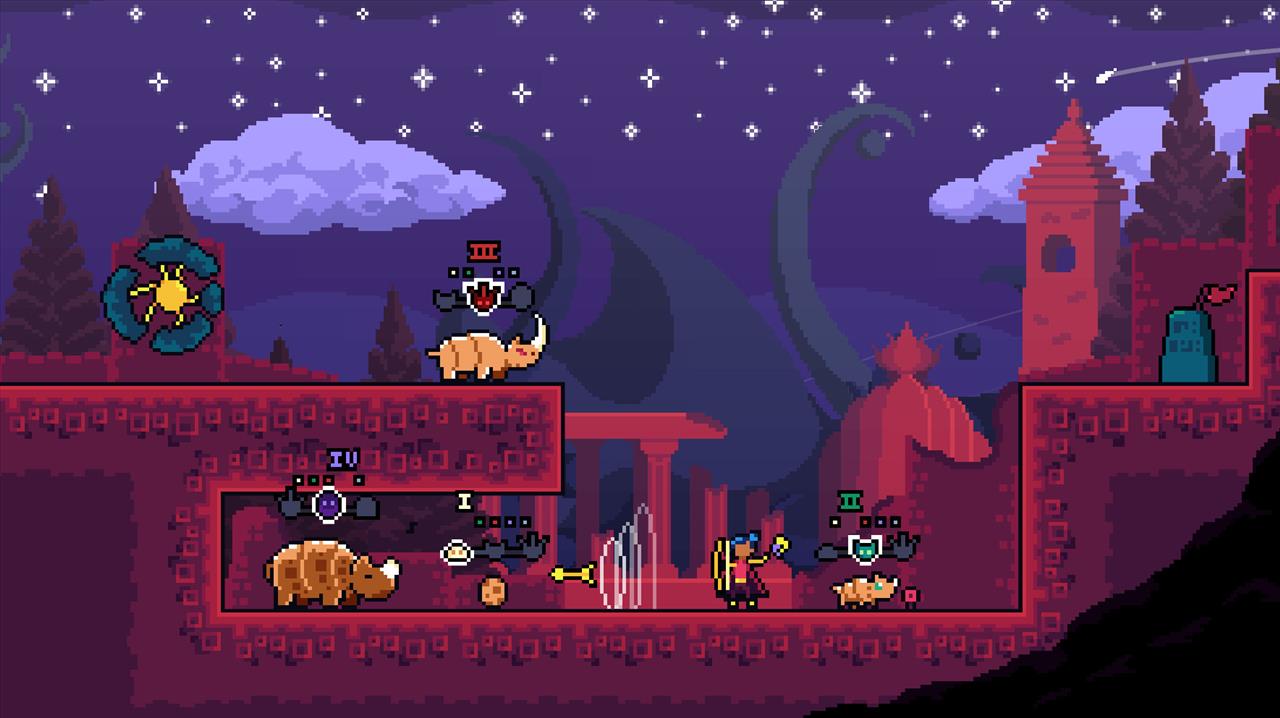 Even early on you'll have to master timing your aiming, using your ageless ability, and aging and de-aging things pretty much on a moment's notice to clear the rooms. If you can master the mechanics early on, you'll find an enjoyable outing that provides a decent challenge early on, especially if you explore each area and take the alternate routes to find the hidden artifacts. However, the trickiness of mastering aiming your arrows, coupled with an early spike in difficulty with some areas literally being trial and error for the first few attempts, may lead to a bit more frustration than enjoyment.

Ageless is bright, colorful, and sounds great, but is just a bit clunky. The game gives off a Celeste-vibe, which is a good thing, but it can take some time to get used to the age mechanics and the precise aiming required for a lot of the puzzles.