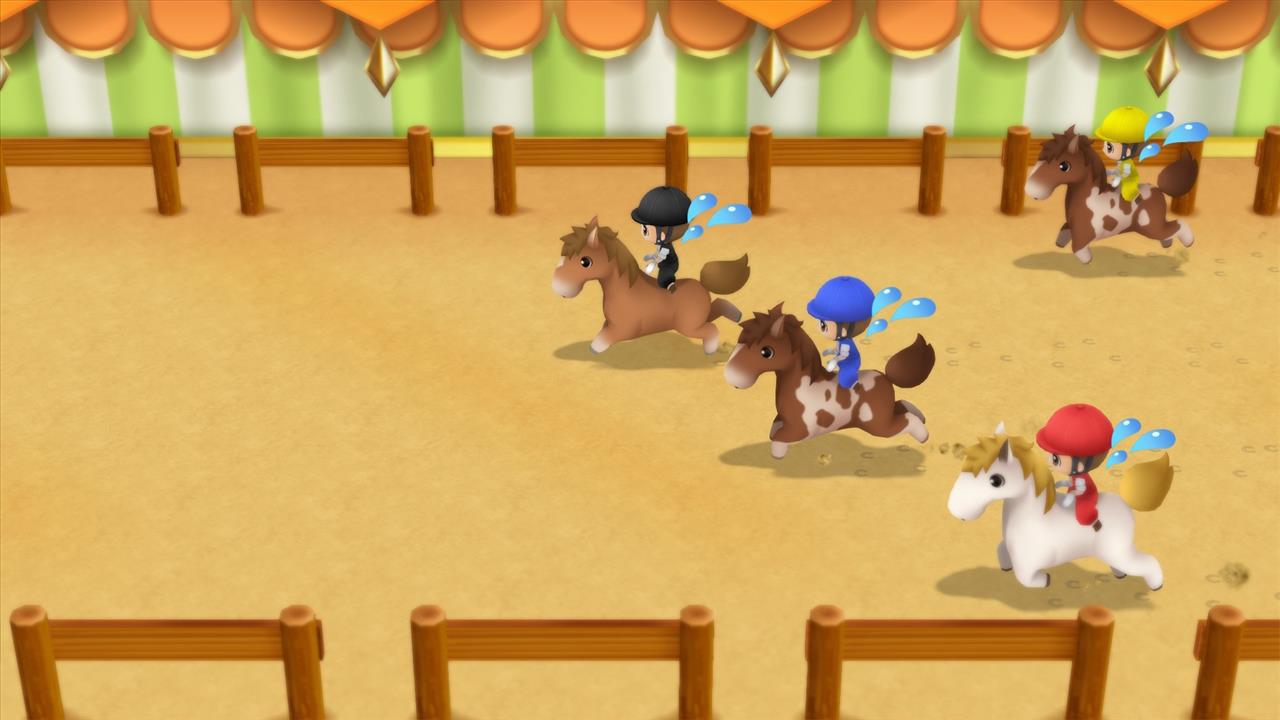 Written by Sean Colleli on 8/4/2020 for SWI
More On: Story of Seasons: Friends of Mineral Town

The first Harvest Moon game I played was Harvest Moon 64. It was fairly primitive by today’s standards, but I fell in love with the rustic charm, friendly townspeople, and the novel concept that a hard day’s work would earn you a decent living. There were times I wanted to take a vacation to that little town. When I was picking up my very first Game Boy Advance a couple years later, the saleswoman with the electronics key told me to treat myself and buy a second game. So on my way out of the Polaris Meijer that weekend, I carried a GBA SP, Metroid Zero Mission and Harvest Moon: Friends of Mineral Town.

In the intervening years the Harvest Moon IP has gone through a name change; the original publisher kept the name, whereas the developer, Marvelous Interactive, kept making farming sims under the new title Story of Seasons. I reviewed their first game under this new name several years ago and thought it was quite good. That said, nothing can match the nostalgia of Mineral Town, my companion and retreat through high school and college. Now that the game has been remade from the ground up for Nintendo Switch, I was eager to explore my old stomping grounds to see if my memories hold up.

While Story of Seasons: Friends of Mineral Town retains all of the same characters, the world design and basic mechanics of the GBA game (which itself was a remake of the Playstation One game Harvest Moon: Back to Nature), Mineral Town on Switch is a top-to-bottom remake. The visuals have been completely rebuilt in a new engine for HD and the game runs at a pretty solid 60fps docked or portable. The art style might be to everyone’s liking, but it hews pretty close to the chibi style of the N64 and PS1 originals; all in all it reminds me of Harvest Moon: Magical Melody back on the GameCube, which I didn’t mind at all. Some of the characters have slightly updated fashion sense than they did on the GBA, but considering you were working with spritework on a 240x160 display, all in all it’s a pretty good translation of the GBA game’s style. 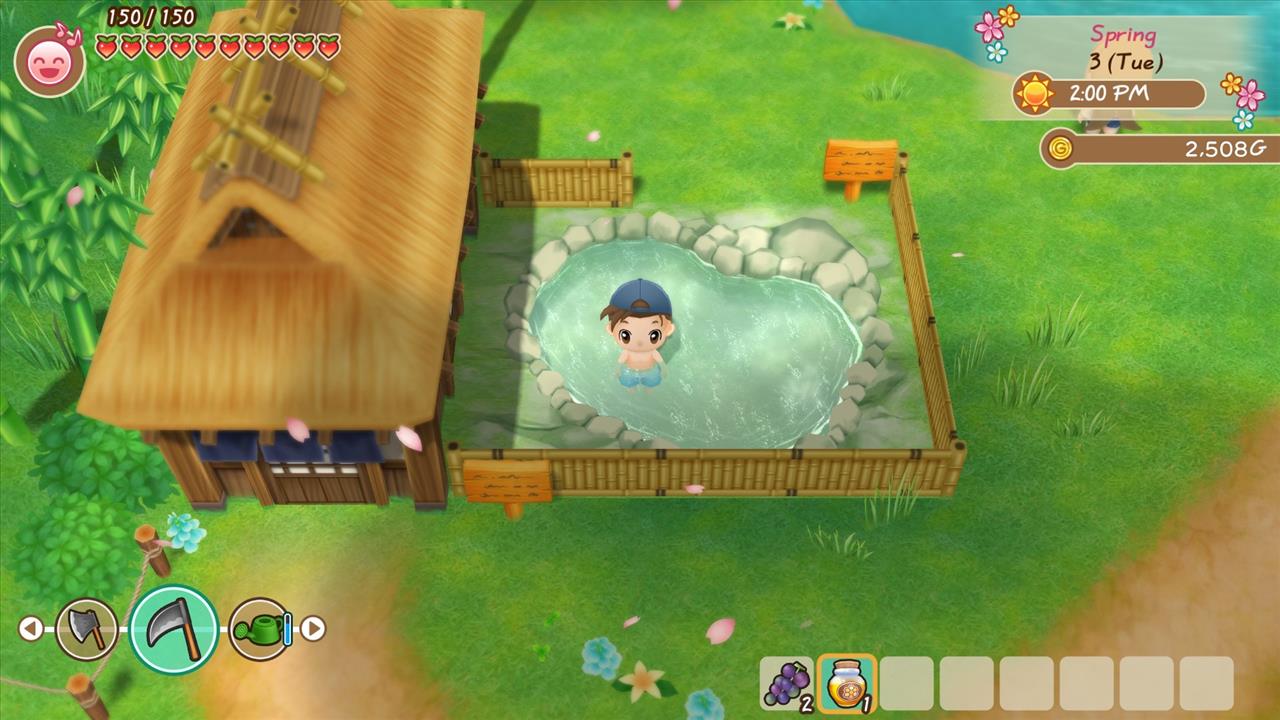 Once I got past the art style and massive bump in resolution, I fell into a wonderfully familiar, comforting routine. I got up bright and early every morning at 6 a.m., watered my crops, tended my animals and did general chores around the farm. Then I’d head into the woods to forage for wild produce to sell, or flowers to give as gifts, then I’d head into town to socialize and buy any supplies I’d need. Naturally there were exceptions to this routine, like festivals or digging in the mine for valuable ores, but I very quickly fell back into what my brain already knew was the most efficient way to run my day. If you’ve played Story of Seasons or Harvest Moon before (or one of their successors like Stardew Valley), you’ll know that routine and repetition are big parts of the experience. It’s not for everyone but it can be extremely relaxing and delightfully predictable, like tending a Zen garden or working through the katas of a martial art.

I remember how this reliable routine was a psychological anchor during my freshman year of college in 2004. Along with the comforting familiarity of Super Mario 64 DS, Mineral Town helped me cope with some pretty big changes in my life: a high school friend had committed suicide right before graduation, my grandfather lay dying in the hospital, and I was adjusting to the overwhelming academic city that is Ohio State University. Video games get a raw deal in terms of their reputation as time wasters, but the unchanging nature of these games gave my brain a desperately needed home base to recharge in. Having that escape hatch gave me the mental fortitude to expand socially and tackle new challenges in college that I wouldn’t have even considered before, and as a result I had some amazing experiences and forged enduring friendships, where I might have otherwise retreated into a stagnant comfort zone. As I unwound the Mineral Town days on my Switch, this familiarity comforted me again in what is an undeniably uncertain 2020. 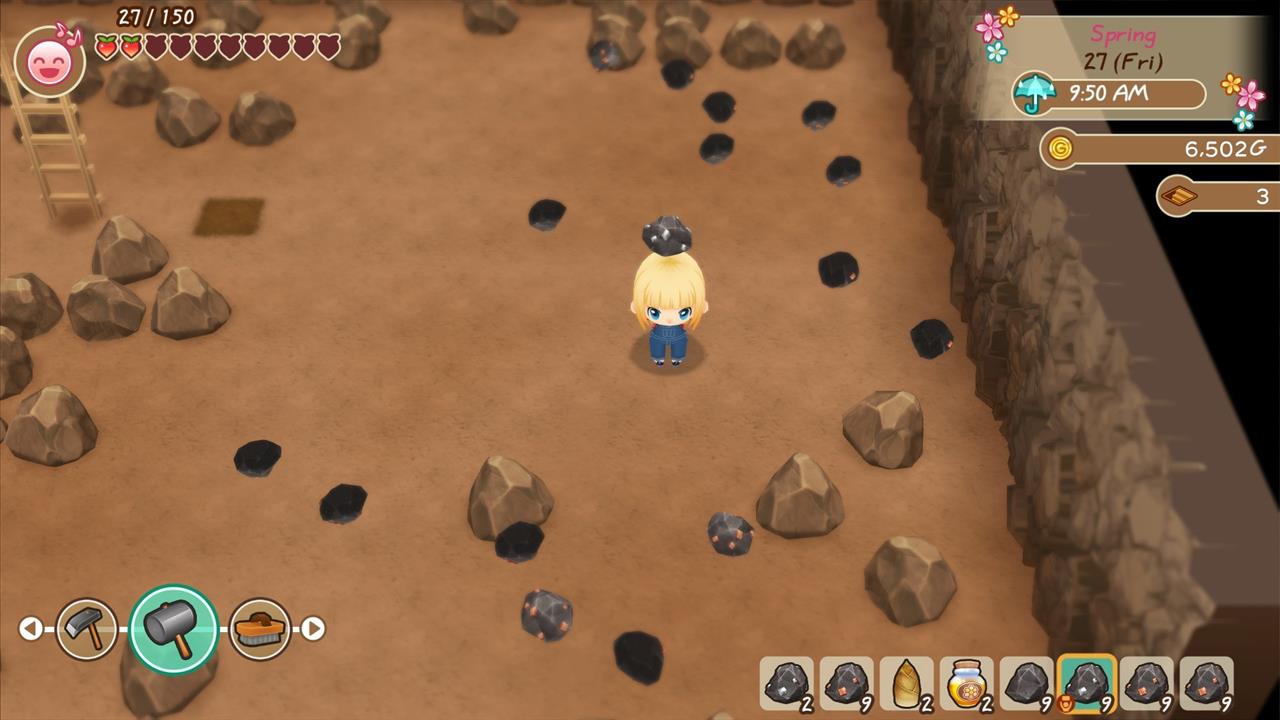 Once you scratch the surface of Mineral Town you’ll realize there’s a lot more to do than watering your garden. The dating sim-lite aspect is perfectly preserved, with a few new perks. Marriage is now fully supported with all of the eligible bachelors and bachelorettes, regardless of the gender you choose. This makes all the singletons effectively bisexual, which like in Skyrim is a little odd, but in practical terms means that any player can court and wed their favorite character. There are also two new options: Brandon the passionate artist, and Jennifer the carefree flower child. The game also gives you four playable characters: the original Pete and Claire, as well as two new Japanese farmers, Yuto and Naomi.

It might seem a little embarrassing but I always found the dating and marriage system to be one of the more enjoyably quaint aspects of these games, and I’m happy to see it expanded on a bit. I also give my wife a hard time about her Stardew Valley save file; I’m the fashionable man-about-town and she’s the antisocial hermit who spends all of her time in the mine or scrounging around on the mountain. 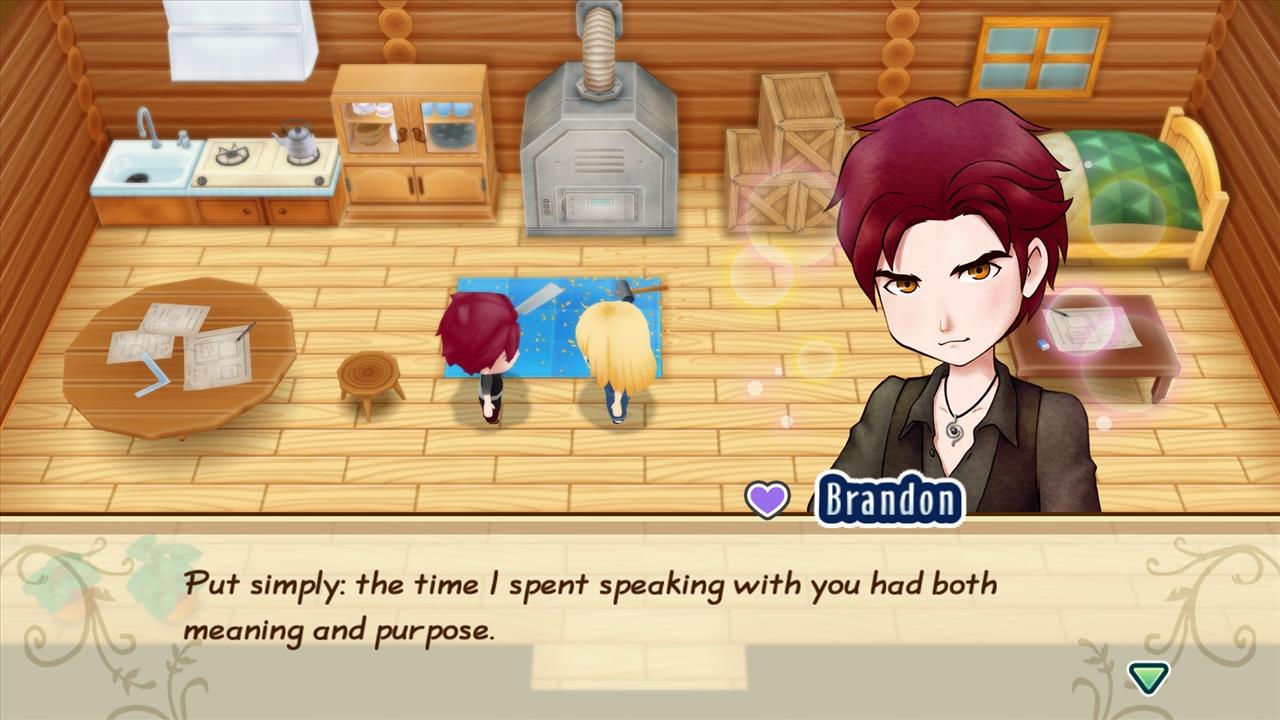 The depth and breadth of farming options available is just as expansive as it was in the GBA version, and has been added to considerably. All the same crops return, but there are a number of new domesticated animals. The reliable old cow has been expanded into four varieties: normal Holstein, coffee, fruit and strawberry, producing the associated kind of milk. I like to think that the coffee cow has tiny spiral eyes from all the caffeine coursing through her bloodstream. Sheep are once again the primary wool-producing animal, but now can be supplemented with alpacas and adorably fluffy Angora rabbits. Pets have also been expanded dramatically; the original Beagle is joined by Papillons, Shiba Inus, three varieties of cats, penguins and even capybaras. I may not have the real world funds to fulfill my dream of adopting all the homeless animals ever and creating the most extensive petting zoo, but in Mineral Town I can get pretty close.

It takes quite a bit of work to level up your tools, buy and raise animals, grow a healthy harvest and eventually upgrade your house. You need to save a lot of scratch and gather not insignificant amounts of supplies and building materials. Early on you’ll feel like you’re working your farmer to the bone; you’ll probably stay up too late and wake up exhausted. But if you’re not stretched a bit thin at the beginning, you aren’t playing a Story of Seasons game the right way. When you have a full stable of productive (and adorable) animals pumping out wool and cheese and eggs like there’s no tomorrow, and a tomato and eggplant crop that’s the envy of the tri-county area, all that hard work will be worth it. And by that point, you might just have the confidence to pop the question to that cute girl or guy in town. 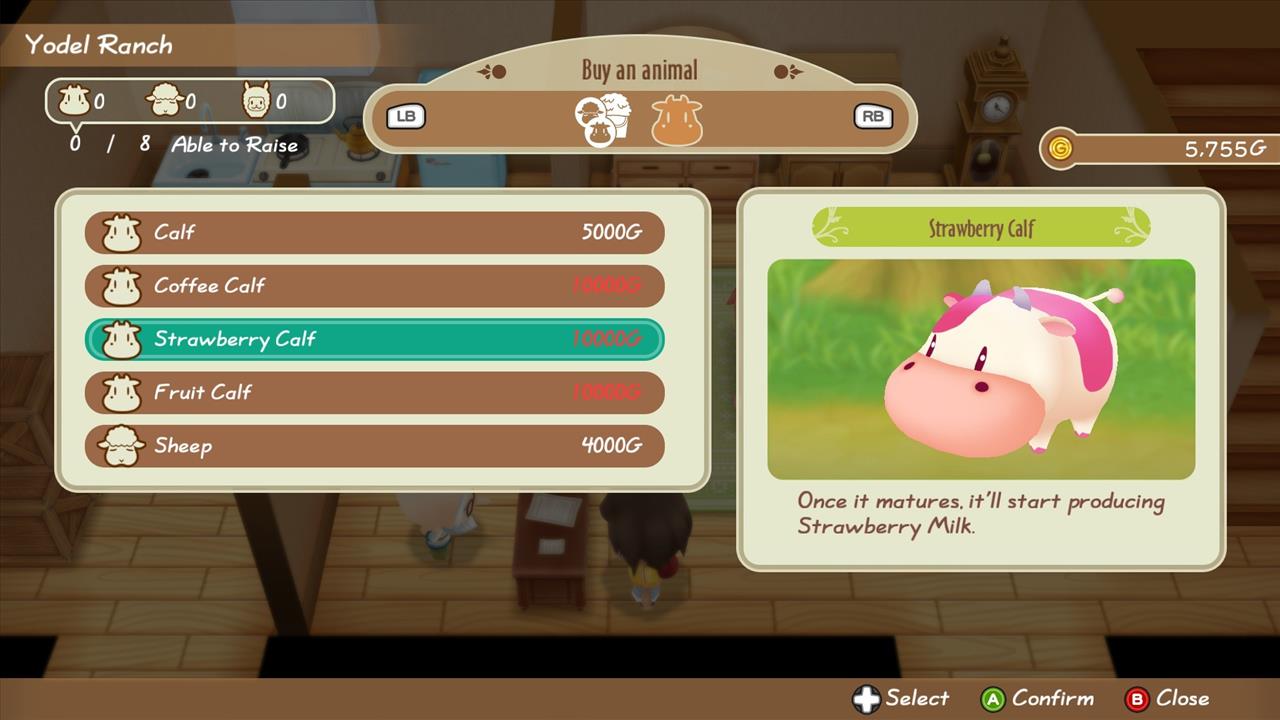 I’ll be honest, a lot of this is nostalgia talking, but all these years later Mineral Town is still an exceedingly solid entry in the series. It speaks volumes that at best Marvelous just added more stuff to an already overstuffed game. You won’t find the positively absurd number of exotic crops and other features you’ll get out of Stardew Valley, but then again that game was produced by a diehard Harvest Moon fan when he felt his favorite series had lain fallow for too long.

Mineral Town is a more focused, slightly less relaxed take on the farming sim. It pushes you more to succeed, and as you gain some financial breathing room and start exploring beyond your farm, you’ll be shocked by just how much more there is to uncover and work toward. Mineral Town is this fractal tree of hard, rewarding work; you’ll think you’ve mastered it two or three times already, but then you’ll learn about this crazy rare thing down in the mine or realize that you can marry the Harvest Goddess. 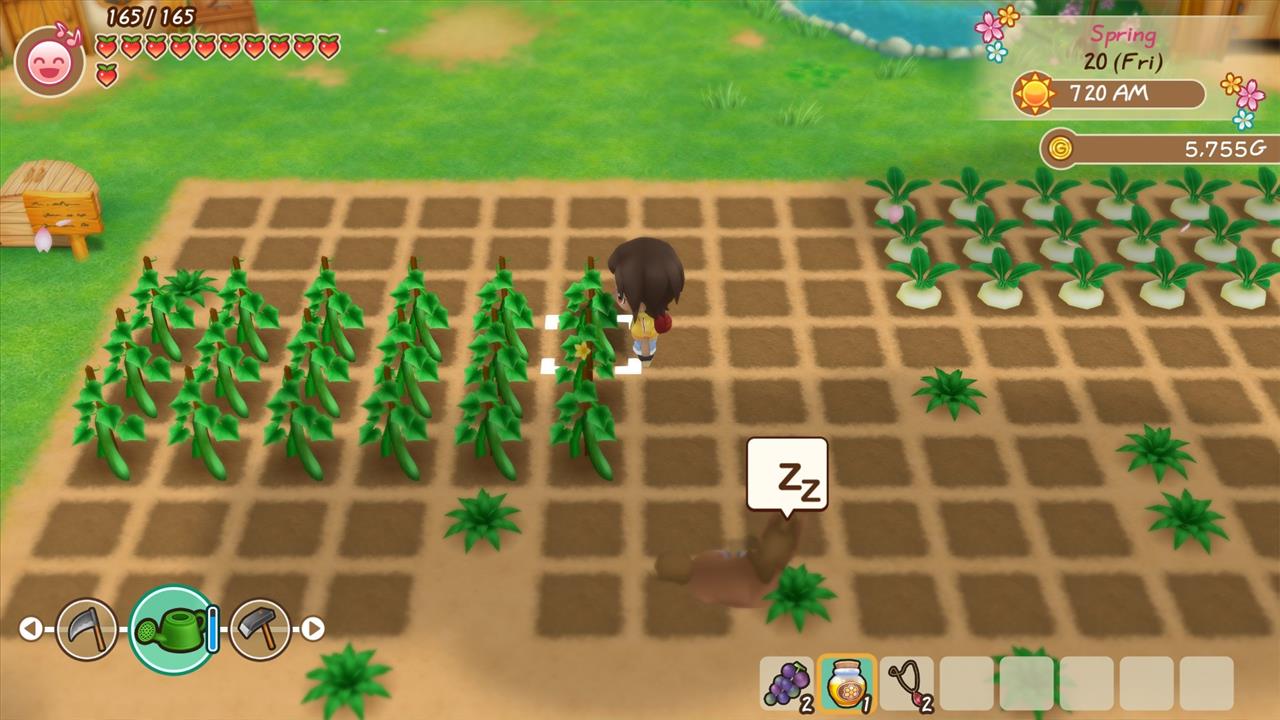 I’m amazed after all these years that this game still has the ability to just melt the hours away. It’s also portable, which is either a wonderful or horrifying thing depending on how busy you are in your real life. In fact, I’d be playing it right now, if I could only kick my wife off of Stardew Valley long enough to make some real progress toward buying that coffee cow. My Mineral Town obsession has rekindled her farming fever, which proves just how enduring this charming niche genre really is. It’s comforting to know that nearly two decades later, that old dirt road still softly calls, and Mineral Town is just as cheerful and welcoming as ever.

Who says you can never go home again? Story of Seasons: Friends of Mineral town takes an already great game in the storied franchise and throws it into HD, with a hefty bushel of new content along for the ride. Whether you're a nostalgic veteran like me or a greenhorn just starting out, Mineral Town is a worthy addition to your Switch library.