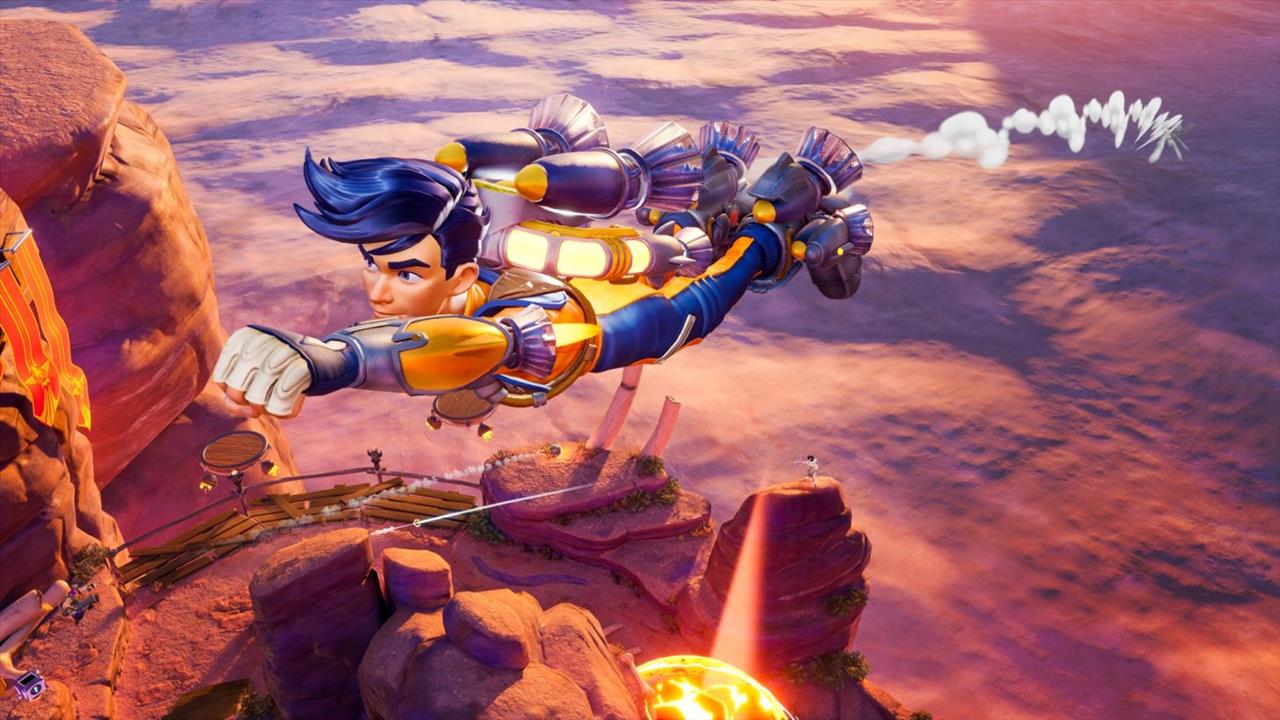 Despite feeling like the market has been over saturated, the hero shooter genre is still going strong and Rocket Arena adds another game to that growing list in the genre. Rocket Arena however is a faster and more casual game where, as you would expect, all weapons are rockets. A lot of the matches are fast paced and it's one of the easiest games to pick up and play. It is fun, but at the same time this is one of the worst launches of a multiplayer game I have seen in a long time and really puts a damper on what could have been one of the biggest multiplayer launches of the year.

Rocket Arena at its core is a hero shooter. The game features a colorful and diverse cast of characters each with their own weapons, special abilities and ultimate abilities. Given the name of the title, it's no surprise that every character's main weapon is a rocket. Well kinda.

Amphora basically has a water gun, Izell has a spear and Jayto has a machine gun, but the weapons all act like rockets, so you get the point. Speaking of which, I think we all remember the first time we played Quake 3 Arena or Halo and used the rocket jump exploit to get away from enemies or get to higher areas. Well this game is based on that concept. Your character can jump three times in the air but you can also launch your main weapon downward to the ground to launch yourself in the air or to climb up to higher areas. 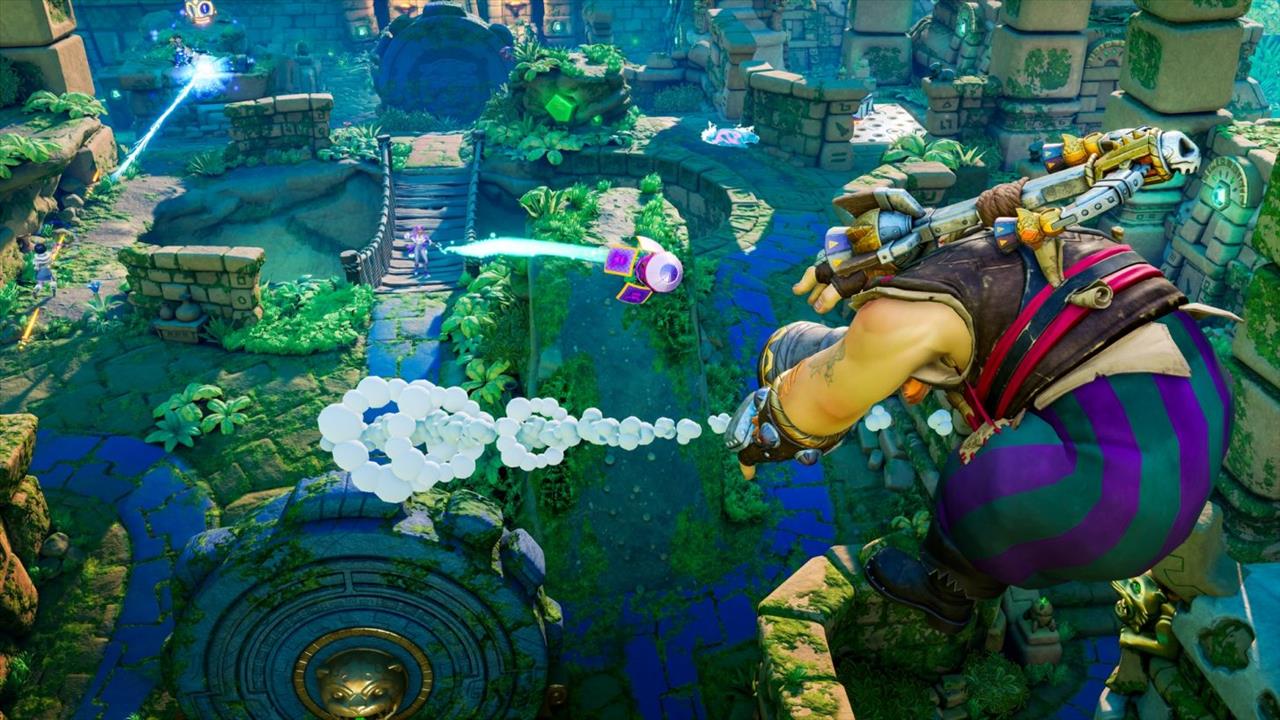 Games are fast and frantic to the point where you may find yourself getting shot at and knocked out before you even realize what happened. That however ads to the charm of the game. Even only being 3v3, some of the maps are quite small and these are the ones I enjoyed the most because I loved how matches in the smaller arenas are just crazy frag fests with rockets and players flying all over the place.

There are bigger maps in the game and the maps do vary between small, medium and large, which is good. And the maps add to the lore of the game in which each one is the home location of the playable characters and include a Mayan jungle, snowy castle, the wild west, an under the sea map and more. Some of the maps even have interactive elements to them like shooting the switches in the Jungle map will cause a barrage of rockets to be fired from the temple and explode on the battleground below. 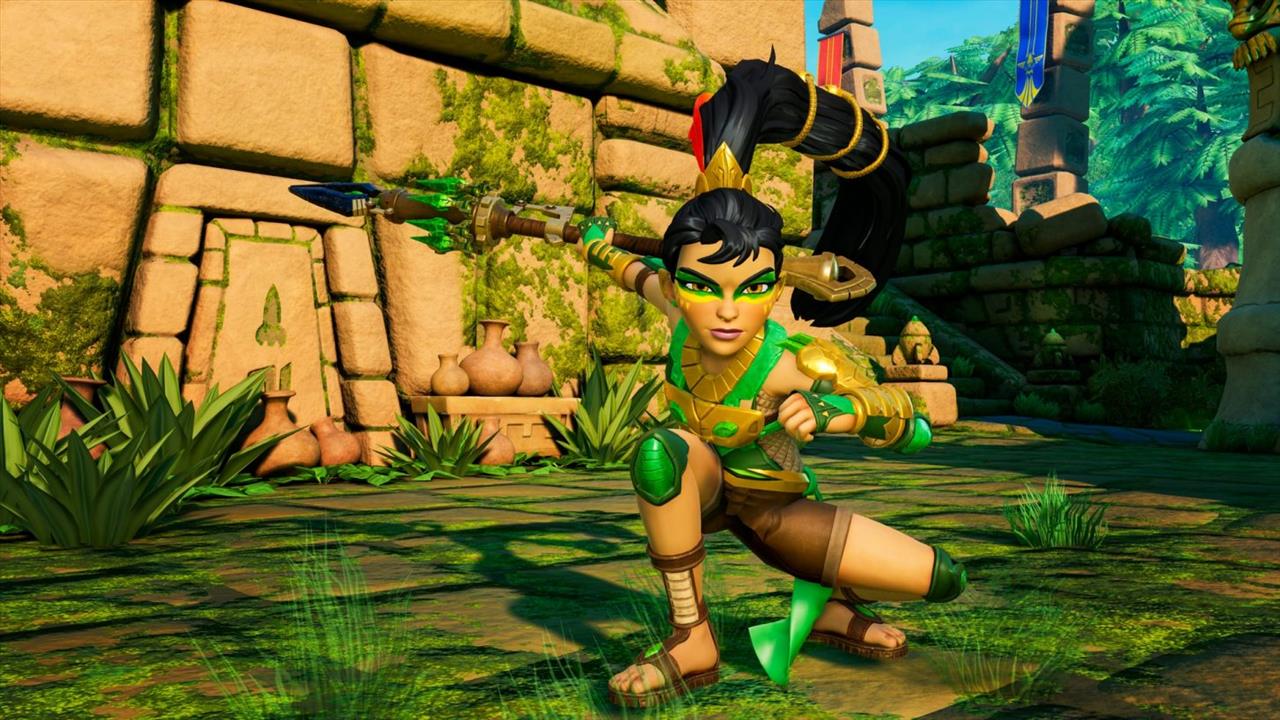 Despite the game basically being a hero shooter, the mechanics of the game are somewhat different, mostly with how you score knockouts. Dealing damage to enemies, I would say, is somewhat similar to Super Smash Bros. Taking damage fills up a meter. When it fills you will get launched into the air. From here your character will be floating in the air but you can save yourself here with some skillful dodges, but if you take another hit you get launched out of the arena. Avoiding that final hit is possible but very rare since your movement when in the air is severely limited.

I do like how your character will slowly float back to the arena from the sky, as that acts as your respawn timer. There are also item boxes in the arena that can give you a leg up in the fight with items including bombs, trip mines and magnets that will block incoming rockets. Match timers are short as well, so this is the perfect game where you can play for hours or just a few rounds at a time. 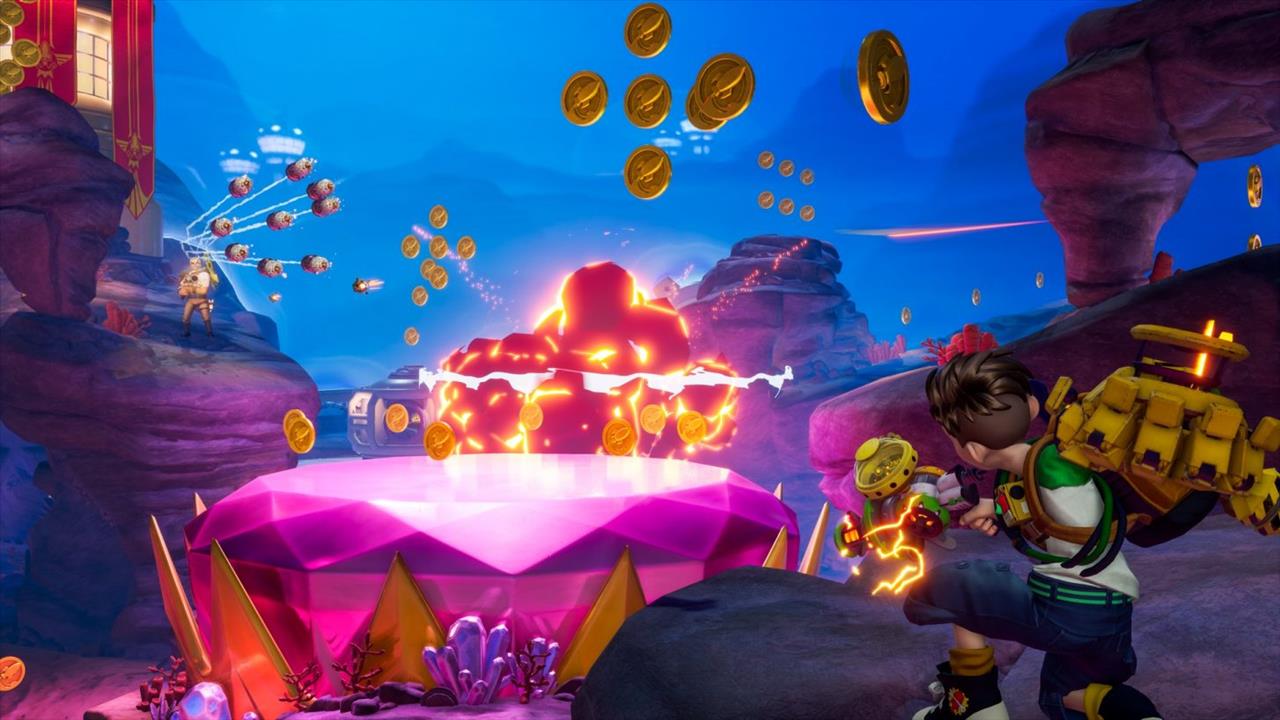 There are three different game modes available. Knockout is your basic team deathmatch where you have to knock out as many opponents to either reach the score limit or have more knockouts by when the time limit runs out. Mega Rocket is a domination like mode where you will have to capture a certain spot on the match. The first team to capture five points wins. There is also, in my opinion, the best mode of the game, Rocketball, where you have to capture the ball and throw it in your opponents goal to score points. Finally there is Rocketbot Attack which is a co-op hoard mode where your team has to defeat all the bots they throw at you. This mode I actually enjoyed cause it's perfect for trying out new characters. Winning matches earns each of the characters XP and leveling up characters will unlock currency, outfits along with various titles, backgrounds, icons etc.

Now I feel like I have to bring this up—and that's the price of this game. $30 isn't a ton of money but it's still a hefty price for what you get with the game, which is incredibly bare bones at the moment. I understand that more content will be added to the game over time but that still doesn't excuse the price. This really should have been a free to play game, especially since the game is riddled with microtransactions, multiple currencies and has a battle pass as well. 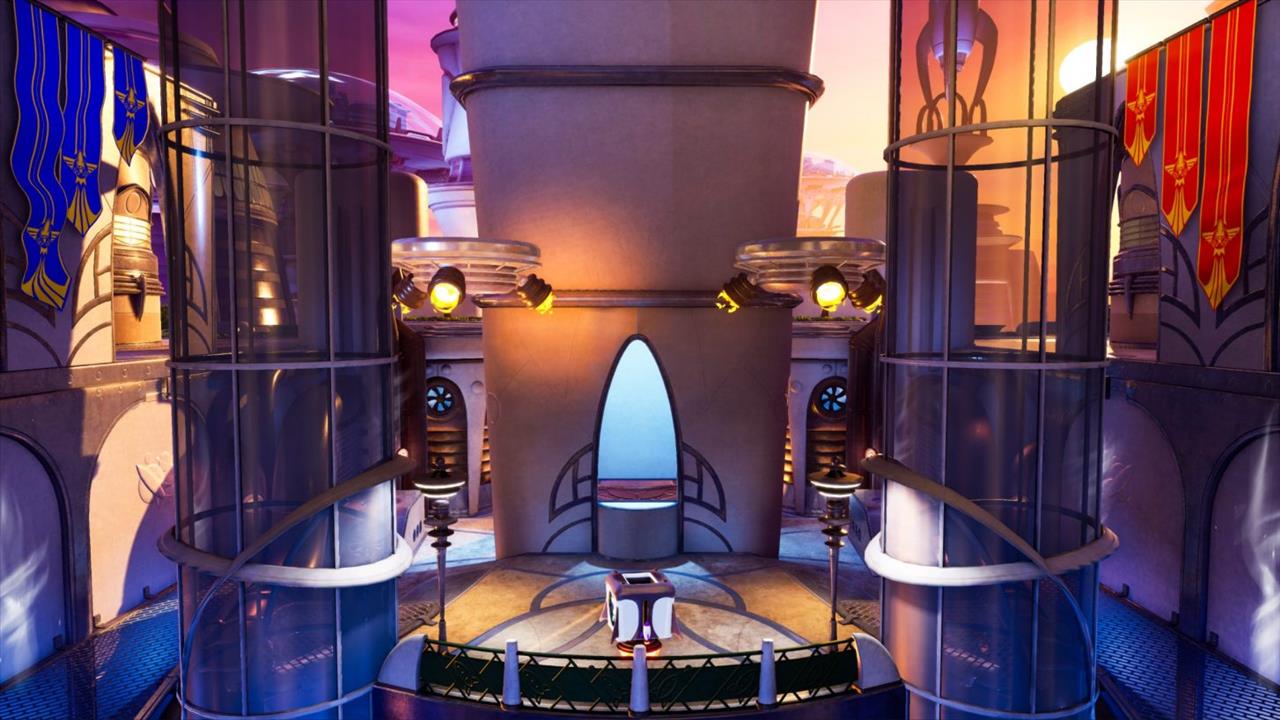 Even worse is the fact that this might have impacted the player base which I have a feeling is really low. Despite having cross-play turned on, it took a long time to find matches, and even then they were always one-sided squashes where one team would be level ones and twos against a team of level 20s. What makes it worse is the game has something called "artifacts" which are basically boosts you can equip on your character. These boosts can be anything from knockouts reducing cooldowns, faster movement or dodge cooldowns reduced. A new player going up against a team with all high level artifacts is not fun at all. There is a ranked mode which thankfully hides your rank, so at the very least there isn't the pressure or the annoyance of seeing that you're going up against a team that you will either stomp or will stomp you.

This is sad because I see a lot of potential in Rocket Arena but this launch was completely botched. A steep price, hardly any content and long loading times pretty much mean that it's going to be almost impossible to find a balanced match. And it's probably going to cause players to stop playing for now. 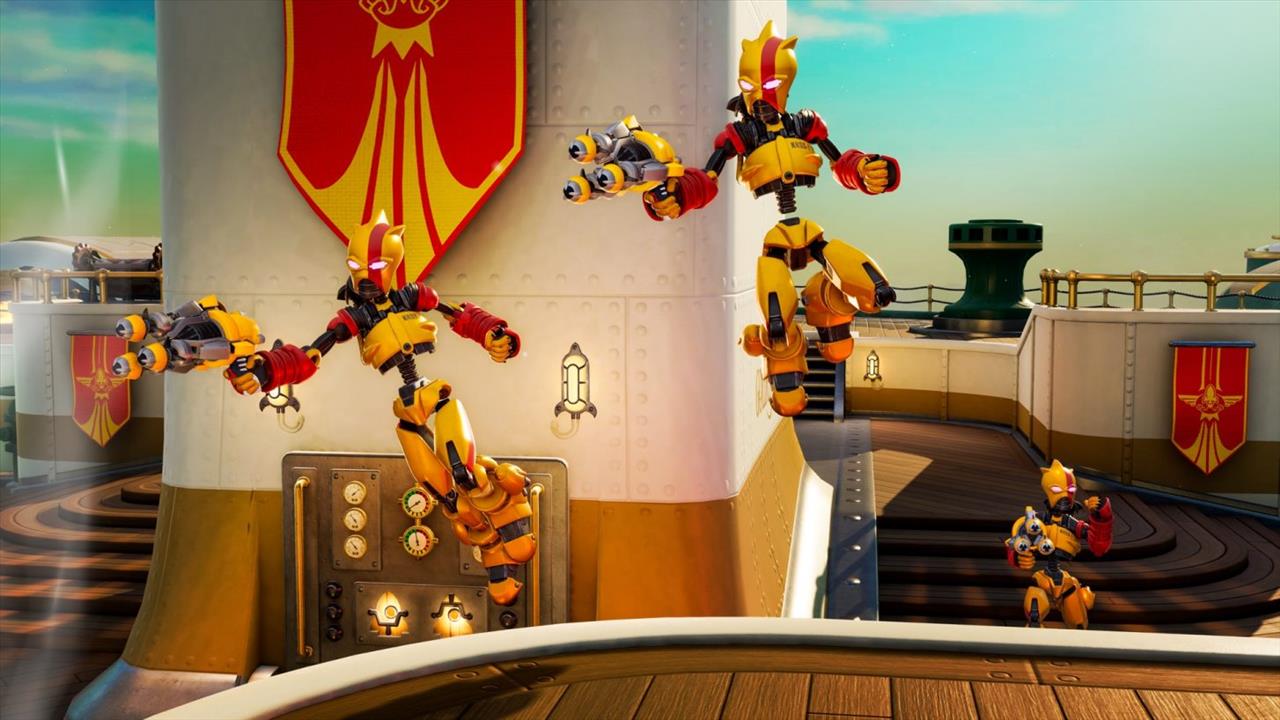 It's not all doom and gloom as the actual gameplay is fun and the characters at least have their own unique weapons and play styles. This could be one of those games that ends up being a breakout hit and, years down the line, is filled with tons of content and has a big player base. Unfortunately I can only review what I have now. While the game is fun, I felt like I did and saw everything the game had to offer in about an hour.

Rocket Arena shows a lot of promise but a there is a steep barrier to entry with the small amount of content it offers right now.