Samurai fantasy is a very real thing. After years of games like Assassin's Creed exploring various historical periods, many people have been craving a foray into feudal Japan. Ghost of Tsushima fills this need with a more traditional action-adventure take on the samurai lore.

The best part of the game is the island of Tsushima itself. The game world is one of the most beautiful I've ever seen. Every part of the map feels carefully crafted, with tremendous thought put into the visual design. The result is a world that begs to be explored. I spent hours at a time simply wandering the land, excited to see each new area. The game uses color excellently, providing vivid and diverse landscapes that are both beautiful and functional, allowing players to easily determine where they are on the map. Pairing all that up with a day/night cycle and a variable weather system, you get a perfect storm that makes the entire world of Tsushima feel vibrant and alive.

The visual design of Tsushima isn't the only thing that makes it feel alive. Towns and villages scattered across the map are filled with villagers you can talk to. As you interact with them, the information they provide can reveal points of interest and new quests. It's a nice alternative to the tiresome trend of chasing an endless string of question marks all over the map. The game promotes natural exploration, rewarding players with more than just breathtaking views. Whether you're writing Haiku, following foxes to a shrine, or ascending a temple path, almost every activity in the open world rewards armor, a skill point, or an equipment upgrade. Loot aside, exploring Tsushima is its own reward. There's a real sense of tranquility that comes from most of the activities the player can engage in. I often found myself stopping to explore more after a particularly intense mission or fight. 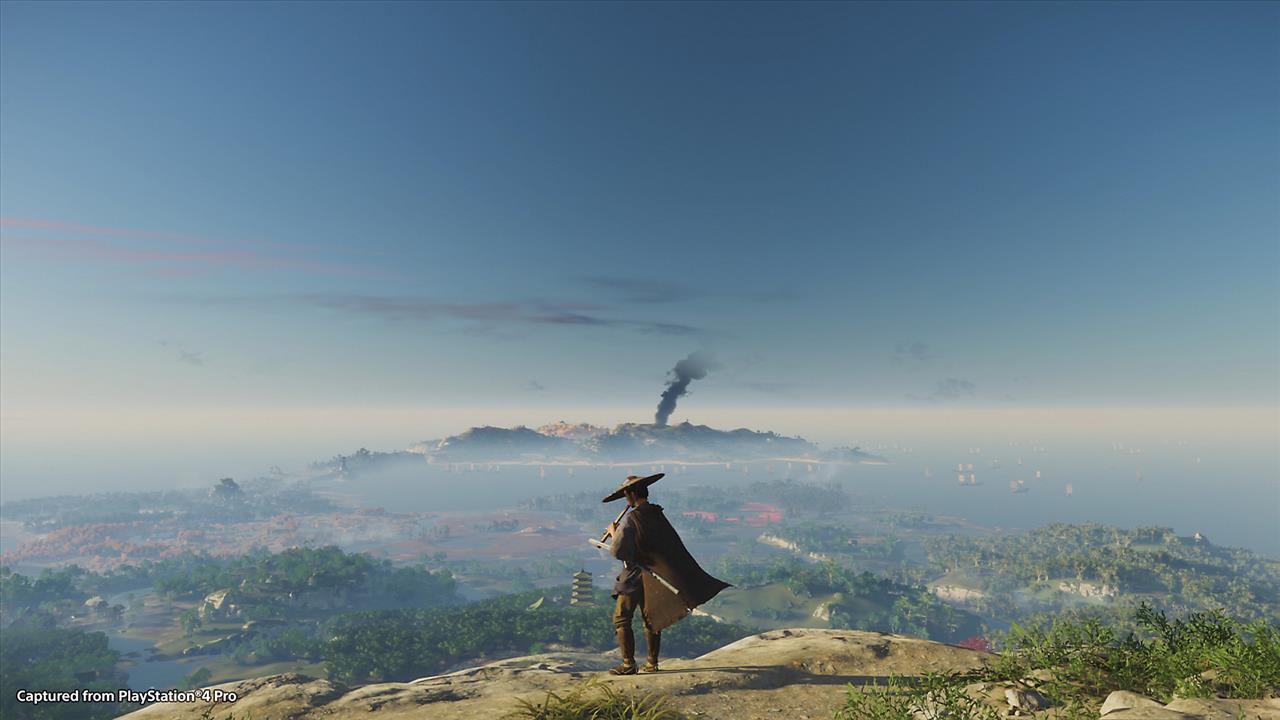 Ghost of Tsushima's story focuses on a Mongol invasion of Tsushima in the 13th century. Players take on the role of samurai Jin Sakai as he fights to free his home from the Mongol occupation. Although it starts a bit slow, the story ramps up in the later acts. It's good all the way through, but some of the arcs in the later parts of the game can be downright gut-wrenching. The story is fragmented into different pieces called tales. Each tale can have multiple missions and generally focus on the stories of Jin's multiple allies.

In isolation, the tales are some of the best parts of the game and give great human connection to Jin and those he allies with. One of the best features of the story and the tales that come with it is how well it illustrates Jin's internal conflict as he is forced to adapt to defeat the Mongols. I won't venture too far down this path to avoid spoilers, but it's worth mentioning that the narrative of the story intertwines perfectly with the introduction of different gameplay mechanics. 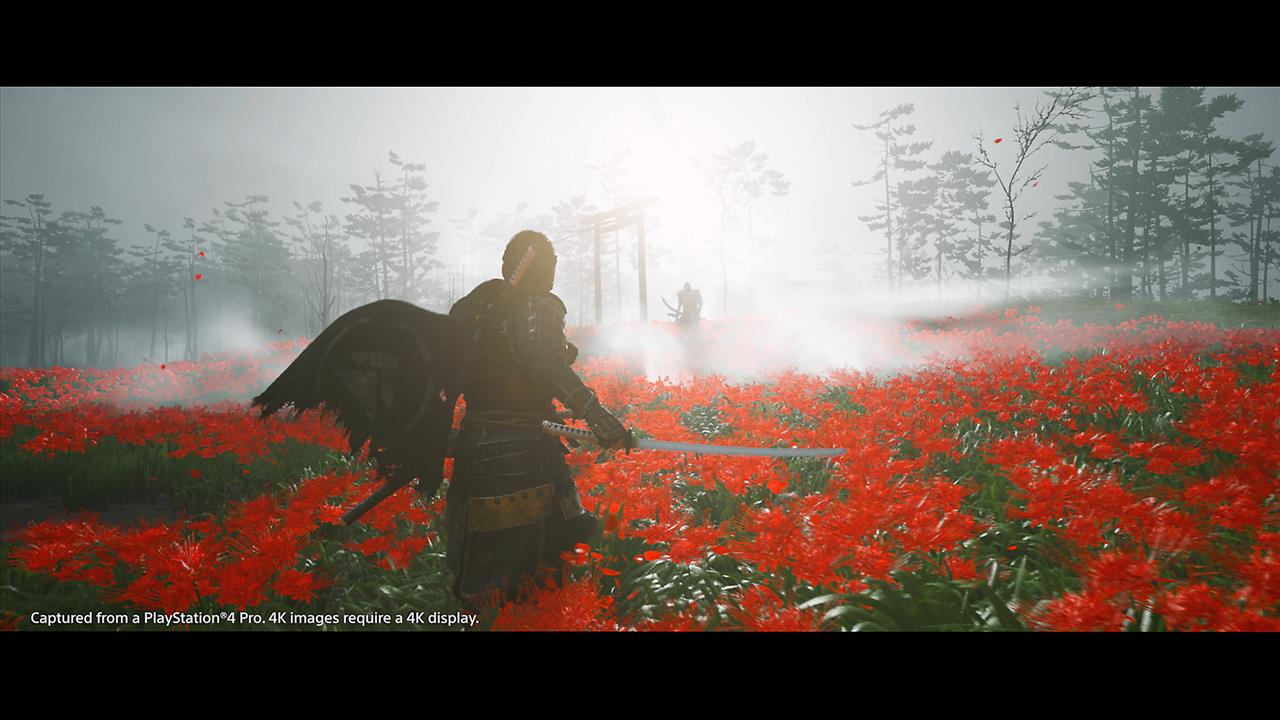 Combat, much like the story, is a slow starter. In the beginning, it's what you'd typically expect from an open-world action-adventure game. Players can use a light or heavy attack, dodge, and parry. Most combat cues are visual, so it quickly became repetitive once I got a handle on the different enemy types. Early on, I found most of the difficulty was getting used to targeting without a lock-on feature and making sure I was careful not to fight too many enemies at once.

As the game progresses and you get more upgrades, the game's power fantasy comes alive. There are several paths to explore as far as weapon and equipment upgrades go, and they all felt largely viable when I started putting points into them. Between weapon stances and the different equipment like kunai and smoke bombs, I found that I was able to work in my playstyle throughout the whole game. 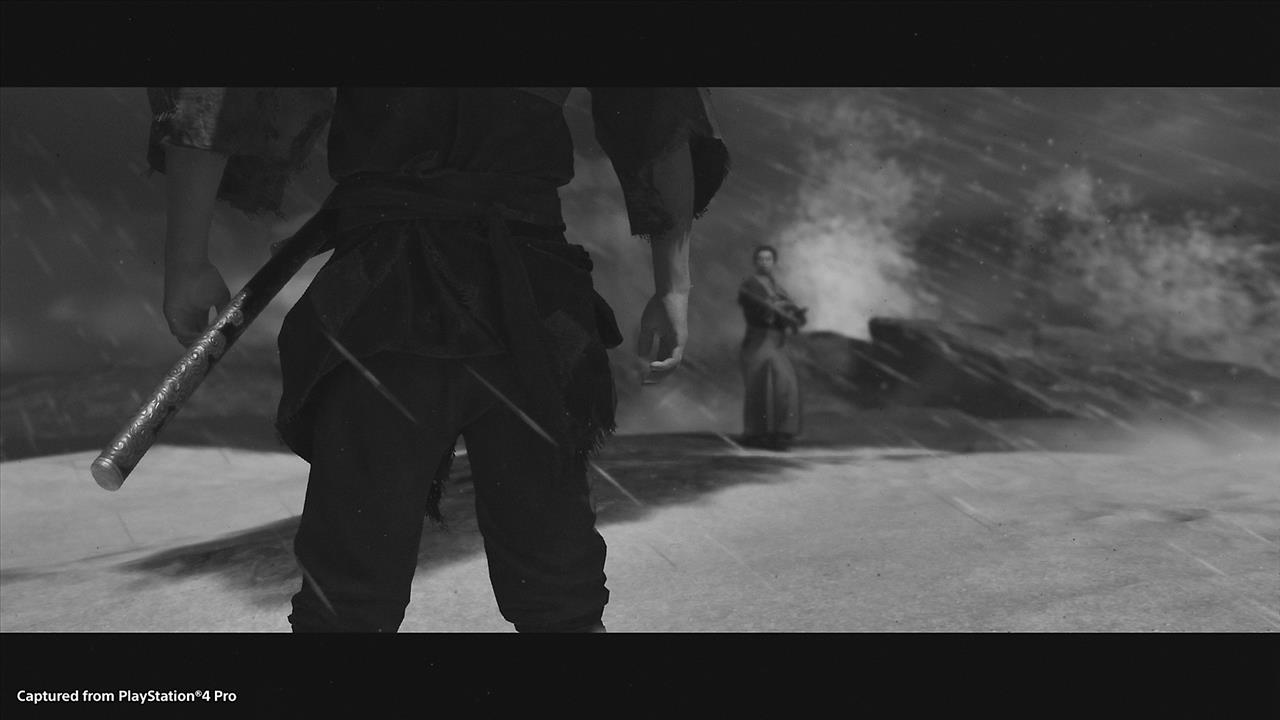 Hands down, the best combat feature in the entire game is the standoff mechanic. When you approach a group of enemies you can trigger a standoff. Once initiated, you challenge a single enemy to a fight. As they begin their attack you can retaliate to eliminate them in a single blow, and then traditional combat begins. The maneuver isn't without risk, however, as mistiming your attack causes you to take massive damage. It's a tremendously good feeling to nail a standoff, and the additional upgrades you can get allow you to chain together standoff kills, reducing the enemy numbers by a few before combat even starts. Ghost of Tsushima is, of course, filled to the brim with samurai references, but the standoff functionality takes my award for the thing in the game that made me feel the most like a samurai.

The stealth in Ghost of Tsushima is an interesting mechanic. As a lover of stealth games, I went in expecting to challenge myself to play as much of the game in stealth as possible. Although I think this is technically possible, it doesn't feel like it's the way that stealth was meant to be used throughout the game. The implementation is pretty similar to other games, featuring assassination, visual detection meters, and a "ghost" sense allowing you to detect enemy movement through walls. 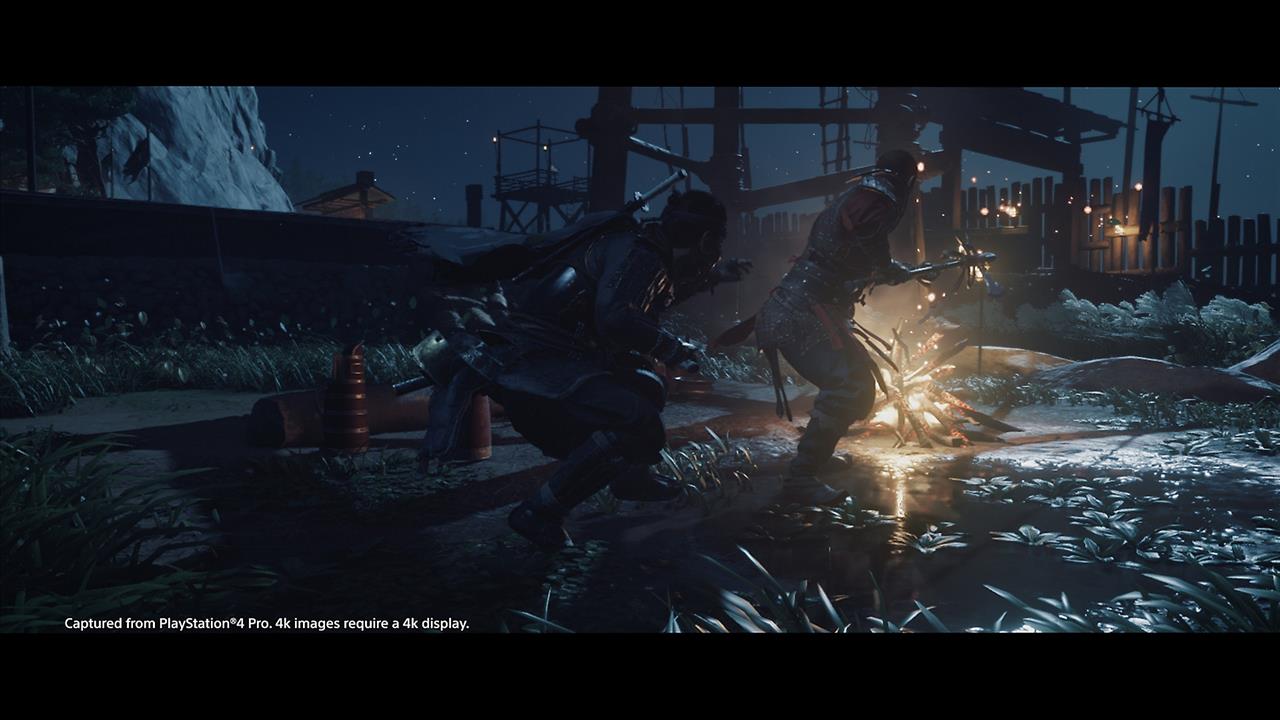 After trying to fully commit stealth in a few different areas, I found that it felt more like the stealth was meant to be used as a tool to thin out enemies. This runs parallel to things like standoffs, which allow you to whittle down the enemy numbers before committing to the full fight. There are a few encounters throughout the game that require stealth, but they seemed to be designed in a way that facilitates it, more like a puzzle than traditional stealth gameplay. More often than not, I found myself using stealth to eliminate a few key enemies before initiating a standoff, just to make the ensuing fight easier. Not to mention that some of the key thematic elements of the game make choosing between stealth and traditional combat an impactful choice concerning Jin's perceived code of honor. Kudos to Sucker Punch on that, as it's not often I play a game where I feel an emotional response to how I choose to dispatch enemies.

Although these don't fit perfectly into any of the categories above, there are a few minor details in the game I wanted to focus on. First, the use of wind as a guidance system. Rather than a mini-map, compass, and a waypoint, the wind simply guides you to your current objective. It's such a  simple and elegant solution, and that alone removes so much visual clutter from the screen. Plus, it creates a sense of directionality. It gives me something to move toward but doesn't insist that I go that way now. The use of the wind as a guide unconsciously reminded me that I didn't need to rush to where I was going. 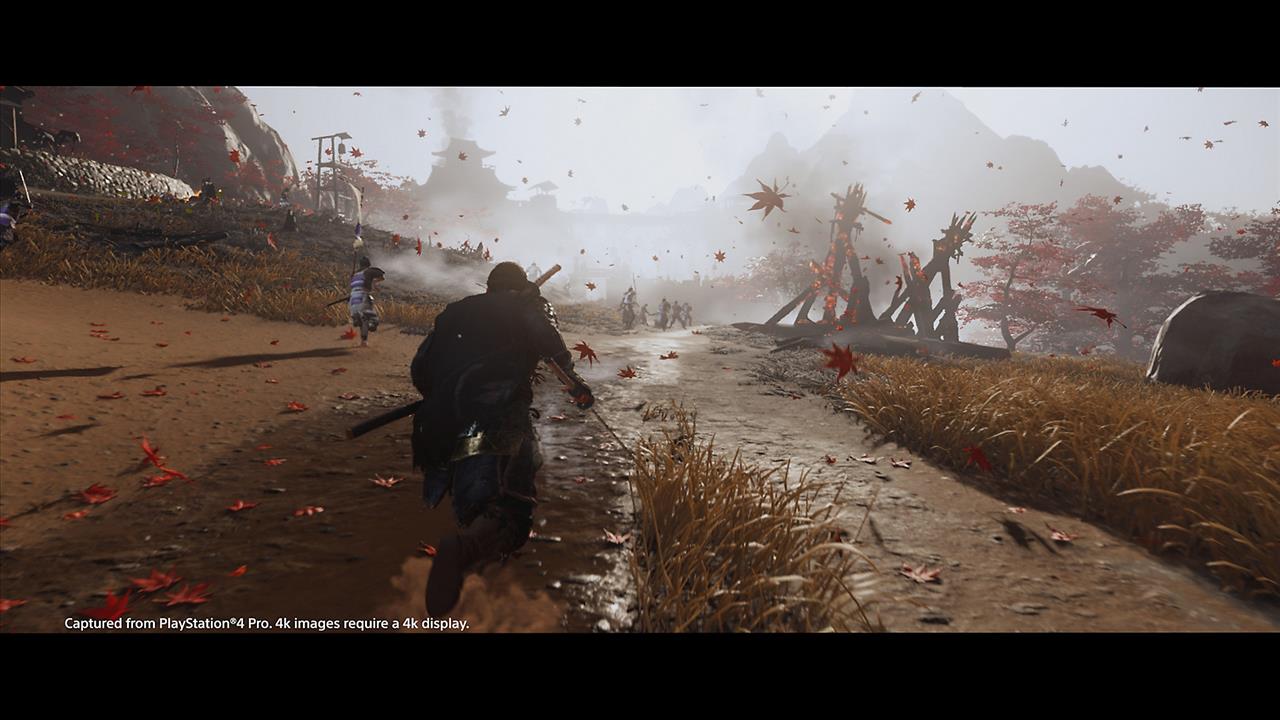 Next is the controller touchpad. I don't play a ton of games on the PS4, but Ghost of Tsushima has to be one of the best uses of the touchpad I've seen so far. It binds with the wind mechanic, allowing you to create a gust of wind towards your objective with a quick swipe of the pad. Other than that, it governs some simple actions like sheathing, bowing, and playing the flute. It balances the simplicity of function with useful mechanics and even has some visual clues in-game that can help remind you what it does if you forget.

The last thing I'll talk about is an extremely minor detail that feels like such a perfect addition to the game. As a longtime player of action-adventure and RPG games, I'm all too familiar with the quandary of keeping pace with an NPC. It seems like on every "walk with me" quest, the NPC either moves slightly faster or slower than me. It's immensely frustrating having to constantly stop and start to keep pace. Ghost of Tsushima seems to effortlessly solve this problem by just having NPCs match your pace. This seems simple, but it also occurs when the NPC is leading you, as they'll just stay a bit ahead of you regardless of which speed you choose to go. It's such a small thing, but it makes all those missions go so much smoother when you're not playing a hidden minigame to make sure you stay on pace with the NPCs. 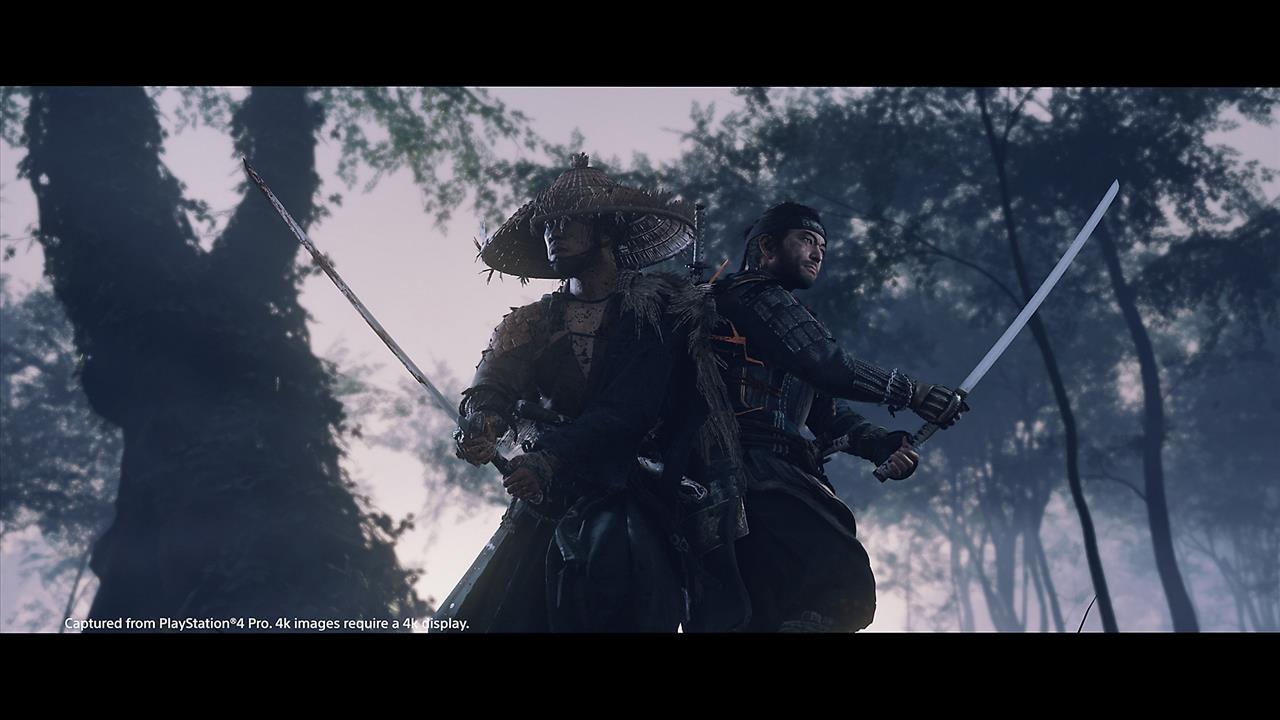 With stunning visuals, a deep and interesting story, and a combat system with more depth than you'd initially expect, the game delivers on a much sought after samurai experience.

Ghost of Tsushima is a beautifully crafted adventure that distinguishes itself as one of the great titles of this console generation.