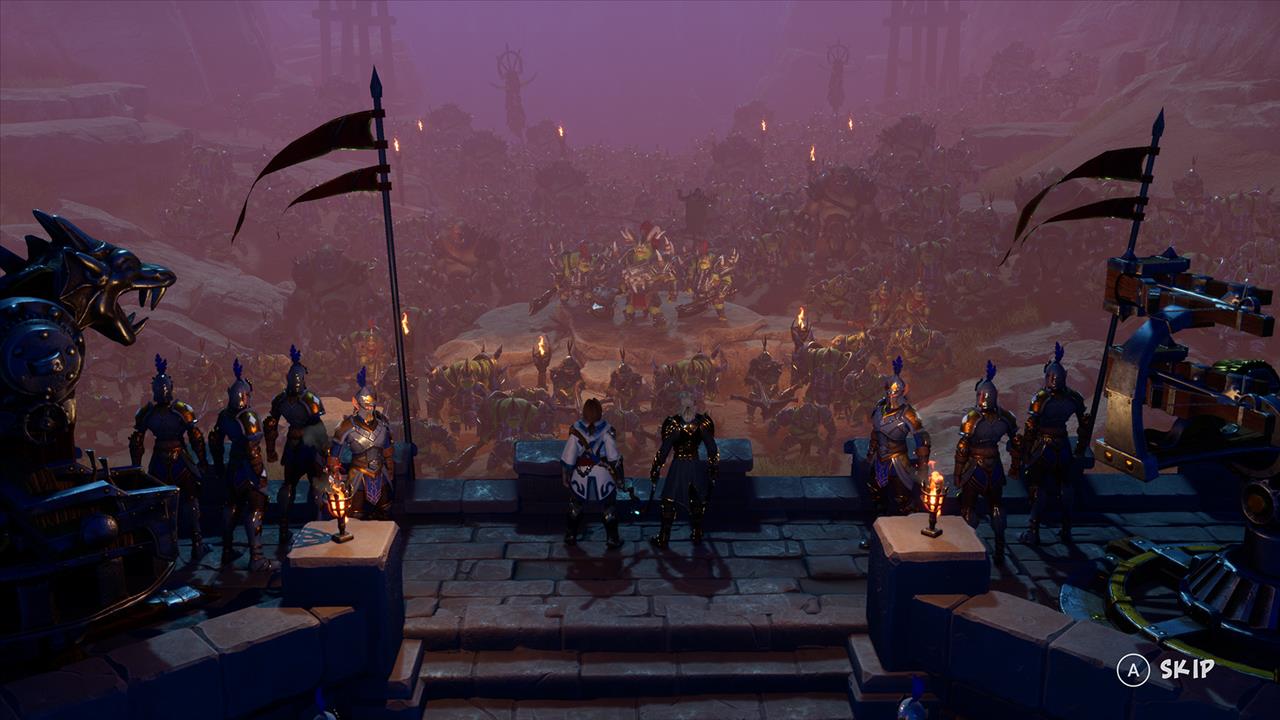 If you are anything like me, you probably have an Orcs Must Die! title lurking somewhere in the labyrinths of your various gaming libraries. I took a quick look and, sure enough, I have the first two games in my Steam account, and the free-to-play version in my PS4 library. While it doesn’t make a ton of noise, the franchise has always been what I think of as “low-key-super-popular.” Orcs Must Die! games don’t typically make the covers of gaming magazines, but a lot of people play them – and a lot of people love them. 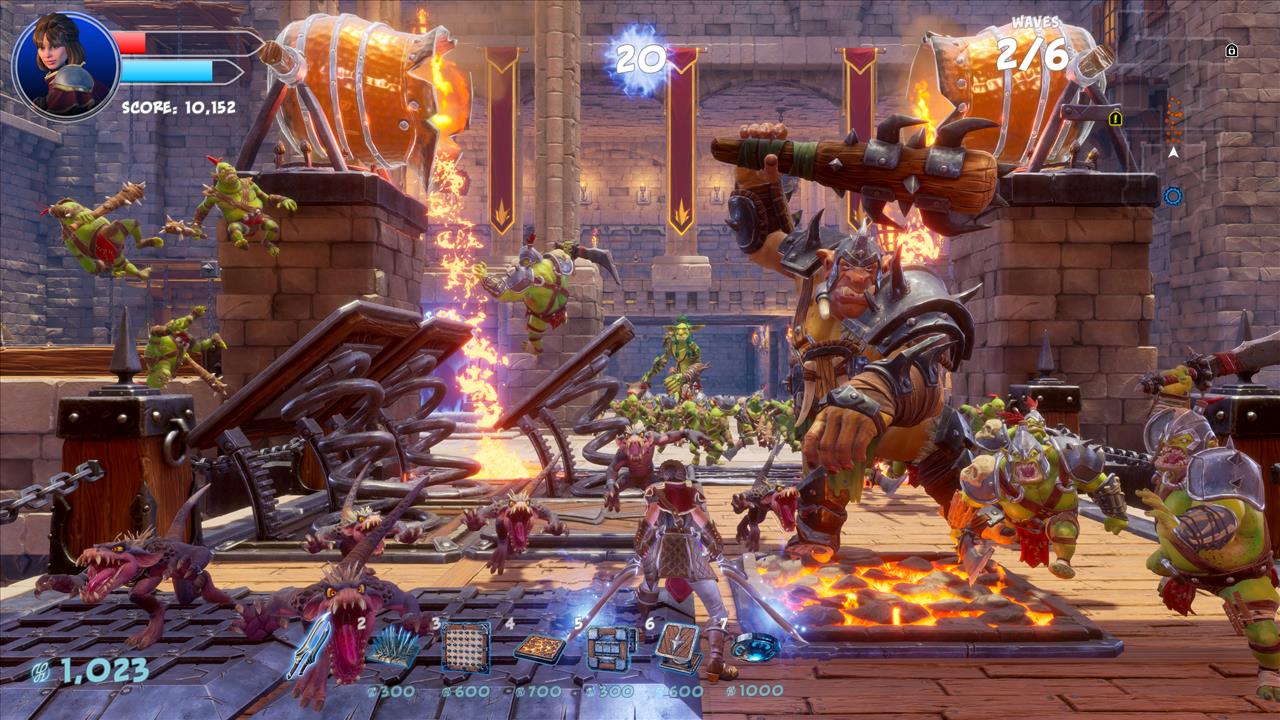 It was a touch of genius that Stadia managed to finagle a timed exclusive with Orcs Must Die! 3. While this may be a “niche” game, the franchise has enough cache with the gaming community at large that plenty of new heads will likely turn Stadia’s way. Another point for Stadia – I received review code on vacation, and merrily played the entire game in my sister-in-law’s kitchen on my tiny travel laptop. Worked like a charm. Internet access = Stadia = fun anywhere.

If you have played a previous Orcs Must Die! title, you likely know what to expect from the new game. Robot Entertainment has switched up the playable characters – the new kids are a little less versed in orc-slaying than the champions from the previous games, which leads to a “learning” story element that works well in the context of the game. The characters are basically orc-slayers in training, which adds some life and humor to the proceedings. Watching them youthfully dance and celebrate a successful slaughter is a hoot. 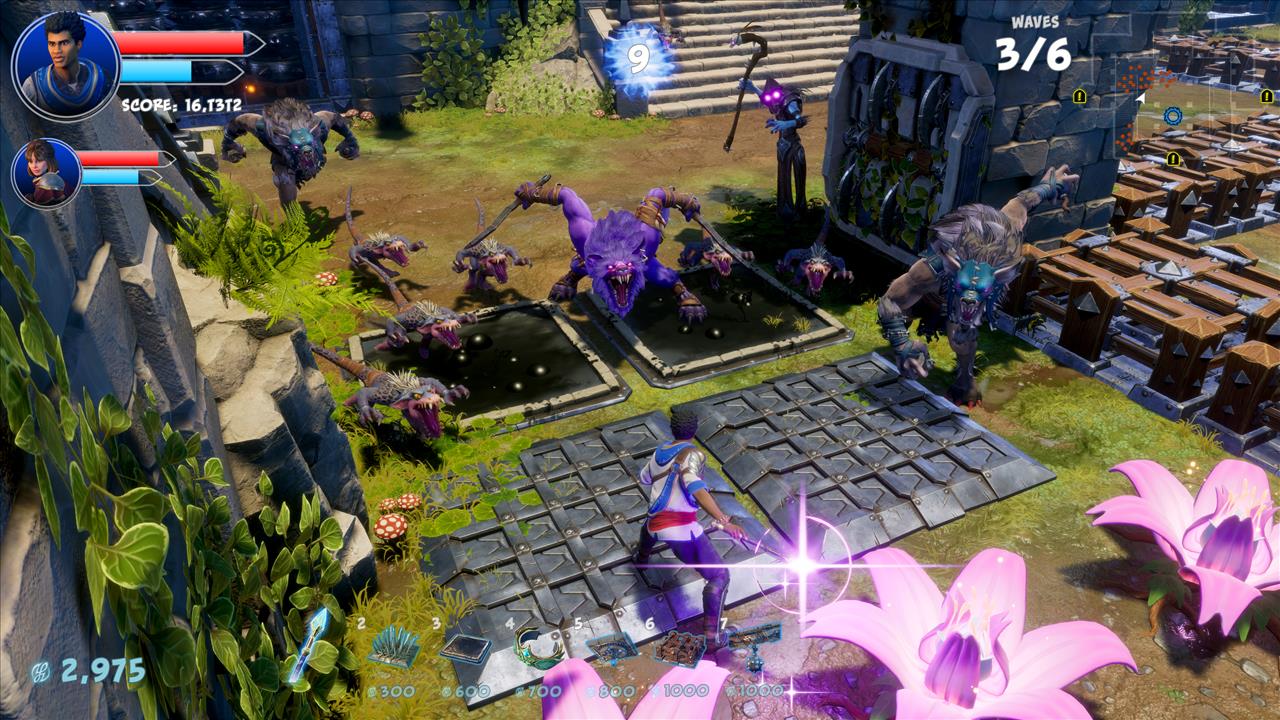 A few extremely well-animated cut scenes sketch out something resembling a story, but only franchise superfans are likely to be too engaged in the historic goings-on. While I didn’t skip the story scenes – the animation really is nice – I couldn’t really tell you what was happening. Most of the story segments are just connective tissue to shuffle the player from killing chamber to killing chamber.

The meat of the game is the tower-defense/third-person shooting hybrid gameplay that franchise fans have come to love. Players are given access to a series of hallways. A gate on one end will soon be overwhelmed with orcs. A portal on the other end must be protected at all costs. The player must set up traps in the hallway to take out as many orcs as possible once they come crashing through the gate, and then clean up the leftovers with a variety of ranged weapons. 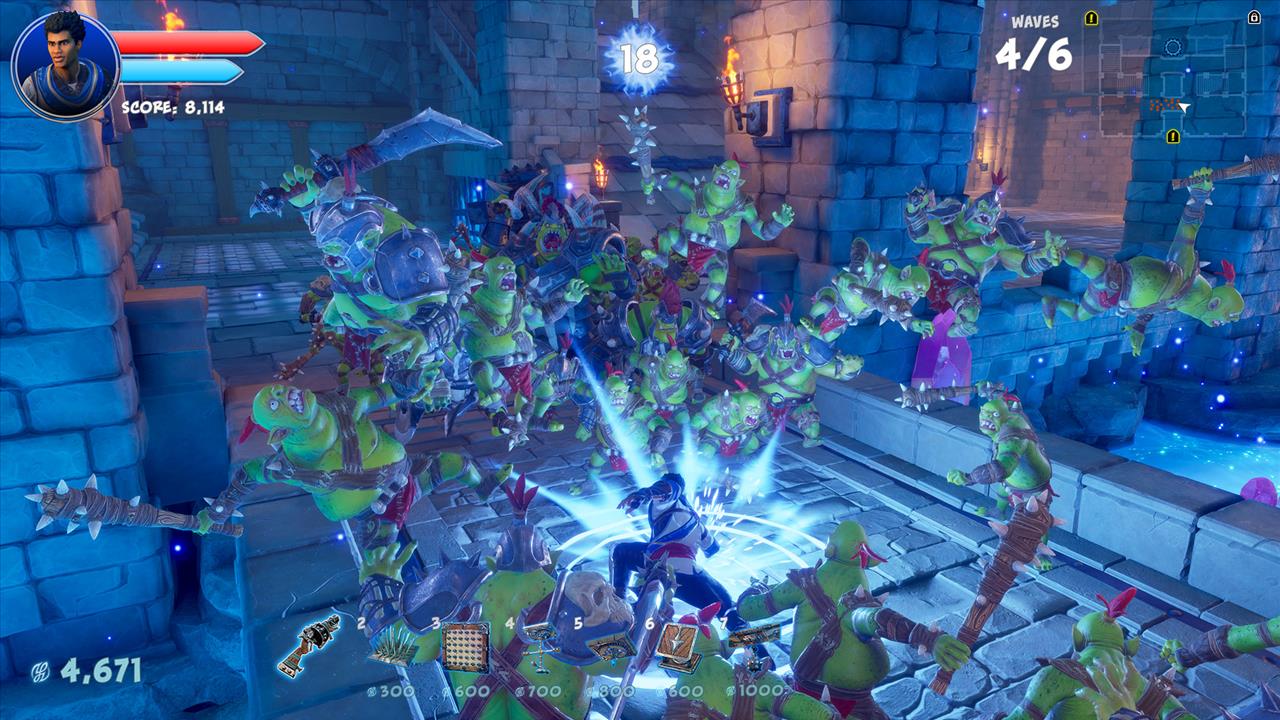 You start the game with a few simple traps: floor spikes, wall darts, etc. But good performance earns you “skulls,” which you can then use to upgrade your traps and buy new stuff. A variety of additional traps are also unlocked simply by playing through the campaign. Before long, you will be figuring out wickedly lethal combos, pushing orcs this way and that, grinding, shooting, and burning them to pieces.

Traps cost money. You can’t just lay them down willy-nilly. So after you blow the budget before the first wave starts, it's always good to have a plan as to where you want to lay more traps when the orcs start flowing (and dying), and the cash starts rolling in. Not only can you shoot the orcs as they march forward, but you can also lay down additional traps on the fly, leading to some questionable (but fun) split-second decision making. In between waves, players get a short reprieve to strategize and lay down additional traps – which is a mighty good idea, as the waves on each map get exponentially larger and more difficult as the level progresses.

The campaign is made up of 18 maps. That may not sound like a lot, but is actually enough to keep you busy for quite some time, when you consider that each map has between six and eight waves of baddies to clear. It took me about 10 or 11 hours to work my way to the end of the game, though I imagine that more skilled players could wrap things up a little quicker.

Things start out simple, but quickly become mind-bendingly complicated, asking players to defend their portal against orcs coming through multiple entry points, from a variety of angles. Various enemy types, with different power sets and elemental resistances, add to the challenge. 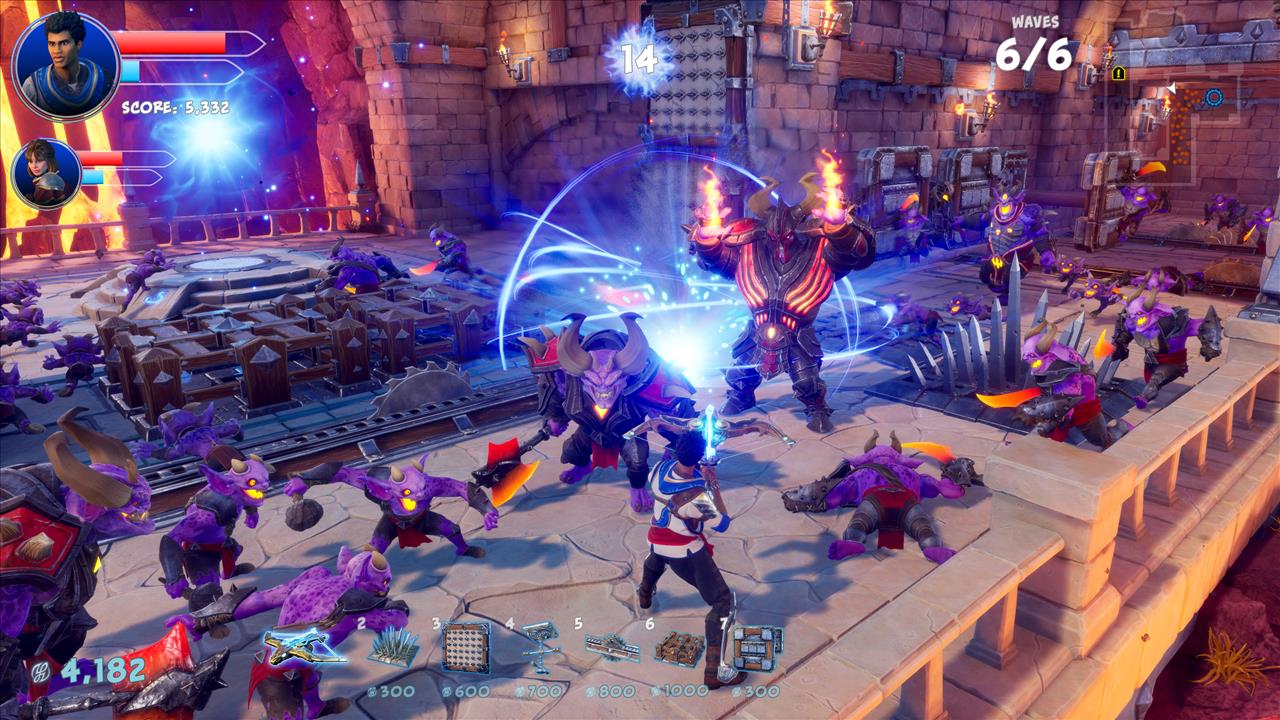 I found all sorts of bizarre solutions to difficult problems, sometimes on the fly. Often relying on floor-based fire traps, I had to severely change up my game when I was suddenly faced with fire-based opponents. Utterly horrified when they marched over my traps unfazed, I quickly pivoted to filling the portal room with solitary archers – about 60 of them, eventually. Any orc unfortunate enough to set foot in that room was absolutely buried under a barrage of incoming arrows.

Levels are broken up by the occasional “war” level – maps where players have access to more powerful weapons, but face amazingly huge numbers. These maps are super fun, as you cannot help but feel overwhelmed when you see the size of the armies bearing down on your solitary warrior. Mowing them down with advanced magical war machines is a delight. 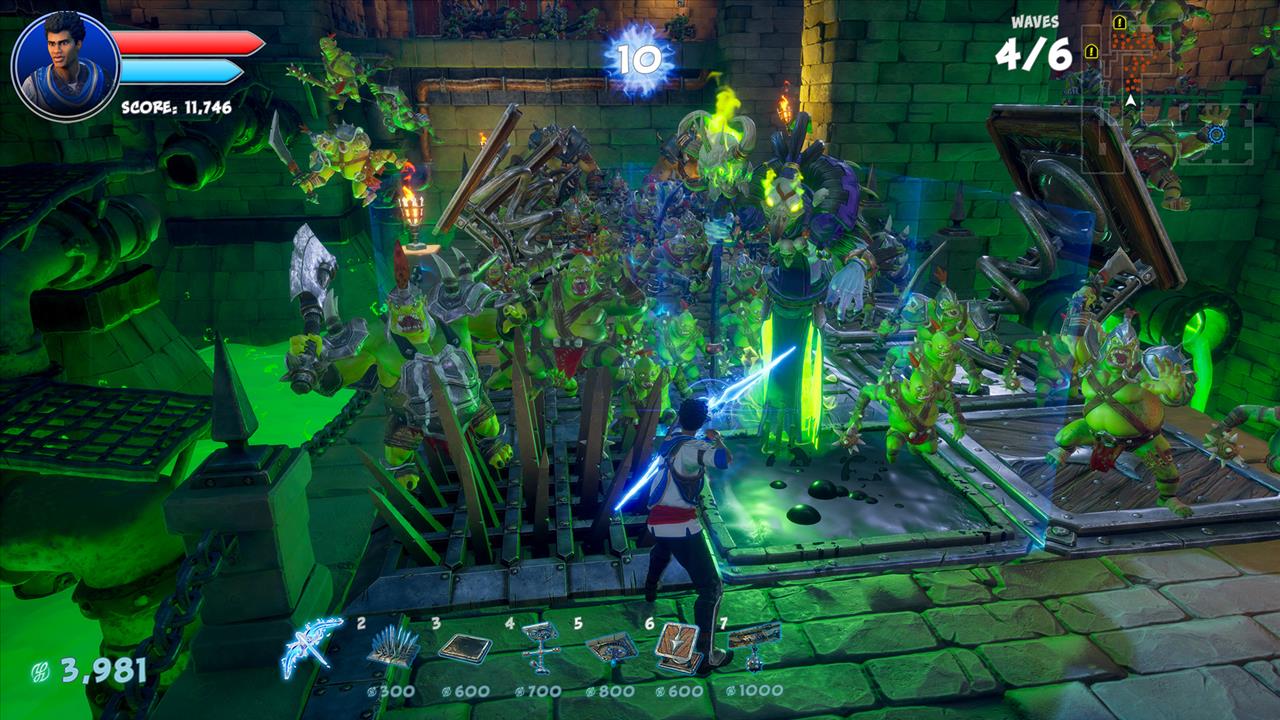 While I made it through most of the game with the sense that I was being challenged in a fun way, there are some difficultly spikes towards the end of the game that begin to feel a little unfair. Orcs Must Die! 3 can be played in multiplayer with two players cooperating, and it feels that a few of the later maps were designed to really push players to partner up – making it extremely challenging to succeed alone.

Playing solo when you have orcs bearing down on you from three directions and you only have enough money for traps to cover one, you have to be extremely agile with your shooting if you have any hopes of surviving. I found myself dashing between trains of orcs, blasting them back before displacing over to another. It is chaos, and though succeeding eventually is satisfying, given the nature of earlier levels it just feels like it shouldn’t be that hard. 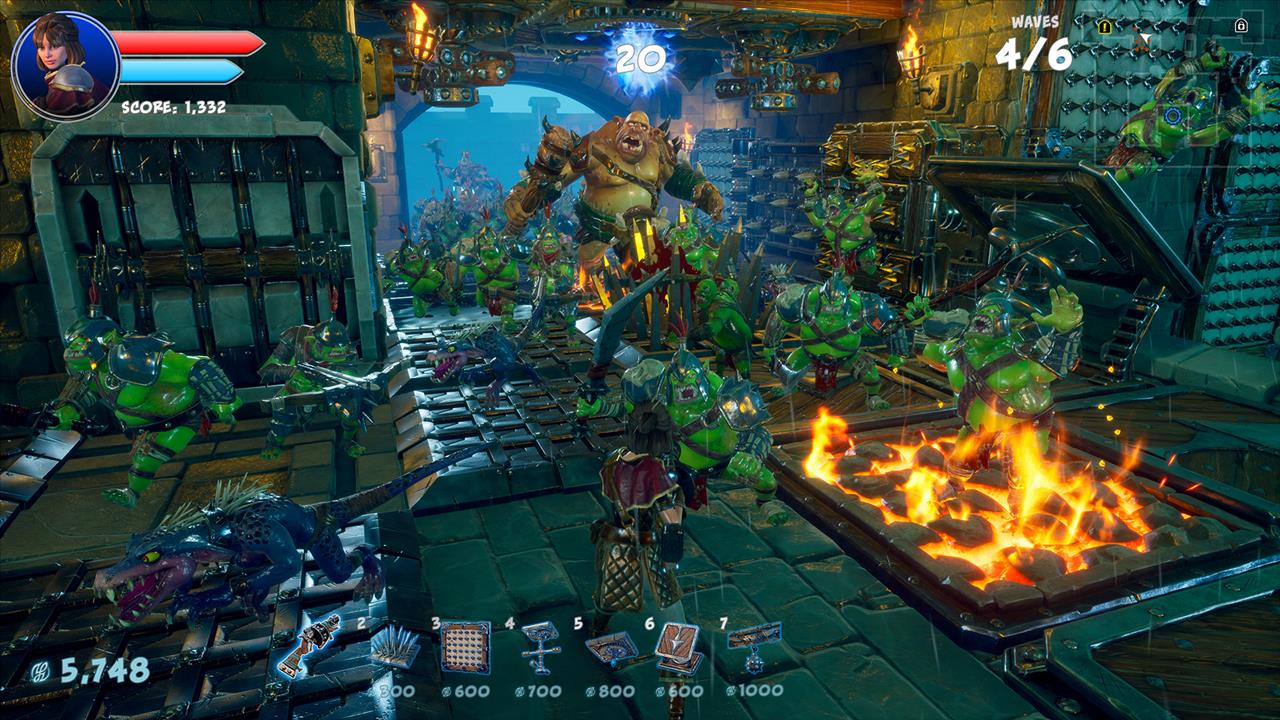 Of course, it is possible to dip back into earlier levels with better traps and up your score, grinding for skulls to build up your supply of deadly goodies. The game is very generous in allowing players to bounce around between previously defeated levels, and its fun to go back to early levels and smack the hell out of them with advanced munitions. There is also an “endless” mode which allows for some grinding as well, though the rewards for performance seem a little skimpy. In the end, you can grind to overcome some difficult areas, but I wish you didn’t have to. Orcs Must Die! 3 doesn’t feel wildly unbalanced, but progression doesn’t feel quite right, either.

Luckily, the good far outweighs the bad. The game looks and controls great. Everything about how Orcs Must Die! 3 works is communicated in a few quick instructional screens with text and a few arrows. There is next to no learning curve, as the controls are intuitive and the flow of the game is almost magically easy to figure out. New traps need to be tried out to see what they really do, and part of the fun is figuring out how everything works together. Everything here is honed down to a fine shine, polished and delightful.

Stadia has been choosing a lot of winners for their exclusive games. Whoever is making these selections has some pretty great taste. Orcs Must Die! 3 is no exception. While the game doesn’t deliver a ton of changes to the formula that fans love, there are enough small changes that they will likely be very satisfied by what is on display here. Orc killing never looked, felt, or controlled better than this. Fans will do well to jump on board with Stadia to play.

Orcs Must Die! 3 contains a ton of the tower defense/shooting hybrid gameplay that fans love – all delivered in a very polished package. The new war-sized levels deliver a massive jolt of fun, and there is plenty of content here to keeps players busy for quite a while. Though progression feels a little unbalanced in single player, perseverance or grinding will eventually overcome obstacles.