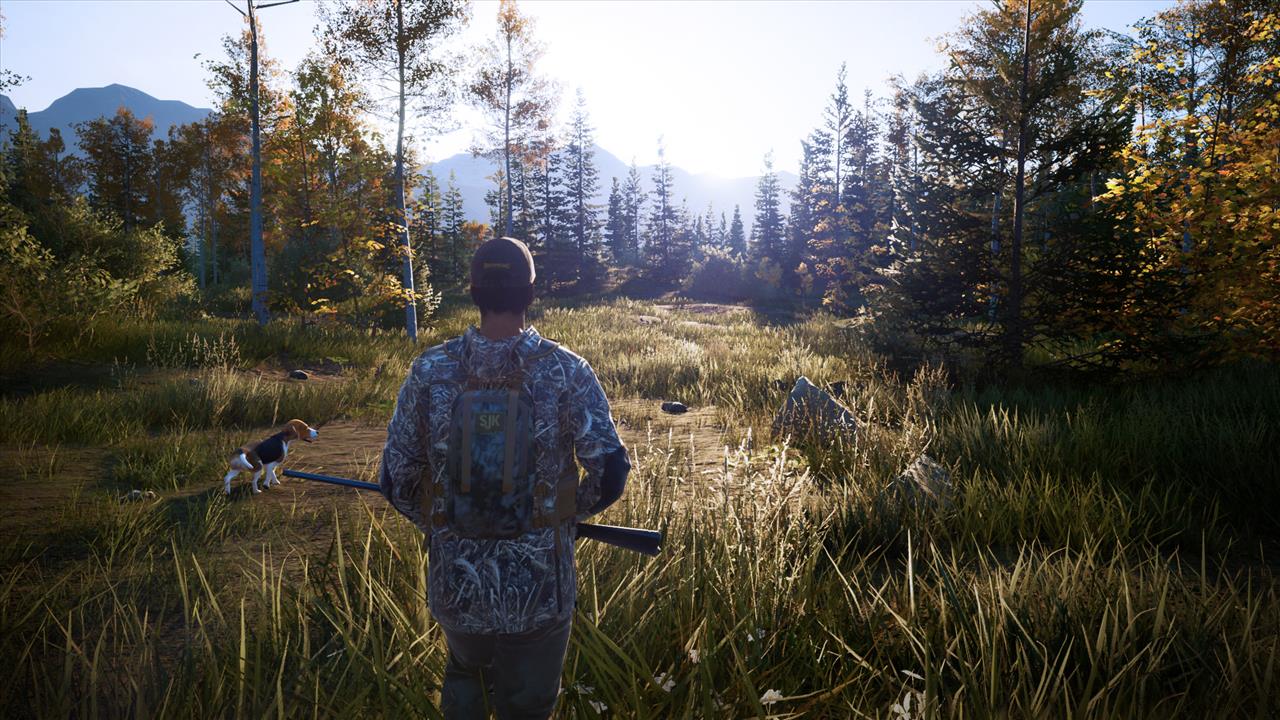 I’m not a hunting kind of guy. I’m not a hunting simulator kind of guy either. Or so I thought. One day I realized something I’d been doing in the video games I’d been playing: I was turning those non-hunting games into hunting games. Or if there was a game that had hunting as a side thing, I’d make it the main thing. Some people insist that side quests are better than main quests. Other people are dying for fishing to be added to their RPG. I had basically become both of those people.

Non-hunting games never taught me much about hunting in any real sense, though. Not like Hunting Simulator 2. Due to a lack of in-game info, however, I’m googling up age-old debates between .270 vs. .30-06 ammo. I’m learning that those types of ammunition are pronounced “two-seventy” and “thirty-aught-six.” I mean, saying thirty-aught-six out loud sounds like I’m helping Abraham Lincoln punch up his Gettysburg Address, four score and seven years ago.

I’m thrilled to be in these large, realistic maps, watching which way the wind blows, sifting through my closet for safety orange ball caps and camouflage jackets, then admiring the dead, stuffed animal heads on my wall. Sometimes the sun spreads its godrays through the clouds, or you're inspecting a rifle with some lovely gun stock engravings, and Hunting Simulator 2 pumps out some lovely graphical moments. Other times, the faraway landscapes through your binoculars, or the startlingly bad motion blur, or some stiff animations between you and the animals, put a bullet between the eyes of immersion. 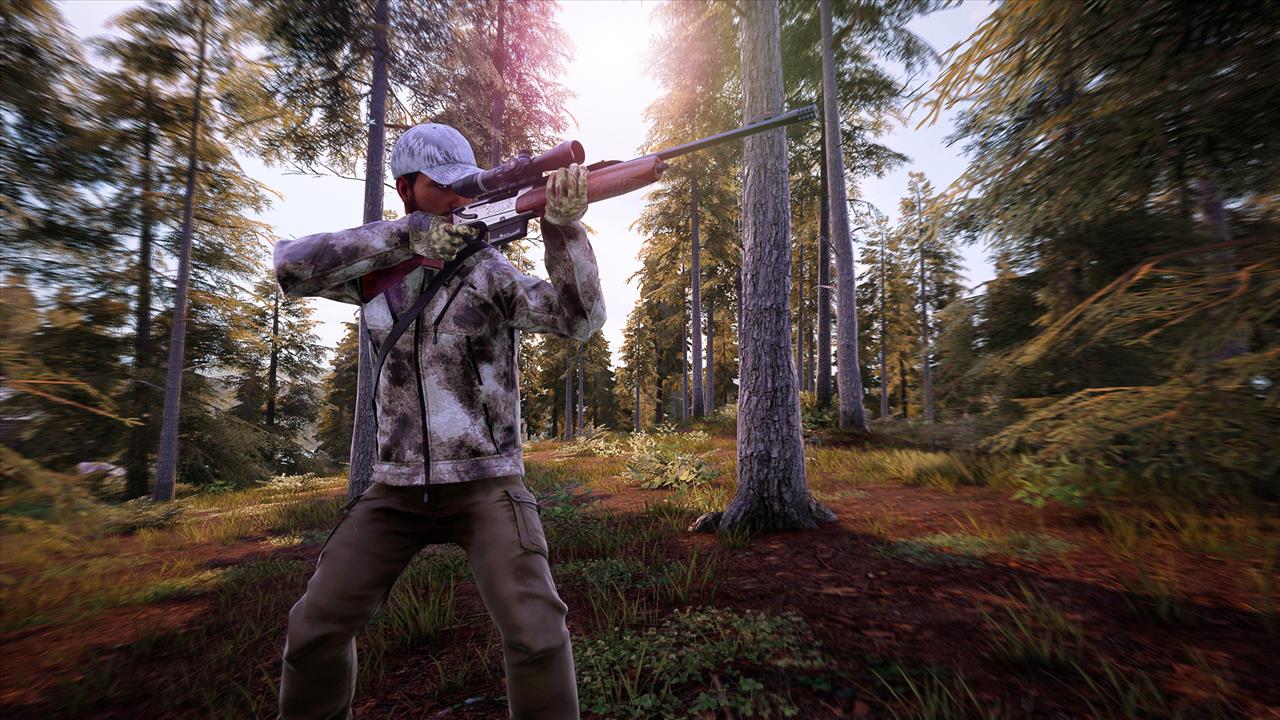 The game should be training me a little better at this. Anxious to shoot something, anything, I bought up as many licenses as I could for the Harghita County woods in Southeast Europe. Finally, I was going to shoot one of those gray wolves that seemed to be everywhere, even as I was looking for absolutely whatever else I could find.

I was 30 minutes into my hike before my hunting dog found some fresh urine from a gray wolf. Then I heard the wolf’s howl. It was within 100, then 90, then 80 yards of me. I got down on my stomach and centered the gray wolf in my cross hairs. Then and only then did the game warn me that I had the wrong caliber bullet in my rifle. Too big of a caliber? Too small? Didn’t say. All I knew was, I’d bought this fancy backpack for upwards of 750 credits, and it didn’t have the right caliber bullets rattling around in there either. 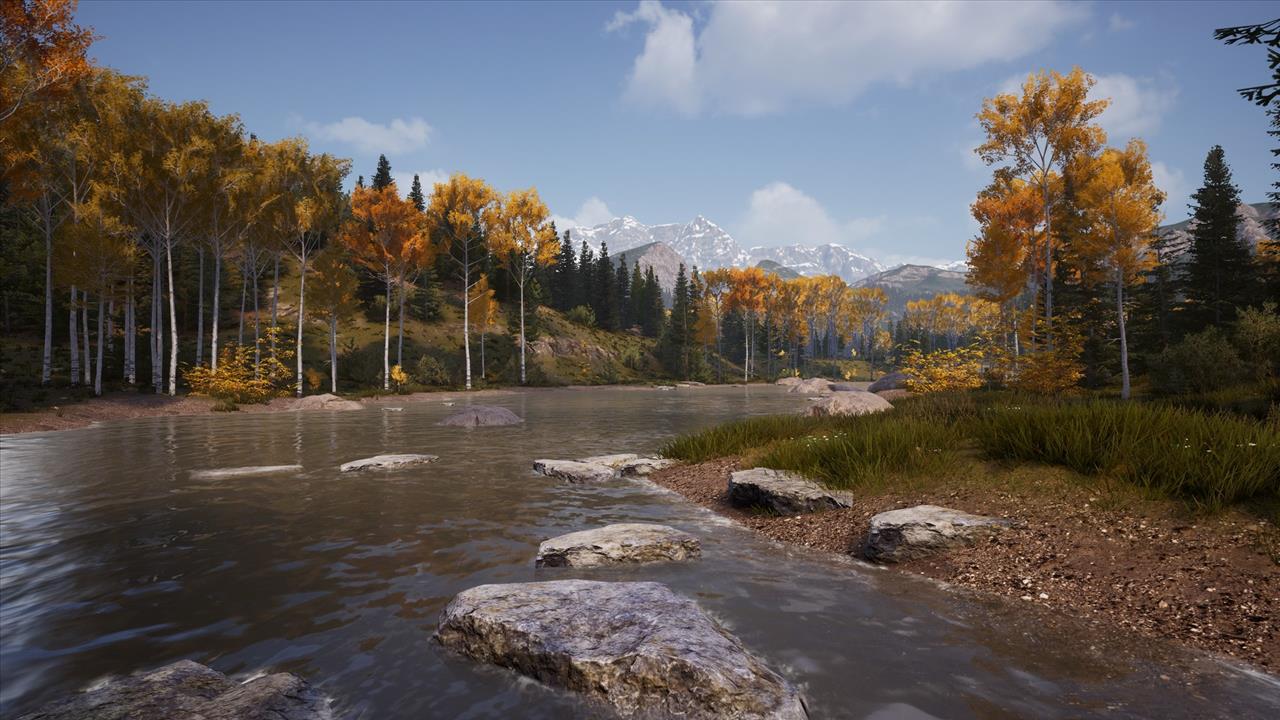 Despite some slightly exotic locations, at least compared to my lack of airline travel during quarantine, a lot of the places hit home right away. If you told me that the woods of Transylvania were based on photographs taken in Oregon, I would believe you. Orange skies in the morning or rainy by lunchtime, yes, I’d still believe you. I can’t speak for Texas or Colorado, but both of those other locations have some incredible views at medium range, too.

Out there on these long walks, I’m having to read the lie of the land with the focus of a pro golfer. I’ve never been more frustrated by a lovely tuft of ferns than when they’ve hidden my quarry that I’ve been tracking for a full 30 minutes. Or when I’m staring out at what looks like some Little House on the Prairie plains, to have my target dip under a very low, very smooth-looking ridge, only to never be seen again.

Never thought I’d be delighting in finding a long line of sight running across a field of knee-high grasses, especially after coming out of thickets of pine trees so dense I could hardly see my hand in front of my face. But that’s part of getting good in Hunting Simulator 2. Getting ahead of your prey, finding yourself downwind, peeling a long sight line out of the topography, and pouncing like the apex predator you are (at least with that boomstick). 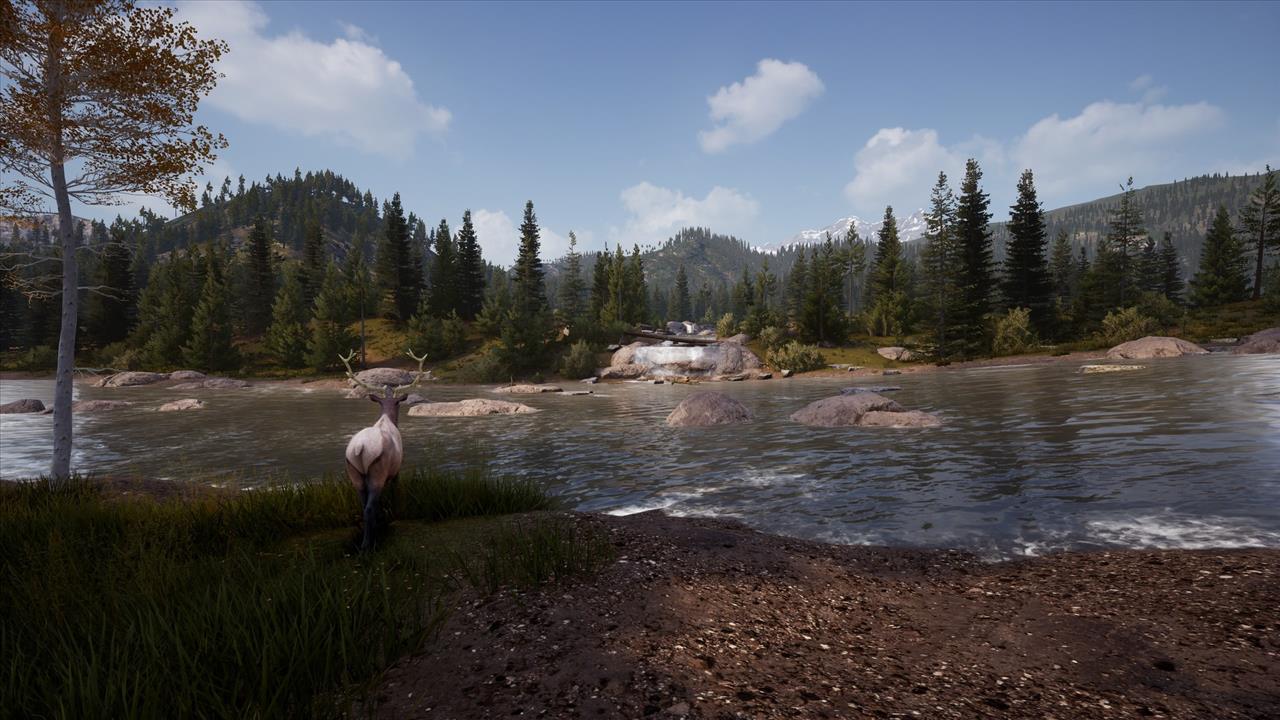 Of course, the realism has me gauging just how convincing this animal A.I. really is. If I can see them, does that mean they can see me? Am I harder to see if I’m crouching in ferns, or am I just making more noise as I crawl through the foliage? Is it okay to sprint after an animal I’ve shot, or is running an automatic fail button? I want to know if these animals have persistent routines that exist whether or not I’m on the scene, or is finding an animal just another random number generator of creatures spawning in or out depending on...what, algorithms? Yet, that’s the game, too. There are going to be entire gameplay sessions—up to an hour long—where you head out, get a promising lead, and watch the trail go cold.

At the very least, no matter what, my relationship with my dog, Beagle Bailey, can always steadily improve, along with the dog’s skills and abilities. No time spent out on the hunt is ever a complete waste, then. It’s funny to note that Hunting Simulator 2 isn’t a role-playing game—except for the dog. The dog has a set of skills and abilities that can be improved upon, whereas you do not. And honestly, Beagle Bailey trying to get doggy pets from me is just him picking the bromance dialogue options correctly, isn't it? Am I making this RPG analogy weird? 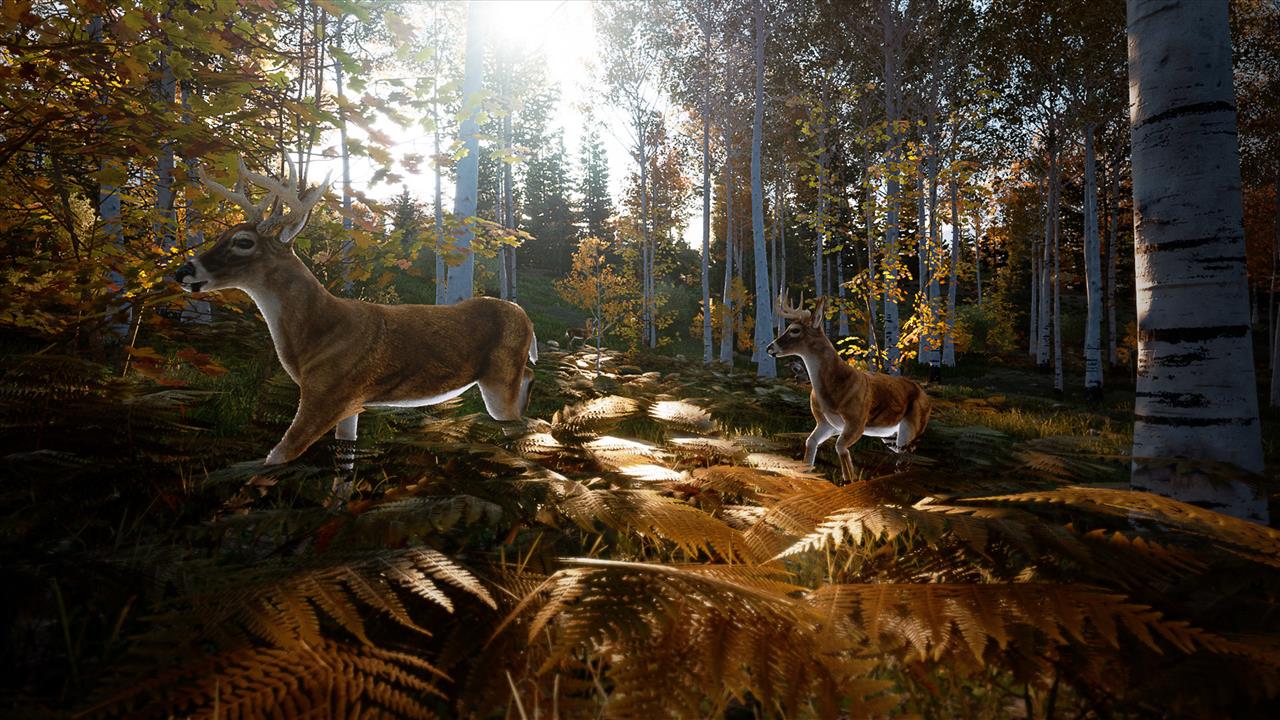 I’m desperate for a photo mode, especially one that lets me do those weird poses with an animal corpse. You know, where you’re kneeling behind a dead elk, holding its head up by the antlers. Look, it sounds gross on paper. But trust me, after it’s an hour or two past your bedtime, and you’ve finally nabbed that wily black bear you’ve already been fined for pumping too many bullets into, then you’ll want a photo op, too. And not just one from the static over-the-shoulder or the first-person cam. 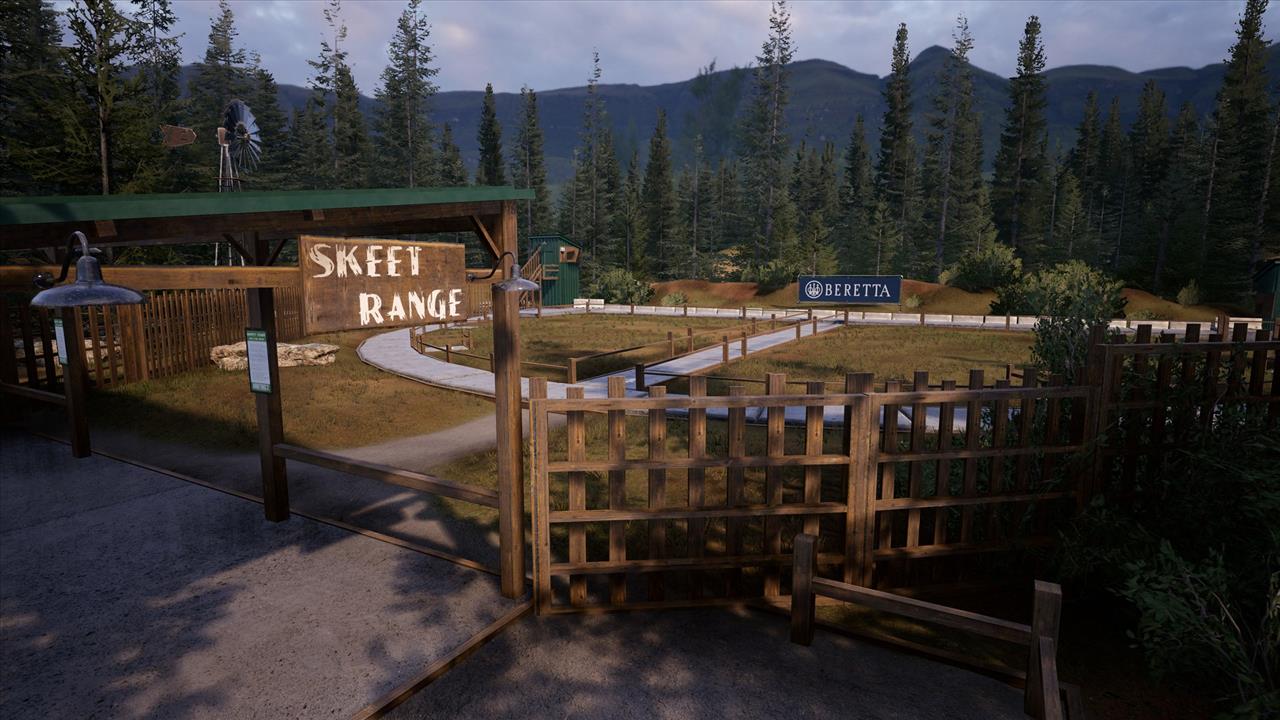 Things are tough enough as it is, but you can uncheck every ounce of help you’re given, too. Uncheck the compass and the sun becomes your navigation beacon. Uncheck tagging animals and your eyes better not lose them in the dense underbrush. Uncheck animal sound tagging, and I hope your headphones are able to simulate surround sound. Heck, it’s even easy to lose a hunting tower that’s only 100 yards away, and that thing is 40 feet tall and standing still.

When you’ve got that many markers turned off, the few senses you’re afforded in a video game—sight and sound—become all the more valuable. Your eyes and ears are all you’ve got. You can’t smell them, but they can smell you. You can’t touch them, but they’d run away if you ever thought you could get that close anyway. Your dog is crucial in some ways, then. Tracking an animal across several miles is exhausting if you're squinting at the screen yourself. The dog, after a dozen hours out there, starts to get better at doing that kind of thing for you. Beagle Bailey was riding the struggle bus in the early game, though. There could be footprints, a blood trail, fresh urine and feces, and ol' pupper would still end up 60 yards off in the wrong direction with a question mark over his head. He got better at it, eventually. 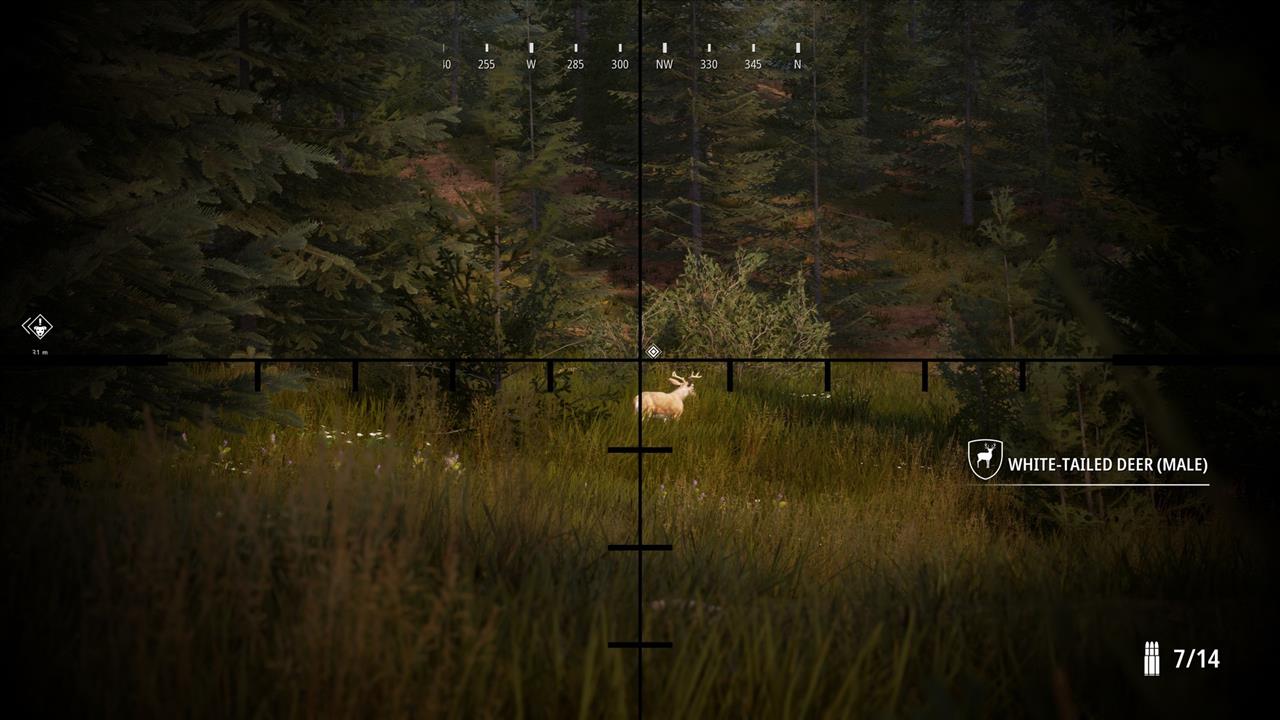 It sometimes feels disingenuous when I go on a miles-long hike, doing my level best as a hunter to find a target, then, 2,000 yards away, back at the ranch, an enormous bison goes strolling past my cabin's front door. I mean, come on. It’s also a land where a bighorn sheep and a bobcat can casually stroll down a hill together, no problems. Thankfully, you’re the only real predator out here. Great cats won’t snatch your deer for you. And you’ll never stroll across an animal corpse you didn’t kill yourself. You don't have a health bar, so that grizzly is never going to chase you down.

It's been real. I've learned a thing or two in Hunting Simulator 2. Like shooting a duck with .30-06 bullets will turn it into paste. Or that you'll never take down a bear unless you’re using the biggest bullets you’ve got. And that you get slapped with a fine for an "unethical hunt" if you shoot something more than three times. That black bear wasn't going down without a fight, though. 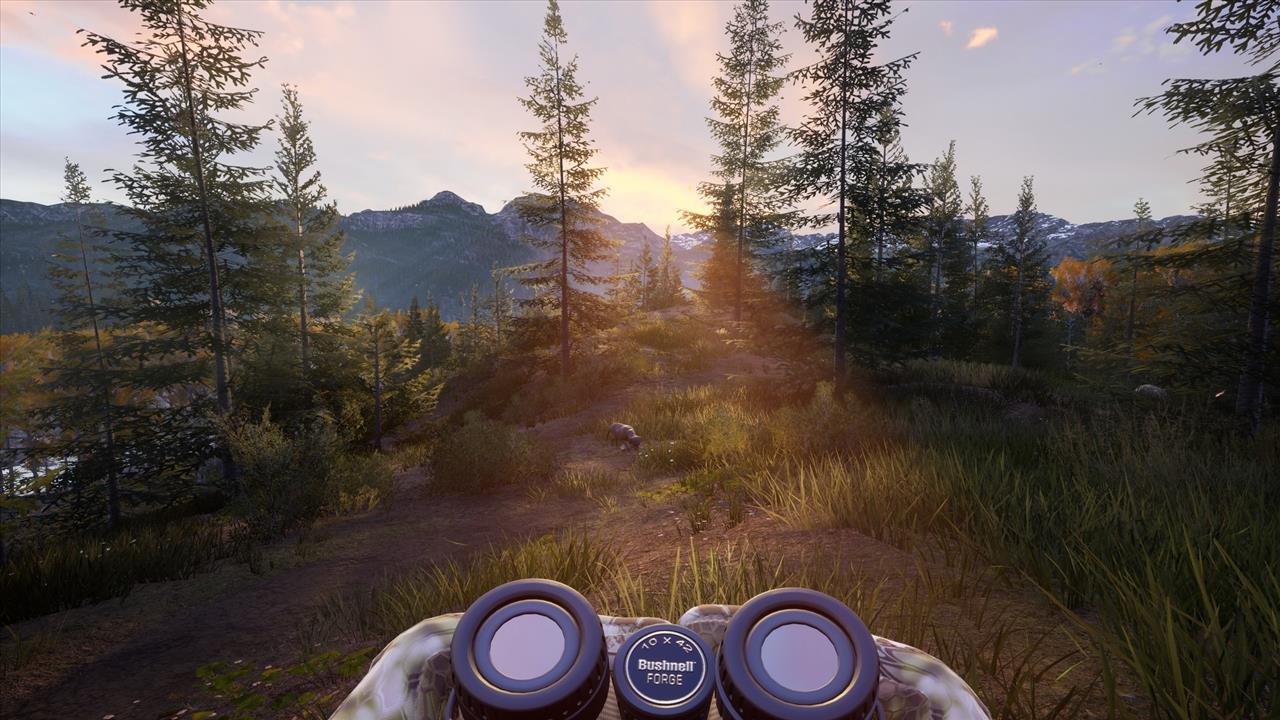 I’ve enjoyed my time here, give or take the clunky inventory and other back-at-the-lodge interface problems. But patience is a currency you’ll have to build up on your own time. I can play other shooters for hours and be ready for another round as quickly as I can lock and load a new clip. But after only half an hour of bird-dogging trails and waiting patiently for some animal to stroll by is mentally taxing in entirely new ways. If nothing else, the game simulates that aspect of hunting wonderfully.

If you like going on long walks, if your favorite color is safety orange, or if you're never taking "must love dogs" out of your Tinder bio, then Hunting Simulator 2 is sounding your mating call.