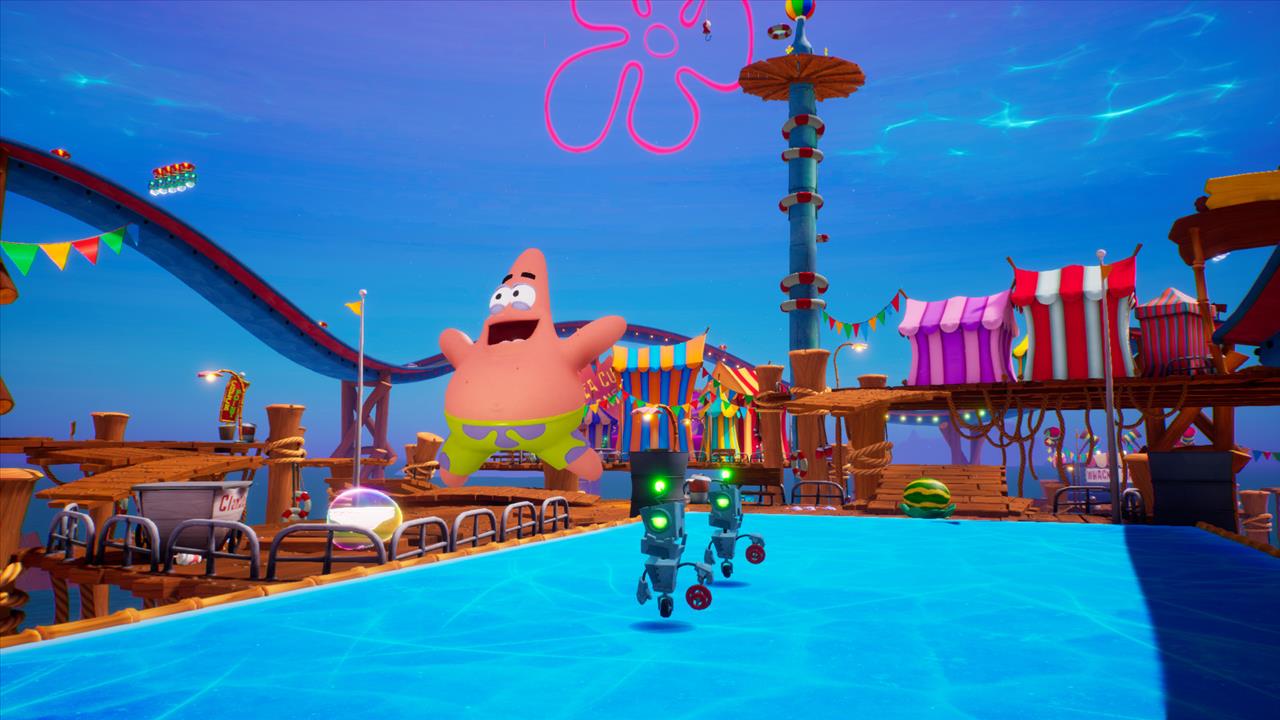 Written by Eric Hauter on 7/3/2020 for PS4
More On: SpongeBob SquarePants: Battle for Bikini Bottom - Rehydrated

My seven-year-old daughter pays absolutely zero attention to my videogame playing ways. Other than rolling her eyes when she wants to use the television when I’m playing one of “my games”, she has no interest in my perpetual gaming. But when I fired up SpongBob SquarePants: The Battle for Bikini Bottom Rehydrated for the first time, she happened to be walking by. And to my surprise, she came over and sat down on the sofa next to me.

“Its an old SpongeBob game we used to play when your brothers were your age. They just remade it, and I’m playing it so I can review it.”

She watched silently for a while, watching me progress through the tutorial that takes place in SpongeBob’s deceptively large pineapple house. Then – to my utter surprise – she said, “I want to play this game.” 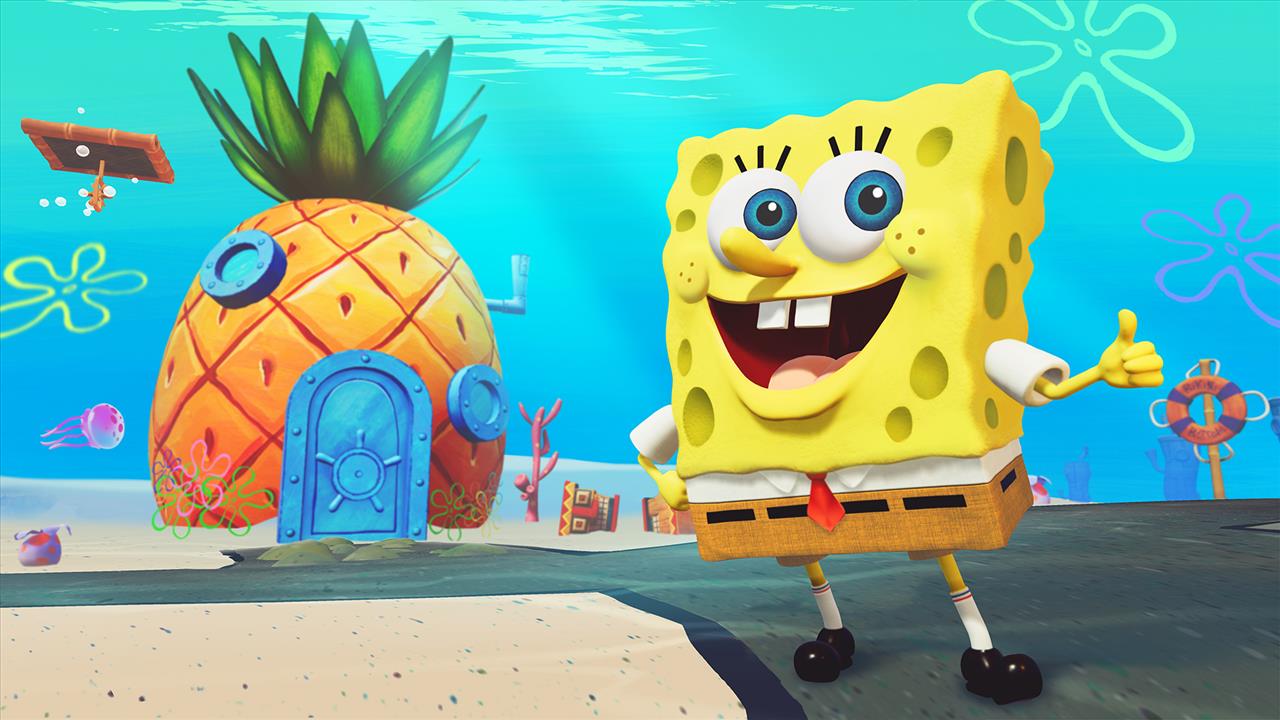 I didn’t quite know what to say. “Well, I have to play through it for my review, but you can play it when I’m done,” was the best response I could muster. “I can teach you how.”

She sat for a while longer as I explored SpongeBob’s neighborhood and dipped into Squidward’s house, then said “I want to play this game.”

“Maybe you can help me play? Like, you can look out for where I should go, and look for secrets and stuff.”

“No, I want to play myself. I want to hold the thing,” she insisted.

I silently kept playing, waiting for her to lose interest and leave the room. She didn’t.

Again, she said, “I want to play this game.” And then again. And again.

And that’s how I ended up creating “Classic Gaming Corner” in the playroom on our second floor. I dragged the old 36” Sony Trinitron tube TV over there and put it back on its stand (so, so heavy). I pulled out the GameCube and all the old games, and hooked it up. I hooked up the PS2 and the SNES too, and threw a VHS/DVD combo on there for good measure. And now my littler kids hang out up there all day, playing GameCube games and watching old Justice League Unlimited DVDs. It’s kind of awesome. 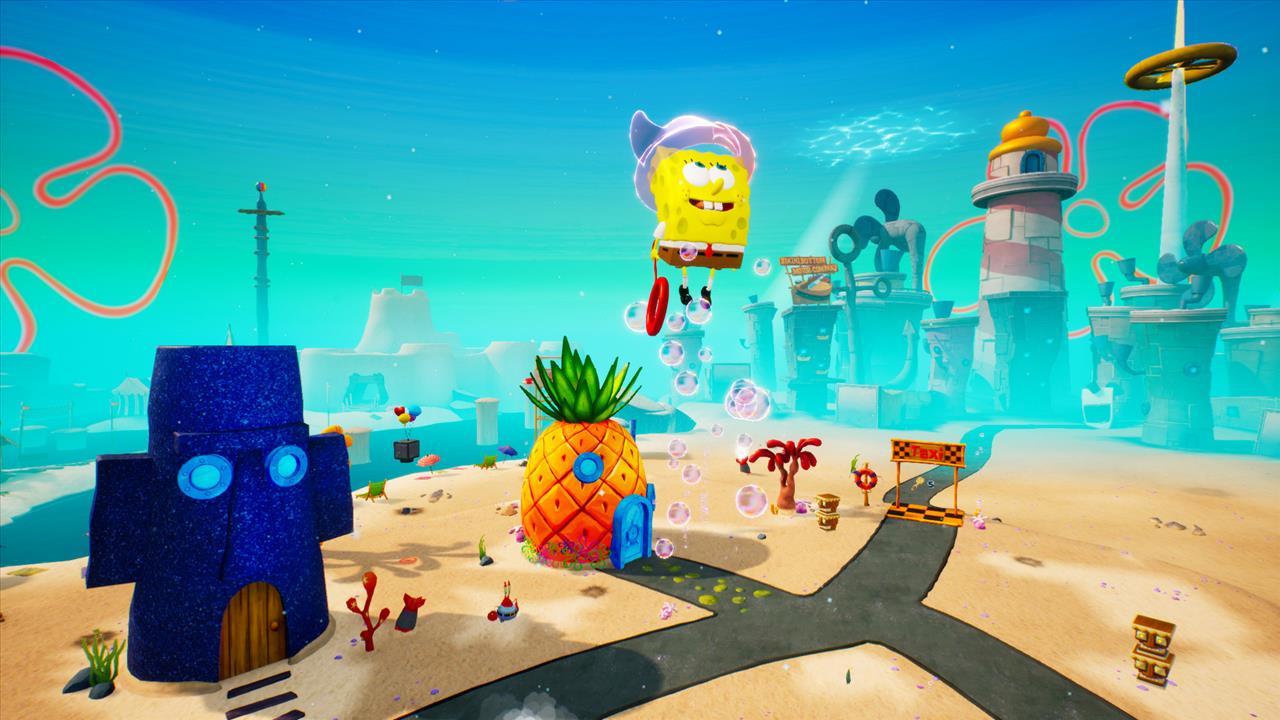 What’s the point? Well, the point is that my daughter immediately started playing the original GameCube version of SpongeBob SquarePants: The Battle for Bikini Bottom, and I’ve sat up there watching her for hours. She has kept up with my playthrough for the most part, with minor assistance from her older brother on boss fights. It’s been pretty darn impressive.

It has also given me a chance to study both versions of this beloved and strangely venerated game in great detail. When you are actually watching the two versions of the game play out concurrently, you really get a good sense of the work THQ Nordic put into this extremely out-of-the-blue effort. The “Rehydrated” version is drop-dead gorgeous at times, with a solid framerate, bright sharp images, and smooth feeling controls. I don’t know if anyone was asking for a remake of this game, but it is clear that regardless of the demand or lack thereof, THQ Nordic went all in on making this a great experience, at least visually. 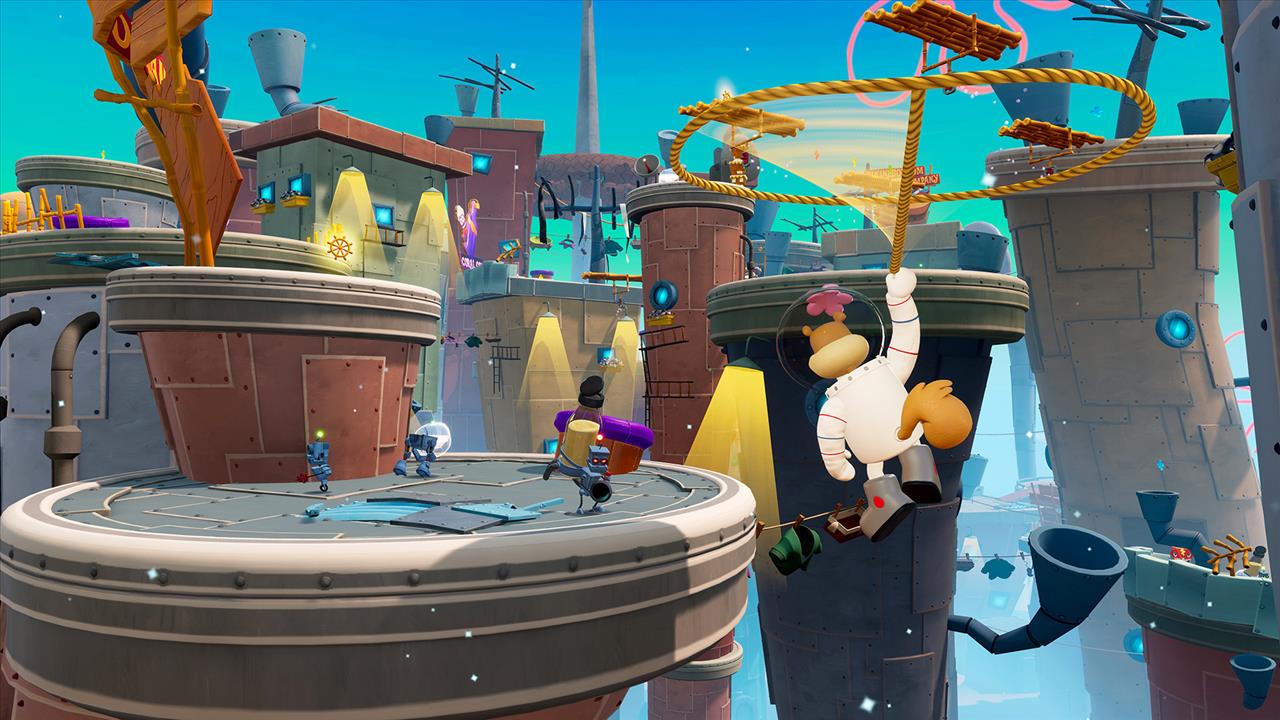 The original was pretty good looking for its time, but it did have some strange bugs (why is the waterfall in Goo Lagoon so flippin’ loud?). Bikini Bottom was made back before developers could patch things out, and the GameCube version certainly has some rough patches.

Interestingly, the modern remake that I’ve been playing on the PS4 has the some of the same trouble areas. Yes, the waterfall sound effect has been brought under control, but certain gameplay elements that were troublesome in the original are still as frustrating as they ever were. The bungee jumping segments, for example, are wildly uncontrollable in both versions. I can understand the desire to be faithful to the original game, but with all the effort involved in making the game beautiful, I do wonder why THQ Nordic didn’t clean some of this gameplay stuff up.

My family played SpongeBob SquarePants: The Battle for Bikini Bottom purely by accident back in the day. This was not a game we went seeking out, beyond the fact that one of my sons was a SpongeBob fanatic (I was surprised when setting up Classic Gaming Corner to discover that we own no fewer than four SpongeBob games on GameCube). But when we dug into Bikini Bottom way back then, I was surprised at just how good this game was. It’s a very solid example of platforming from the early 00’s, and in many ways stands the test of time, quirks aside.

For those not familiar, The Battle for Bikini Bottom has a very simple plot. Plankton, the evil-doer in Bikini Bottom, has set loose an army of evil robots. SpongeBob and his buddies mistakenly feel like they are responsible, and go about trying to stop the robot invasion. This involves a lot of running, jumping, and karate chopping.

Battle for Bikini Bottom plays out very much the way you would expect a twenty-year-old platformer to play. There are three playable characters, SpongeBob, Patrick, and Sandy the Squirrel (who is clearly the best). Each of them has slightly different power sets which are used for solving progression related puzzles. SpongBbob can shatter objects above him and below him (and perform the wretched bungee jumping). Sandy can swing from dangling points in the sky, and Patrick can…uhh…throw stuff. The game gently prompts you to change characters when appropriate, even going so far as to select the correct character for you rather than letting you decide. 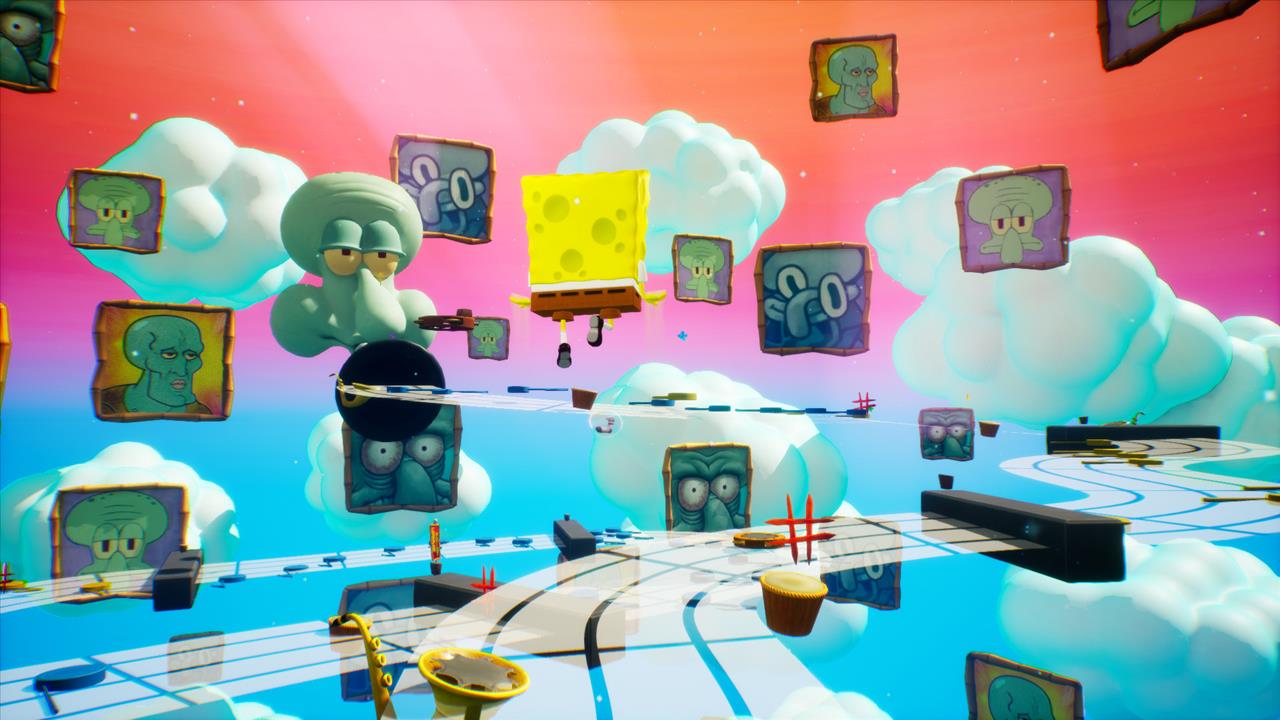 You run around the various zones of Bikini Bottom, collecting the various collectibles you need to proceed and generally having a simple good time, until the game decides to bust you in the face with a wickedly difficult segment. No one said that these old games – even the ones for kids – were easy. Even the very first boss fight against the enormous King Jellyfish rocked me back on my heels a little bit. The timing required to beat this thing is well beyond what the game demands of you leading up to that point.

So yes, this is the same game that you played 20 years ago, all prettied up for a new generation – who are obviously interested. The same endlessly repeated lines, the same not-really-Mr.-Krabs voice work, the same spikes in difficulty, the same wretched bungee jumping failures. But also, the same fun downhill slides, the same hilarious cutscenes, the same delightful charm, the same awesome level design.

And let’s be real here, I’m not reviewing the original game, I’m reviewing the remake. And this is one damn fine remake. Loyal to a fault to the source material, of course, but isn’t that the point? Having spent extensive time with both versions in the last week, I can tell you that playing these two games feels exactly the same. We can’t exactly laud the Crash Bandicoot remake for feeling correct and fault SpongeBob for doing the same.

This game is almost exactly the same as the original, for better or for worse. Someone somewhere wanted it, and whoever that was got precisely what they wanted. And the rest of us got a pleasantly unexpected throwback. Not bad, if you ask me.

Who knew that playing SpongeBob SquarePants: The Battle for Bikini Bottom Rehydrated would deliver such a solid dose of nostalgia? But deliver it does. Having played both versions of the game in the past week, I can attest that this is a rock-solid remake of fun but somewhat flawed game. You take the bad with the good on this one, but for the most part Bikini Bottom holds up surprisingly well.