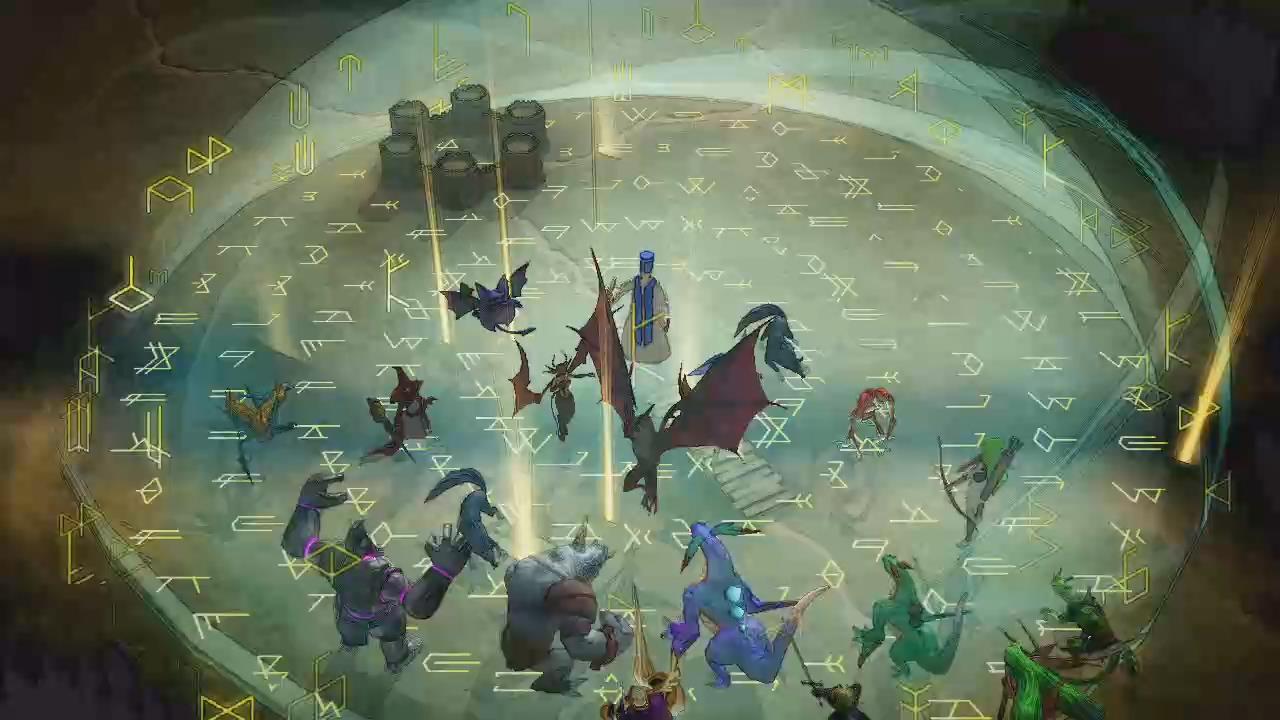 Brigandine: The Legend of Runersia Review

Written by Eric Hauter on 6/25/2020 for SWI
More On: Brigandine: The Legend of Runersia

Brigandine – The Legend of Runersia might look a little intimidating at first glance. Taking a gander at the trailer, I wasn’t quite sure if I was up for reviewing this one. It looked like it might be a little too complicated for me. The sight of menus within menus had me cringing away from my Switch. I’m trying to keep things light and fun, and Brigandine seemed heavy and chore-like.

Thank goodness I decided to download the demo onto my Switch one afternoon on a whim. It turns out that Brigandine has a marvelous tutorial, which walks you through every single one of those menus in a way that teaches the game without overwhelming the player. While no one could say that Brigandine is a simple game, it turns out that the level of complexity at work here is about on par with a good modern board game. And similar to physical games, once you grasp the rule set, the ability to plan strategies unfolds like a flower.

Based on a little-known – but beloved by those that did play it – PlayStation One game, this sequel arrives on Nintendo Switch 22 years after the original title. Indeed, Brigandine might feel at home on an older system. While not an ugly game, nothing in Brigandine screams “next gen.” But the graphics are not the point. This is a strategy title, and the visuals are simply a means to a deep and tactical end.

Brigandine puts players in charge of one of six playable nations in Runersia – each with their own leaders, storyline, and motivations. I’ve played through two of these nations’ stories, and while some might find the static cutscenes that impart the tale to be window dressing, the writing is actually quite entertaining. The characters are well-drawn (though some of the actual art might be a little ill-considered), and the sense of time and place help the player become invested in the actions taking place on the game board.

The object of Runersia is to take over the entire continent – all six nations – by slowly conquering the bases of your enemies. It is best to think of Runersia as similar to games like Civilization, but with some RPG elements. Sure, your characters level up, but the real aim here is continent-spanning conquest. This is not a game with one primary storyline. Rather, the aim here is to provide lots of interesting scenarios for multiple playthroughs.

Each nation begins the game with perhaps eight bases, each of which is staffed with a military leader and a few monsters. It is up to you to marshal your forces and deploy your armies to the right place at the right time.

Bases are sprawled across the continent willy-nilly, with lines of travel between them. You can only attack or be attacked by a base that is adjacent to one that you already control, so careful planning and organization is key. Once you have control of an enemy base, you have to staff it, leaving you constantly shuffling your armies around the map. 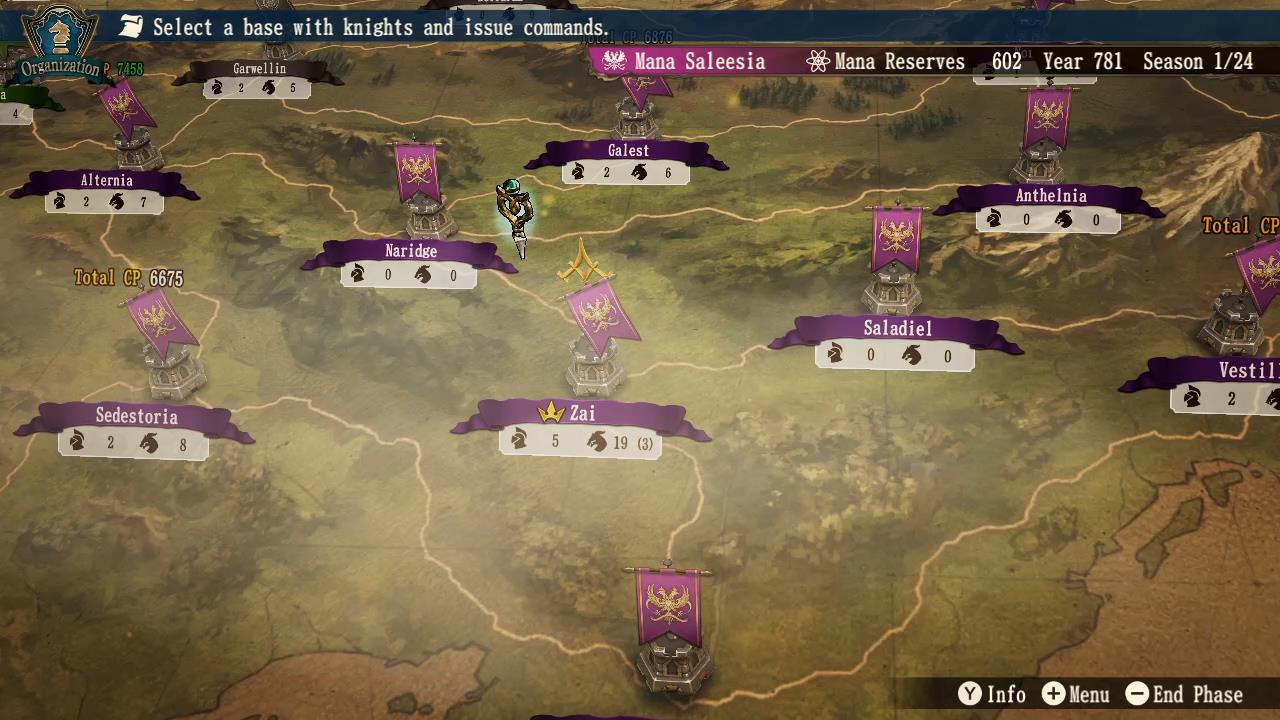 Each base can hold as many armies as you like, but only the strongest three are eligible for battle. Armies consist of one leader and as many monsters as you can squeeze onto their team. The monster types you can summon vary from base to base. Your commanders all have very different ability sets, which necessitates you shuffling armies around to get a desirable variety.

Monsters can be summoned for a price, but they always show up at level one. As such, it is important to protect your long-term survivors. Losing a high-powered monster is much like losing a beloved soldier in an XCOM game. You feel the loss, exquisitely. Certain monster types begin Brigandine as weaklings, but over time they become powerhouses. I was particularly fond of these little green Yoda-looking dudes that inflict damage-over-time poison attacks, but keeping them alive was next to impossible. When I did get one leveled up, I defended him bitterly.

The flow of Brigandine is unique, particularly for a console game. There are two phases to each turn: Preparation and Attack. These modes are played in succession, and you can take as long as you want in Preparation mode before moving onto the more gameplay-heavy Attack mode. 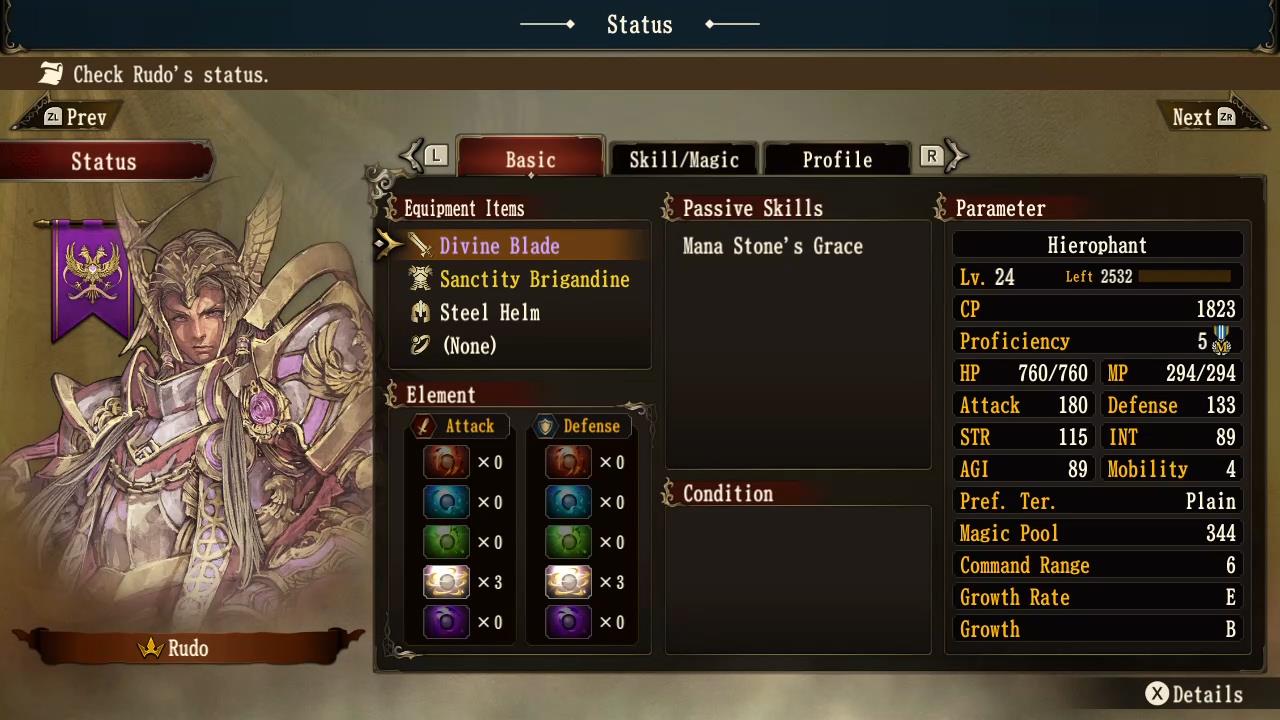 Preparation mode is where all of those gnarly-seeming menus live, but once you get the hang of it, you can accomplish what you want in just a few clicks. Here is where you spawn your monsters and assign them to generals, upgrade your troops after successful battles, and move your players around the map to bolster some bases that might be lacking. Preparation mode is a fiddly player’s dream, as you can dig deep into your characters and armies, optimizing them with monsters that heal, attack, do ranged damage, or all three. This mode is all numbers and icons and menus, and it is very enjoyable to tinker around with.

You are also able to send lower-powered leaders out on quests in Preparation mode, which are automated trips away from the castle to earn experience or loot. You must be very careful in doing so, however, as questing armies are not available for battle, and you could be leaving your beloved bases woefully understaffed when Attack mode rolls around. 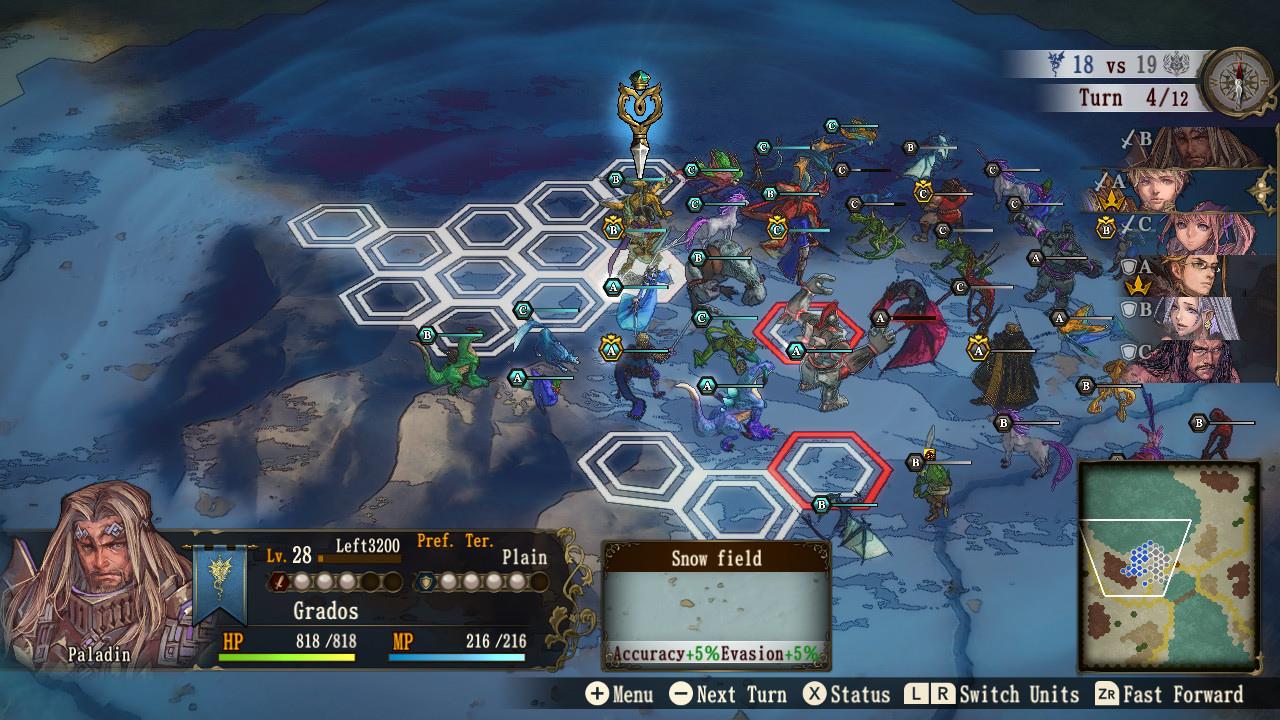 Attack mode is the meat of Brigandine. Entering Attack mode reveals the moves that each nation made in Preparation mode, allowing players to see if their maneuvering paid off. Suddenly, bases that stood empty are flooded with armies, and others that were previously full are left undefended. If you haven’t shuffled your dudes around correctly, you might find yourself scrambling to come up with a good offense that will protect your assets.

With all of this information in hand, you can coordinate your attacks to start taking over nearby bases. In my playthroughs, I typically focused on one opposing nation at a time. I found that attacking everyone aggressively left me overextended, without enough armies and monsters to cover every front. A more deliberate plan of attack is definitely recommended.

Upon entering battle, the game shifts to a hex-based battle screen. While it is possible to let your units auto-battle, to me it seemed that this was a good way to let your beloved monsters get slaughtered. I much preferred taking a standard turn-based tactical combat approach, carefully planning each move one unit at a time. 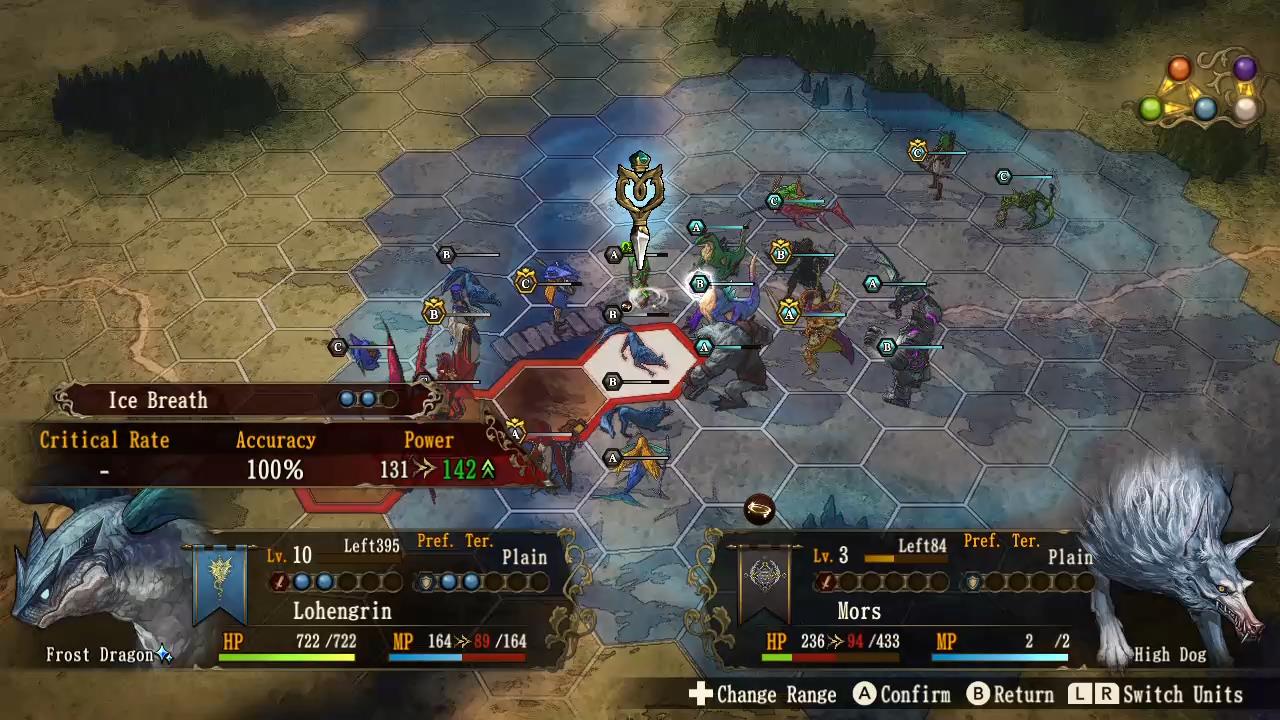 Each unit type has a unique power set, which only becomes more diverse and powerful as the game continues and monsters level up. Decisive victories can be won by focusing attacks on opposing leaders, but that is easier said than done. However, if you can manage to take out one enemy leader, the others sometimes retreat, which can be fairly satisfying. Even more satisfying is when they attempt to retreat and cannot, which can lead to a sound shellacking, followed by the player poaching their enemies’ monsters. Not to sound overly psychotic, but there are few things more satisfying than beating the tar out of someone and then taking their stuff. In a strategy game, of course.

With its multiple modes and deep tactical options, Brigandine is a smorgasbord of strategy goodness. The presence of a superb tutorial takes away a lot of the burn involved in learning the game, easing players into its complexities. While the Preparation mode plays like an involving and fun board game, the battle mode is turn-based strategy to its core. Brigandine is unique to be sure, but it feels great on the Switch. I’m heading on vacation soon, and Brigandine is going to be my vacation game. With great replayability, this one is going to keep strategy fans satisfied for a long time to come.

With two distinct but well-integrated strategy modes, Brigandine offers a huge amount of gameplay that feels both old school and fresh at the same time. A fantastic tutorial eases new players into the game with little friction, and the seeming complexity becomes quickly manageable. While the graphics are nothing to write home about, the care taken in each story thread is evident, and the tactical gameplay offers a ton of replay value. Brigandine is an utterly unique offering on Switch, and should appeal to RPG fans and strategy buffs alike.