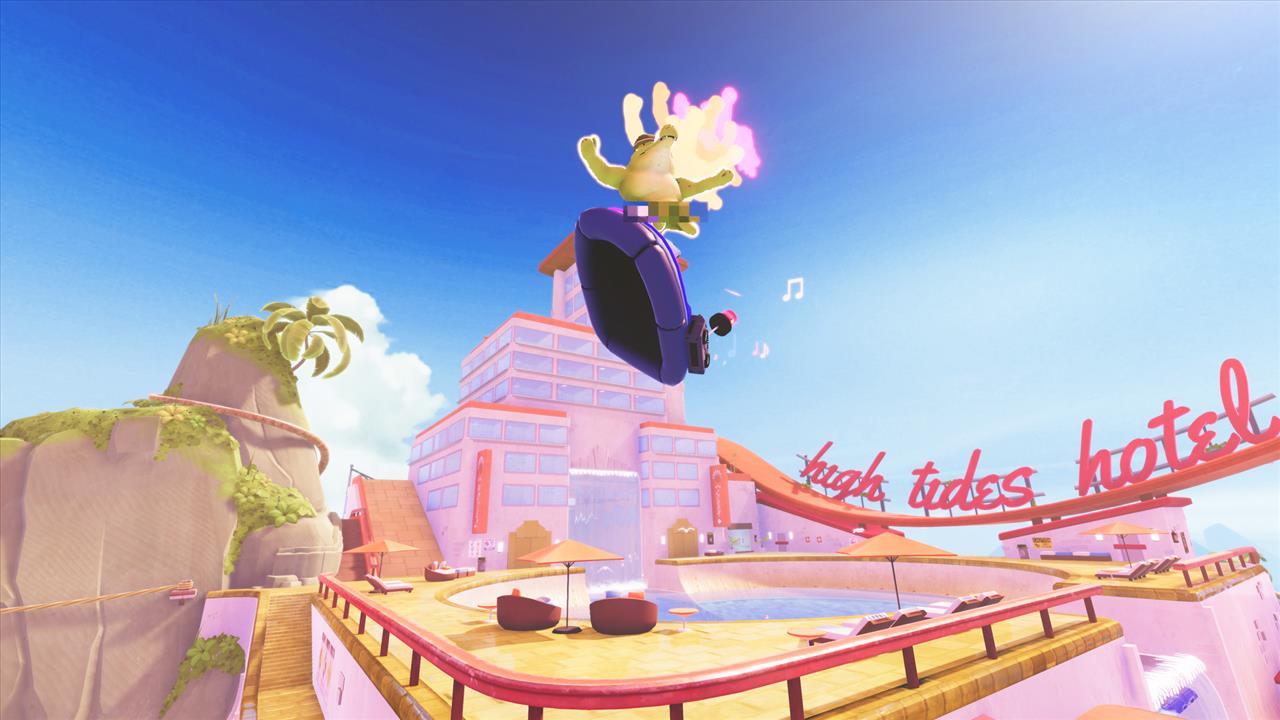 My time with Funktronic Labs’ new “skate-boat-ing” game Wave Break has been an emotional roller-coaster ride. With some soaring highs and some subterranean lows, I have bounced all over the radar on this game, swinging wildly from one end of the spectrum to the other, sometimes within minutes.

At one point, I told my wife that I was horrified that I would have to give the game such a low score, as I “really wanted to like it.” Two days later, my son and I agreed that the game deserved at least a 9.0. I have since settled down a little bit and have tried to organize my thoughts, but I have to say, Wave Break is a humdinger, and it has been ridiculously difficult to try to come to grips with it. 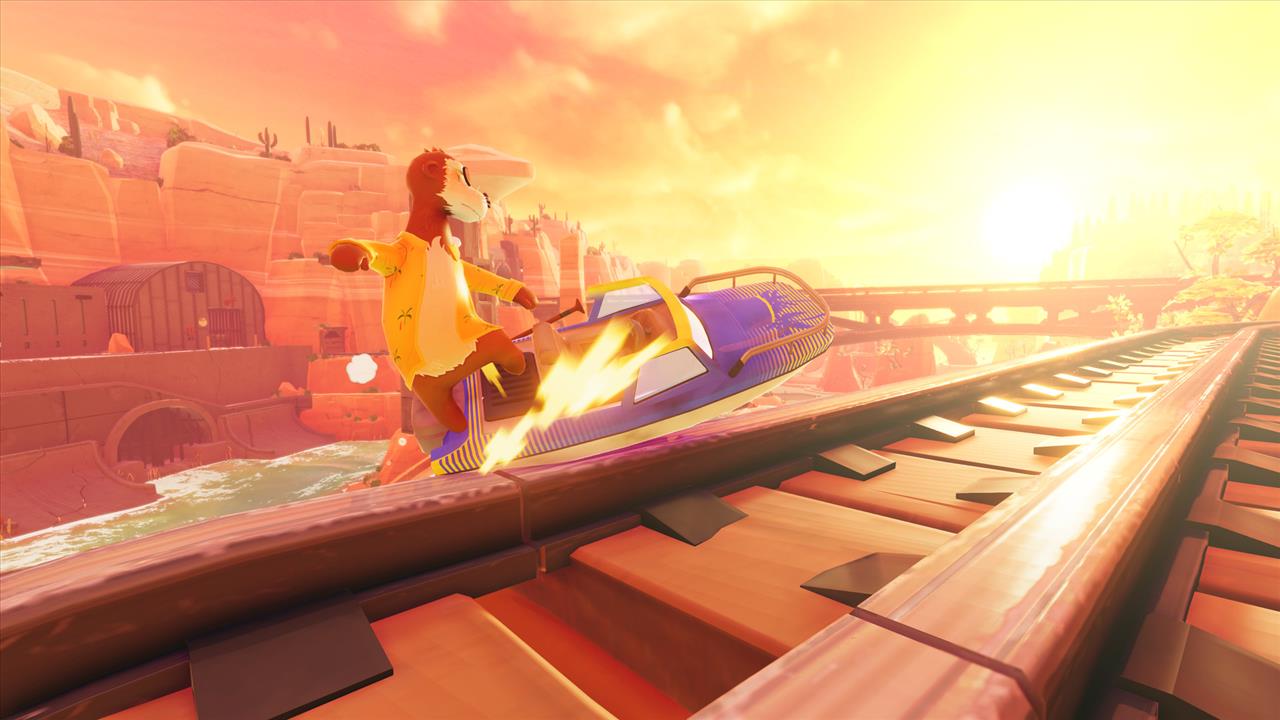 I can hear what you are thinking. “Dude. This is a game about cute animals doing skateboarding tricks on boats. What is wrong with you?” To which I reply, “You try it then, and see how well you do.”

Over the course of a week, I went from “Oh, this is cute” to “Why is this so difficult?” to “I hate this game and never want to play it again” to “This is maybe the best game I’ve played this year.” On Saturday night, my eyes popped open at 3 AM, one of Wave Break’s earworm '80s pop tunes wriggling through my head. I couldn’t get back to sleep until I got out of bed and took a run at the final mission of the second level. I popped out of bed, achieved it on the second try, went back to bed, and slept like a baby. Freakin’ Wave Break, man.

In many ways, Wave Break is the sunshine-y Dark Souls of skate-boating games. It requires an unbelievable amount of patience to pierce through a shroud of difficulty and overcome its titanic learning curve. It is a game utterly uninterested in telling you how to play it. Wave Break expects you to meet it on its own terms, and if you choose instead to bounce off of it, there will be a lineup of anthropomorphic animals shrugging.

Wave Break is a wild hybrid of genres and styles. Set in a cartoonish Miami Vice-inspired version of the 1980’s, the game places anthropomorphic animals in the center of a ski-boat and cocaine-fueled version of paradise, then has them perform skateboarding tricks while taking potshots at each other with a variety of firearms. The animals are cute, but they curse like sailor. Put the profanity filter on if the kids are in the room – these adorable critters are known to drop random f-bombs when they wipe out. 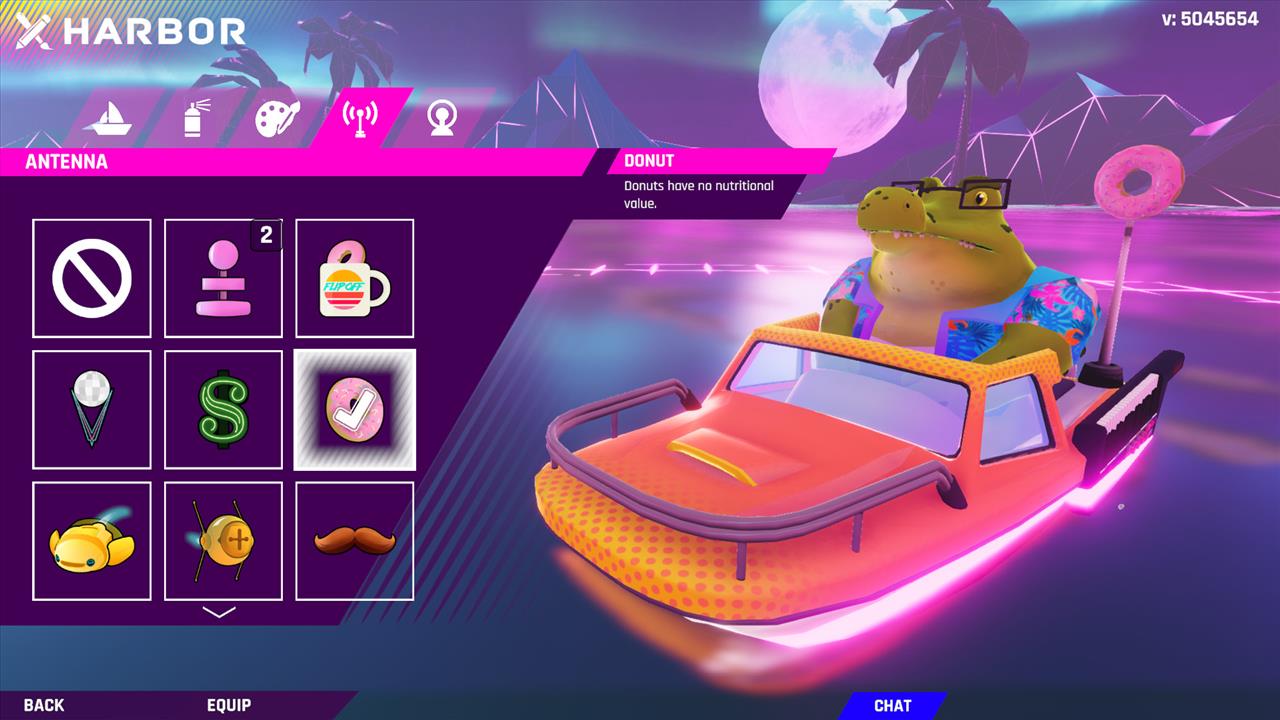 Players are presented with a campaign, which includes four skateable levels, each of which has about 15 goals to accomplish – similar to the structure of classic Tony Hawk games. A few other modes are available: a multiplayer Deathmatch mode, with players stalking around shooting each other; and a Time Attack mode, with players competing for the most points (and shooting each other). There is also a Free Play mode, where players can just cruise the map, practicing moves and looking for secrets (and shooting each other). All of these can be played in local split screen, which is an amazingly welcome feature.

Right out of the gate, the correlations between Wave Break’s campaign mode and the Tony Hawk franchise are apparent. Goals like “Collect all the cash,” “Grab the secret tape,” and “Grind around the pool” are all accounted for. Some of the controls are even the same – tapping “Y” to start a grind, for example. You cannot, however, rely on your Tony Hawk muscle memory to get you through Wave Break’s challenges – there are enough differences that you will find yourself glitching out for a while if you try. 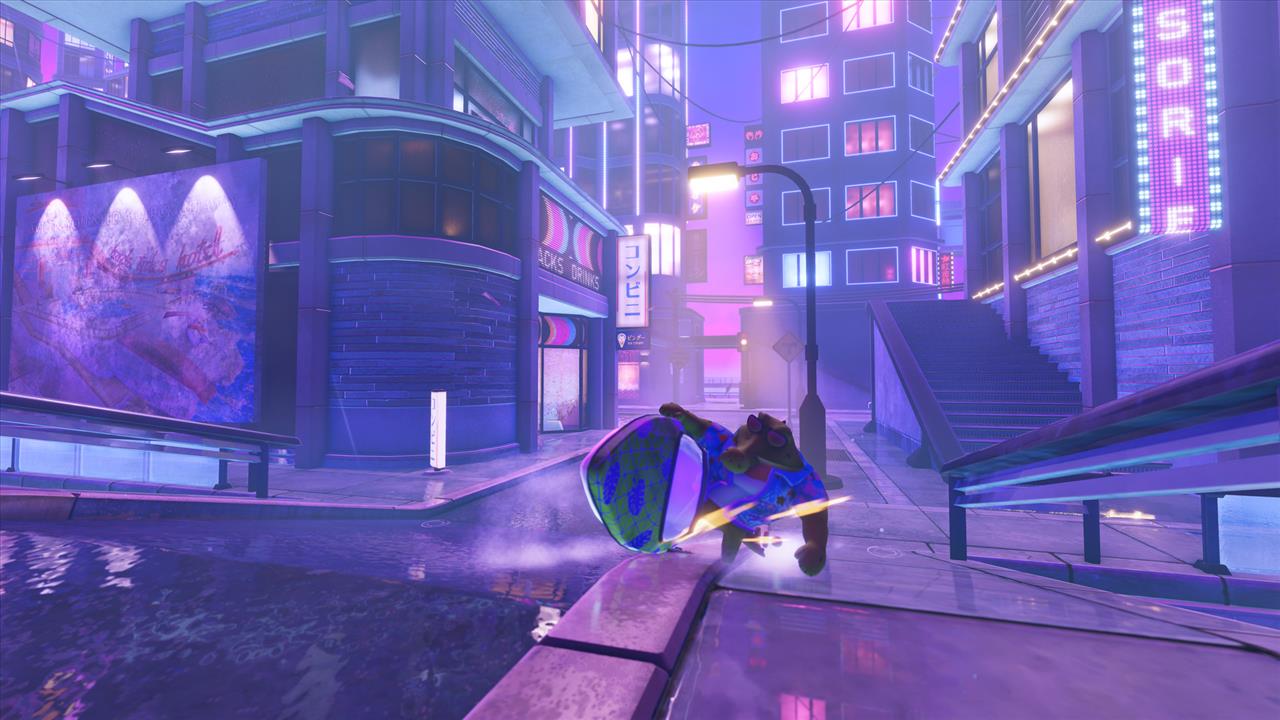 But it is the learning curve that most reminds me of Tony Hawk. Veterans of that series likely have some happy, but fuzzy, memories of swooping around the airport or cruise ship, grinding merrily away and racking up amazingly high combo scores. But think back before that time, to the first moment you picked up a controller and tried to navigate one of those skateboarders across a simple parking lot. Do you remember how many times you fell face first onto the cement, crashing down with a bone-crunching splat? Do you remember how long it took you achieve any sort of proficiency in those games? I don’t know about you, but for me it took a long, long time.

Wave Break is much the same, but with an even steeper curve, if that’s possible. There is absolutely no way to gain enough proficiency to succeed in the campaign if the campaign is all you play. Wave Break doesn’t bother to tell you that you can increase your characters’ skill stats. Nor does it explain how to earn enough money to do so. Throwing yourself at the campaign is a fool’s errand, much like running face first into a brick wall. 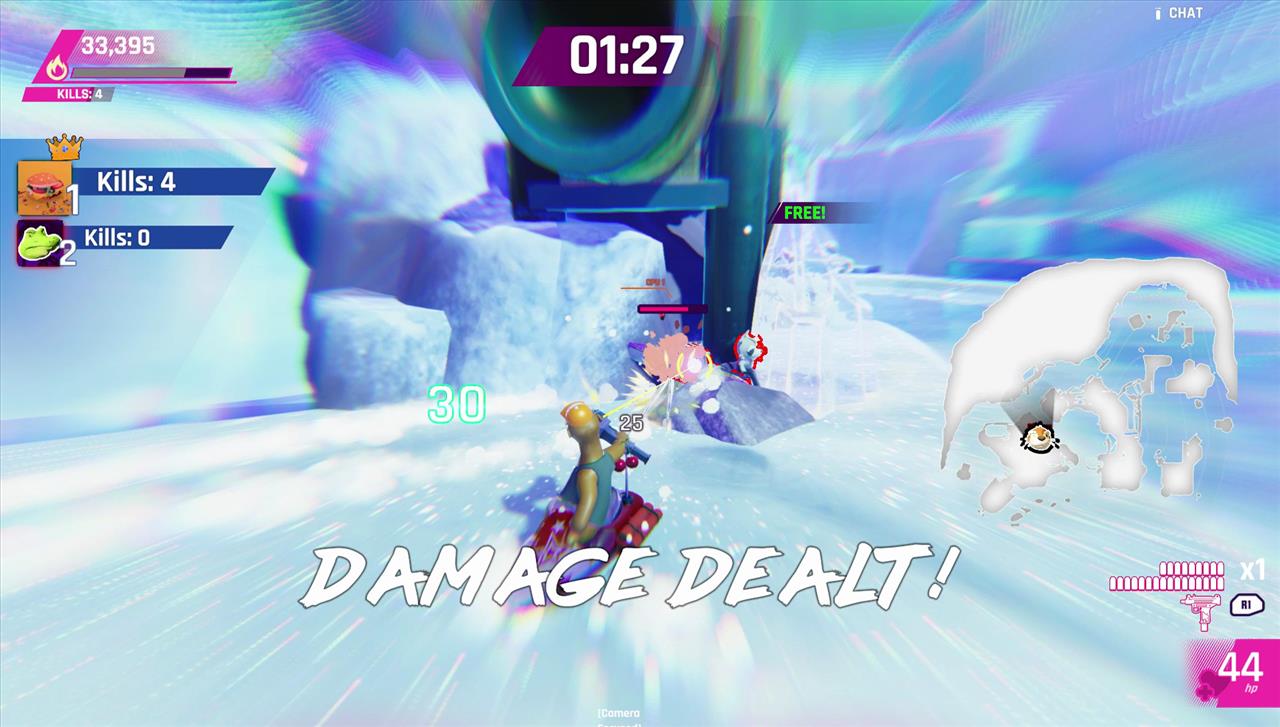 It was this disconnect that had me bitterly hating Wave Break for several days. Endlessly re-upping for another two-minute campaign run, only to come away empty handed. The few times I was able to succeed at some of the easier goals, the rewards were so paltry that I couldn’t see the end of the tunnel. I seriously considered just throwing in the towel and not reviewing the game. I was nearly defeated outright by Wave Break.

It was only after I decided to check out some of the other game modes that I realized that I had been a fool. There are plenty of other ways to earn money to apply towards your character in Wave Break, and soon I was pulling in so much cash that I was able to increase every stat in the game to at least the halfway point. Things in Wave Break became suddenly manageable. Then I started finding Wave Break enjoyable. And now I find myself hopelessly addicted to Wave Break, barely wanting to take enough of a break to type up this review. Before, I could barely manage a straight grind across a pier. Now I can string together outlandish series of moves, landing back in the water with a kick-flipping flourish. 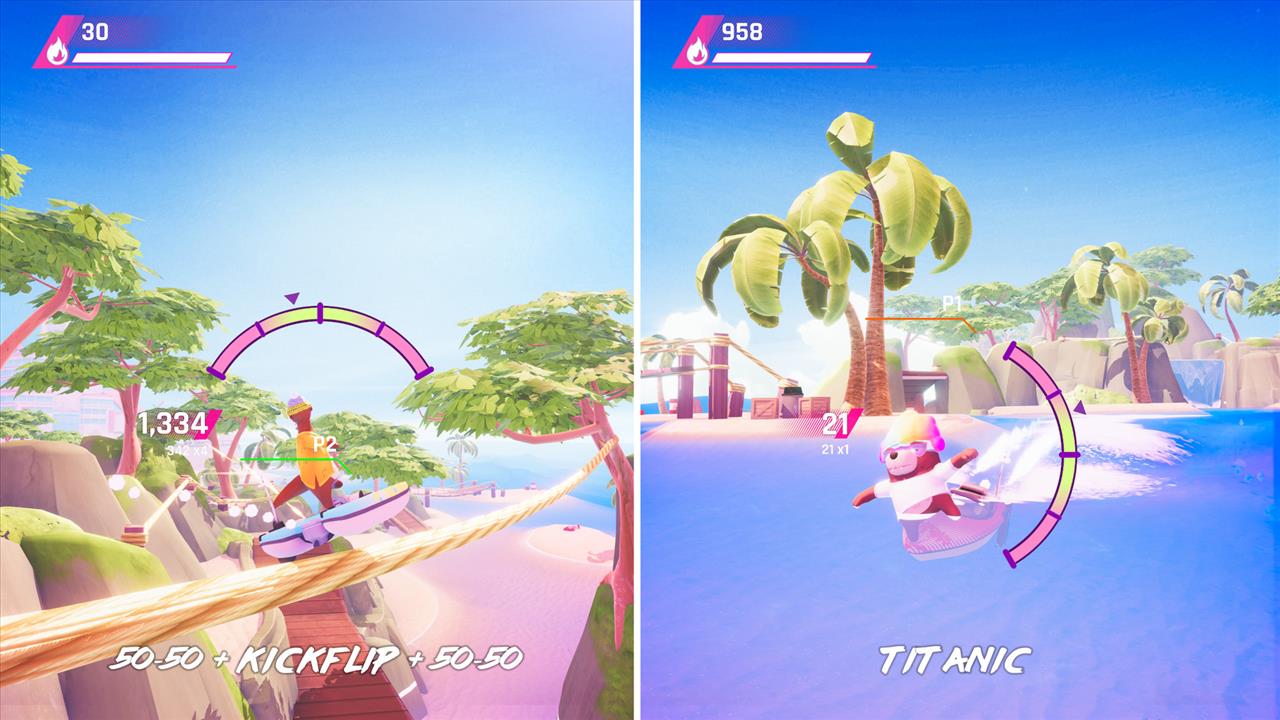 Once you get your head on straight (and sink a huge pile of cash into your grinding stat), Wave Break can be a complete joy, a steady pump of dopamine to the brain. I spent a good chuck of Father’s Day on one single rail, grinding back and forth endlessly, trying to learn different moves and master dismounting without crashing. I went from thinking that the controls were some of the worst I’ve experienced in modern video games to realizing that the controls were super tight, and I just sucked at the game. Or maybe the controls in the early game are bad on purpose, and I just finally figured out how to improve them. Doesn’t matter. Everything is fine.

So yeah, I love Wave Break now. It’s not a perfect game. There are still some pretty glaring issues holding it back. The inscrutability of the game is a huge barrier to entry. The camera goes completely bonkers when you try to maneuver through a tunnel or nook. The need for a list of moves is absolutely dire. The dynamic water physics can lead to some frustrating wipe outs that feel a little unfair. But I absolutely love the feeling of going after one of the game's challenges and pounding away at it until I figure out how to conquer it.

It has been a long time since I’ve worked this hard to enjoy a game, but I feel like the rewards in Wave Break are worth the pain. For a game with only four levels, there is a ton of content here for players to enjoy. These levels are dense, and there is a ton of stuff to do, rails to grind, secrets to discover.

Wave Break puts a lot of barriers up to keep players from enjoying it. The disconnect between the visuals and the difficulty will likely be jarring for many players. But sticking with this game yields some great rewards, and the feeling of accomplishment you get is absolutely worth the struggle to succeed.

Not everything in life is handed to you. Sometimes you have to work hard to enjoy games about bears skateboarding on boats in Miami.

Wave Break is a blast of a skateboarding game – once you get through its nearly impenetrable shield of difficulty. With tons of moves to learn and master, and some deep and dense levels to explore, Wave Break offers a variety of gameplay options to keep things fresh. Just remember to explore the game's modes on your own, because Wave Break isn't interested in explaining things to you.