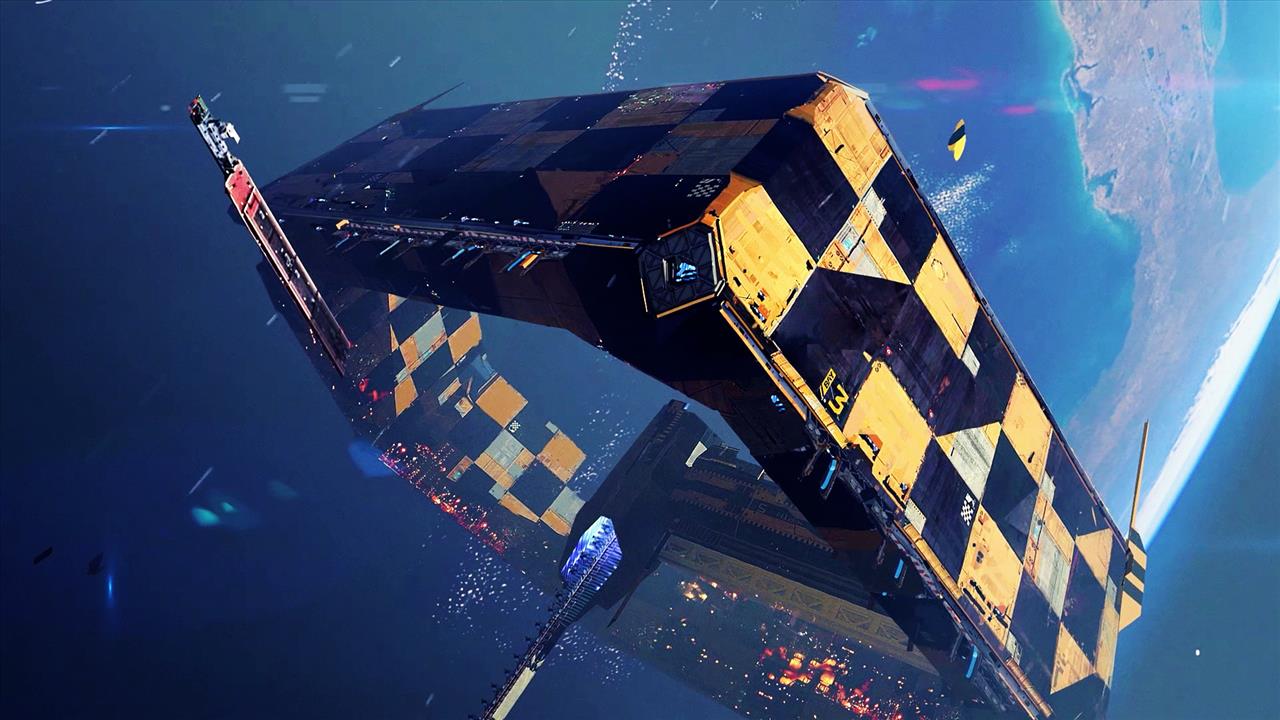 Written by Randy Kalista on 7/13/2020 for PC
More On: Hardspace: Shipbreaker

I feel like I need to kick up my feet and crack open a cold one at the end of a long shift in Hardspace. Being a shipbreaker is lonely, exacting, hard work, but somebody’s gotta do it. That somebody is me, of course, because the company I work for put me a billion dollars in debt the moment I signed on the dotted line. That is no exaggeration: $1 billion in debt. Signed my life away.

There’s nothing to be done about it except wake up every morning and get to work. The Salvage & Reclamation branch of your new corporate overlords has got a long lineup of ships to salvage and reclaim. Better hop to.

So, even before you start the tutorial, you’re taught your first lesson: Ignore the debt. At least at first because the number is insurmountable. Depressing, really. The sooner you ignore that number, the sooner you’ll feel better, sawing these increasingly large ships in halves, and in quarters, and in eighths. Never in such easy-to-shave fractions, of course, though it feels good sending a massive section of a ship’s external hull off to the processor, or a stretch of deck plating into the furnace, or rows of passenger seating down to the barge for repurposing. 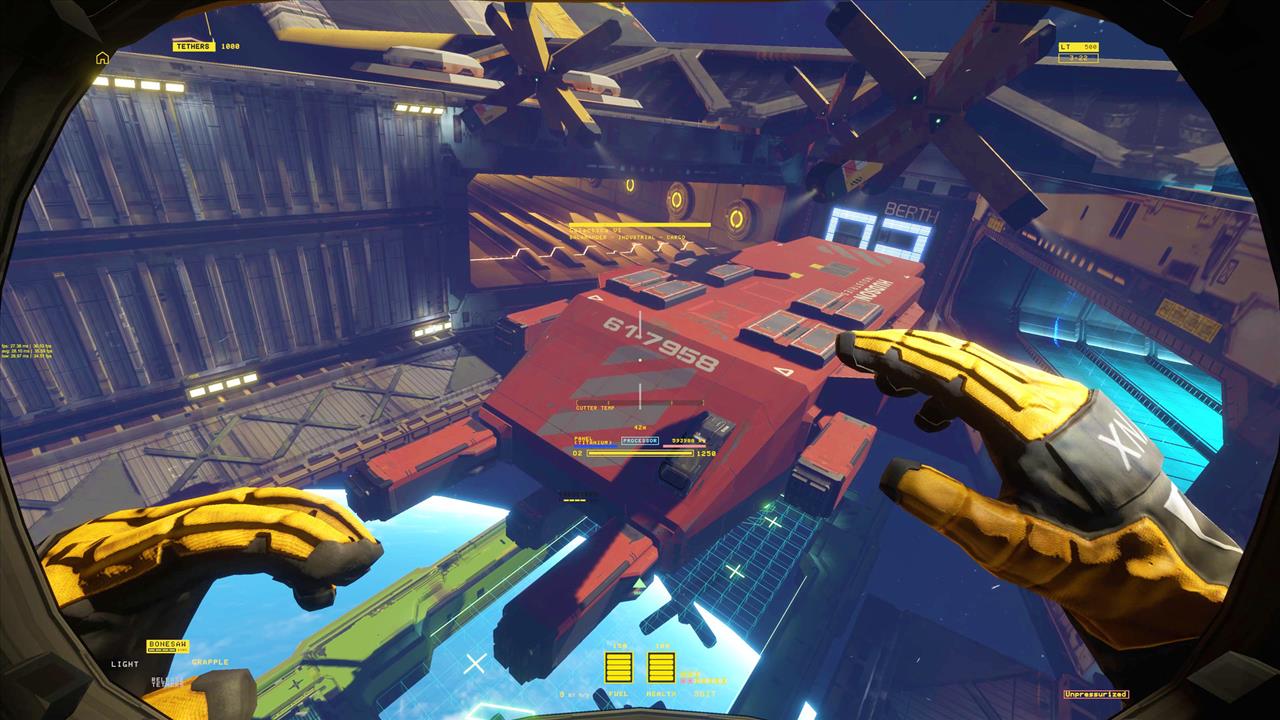 With a “use the whole buffalo” approach, you course through a zero-gravity shipyard, circling around these immense carcasses, finding ways to safely insert yourself into pressurized interiors, or taking calculated risks and blowing out an airlock.

You’re equipped with a laser cutter and a SplitSaw, two types of cutters that let you focus on melting away a single component, or cutting long horizontal and vertical lines right through the metal. Everything upgrades, but you start with just enough oxygen to get you through maybe half of your work shift. Eventually you’ll graduate to using tethers and not just your grapple to lasso chunks of ship around the yard. And there’s your scanner which doesn’t seem immediately useful, but will help you identify each ship’s anatomy a little more precisely. 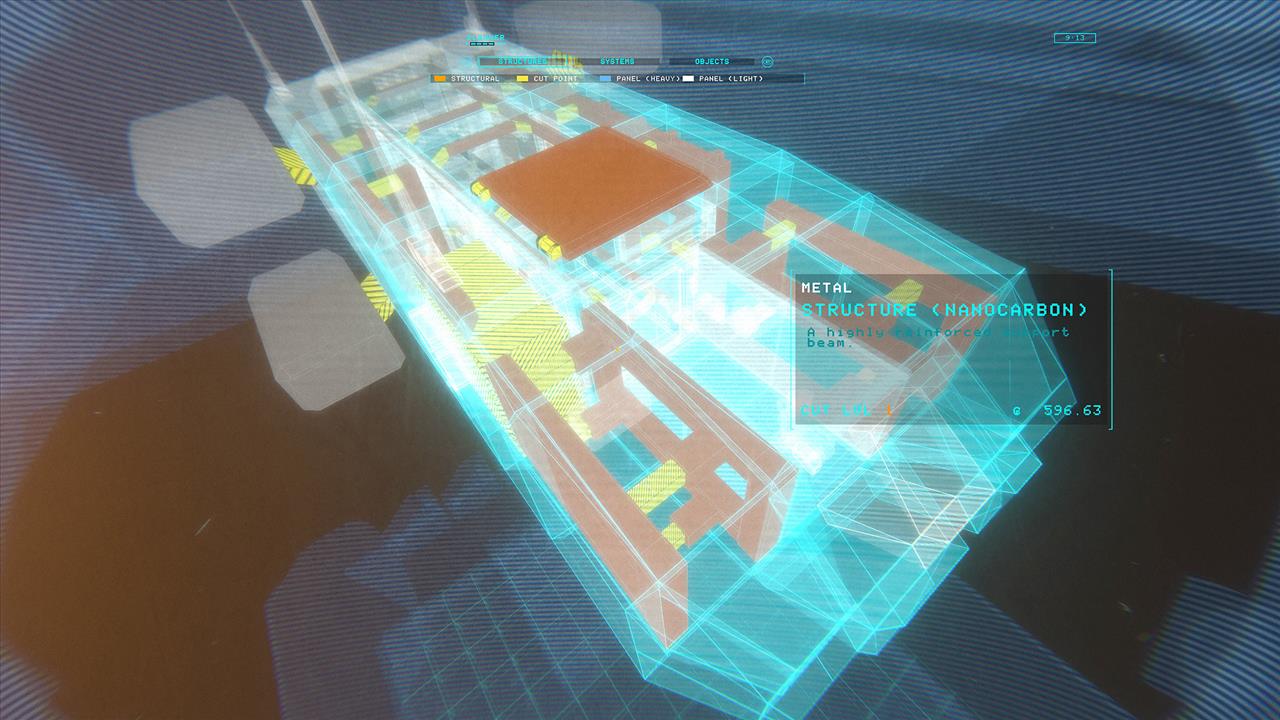 Shipbreaking is a puzzle game. It might not look like it, but that’s your objective. You’re some kind of free-form crane operator, yoinking pieces and parts apart in a game of sheet-metal Operation. I made every mistake I could make. Popping pieces off pressurized areas, exploding like a gunshot out into the vacuum, watching my hands cramp up as I’m electrocuted from a careless swing of a computer panel, or flying too fast into the side of a ship and cracking my helmet.

Even when I wasn’t having a nuclear reactor threaten to vaporize me and the entire aft of a ship, I screwed up dozens of more mundane objectives. I’d missed the minuscule HUD indicator telling me whether to toss one piece of salvage into the furnace or into the processor. I’d tether a piece of the frame to go into processing only to watch it whip out of control and bonk its way into the furnace instead. “Don’t do that,” a Siri-like robo voice pipes up in my helmet. 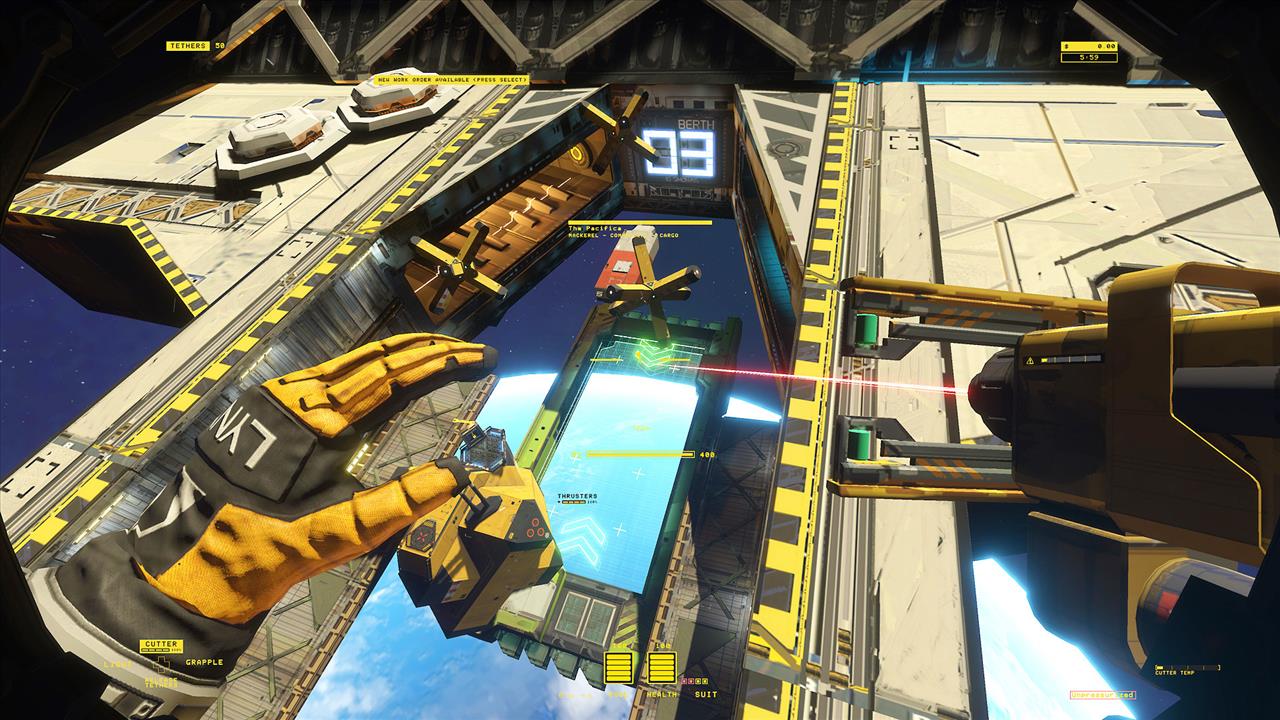 The other faceless voice in your helmet is Weaver. He’s a good ol’ boy and operates as a mentor, or at least as a benevolent supervisor in the midst of your ship breaking corporation’s cold, sterile interactions. Weaver, who sounds like a country music-loving radio buddy, is always there with a friendly reminder: I need you to get on over to the jack and refill your oxygen; you’ve got about five minutes left in this shift, cutter; we’re down to the wire, so let’s tie a bow on this one.

Weaver is one of the good guys. At least he certainly appears to be. It’s going to be a heckuva twist if you play hundreds of hours of Hardspace, paying down your monstrous debt, only to find out the worst about Weaver. He’s saved me more than once from dying of asphyxiation and, interestingly, being charged by my employer to activate one of my clones. Everything comes out of your paycheck, cutter. 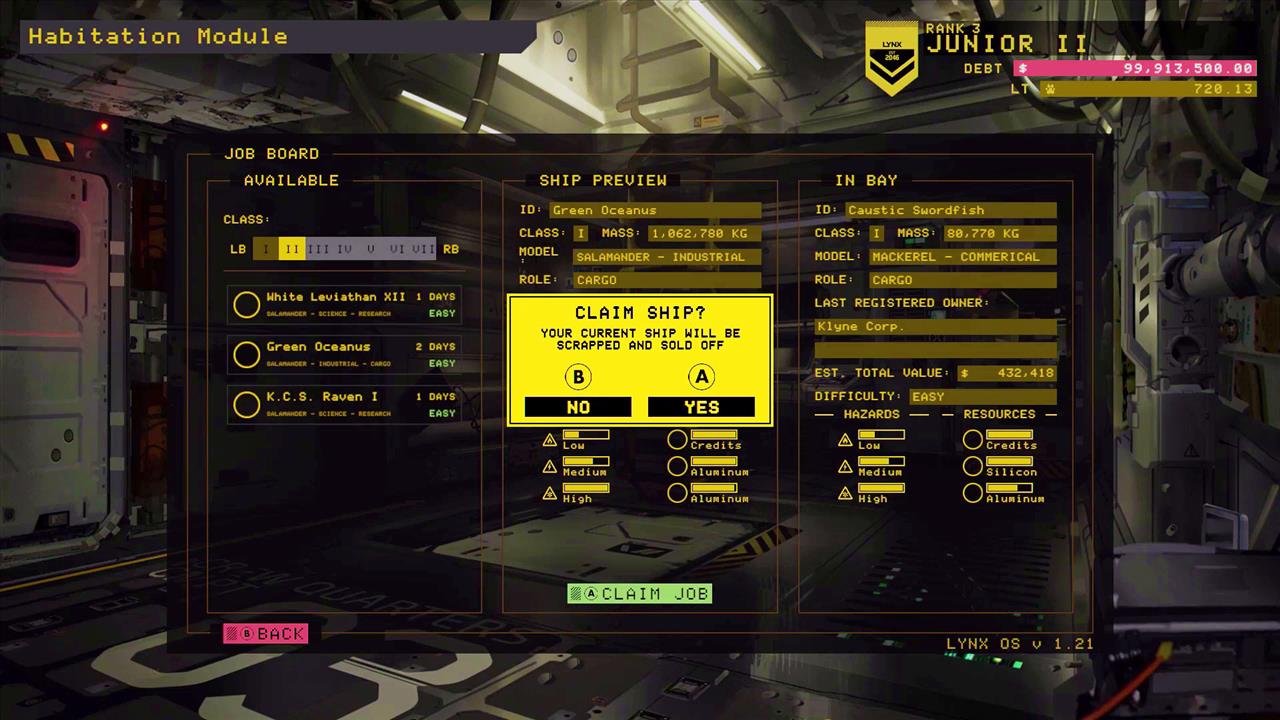 These ships pulling into the berthing grow steadily larger, requiring more days to disassemble, better equipment to tackle, and sharper piloting skills to maneuver around. Like a roughneck Shadow of the Colossus, you climb all over these beasts and break them down, piece by piece, disassembling their puzzle pieces until they’re unrecognizable hunks of metal tumbling about the shipyard.

No, the game doesn’t seem to screenshot very well. It’s not an ugly game. But its aesthetic is (intentionally) dry and (intentionally) industrial. It’s not terribly interesting to look at. And the scenery doesn’t change a whole lot. There’s a distant, white sun one direction, you’re belted in by the moon-sized shipyard, and you’ve got a magnificent Earth below, looking a little worse for wear, perhaps, since the oceans have risen high enough to redraw North America’s coastlines—where did Florida go? 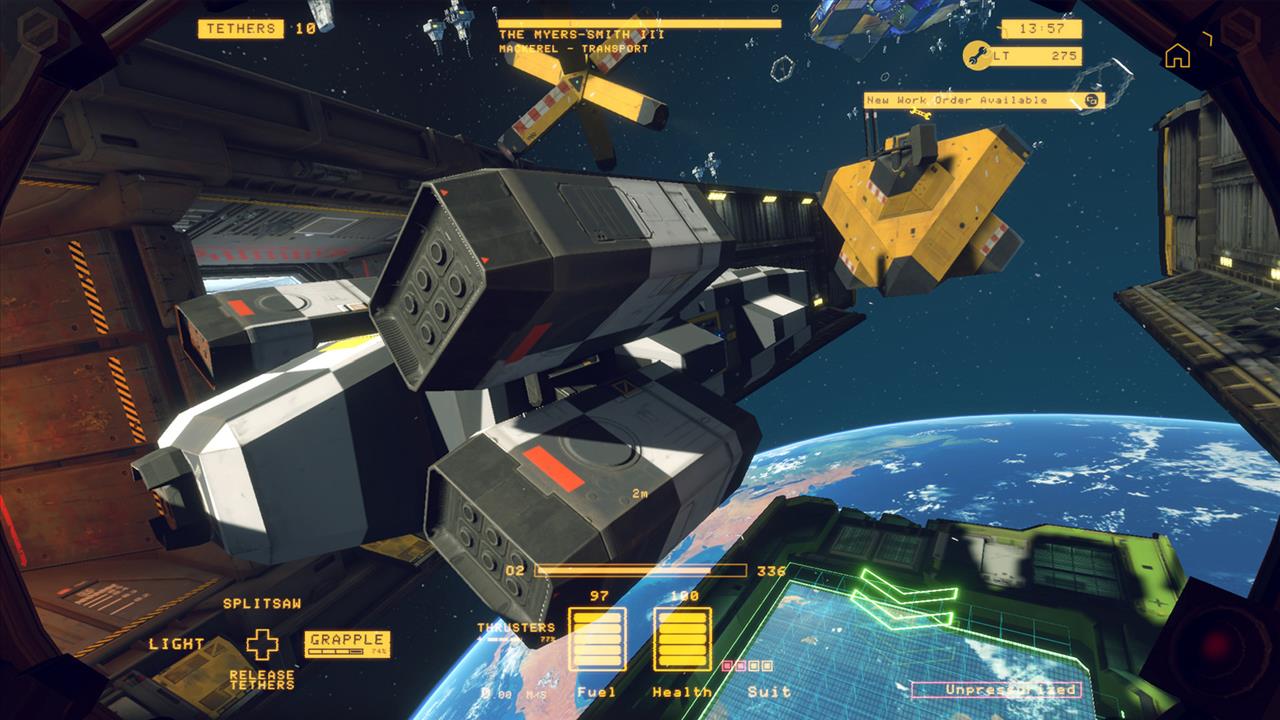 But you’re up here, floating between your job sheets and the habitation module, day in and day out. While you’re disassembling the remains of the Homeworld fleet, it feels like a Firefly-class transport could sail in here at any point and dock perfectly with the ambiance.

The grind is wonderfully mind numbing at times. I’d wake up in the morning, look at the blurry white details of the hab I was living in, and expect to see chicken scratches on the wall--I, II, III, IIII--with the fifth line scratching a diagonal across it all, counting off my days in this prison. 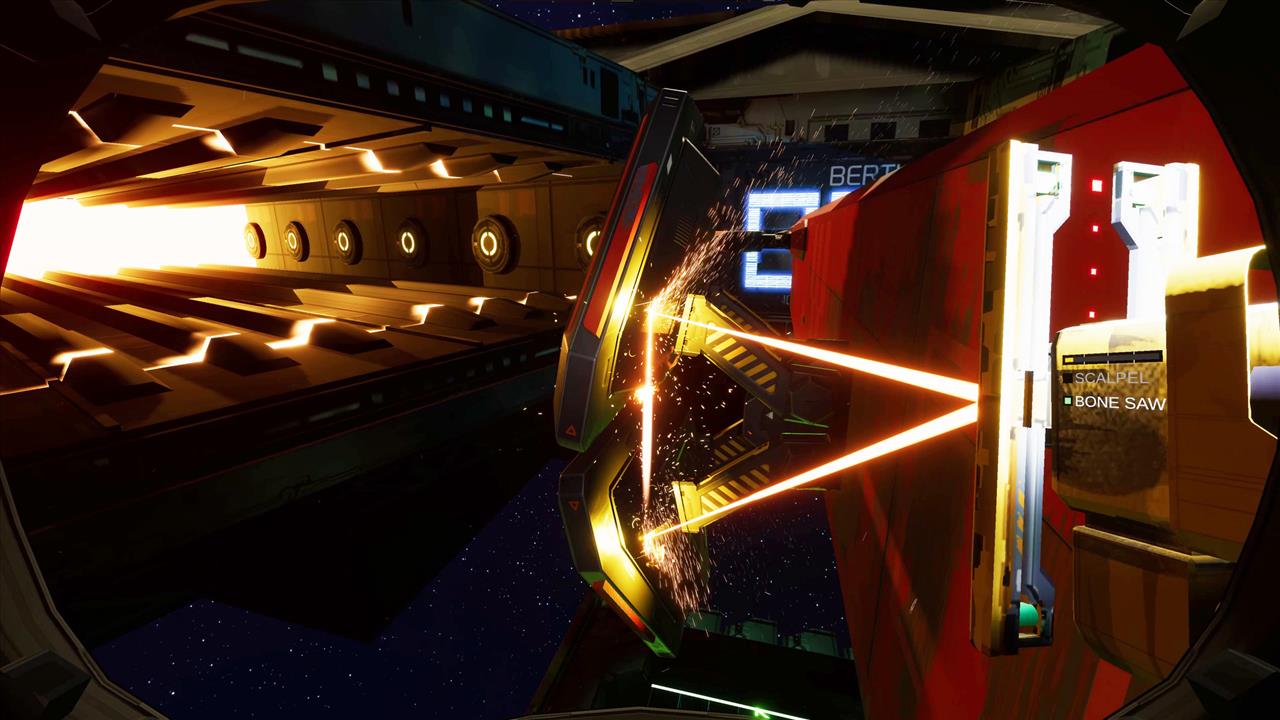 The bone-crushing debt you’re stuck with at the very beginning makes it very hard to see any kind of end game. A billion dollar debt? And each day I’m making only tenths of a percentage point of progress? Sure, every substantial piece of aluminum or whatever you process nets you some cash; not to mention those juicy internals like seats and computer components. But you get nailed with daily rental fees for your suit, your helmet, your tools, your refills of fuel and oxygen. It’s relentless. 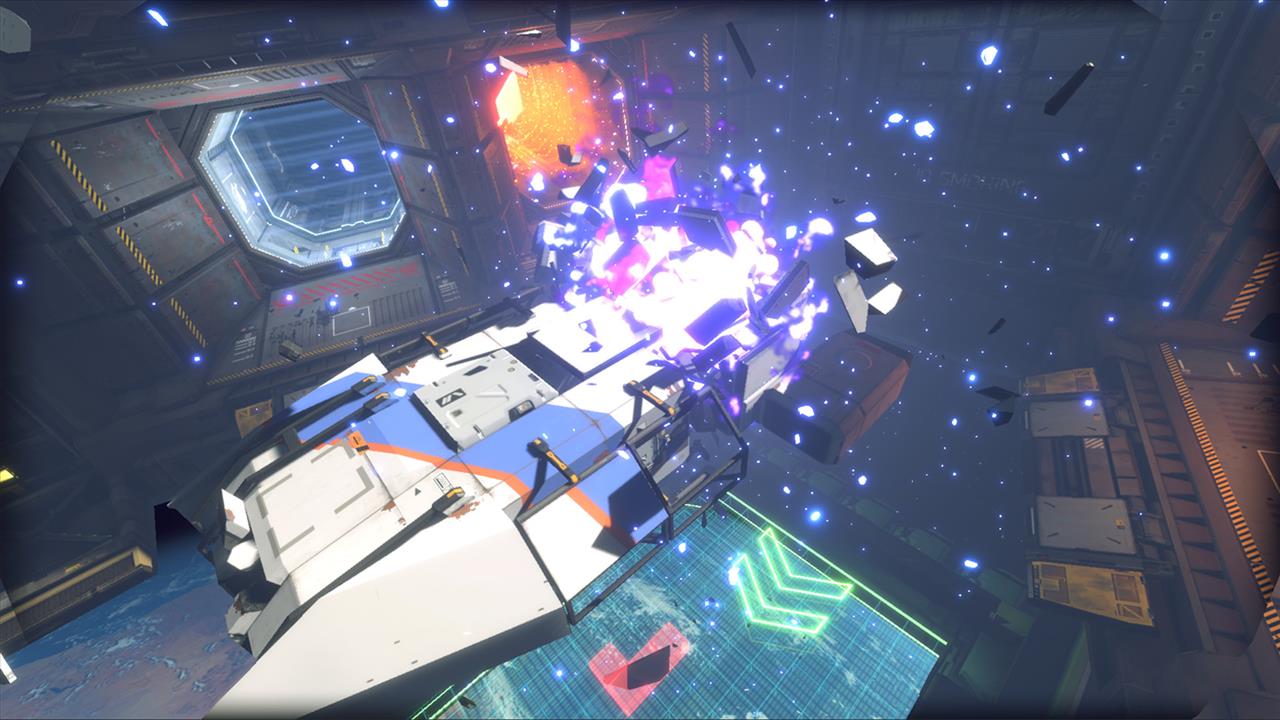 I was nervous, at first, that I was missing something. Hardspace is introducing some very new gameplay concepts. Things I’d certainly never done in any other game. And I was afraid it was going over my head. And it was.The game doesn’t put its best foot forward. But it all started making a lot of sense. After I finally pushed past that soul-crushing debt, of course. That enormous number is always looming, and it takes a long time before that number starts ticking down at a more palatable rate. I’ll put it this way: I’ve put a good 40 hours into Hardspace’s early access and I’m still not less than $900 million in debt.

I don’t want that to be the biggest takeaway from my time as a shipbreaker, however. What sticks with me  is the feel of parsing a complex ship down to manageable hunks. Then slinging those into their proper recycle bins with the panache of a BDSM mistress wielding a whip. Pulling myself through crawl spaces to access critical cutting points. Sending a ticking time bomb of a reactor down into the barge’s safety net. Working my way up the certification tree, taking on meatier and meatier assignments, really making marked improvements in my your and ability. All with a blue collar work ethic that I admire. 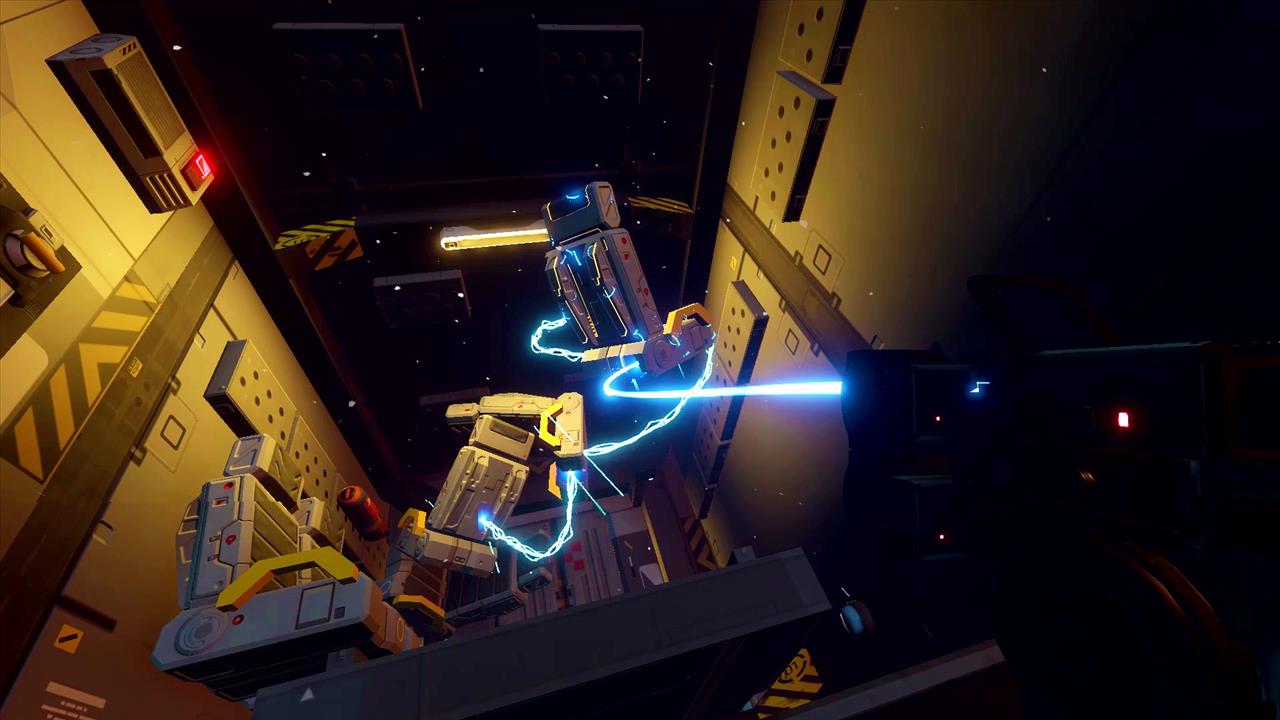 Blackbird Interactive has something special here. It’s story is hidden behind a little too much curtain. But I understand that that’s done to keep your work shifts moving at a decent clip. Each work shift, each new ship that pulls into dry dock, presents a fresh excitement. It is an eerie game at times. I sometimes felt like I could be in some prequel to Dead Space, even though Hardspace doesn't have aliens or jump scares, no bloody writing on the walls or severed limbs floating around. The inherent spookiness of operating solo on decommissioned spaceships was all in my head. The only thing that wasn't just in my head was the need to develop a zero-g puzzle-loving work ethic, keeping this fun and dangerous in equal amounts. Between your debt and being a shipbreaker, it's not bad being stuck between a rock and a Hardspace.