Tony Hawk Pro Skater fans, buckle up and prepare yourselves to fall in love with Funktronic Labs' new skate-boating game Wave Break. Set in a sun-drenched 1980's/Miami Vice-inspired seaside city, Wave Break follows the adventures of some adorable anthropomorphic animals as they fight crime and cruise the beach, all while grinding lines and performing sick tricks...in boats.

While Funktronic Labs has been recently focused on VR games, the company is dipping back into "flat" gaming for Wave Break. With some major action chops, amazing music, and fresh twists on familiar gameplay, Wave Break is set to splash onto Stadia later in 2020. Gaming Nexus has the opportunity to ask Kalin - Co-Founder of Funktronic Labs - a few questions about Wave Break, Stadia, and the future of game streaming.

Please tell us a little bit about Funktronic Labs. How did the team come together?

Eddie Lee, our other co-founder, and I worked together at Q-Games in Kyoto on the PixelJunk team, and after working on some spare time projects we wanted to go all-in. We wanted to make interesting fresh games with cool tech and cool art and cool music. Over the years we hired a few people to join the team, and now we have a great team that works well together and everyone really is passionate about gamedev.

Is there a story behind the name “Funktronic Labs”?

Funk as in the music genre, -tronic as in electronic, and Labs because everything is a little bit R&D / experimental. All our games are on some new tech or hardware, and trying out some new technologies and visual styles - trying to figure what's awesome in a totally new space is super fun for us. 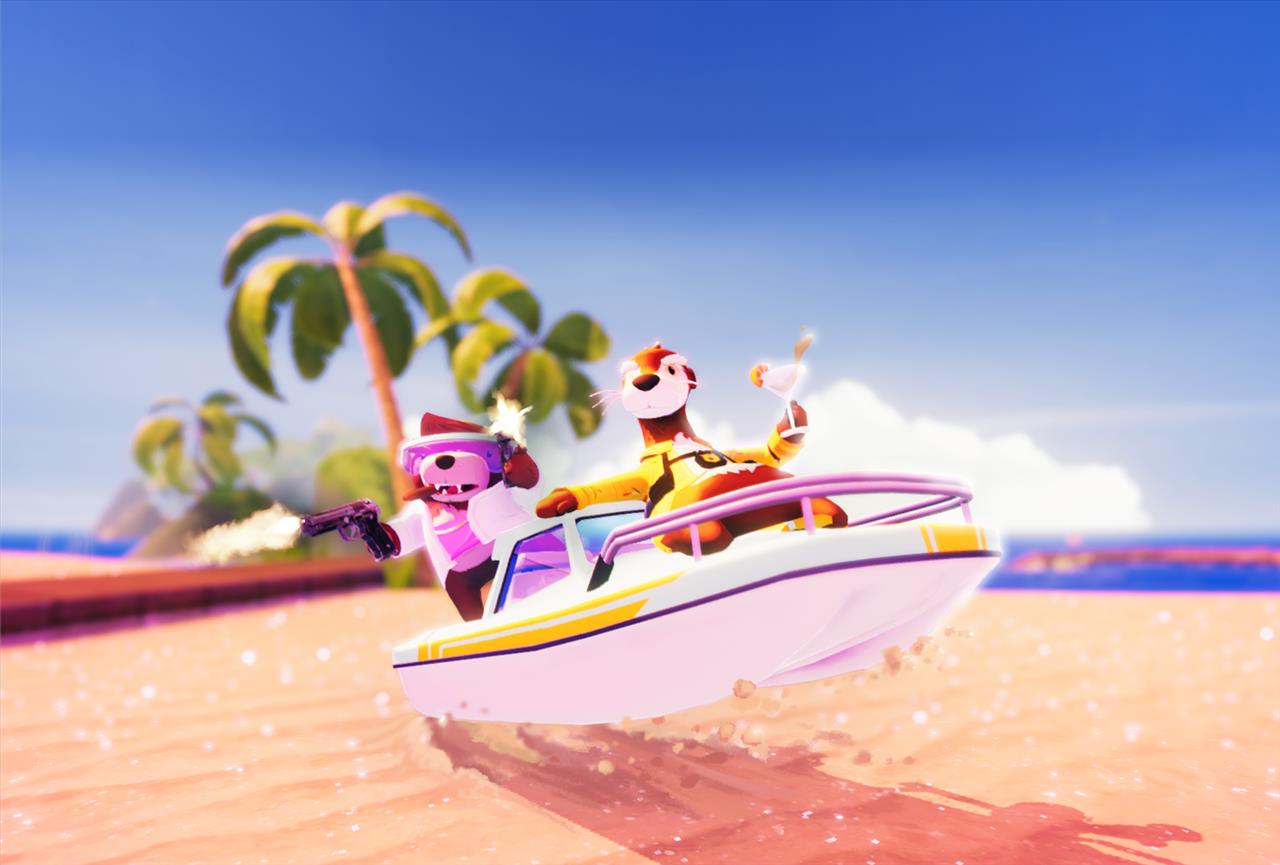 With Fujii, Starbear Taxi (that bear looks awfully familiar!), and Cosmic Trip, Funktronic Labs has firmly established itself as a VR studio. Is there a reason Wave Break is a traditional “flat” game? Was there ever a time when you were considering bringing it to VR platforms?

The water system we were experimenting with after Starbear: Taxi was sort of planned for a next VR game. Once the design went in the skating direction it didn't really seem to make sense in VR. Making a new arcade skating game felt too strong to drop it and figure out something else that did make sense in VR.

VR is a really complex and technically challenging space so it is something we enjoy, but there's still fun to be had outside of VR development-wise. Wave Break has a full dynamic water simulation, lots of custom rendering, and generally a lot of custom tech to keep it running fast. Our team is still quite small so it is enough of a challenge to put this much content together with our small crew!

The concept behind Wave Break is fantastic. Animals, in boats, in the ‘80s, doing Tony Hawk-like skateboard tricks in a sun-washed Miami-like world. Ideas like this don’t just pop out of nowhere. How did this one come about?

I think each one of those ideas did just pop out! We just didn't say no a lot, and tried things out early on, and threw away all the stuff that wasn't fun or cool. At the core we knew what we wanted the skating feel to be like, and experimented with tons of stuff on top of that. Most of the best ideas just come from 'what if…' banter over lunch, then doing a quick hacky test of it in the afternoon. 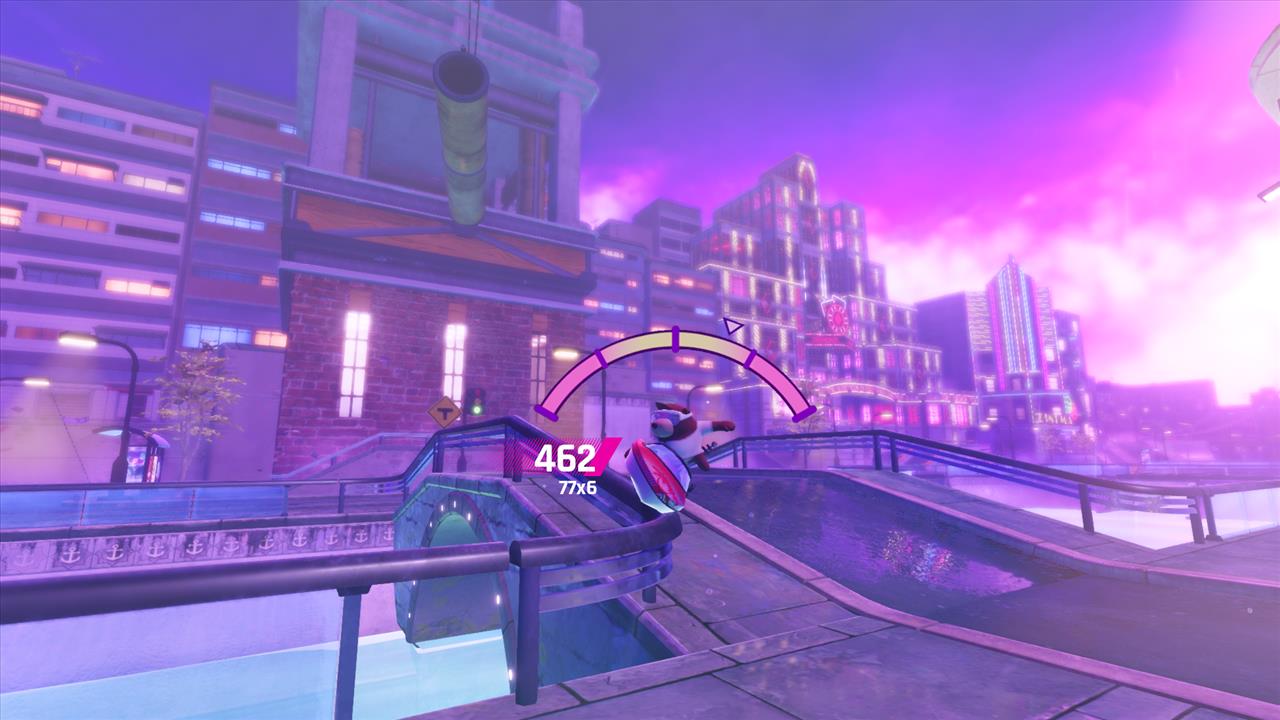 Looking that the trailer, I noticed a quick screen of Tony Hawk Pro Skater-like goals. Could you explain the basic game loop in Wave Break?

There is a single player campaign that has 'classic' objectives like you imagine - high score, pro score, secret tapes. There's also some light story missions around the stages. You play in 2min rounds and complete what you can.

Beyond that, there's familiar Time Attack mode where you try to get a high score in time limit, Deathmatch mode where you try to kill your opponents, and Free Skate modes, where you could just explore each level without a time limit.  As Wave Break was built for multiplayer, you can play these online too, or jump into a skill-based matchmaking queue.

I did see a gif on your site of the Don Johnson bear using a gun to clear some obstacles in his path. What role do weapons play in Wave Break?

Guns in the game are there to kill your friends, make new enemies, and blow things up. All those things add points, so if you can pull it off mid-combo you get even more score. It's a little bit more dynamic than just the static trick lines. It does a little air kickback so you can do some subtle trickery there too! 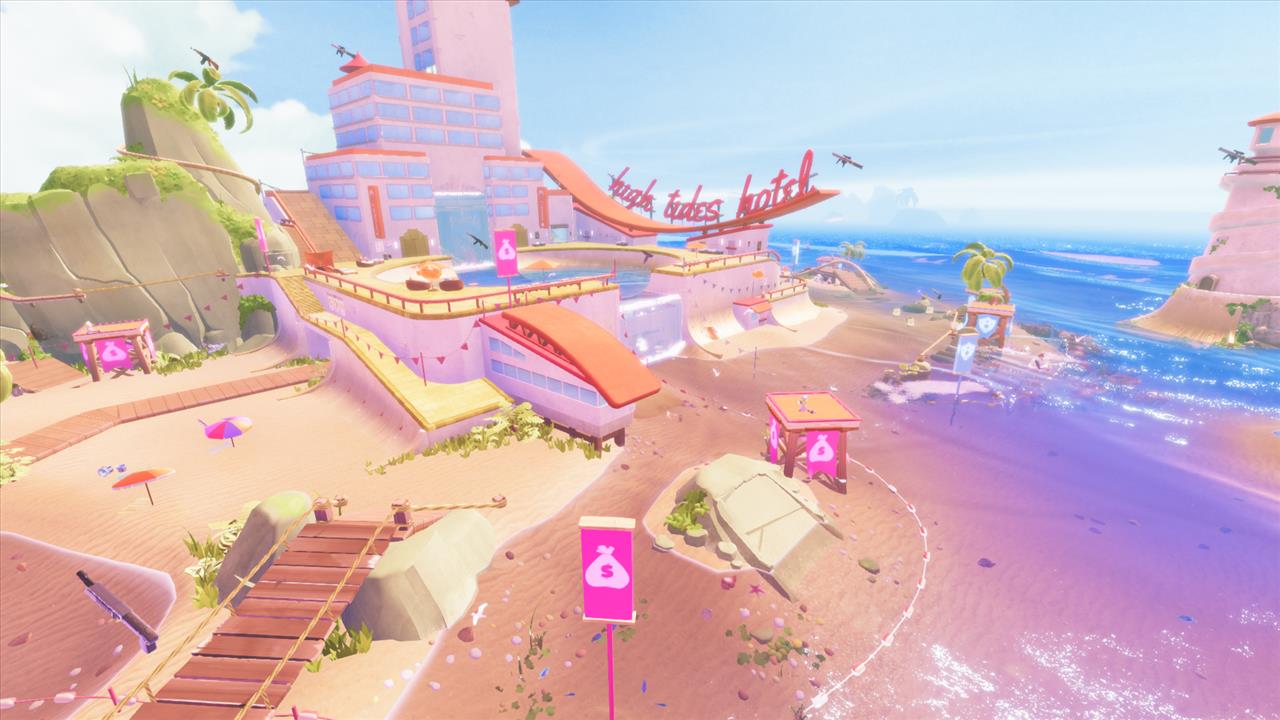 I saw this rather unexpected quote on your site: “Uncover the rivalry firsthand between the Mafia’s Big Pin and Detective McHutchenson in an episodic storyline involving guns, kickflips, and blood money.” Could you please elaborate on the story elements in Wave Break?

The story will have to be played through in the campaign, but the vibe is 80s Miami Vice cops & robbers style TV show episodes. Big Pin likes to start business enterprises that are not 100% legal, and Detective McHutchenson is the grumpy and jaded veteran that wants to retire, kind of like Danny Glover in Lethal Weapon. The story doesn't take itself too seriously, but it has some fun and quite challenging mission objectives.

Could you talk a little about the split screen mode? Are there things you can do in multiplayer that you can’t in single? Are there different goals?

We’ve included a split screen mode that allows for players to play local and online multiplayer.  You can just hit start in the Main Menu and play splitscreen whenever. The campaign missions are single player right now, but everything else is freely playable online - either by inviting friends or through online matchmaking. 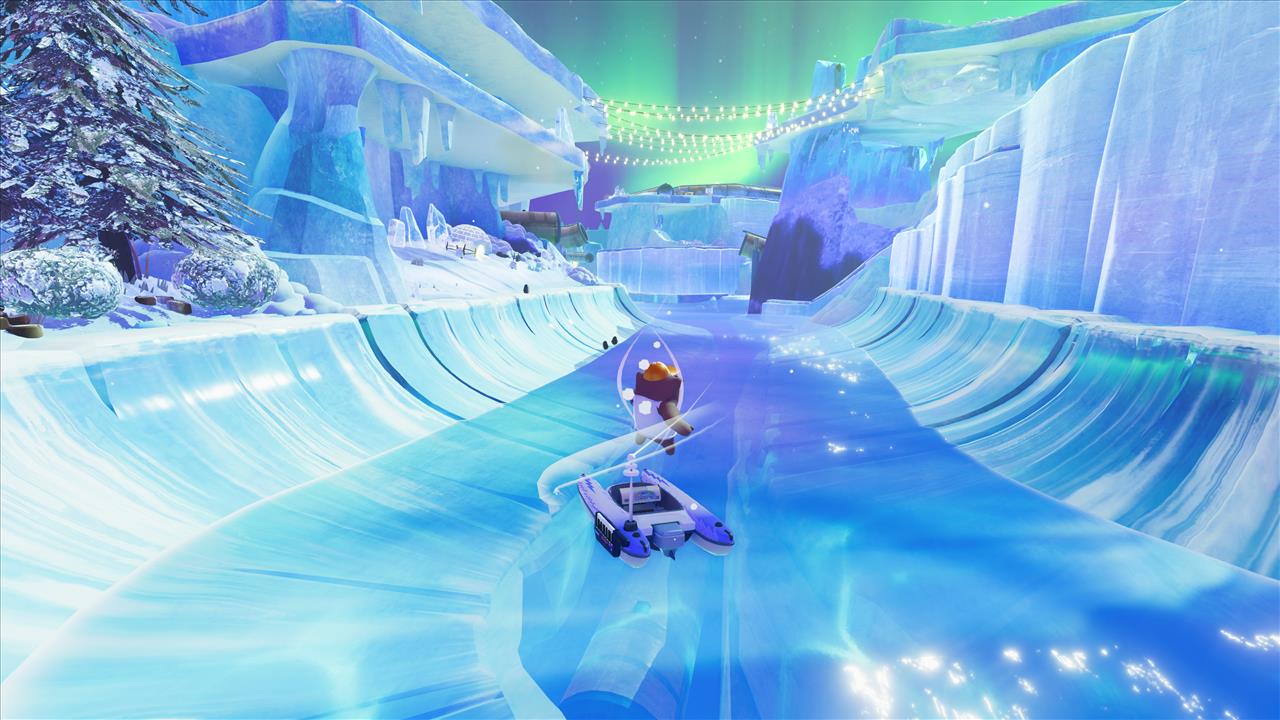 Are there differences in the ways that the characters play? Do they have individual skills and weaknesses?

They have some very slight different stats at the onset, but you will be able to buy stat upgrades that will eventually even things out.  High skill players will know the difference initially, but we encourage players to keep playing

How did you decide on the visual aesthetic for Wave Break? Were there any interesting iterations that you eventually moved away from?

Just looking at various aesthetics, the 80s synthwave style was just really fun to work around with. A lot of cool styles, awesome old TV shows for reference, and tons of great music styles. I can't even remember the other styles we thought about around that time now, as this one just felt right. Can't beat the 80s! 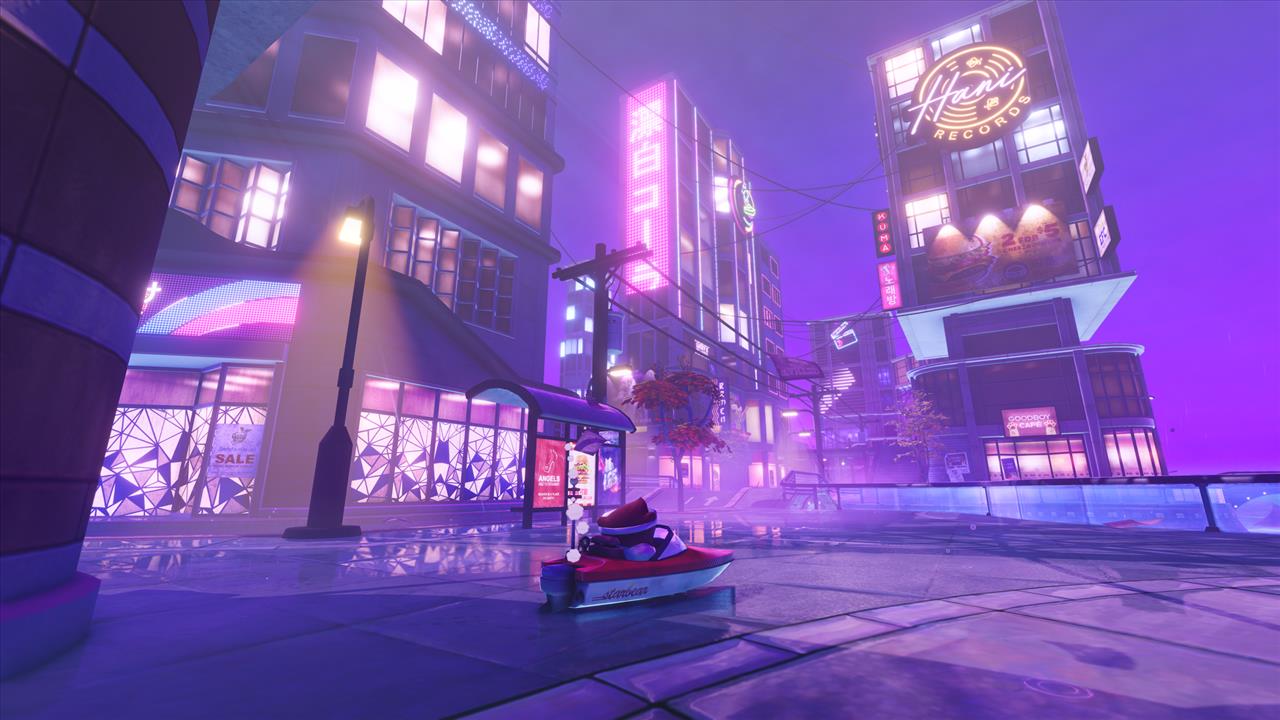 The music is clearly a big part of the overall atmosphere in Wave Break. Could you talk a little about the music in Wave Break? Will it be available to stream?

Music is a huge focus for the game - we went and got some really special artists to make custom music for Wave Break. Half the time in skating games, you're just chilling out, listening to music while doing combos, so we want the music to be really high quality. It'll be available outside the game too, and we'll definitely have more music coming in the future.

Wave Break is part of the First On Stadia program. Could you describe how your relationship with Stadia started?

When we first showed Google Wave Break, they were really into it. They were great in that they allowed us to create Wave Break with full creative control. It worked out nicely for us to get the game to the finish line, and it's been nice and straightforward to work with the Stadia team.

What are some of the benefits to developing on Stadia?

With everyone working from home now, it's definitely easier for us to all work cloud-based, with no carrying devkits around. It's nice to know on the user side that there's not really any fuss of what device it's running on, that it's all the same experience.

I’ve been dying to ask someone this: Do you think, down the line somewhere, streaming platforms like Stadia will be sufficient to allow the streaming of VR games?

Seems possible, but it seems that there's a lot of hard engineering work to make it happen. A lot of the layers of software between the network cable and the headset need to be trimmed down, a lot, and maybe some clever predictive headset motion to wrap it up. There is some progress on wifi-based streaming headsets here and there but the major heavy lifting seems to be on portable headsets right now, so who knows how it all turns out!

Gaming Nexus would like to sincerely thank Kalin and Funktronic Labs for their participation in this interview.