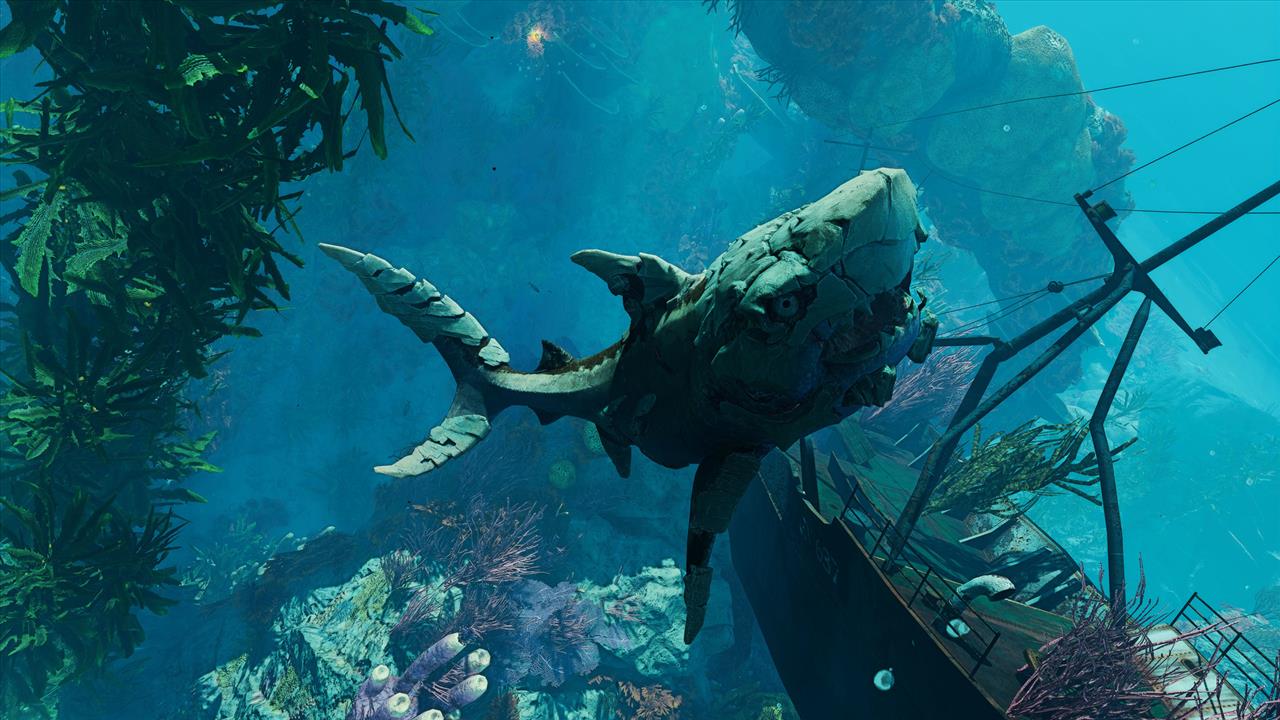 I silently cruise the shallow tributaries of the bayou, searching through the schools of meandering fish for my prey. Every now and then a stray grouper or muskie wanders into my path, and I absently chomp it down into my gullet rather than take the time to go around. I haven’t been back to this mucky, lively place since I was a young shark, back when alligators used to send me scurrying off to the reeds to hide.

But gators give me a wide berth now, or pay the price. I’ve sent more than 50 of them back into the ecosystem with the mobile gator-recycling furnace in my belly, and I have no qualms about doing it again. And that’s why I’m here. One of these gators has risen up to the level of Apex Predator, and I’m simply not having it. There is only one Apex Predator in these waters, and it’s me. 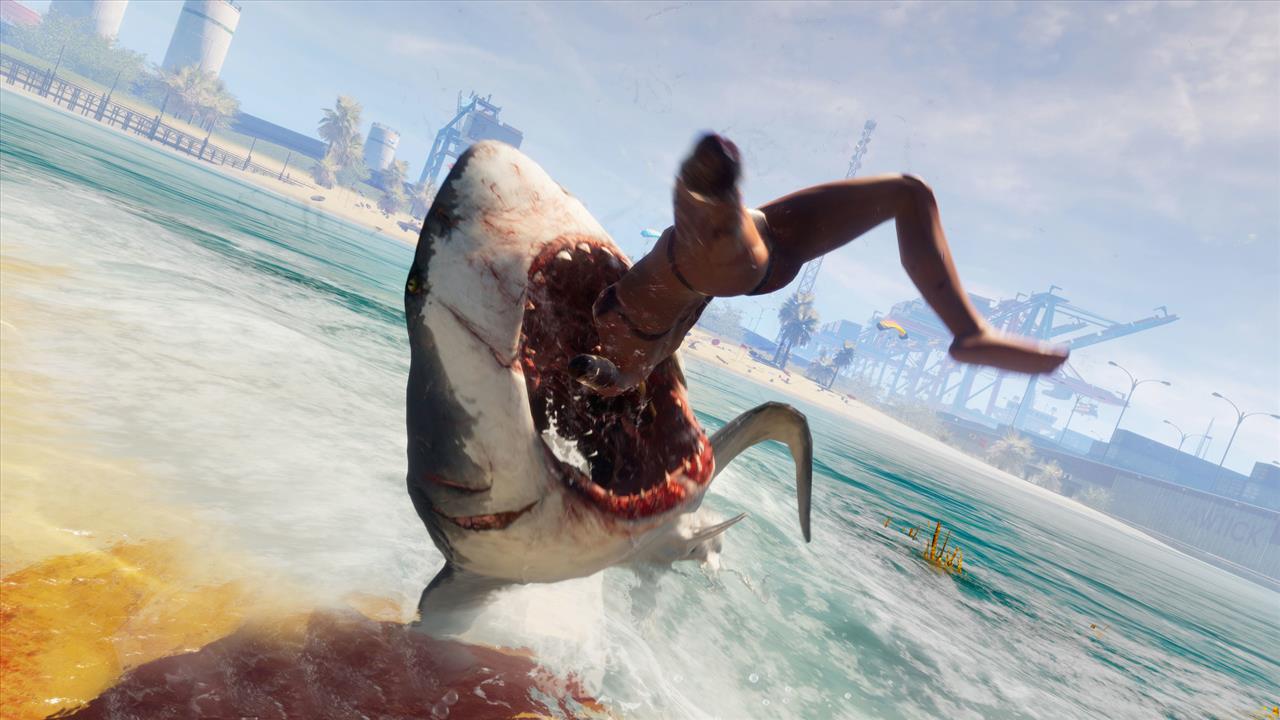 Coming around the corner, I see him floating there silently. Luckily, he’s facing away from me. I need to get a few good bites in on him to let the electrical current running through my teeth do its work before he can turn on me. Gators are dumb, but they can be ferocious. I’m hoping to get a couple of his legs off of him before he even knows what hits him.

But something goes wrong. Perhaps it’s the scurrying groupers, or my shadow on the floor of the river, but he senses me coming. He whips around and grabs me in his enormous jaws, immediately plunging me into a disorienting roll as he tries to tear me apart. I thrash to get away, and hit the afterburners to get out of there. He chops at my tail the whole way, reducing my health down to just over half. 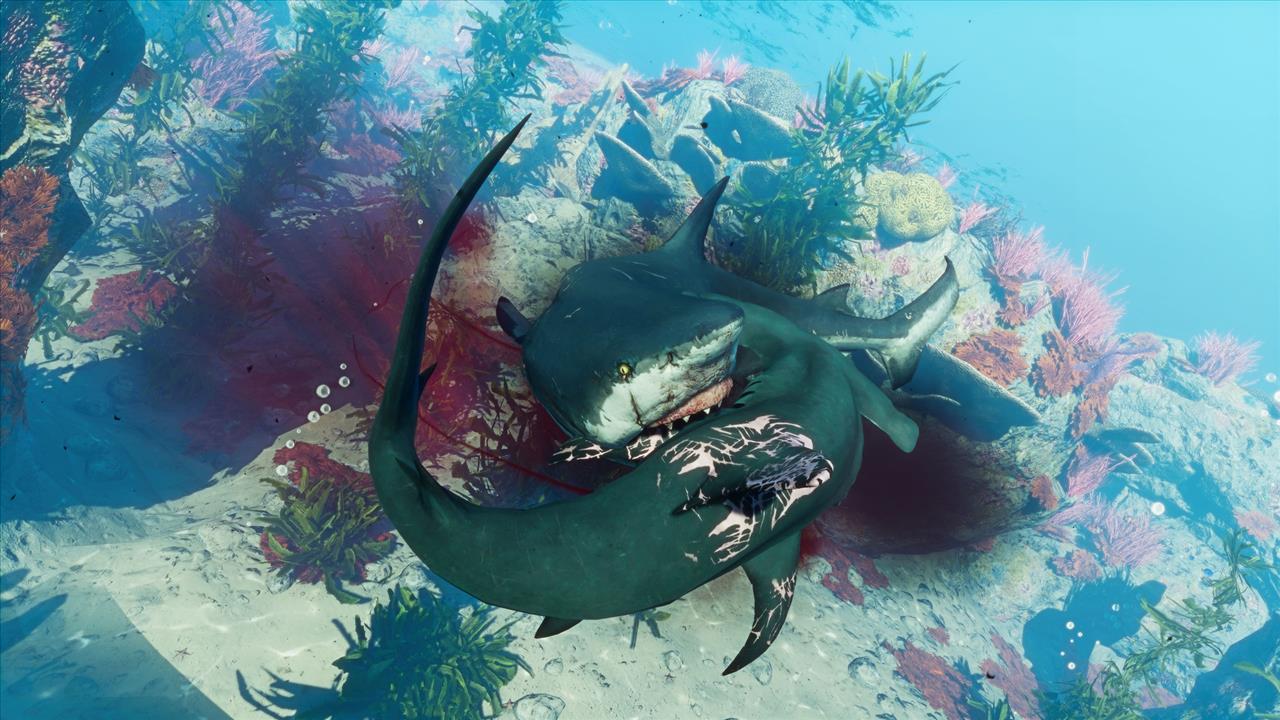 None of this went the way I expected it to, and its clear that I’m going to have to rethink my approach. I circle around, lock my vision in on the Apex gator, and zip over to him. Then I mash the attack and evade button together about 30 times until he is dead. The framerate goes to crap for a while, but it shapes up for the second half of the battle. It doesn’t matter. This button combo works almost every time.

You can occasionally fool yourself into thinking that Maneater is more than it really is – but in the end, this is a very fun, kinda goofy game, with tons of video game-y mechanics and foibles. The undersea battles often play out like aerial dogfighting sequences, and button mashing more often than not gets the job done. You can roleplay, sure. But in the end, Maneater’s silly humor and familiar systems will pull you out of your reverie to reveal that yes, this is a video game. And a none-too-serious one, at that. With its cheerful, referential sense of humor and sudden, jokey violence, Maneater is more Saint’s Row than GTA. 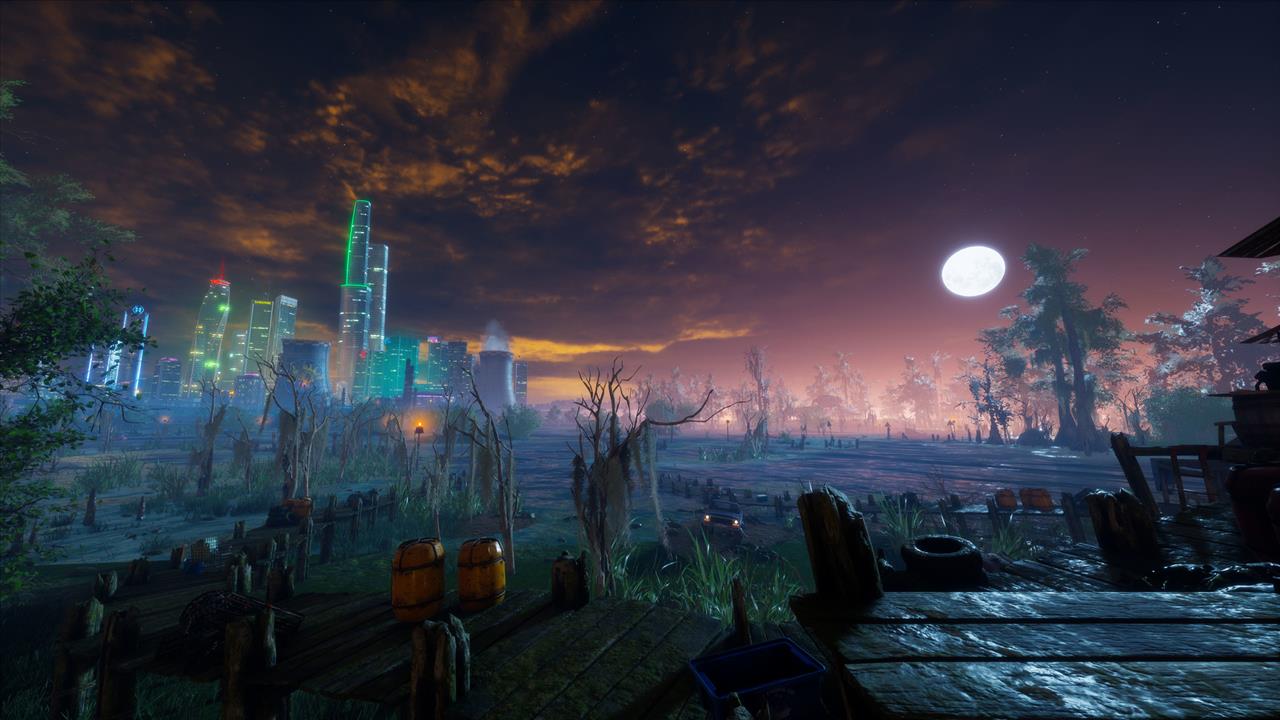 I cannot express how excited I was to play Maneater. The audacity of the concept alone was enough to get my gamer juices flowing in overtime. An open world RPG where you play as a shark, wandering around a bay and chomping innocent people at your discretion? Oh yes. That, please.

My deep excitement for Maneater has cooled ever so slightly, as I got into the game and discovered that there is a lot of repetition in the mission structure. But let us keep it real. This is a shark in the ocean we’re talking about, known for swimming and eating. The options to construct missions around are limited, and even so, Maneater is a pretty good time. Sure, there are some systems here, but much of the game is spent swimming around and goofing off. 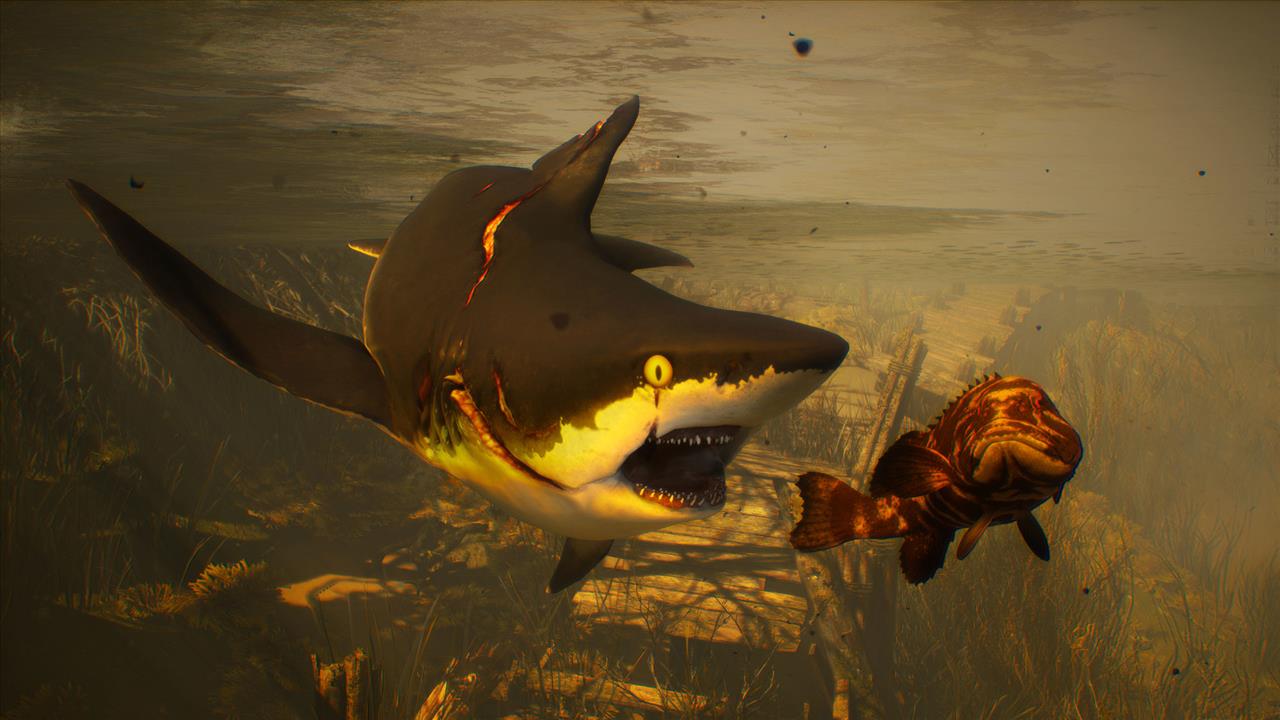 In an amusing touch, Tripwire Games chose to build Maneater in a way that mimics an episodic nature television program. This allows for some great moments, with narration by SNL and Rick & Morty’s Chris Parnell chiming in every three minutes or so with some fairly amusing nonsequiturs. His deadpan delivery alternates between interesting facts and wry observations about Maneater’s world (and rather incompetent inhabitants).

Players start the game by getting ripped from the womb of their shark-y mother by the subject of the television series – a fisherman with a nautical name I can never quite recall, but I always think of him as Stinky Pete. The baby shark gives ol’ Pete a good chomp, and then vanishes into the bayou, ready to make a name for himself in the undersea circles.

Most of the early game is spent doing simple missions while slowly leveling up. Players are tasked with simple stuff, like eating 10 of a specific fish, or hunting down various collectibles. These early hours are a bit slow, as you aren’t really powerful enough to put up a good fight, and are forced to either hide or retreat from the bigger creatures lurking around. Eventually, you will level up enough to leave the bayou, and things open up a bit.

As you make your way out into the world, you will find yourself doing more of the same stuff: eating ten fish, looking for license plates to eat, etc. But the leveling system and build-driven upgrades brighten things up significantly. 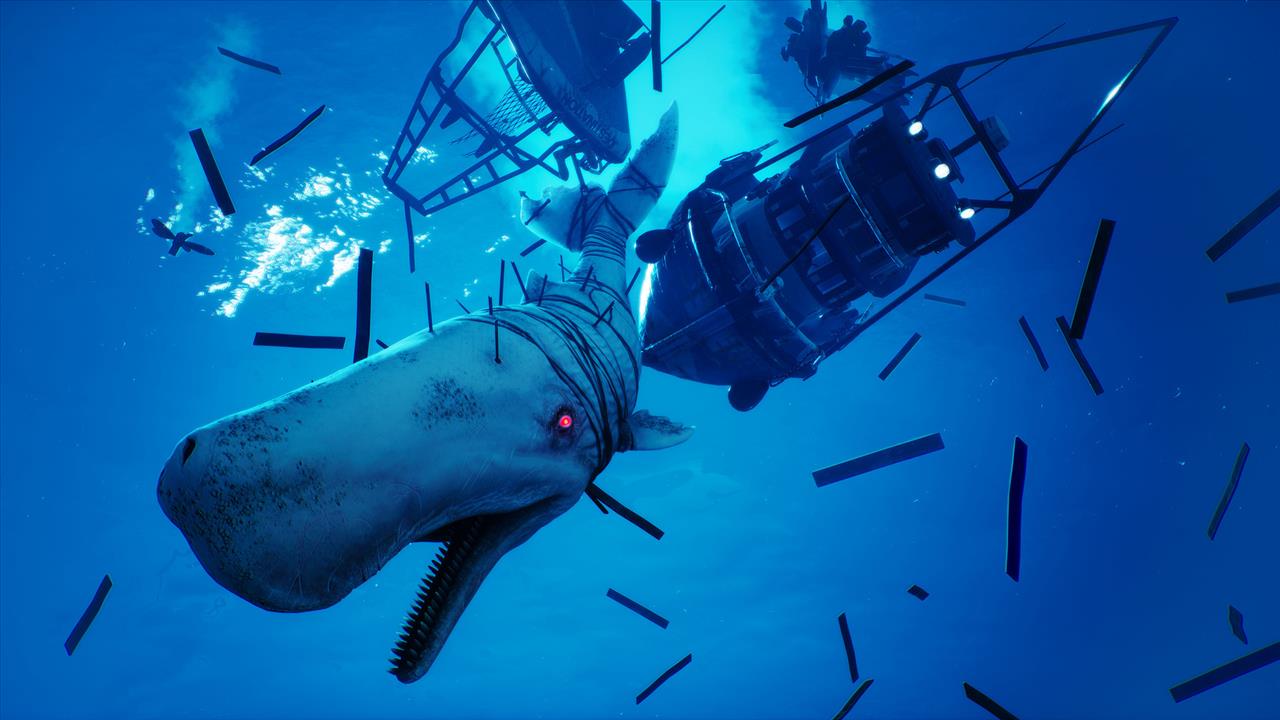 As players complete tasks – collecting a certain number of widgets, defeating high-level sea creatures, or overcoming a succession of human hunters – they are granted a power-up that soon converts their shark into a superfish powerhouse. True to its over-the-top nature, Maneater doesn’t place the player in the body of any old shark. No, this is a mutant shark, and its loadout can be switched around as easily as switching equipment in any RPG.

There are three primary builds: Shadow – a poison and stealth build, Bone – enhances attacks and durability, and Bio-electric – which allows for stuns and area of effect attacks, which can be mixed and matched to create your optimal build. I stuck mostly with Bone body parts (you end up with head, tail, fin, and teeth attachments), and used some of my other optional “organs” to build up a tank of a shark that could withstand any punishment. 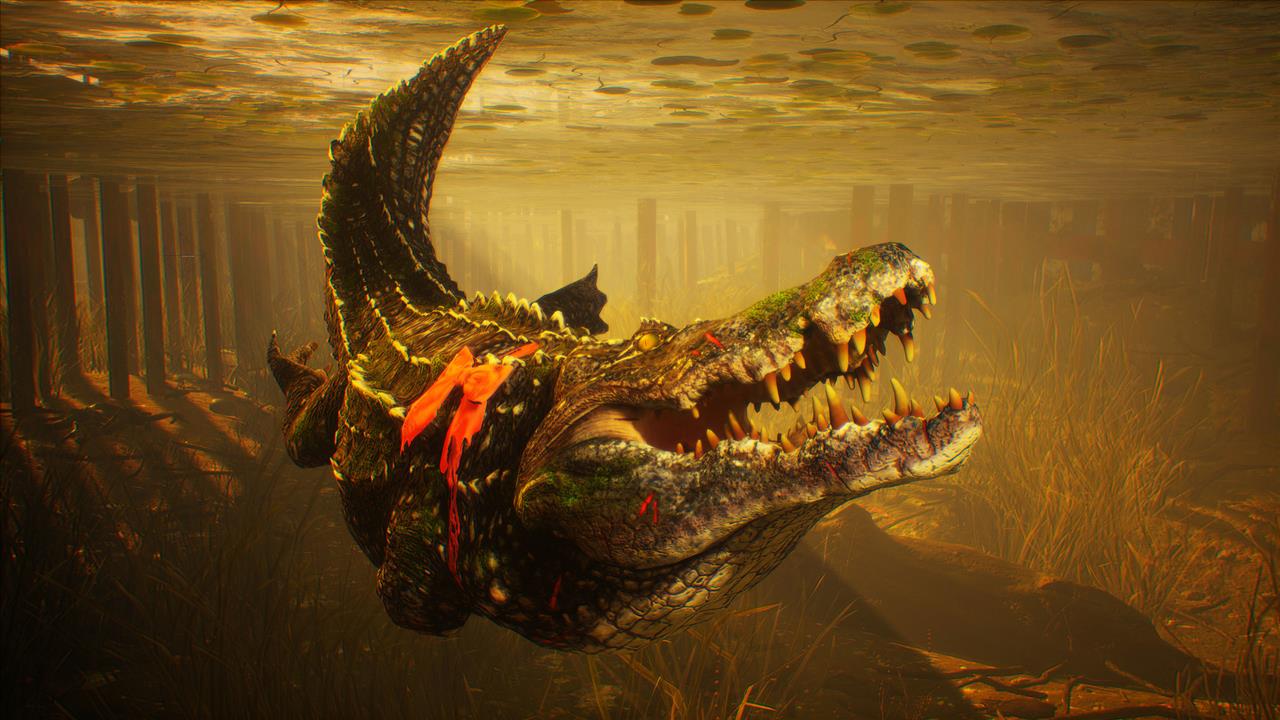 With this build, I was able to cruise through the end game content with little difficulty. Though, to give credit where it is due – I did struggle a bit to kill a Sea World orca. Until, that is, I realized that if I could trick him into coming onto land he would just lay there like a lump while I chomped on his big dumb Shamu face. But that was the only time I had to cheese the game, as my aforementioned button mashing did the trick for the majority of battles against both man and beast.

Unfortunately, some fairly severe technical issues do make some of these battles a chore. I played on a standard PS4, and to say that the engine chugs during intense action sequences would be an understatement. For the worst of the battles, I tend to flip around excessively, biting at boats like a mad thing. During these sessions, the framerate would sometimes drop to as low as maybe three frames a second, severely hampering my ability to see what was going on. I’m by no means a framerate counter – I generally don’t care unless a low rate hampers my ability to play a game – but in this case the rate dropped so low that the game bordered at times on unplayable.

Between the framerate issues and the repetitive mission structure, some players may be scared away from Maneater. But I still had a pretty good time with this game, as the completionist in me obsessed over nabbing every collectible, and the over-the-top aesthetic kept me engaged and amused the entire time. Sure, the storyline is a bit light, and eating 15 seals over and over gets a little old, but the thrill of cruising up to a beach and wrecking shop on hapless bathers, or jumping into the air and snatching some chump out of a rowboat never gets old.

Maneater is a pretty solid first swing at a new franchise, a fresh twist on an established genre. I look forward to seeing where Tripwire take things going forward. Like I said, the mission structure for a shark can be limited. But nothing says that sharks have to stay in the ocean, right? Surely a shark could make it to a space station somehow. Or a summer camp. Paris? I’m just spitballing here. But, like its aquatic protagonist, I think there is plenty of room for Maneater to grow, and I’m excited to see how the franchise mutates in the years to come.

Maneater is a solid first entry in a new open world RPG franchise. Repetitive missions and some fairly severe framerate issues hold the game back a bit, but overall Maneater is a good bit of summertime gaming fluff. You can't beat the feeling of chomping people at the beach, and Maneater provides just what gamers are looking for – fun carnage with just enough structure to keep players motivated.