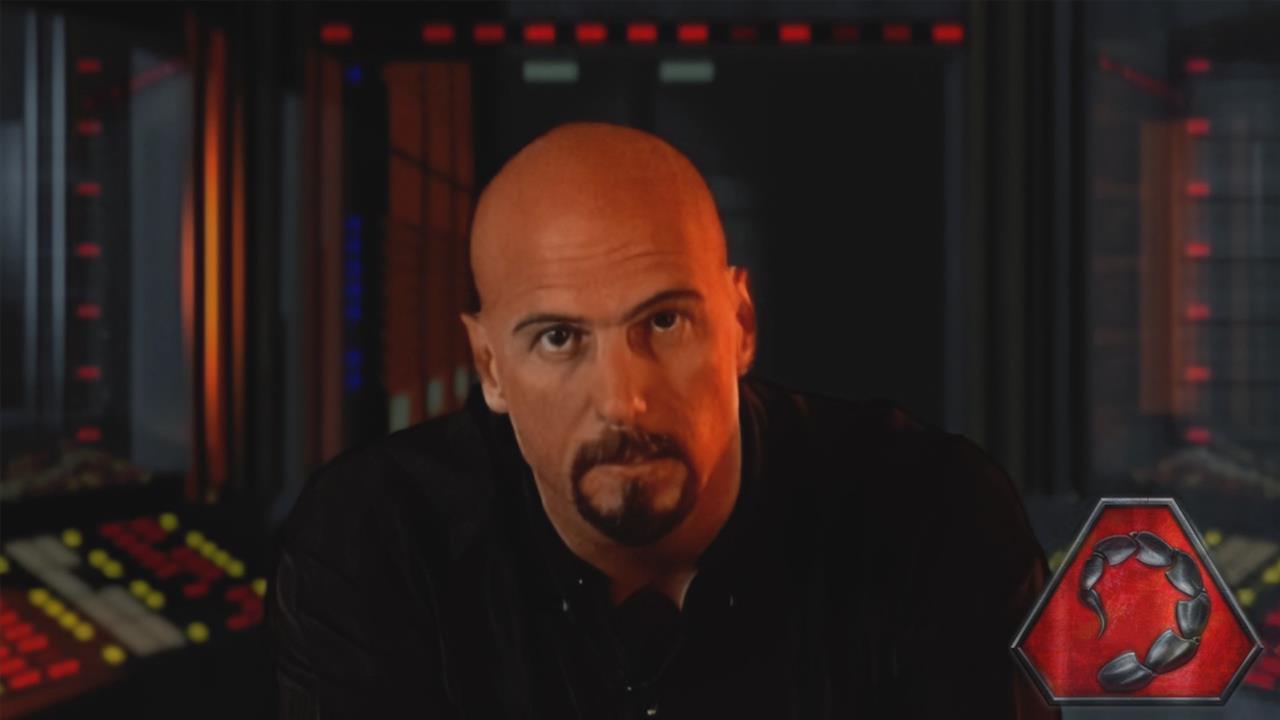 Written by Zachary Atwood on 6/26/2020 for PC
More On: Command & Conquer Remastered Collection

It's hard to think of a more iconic real-time strategy game than Command & Conquer. I was only two years old when the original Command & Conquer released, but it's still the first thing that comes to my mind when I think of RTS games. Throughout my childhood, I played any video game I could get my hands on. At some point, I crossed paths with the Command & Conquer series, but I don't have anything more than a few fleeting memories of the early missions. Roughly 25 years after the original release, the Command & Conquer Remastered Collection revisits the earliest iterations of the series. Given the number of RTS games I've played over the years, I was thrilled to finally sit down with one of the originators of the RTS genre.

The most important thing to note is that the collection is a remaster, not a reimagining. Petroglyph, the development studio, seems to have gone to great lengths to modernize the look and feel of the game without changing the core gameplay that defines the series. 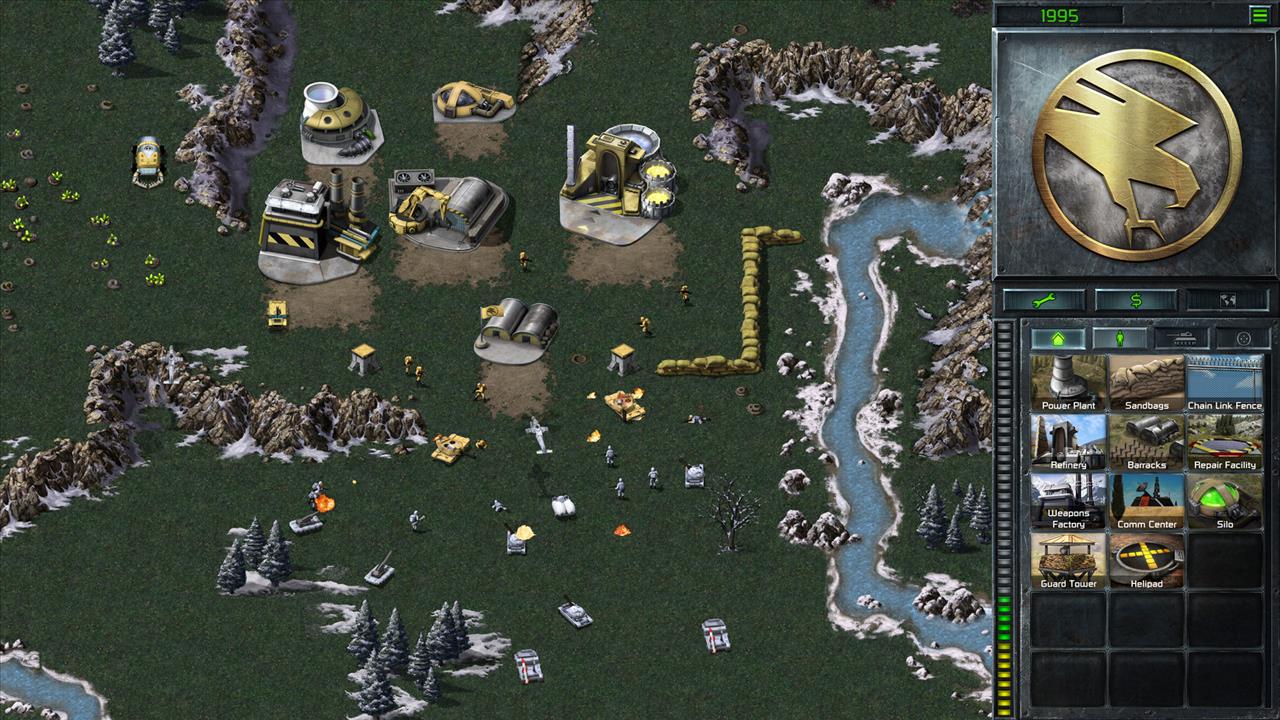 For those unfamiliar with the previous titles, players have the choice of two different factions during the story. Command & Conquer offers up the Global Defense Initiative or the Brotherhood of Nod, who are locked in a battle for global control over a resource called Tiberium. This all takes place during an alternate timeline in the 1990s. Red Alert occurs in an alternate history where Hitler was removed from the timeline, resulting in the Soviet Union rising to power in place of Germany. Players have the option to play as the Allies or Soviets. Each campaign has its own set of unique missions. These missions focus around the same idea, which generally has the player building a base and units to destroy the enemy base. However, the player is occasionally hit with different types of missions, such as taking a small number of units into an area to recover important tech.

Outside of the campaign, players have access to Skirmish mode, which allows them to face off against AI in the more traditional RTS setting. The games multiplayer has also been revamped, allowing for the hosting and joining of lobbies. There's also a quick match functionality, which quickly pits you against a single human opponent. The quick match lobby even has a global leaderboard, so there's more to chase than just a single game. 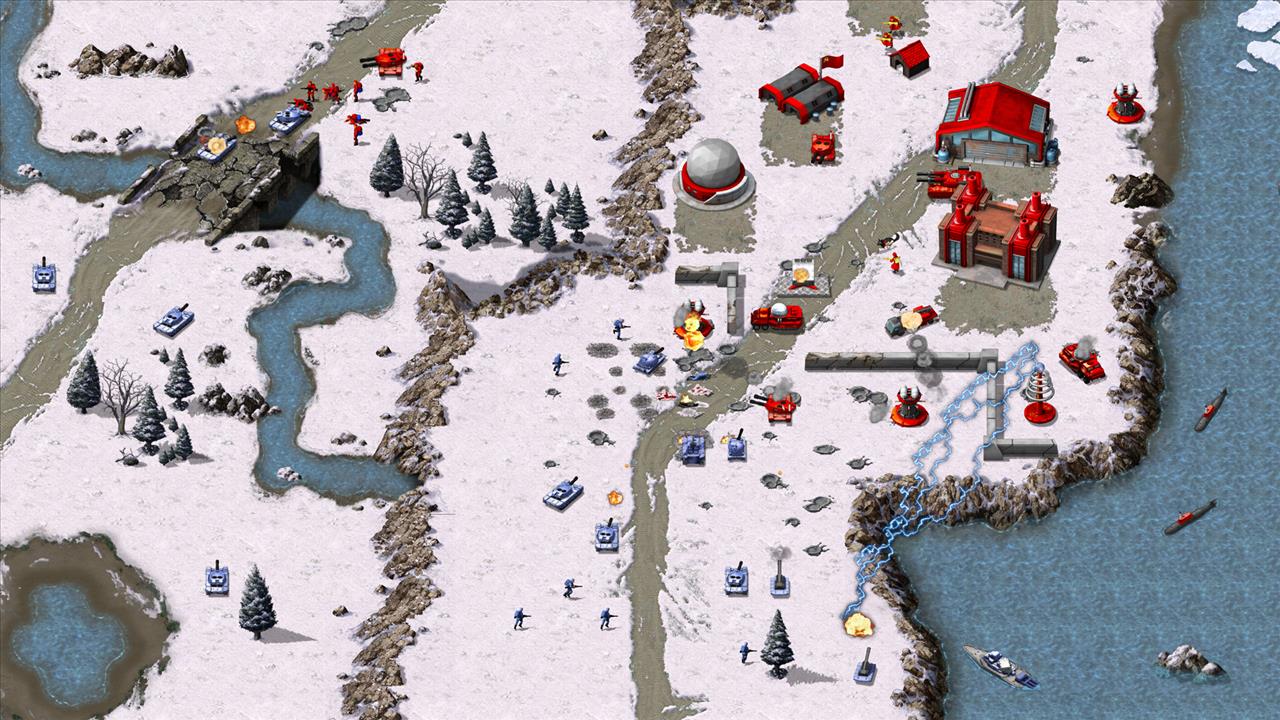 Preserving the core gameplay experience is by far the collection's greatest success. Despite all the improvements to graphics, music, and menus, the gameplay still evokes the same feelings I had as a kid, even from my limited time with the game. It's hard for me to guarantee that feeling will be the same for veterans of the series, but Petroglyph seems to have done a fantastic job of staying true to the soul of the originals.

Visually, the game has been significantly overhauled from its original form. Maps, buildings, and units have all gotten quite the facelift. All the new art is fantastic to look at and still succeeds in capturing the spirit of the original designs. One of the best features of the remaster is the ability to toggle between the old and new graphics with a tap of the space bar. It's mind-boggling to be able to instantly visualize what the game looked like then vs. now. 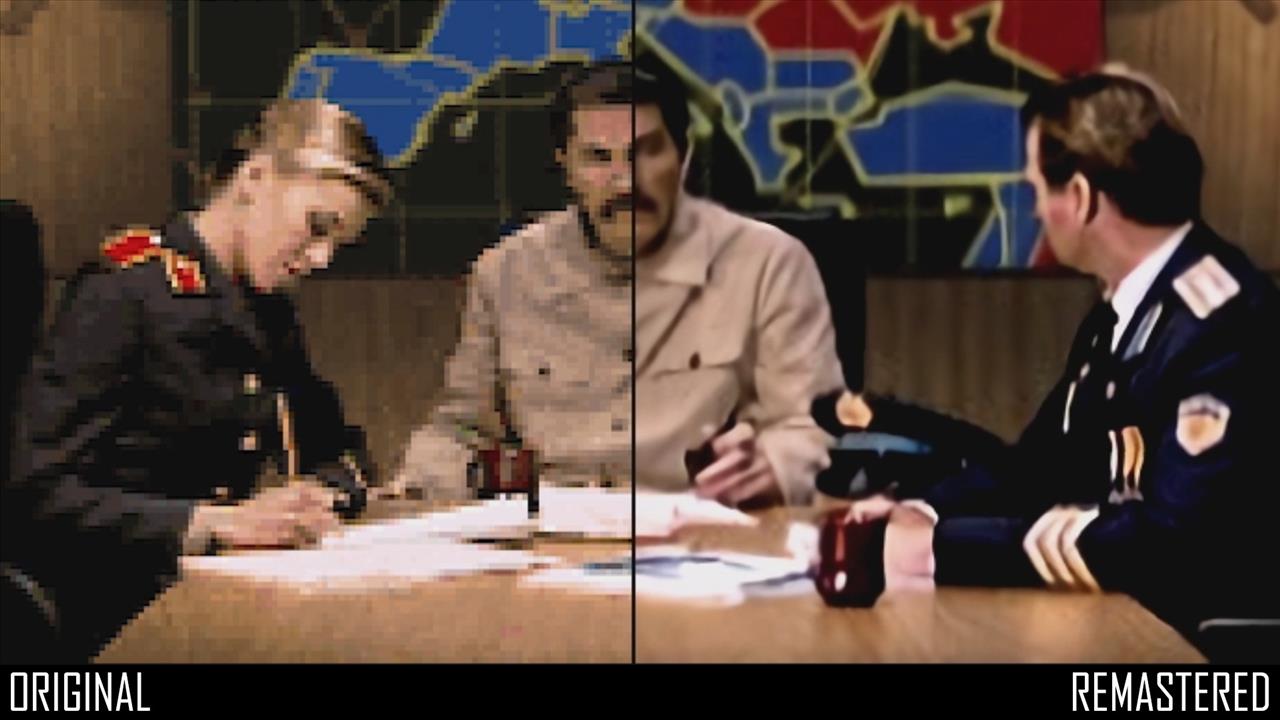 The only real complaints I had about the visuals were the cutscenes between story missions. The cutscenes are normally a blend of live-action and computer animation, and some of the original footage and animations did not hold up well at higher resolutions. There were a few that were so pixelated I could barely tell what was going on. Considering that's the only notable issue I found, it's a small price to pay for what is otherwise a beautiful looking remaster.

The remaster has a lot of good going on, but one of the biggest standouts is the music. All the original music has been remastered, with 20 of the original tracks being completely re-recorded by the original composer, Frank Klepacki & the Tiberian Sons. All in all, it's well over seven hours of music for the remastered collection, and it's an absolute treat to listen to. In addition to having access to both the original and remastered music, the game has a jukebox function that allows players to create their own customized playlists. It's fairly painless to use and is a nice touch when you start to spend more and more time in the game. 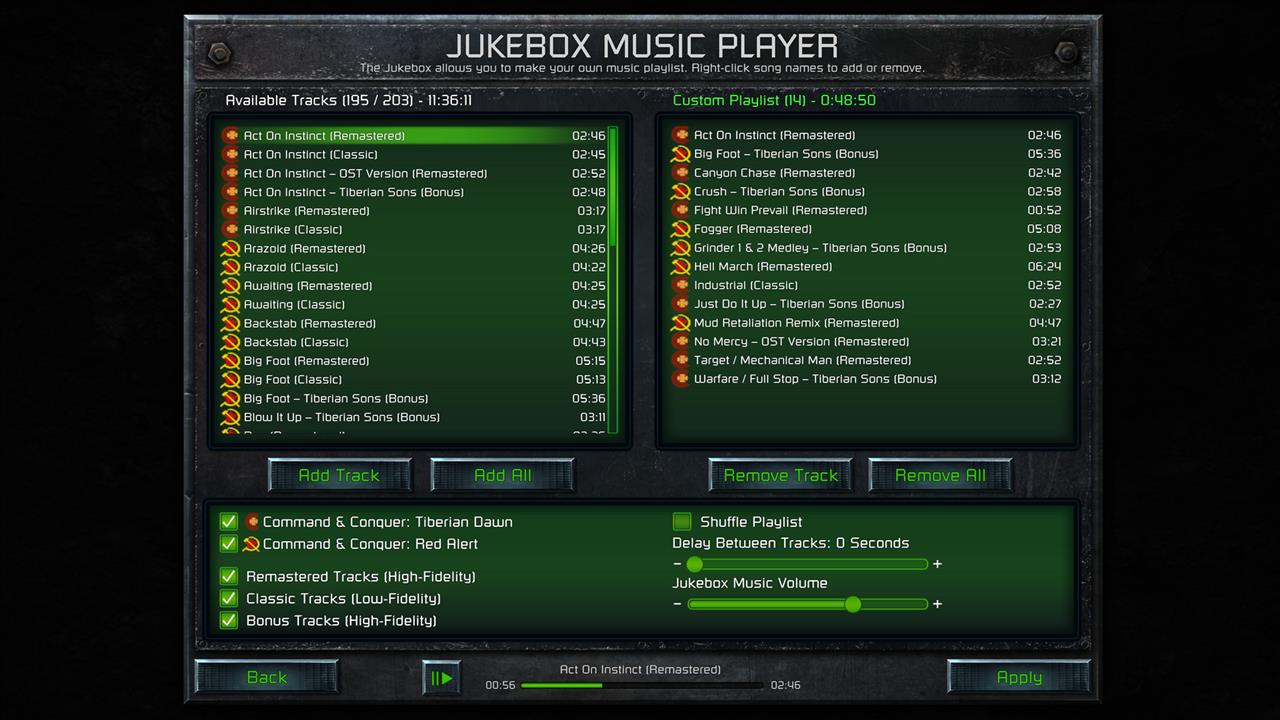 User experience is an important part of any game. In the modern era of gaming, we've seen a lot of improvements to the many facets of a game's playability. With a remaster like this, there's always the fear that the commitment to delivering a faithful reproduction will lead to the return of clunky and unwanted menus and UI. While the Command & Conquer Remastered Collection focuses heavily on maintaining its classical feel, it's clear when playing it that the game wasn't just visually revamped. Menus, settings, and almost the entirety of the gameplay experience has been streamlined to be more effective and enjoyable. A simple settings window allows you to quickly swap between legacy and modern controls, enable unit queuing, or change general game settings like game speed. Even the sidebar UI in-game was reworked to function better and avoid unnecessary scrolling.

At its core, the game just feels great to play, and that's a small detail that a lot of nearly great games miss out on. The remaster polishes almost every system, while somehow leaving the soul of the game perfectly intact. Both longtime fans and first-time commanders would do well to give this one a shot.

Most people thought this series' best days were behind it. But the Command & Conquer Remastered Collection is a well-crafted ode to a titan of the RTS genre and the community that's loved it for the better part of 25 years.