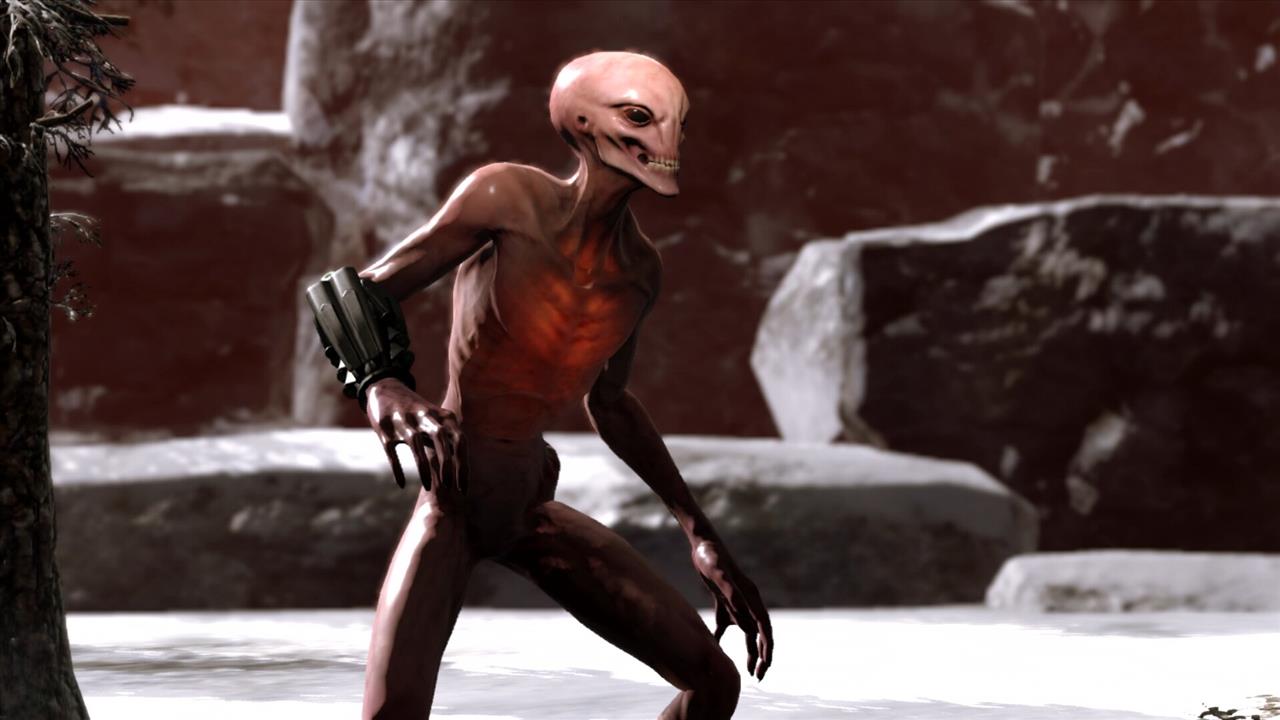 This is no less than the third time that Gaming Nexus has reviewed XCOM 2 – the fourth if you count Randy Kalista’s review of the Shen’s Last Gift DLC. We first reviewed XCOM 2 when it released as a PC exclusive in February 2016, giving it a (maybe a little low) 8.0. At that time, we said that “The improved turn-based strategy gameplay and base management are the true highlights of the sequel. The game's random nature and urge for trying new strategies will keep players coming back. The game stumbles, however, at making the series accessible to a larger audience. The overwhelming difficulty is frustrating. That may be appreciated by series fans, but doesn't welcome newcomers.” Fair, I suppose, but a little harsh.

In Randy’s review of the console version in October of that same year, he said, “If you can take punishment as well as you can dish it out, then XCOM 2 strikes the right balance. Its tactics are hardlined, its urgency is persistent, and it will wear you down even as it builds you up. A beautiful, brutal beast of a tactics game.” Citing some of the technical issues – framerates and general hitching – Randy game XCOM 2 on console an 8.8. Closer, but still a little low in my estimation. 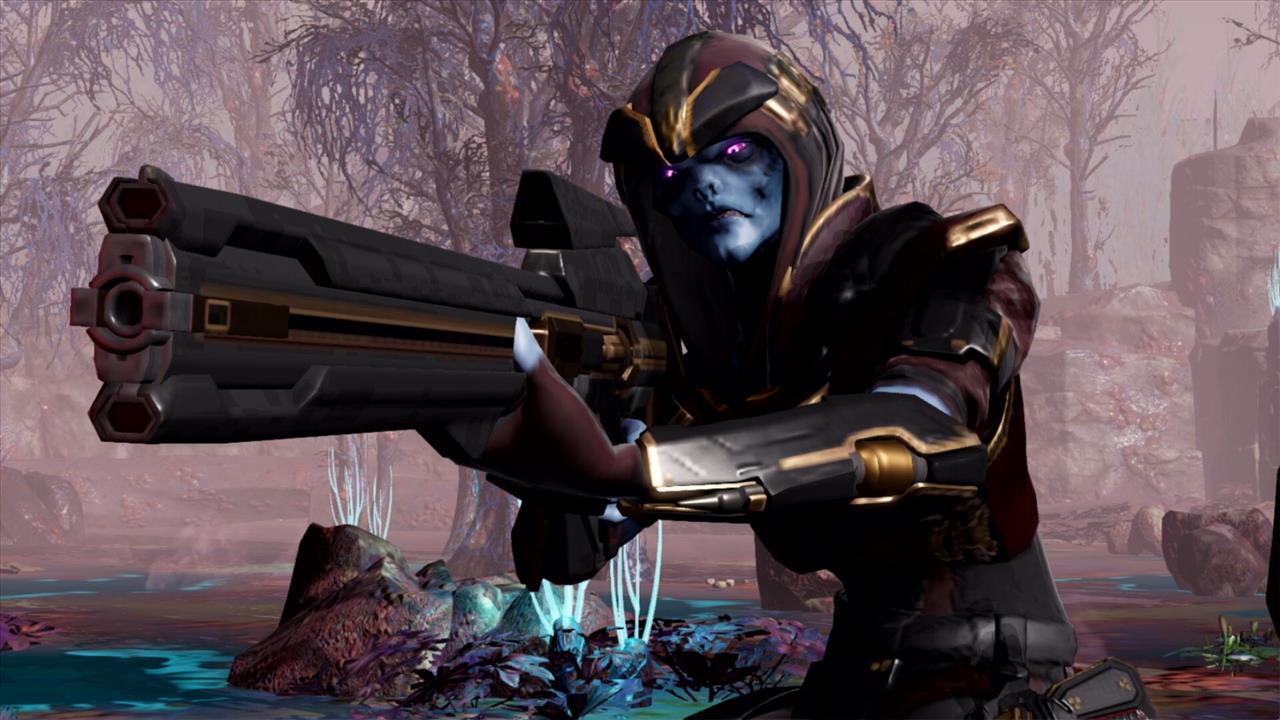 Regardless, this site’s feelings on the quality of XCOM 2 are fully on record. XCOM 2 is a fantastic follow-up to the original title, with a mountain of content and some seriously hard-fought battles. Now the game has released on Nintendo Switch, packaged with every piece of DLC content Fireaxis produced – including the extensive War of the Chosen expansion. Players can choose to play just the base game, or toggle the various DLC on at will, which are sprinkled throughout the base game.

For those few still not familiar, XCOM 2 takes place about 20 years after the original game. In a rather bleak turn, the sequel imagines that players failed in their attempts to beat back the alien invasion of the first game – not a wildly off-base supposition. Beating back the alien invasion was mad difficult. Having lost that battle, XCOM has been reduced from its status as a well-funded global defense force to something more akin to an underground cell-based resistance force. 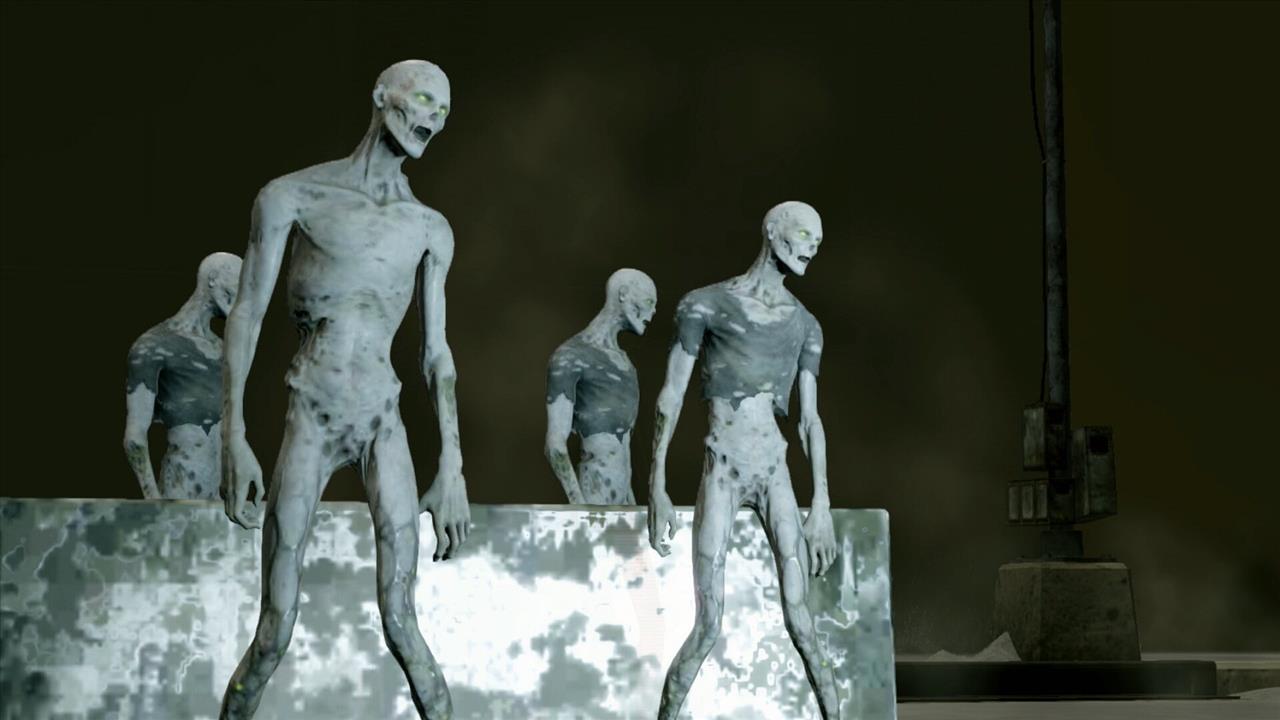 The aliens are solidly entrenched as the political and military leaders of the world. Rebranding themselves as ADVENT and firing up the propaganda machine, these aliens bring every force to bear on wiping out XCOM. As the newly resurrected/recovered commander of XCOM, the player must lead his paltry troops around the world in a series of skirmishes intended on keeping ADVENT’s nefarious schemes at bay – all while juggling things like resource management, engineering issues, and research into alien tech.

Much like the first XCOM, a great deal of time is spent in between battles fiddling with menus and setting commands for the various teams at your disposal. Managing the folks on The Avenger, your mobile base, feels very much like managing your vault in Fallout Shelter, taking almost as much of your attention as the turn-based strategy battles themselves. The flow of the game generally has players taking four of their carefully tended and easily destroyed army guys out into a fantastically exciting turn-based battle, then returning them to The Avenger for some slightly-less-exciting, but still intriguing management time – which is invariably interrupted by fires breaking out all over the place, each of which desperately needs your attention. 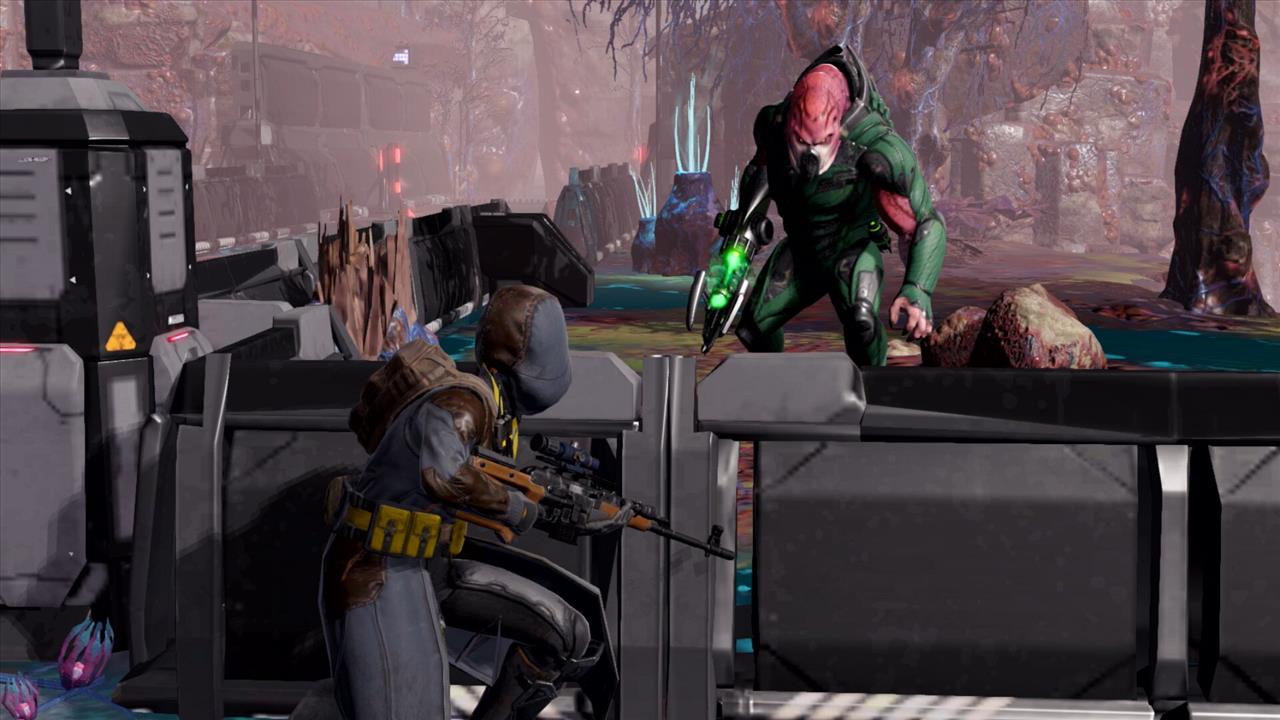 The base game of XCOM 2 is sprawling, but with all of the DLC activated the scope of the game is downright epic. Players could easily spend a hundred hours on this thing, save scumming their way through endless twists of fate and labyrinthine story beats.

So yeah, I love XCOM 2, and I’m enjoying the heck out of my current time with it. But the real question is, how does the game work on Nintendo’s handheld?

In order to answer that, it is best to keep in mind that XCOM 2 never worked all that well on a standard PS4. The game was plagued by framerate issues, weird lock-ups, and some rather questionable camera angles. All of those issues persist on the Switch, along with the added bonus of reduced resolution.

Don’t get me wrong, it’s impressive that this thing is running at all. But XCOM fans must remember that getting a game that struggled to run on current gen consoles to perform on Nintendo’s glorified Android tablet required some pretty major concessions to be made.

The visuals take the biggest hit, of course. Outside of the rather nice looking cutscenes, XCOM 2 on the Switch best resembles a well-made early PS3 title. It isn’t ugly, but it is blurry at times, and if you play in handheld mode, you will find yourself squinting to read the tiny fonts that are used in menus.

Framerate issues abound, especially during the little scenes that show your team deploying on missions. Yes, each custom character you have created is present in these scenes, but the cost of that customization is that the Switch chugs awfully hard to place them into those moments. Load times can be excruciating, but if that’s what it takes to get a game this advanced running on a handheld system, so be it. 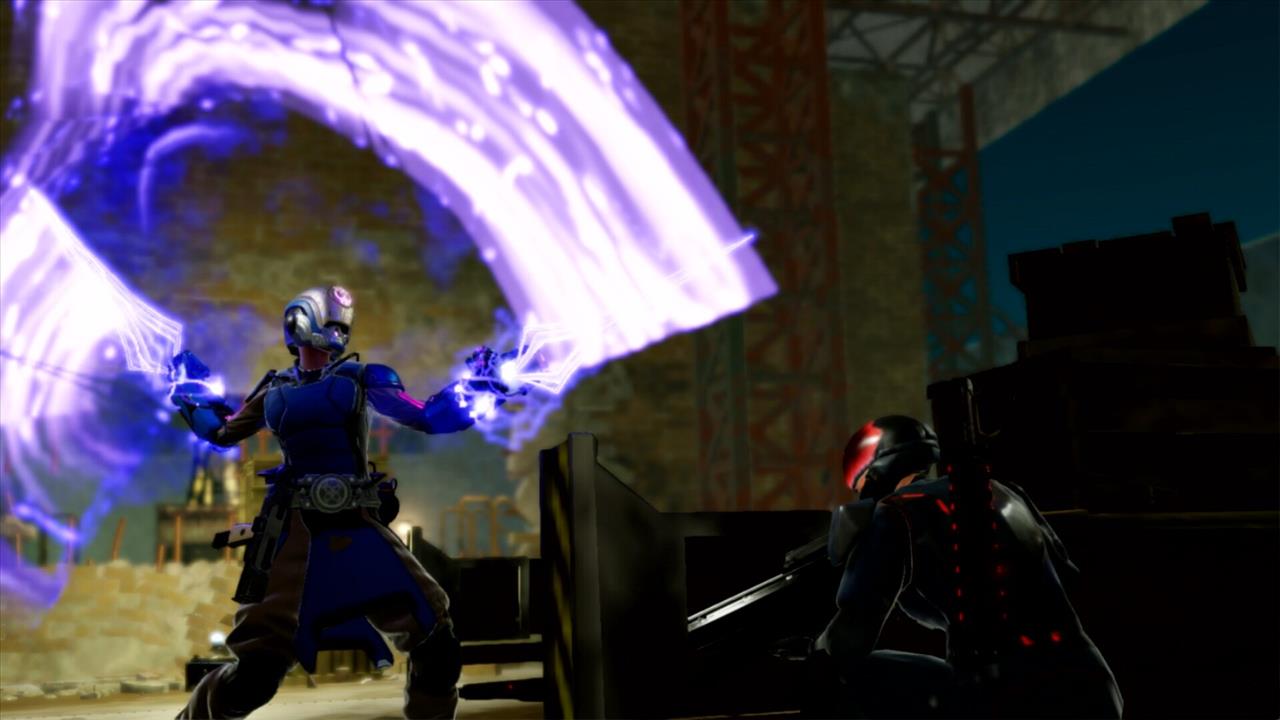 The Switch controls all work just fine, outside of a bit of fiddliness required at times while choosing the correct tile for your soldiers’ destinations. And getting into the flow of various menus can be a bit challenging with a game this complex. But for the most part, XCOM 2 can be played on two Joycons fairly well.

Perhaps more troubling (but not surprising), the camera problems from earlier console releases persist. At times, the camera simply doesn’t want to look anywhere interesting, instead focusing on random walls and floors while the action plays out on the other side of the room - particularly during moments when the game is chugging away, trying to figure out what all those alien enemies should do. Firaxis games have always traditionally slowed down a bit when the action gets overly complicated, so the CPU can have time to grind through millions of calculations to figure out a brilliant new way that your enemies can stick it to you. XCOM 2 is no exception, but the fact that the game chooses to focus on a blank wall while it does its thinking is a new twist.

But really, none of those issues matter all that much. XCOM 2 is a ludicrously good game, and with all of the add on content, it is insanely large. Sure, you have some technical hiccups when you squeeze it down onto a handheld, but that still leaves you with a viable way to play XCOM 2 on a handheld. Not to be hyperbolic, but this game is so good that I’ll take the hit in resolution and the weird camera and framerate issues just to be able to play it on the go. XCOM 2 is a fantastic game, and while the Switch might not be the very best way to play it, if it’s the only option, it’ll work.

XCOM 2 is, at five years old, a stone cold classic. The XCOM 2 Collection on the Switch may have some technical issues, with framerate and resolution being the most prevalent, but having the ability to play this amazing title on the go far outweighs any problems you might experience. Let's be real; you aren't playing XCOM 2 for the graphics anyhow. All of the strategy, depth and fun is accounted for here. Highly recommended.