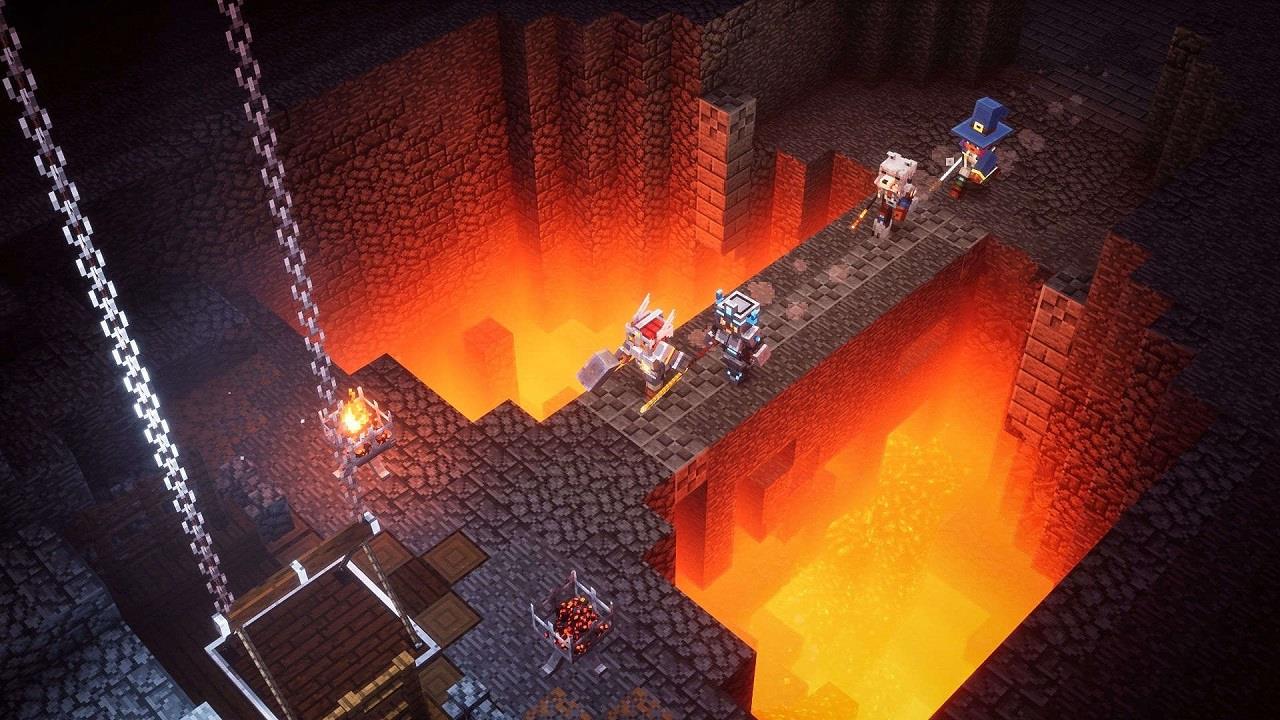 Written by Sean Colleli on 6/16/2020 for PC
More On: Minecraft Dungeons

I wouldn’t say Minecraft is one of my favorite games of all time, but it’s one of the few that I appreciate the most. Outside of recognizing its staggering importance to the landscape of gaming culture and development, Minecraft has also been there for me for a long time. I was there for the second public alpha, then called Indev, and purchased early access to the promised launch version shortly thereafter. I stayed in touch with long-distance friends using the game’s burgeoning multiplayer scene. I was tempted into the MineTrek server by the stunning work some dedicated fans did to recreate Star Trek starships with Minecraft blocks, and spent years roaming the corridors of the Enterprise, Voyager and Defiant. Minecraft even helped me through a bad breakup; while other friends indulged in substance abuse or Facebook drama to distract from their heartache, I threw myself into constructing a scale Dyson’s Sphere in Minecraft’s creative mode. Not the healthiest of outlets, but the peace and quiet of Minecraft’s infinite worlds, and the subtle encouragement for my mind to wander and create, made it my Zen garden and helped me work through some confusing emotions.

At the time of its creation, Minecraft was unlike anything else. It was and continues to be difficult to monetize or turn into a nickel-and-dime service, outside of multiplatform releases and the endless merchandising of course. It is not really a game you can win; showing off to your friends doesn’t require buying expensive skins or pimped out castles, but rather creating your own. There is no inherent competitive element to monetize. That said, I was frankly a little terrified when Minecraft’s creator Marcus “Notch” Persson sold Mojang Studios to Microsoft in 2014, but thankfully Microsoft has let Mojang pretty much do their own thing, and they preserved the vision and purity of Minecraft without saddling it with superfluous microtransactions or pay-to-win schemes.

Of course Microsoft has tried to build upon the Minecraft brand with spinoffs, specifically the Telltale Games Minecraft Story Mode episodic point-and-click adventure, and now the Mojang-developed Minecraft Dungeons, a hack n’ slash dungeon crawling action RPG. I’ve been playing the latter for a couple weeks now, and while it’s difficult to find any major faults in this very competent little spinoff game, it’s also hard to find any real justification for its existence. 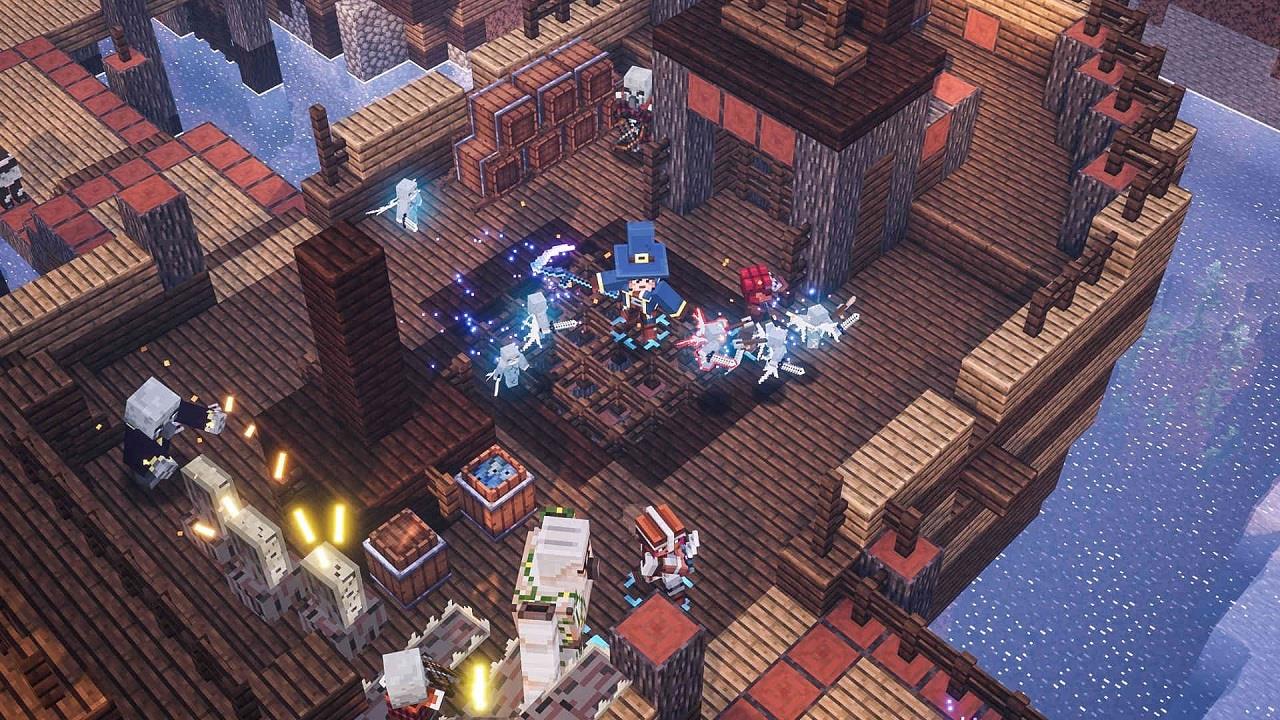 Minecraft Dungeons is a fairly typical Diablo clone. The story is straightforward: one of Minecraft’s “caveman Squidward” villagers, this one named Archie, becomes an outcast with no friends. He discovers an artifact called the Orb of Dominance: basically the Minecraft equivalent of the One Ring. It gives him the ability to conjure and control monsters, but twists his mind into an alter-ego called the Arch-Illager. You and your multiplayer friends play as heroes called upon to save the local villagers from this new menace. The story is spoon-fed through a linear series of cutscenes, narrated by a woman with the intimidating gravity befitting a high fantasy epic, that honestly feels out of place in Minecraft.

Minecraft Dungeons can be played solo or with up to three friends in local and online drop-in co-op. It is played from an isometric perspective, in procedurally generated levels that contain randomized, leveled loot. There are no set classes in the game so you can specialize or jack-of-all trades as you see fit, using any weapons, armor or special perks that you like. As in regular Minecraft you have access to both melee and ranged bow-and-arrow attacks, with different weapons, modifiers and enchantments for each. As you gain XP and level up you earn enchantment points, which can be spent on any weapon or armor to unlock up to three tiers of stat perks. 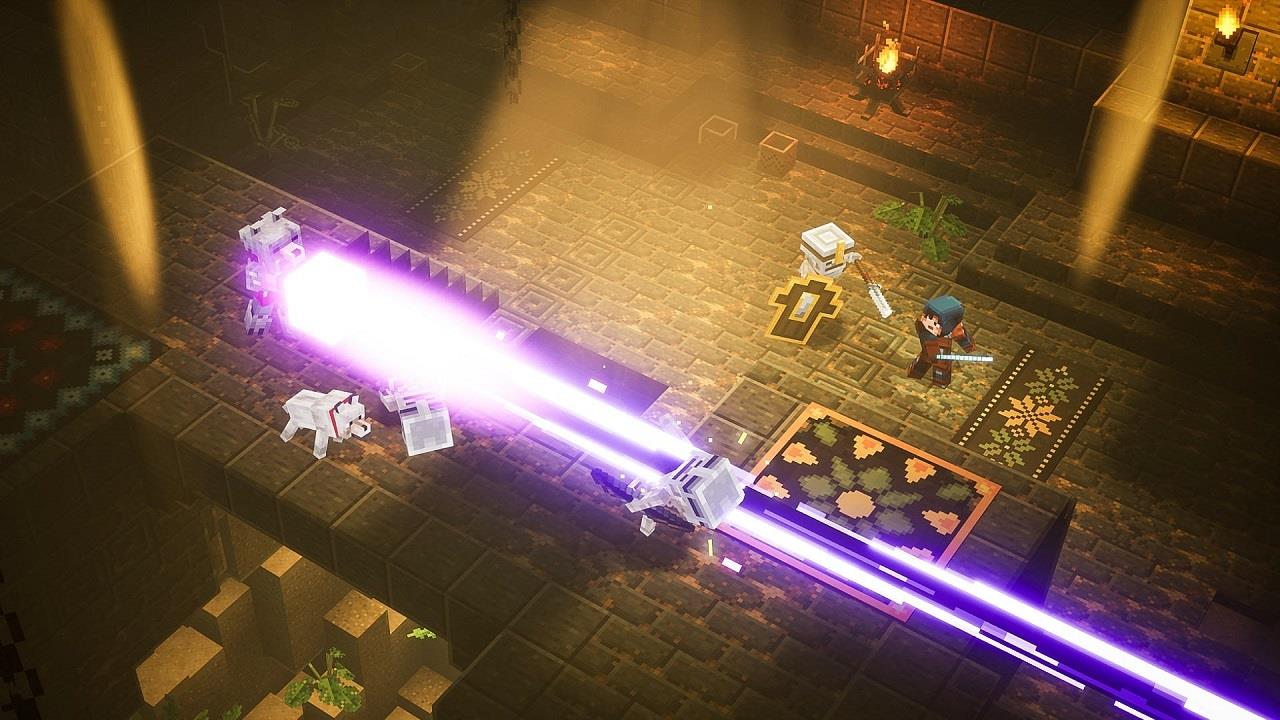 This lets you do things like equip a cutlass that calls down lightning, a bow that ricochets between targets, or a wolf suit that has a chance to sap enemy health and restore your HP. You can also equip up to three artifacts for special attacks; these include fire or explosive arrows, a devastating directed energy beam, or my personal favorite, a meaty bone that summons a friendly wolf to fight alongside you. Some of these special attacks and weapons have basic cooldowns, but others are powered by the souls of enemy mobs, which you collect from any mob that you’ve slain. You also have an always-equipped basic HP potion, with its own somewhat-too-long cooldown period. Honestly the variety of weapons, items and special attacks is the most entertaining aspect of Minecraft Dungeons. It adds much-needed variety and craziness to an otherwise pretty bland dungeon crawler, and if you have a four-person team all setting off fireworks, lightning and summoning helpful creatures it creates a very lively gameplay experience.

The main issue with Minecraft Dungeons is that for all its competence, it’s also kind of rote and bland. Mojang have nailed the art style, visual variety, sound design and general, subtle cuteness of Minecraft in this spinoff, but I’d expect nothing less from Minecraft’s original creators. Rather, the uniquely creative aspects of Minecraft are almost completely absent. Each level is pretty similar to the next, and there is very little interaction you can do with the environment. I’d be cooking along, slashing my way through a map, but I would keep forgetting that no, I can’t alter the terrain, I can’t build a barrier, I can’t pull out my crafting table to make a sharper sword or some diamond armor. I had to take what the game provided, and outside of some loot diversions off the beaten path, there wasn’t much to do besides push forward, kill mobs, defeat the occasional boss, and do the same thing in the next level. 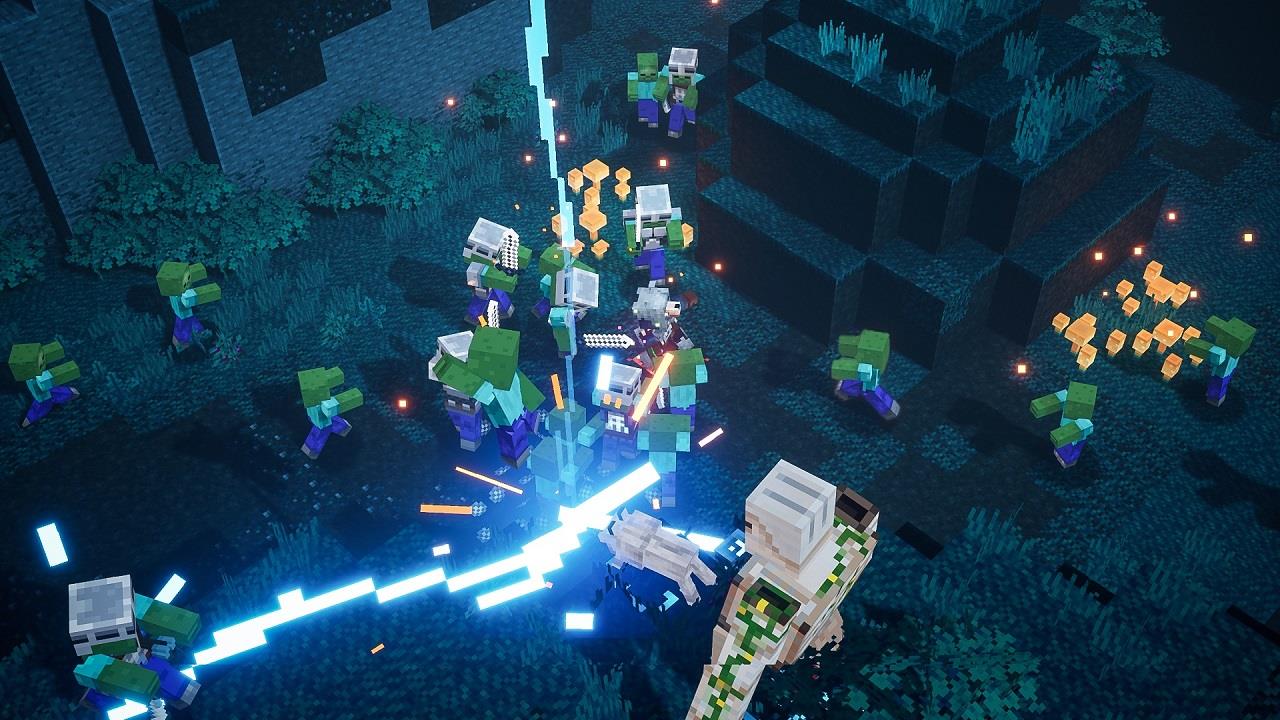 Minecraft Dungeons does add some cool new enemies, especially of the magic variety; there are huge shamans that summon enemies, all manner of new armored undead and skeletons, and some pretty exciting and challenging bosses. But every time I ran into one of these guys, I was just reminded that I wanted to see them show up in the real Minecraft, and how I’d much rather be playing that. There isn’t anything inherently wrong with Minecraft Dungeons, but it contains only the superficial aspects of its inspiring game and dispenses with everything that makes Minecraft so special and unique.

I only have a couple of actual complaints with the game’s technical aspects. First of all, as far as I could ascertain, you can’t pause it. Even in offline mode the game assumes you’ll have friends dropping in at any time, so it behaves like an online game. If you need to shoo the cat off the entertainment stand or go see what your wife wants, you have to clear out all nearby hostile mobs and go find a safe, quiet place to hide out. On a more gameplay related note, this also means that you can’t stop to manage your inventory to quick-swap weapons, perks or special attacks. What you have equipped when you enter a battle is what you’re stuck with, unless you retreat quite a ways to regroup. You also can’t save and quit a level at a checkpoint or any other kind of save. You need to play through a level start to finish, and if you lose all of your lives, you need to replay from the beginning. This is annoying, considering how long many of these levels are, and how repetitive and tedious the gameplay already is. 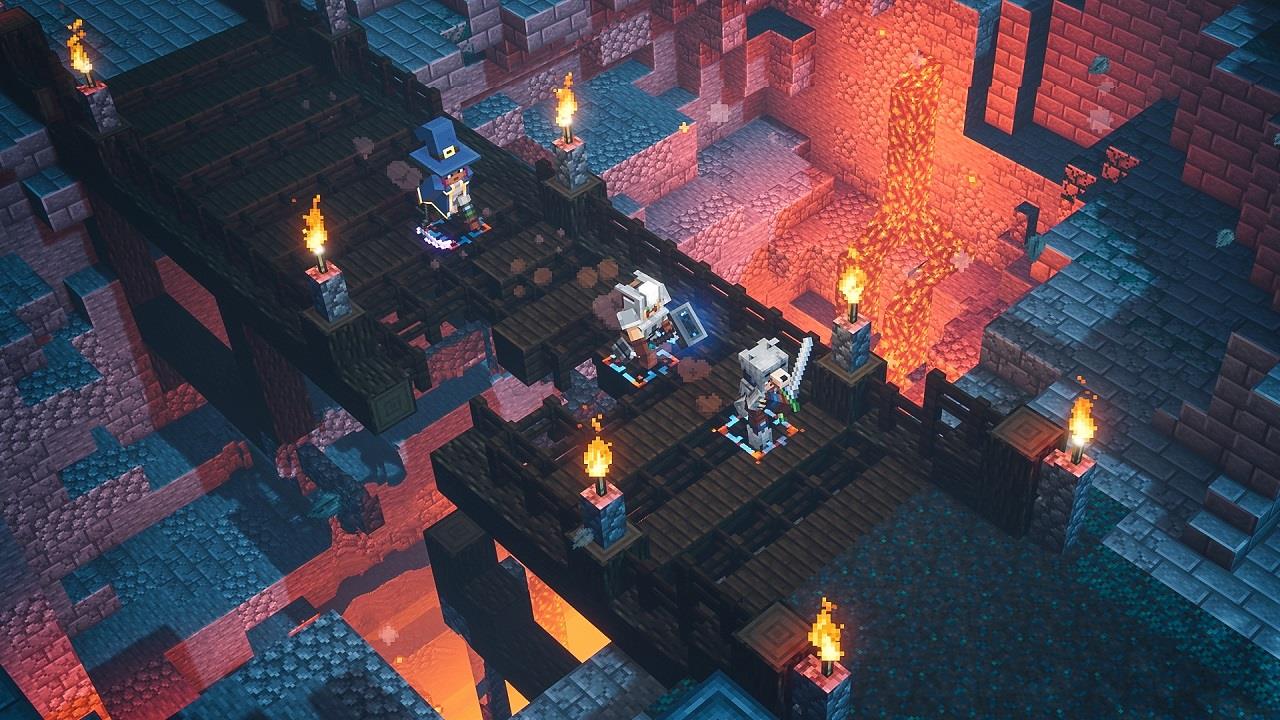 My only other complaint is with the default controls. I’m playing on PC, and luckily I had a wired Xbox 360 controller sitting around, because the keyboard and mouse controls are abysmal. On a gamepad you move your character with the left stick and attack with face buttons and triggers, but with keyboard and mouse, you move by clicking where you want to go, or on which enemy you want to attack. I’m not sure if you can rebind these controls because I couldn’t divine how to, but they are an absolute bear and I would imagine borderline unusable as the game throws bigger groups of mobs at you.

At the end of the day I really wonder who Minecraft Dungeons is for. Maybe it’s for younger, less discerning players who are just obsessed with the brand and must have everything related to it, like my nine-year-old nephew who would not shut up about Minecraft Story Mode. But for long-time fans of Minecraft, people who grew up with the original game, there isn’t a whole lot here to hold their attention. Minecraft Dungeons is pretty short, and while I know Mojang wanted to make the dungeon crawler genre more accessible with this game, they may have made it a bit too straightforward. There are no glaring shortcomings or flaws in Minecraft Dungeons, but it’s lacking a hook, and just reminds me of the much richer game it came from. It’s a bit like eating Star Wars fruit snacks, or Spider-Man cereal. Tasty and filling yes, but not terribly nutritious and an altogether different experience than the movie or comic book I really wanted in the first place.

Minecraft Dungeons is a competent hack n' slash RPG; nothing more, nothing less. It has the outward charm of the creative masterpiece that inspired it, but very little depth. What is here is fun for a time in solo or co-op, but don't expect it to hold your attention long-term.