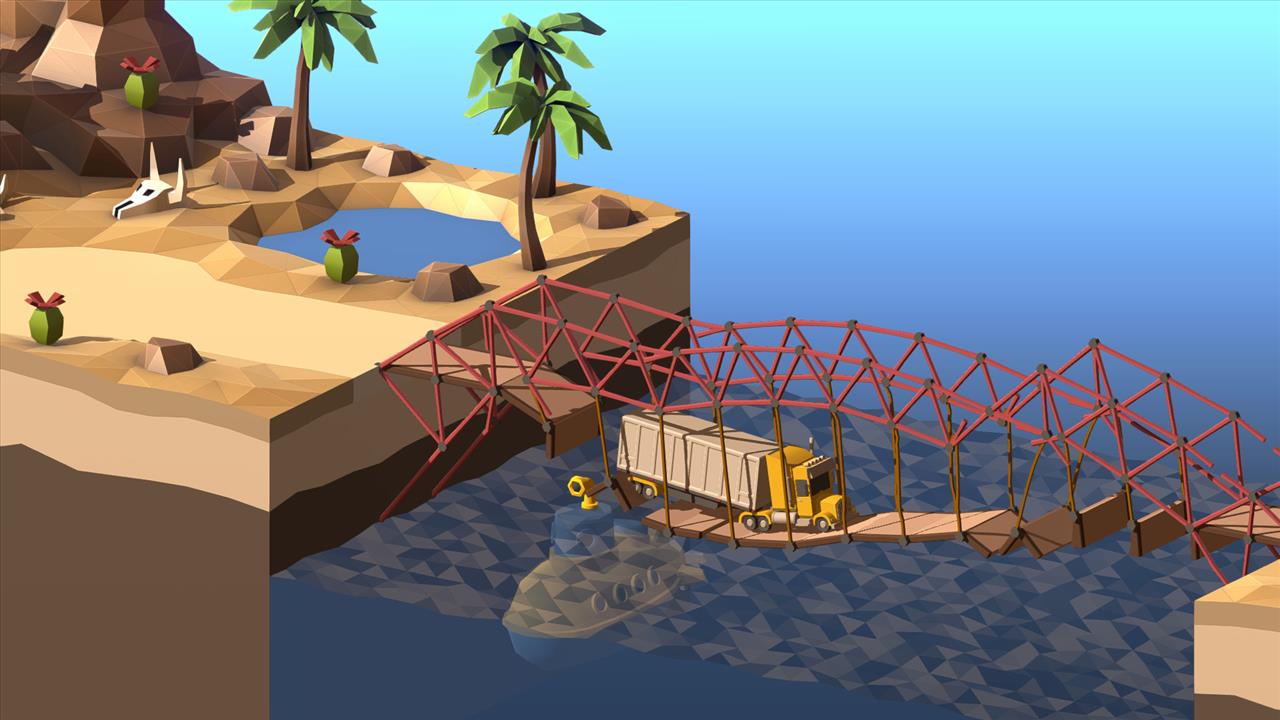 When it comes to creating something, you can usually split the project into two major processes: designing and developing. With programming, for example, there’s the process of designing the application, such as a video game, and then you have a team actually developing the application by writing the code. Architecture is similar to an extent where you have to design what you’re building and then a team with the proper skills will develop what is being built. I’ve always seen myself as more of a developer when it comes to my programming expertise; I’m better at developing something as opposed to visually designing a program. That said, I got the opportunity to check out Poly Bridge 2 on Steam to see how well I can design and develop bridges. This should be very interesting.

Poly Bridge 2 gives you a few ways to play out of the gate: Worlds, Workshop, and Sandbox. Newer players will want to hit up the Worlds option first as it’s pretty much the campaign of the game, plus it includes a couple of tutorials for basic bridge construction as well as how hydraulics work. There are over 60 levels to complete and each has basically the same goal: get any vehicles from point A to point B safely by building a bridge or bridges, depending on the level, occasionally making sure any checkpoints are hit and that your bridge can both support the weight of the vehicles that cross them. You have to further account for the passage of ships and the like without completely destroying them. It’s not as simple as just building a road and that’s it; you do have to take physics into account. After all, a bridge without anything supporting it will just collapse immediately.

The early levels are a good way to get your feet wet—and preferably not the vehicles'—in bridge building and how bridge physics work. Placing and removing parts is pretty simple and snap into place on the grid. You can freely test out your bridge while you’re making it at any time and you won’t be penalized if it breaks. Basically you can test it as many times as you wish until you’re successful. You’re free to use any of the materials in any way you wish as often as you like unless the stage puts a limit on specific parts. If you’re not sure how exactly a part will work, feel free to place it where you think it should go, then test it out. The good news is if you ever get stuck on a stage you can just move onto the next one. When playing Worlds you can actually choose from any of the 60+ available stages in any order you wish. You don’t have to complete one to progress to the next. In fact, the only requirement to “clear” a level is to just get the cars safely to their final destinations. 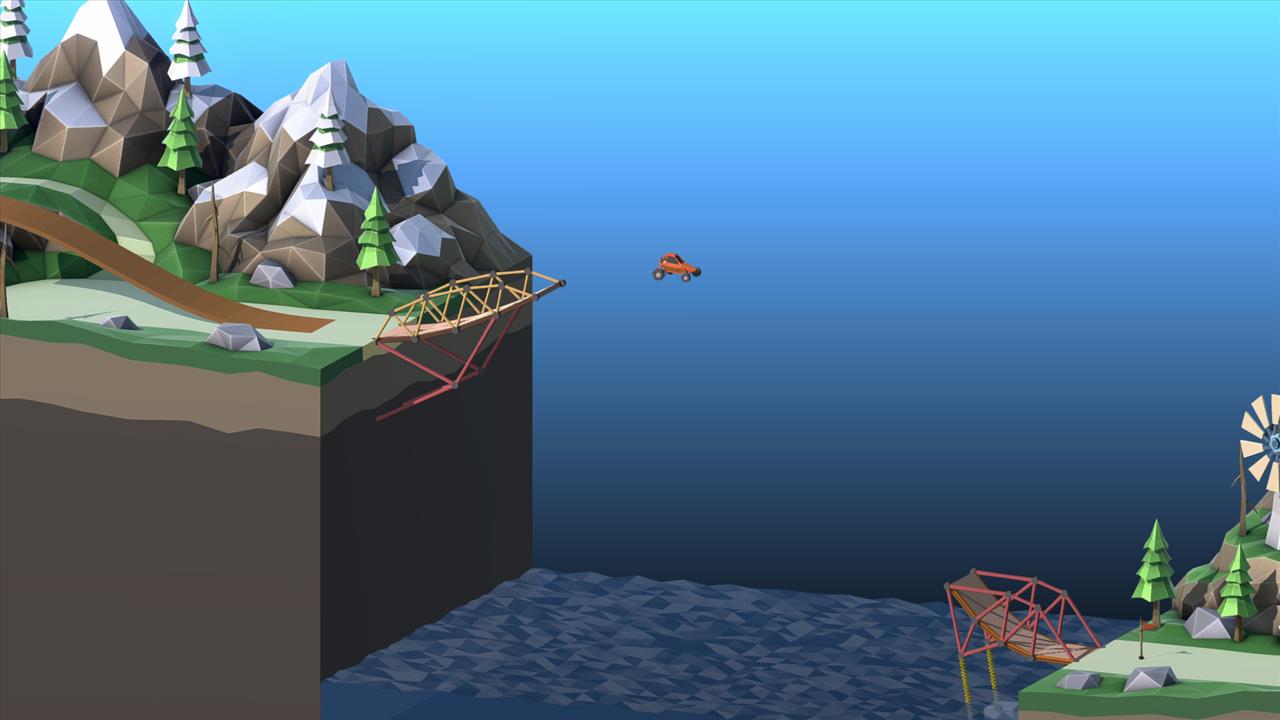 When completing a bridge you actually have three different goals you can achieve: complete the level by having all vehicles get across safely, have the bridge stay intact the entire time, and complete it under budget. Each level has a budget with each bridge part having a set price. Getting under budget in the later levels is a pretty nice challenge, especially when you’re almost there and have to just cut a piece here and there while making sure the bridge stays intact. Later levels will really test your building and budgeting skills as you work in hydraulics and even launching vehicles off of ramps to hopefully land safely on the other side. As for the third goal, it is possible for the stress a vehicle can put on the bridge make the bridge break after you’ve passed it. For the third goal to count, the bridge has to hold up for the entire test, even after the vehicles have passed over it. Getting all three goals at the same time on later levels definitely provides a bit of a challenge.

As I’ve never played the original Poly Bridge prior to this review, one thing I really enjoy with Poly Bridge 2 is just how casual it can be. A lot of games are fast-paced action games or shooters where you have to think on your feet and react quickly to certain situations. Poly Bridge 2 has no time limits, no stress, no order to do things in. You can do basically anything however you wish, whenever you wish, and with few constraints. You can start out slowly making monstrosities of bridges, then as your skills improve you can start finding ways to improve on your original designs, and you can do all of it at your own pace. It does take some time to understand some of the physics involved as I’ve had numerous times where I’ve tested a bridge, it broke somewhere, and I’m left scratching my head as to how it broke. The hydraulics also took a few uses to start understanding how they function. Even as I’m writing this I’m still not 100% confident in using them properly. Basically a lot of the bridge building here is trial and error, but you have unlimited trials to correct those errors. 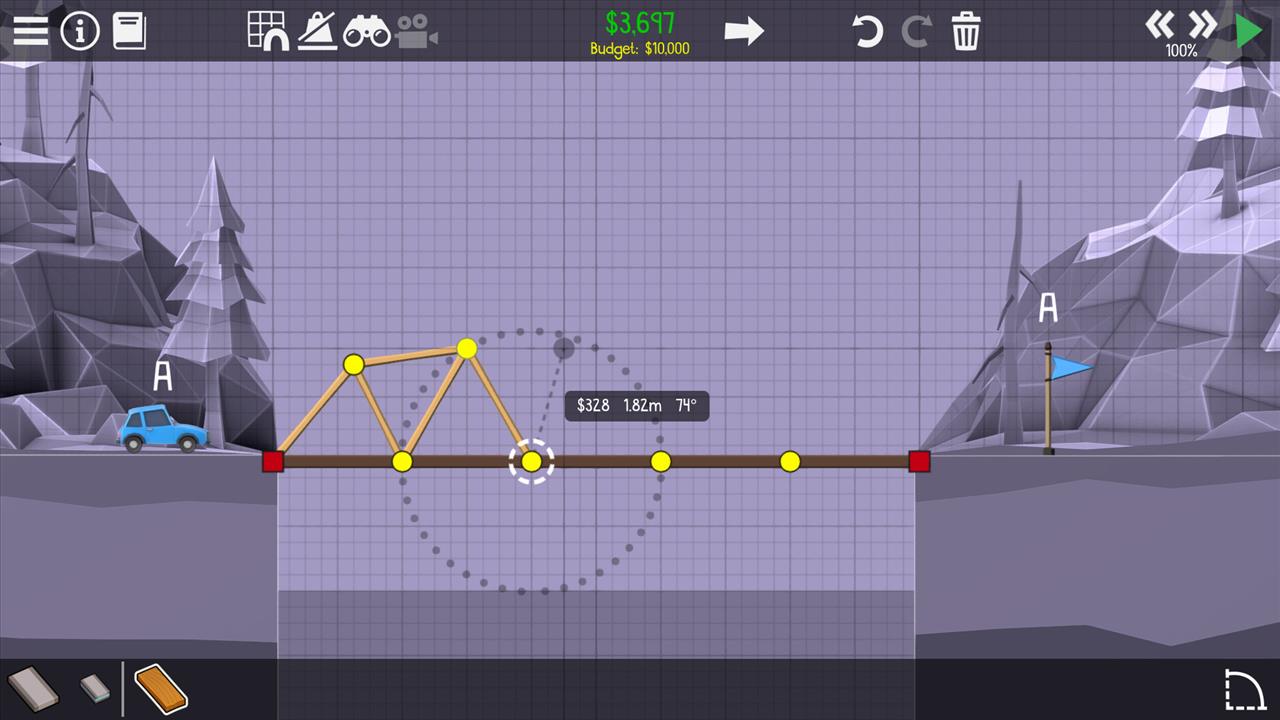 For those who wish to create their own levels for others to check out, the Sandbox mode lets you design a level yourself. The editor gives some options for how you wish your level to look, what vehicles you wish to use, and you can then design a bridge to see how your level plays out. You can adjust the budget, the background, and pretty much anything you wish within reason. If you’d like to create an entire campaign, head over to the Workshop. Here you can take the levels you’ve created and add them to your own custom campaign, or check out campaigns that other players have created. Finally, the Gallery mode is a great place to go to if you’re stuck on a particular level. Remember, you can do any level in any order and at a minimum just need to successfully get each vehicle to its final destination, but the Gallery is great for seeing how other players have cleared each level to get an idea for yourself about where to start or how to cut down on your expenses. Granted this does make things a lot easier, but again, it’s not like you have to clear one stage to move onto the next; everything is already unlocked.

Going into Poly Bridge 2, I wasn’t sure what to really expect. After spending some time with it I can say I really enjoyed it a lot more than I thought I would. That being said, while I do like how casual the game is, there’s no real feeling of progression. What I mean is, maybe have it to where you do have to unlock each stage as you go, or at least only have one world open at a time, and at minimum you have to at least “clear” each stage. Maybe also make it so you can’t look up a level in the Gallery until you’ve cleared it at least once. That way there would be some sort of progression system. I’ve also had quite a few times where a bridge will break and I couldn’t figure out why, or some mechanic would fail and I’m scratching my head thinking everything looked correct. While some things are explained via a tutorial or two, others you kind of have to figure out on your own. That’s fine in a way because you have unlimited tries to build your bridge, but I’d rather know why my bridge failed instead of using trial and error to figure out why it failed. 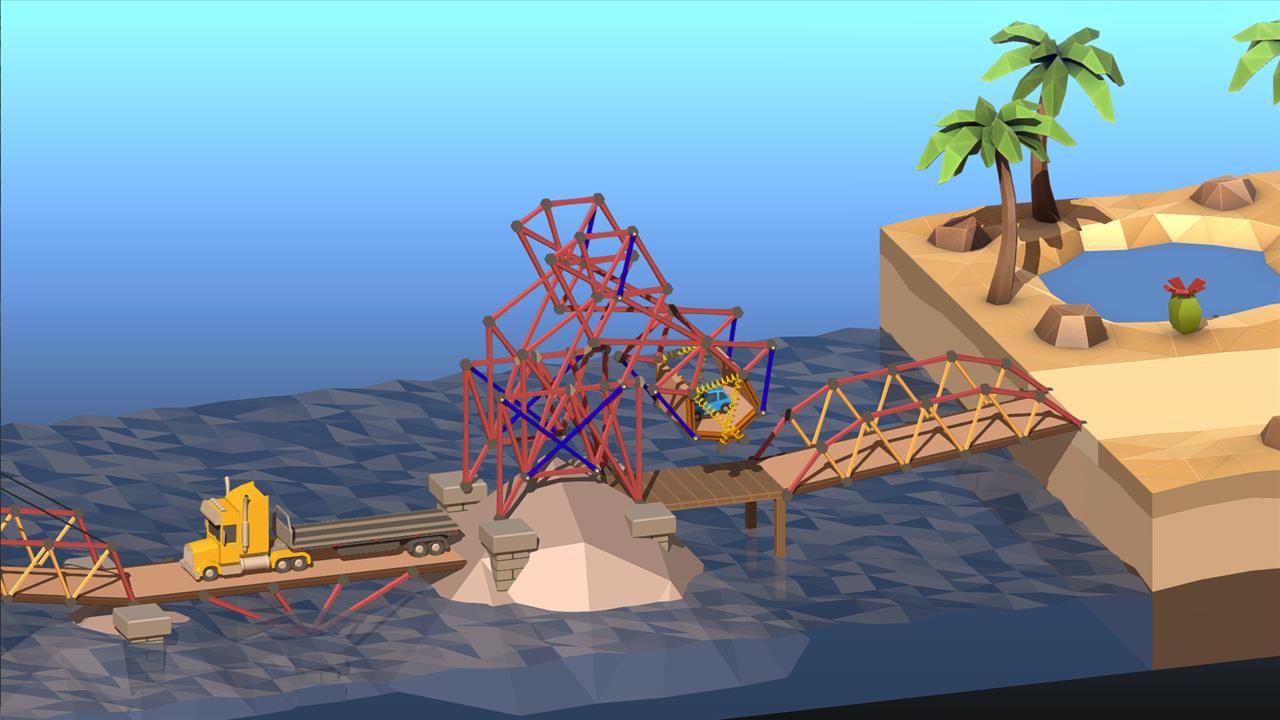 As it is, though, Poly Bridge 2 is very enjoyable and can bring some levels of satisfaction when you finally finish a bridge under budget and without it breaking at any point. It’s a very casual and relaxing game that doesn’t rush you in any way. I’m not going to lie, the game gets a laugh out of me every now and then when my bridge breaks and the driver of the vehicle just drives into the water anyway. Everything looks great from a visual standpoint. While there's no progression system with everything open from the start, there's still a challenge aspect as long as you don't view the Gallery before completing a level. It does take some time to get the hang of the physics, and you might wonder a few times how your bridge broke. Being able to take on any level at any time means you can play a level or two if you're short on time. Plus the music is nice and relaxing for a game that will see vehicles driving into the water on a regular basis.

If you're looking for a relaxing way to pass the time and improve your architectural skills, Poly Bridge 2 is worth checking out.