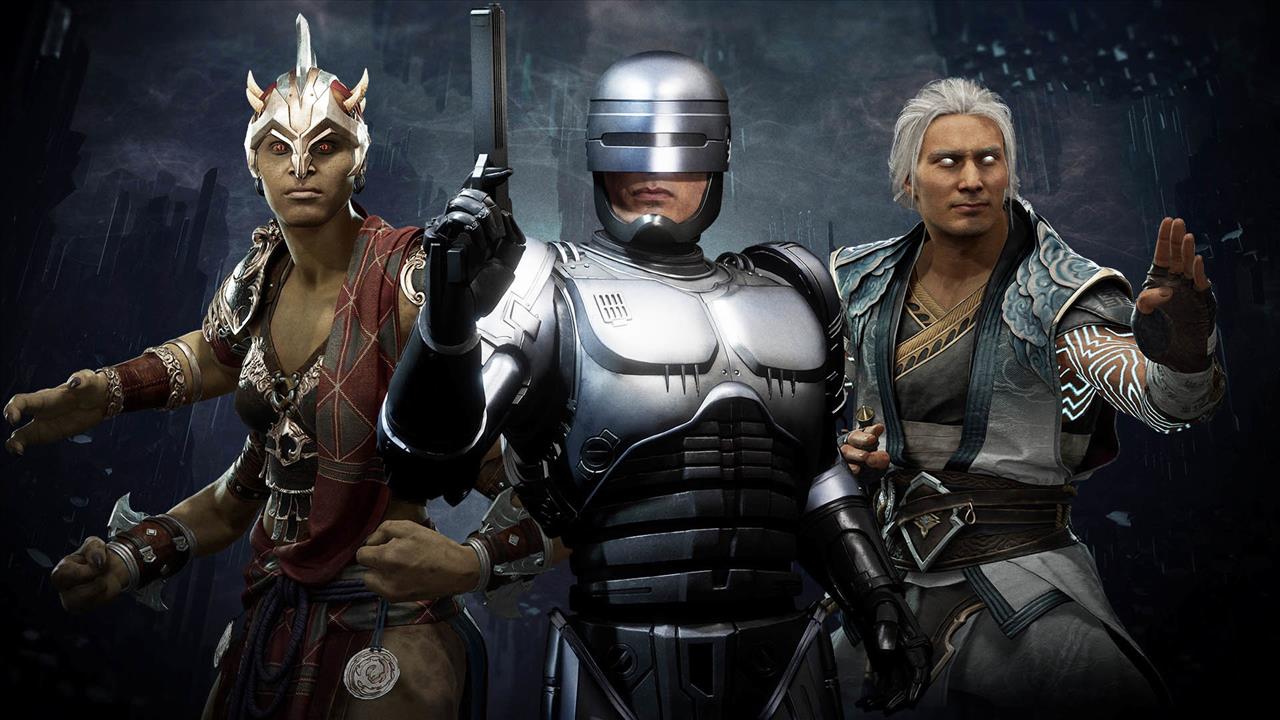 Mortal Kombat 11 was already a pretty feature complete game for the past year of its release and even got a season pass of DLC fighters for the game as well. The game got even bigger recently as Mortal Kombat 11: Aftermath was released. It's basically an expansion pack to the game that adds a story expansion, new stages, new characters, Friendships and balance changes. Taken as a whole this is a lot of content, all of it good, but the price of the game without the ability to buy things separately slightly hampers the experience.

The original Mortal Kombat 11 story pretty much ended up on a cliffhanger with Liu Kang defeating Kronika, but she managed to rewind all the way back to the beginning of time before her defeat. Now Liu Kang with Raiden's powers is now in charge of creating a new future for everyone. The Aftermath story expansion picks up immediately after with Shang Tsung, Nightwolf and Fujin appearing through a portal and telling Liu Kang that he cannot rewrite history until they get Kronika's crown.

The new story expansion focuses mainly on the DLC characters, which is awesome, since NetherRealm's previous games didn't involve the DLC characters in the story at all. Now we get to see more of the Mortal Kombat 11 story while also being able to play as Shang Tsung, Sheeva, Sindel, Nightwolf and Fujin. The story expansion lasts five chapters, which may seem small, but some of these chapters are incredibly lengthy. Personally I enjoyed this story a lot more than the original one. When it was all said and done, Aftermath provides something that was definitely missing from the original story, and that is closure and a glimpse into what could be coming with Mortal Kombat 12. 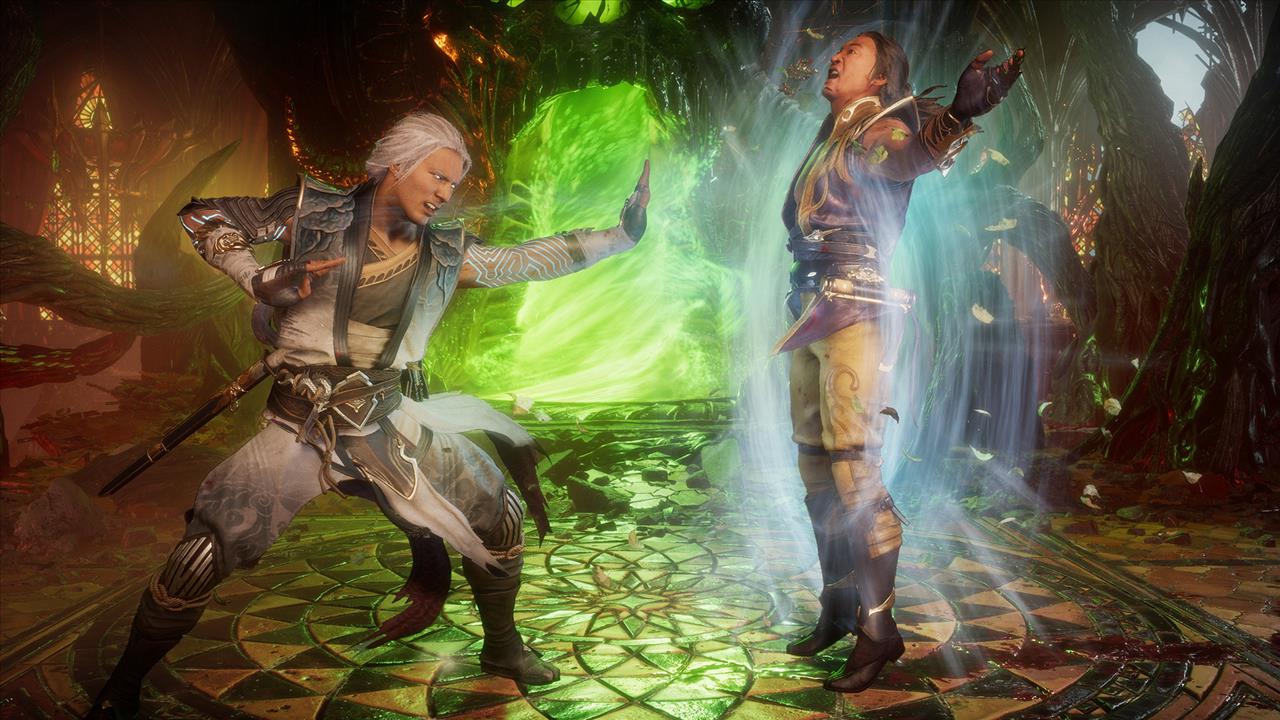 The star of the story mode, without a doubt, is Cary Hiruki Togawa who played Shang Tsung in the 1995 Mortal Kombat movie. Cary reprises his role here as the soul-stealing sorcerer—and man did this guy not miss a step whatsoever. I would put Cary Togawa's Shang Tsung up there with Kiefer Sutherland as Jack Bauer or Hugh Jackman as Wolverine. An actor that completely becomes the character and we don't see the actor anymore, just the character. Cary isn't playing Shang Tsung, he is Shang Tsung and completely owns the role. Most of the tension throughout the story will be the player asking themselves when Shang Tsung will betray everyone, and Cary does a fantastic job with his dialogue and his scene-stealing grin making you wonder whose side he is on.

The two new Mortal Kombat fighters are fine additions to the roster. Fujin is a character that hasn't been seen in over 10 years as his last playable appearance was Mortal Kombat: Armageddon. That game featured every current MK fighter at the time, so if you don't count that game it would have been Mortal Kombat 4 back in the '90s. Fujin is interesting. He is insanely fast with his wind attacks and combos, some of which can almost push the opponent from one end of a stage to the other. He also has an awesome air dash where he walks through the air and can perform additional attacks. 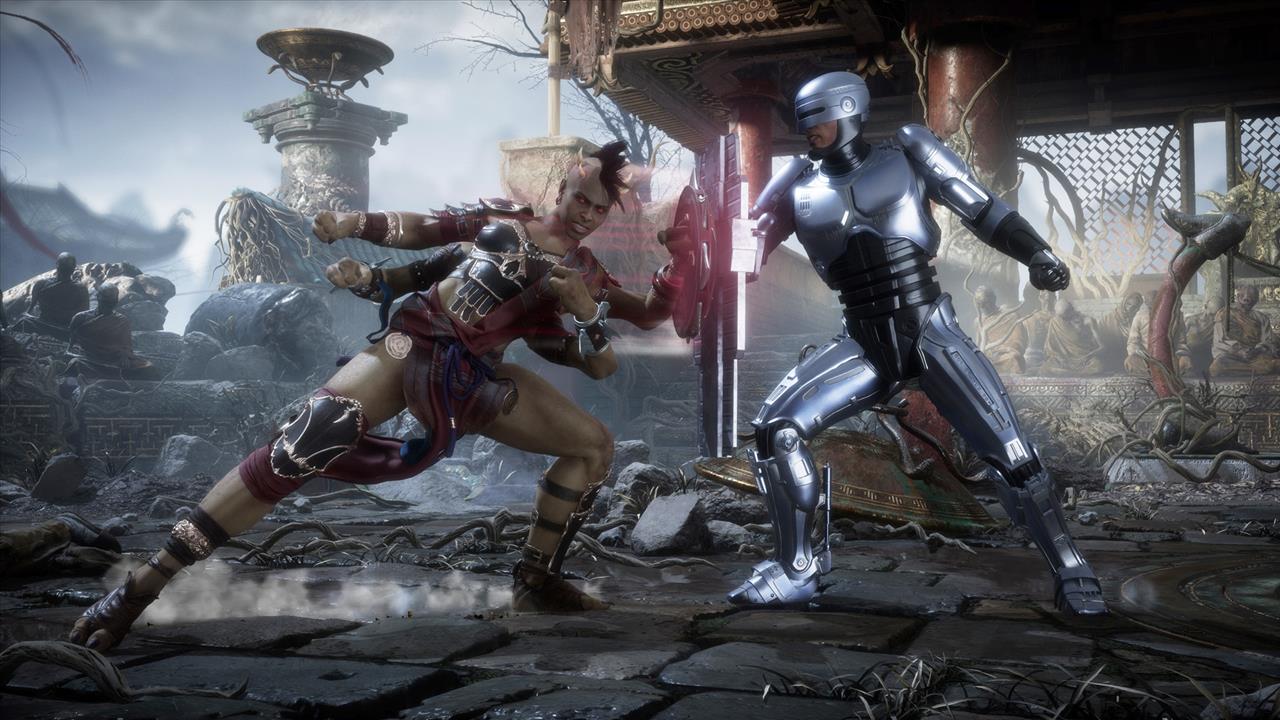 Sheeva is a pure grappling powerhouse complete with tons of grabs and the signature Shokan air drop attack. She also has a cool move where she can launch a fireball out of each of her four arms. This is actually a stance she takes where she can't move. The fireballs appear in her hands and you use the square, X, triangle and circle buttons to launch the fireballs one at a time.

Robocop, the titular character from the '80s action movies, arrives on the scene and is even voiced by Peter Weller who also shares his likeness for the character. Robocop's only problem is that Mortal Kombat 11 already has a ton of military characters. Between Sonya, Jax, Cassie Cage, Jacqui Briggs, and even the Terminator who was added as DLC, Robocop has a been there, done that kind of feel to him. Most of his moves involve guns and grenades. That said, he's still fun to play and it's fun seeing him face off the MK cast with his 80's action movie colleague the Terminator. His "Apprehended" win pose is amazing, and it will never not be funny seeing Robocop placing Shao Kahn or Sheeva or the rest of the MK cast under arrest. 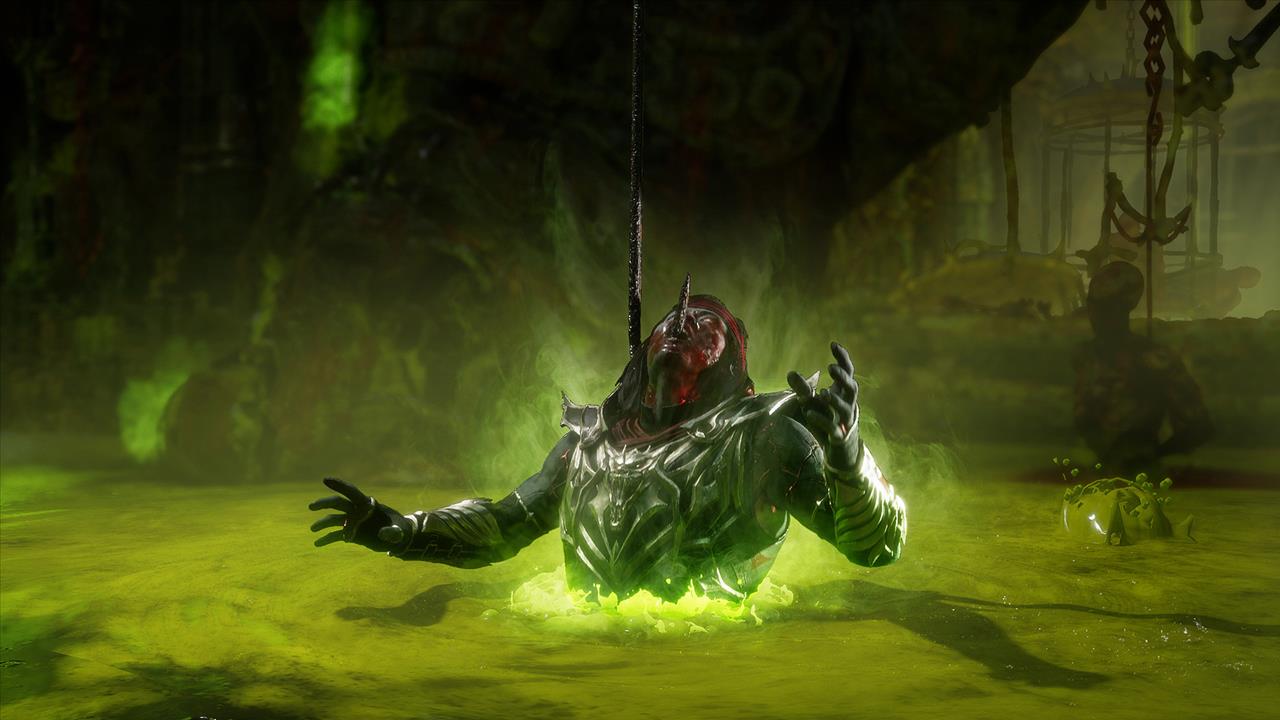 There is also free content including four new stages and the return of Stage Fatalities. The four new stages include The Dead Pool, Soul Chamber, Kronika's Keep and the Retrokade. The Dead Pool is the fan favorite stage that made its debut in Mortal Kombat II and has been featured in multiple MK games, including Deception and Mortal Kombat 9. The Dead Pool is a narrow bridge taking place in a sewer with a green acidic pool in the background. Of course, like the original stage, it includes the classic Stage Fatality where you can knock them into the acid pit melting your opponent to death. The cool thing this time is the Stage Fatality is a throwback to one of those old rumors from the '90s arcade games. Back then there was a rumor that you could upper cut an opponent into the hooks that are hanging in the background. This was never true, but NRS threw in an awesome easter egg where uppercutting your opponent in the new Dead Pool impales them on a hook which slowly lowers them into the acid pool.

Retrokade is also amazing. The stage takes place in an arcade with a projector showing classic Mortal Kombat stages in the background, complete with classic music. There are also some other easter eggs in the background, including arcade machines for old Midway games such as Rampage and The Grid. This stage is completely lore breaking, but as someone that has been a fan of the series since the beginning, I was completely geeking out over this stage and it easily became my favorite. 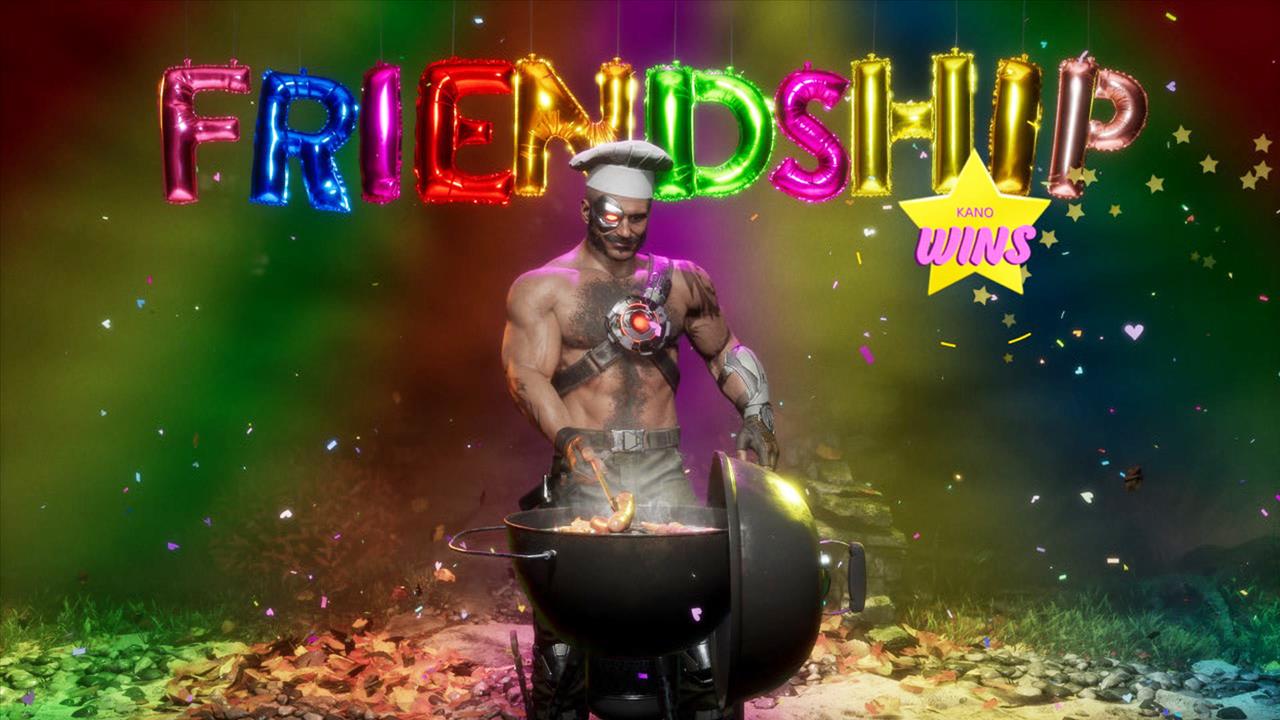 Now I feel like I have to address the elephant in the room here—and that's the price. The Aftermath expansion costs $40. For $40 you get the story expansion, three new characters, and three skin packs, two of which haven't been revealed yet. Everything else included in the expansion, including the stage fatalities, Friendships, new stages and balance changes, are free for everyone who already owns the game. For me the problem isn't so much the price but the fact that you can't buy anything separately. It's all or nothing with the expansion pack. If someone only wants Fujin or only wants the story expansion they are forced to buy the entire thing in order to get the content they want. I do feel like $40 is a fair price for all of the content together, but it is unfortunate that they didn't give people the option to buy content separately if they don't want everything together.

That said, Aftermath is a fantastic expansion to Mortal Kombat 11 that will keep the game alive and well for its second year, and will hopefully lead to more expansion packs with more characters in the future.

Mortal Kombat 11: Aftermath is a fantastic expansion to the game with three fun characters and a great conclusion to the Mortal Kombat story. It's a shame, however, that they didn't offer people the option to buy the content individually instead of together at the steep price.