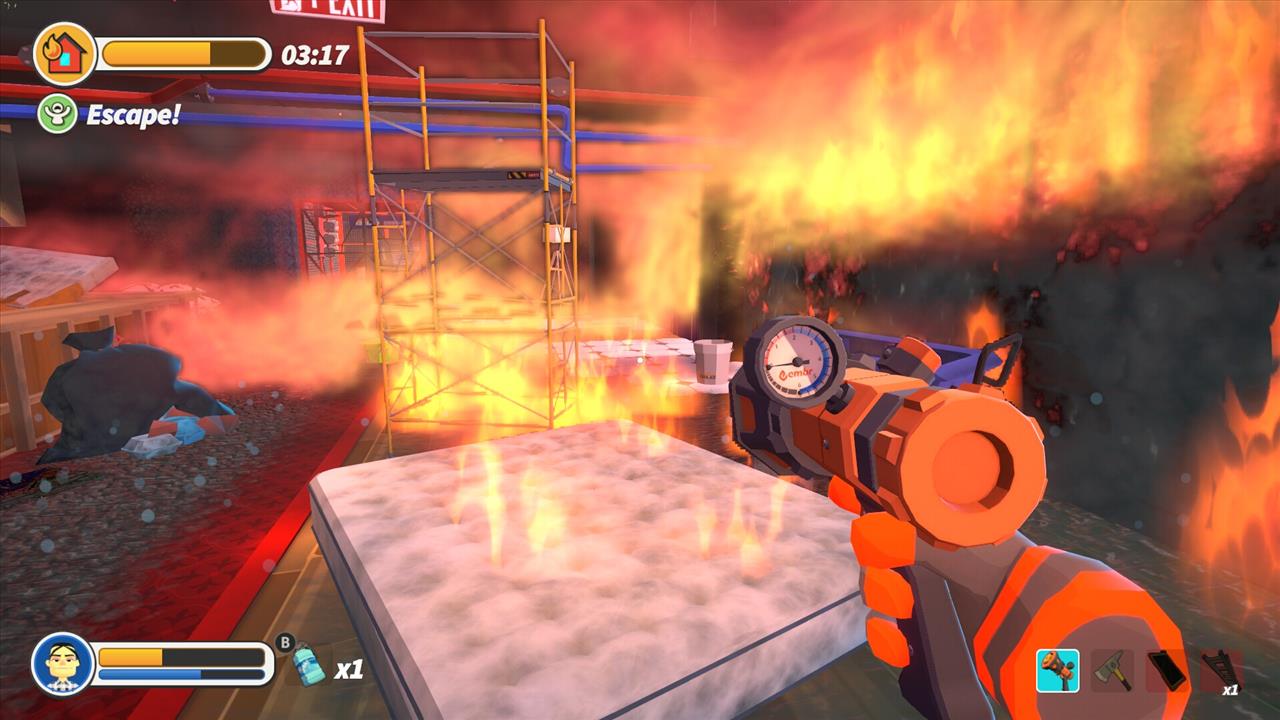 Embr Preview – Burning Down the House

Embr is breaking new ground on Stadia, being the first game to be released in an early access state to Google’s growing platform. Gaming Nexus had the chance to take Embr for a spin prior to the game’s release (early-early access?), and we found that the core of Embr is amazingly solid. It will be interesting to see the ways that Embr develops and changes as it moves through its early access period, but the game already looks and feels polished and fun.

In Embr, the Uber-driver model has been applied to just about every aspect of culture, including emergency response. In this fantastic but strangely believable vision of the future, ordinary people with little to no training can respond to fire emergency calls, which are received and managed via the Embr app.

After applying for the position and attending the Embr-fair—a training exercise for new recruits which also serves as a tutorial for players—the utterly underprepared amateur firefighters can start grabbing assignments via the app, barreling into certain danger and possible death in exchange for a quick payday.

Embr is designed as a multiplayer game, but functions well enough as a single-player title. Just don’t expect to get five-star ratings from your clients at first, as you will almost certainly let a few become engulfed in flames while you are learning the ropes (ladders?). The structures in Embr are big, and there’s a lot to keep track of once the flames start raging. 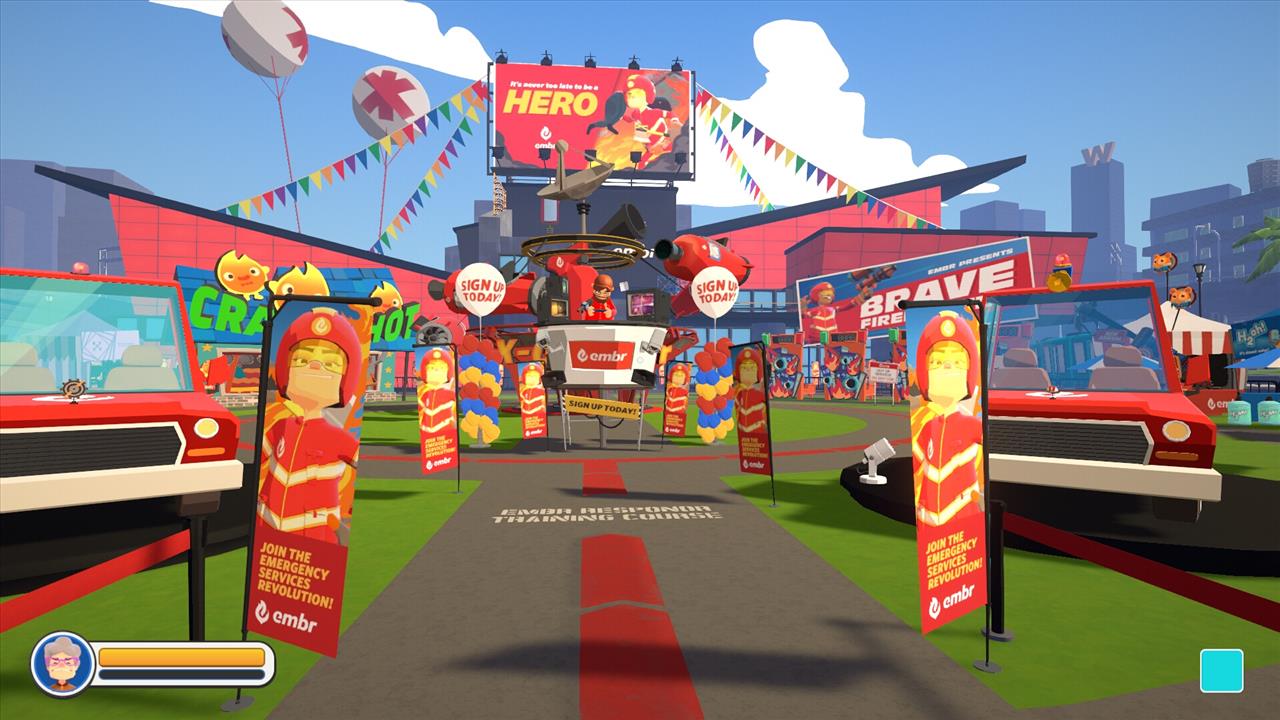 A typical level has players arriving outside a structure already well on its way to becoming a pile of cinders. Victims, usually between six and eight of them, are scattered about inside, and it is up to the player to rush into the building and pluck the possible victims from the jaws of death one at a time, fireman-carrying them back out to safety.

As the level progresses, the fire spreads throughout the building in a very natural and somewhat terrifying way. Structures become weak and collapse, causing new barricades to fall into your path. In addition to fire, players must deal with other obstacles, like shorted electricity, poison gas, and panicking or utterly indifferent citizens. 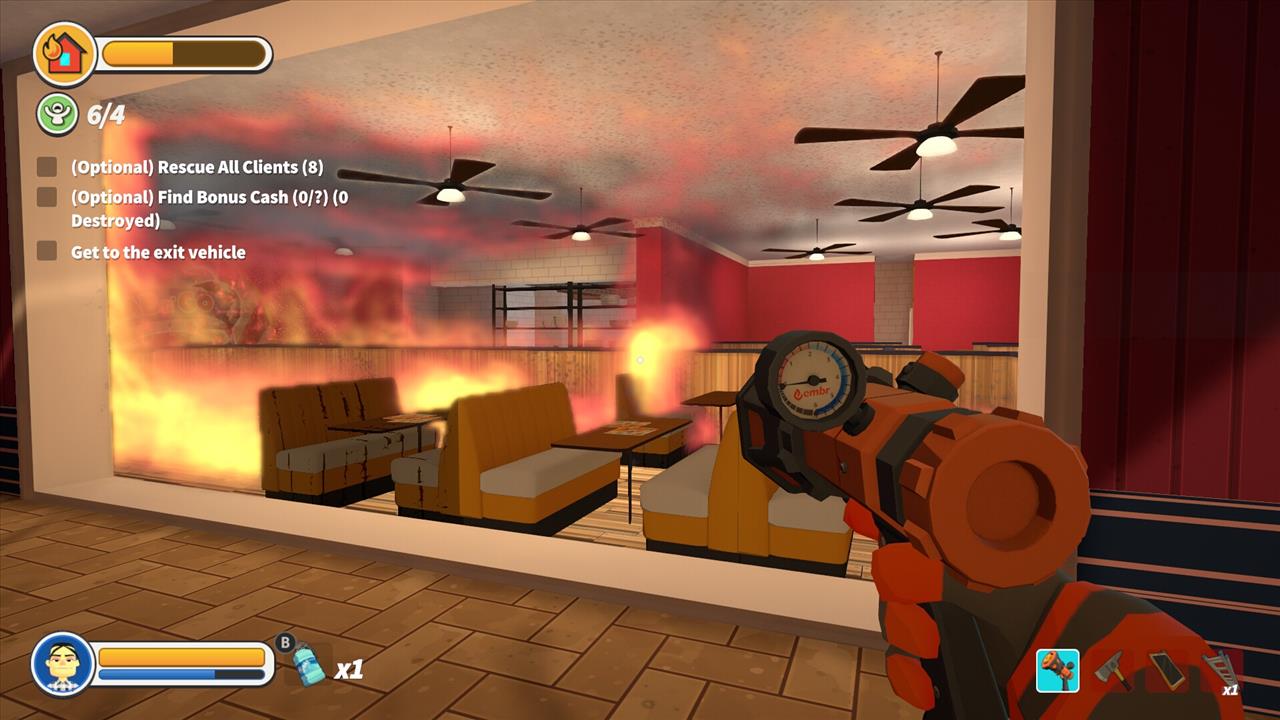 To combat the fire, players have a number of starting tools at their disposal, and more can be bought with their earnings, through the app, naturally. The most obvious item in your firefighting arsenal is your hose, which allows you to temporarily blast the fire, clearing a path through the rapidly expanding inferno.

The hose does not have an infinite supply of water, though, and must be refilled on occasion via water sources you find while wandering the blazing building. Hoses can also be fashioned with optional attachments, allowing them to spray in a tight beam for accuracy, or over a wide area for massive spray-downs. 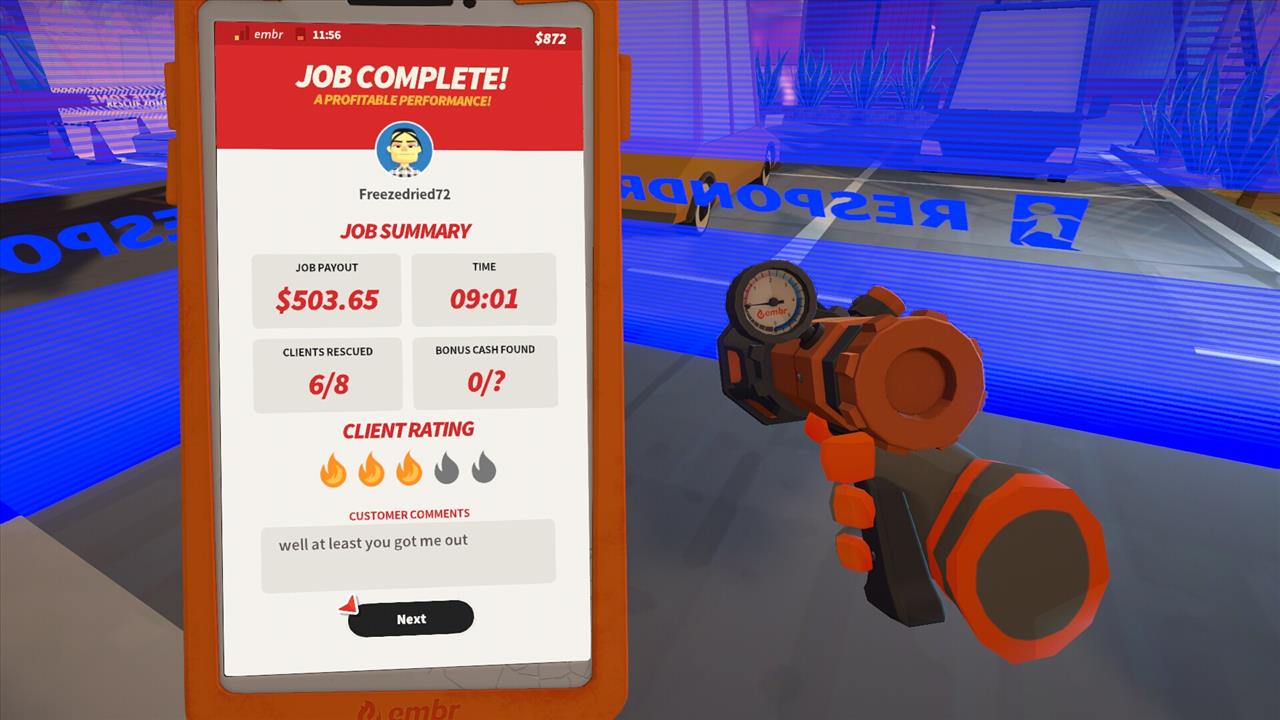 In order to find the folks you are tasked with rescuing, you are equipped with a handy-dandy scanner, which can indicate the general area of the building where you will find your clients, usually texting or playing games on their phones. Be careful, though. Just because you can find someone doesn’t mean you can reach them easily. Embr seems to take a sick delight in piling obstacles and difficulties in your path – everything from explosive barrels to shorted-out oven burners will cause you to turn around and rethink your path.

Luckily, you also have a ladder and a fire axe at your disposal, which help you breach otherwise inaccessible areas. The fire axe can’t go hacking through any wall, however, so you will need to find a wood door or open window to climb through. The ladder gives you access to roof and higher floors, but can be a little twitchy with windows, sometimes blocking your point of entry with its dumb ladder-y self. 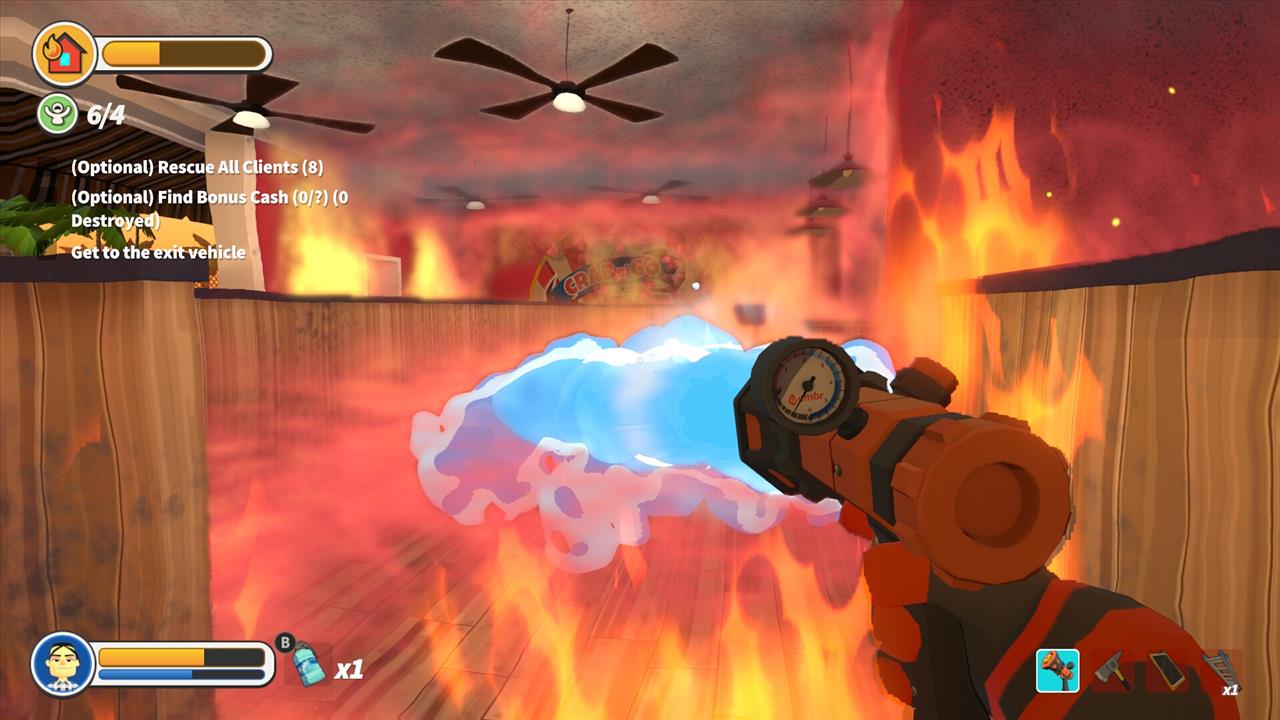 As you work your way through missions, earning cash and increasing your reputation, you will be able to augment your Embr responder with some sweet gear found in the app. I haven’t had a chance to dig into many of the supplemental tools you can buy, beyond the very handy water grenade. But I did invest quite a bit in a variety of clothes and protective gear, which can offer stat bonuses to help in certain situations.

What impressed me most about Embr was the fact that, for all its cartoonishness, the game delivers a real sense of danger. Fire is going to burn the building down, no matter what you do. Indeed, the game reminds you that you are not really there to put the fire out – your purpose is to rescue the people trapped inside. But the fire physics feel real, and it is difficult to put the idea that you could save the building out of your mind. 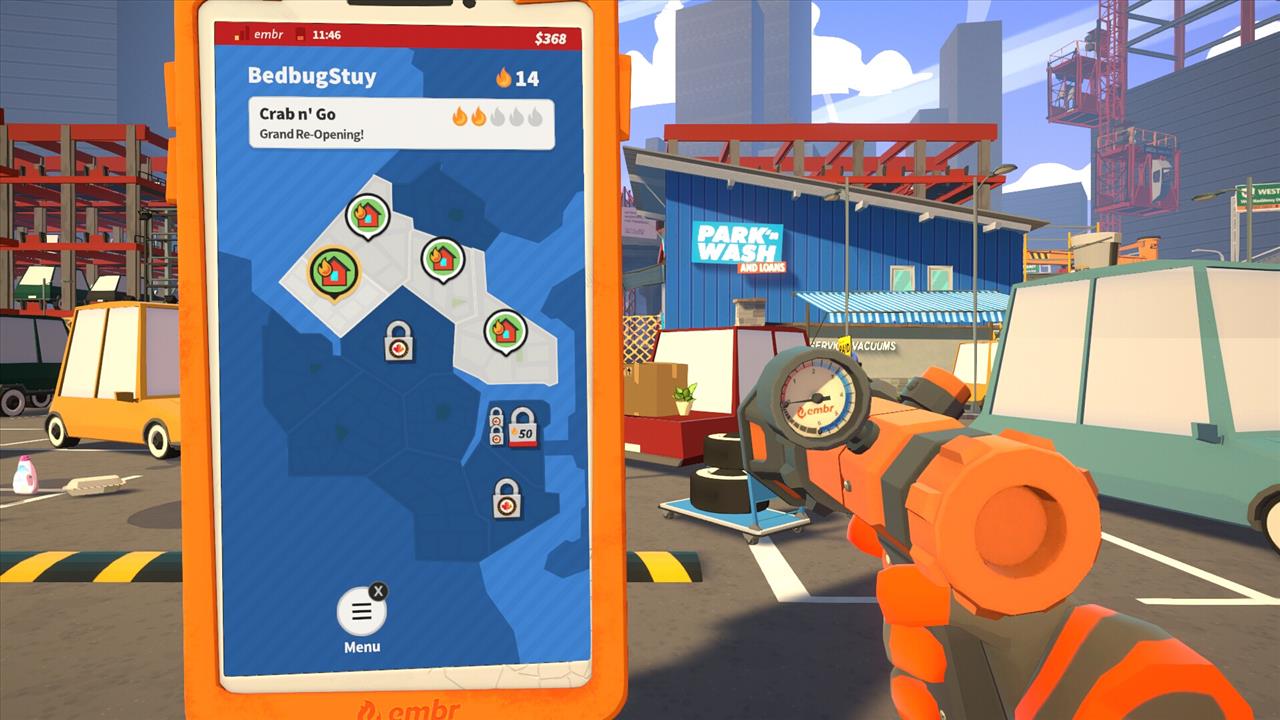 There is no ticking timer in Embr. You can take as long as you want to rescue people from the flames, but the longer you take, the more intense and dangerous the situation becomes. You will find yourself prioritizing who to save by how easy they are to reach. There will be situations where you see people that need rescued, but there will be no viable way to get to them. The need to save people in this situation can be intense, and though failing just results in a lower star rating on a video game app, I couldn’t help but feel a little bad about it.

Though fighting fires doesn’t seem like fodder for a good game, Embr is already a very enjoyable title – and it is likely to improve as it evolves through early access. I could easily see plenty of players teaming up to tackle this game, especially once some additional structure and progression is added to the mix. Now, if only I can convince three friends to join me and put together our own firehouse. I get to be chief. Calling it right now.