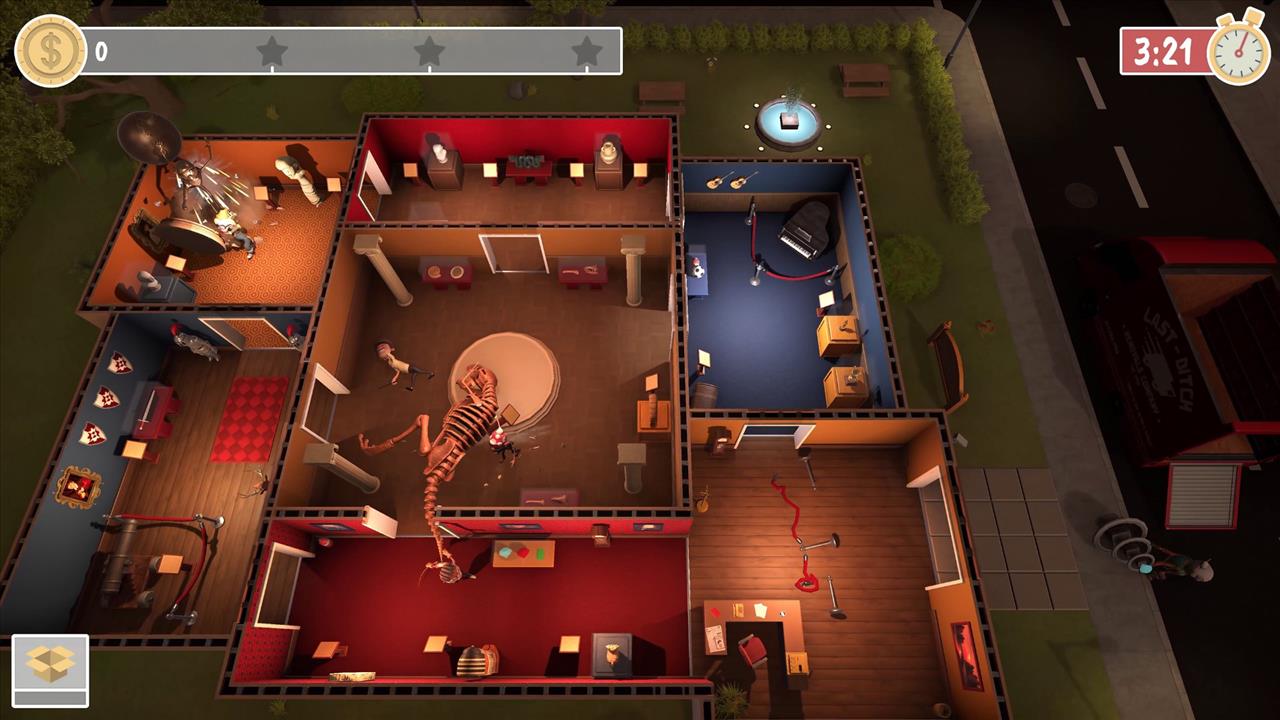 Get Packed Review – The Best Multiplayer on Stadia

Moonshine Studios’ Get Packed is a game in an awkward position. It is a remarkable multiplayer game that finds itself on a platform that isn’t quite firing on all cylinders yet as far as multiplayer gaming goes. Don’t get me wrong, I’m still an ardent Stadia supporter. But even I must admit that the platform doesn’t exactly make it easy for people to find each other and connect online. And playing multiplayer on your TV over Chromecast necessitates buying a second (or third, or fourth) Stadia controller – something even I haven’t gotten around to yet.

But I think that any curious party ought to go ahead and pick up Get Packed anyhow. Google has been picking winners for its “First on Stadia” program, and of all of these quality indies, Get Packed is the best of the bunch. This is a game poised for an Overcooked-style mainstream breakthrough. As the Stadia community grows (and the game eventually moves onto other platforms), Get Packed is going to sell, sell, and sell some more. Why? Well, because Get Packed is a wild, riotous good time.

The core of Get Packed is fairly simple. There’s a humorous story wedged in there, but it exists mostly as trimming, intended to shuttle the player from level to level. Up to four players start outside of a building (structure types are deeply varied). With the camera hovering in the sky, everyone has a bird's-eye view of the interior – rooms, hallways, and stuff. Lots and lots of stuff. Outside the structure is a moving truck. A clock starts, and the team rushes into the building. Falling all over each other, they start grabbing stuff and shuttling it out to the moving van.

Every object in each building has a monetary value assigned to it. Potted plants are worth maybe 12 dollars. Computer towers are worth a whopping $300. How much is that bear rug worth? Or that foosball table? The only way to know is to haul them out the door and shove them in the truck.

With three minutes on the clock, players are in a race against time. Get Packed uses a three-star system, and in order to see the next level, players have to pack enough stuff into the van to achieve a monetary value worth at least one star. But, like the aforementioned Overcooked, there is a teamwork/pride dynamic at work here that will lead to a lot of “C’mon guys! We have to get three stars!” rallying cries. It is possible to whip through all of Get Packed’s varied levels in about an hour, but what’s the fun in that? If you are anything like me, simple progression won’t be enough. You will want to do well. 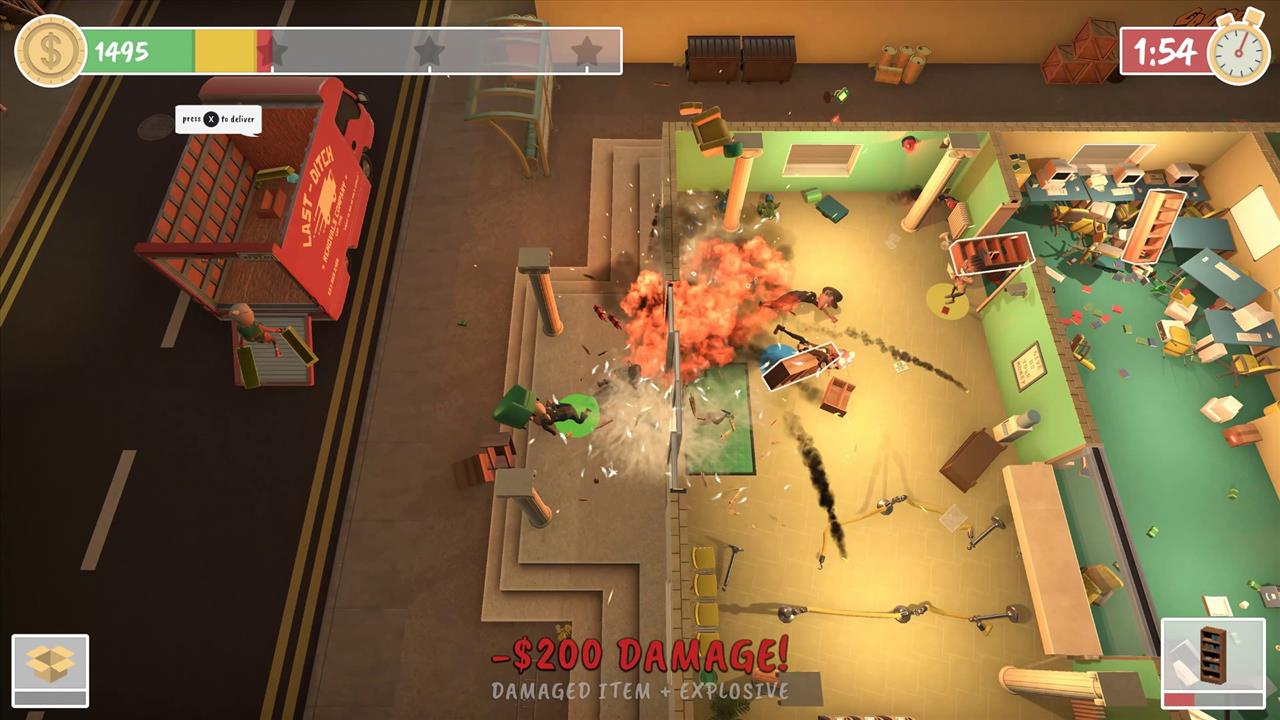 The genius lurking in Get Packed is that “doing well” seems easily achievable, when in fact, it is nigh impossible. The game’s physics engine is cranked to an absurd level. Everything you touch has weight and heft, and your wobbly characters’ overenthusiastic physicality causes them to flail about constantly, wrecking anything in their path. Every object can be broken or destroyed, which counts against your overall cash flow.

Characters bounce around Get Packed’s cleverly designed levels, careening off each other, knocking each other out, falling out of windows, and generally causing an insane level of chaos. Every well-laid plan goes instantly awry, and the game itself throws wild and unexpected obstacles at the little moving team. 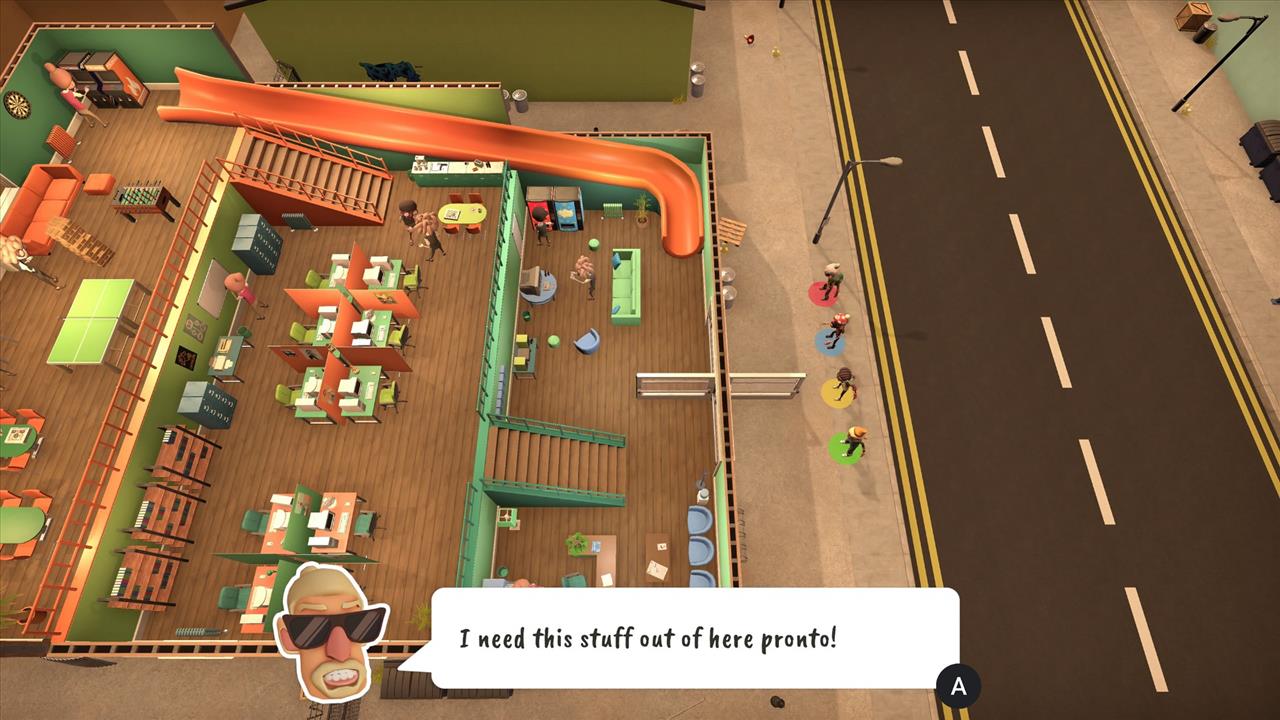 This is the sort of game that has secrets buried in the levels, with the physics engine causing objects to interact in wild and unexpected ways. It is entirely likely that one player could call out, “Oh my God, did you see that?” and everyone else would answer, “No,” simply because there is so much happening on screen and everyone is focused on their own struggles – trying to wrestle a video game cabinet through a revolving door while being assaulted by “nerds” that don’t want it to be taken, for example.

Your arms are controlled individually by the Stadia controller triggers, so you can grab a small object in each hand, or you can attempt to wrestle larger things like sofas, conference tables, and cars, with two hands. Get Packed offers one small concession to the constant battle with physics, allowing players to occasionally “flat-pack” a large item they are holding in both hands, smashing it down to a more manageable size. You can’t do it often, and, like everything else in the game, it’s purposely kind of flaky, but it’s a great way to quickly move a grand piano into the van. 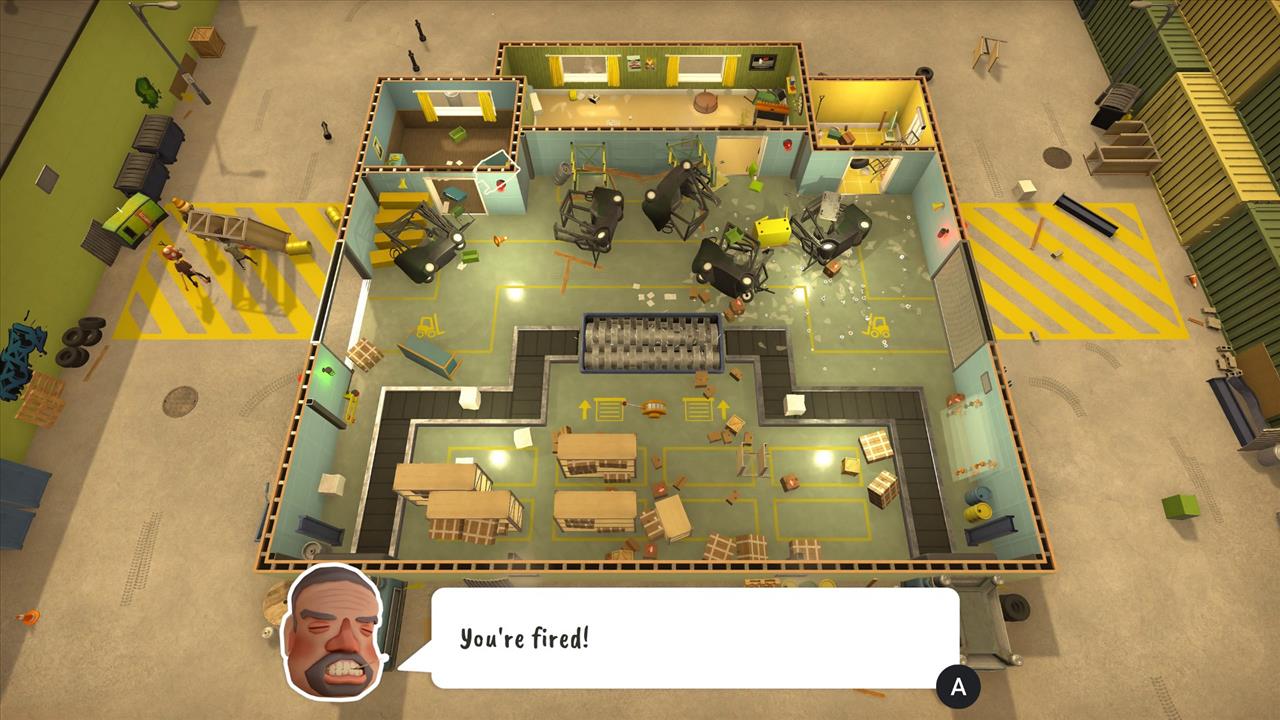 Of course, characters’ hands are a little sticky, so even the act of dropping something off in the van can be challenging. It is entirely possible – even likely – that you will struggle to get an item into the van, and then push it right back out again, shattering it on the ground. And, as the moving van has to be sent off for unpacking when it gets full, it is 100% possible to send other players off screen for 20 seconds or so if they are in the truck when you send it off.

If this sounds like the sort of game where everyone sits in the living room (or online) and screams at each other, well…yes. It is that sort of game, in the best possible way. There is a magic in this sort of disorganized chaos, and people’s need to try to succeed in spite of every mechanic in the game working against them is almost impossible to temper. It is very easy to blame your friends for breaking a television while you are attempting to shove a king-size bed out a window. Obviously, they are simply being careless, while you are using strategy. 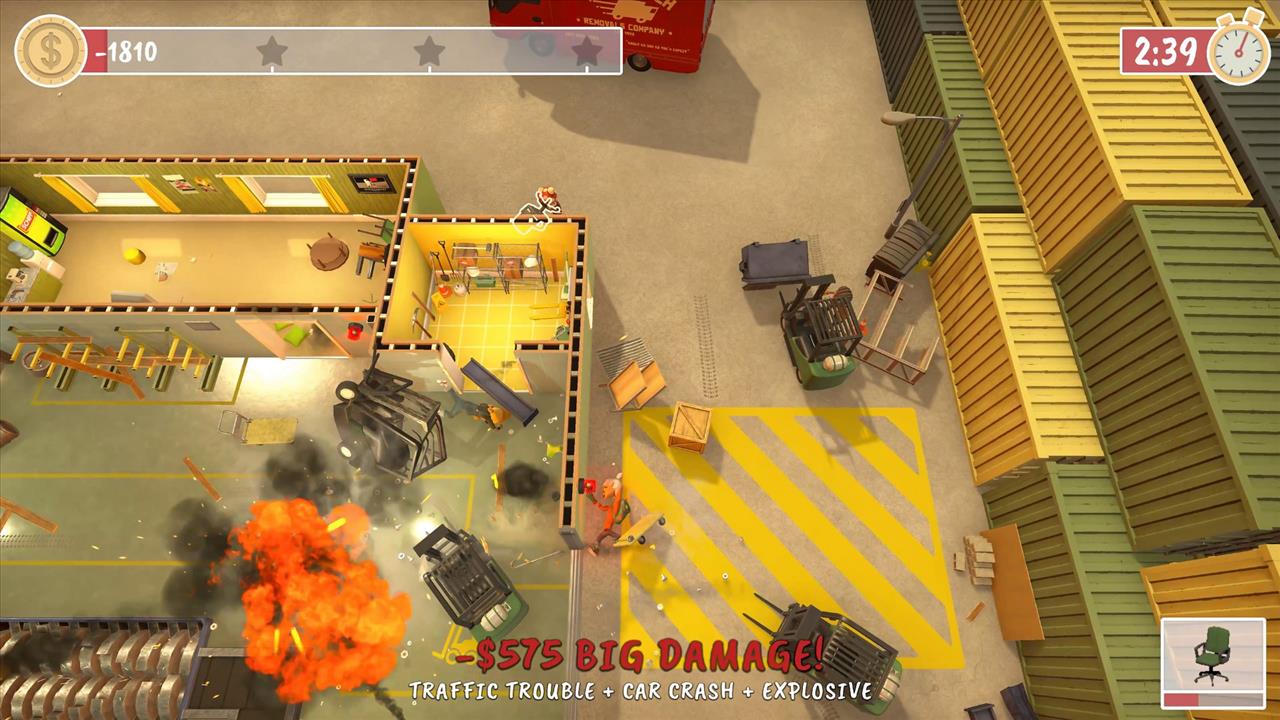 Level design in Get Packed is extremely varied, and there is more content on the way. Each level has its own twist, with unique mechanics surprising and frustrating players at every turn. A haunted house level has ghosts floating about, smashing up furniture and causing a nuisance. You can suck them up in a vacuum if you can catch them. The prison level has cells that open and close, sometimes locking players inside. The “Google Office” level has a slide that can carry stuff down to the first floor, and a staff that will attack anyone trying to take their fun toys.

A couple of different game modes round out the experience. Destruction mode forgoes the moving van entirely, challenging players to enter a level and just wreck stuff. And a competitive mode splits players into teams, competing to pack as much as they can into separate vans. This brings a new dynamic into play, as players race to get the good stuff, screwing each other over and smashing into each other on purpose.

I enjoyed playing Get Packed in single player, as the game takes on a puzzle-like aspect when working alone. How can I distract these rotten cops when I’m all by myself, damn it? But of course, Get Packed really comes alive when you add friends and family to the mix. This is a lively game, and it's intended to be played with groups.

Get Packed is a wild multiplayer title, challenging players to pack a moving van while wrestling with some seriously destructive physics. Even in single player, the game is a good time, but in multiplayer Get Packed comes to life. Fans of games that cause them to yell at their friends should have a great time here, as this is a polished example of the genre.