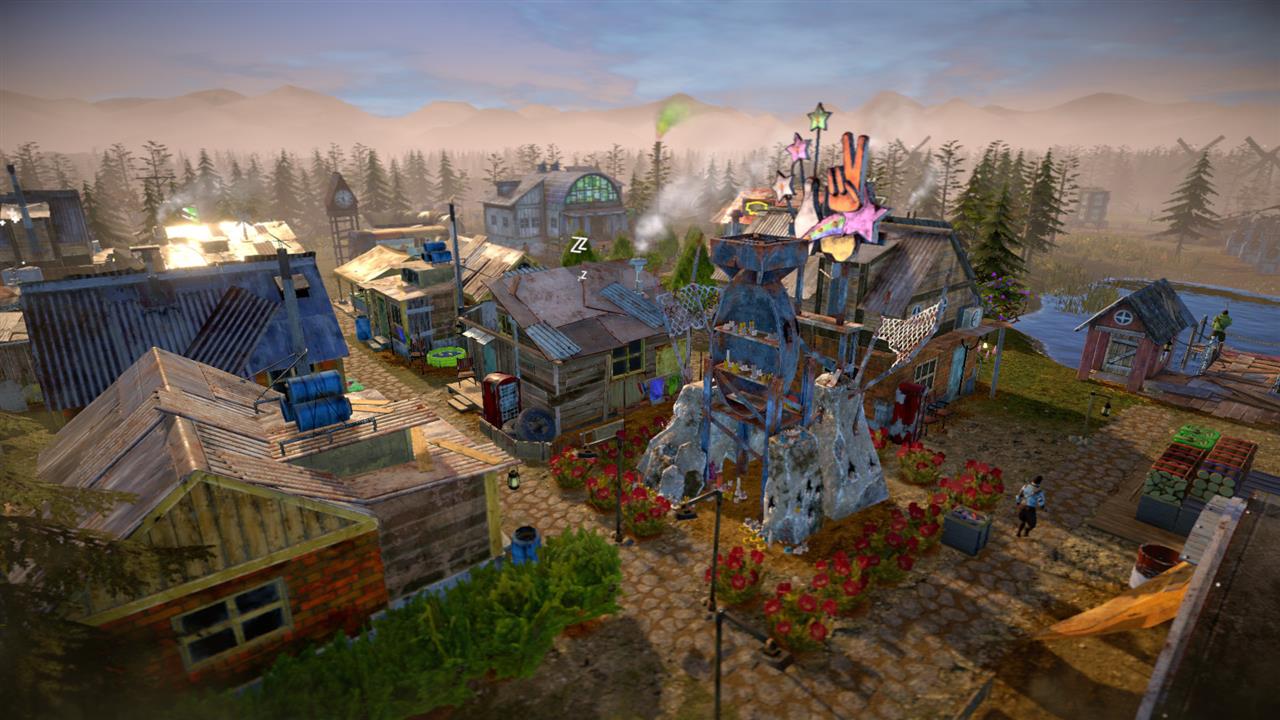 Written by Randy Kalista on 6/3/2020 for PC
More On: Surviving the Aftermath

They caught me off guard. I opened my gates to four people looking for a new home, a home out of the cold, sheltered from nuclear winter. My heart went out to them. I can be compassionate like that. The moment I opened the gates, however, half of them went hostile. That’s when the shooting started.

Two of those beggars opened fire on my ragtag camp. Thankfully, one of the other guys I had let in the gate was also a specialist—a shooter himself. So, he handled the problem right then and there. He turned on those two newly formed hostiles, two people he’d traveled here with, and capped them both, no regrets. With the bodies still on the ground, he strolled in, a little shot up himself, perhaps, but ready to become a contributing member of the colony. Welcome, newcomer. Good to have you.

Surviving the Aftermath is a city builder. Not on the scale of a SimCity or a Cities: Skylines, but one on the scale of a Banished. One where you indeed manage the residential, commercial, and industrial needs of your survivors, but you’re building one thing, one structure, one stretch of dirt path at a time. 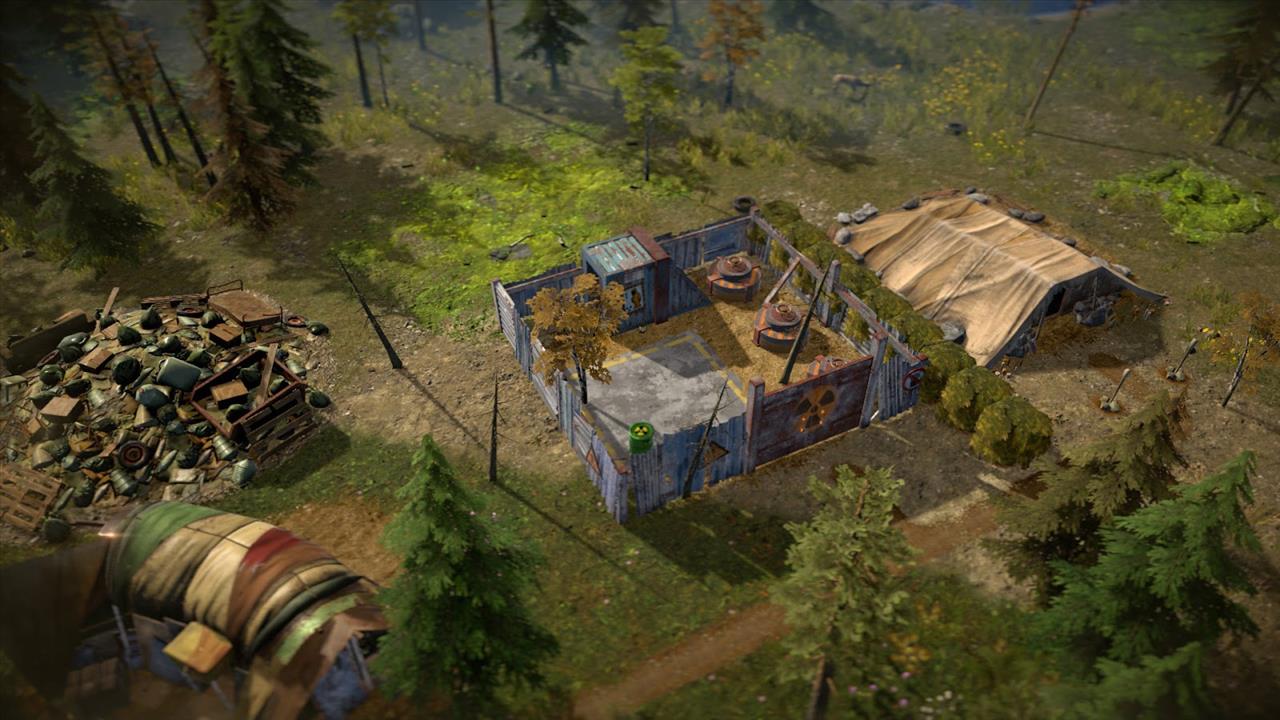 You begin with a dozen people, maybe fewer, depending on the difficulty conditions you set for yourself. There’s a square valley with wood-built and concrete-built ruins. There’s some deer hunting available, and good fishing to be had. You might just be able to make a life for yourself here as a hunter-gatherer. But the clock is ticking. If you think you’ve got time, you’re already behind the curve. The next post-apocalyptic aftershock is always right around the corner, ready to rock the foundations of your camp.

So you build. You build tent shelters. You build a water pump. You send your settlers out beyond the campfires to collect food and building materials. Watch out for the wildlife. Safety is not guaranteed, let alone your survival. 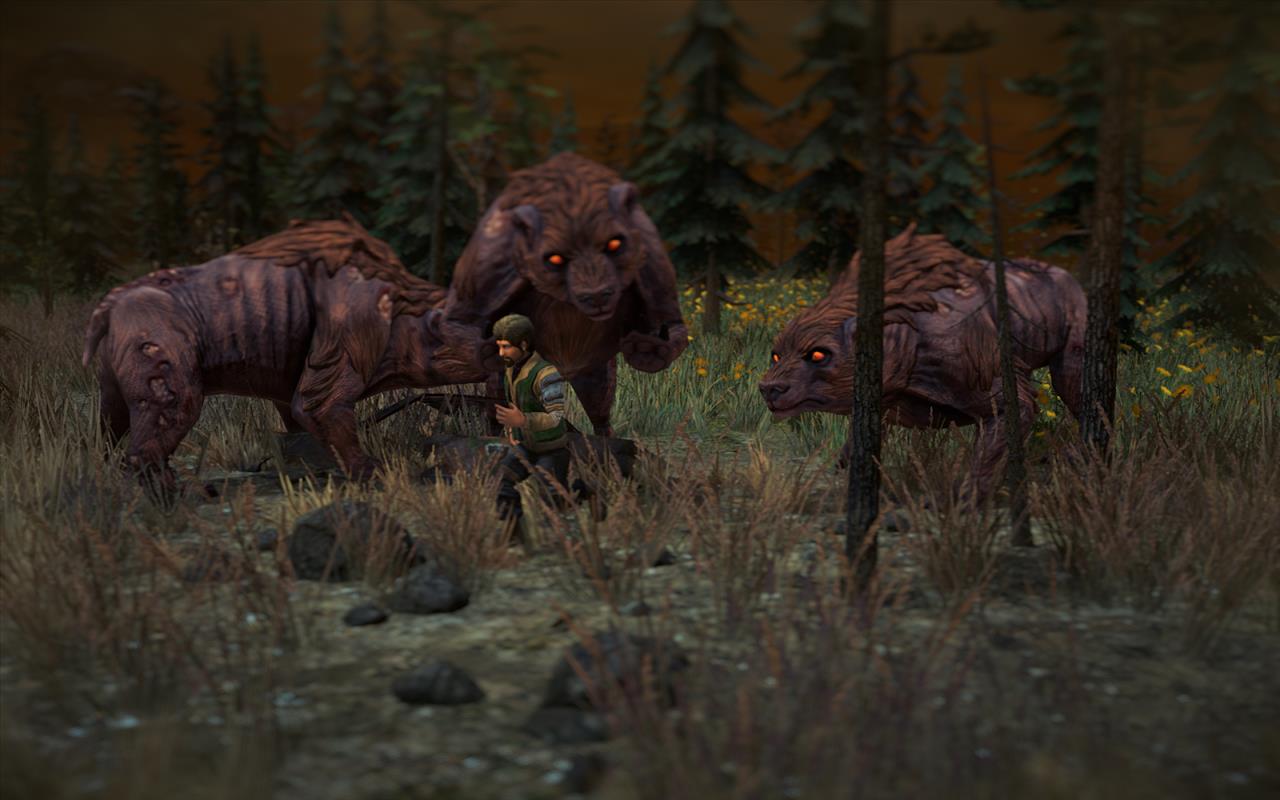 When a pandemic strikes my camp, I’m distressed on multiple levels. Now’s not the time, game! Now’s never the time. But I only have myself to blame. Are we in the aftermath or not? The sound of coughing fills my camp, flies buzz in furious circles, and rats scurry between tents. The air is as dry as everyone’s lungs. But, like everything else that’s hit us, we knuckle up, we soldier on. We just try ignoring the sickly patina at the edges of the screen.

As we rebuild, three radio stations fill the airwaves, and each one is a perfect soundtrack. The Skylights radio is airy alternative pop, and it absolutely breaks my heart. Another station sounds like Red Dead Redemption and The Princess Bride unwrapped a Martin guitar for a wedding gift. Each station is only a few tracks long, but they’re all my favorite. 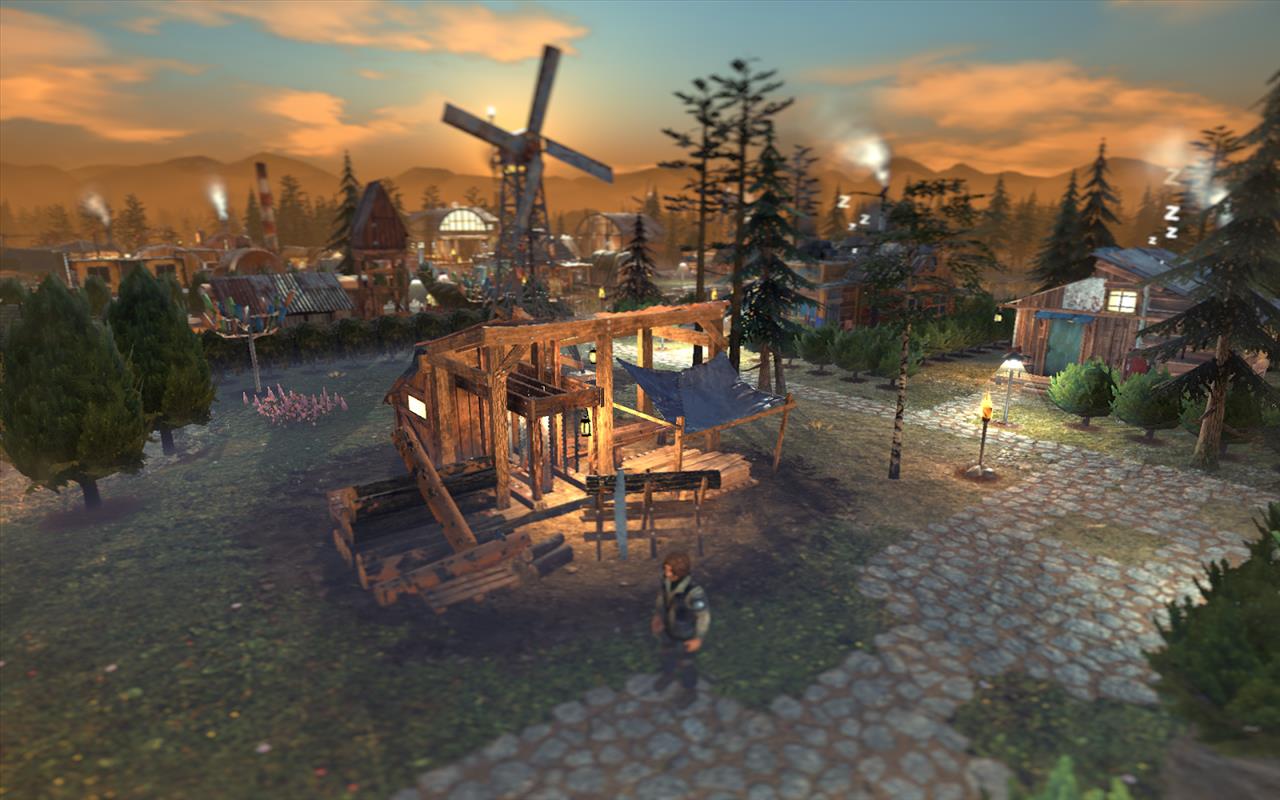 This being a city builder, it’s almost—but never quite—personal enough. You can squeeze a little bit of subtext out of the gameplay, but mostly you only get the over-the-counter text the developers feed you. Sometimes, though. Sometimes a subtext emerges. Like when you figure out: You can’t help people that won’t help themselves.

Take Noah, for instance. Noah works at one of my medical tents. Somehow he got himself down to about 25 percent of his health. Not sure if it was toxic sickness, the pandemic, or if he was attacked by some enormous beetle. It doesn’t matter. What does matter is that Noah, who—may I remind you—works in the medical field, refuses to heal. I’ve even got 10 big huge first aid kits sitting around here somewhere, but he still refuses. I want to yell, “Physician, heal thyself.” 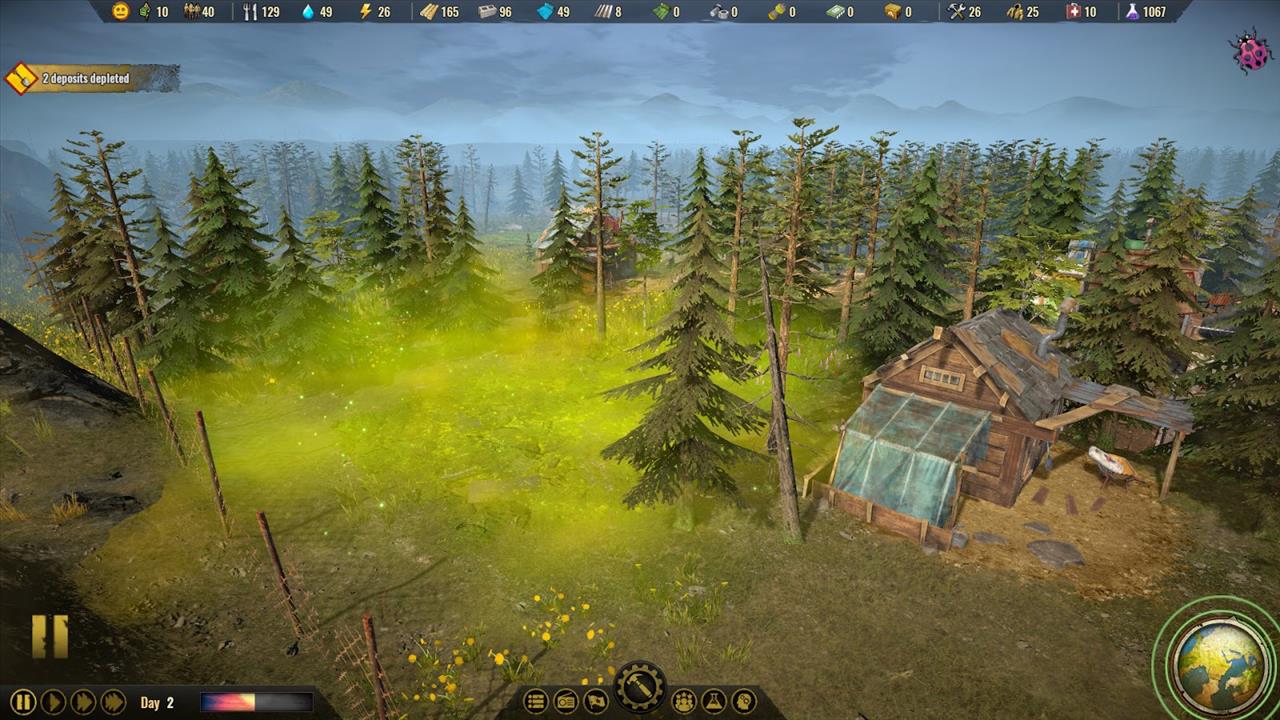 Or take colonist Aubrey. Aubrey is malnourished. I’m asked to make more nutritious food. I don’t know how to do that, though, since I’m already bringing in a healthy bounty of venison, berries, fish, corn, and potatoes. I’m farm-to-table, lake-to-table, and forest-to-table. So, I don’t know what to tell you, Aubrey. Your traits tell me you’re suspicious, educated, and a bullet sponge. I don’t see why you can’t help yourself to a more balanced meal, unless “suspicious” means you’re like my grade schooler who’s “suspicious” of everything her mom and I ever make for dinner.

Meteor strikes are intensely accurate, if I’m being honest. Stuff rained fiery death down on my camp for an entire day and seemingly had a better hit ratio than than a crack XCOM team. And again, here’s where I questioned the abilities of my volunteer firefighters. They were seemingly asleep on the job. I had tents I’d cleared away and completely rebuilt long before anyone put out the other fires raging. Couldn’t explain why some folks just stood around, watching it burn. 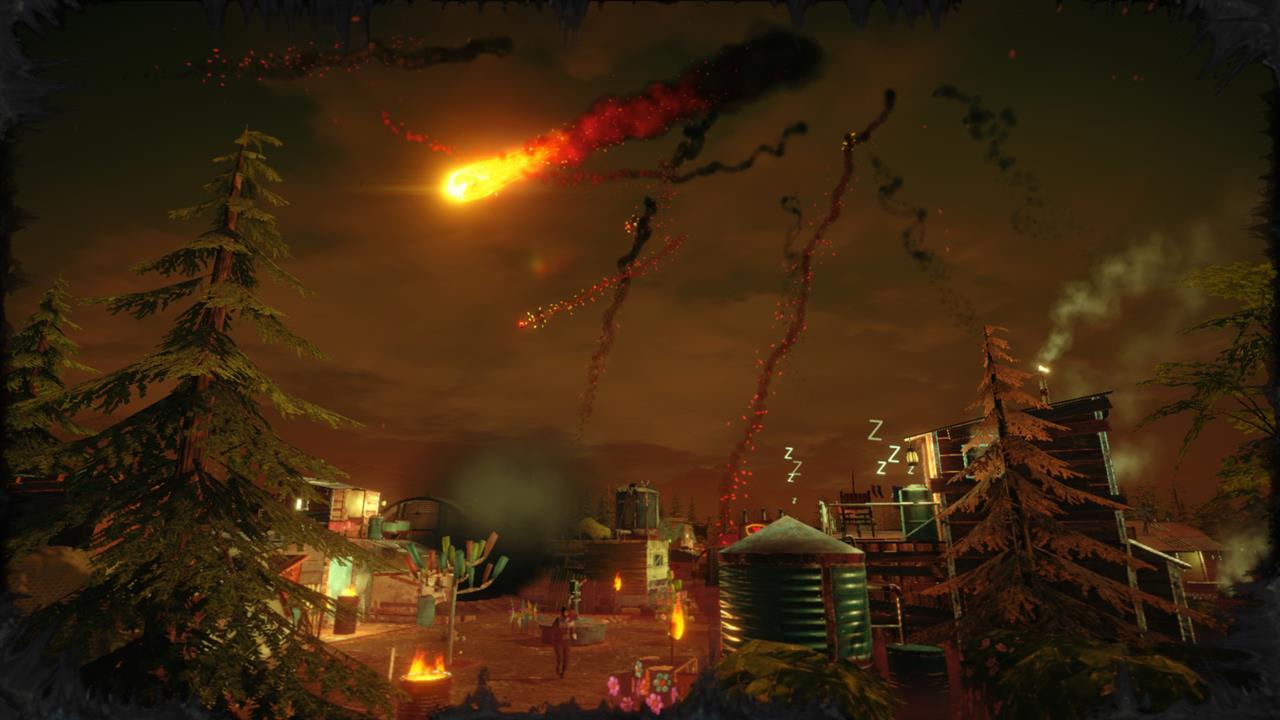 Perhaps all of this can be chalked up to early access bugs. Fair enough. Because, while Surviving the Aftermath is very user friendly, there are still cracks in the pavement with weeds growing through. I’m willing to give the devs time, however, because the game has got good bones.

Some moments, even on the easiest of difficulty level, can be brutal. A second pandemic hit and I was only on day 45 or so. The pandemic not only sent a huge portion of my population scurrying to the medical tents, it started withering my crops, too. But that’s okay (haha) because three bandit vehicles with mounted weapons showed up to gladly snatch my bribe money—then they demolished my front gate anyway. The bandits took a shotgun blast approach, spreading out quickly through my camp, murdering half of my colonists and setting multiple buildings on fire. 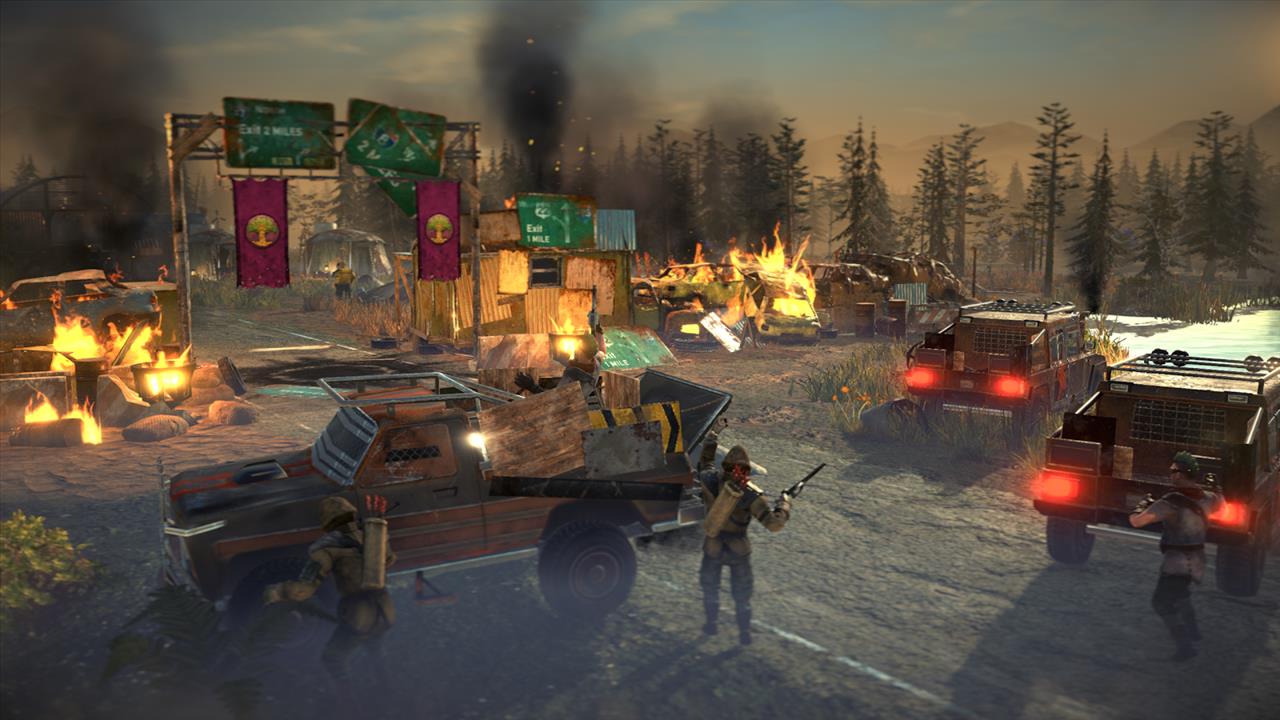 But that’s ok, too (insert more nervous laughter), because the next morning, colonist Evelyn went hostile, attacking the medical tent that was treating pandemic victims. Jin, one of my specialists whose skills are more aligned with exploration than attack, started shooting into the tent. When crazy Evelyn was shot, there wasn’t even a skull icon indicating her death. Then Henry died of infection even though I had open hospital beds. Things are going great. How was your day?

Felt good as I got better and better at handling pandemics and other tragedies—a pesky string of problems that seemed to crop up every few days. I had the medical infrastructure in place, and, for instance, when yet another pandemic started ripping through my colony, I’d open up all the med bays, put hospital corners on all the bed sheets, and shift my workforce away from nonessential industries into essential ones. It was almost embarrassing remembering how I’d been plunged into such chaos during my first pandemic, especially compared to my second and third. All I can say is, it gets easier. Take notes, America. 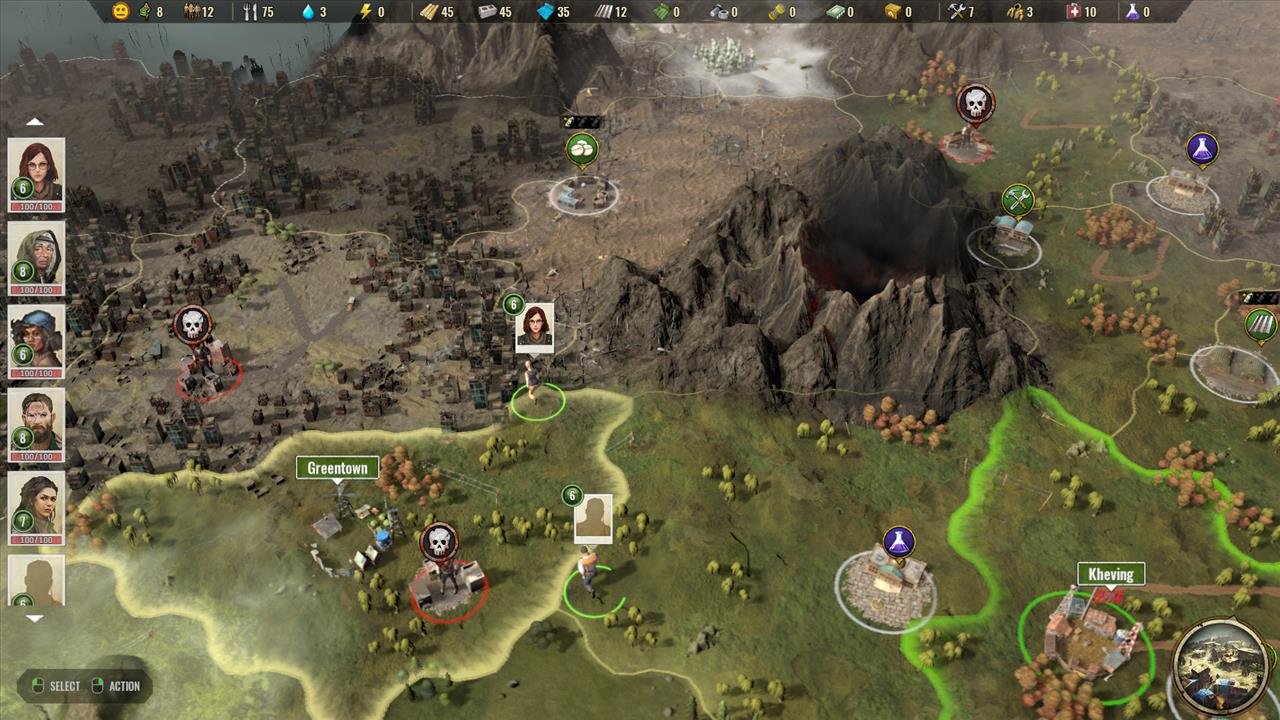 Surviving the Aftermath comfortably bounces between up-close colony management and overworld map exploration. I had to take some inexplicable colonist behaviors with a grain of salt, though the majority of them wake up in the morning, put in an honest day’s work, then get a little R&R at sundown. I wouldn’t mind having more RPG’ish character traits and interactions, but this is a colony builder, not a story generator.

All in all, I like what Surviving the Aftermath has cobbled together so far. Here’s to a meaningful early access period. I’ve enjoyed the game enough to actually submit bug reports and friendly suggestions. I wouldn’t do that if the aftermath was hopeless.