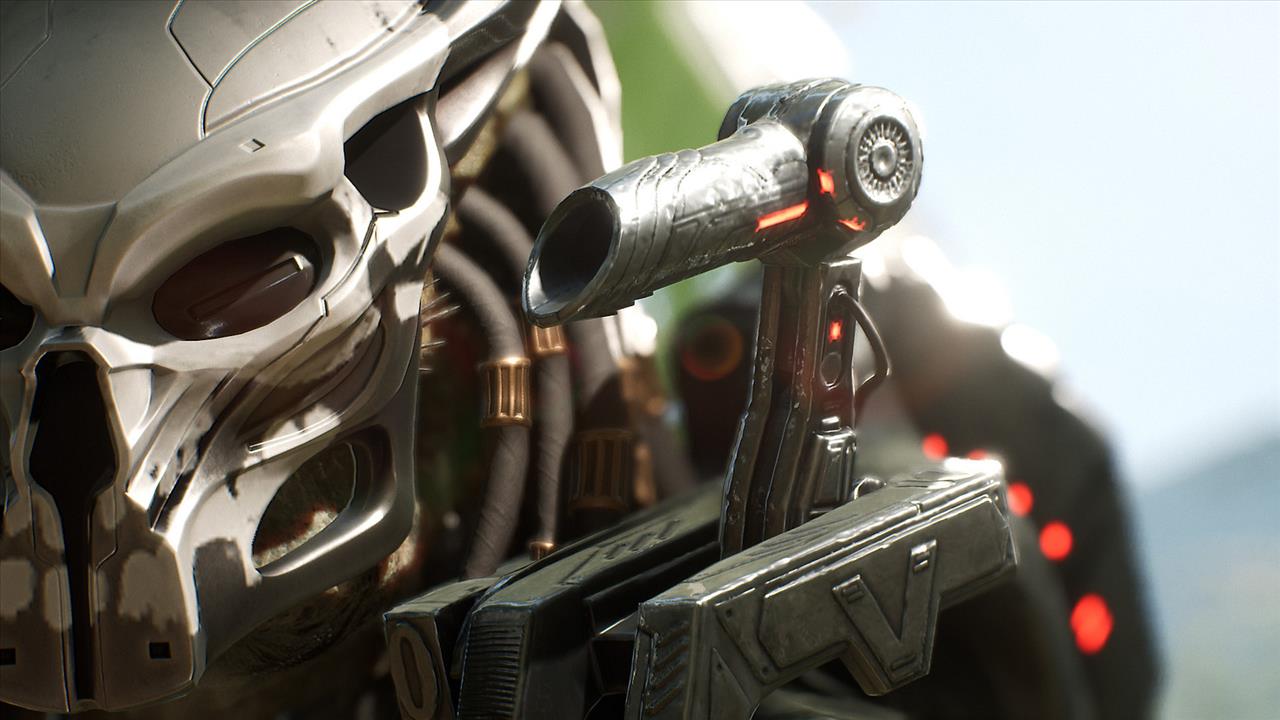 I remember the Predator film well. I had it on VHS and my brother and I must have watched it a hundred times growing up. It is up there as one of the greatest movies of the '80s, an absolute action tour de force. It launched two governorships and an entire big game hunting alien franchise that has been around the block so many times, it frankly has begun to grow stale. If it didn't jump the shark with the disappointing Alien vs Predator crossovers, the latest two attempts to reboot it with Predators and The Predator both fell flat despite large budgets and star power behind them. If there is one thing Predator: Hunting Grounds does right, it is taking the franchise all the way back to its roots in the South American jungle. The concept is back to its core, be the hunter or be the hunted in the best setting for either to take place.

The gameplay largely sticks to the plot. You either team up with there others as commandos or take the role of the Predator in a 4v1 game of cat and mouse, where the mice have an arsenal at their disposal. At first your loadout options are limited but as you play each game rewards XP which will slowly unlock better weapons and perks. You will also unlock new skins for your outfits and weapons via loot boxes. They're called Field Lockers but they are loot boxes by another name and in my experience only contained cosmetics, not effecting gameplay. The boxes can also be bought with in-game currency and every item from them can also be bought directly with that same currency that you earn by simply playing. So as far as loot boxes go, nothing to see here really. I wish they didn't exist in-game because they further normalize a practice that is a plague in modern day gaming but at the same time do not effect the outcome so...meh.

The basic gameplay loop is you load in as a co-op commando and run through a few mission objectives eventually making your way to an extraction, if you survive long enough to do so. Somewhere else on the map spawns in the player-controlled Predator and their objective is simple: slay the commandos and collect their skulls as trophies. Commandos actually end up with a few more options once the hunt is on, for even falling short of the stated objectives, killing the Predator also initiates a win condition. The Predator has the option to go thermonuclear if the commandos can't get a helmet-less head shot in on a downed nemesis in time and then the Commandos get one more choice, try and disarm the weapon via a mini-game or run like Hades to get clear of the blast area. 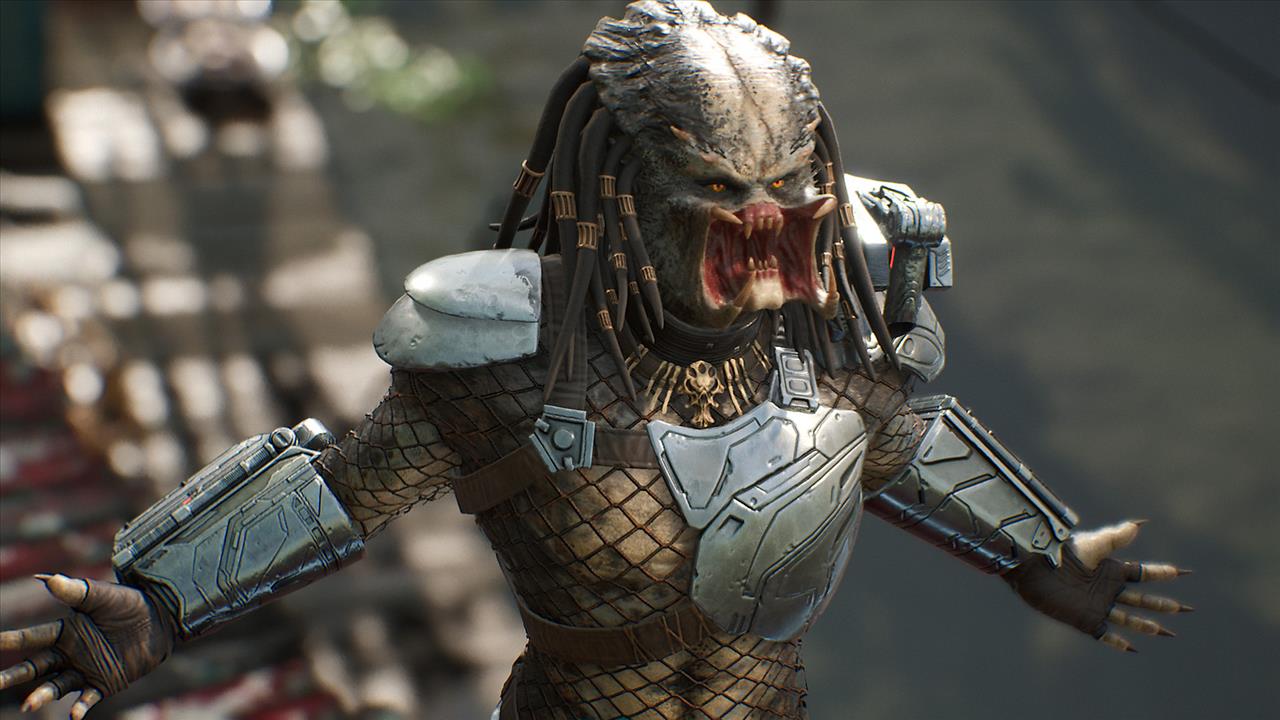 Beyond that loop, well, there's nothing really. That's it. That's the game. It's $59.99 for a single game mode that feels like the same thing every time. As a Predator, that truly is it. You can level up and unlock a few new gadgets beyond the arm blade and shoulder laser you begin with, but you will never be tasked with anything other than trying to kill the commandos. As the hunted the objectives do change from mission to mission, but in name only. They are all just thinly veiled plots around the basic loop of: run to this location marked clearly on the map, mash Square to initiate something, shoot a few NPC enemies that come ambling up to the objective point and offer little to no resistance, then do it all again a few more times until the Predator or helicopter comes.

It's quick an easy to jump into a game as a commando, 30 second-ish wait times. Trying to be the predator takes much longer. The game advertises around six minute load-in times but I regularly waited much longer. In some respects I found playing as the commando more enjoyable. I might not have been able to enjoy the power fantasy of being an alien most-dangerous game specialist, but even given the same-ness of it all, there was more to do than just run around the trees "Predkour" style and search for heat signatures. 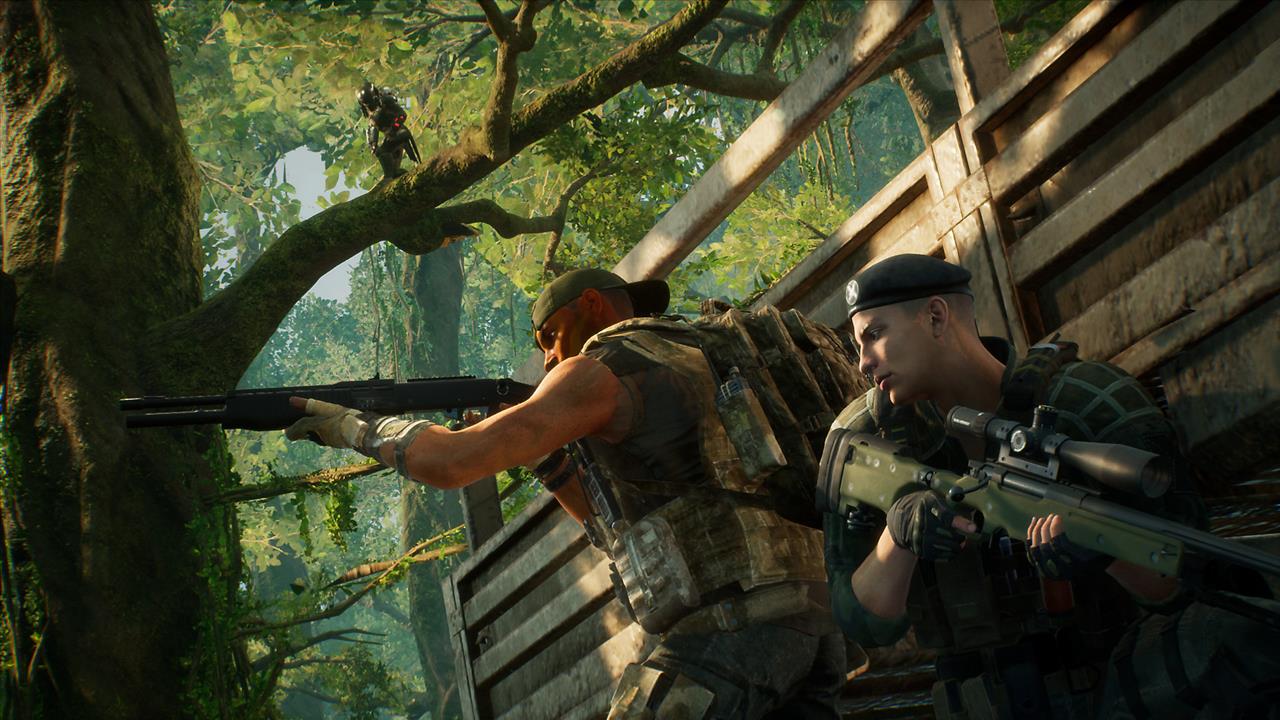 And yet, as much as I am kinda down on the lack of scope and difficulty in the game, it really does stick with you for a spell. I played my first match late one night and wasn't able to jump into my second until the next evening. I was thoroughly underwhelmed on the first bite, yet spent the greater part of that next day looking forward to getting back in, still thinking about. It absolutely nails the licensing and aesthetic of the 1987 film. This is a game that I've probably wanted to play for 30 years now even if I never realized or articulated it before seeing it for the first time. It has great potential and because most of the game is the interaction between the 4v1 and there can be unexpected and surprising moments. Particularly good Predators are actually quite hard to find. Too many lack the patience to even the odds slowly, rush in 4v1 and get taken down rather easily, and given the lengthy wait times I don't see that changing anytime soon until the number whittle down to more dedicated players as it is just too hard to get any good practice in as a Predator.

Which brings us to my most disappointing point in this review—it's also a game that never really teaches you how to play it. There is a single, short tutorial level where you get the basics of the Predator skills and movement. But there is nothing for the commandos. So all of these skills critical to your survival, spotting the enemy, communicating with teammates, using mud to cover your heat signature, none of that is ever actually presented to the player except by stumbling upon it watching someone else do it in-game who already figured out how. And in my experience those other players were few and far between. So the experience is mostly five people stumbling through roles they don't fully understand with tools they don't fully know how to use over and again. 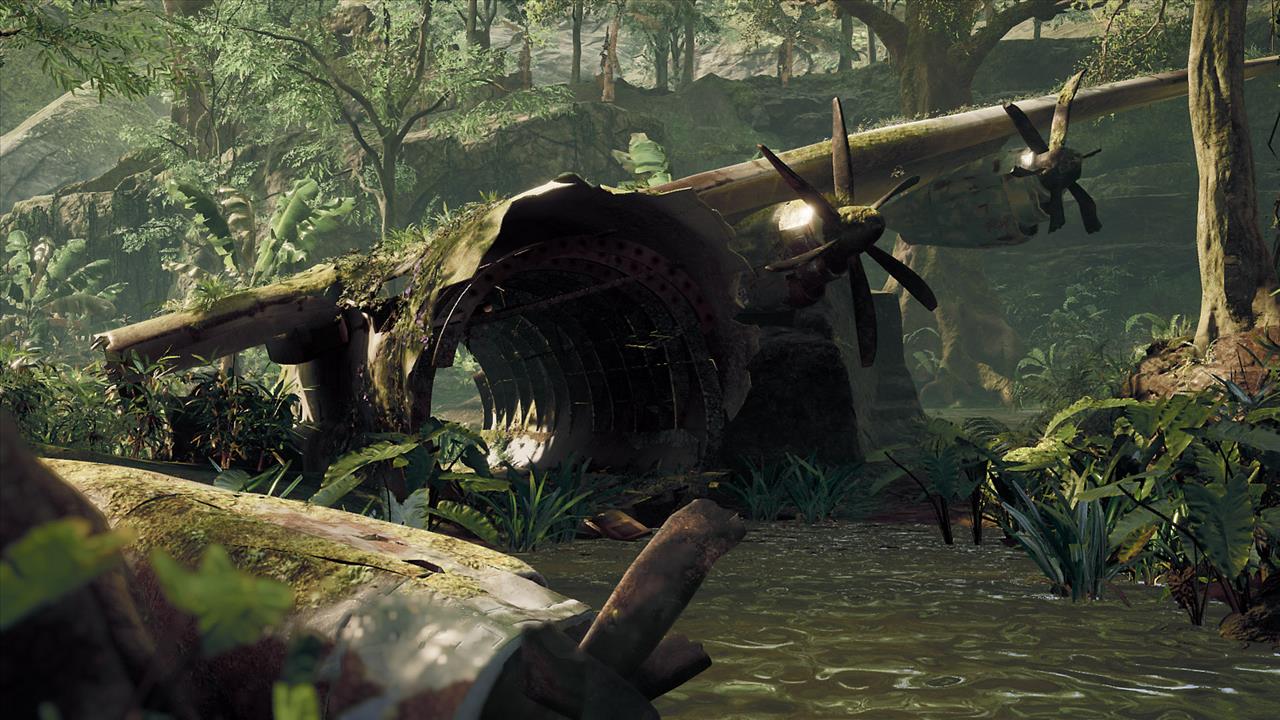 This is where the game falls flat. It has the licensing and feel down to a tee even if the visuals and gameplay are pretty standard for a first-person shooter. It's not the amazing movement and gunplay experience of the best of breed, but I never felt anything about the visuals or shooting ever got in the way. It's more than adequate, but throw in a few single-player missions to actually allow players to get the basics down. Even if it's just a token five-hour campaign, it would be something to help justify the $60 price tag. Teach us how to spot the enemy with the up button on the D-pad. Teach us how to use mud to cover our heat signatures. Give us an endgame true to the seminal film, let us whittle our opponent down through the missions and showdown int he final act with a trap-laden battlefield where the tables are finally turned. Use more than the look and sounds of the film and actually grab from the plot what made it so great. Bud sadly, this is wholly lacking, an opportunity missed, and not even something on the DLC roadmap to be corrected. Because while Arnie's character "Dutch" is debuting with the first DLC, there are no new modes on that roadmap, just weapons and skins and background exposition in unlockable audio diaries. Turns out the game I have desperately wanted to play for 30 years isn't this one at all. This is simply one good game mode in a larger experience that isn't realized. Shame.

With that in mind the more forgivable warts become less so. The UI in front of the customization options are a frustrating nightmare. Sure you can "save" loadouts but it must be said with air quotes because make the slightest change to your loadout, even just peek at an alternative option and everything you've previously saved is gone. Your character's look, skins, weapons, perks, even the entire loadout itself were each at last once and most on multiple occasions gone from my collection. Any kind of experimentation, even browsing the newly unlocked cosmetic options will delete your previous settings and having more than one save slot for loadouts is locked way too deep in the leveling system. Want to see that new shotgun you've unlocked? Prepare to have your sights, mag, and skin on the handgun you actually want to keep completely reset to default as soon as you exit out of the shotgun menu whether you've made a selection or not. You will long be frustrated to your wits end before you even unlock that second customization slot. 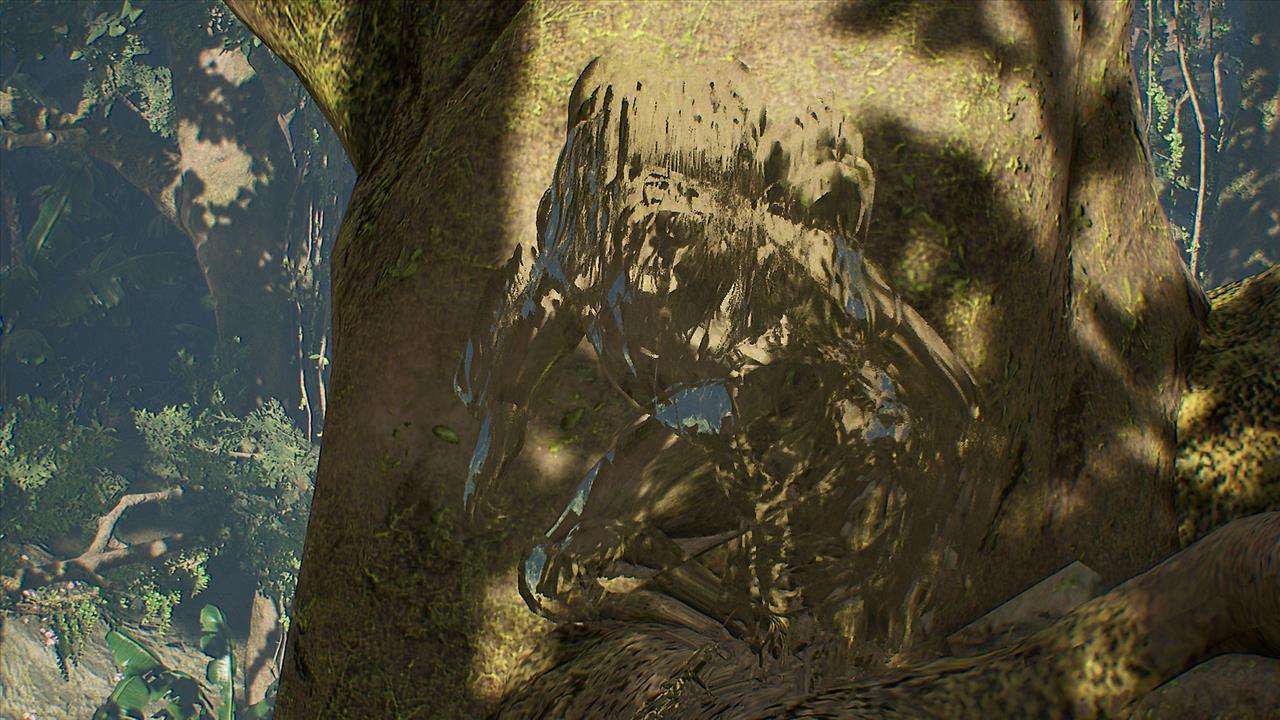 Then the notification system for newly acquired items is janky beyond forgiveness. New items from level ups and loot boxes are highlighted with an orange notification that is meant to disappear, however there is no direction where to find these items once you are in the UI except in broad strokes. You have to basically to drill down into every menu and search for the new stuff before hovering over the item and clearing the notification. If that even works at all. Some new skins, like on my uniform never cleared, rendering the entire notification system useless. I will forever be notified of my "new" uniform skins that I've tried to clear a dozen times, clogging the entire system when I actually do get something new to check out. Maybe there is one more game mode than 4v1, its the useless little whack-a-mole mini-game of trying to clear your annoying notifications.

It's a shame in the end. There is a very good core gameplay loop but it's surrounded by a janky mess of an interface and there just isn't enough in the loop to keep pushing you to play more and more. Aside from mindlessly playing to get XP, there isn't a challenge loop either. Maybe if the game actually promoted weapon mastery to unlock new items and skills it might be different, but it doesn't; and there is nothing in the gameplay itself to push the FPS genre on its own. Predator: Hunting Grounds is a solid foundation for a great game in the making, but lacks the polish around what it does offer, and stops well short of a complete and finished product to justify a full price AAA tag.

Perfectly capturing the feel and look of the nadir of a 30 year-old-franchise, there is much to like about the single-minded offering of Predator: Hunting Grounds. Unfortunately, however, that joy and nostalgia is soon lost in repeating the same, limited experience ad nauseam, and doing so around a frustrating user experience. It's not a bad game, and is fun for a weekend, but it doesn't offer enough to justify it's price tag. This whole 4v1 experiment seemed to have already been tried and failed with the much more ambitious Evolve. I can't see how slapping the Predator franchise logo on the same concept is really going to keep a player base going.