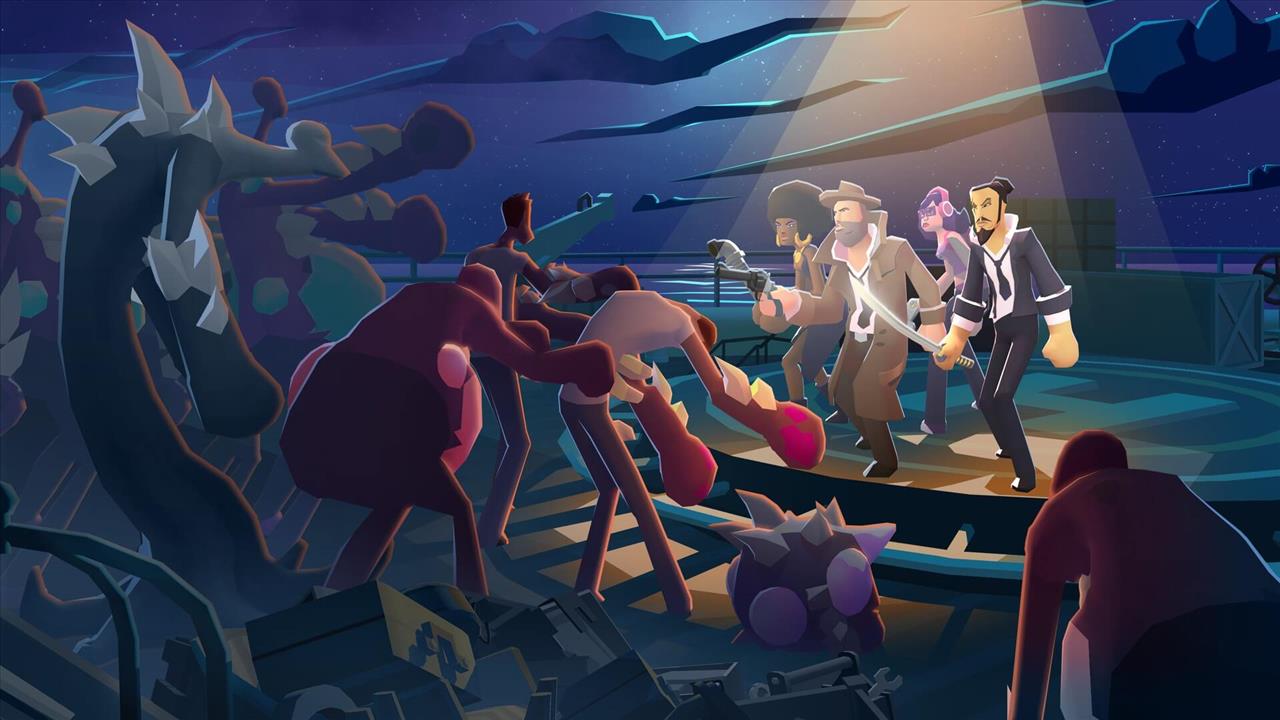 This is officially the last time I start a review for a game by Zen Studios by reminding the reader that Zen is the studio “best known for their digital pinball platform Pinball FX3.” Zen Studios has been on a streak lately, releasing a succession of games that have nothing to do with pinball. With the release of Dread Nautical (directly following the excellent Operencia: The Stolen Sun) the studio has shown that they can develop and publish excellent games, regardless of the genre. I’ve always enjoyed the pinball games, but it seems that Zen can harness the powerhouse addictive gameplay they are known for and embed it into any number of gameplay formats.

Dread Nautical, for example, is wildly outside of anything I would have expected from Zen Studios, but here we are. I suspected that this tactical strategy game would be good – just going on the studio’s track record – but I didn’t think that I would enjoy it quite as much as I did. There has been a glut of tactical strategy games on the market over the last couple of years. After XCOM uncorked the dam, the metaphorical town has been flooded with tactics. But here, floating on the sea waters above the fray, is Dread Nautical – finding interesting ways to differentiate itself from the flotsam below. 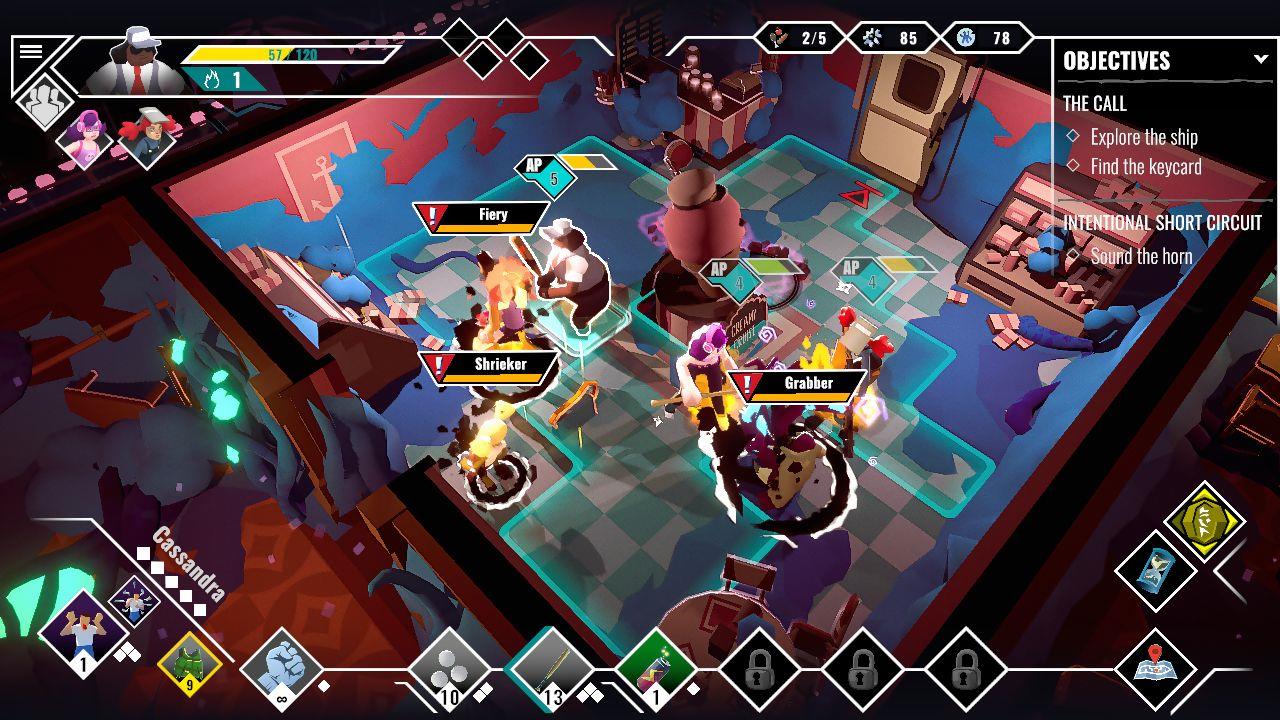 For starters, Dread Nautical has a great story concept. Cosmic occurrences pull a cruise ship off course, landing it in (maybe) another dimension. Most of the crew and passengers have been turned to Lovecraftian horrors. The player character (you have four to choose from) wakes up in the hold of the ship with a sore head and some videogame-grade amnesia.

It seems that a crew member named Jed has established a small base in the cargo area, and he wants the player character to venture into the ship for supplies and information. The loop of Dread Nautical has players venturing up into the ship on an elevator, exploring floor by floor for weapons and food, while staving off attacks from the various ghouls wandering the casinos and showrooms. You can explore one procedurally generated floor a day, advancing slowly upwards through the ship. But it’s also cool to burn a day going back to previous floors to grind for goodies.

Along the way, your character will meet other survivors, some of whom are surprisingly reticent and unwilling to join the crusade for food and survival. Each character must be slowly recruited over a period of days through a series of speech checks and deeds. Once seduced down into the camp in the hold, they join an ever-growing pool of characters to choose from for your excursions. 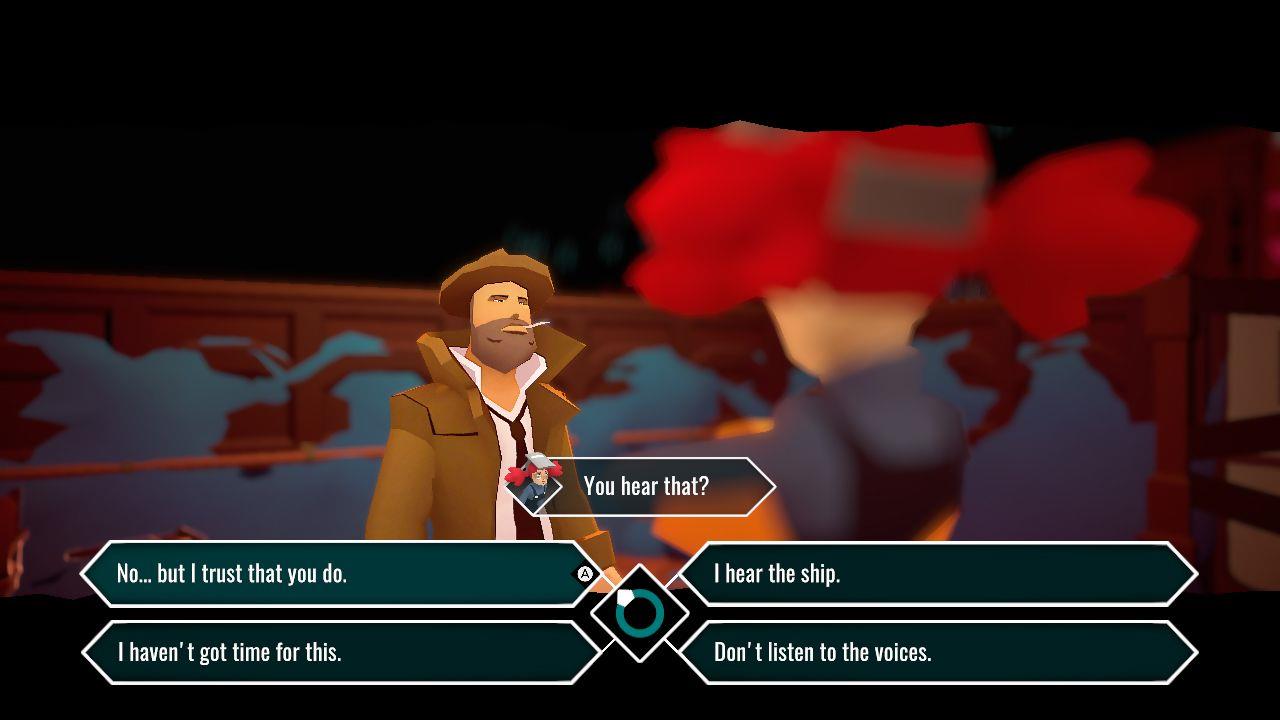 A number of cool systems are at play to keep you interested beyond the core exploration and battles. Weapons are found strewn about the ship in containers, and while they each have their pluses and minuses, you would do well not to get too attached to any of them. Each weapon has a specific number of uses, and once those uses run out, it’s into the trash heap for whichever beloved weapon you’ve been nursing along. Sure, there’s a mechanic to repair your weapons, but the resources needed to do so are likely needed elsewhere. And weapons are so plentiful, you have to learn to toss them aside – just like Link – and move on to the next one.

Each battle awards the player with several pieces of “scrap” and “runes.” Scrap is used for building out your base – adding beds to house more characters, and creating stations to visit between excursions to prepare your team (and repair your weapons, if you don’t trust the game to provide you with new ones).

Runes, on the other hand, are used to build out your characters. In an interesting alternative to the standard experience point system, players can spend runes to build out a variety of stats. Need more inventory space? Finding yourself short on action points? Want to create a hit point-laden brute? Runes are the key to customization. The degree of versatility this allows is pretty awesome. By sinking runes into different aspects for various characters, you can create a nicely rounded party. I ended up making my main guy into a tank, and turned a few others into DPS-dealing brutes. I would use my main guy to take on enemies face to face, and slide in the other folks around the enemies' flanks for some of the ol’ slice and dice. 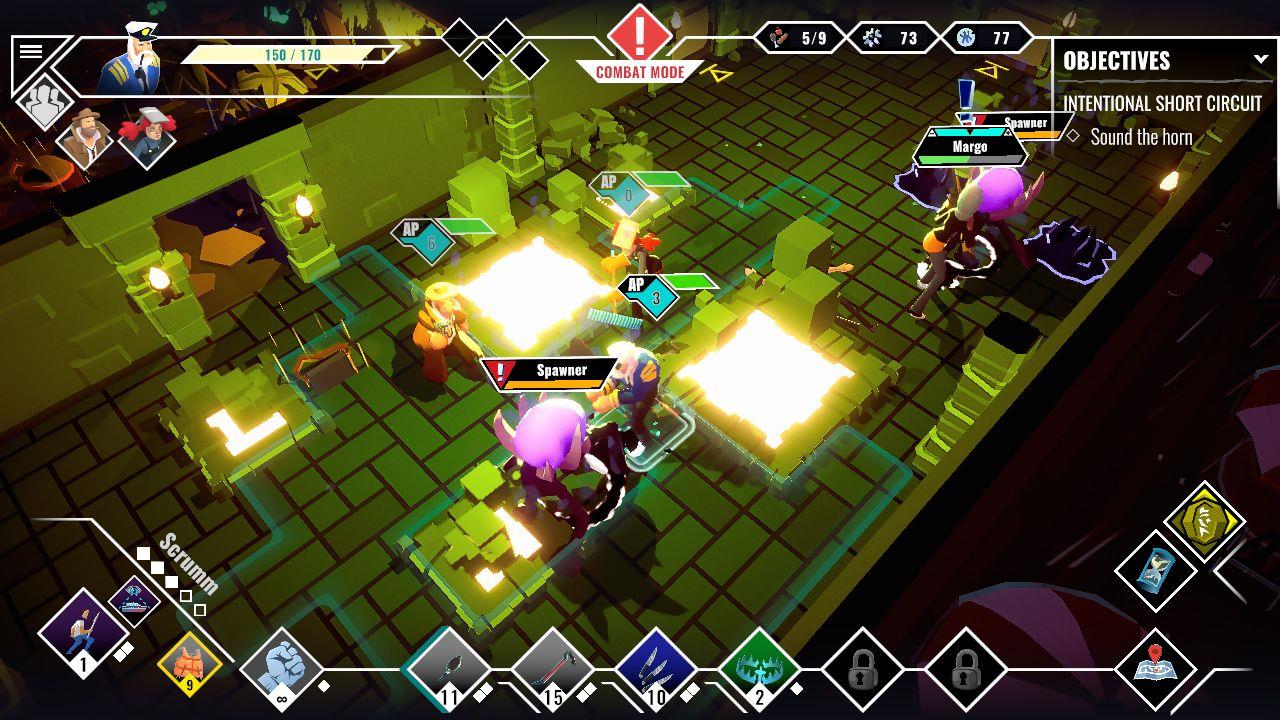 The battle system is pretty much what you would expect from a game of this nature. You guide your team around the ship with a little reticle, which can be a bit finicky, and when you get too close to any of the enemies that lurk in about 50 percent of the ship’s rooms, a battle ensues.

Battles use an action point system, limiting your mobility and number of attacks fairly severely, at least until you sink some runes into the system. Weapons have different AP demands, meaning that you can either lean towards low damage but multiple attacks, or vice versa. You are able to swap weapons on the fly during battle, which allows for some versatility depending on what you are currently lugging around. 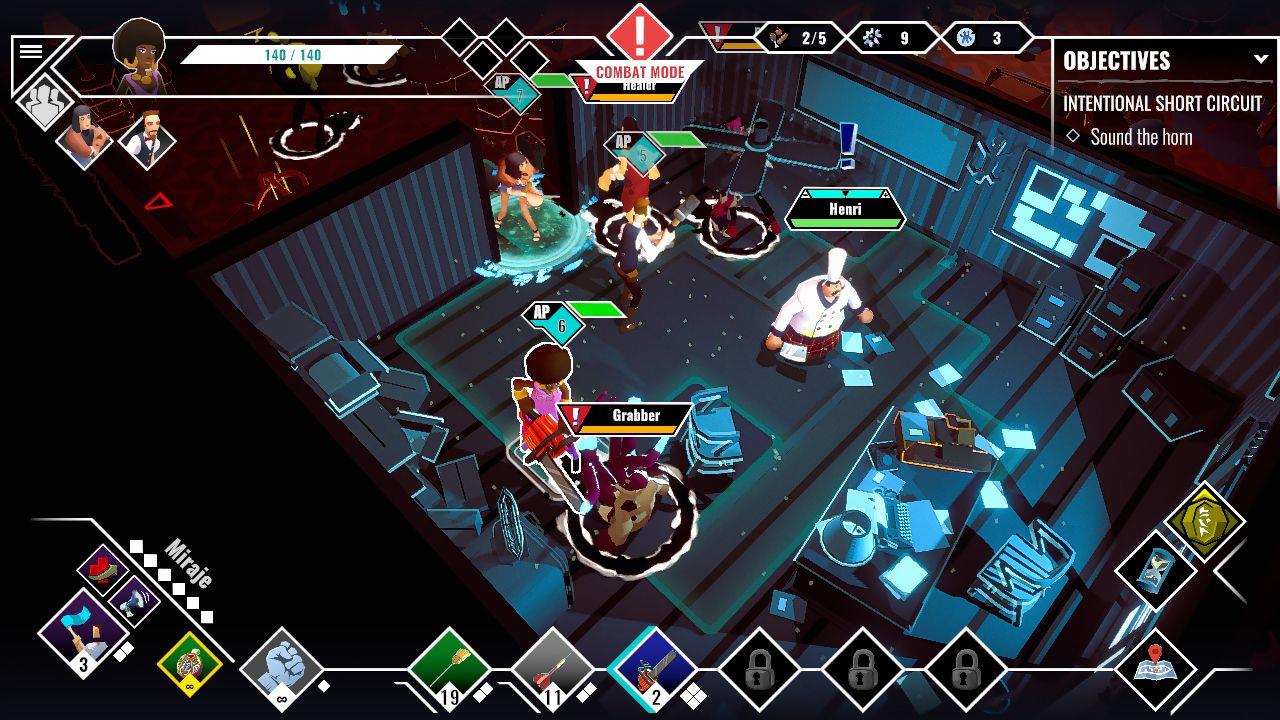 I don’t want to say that Dread Nautical is easy, but I didn’t have many problems with the game on Regular, which, to be fair, is the lowest difficulty setting. I found that I was stumbling across healing items at a regular rate to keep my team on their feet, and I had spare weapons coming out of my ears. About half of the time, I was able to sneak up behind enemies, unleashing devastating backstab attacks before they even knew I was there. There is a steady escalation in difficulty as the game progresses, but your team, if you are sparing any thought towards managing them, should pretty much keep up with whatever Dread Nautical throws at you.

Dread Nautical began as a mobile game on the Apple Arcade, but it makes the transition to the Switch well. If there are any touchscreen functions, I did not use them, relying instead on the standard analog-stick/button configuration. The visuals do suffer a bit when blown up onto a giant TV, but in handheld mode the graphics look crisp and clean – so long as there aren’t too many enemies on the screen. In some cases, when the action gets heavy, things tend to blob together a bit, making it difficult to see the action in detail regardless of which screen you’re using.

But beyond the somewhat muddy graphics, I had a great time with Dread Nautical. With an original story and a horror theme that never takes itself too seriously, Dread Nautical is a surprisingly breezy good time. Each floor takes between five and 15 minutes to traverse, making it perfect for shorter play sessions. I enjoyed picking up Dread Nautical to cruise through a few floors before bed – though the Lovecraft-on-a-boat themes made for some pretty weird dreams.

Hardcore fans of tactics games may find Dread Nautical a bit on the easy side, but most casual players shouldn’t hesitate to give this one a spin. I guarantee you’ve never played through a story like this one, and the gameplay hooks are strong enough to keep you locked in for the duration. Zen Studios have proved once again that they are an indie developer to be reckoned with. I can’t wait to see what they do next.

Dread Nautical is a solid tactics strategy game with a very unique story. Though the game was developed originally for mobile devices, it makes the transition to consoles cleanly. With tons of character customization options and non-irritating procedurally-generated level design, Dread Nautical has enough meat on it to justify several playthroughs. Tactics fans shouldn't hesitate to pick this one up.