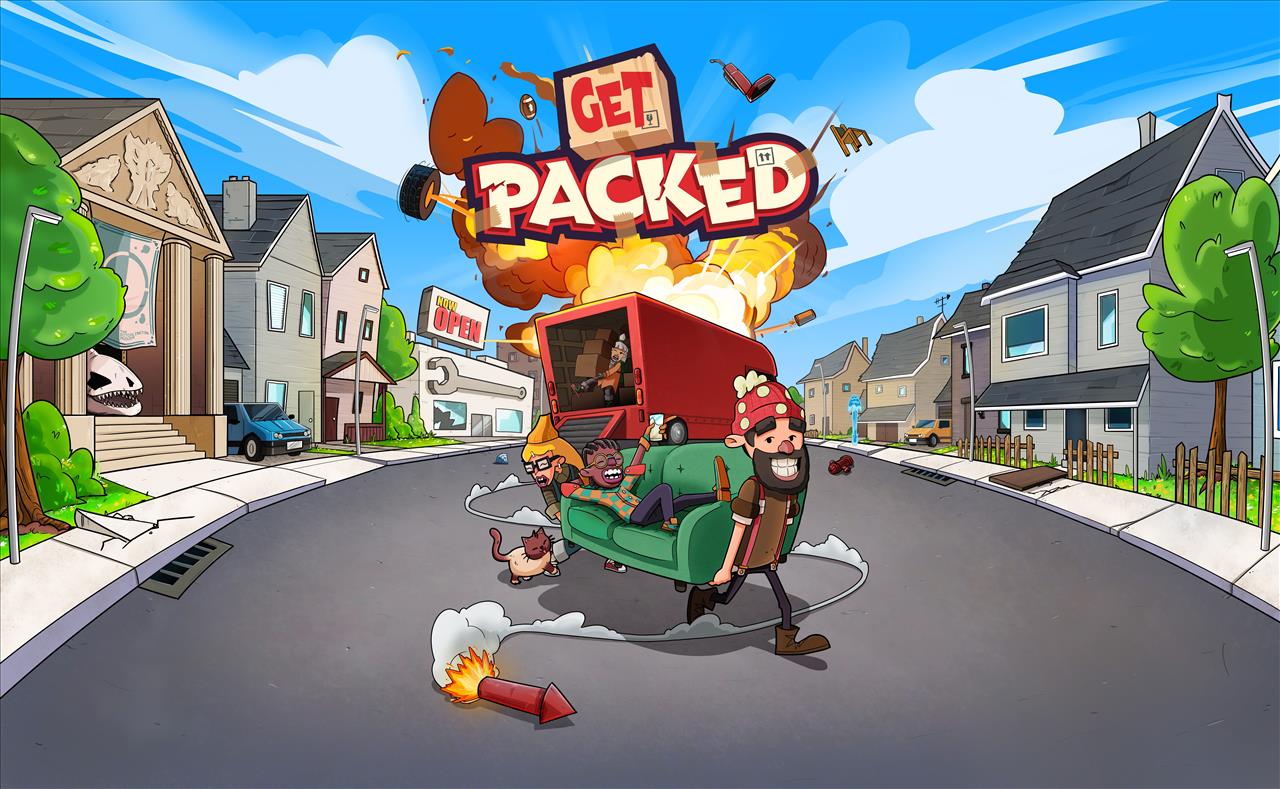 Of all the First on Stadia titles, Get Packed is perhaps the most hotly anticipated. Moonshine Studios' debut game has captured the imagination of the Stadia community, and for months fans have been chomping at the bit to get their hands on this wildly chaotic multiplayer thrill ride. In the comments on the Stadia Community Blog, players are already reaching out to each other to set up multiplayer sessions for this hilarious-looking game.

For those new to Get Packed, the game involves the poor employees of Last Ditch Removals, who are forced to relocate an entire town when it is bought out by an evil salt mining company. "Relocating an entire town" in this case translates to "running around and smashing a bunch of stuff while trying to get it into a moving van." A recent press release described Get Packed as "a couch co-op removals game full of calamity and physics-based carnage for one to four players. Fusing Overcooked style frantic fun and Gang Beasts inspired elastic physics, you and your rubber-limbed removal team help the citizens of Ditchlington relocate as fast as you can."

U.K.-based Moonshine Studios' 3D Artist and Co-Founder, Callum Taylor, kindly took a few minutes to chat with Gaming Nexus about the studio's origin story, the development of perhaps the wildest multiplayer game this year, and the technical advantages of developing a game for Stadia.

Please tell us a little bit about Moonshine Studios. How did the team come together?

Moonshine Studios came about thanks to a Cornwall-based incubation program called Launchpad, designed to establish local tech companies. Jamie, Marcus, Graham and myself joined the program in 2017, all from different backgrounds and all strangers at the time. It was a great opportunity for us all to make a fresh start and grow our own company…and was obviously a massive leap of faith.

Fortunately, the team had fantastic chemistry from the get-go. We all had complementary knowledge and skills from different game design fields and found the whole process really enjoyable. The program was a wild ride and we quickly created the prototype for what would become Get Packed. With the addition of our wonderful animator, Jen, and the tremendous support from Coatsink, we were able to establish ourselves as an independent dev studio with four co-founders.

Get Packed has been in development for a little less than two years. During that time, you have started a company, spun up your team, and developed a very polished-looking game on a brand-new platform. What obstacles did you overcome to get all of this done in such a short time?

One of the biggest technical obstacles was ensuring that Get Packed included online multiplayer. It was a crucial element we knew we wanted from the early design stages, but also an enormous – perhaps unreasonable – ask for such a small indie team, particularly with physics-based gameplay. Luckily, our prototype piquedd the interest of indie developer and publisher Coatsink and, with their online multiplayer expertise (having handled the online solution for Boneloaf’s Gang Beasts), they were the ideal pairing – not to mention Gang Beasts being one of our main inspirations. We’ve been tremendously lucky and humbled throughout development of Get Packed to have had such amazing support from Stadia, Unity and Coatsink.

Could you explain the basic game loop in Get Packed?

Simple. Grab items, get them into the van, then send the van on its way. Of course, things quickly become complicated as you realize almost everything you need to shift is destructible, volatile, explosive, fragile, or actively trying to escape. Even your teammates can become a hindrance as they manically rush around in Campaign Mode.

Things are even more straightforward (and chaotic) in Destruction Mode: find a thing, smash a thing. In fact, smash all the things. Smash things until you run out of things to smash. It’s pure destructive joy. The company van is still present, but now brings you a selection of new destructive tools, ensuring you never run out of creative ways to smash stuff.

Meanwhile, in Versus Mode, players will have a van each and must compete against each other, all operating from the same house. This is where stealing items off other players becomes an entirely viable tactic.

Throughout the development of Get Packed, we focused on a simple premise: present the player with a simple task, then throw in as many chaotic complications as possible. And while teammates can certainly make packing a lot quicker, they often create a whole new obstacle. 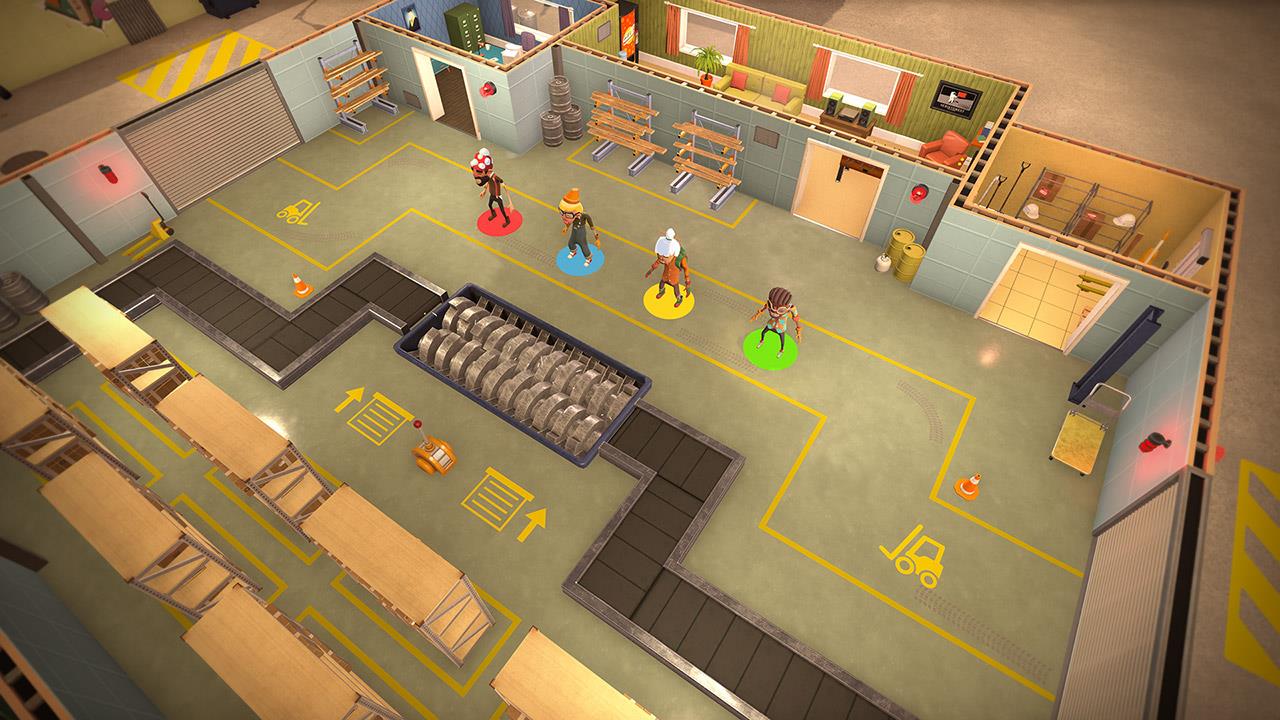 Get Packed has 12 very distinct levels, all with unique features that directly impact gameplay. Which is your favorite level? Is there a piece of level design that you are particularly proud of?

I’m a glutton for destruction, so I love the warehouse. The sheer amount of destructive potential of the forklift is mind blowing...and that’s before we even talk about the giant metal shredder. It’s utter chaos. That said, I’m really excited for the new levels we have in the works for post-launch. I don’t want to spoil anything, so keep an eye out for the update.

Are there differences in the ways that the characters play? Do they have individual skills and weaknesses?

We contemplated this early in development but decided it wasn’t the right fit for the experience. We’ve striven to make Get Packed as accessible as possible to all players, regardless of age or gaming experience, and the inclusion of an asymmetrical skill set seemed unconducive – having to consider all manner of variables prior to gameplay. So we decided to keep it simple, with all characters behaving the same...including the unholy strength to one-handedly deadlift a fridge.

Get Packed is probably the highest profile “First on Stadia” title to be released so far, with a great deal of anticipation and enthusiasm from the Stadia community. Could you describe how your relationship with Stadia started?

That was actually a happy accident. We began work on Get Packed in 2017, just keen to make a family-friendly co-op multiplayer with no specific platform in mind. After creating our initial prototype, we partnered with our publishers Coatsink the following year – an indie developer and publisher in the north of the U.K. Shortly after, Coatsink’s CEO, Tom Beardsmore, was introduced to the team at Stadia and took the opportunity to showcase a few upcoming titles. And just like that, the Stadia team fell in love with Get Packed. The level of support we’ve received from the Stadia team ever since has been incredible. 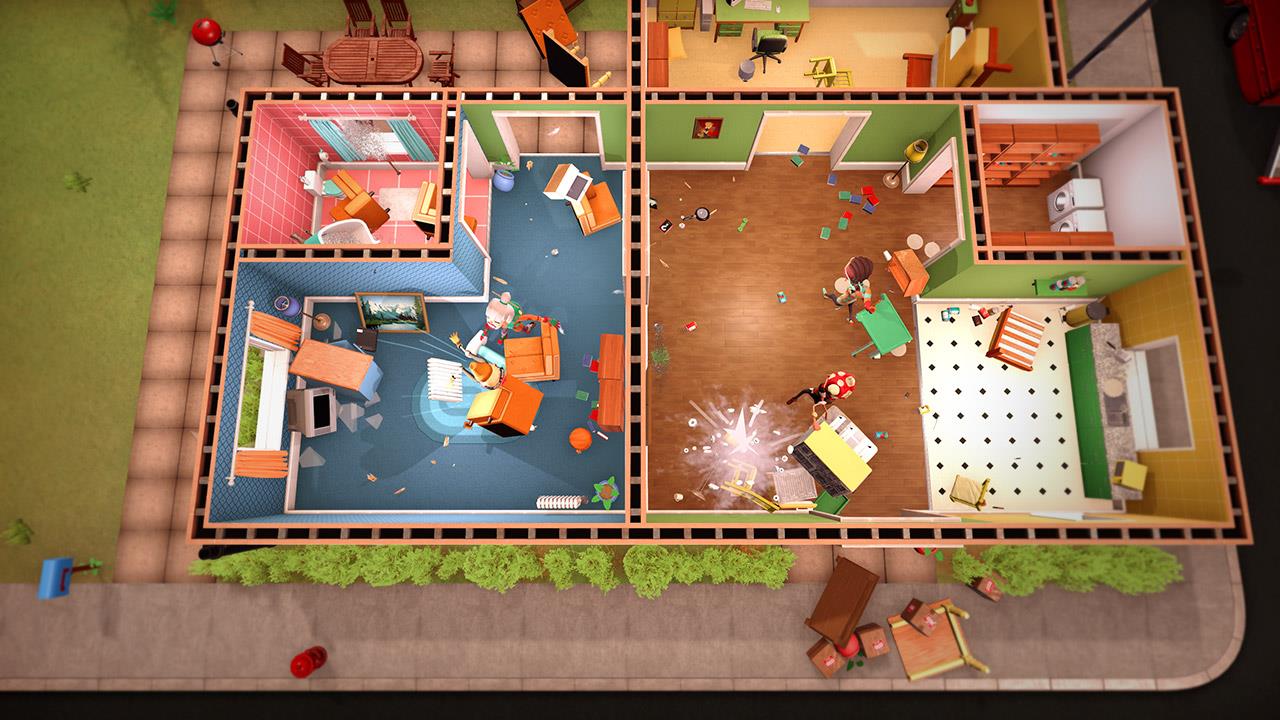 What are some of the benefits to developing on Stadia?

Working with Stadia has been an amazing experience. Unity has fantastic integration, so the whole development cycle hasn’t been too dissimilar from that of a console game. However, thanks to the power of Stadia, we’ve been able to push the graphics and wacky physics that much further.

During development (pre-Stadia) we encountered a number of challenges. Get Packed is played from a birds-eye perspective and often you can see the entire map. This is a huge area to render, exacerbated by the sheer amount of physics objects which can be manipulated by the player. Knowing the specifications of the target hardware was incredibly useful, allowing us to pack each area to the limit without affecting performance.

Accurate lighting was another challenge pre-Stadia development. Baking the lighting would’ve been the ideal solution, and would have allowed for faster render times, but with all the movable elements it became clear that real-time lighting was the only viable solution. Even then, it was tricky balancing the requirements of the shadow system with the destructible meshes and explosions. It looks great, but that level of chaos began to push the hardware.

Fortunately, these limitations pretty much evaporated when we focused on Stadia development. Thanks to the power of the Stadia servers, we could push the wacky physics and gorgeous lighting much further than we anticipated. 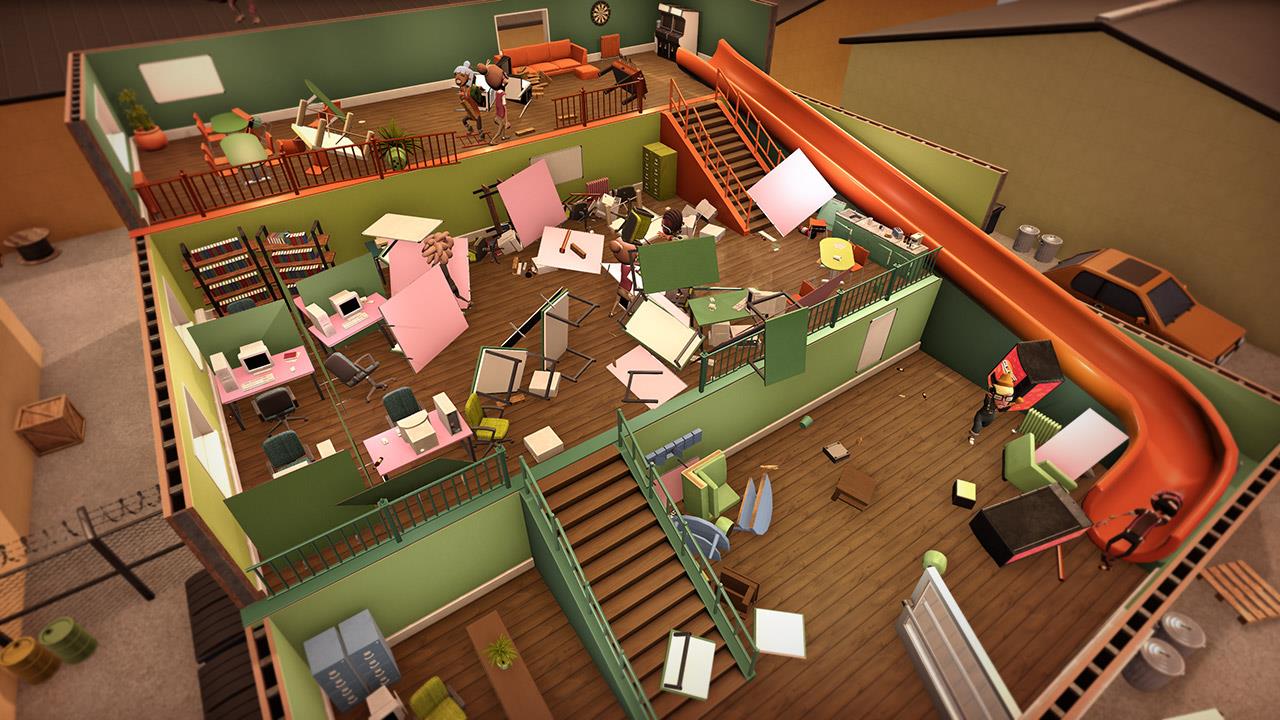 Every promotional video for Get Packed ends with the phrase: "And, as always, Ditchlington." What on Earth is Ditchlington?

Ditchlington is the fictional city where Get Packed is set. It’s home to our unlikely heroes, the Last Ditch removals company, and all their respective clientele. It’s an unusual town with a rich and proud history; imagine an Americanized version of Cornwall and you’d be close. (Fun fact: the Ditchlington Mayor has a phobia of doors, which is why you don’t see too many.) Players will be tasked to save Ditchlington from the sinister Industrial Salt Corporation, which has bought up the whole town to build an enormous salt mine. Last Ditch removals must pack up every home and business to make sure it’s citizens are safe...and devise a cunning scheme to stop the city from being demolished.

Gaming Nexus would like to sincerely thank Moonshine Studios and Callum Taylor for their participation in this interview.

No official release date for Get Packed has been announced, but "coming soon" is starting to feel pretty darn soon.