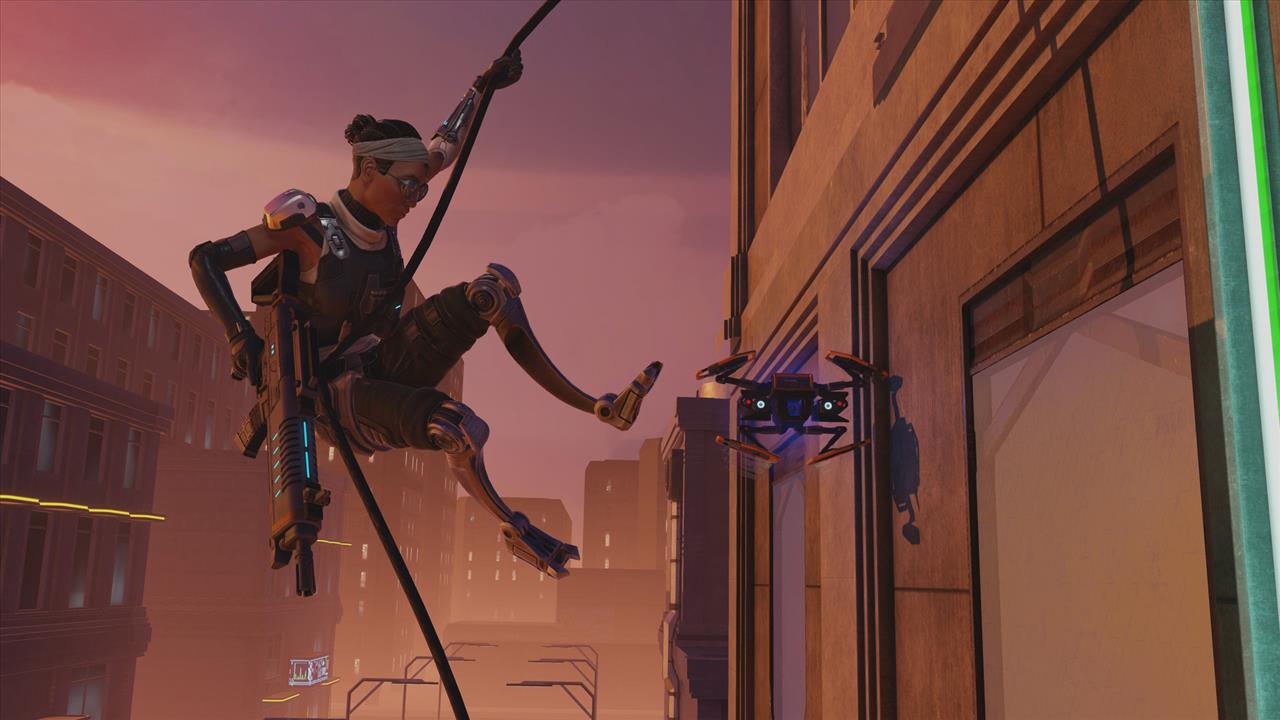 When I’d typed Chimera Squad’s Latin motto, “Diversis Viribus,” into Google Translate, I’d misspelled Viribus. Instead I’d typed Veribus (with that first “e”), which translated altogether as “Different Sputters.” I’d laughed, but I’d gone with it, knowing I’d have a little rust to shake off since XCOM 2: War of the Chosen. Maybe that’s what the sputters were.

There isn’t a “3” attached to the end of the name, but Chimera Squad is 100 percent XCOM. But it’s tighter. It’s faster. It’s focused. All of it makes for a good season’s worth of spinoff material.

Your area of operations covers City 31. This could be some misnumbered homage to Half-Life’s City 17. Prime numbers are hot in the video gaming space, I’m sure. Instead, I think it’s a tribute to Baskin-Robbins. You know, Baskin-Robbins 31 Flavors of ice cream? One of City 31’s big talking points--along with the titular Chimera Squad--is that its population is diverse. Like Baskin-Robbins’ 31 flavors. While diversity is better and stronger, it’s no cakewalk. City 31 is trying to build itself up while not tearing itself apart at the same time.

Your four-person squad is dispatched to assist the City 31 Police Department in rescuing the mayor. But our motley crew is congratulated when the operation goes well, but then implicated when the post-op goes sideways. Were you a bad enough dude to rescue the mayor? It appears the answer was yes, but then no. 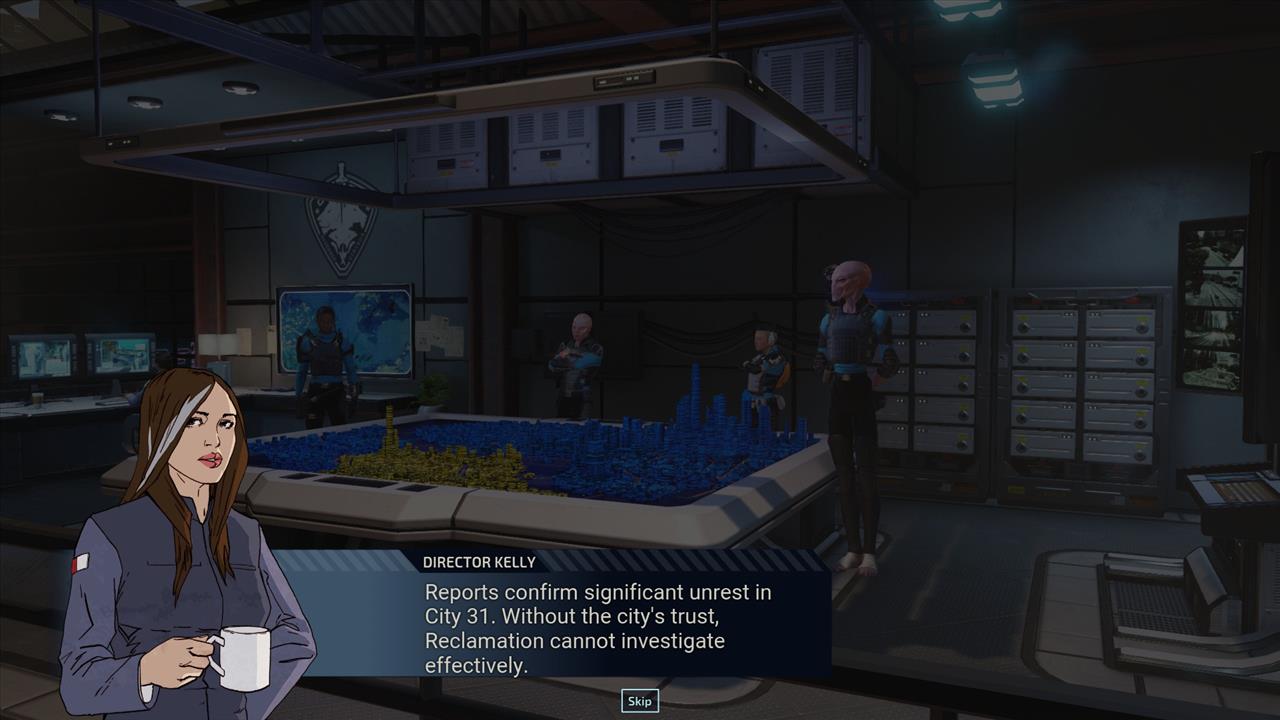 Chimera Squad, in its own way, exercises less subtlety than regular XCOM squads. You aren’t painstakingly setting up ambushes (that always seem to fail). Instead you’re stacking up at a point of entry and going in weapons hot. You set up who’s first, second, third, and fourth, shuffling the order depending on randomly shifting circumstances behind those doors, and yell, “Breach, breach, breach,” as you kick in the door, waving the .44--or assault rifle, shotgun, submachine gun, or what have you. Breach Mode never gets old, and a lot of missions call for more than one instance of Breach Mode to happen.

There’s an investigative element to the game’s three major chapters, at least in the narrative, not the gameplay, necessarily. Each chapter lasers in on a particular criminal faction found in City 31. You lay groundwork, knock out tangential operations, and then go in for a final takedown. This certainly takes several in-game days, potentially several weeks. The up-close tactical game, the turn-based strategy part that is signature XCOM at this point, is as good as ever. And while the 10,000-foot view covers a smaller patch of earth, it’s still a logistical balancing act of: hiring and training soldiers, researching and developing technologies, and implementing winning strategies across the city’s nine districts. 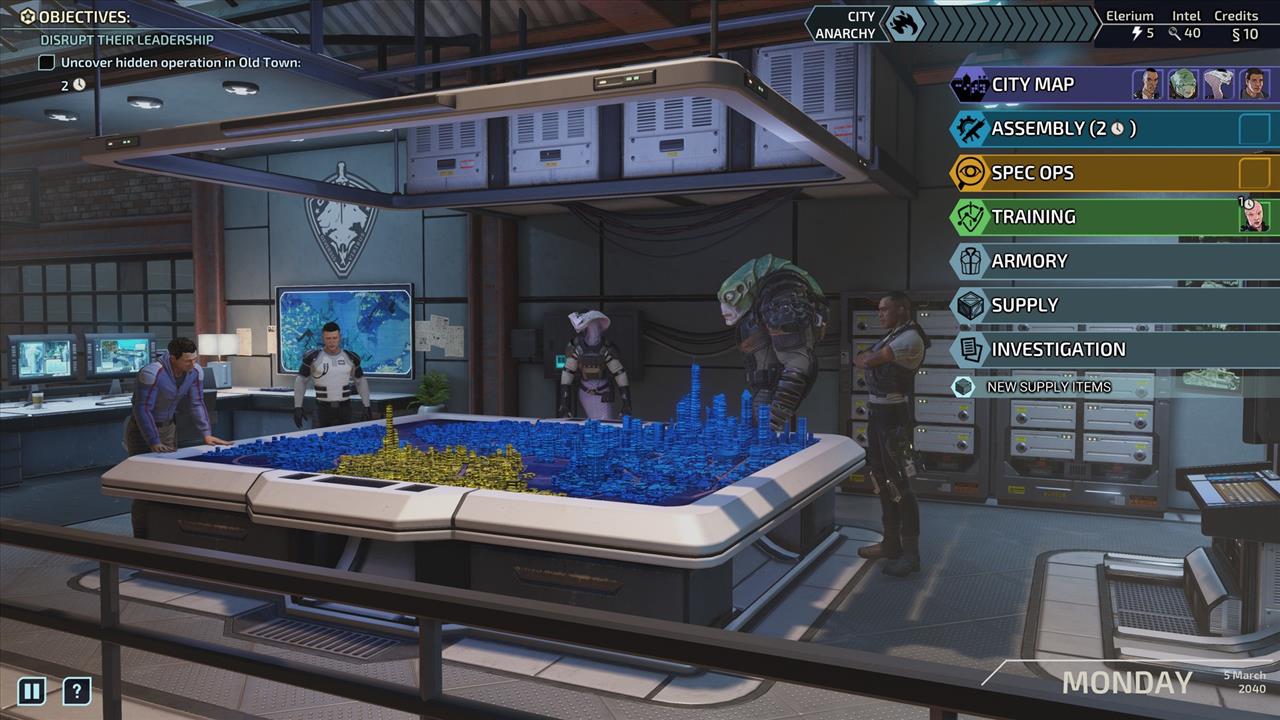 From The Fringe to Renova Heights, from The Stacks to Angler’s Point, your job is to lay down XCOM’s particular brand of law and order. Take your military specialists, make surgical incisions into your target’s nefarious intentions, and mess up their whole day. It’s nice work if you can get it.

I began one chapter with an investigation into a high-tech faction called Gray Phoenix. Those perpetrators raised a red flag the moment they started selling plasma weapons on the not-so-gray market. City 31 Police are too blunt of an instrument to pull off this kind of a sting. So 31PD hands jurisdiction over to Chimera Squad. The case is open, and taking down Gray Phoenix is my life now. With this contract in hand, Godmother, Terminal, Cherub, and our poster boy, Verge, are going to be eating well. 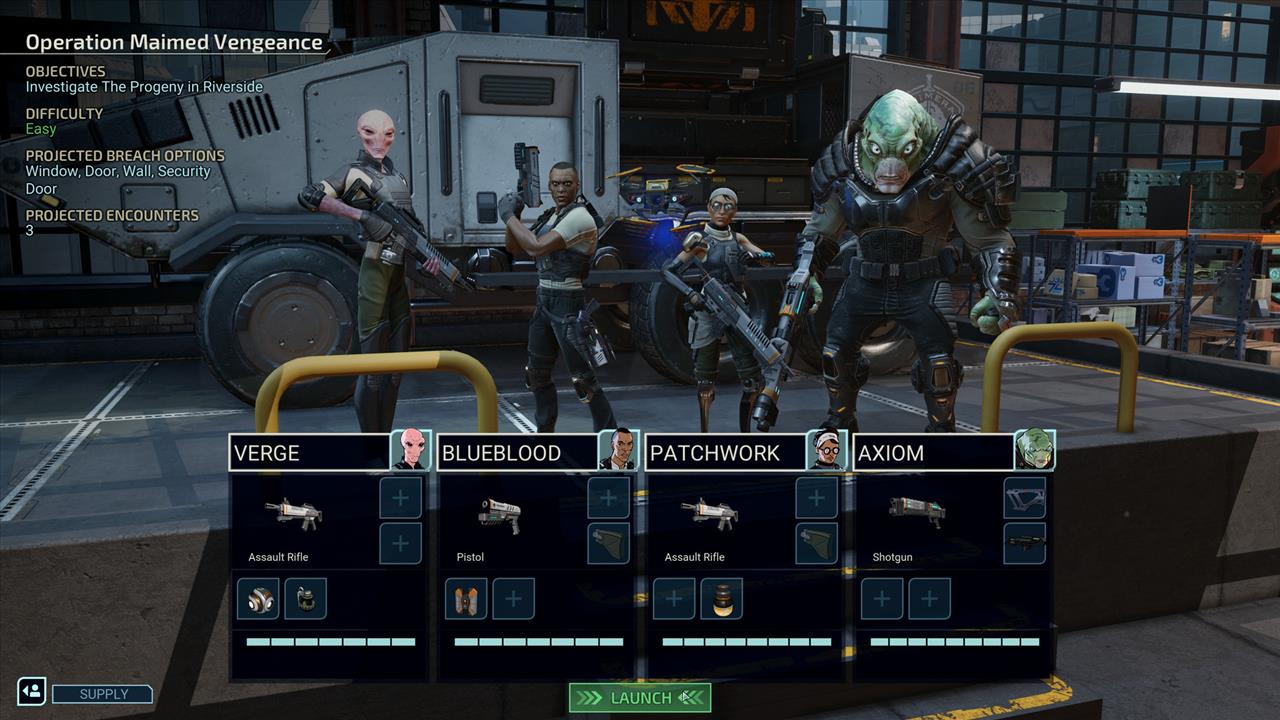 You know who’s having their lunch taken from them? The bad guys. By who? My racially diverse squadron of awesomeness. It’s almost unfair. The bad guys finally get to see what it’s like to go up against snake people and mind-controlling aliens. Not so much fun being on the receiving end of all those unfair tactics now is it, bad guys? That’s what I thought.

The mission-complete screens are underwhelming, I won’t lie, but at least they don’t take forever to load. Watching the Chimera Squad’s APC back into its parking spot at HQ is less of a heroes’ return than XCOM soldiers walking off their VTOL aircraft and dropping to a knee when they’re wounded, or standing tall when they made it through unscathed. But again, in Chimera Squad, you’re snapping back and forth to and from the action with a lot less downtime between. 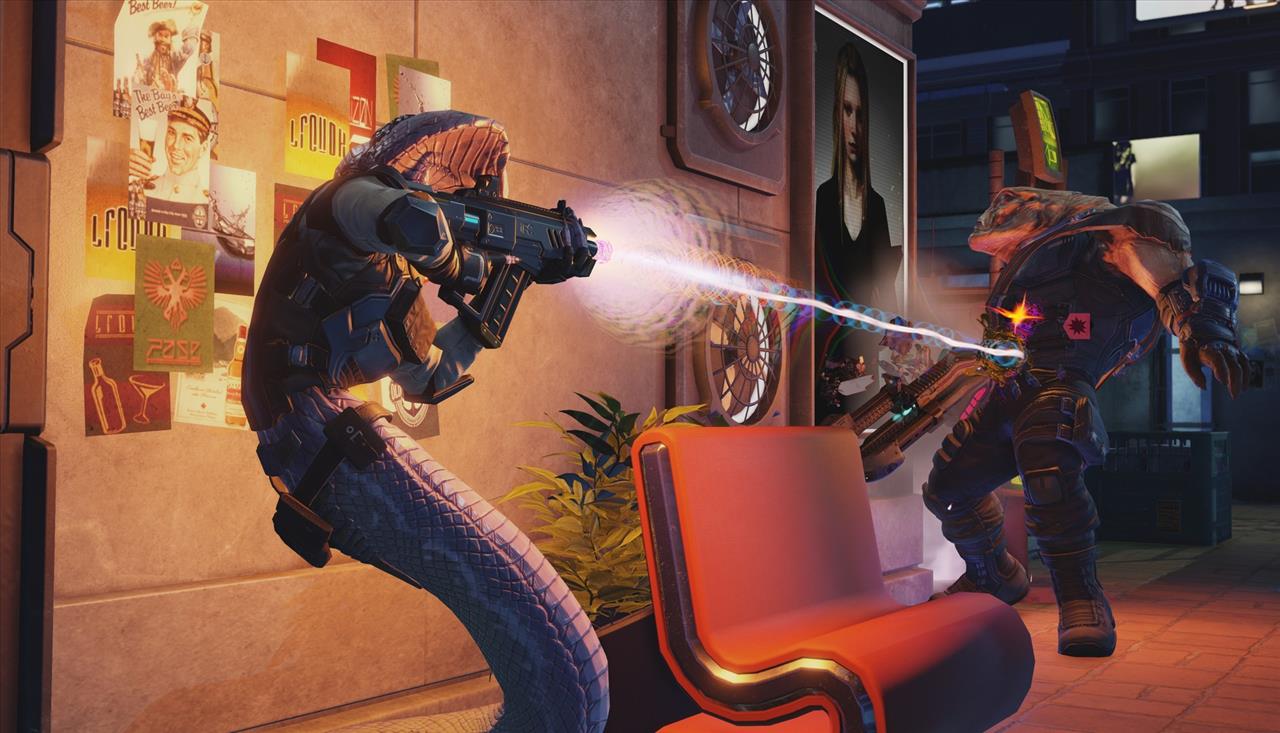 You lose a lot of customization along the way, I’ll also admit. You’re not picking facial features and wacky sets of armor; no top hats, no horse masks, no pink camouflage on your gun. You’ve got a bland set of 16 predetermined color schemes to flip through, and you can also choose their loadout. That’s about it. You’ll get to know your ever-growing squad by their developer-given names. I didn’t get to name my squad members after coworkers or Hollywood actors or anything quite so entertaining to talk about at work the next day. If I say Verge clutched the win for me on a grueling three-part mission, every other Chimera Squad player in the world will know exactly who I’m talking about.

On the one hand, you won’t be forming attachments to your characters in the way that previous XCOMs let you. I rather enjoyed yelling at Gaming Nexus Owner John Yan when his sniper whiffed another 95-percent-chance-to-hit shot. But sticking to a stable roster gives the script writers license to write more meaningful backstories for those characters. They can also prod each other on a deeper level in the cutscenes, rather than just bark military orders at each other on the field. 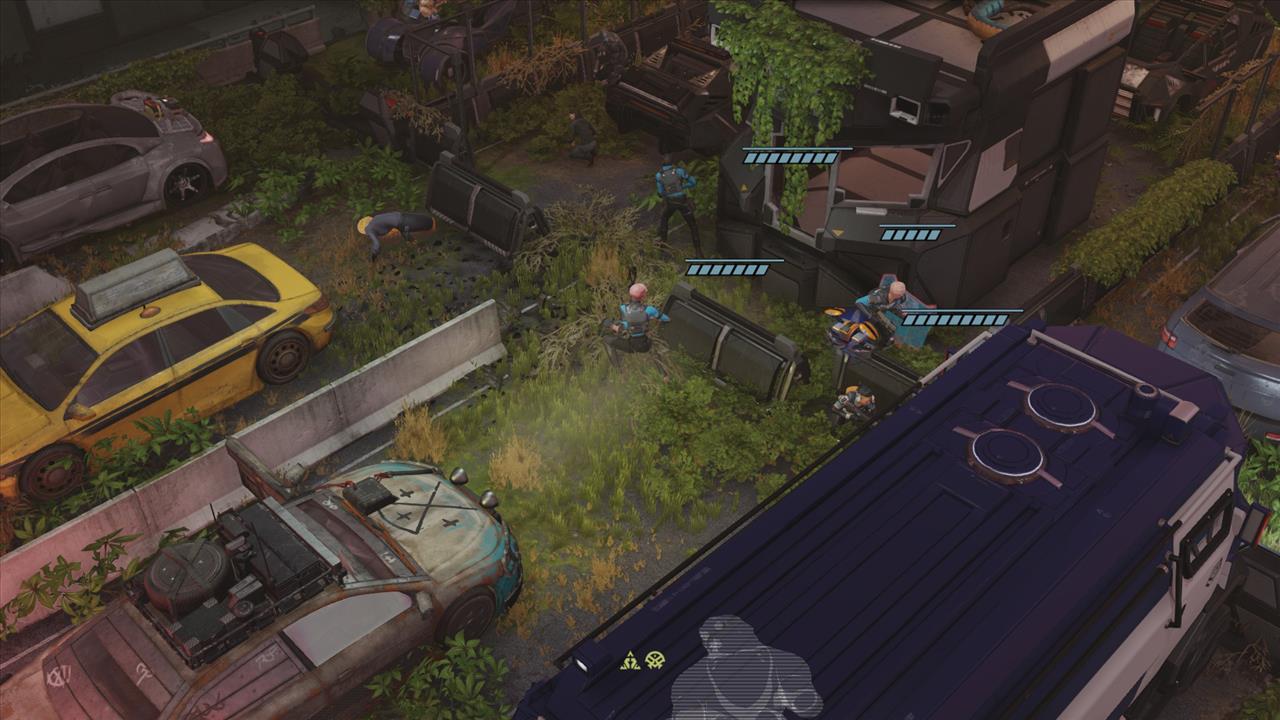 When a squaddie is gravely wounded in battle, they can earn scars. Sounds heroic, and maybe it is, but for you, it equates to down time and some (temporary) nerfing of their stats. But instead of stuffing them in the sick bay for a couple days, you stick them with training duty. They’re going to be hitting the books and getting healthy. Say goodbye to them for a bit. Assign their replacement to the APC and get ready to roll out. Time’s a wastin’.

On occasion, I don’t feel like I have all the necessary info to make a smart move. Take Dark Events, for instance. A screen pops up in front of me with two options: one, the Dark Event says Gray Phoenix ordnance has been calibrated for armor-shredding impact, and two, the Gray Phoenix has the supplies to arm and equip Praetorians. Now, while I don’t have anybody with extra armor, I know it’s something that can be researched and equipped on my soldiers; I get that. That Dark Even makes sense. But what’s a Praetorian? I mean, I’ve played enough Rome: Total War to know that a Praetorian is a high-ranking Roman soldier. But I don’t know what that means in an XCOM sense. 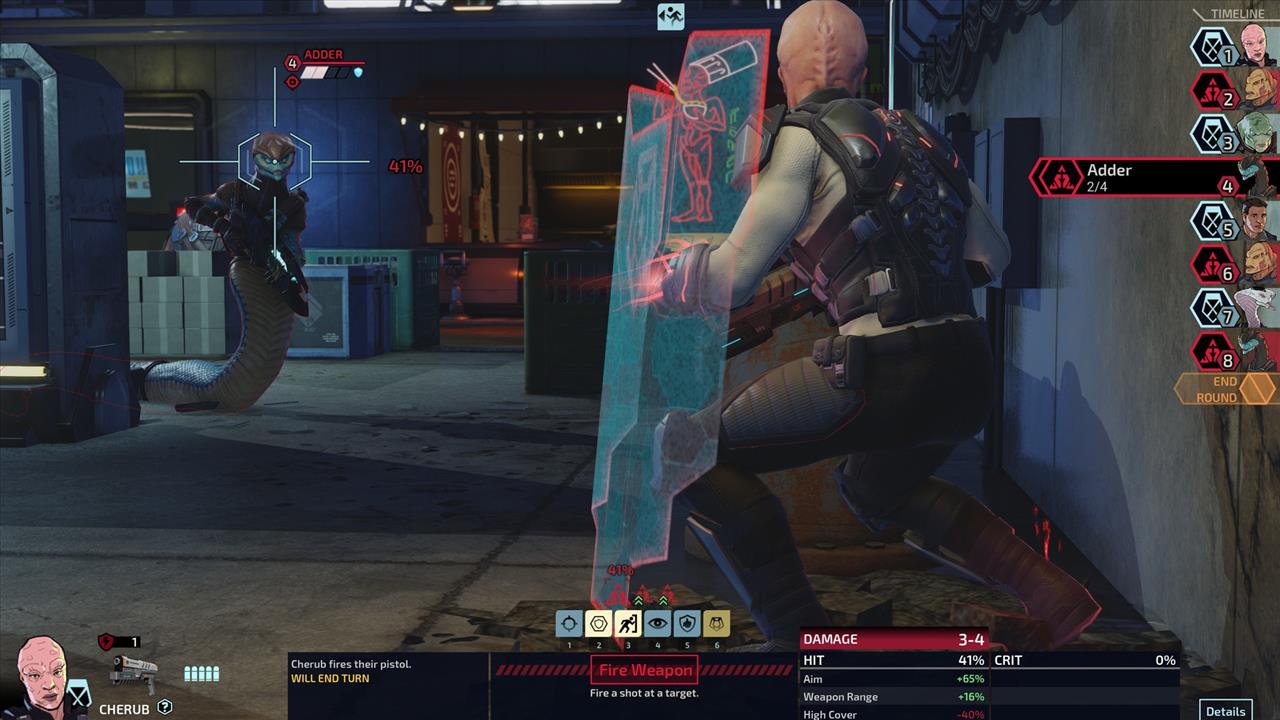 I’d soon find out, of course. But XCOM’s enormous glossary of enemy types? It’s not here. It’s nice not reading another 1,000-word essay on yet another alien type, but one or two more sentences stating that Praetorians were going to be the worst part of my day, every day, would’ve been welcome advice.

Chimera Squad isn’t cheerful, but it reins in the doom and gloom of the standard XCOM you’ve come to know and begrudgingly love. Chimera Squad’s HQ is brighter, the soundtrack isn’t as oppressive, and even the enemies’ voices have lightened up a little.

At times, Chimera Squad is a little too pared down. Like in Assembly (Research, basically), when it tells me that Improved Medikits will upgrade all Medikits to Nanomedikits--and that’s all it says. I understand that it’s better by virtue of the fact that it’s higher up the tech tree. But if it doesn’t tell me what these upgrades entail, and this is in a strategy game where such information is of paramount importance, how am I to know if it’s worth the three day’s research time? 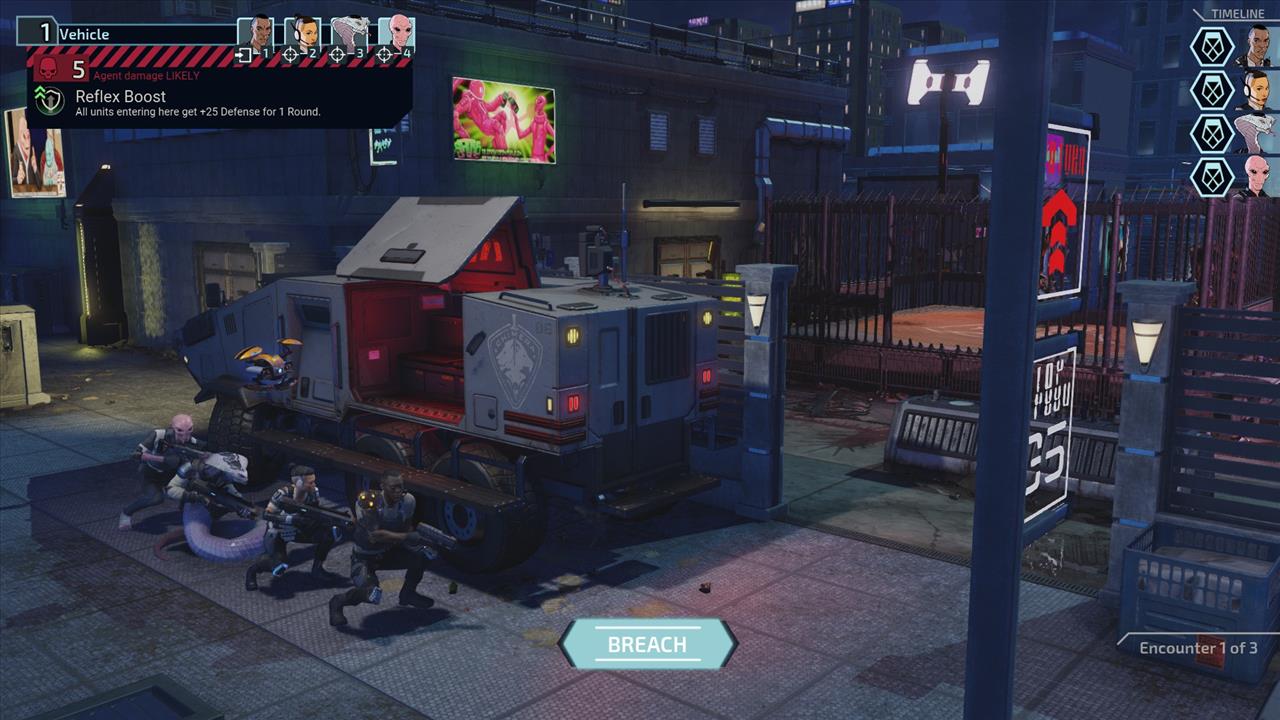 Either way, I understand it’s all done in the name of speed and efficiency. Keep it snappy. Move things along. I saw you nodding off while reading the encyclopedia, so that’s why we removed it. Wake up. To its credit, Chimera Squad is a wake up call, or at least a welcome weight-loss program. Your boy XCOM has lost a lot of weight, actually--trimmed a lot of fat, and he’s looking sveldt. You wonder why you broke up with him in the first place; you must’ve been insane.

I’m not going to slip out the back exit without mentioning a few requisite bugs that made it into the final code. Fixes are coming, of course. And I wasn’t able to make any of these bugs repeat. But I crashed to desktop at least once, losing a little progress on an end boss that I was losing to anyway. (Joke’s on you, crash report.) And a couple times the enemies’ turn seemingly froze so long that I thought we were all going on lockdown then as well. I’d say these aren’t game-breaking bugs, but they’re literally that, in a sense. Couldn’t keep me away, though, and that speaks louder than glitches. 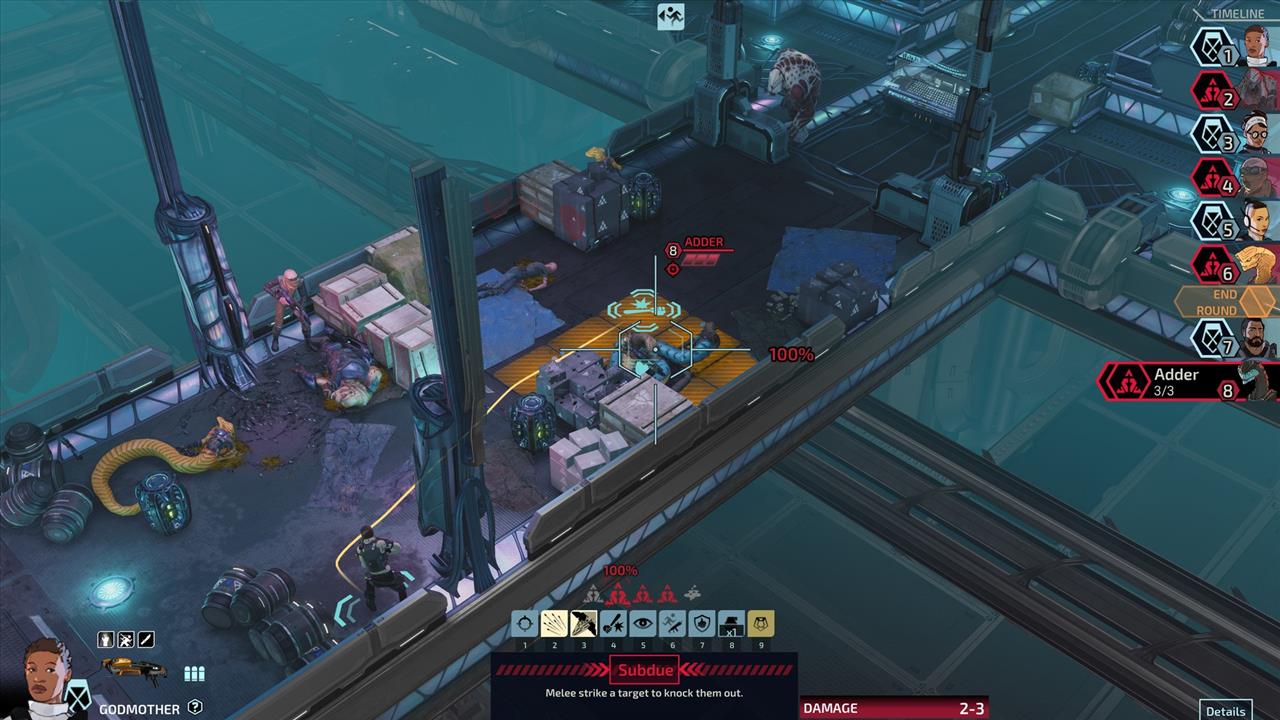 They say success is a great deodorant. That’s what pulling a win feels like after completing these chapters. There was the satisfaction of a job well done, resignation that there wasn’t some expensive CGI cutscene to celebrate it, and acknowledgment that the city’s unrest would get worse before it got better. I had more work to do. And knowing there was more work to do felt just fine.

Chimera Squad gives XCOM something it needed a lot more of: direction. The stakes are lower, but the execution is smoother.