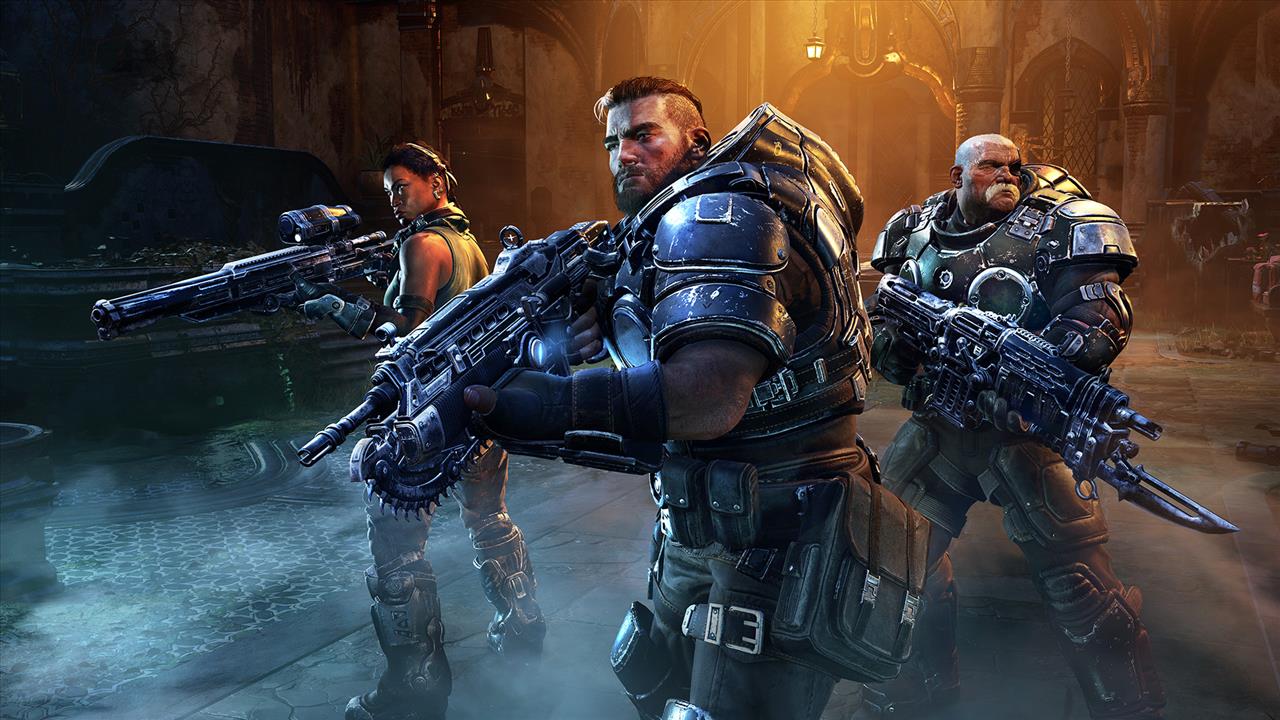 It’s been 13 years since the original Gears of War hit the Xbox 360. Over the years players have taken on the role of a few of the soldiers of the Coalition of Ordered Governments (COG) to battle against a horde of creatures known as the Locust. The Gears of War franchise--now known as just Gears--has been widely popular and has seen a few sequels, a prequel, and a spinoff which is a mobile game where the characters are Funko Pop figures. The newest entry into the series, though, is also a spinoff…and another prequel…and isn’t a first-person shooter. It’s also a genre I’ve never played before and, as I’ve not had a lot of experiences with the Gears franchise until now, I’m really marking off a few things on the gaming check list.

Gears Tactics is a prequel to the original Gears of War and focuses on a soldier named Gabe Diaz, the father of Kait Diaz from Gears 5. Everything was peaceful after years of war until a new type of creature began to invade known as the Locust. Chairman Prescott has ordered a full planetary strike in order to wipe out the threat. Gabe is joined by Sid Redburn and they head out to the CIC to receive some classified information. That info is a mission from Prescott himself to take down a Locust named Ukkon. Ukkon is a geneticist who created various monsters such as Corpersers and Brumarks. To take down Ukkon, Gabe says he’ll need equipment and basically an army. However, Prescott leaves that up to Gabe, so now he and Sid need to do a bit of recruitment if they have any hopes of taking down Ukkon and the Locust.

Gears Tactics can be played on four difficulties ranging from Beginner to Insane with even an Iron Man option you can toggle to make things even more difficult by removing the option to reload from your last checkpoint. Beginner allows players to enjoy the story more by having enemies being easier to deal with and is a good option for players who have never played a tactical-style game before. You can change the difficulty through the settings menu once you’re in the game if you find the current difficulty too easy or you want more of a challenge. 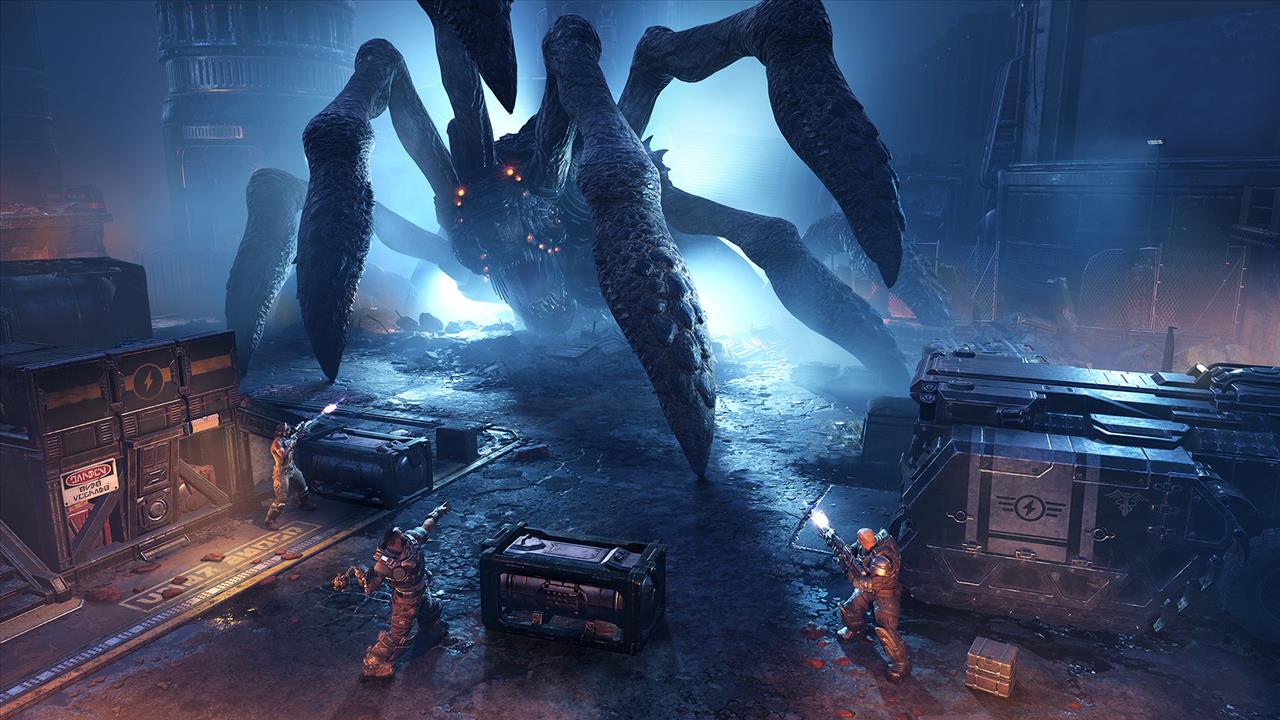 That said, Gears Tactics is a tactical shooter where instead of running around like a madman shooting every Locust in sight, each soldier has a certain number of action points they can use each turn to move, attack enemies, reload their weapon, or other various actions. While other tactical games restrict movement to a grid, Gears Tactics let you move units wherever you wish within the confines of their movement range and remaining action points. Units have two primary weapons, a grenade, and various abilities depending on their class.

One ability that each unit has is called Overwatch and it allows you to use your remaining action points to basically keep watch over a certain space in front of you. Any enemies that move in that space will be fired upon provided your current weapon has a shot left in it. Enemies can also use Overwatch but you can use a Disabling Shot to disable their Overwatch provided you actually hit the enemy. Your chance of hitting the enemy all depends on where they are in relation to you, any obstructions between you, and if they’re at a different elevation to you. Other abilities can differ between units such as charging in a straight line and finishing off enemies immediately, being able to move further than normal, finishing off downed enemies with a chainsaw, and more. Keep in mind that these can either cost action points or just end your turn entirely, plus they’ll normally have a cool down period so you have to pick your spots when using these abilities. 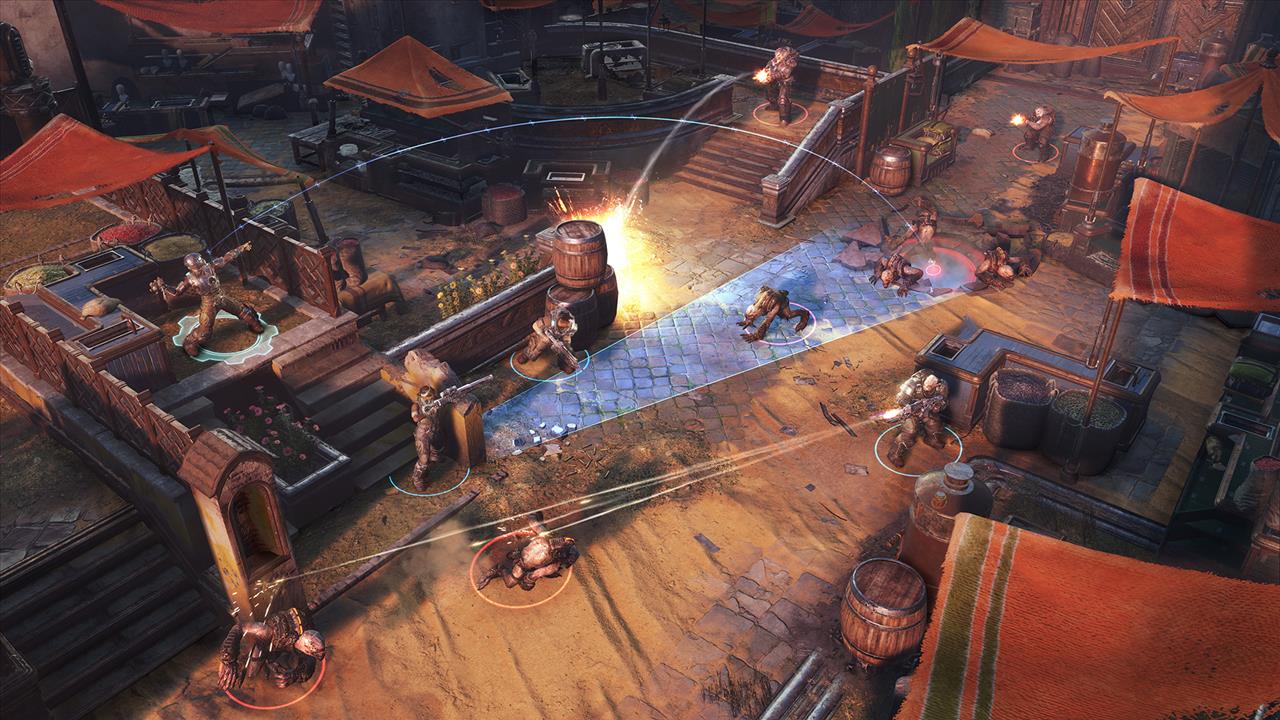 The enemies themselves should be familiar to Gears veterans and all have their own unique traits and abilities. Throughout the game you’ll encounter enemies that attack when you get in close, enemies that will attack you when you move away from them, and even snipers that can pin down one of your units--meaning you can’t do anything with them until the threat is taken care of or that unit will get shot at. To take care of these threats you can freely swap between your units and use their action points in any order, meaning you don’t have to exhaust one unit’s points before switching to another. This will come in handy throughout the campaign and especially with the bosses.

As is custom with a Gears game, large epic boss battles are a thing here as well, and you can’t just run up to them guns a-blazing unless you have a death wish. The bosses will require tactical strategy to take down. The first boss for example, the Brumak, has three tanks on his back that are his weak points. Every time one is shot he’ll turn to face whoever shot it. The battle requires you to basically flank him with your four units, but also keeping in mind that other enemies will start to appear after a couple of rounds and the Brumak can easily corner someone and stomp all over them if you’re not careful. He’ll also fire off missiles that will land in designated locations after the following round. 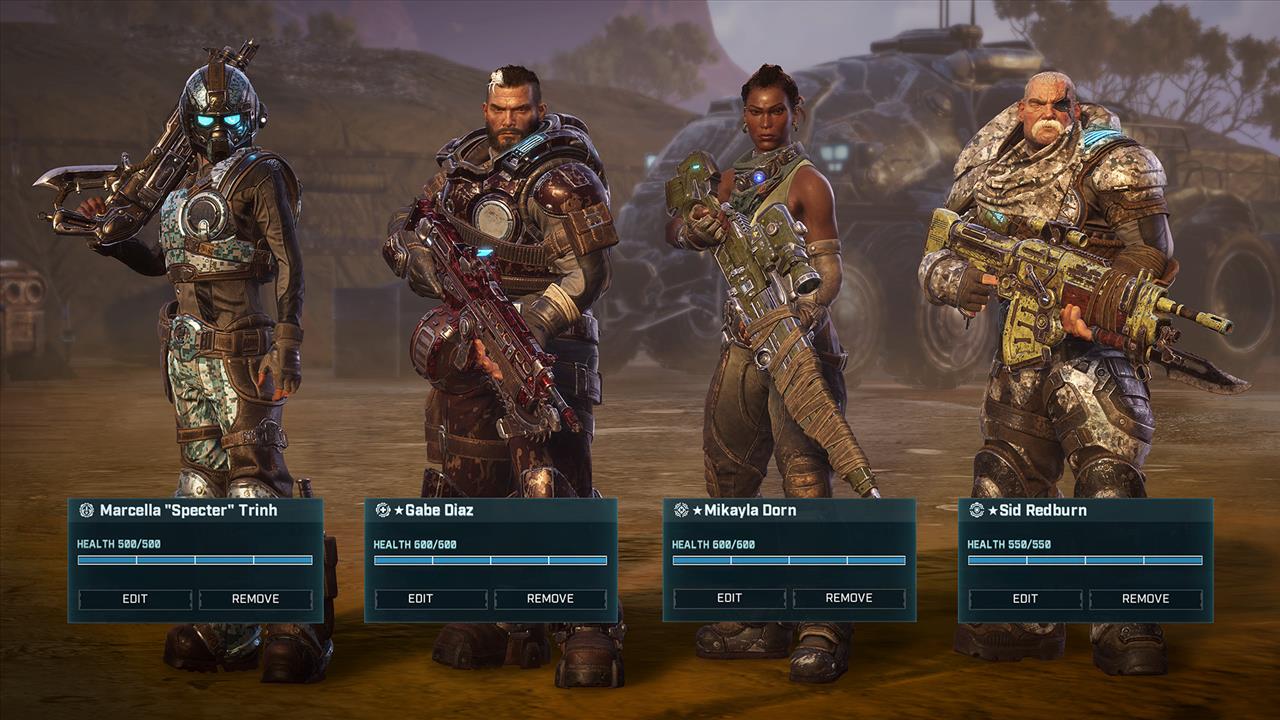 That’s one thing I enjoy about the game. Not just the boss battles, but the fact that it can be very easy to get overwhelmed if you’re not prepared. On easier difficulties you may get a feeling of near invincibility as you mow down enemies in the early going. However, the tide can turn rather quickly and your near-invincible squad can suddenly be surrounded and under heavy fire with nowhere to turn. You have to play strategically at all times, especially once the first several chapters are done.

Between chapters you’re taken the barracks where you can open any loot cases you picked up in a prior chapter, arrange equipment on your units, and basically prepare a strategy for the next mission. Each unit class has various pieces of equipment they can use and some equipment can be used by anyone. Each piece of gear has certain stat gains and abilities they can grant a unit. Furthermore your units will gain experience after each mission they take part in and after so much experience they’ll level up. Leveling up will give them a couple of skill points they can invest in various skills based on their class. Each class has four paths they can go through on their tree. Do you want a support unit to focus mainly on healing, or maybe get in on the fights a bit and still heal, but to a lesser effect? Do you want your heavy unit to help defend other units or go on an all out destruction spree? With each unit having multiple skill tree paths and the different stat gains on their armor, you can basically make any unit however you wish within their class and you should be able to gain enough experience and skill points to max out or nearly max out two of the trees. You’ll also have occasional side missions to take on where you have to complete a certain number of them to continue to the next chapter in the story. Each unit can only go on one side mission in a chapter so if you have to complete multiple side missions, think carefully who you want to take in, though this is a good way to help lower-leveled units get some more experience. 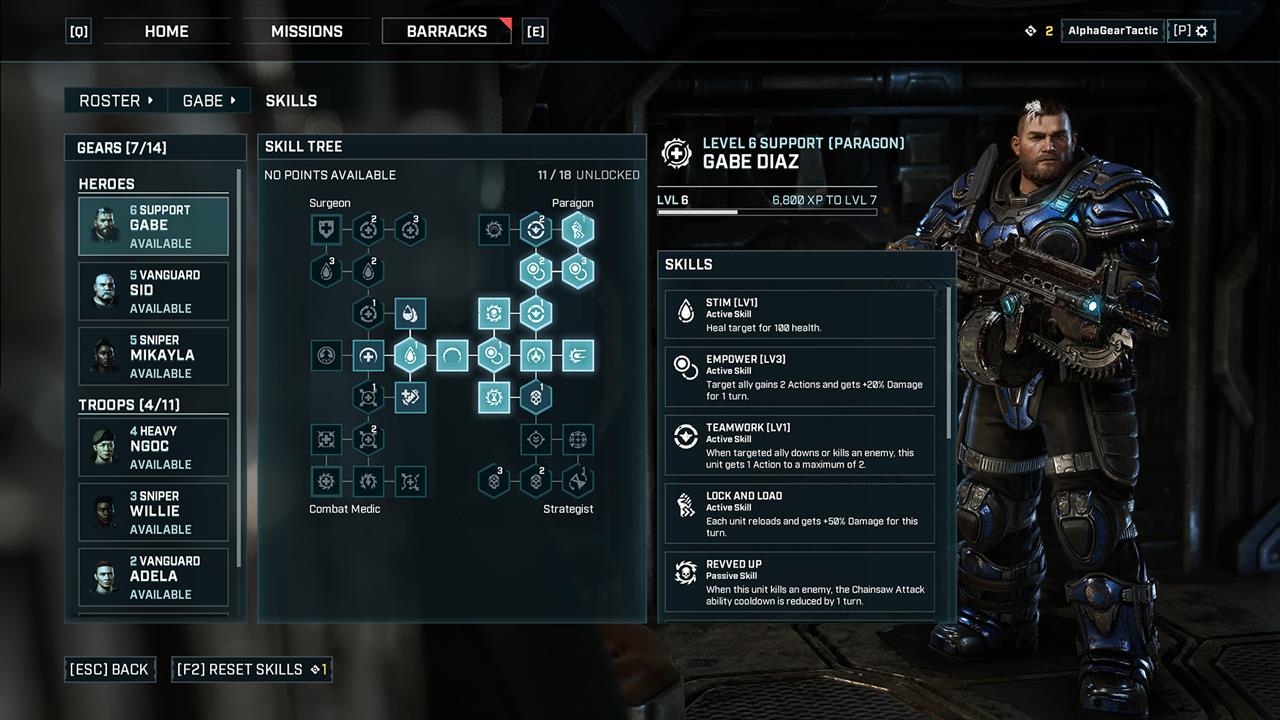 I was a little nervous going into this as I’ve never played a tactical-style game before and my experience with the Gears franchise is playing a bit of the original game. However, I enjoyed Gears Tactics. In terms of presentation the game looks and controls great. You can rotate the camera 360 degrees to get a good idea of how to plan each move and where enemies are. The cutscenes are nice and the voice acting was well done, with some of my favorite moments being the interaction between Gabe and Sid.

My main nitpick is that at times I’d clear out all enemies currently attacking and start moving towards the goal. I get close enough another wave of enemies would appear behind us and move in. The problem is that I’m completely out in the open at this point and end up taking heavy fire. If I had known this could happen I’d have left at least two units behind cover just in case but there’s no telling when the next wave of enemies will come if there are any left. 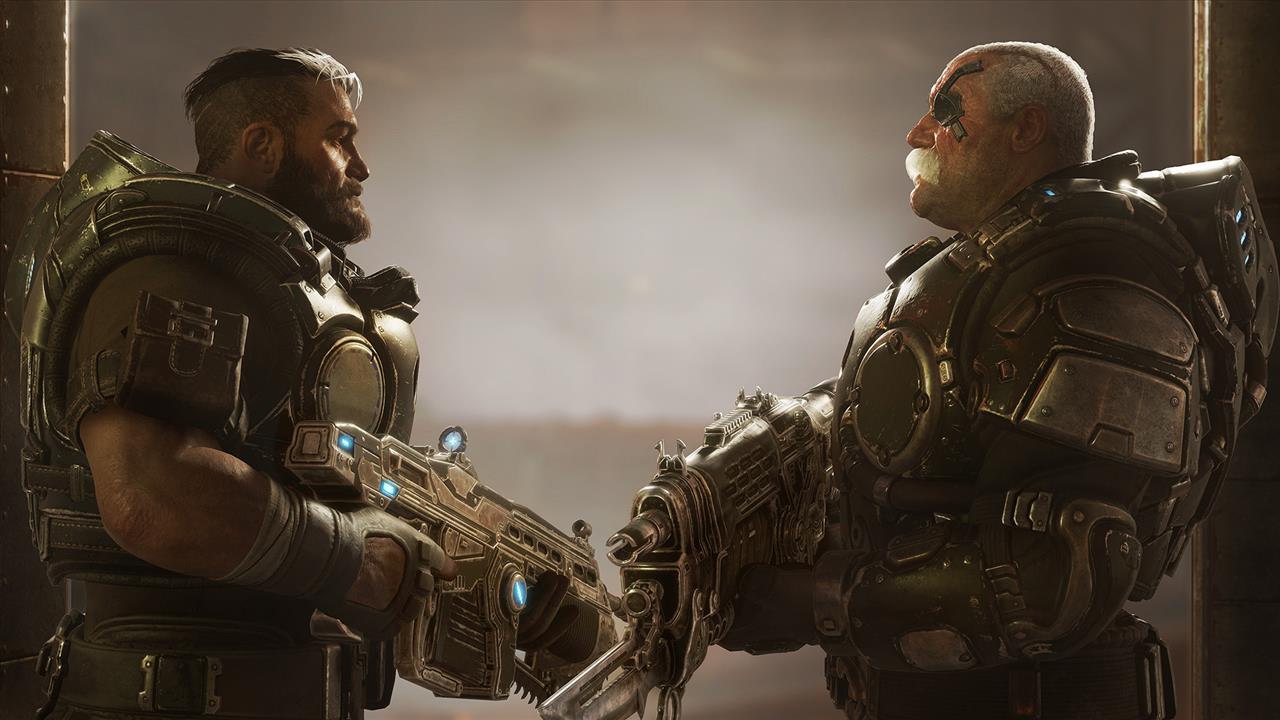 If you’re a fan of the Gears franchise and want to try something a bit different, or if you’re a fan of tactical-style games, You’ll likely enjoy Gears Tactics. I went into this review having never played a tactical-style game and, while they’re still not my best genre, this has made me more curious to check out other games in this style as well as the rest of the Gears franchise.