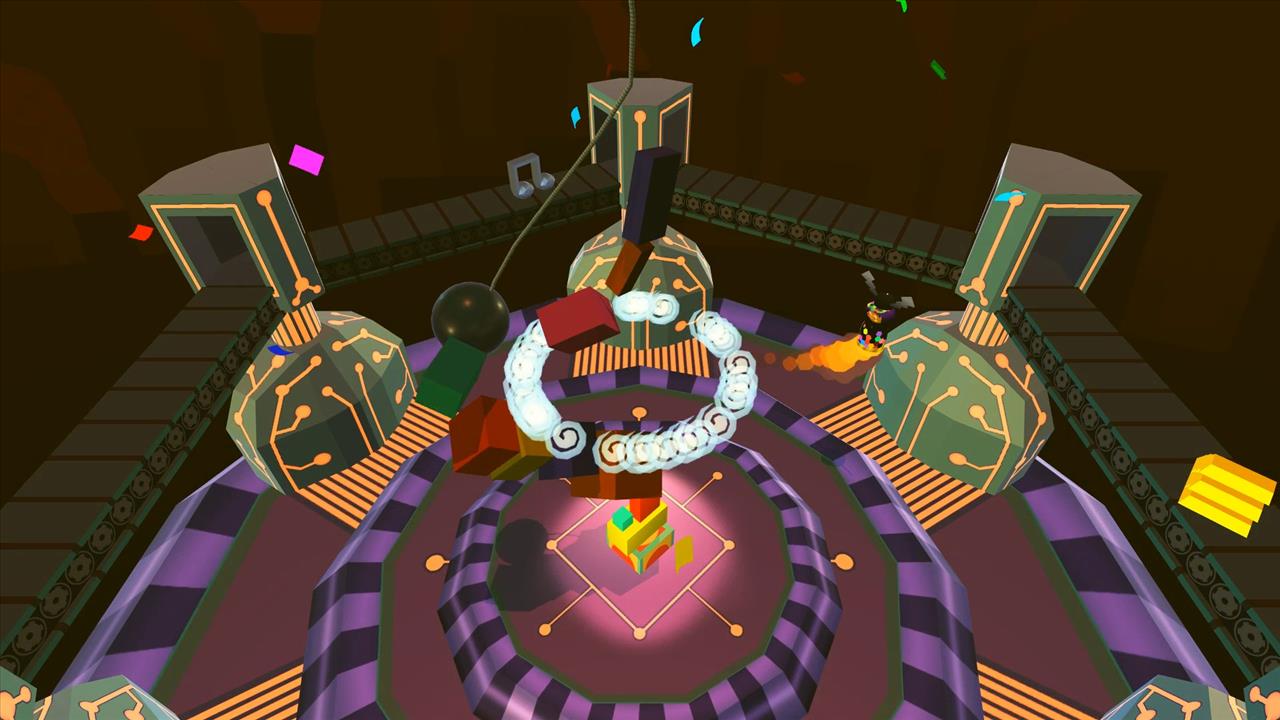 Ian Sundstrom is a game designer, artist, and programmer – all rolled into one. As the founder of Herringbone Games, he began developing games in the early 2010s. After finding some success with itch.io games and releasing a mobile puzzle title, Sundstrom began working on Stacks On Stacks (On Stacks).

Stacks On Stacks (On Stacks) has been in development for a while, and I was able to play an early build of the game at GDEX 2018. In the time since then, Sundstrom has added tons of structure to the game, adding comic book-style art, delightful cartoony characters, and giving players an avatar character to earn cosmetics for. There is a new Mario-style overworld to explore, and with the puzzles grouped together in little islands. What was a strong demo in 2018 is now a game.

Stacks On Stacks (On Stacks) involves the player stacking slowly falling bricks. This might sound familiar, but this game is 3D, and the bricks come in a number of sizes as well as shapes. The physics involved can be challenging, to say the least. 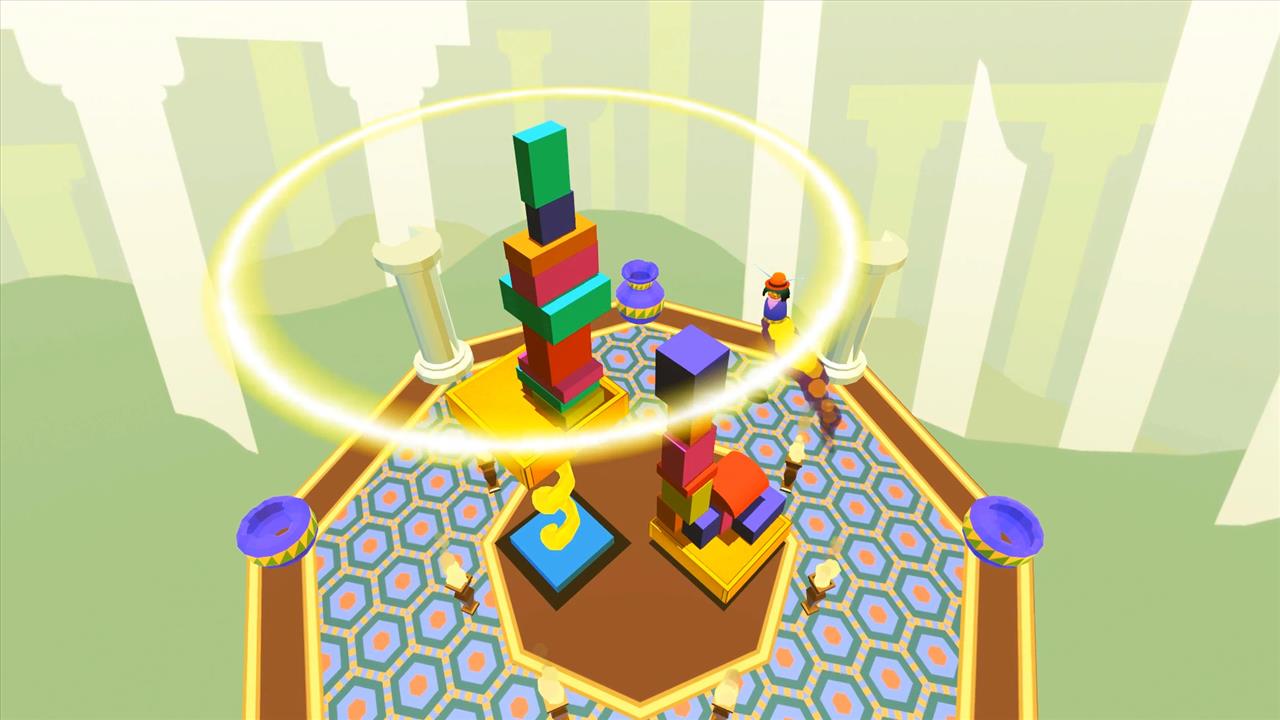 Stacks came flying into the public eye when it was announced with a small group of indies as being part of the “First On Stadia” program. Then, a few weeks later, Stacks on Stacks was announced as being one of the “Free with Pro” games for April. Starting today, anyone with a Stadia Pro membership can snag a copy of Stacks On Stacks (On Stacks) for free and play to their heart’s content.

Even with his busy schedule, Ian Sundstrom took a few minutes to answer some questions for Gaming Nexus about his career in gaming, the development of Stacks On Stacks (On Stacks), and the future of streaming in games.

Please tell us a little bit about yourself, and your history in the game's industry.

I’ve been an indie developer for about seven years, based in Bloomington, Indiana. Five years ago, I launched Sature, a strategy board game of color for mobile devices. Stacks On Stacks (On Stacks) is my second self-published title. 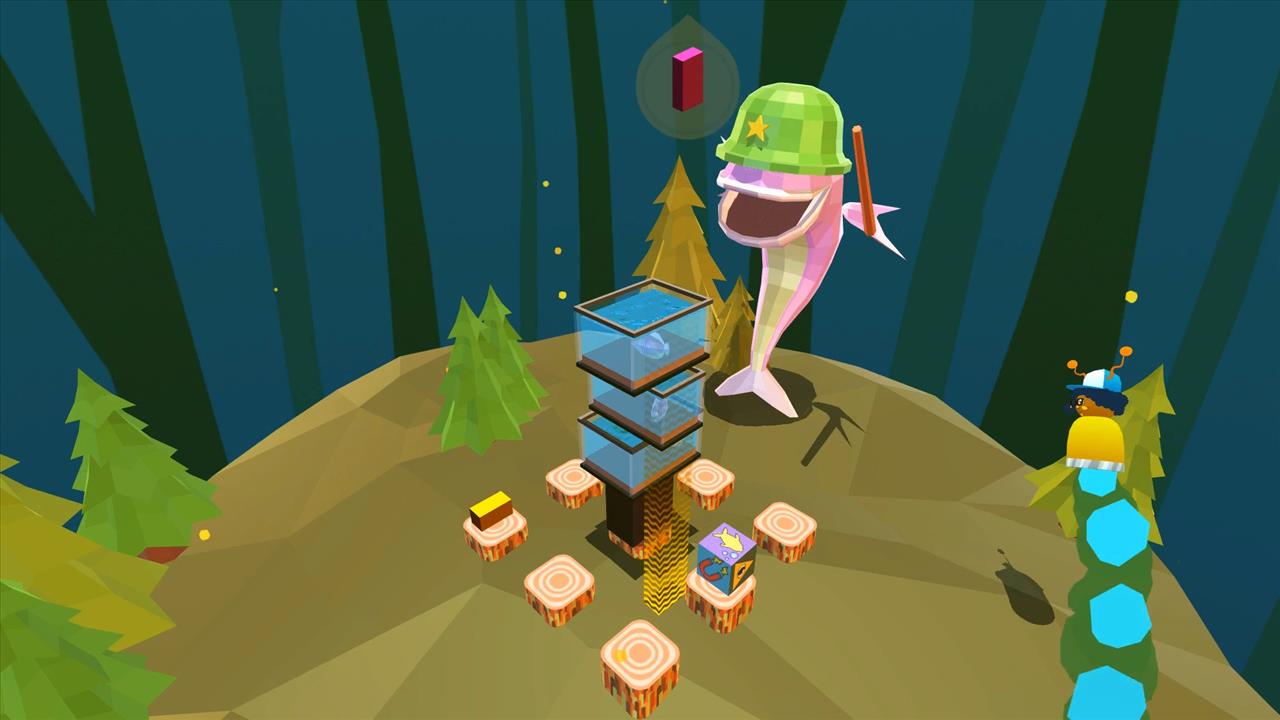 Is Herringbone Games a one-man show? Were you the sole developer on Stacks on Stacks (on Stacks)?

Currently, I’m wrapping up the development alone, but Herringbone Games subcontracts others for things like sound and music, localization, or making trailers. So, I’m not a fully solo developer, but I do wear a lot of hats such as programming, art, and the business side of things.

Why "Herringbone Games"? Is there a story behind the name?

Only that I think herringbone is a cool pattern and it sounds classy.

I first played Stacks on Stacks (on Stacks) at GDEX 2018. How has your experience been at regional gaming shows? Is there a Midwest gaming "scene"?

While most Midwest events are smaller than the large coastal game expos, they have been really good for playtesting feedback and networking with other developers from Indiana, Kentucky, Ohio, and Illinois. There are definitely scenes all across the Midwest. We all try to support each other by sharing our experiences and advice. 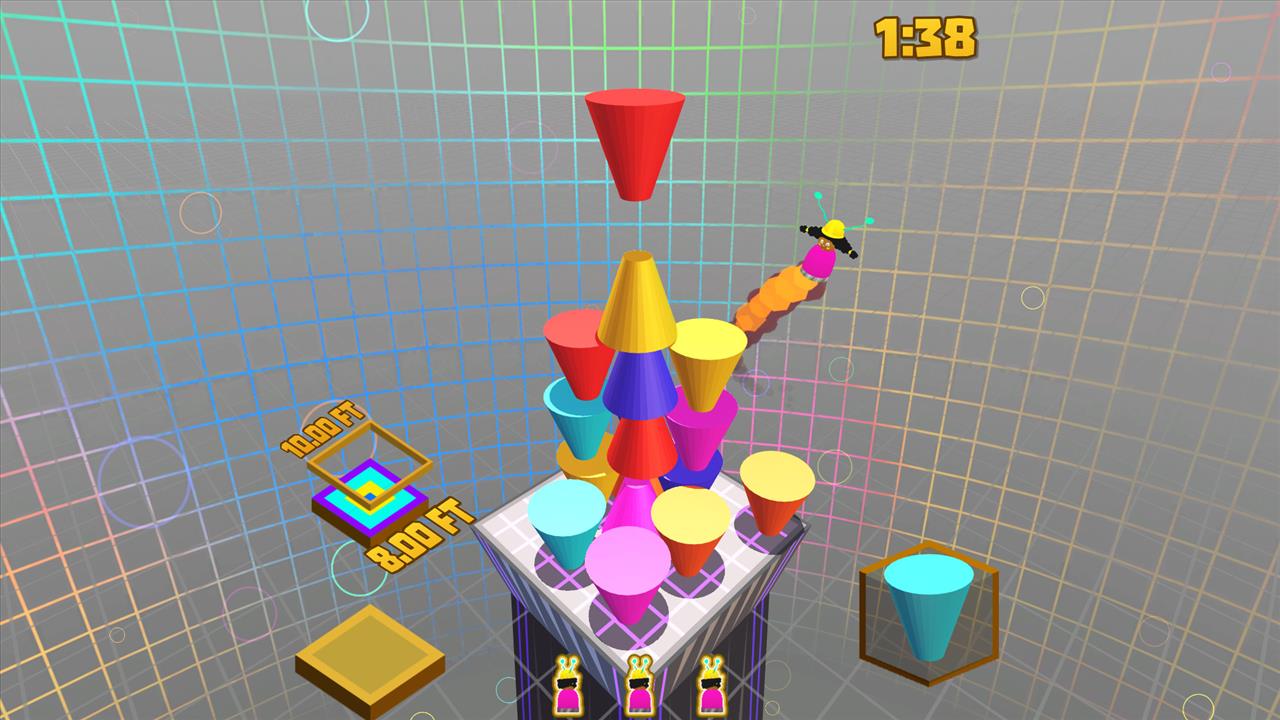 How long have you been in development on Stacks on Stacks (on Stacks)? How many iterations has the game had at this point?

A little more than five years, but not always working full time on it.

What was the inspiration for Stacks on Stacks (on Stacks)? How did you come up with the idea?

The local Bloomington indie devs were trying to build our own arcade box. I started making a prototype for a small game to put in the box that was themed around city construction. When I realized how fun the prototype was I decided to pursue making it into a full game.

Stacks on Stacks (on Stacks) is extremely family friendly - yet the difficulty ramps up nicely. Was there a temptation to tune the game to be easier for little kids? I'm glad you didn't - just curious.

No, not really. I never intentionally made the game targeting a family audience. However, I didn’t want to make it exclusionary in any way either. So, there’s no gratuitous violence or adult themes.

Perhaps my desire to keep difficulty in the game comes from growing up playing DOS and NES/SNES games as a kid. Many of those older games were really hard, but that didn’t stop me from enjoying them despite being young! I personally think that if a game of this type isn’t somewhat challenging there’s not going to be any growth that comes out of it for the player, whether that’s a child or an adult.

At the same time, Stacks does have many different ways to lower difficulty if you find you aren’t enjoying it. There are accessibility options for slowing the speed the bricks drop and you can also turn on invincibility. Another option is to team up with your child in co-op to help them through the stages. Although at expos it’s just as often the reverse with the child carrying the team.

How long did it take you to settle on all the iterations of the puzzle system? Any interesting stories about times that inspiration struck?

The core of the game of stacking falling bricks was established immediately. There were two big changes that I begrudgingly added after hearing people ask for them over and over. The first is that the game used to have movement on isometric axes, which was just awful for anyone that hadn’t played isometric games. The second is that originally it wasn’t possible to rotate the bricks, but people kept asking for it over and over expecting the game to act like Tetris.

I was stubborn for pretentious design reasons for why I thought the game worked better how it was. In both cases, when I finally gave in and added each of these changes the core of the game wasn’t affected all that much and people had a much better time playing it. You've got to listen to feedback! 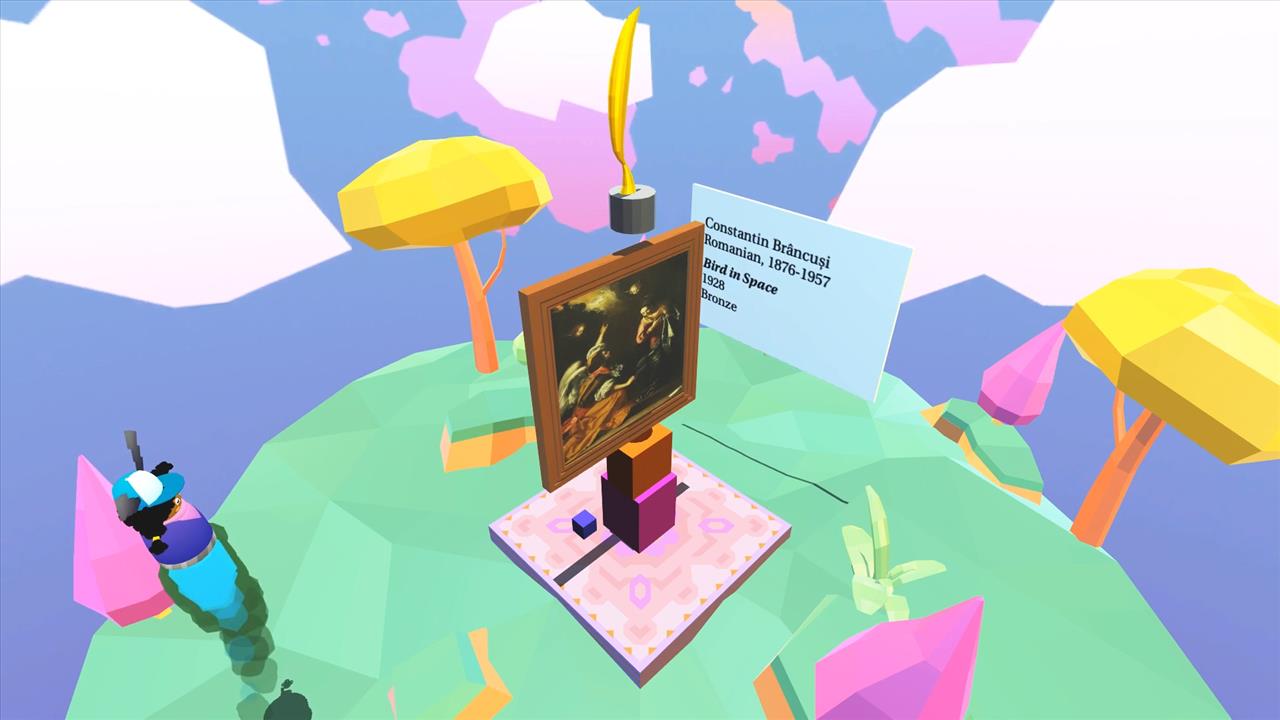 Stacks on Stacks (on Stacks) is part of the first wave of indies to be released "First on Stadia." That is a very unique position to be in at this point in Stadia's life. How did that come about?

I was demoing Stacks in the Indie Megabooth at PAX East 2019 in Boston and folks from the Stadia team saw the game. They reached out to me afterward. It’s been awesome working with them to bring the game to the platform!

There is a sub-section of Stadia fans that seem to think that just because the platform can run super high-end games, that there is no room for indies. How do you feel about that?

I think any healthy platform is going to offer an ecosystem of games for a wide variety of audiences. I understand that not everyone is interested in indie games, but for others, it adds a lot of value to have a game like Stacks to play.

In my experience, Stadia has been extremely impressive. How do you feel about the future of streaming in games?

I think it’s exciting. I hope it makes playing more accessible to an even wider audience. Whether that’s a gamer trying to get back into the hobby after not being able to keep up with the newest generation of hardware or someone completely new to games.

What does the future hold for Herringbone Games? Beyond Stacks on Stacks (on Stacks), are there any projects on the horizon?

Nothing announced as of now. I have lots of new prototypes I would like to explore. Feeling both ecstatic and humbled that I get to keep on making games!

Gaming Nexus would like to thank Ian Sundstrom for his participation in this interview. Stacks on Stacks (On Stacks) is now available in the Stadia Store.